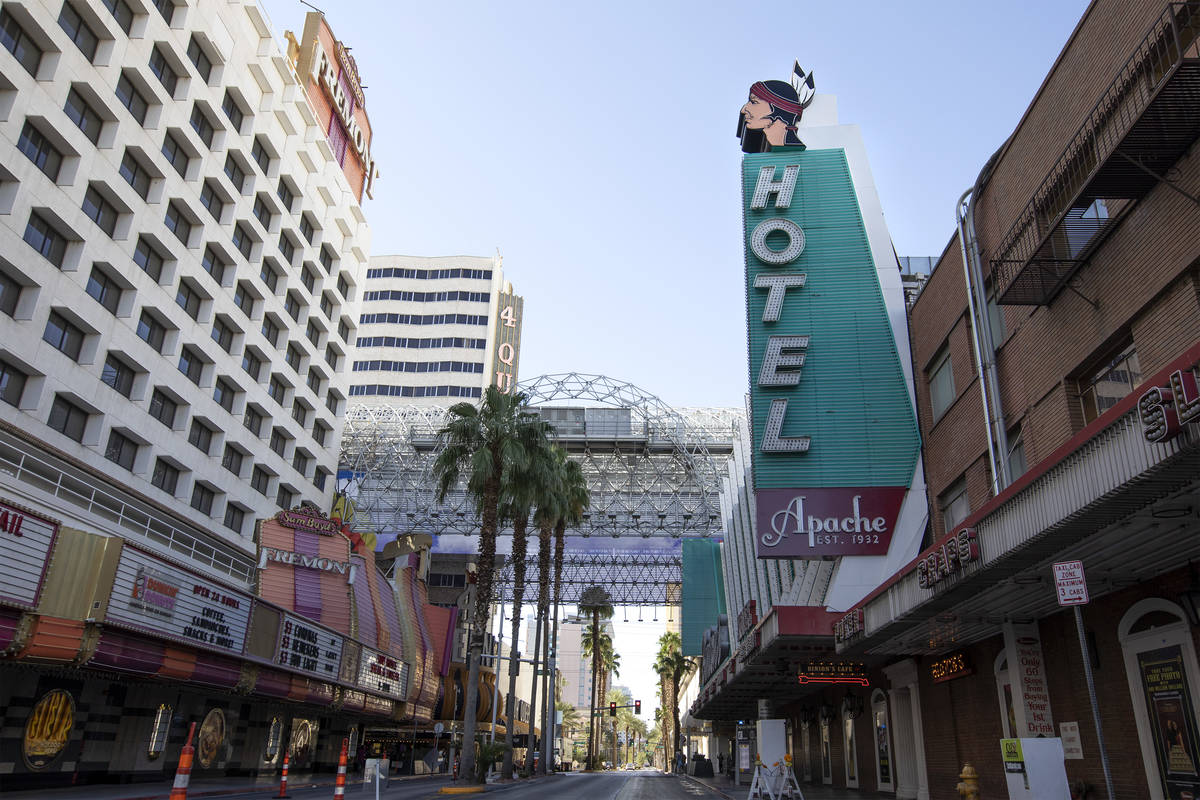 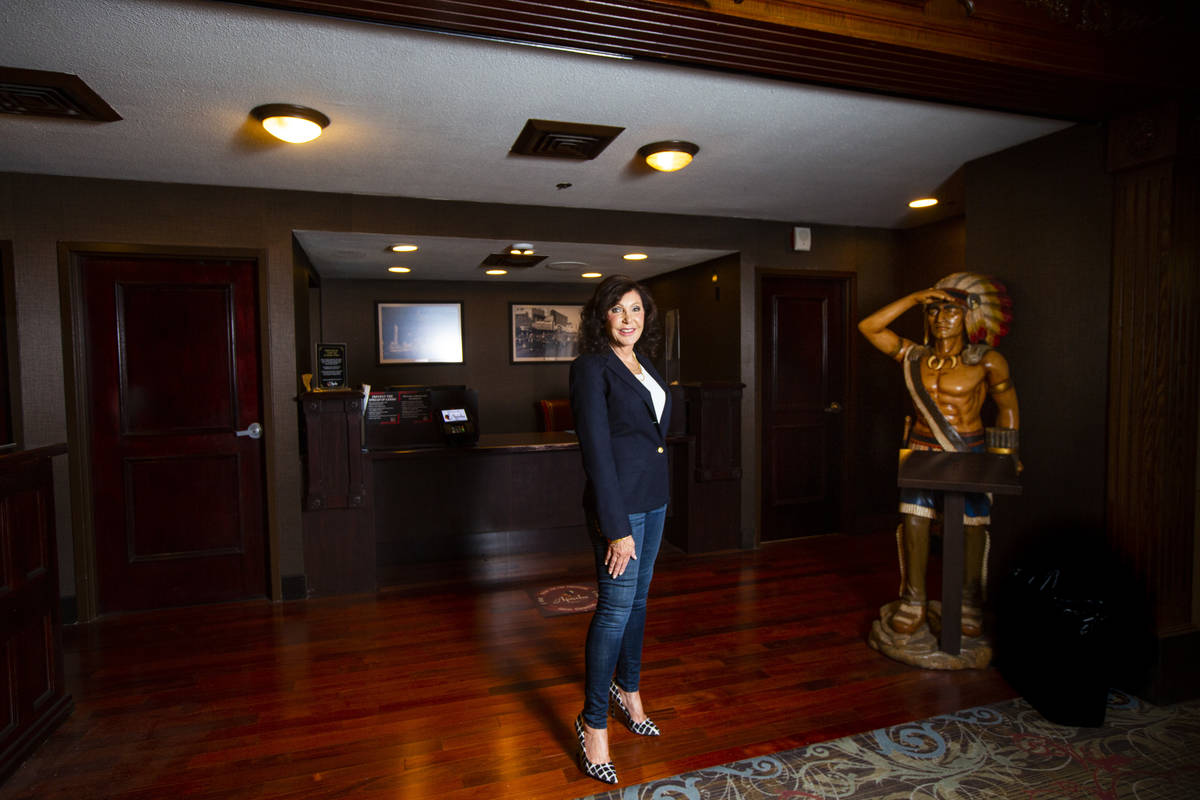 Gina Silvagni Perry, the granddaughter of P.O. Silvagni, who opened Hotel Apache in 1932, stands near the check-in desk of the hotel at Binion's in downtown Las Vegas on Friday, Sept. 11, 2020. The historic building at 128 E. Fremont St. has remained in the Silvagni family under a lease agreement to this day. (Chase Stevens/Las Vegas Review-Journal) @csstevensphoto 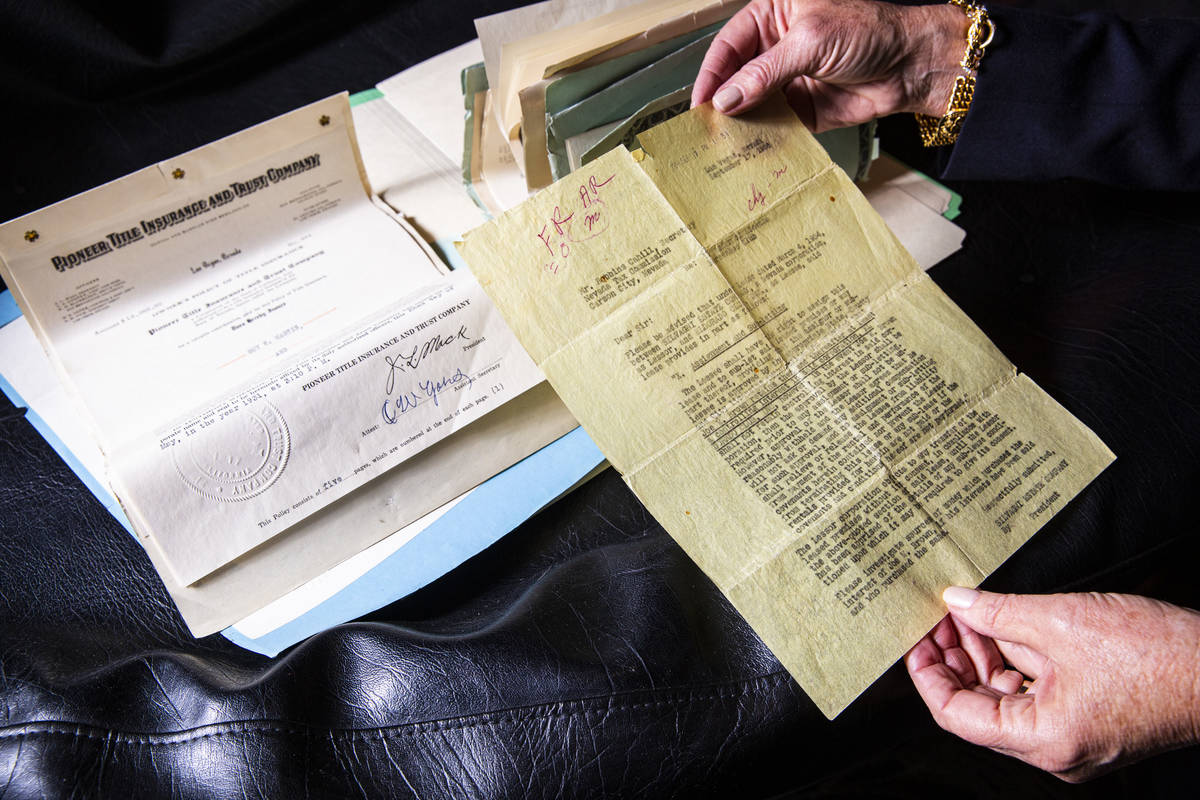 Gina Silvagni Perry, granddaughter of P.O. Silvagni, who opened Hotel Apache in 1932, shows a lease agreement for the former El Dorado Club at Binion's in downtown Las Vegas on Friday, Sept. 11, 2020. The historic building at 128 E. Fremont St. has remained in the Silvagni family under a lease agreement to this day. (Chase Stevens/Las Vegas Review-Journal) @csstevensphoto 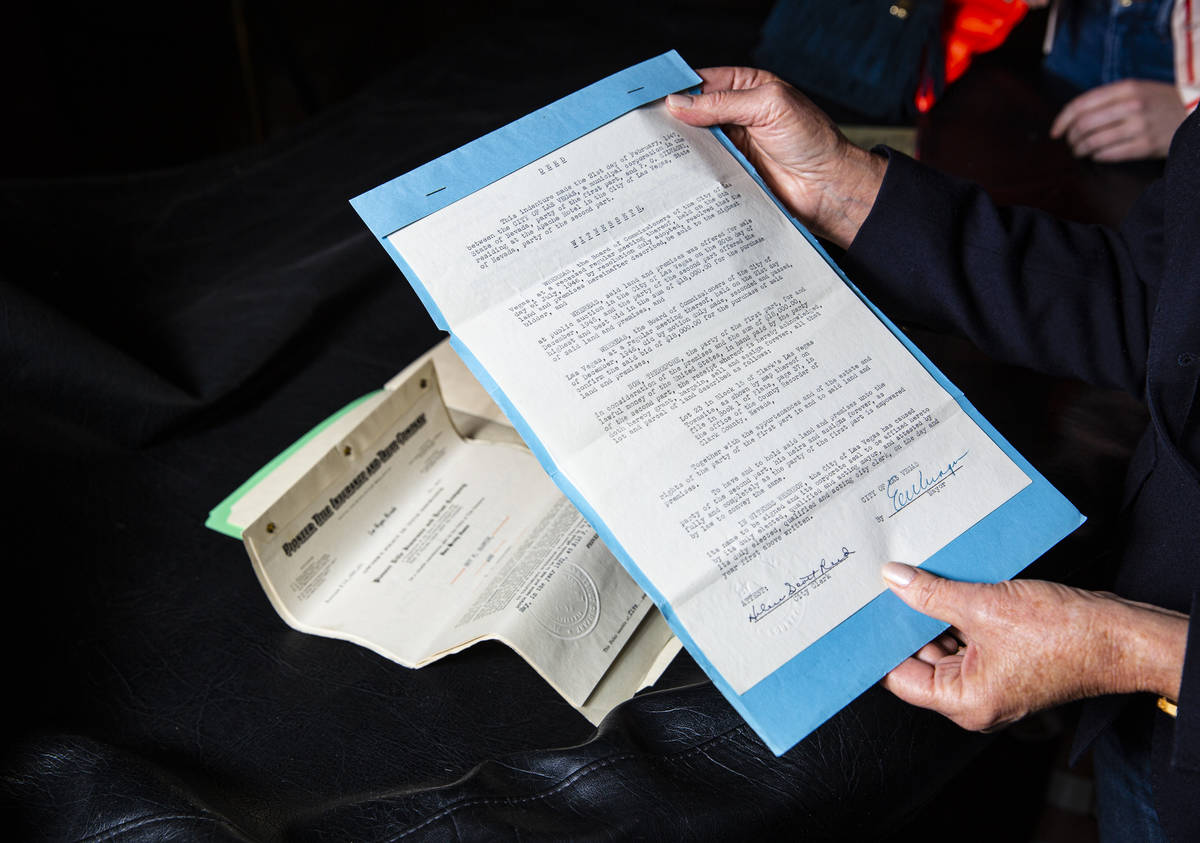 Gina Silvagni Perry, granddaughter of P.O. Silvagni, who opened Hotel Apache in 1932, shows a land deed at Binion's in downtown Las Vegas on Friday, Sept. 11, 2020. The historic building at 128 E. Fremont St. has remained in the Silvagni family under a lease agreement to this day. (Chase Stevens/Las Vegas Review-Journal) @csstevensphoto 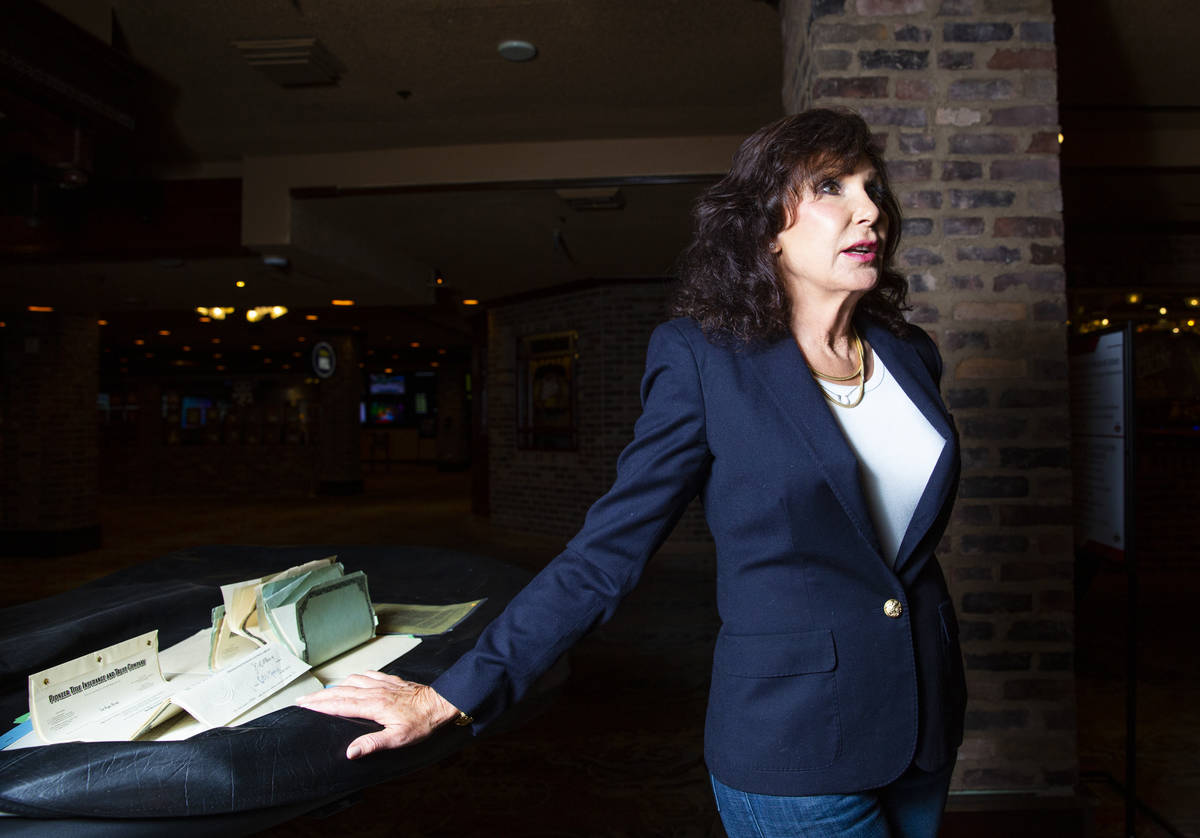 Gina Silvagni Perry, granddaughter of P.O. Silvagni, who opened Hotel Apache in 1932, stands by historic documents relating to the land purchase near the check-in desk of the hotel at Binion's in Las Vegas on Friday, Sept. 11, 2020. The historic building at 128 E. Fremont St. has remained in the Silvagni family under a lease agreement to this day. (Chase Stevens/Las Vegas Review-Journal) @csstevensphoto 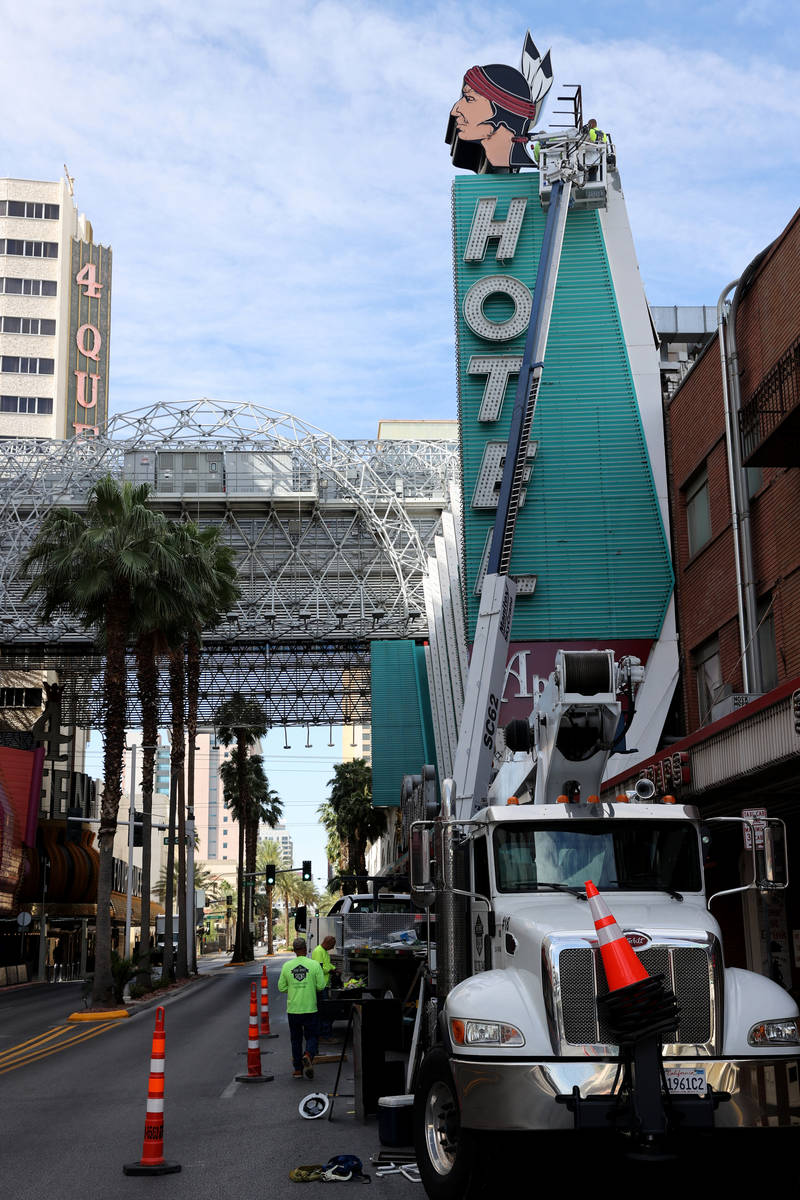 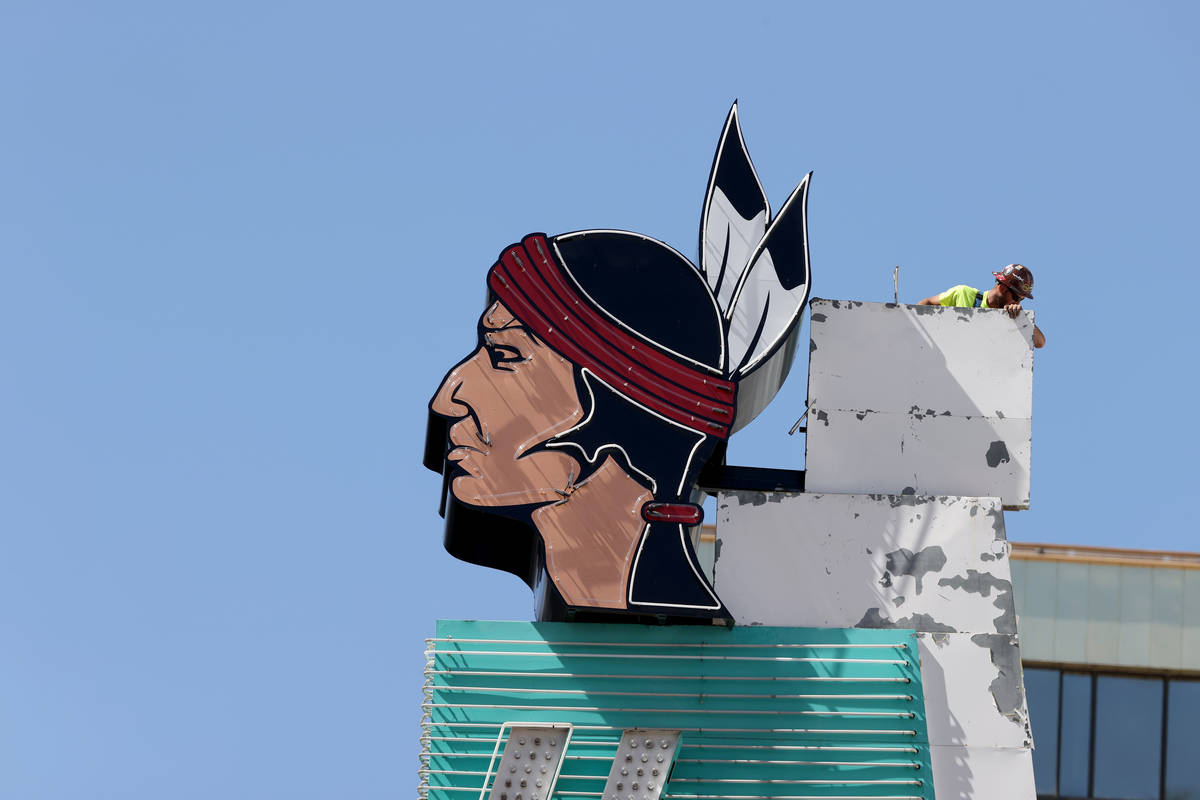 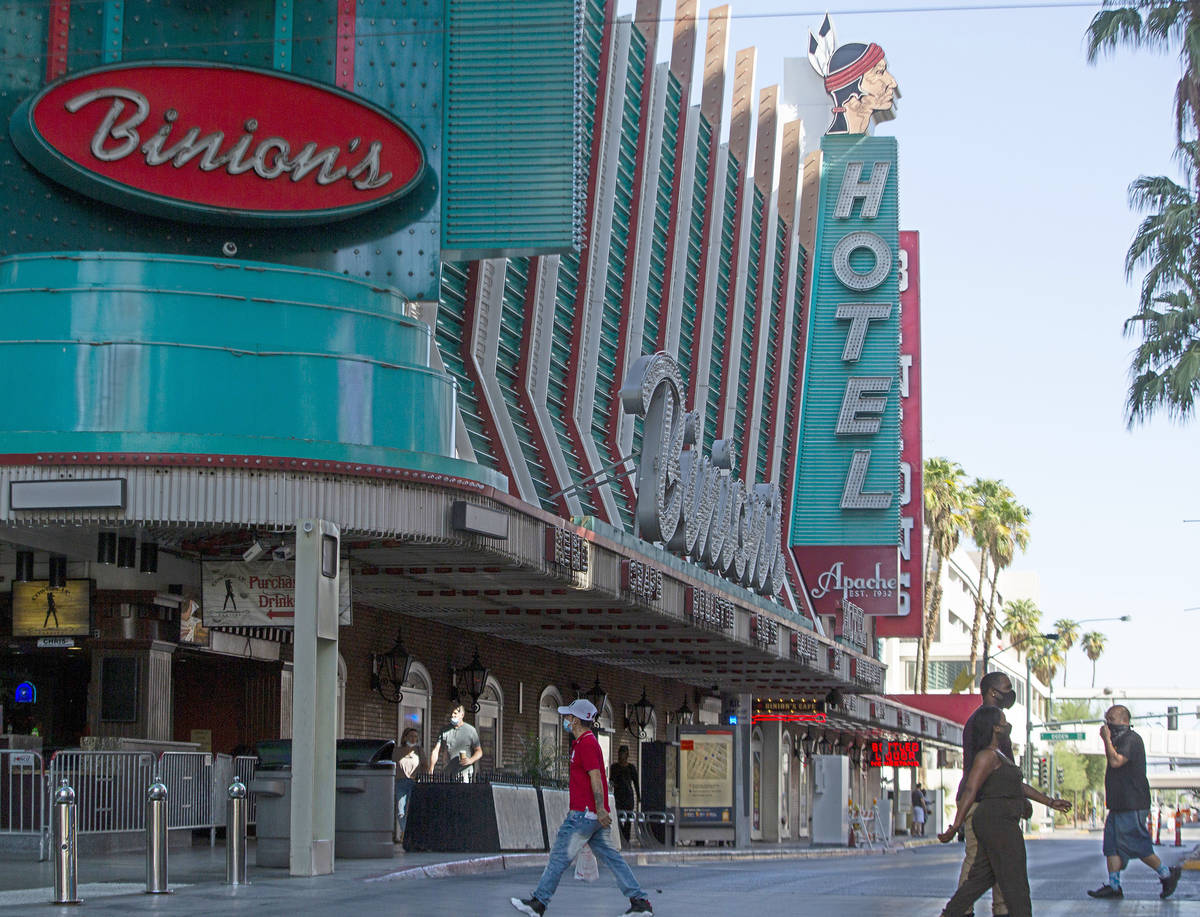 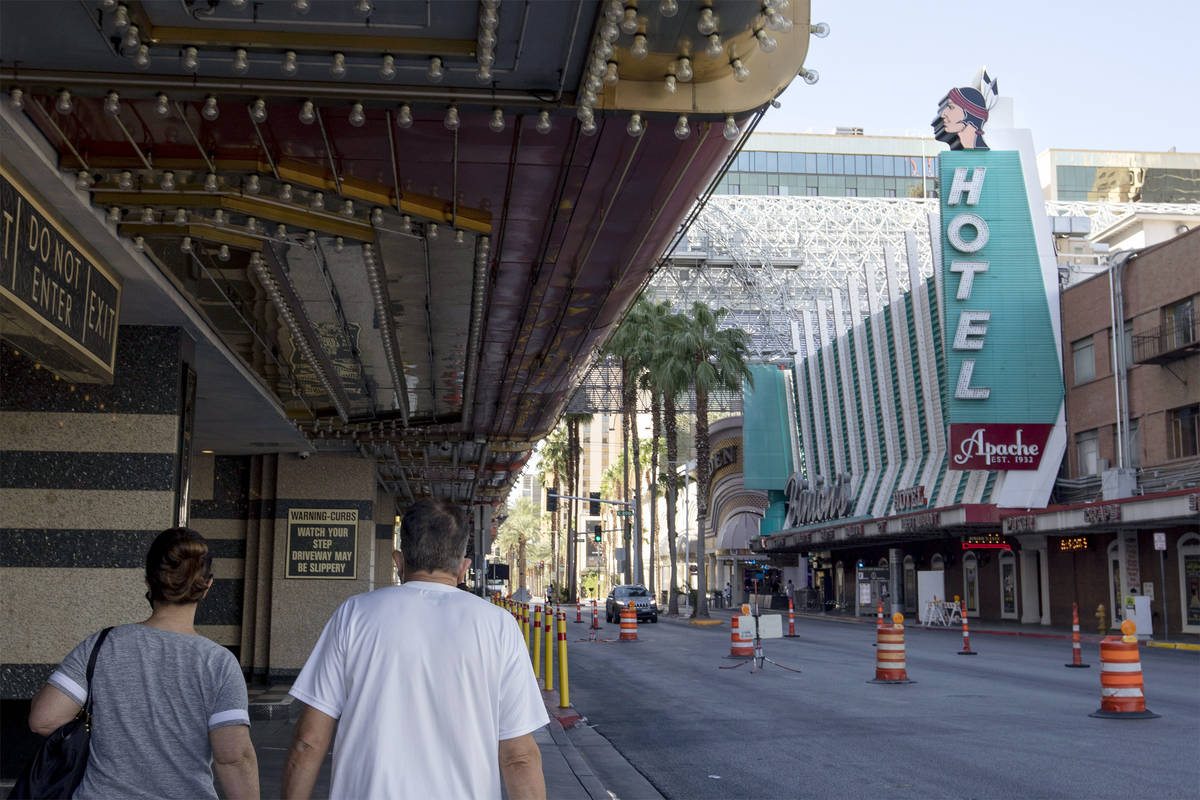 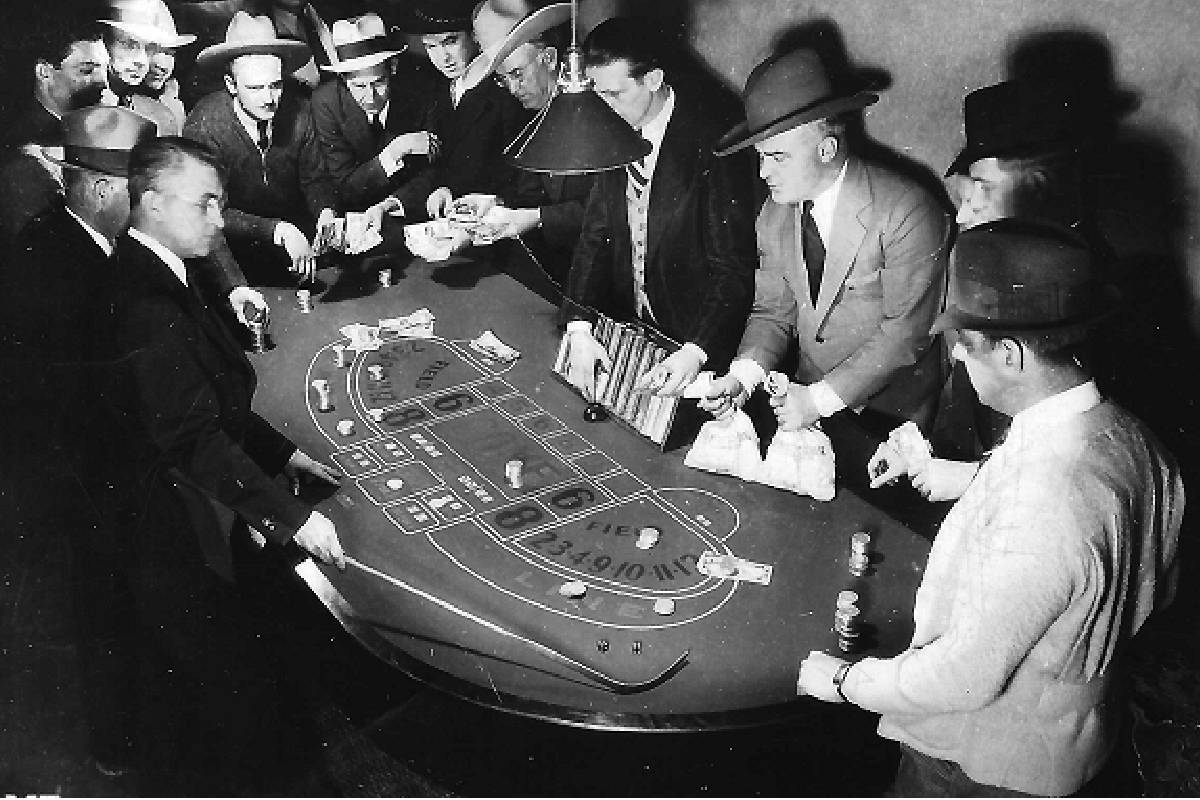 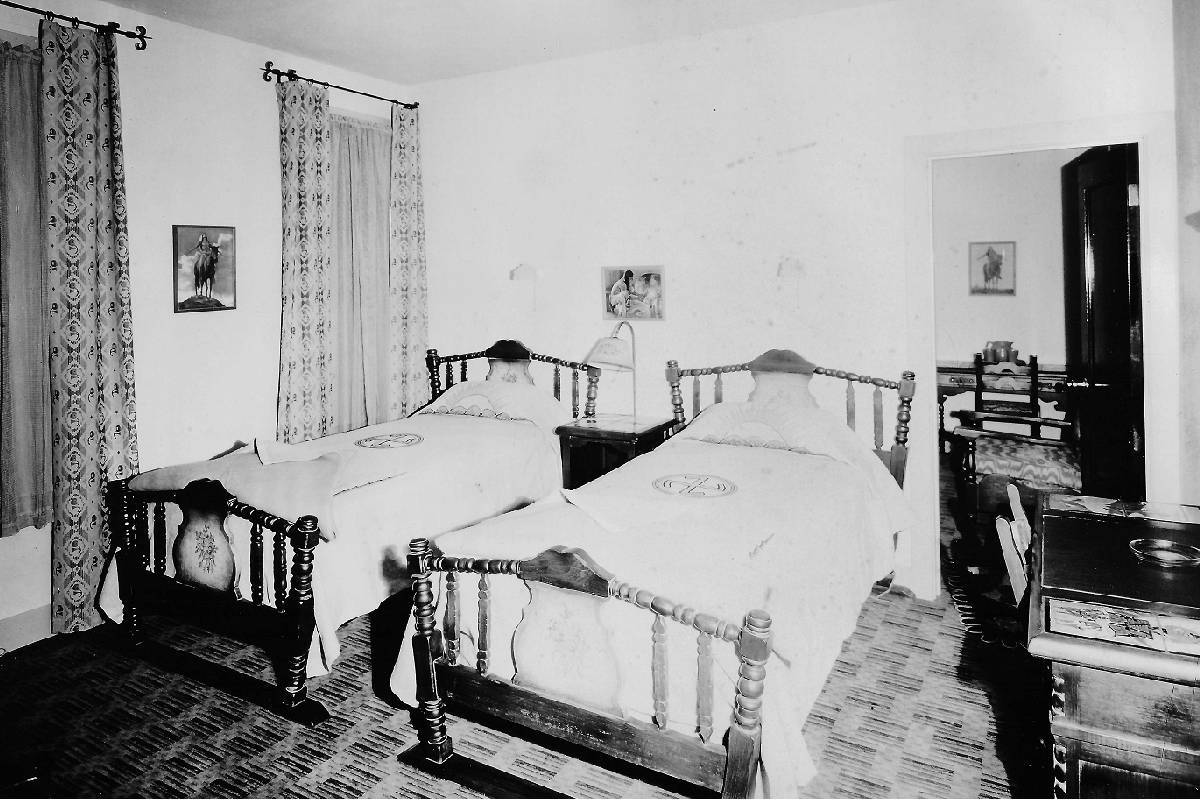 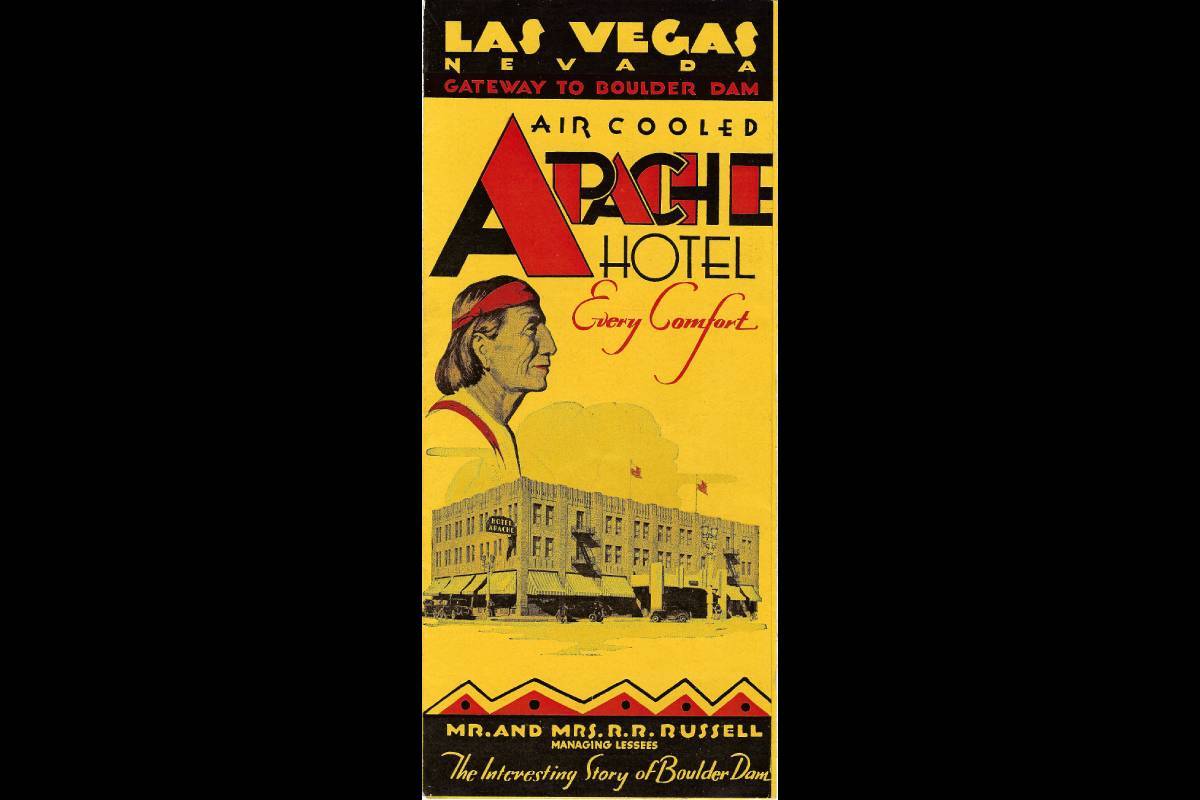 The front of a brochure for the Apache hotel, advertising "every comfort." (Courtesy, Robert Stoldal Collection.) 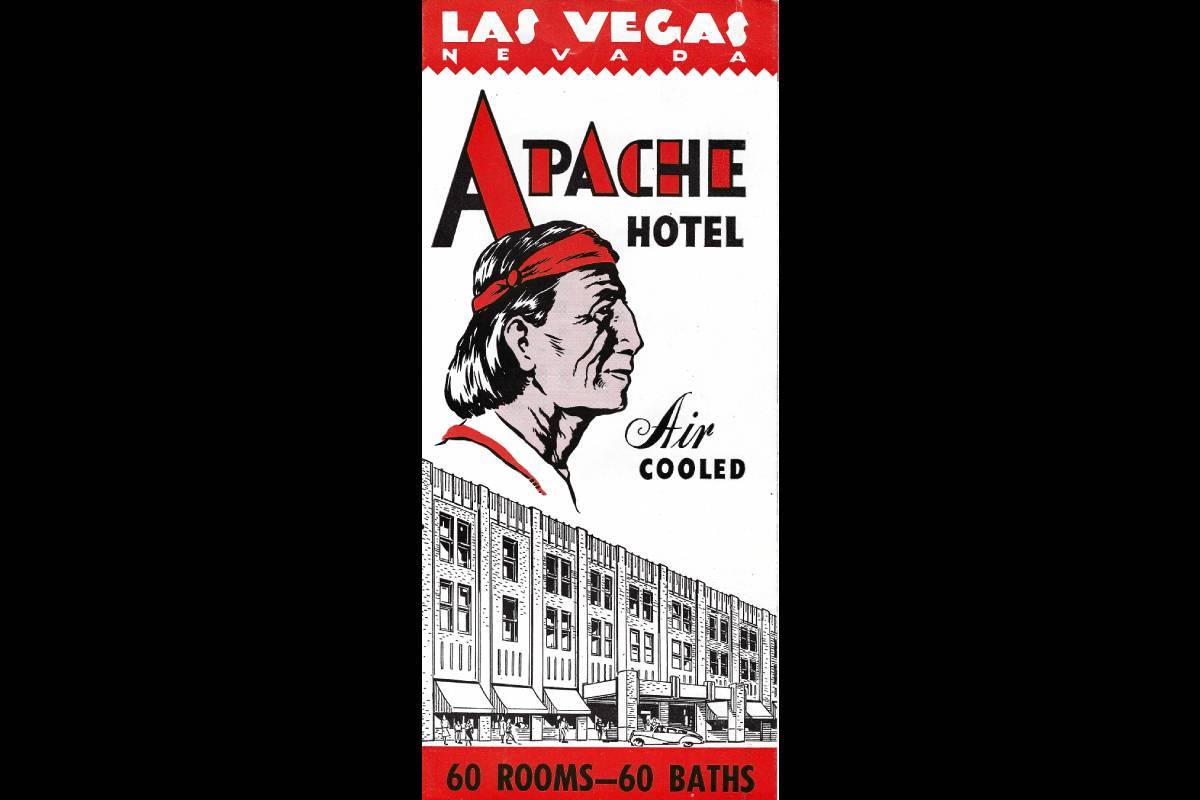 Thanks to its fine dining, clubs and luxury hotels, Las Vegas has been known to attract A-list celebrities.

The city’s ties to Hollywood fame date all the way to the early 1930s.

Back then, celebrities considered the Hotel Apache — a property on Fremont Street with fewer than 100 rooms — the place to be, whether they were in town to gamble or get a quickie divorce.

The hotel didn’t have a five-star spa or headliners like today’s megaresorts, but the amenities it did offer — air conditioning, electric elevators — were unique for its time.

Decades later, one woman is working to make sure the history of the hotel — and its founder — is preserved.

‘Vegas is on the move’

Las Vegas was unrecognizable from the sprawling, urban city of lights we know today when the Hotel Apache opened its doors.

The town housed fewer than 6,000 people. Fremont Street, which had been paved just seven years earlier, had fewer buildings — the Sal Sagev, now the Golden Gate, among them.

The Hotel Apache was considered one of the first luxury properties, offering guests rare features such as private bathrooms, automatic locks and tall ceilings. While it opened without a casino, gaming equipment was added shortly thereafter.

Robert Stoldal, a member of the Las Vegas Historic Preservation Commission, said it was the hotel of choice for celebrities and the wealthy, and comparable to luxury hotels in larger cities such as New York, Chicago and Los Angeles.

“When you walked into those rooms, you felt like you were in something special,” he said. “The artwork, the furniture, everything was a Western theme, but it wasn’t overwhelming you. … There was a lot of detail that went into not only the (overall) architecture but the architecture of each room.”

“By God, Las Vegas is on the move, folks. … That was the sense,” he said. “It’s sort of a sign of the growth of the area and the success, or the expected success, of the community and legal gambling.”

“It was the nicest place in town,” Perry said. “It brought a light on this town. It made it more than a red-light district and a train stop. … I think (P.O.) had a huge part of making our town become the hospitality city that it is and the entertainment capital of the world.”

Las Vegas’ history, and her grandfather, mean a lot to Perry. That’s why she’s doing her best to make sure they’re presented accurately.

Silvagni, a native of Italy, immigrated to the U.S. in 1905. He worked in Colorado and Utah before packing up his bags to look for subcontractor work on the Boulder Dam project at age 60.

Thousands of men had moved to Southern Nevada to work on the dam, a boon for the region. The state also made some major changes in 1931 that spurred growth: legalizing gambling and allowing quickie divorces to those who established a six-week residency in the state, the shortest required waiting period in the country.

“All those things started to bring a lot of attention and bring more people into the town. But he saw there was no place to go and have fun,” Perry said. “He had a vision. … He wanted to build a place for people to have fun, a nice place, and he wanted it to be the nicest place on the Arrowhead Trail,” the first all-weather road from Salt Lake City to Los Angeles that ran straight through Las Vegas.

“There were a lot of people thinking it this was a good place to invest, but (Silvagni) was the one that did it,” Stoldal added. “It lived up to its reputation. When you stayed at the Apache, you were not disappointed. One Hollywood star would tell another … and its reputation continued to build as a place to be in the 1930s.”

Parts of the property have been leased out to various operators since it opened in 1932.

Benny Binion leased the property in 1951. Several years later, it was leased to Joe Brown — a fellow gambler and friend of Binion’s — after Binion was incarcerated for tax evasion. In 1973, the Binion name returned to the property after the Silvagni family signed a long-term lease with Jack and Ted Binion, Benny’s sons.

The remaining Silvagni family doesn’t operate the property but acts as landlords.

The Great Recession led to the property’s hotel closing in 2009, though the casino and other amenities remained open. The Hotel Apache reopened in 2019 after major renovations.

In spite of its long legacy in Las Vegas, its founder’s name is often unrecognized. UNLV gaming historian David Schwartz said the building’s location may play a role.

“It wasn’t on the Strip. It didn’t have the notoriety,” he said.

Green agreed that there have been many more notable hotels built since 1932, many of them larger, more prominent and with more mob connections, making for a juicier story.

Biases against Italian immigrants may also have played a role in the Silvagni name fading over time, he said. But Green believes Silvagni played a “very important” role in Las Vegas’ history.

“He accomplished something in his time,” Green said. “P.O. deserves a lot of attention.”

Perry is working on a book to give her grandfather just that. She said the countless hours of research she has put into the project made her feel closer to her grandfather, who died when she was 4 years old.

Before, she had only hazy memories of her grandfather — his constant cigar smoking, his love of three-piece suits and his “buongiorno” greetings.

“I feel a very close bond with this man that I didn’t get to spend that much time with,” she said. “I think some of the things I am are because of him — the will to succeed and accomplish.”

Perry hopes to release a book on her grandfather next year.

“The history is getting lost. It’s going away,” she said. “I want to preserve it.”