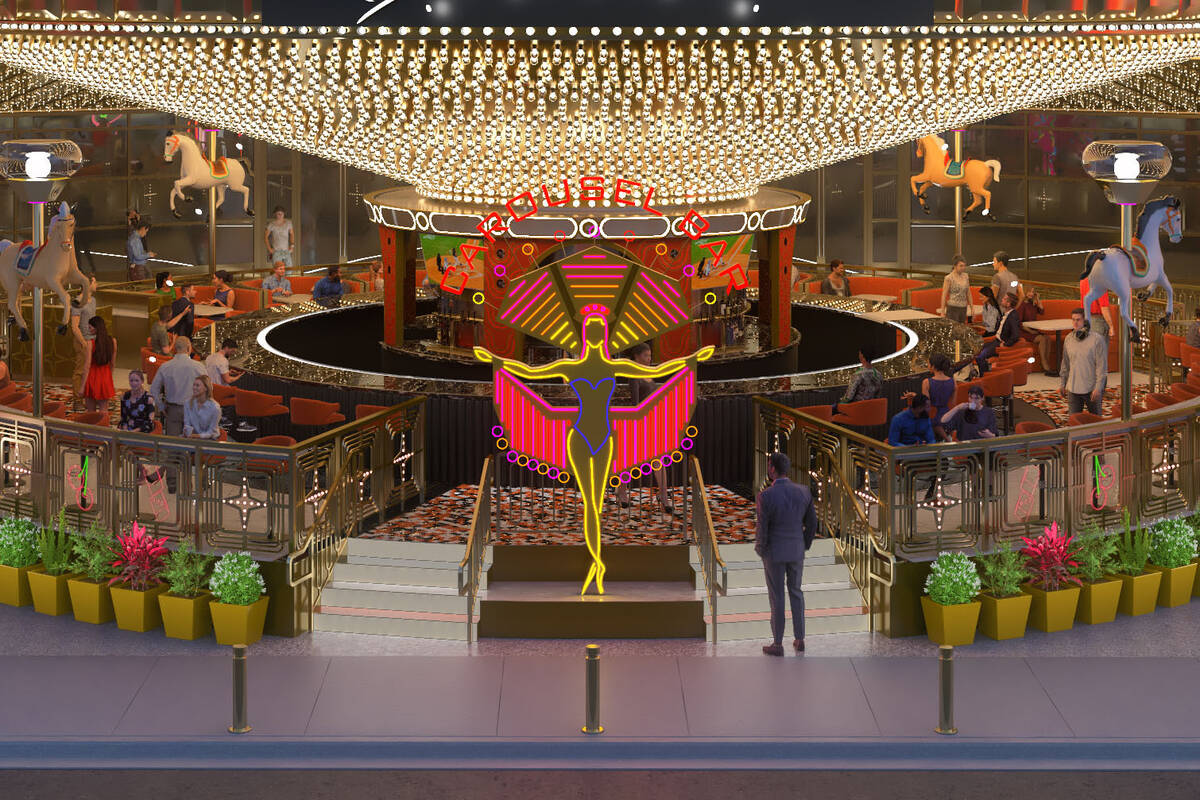 A rendering of the Carousel Bar, an outdoor venue under the Plaza's historic dome. (Courtesy of Plaza Hotel & Casino) 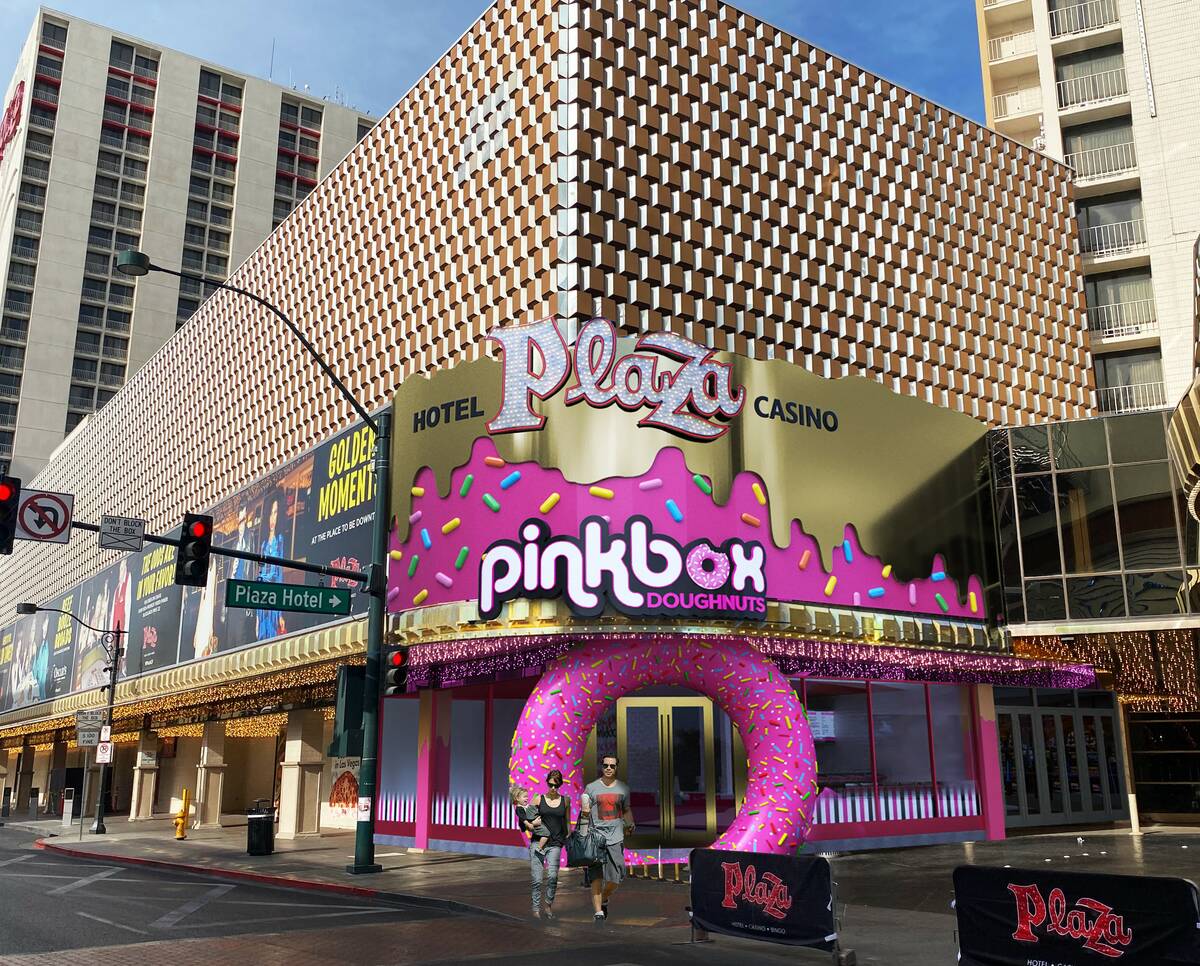 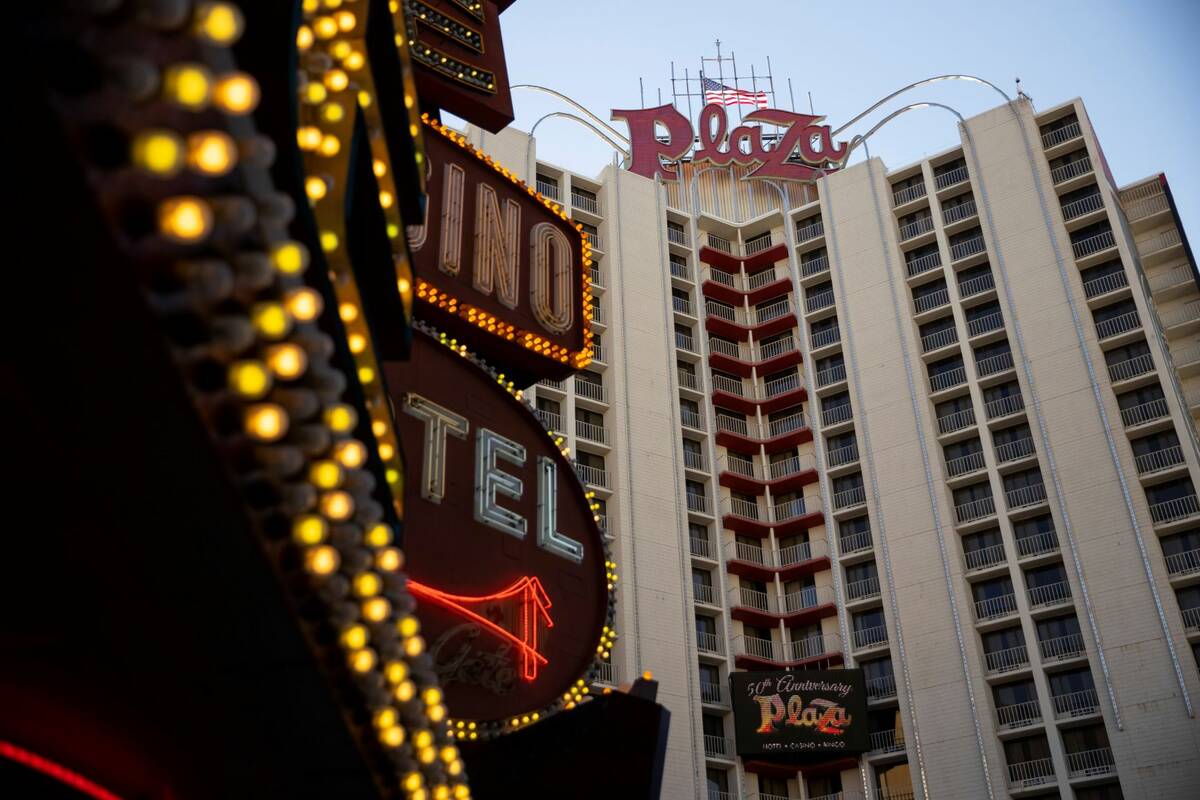 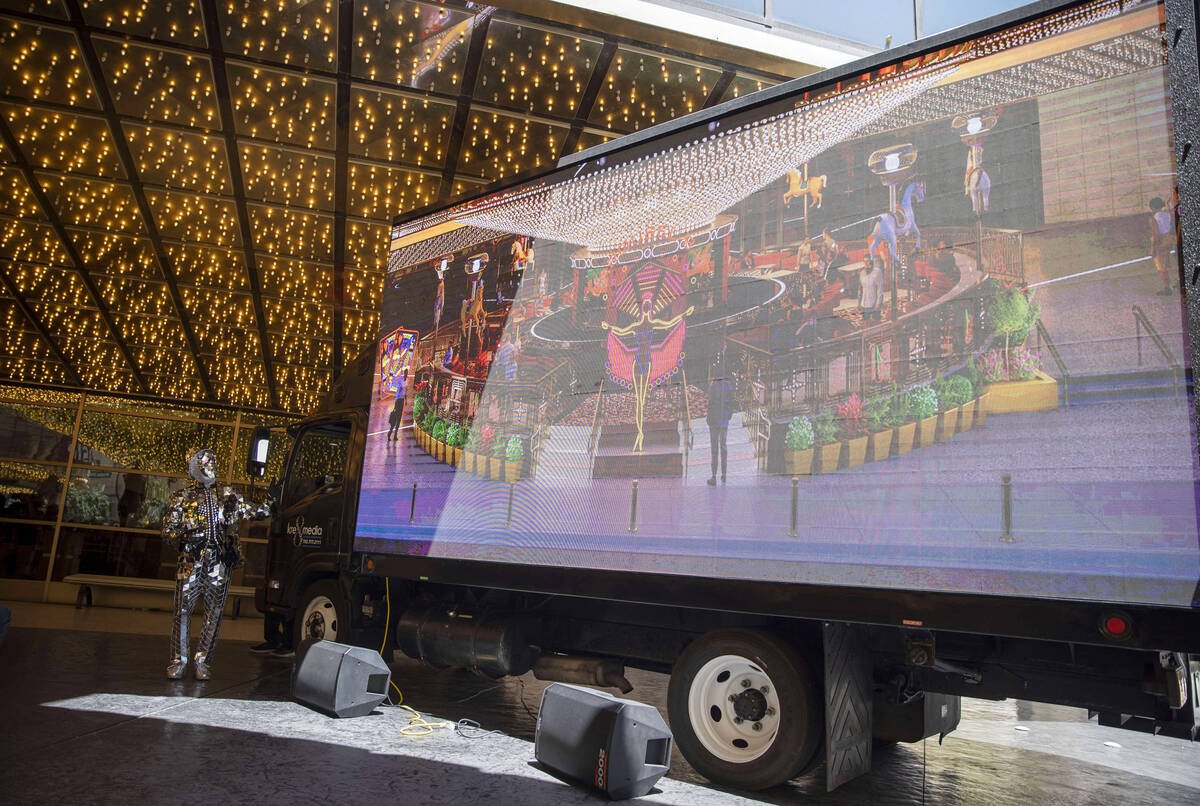 Renderings of renovations expected to transform the Plaza hotel-casino are shown during a news conference in front of the property on Tuesday, June 14, 2022, in downtown Las Vegas. (Heidi Fang/Las Vegas Review-Journal) @HeidiFang 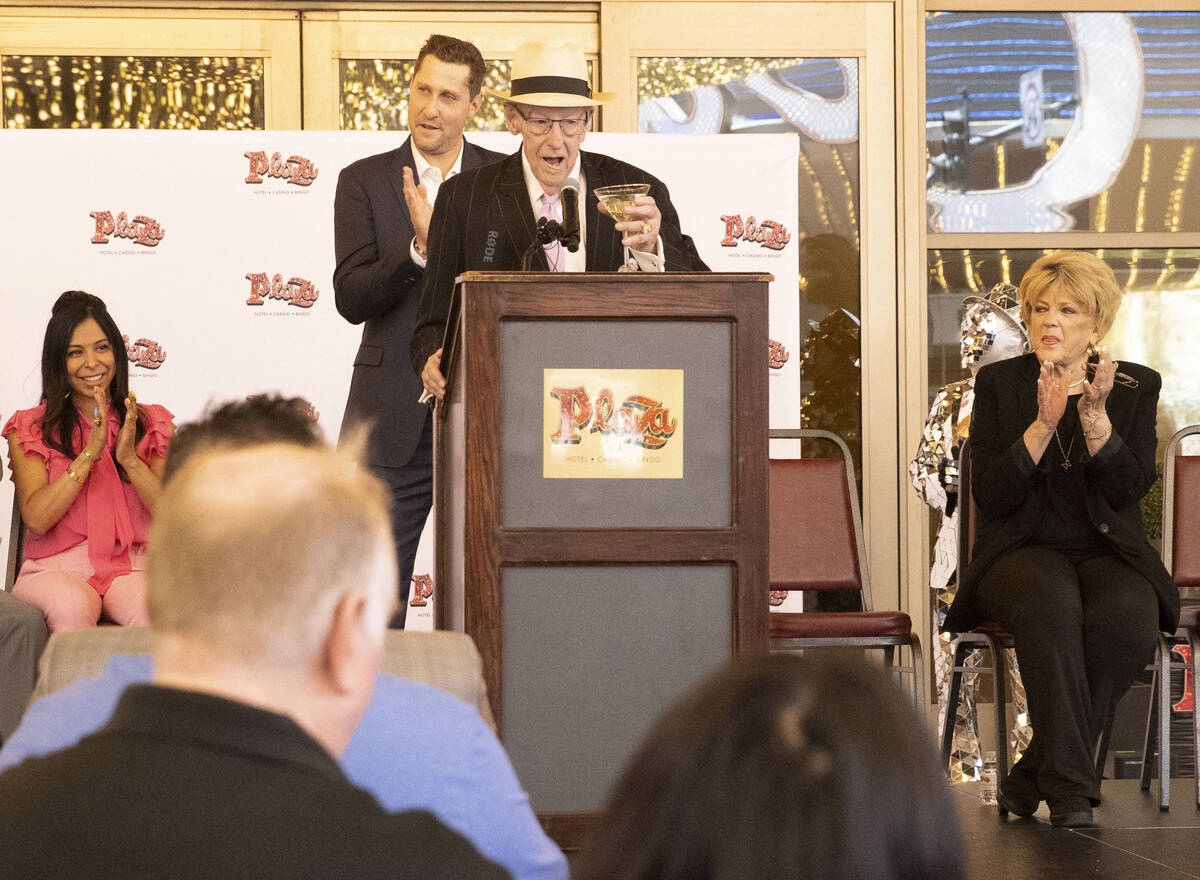 Former Las Vegas mayor Oscar Goodman, center, raises his martini glass for a toast during a news conference to announce renovations to the Plaza hotel-casino with his wife, the current mayor of Las Vegas Carolyn Goodman, right, Judith Siegel of Pinkbox Doughnuts, left, and the CEO of the Plaza hotel-casino, Jonathan Jossel in attendance on Tuesday, June 14, 2022, in downtown Las Vegas. (Heidi Fang/Las Vegas Review-Journal) @HeidiFang 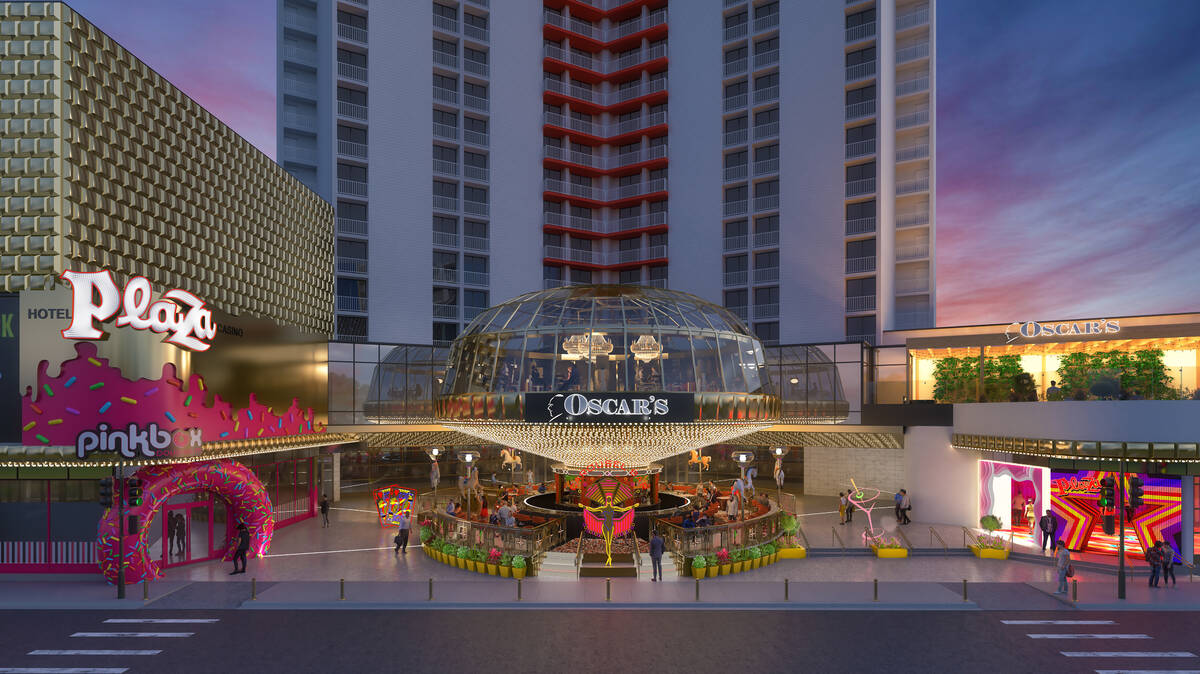 A rendering of renovations at the Plaza hotel-casino. (Courtesy of Plaza Hotel & Casino)

The Plaza facade is getting a makeover that promises to bring in new guests looking for a treat — or a simply a great picture.

The downtown Las Vegas property, which celebrated its 50th anniversary last year, announced several large-scale projects Tuesday that will transform the facade under its famous dome.

By 2023, visitors will be greeted by four additions: the Carousel Bar under the Plaza dome, a smoke-free gaming area, a rooftop patio at Oscar’s Steakhouse and a new branch of the Vegas-based Pinkbox Doughnuts.

“(Former Mayor Oscar Goodman) likes to say it’s a 12-year overnight success,” Jonathan Jossel, CEO of the Plaza Hotel & Casino, said during a news conference. “But when you look at what’s happening around here and the great changes happening downtown that are starting to take shape, we’ve always felt that Main Street would be the best street in downtown. That’s actually started to happen, with the bulk of the Arts District from the south. We see it every day, and that makes it a really exciting place to be.”

Officials said construction on the “multimillion dollar” renovations that will “transform the Main Street facade” will begin later in June and is projected to be complete by year’s end.

At the center of the renovated Main Street facade will be the Carousel Bar. The 2,500-square-foot outdoor venue under the famous Plaza lights will feature crafted cocktails and be decorated with life-sized Vegas-themed elements, including moving carousel horses, spinning martini glasses and more. The venue facing the west Fremont Street Experience entrance will have an outdoor cooling system and seating for nearly 100 guests, according to the Plaza.

Next to the bar will be the entrance to downtown’s first smoke-free and social media-friendly gaming space. Through a collaboration with YouTube slot influencer Brian Christopher, the 2,500-square-foot area is intended to be the spot where fans can play the games they saw on Christopher’s channels.

Plaza officials said the space is particularly accommodating to social media posting because the venue will be able to lower the section’s music volume or play only copyright-friendly music better suited for social platforms. It will also include photo space with fun backdrops, intended to feel like “sensory overload” for maximum social media intrigue.

Christopher said he exclusively partners with nonsmoking areas in his business and is proud of the Plaza for taking the step.

“The way the world is going right now is moving to smoke-free,” he said. “Only 13 percent of the U.S. population smokes, so they’re getting ahead of the curve and I couldn’t be more proud for what they’re doing here.”

Above the new gaming space will be Oscar’s patio, a rooftop deck accessible through the existing Oscar’s Steakhouse lounge. The patio will add about 225 seats and overlook Main and Fremont streets.

Lastly, an oversized 3-D doughnut under the porte-cochere will lead to the new Pinkbox Doughnuts. The Vegas company will sell its full line of more than 70 doughnut flavors and create an exclusive menu of alcoholic doughnut milkshakes for the location. The 1,200-square-foot store’s interior will mirror other locations across the valley with pink floors, 3-D sprinkles and other signature decor.

The 51-year-old property was built on the site of an historic railroad depot in downtown Las Vegas and sits across from the Fremont Street Experience.

Both the Plaza and Oscar’s Steakhouse will remain open during construction.