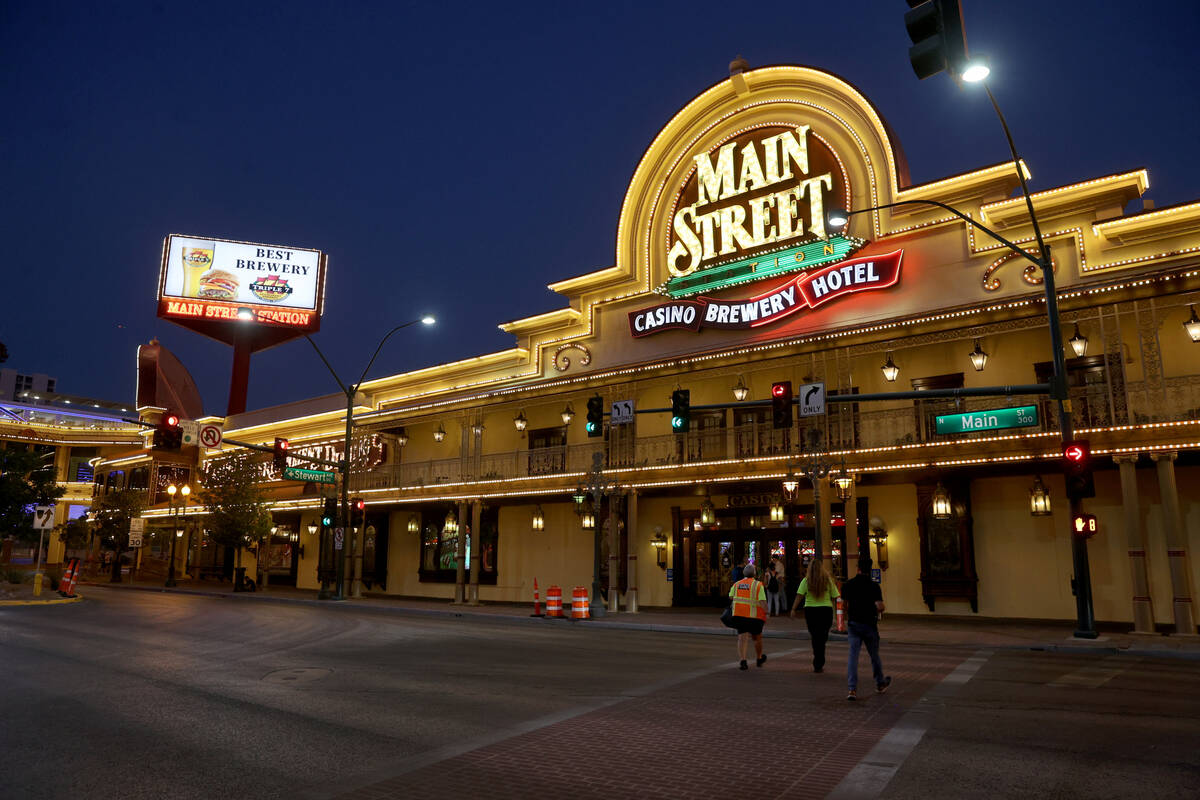 Main Street Station just before the 6 a.m. reopening of the hotel-casino in downtown Las Vegas Wednesday, Sept. 8, 2021. The Boyd Gaming Corp. property had been closed since March 2020 due to the pandemic. (K.M. Cannon/Las Vegas Review-Journal) @KMCannonPhoto 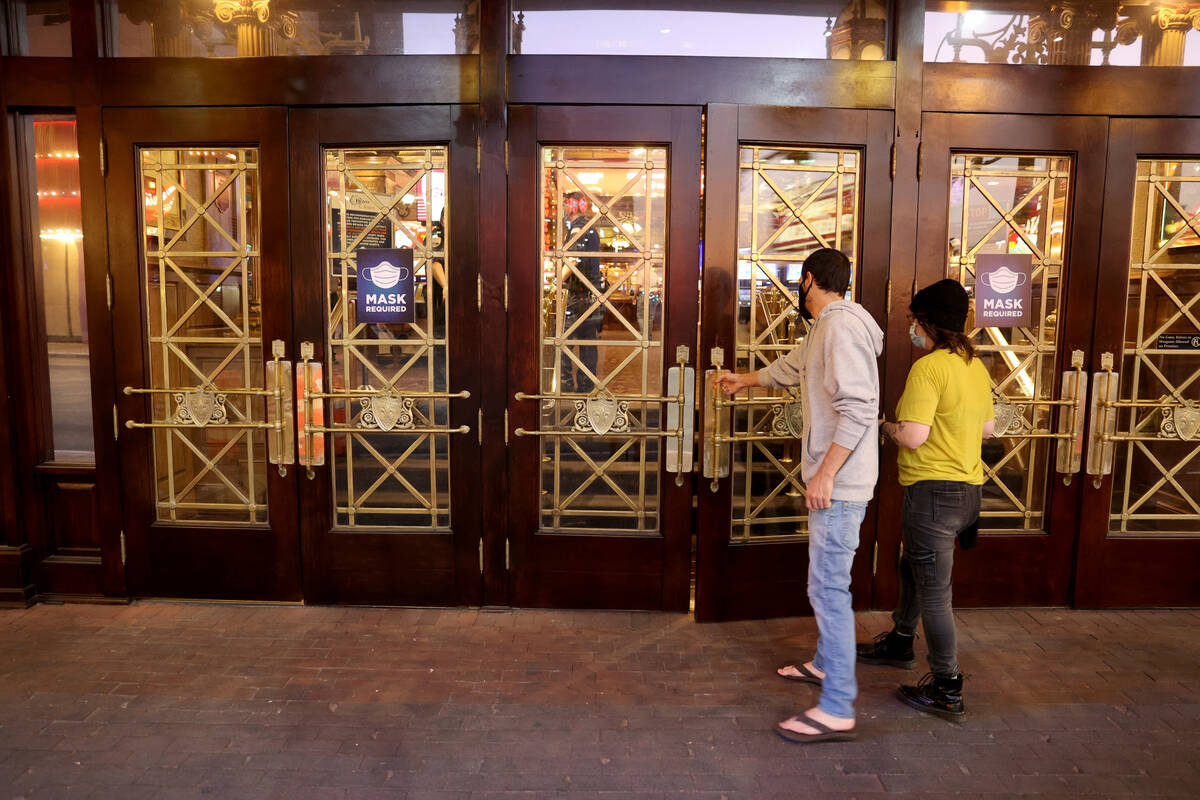 People walk into Main Street Station at the 6 a.m. reopening of the hotel-casino in downtown Las Vegas Wednesday, Sept. 8, 2021. The Boyd Gaming Corp. property had been closed since March 2020 due to the pandemic. (K.M. Cannon/Las Vegas Review-Journal) @KMCannonPhoto 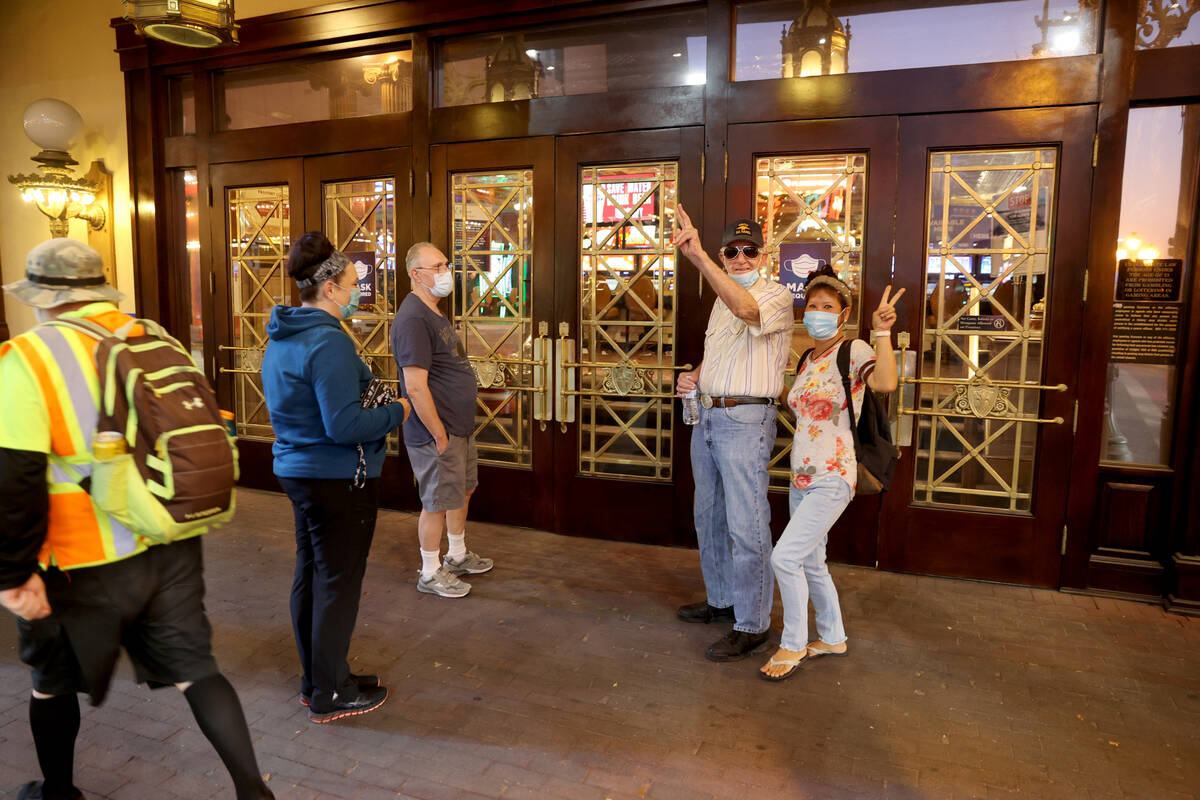 Lori Doane, from left, John Carollo, Ronald Rasmusson and Yong Cho, all of Las Vegas, wait outside Main Street Station just before the 6 a.m. reopening of the hotel-casino in downtown Las Vegas Wednesday, Sept. 8, 2021. The Boyd Gaming Corp. property had been closed since March 2020 due to the pandemic. (K.M. Cannon/Las Vegas Review-Journal) @KMCannonPhoto

Main Street Station is back.

Main Street Station was one of two Boyd Gaming Corp. properties that remained closed from the shutdown. Eastside Cannery is the other.

Boyd has no special events planned for what it considers a soft opening, spokesman David Strow said Tuesday. Main Street Station’s reopening will mean all three of Boyd’s downtown hotel-casinos — Fremont and California Hotel are the other two — are up and running.

Main Street will reopen as a 24/7 property, but its two restaurants will open with limited hours, Boyd announced last month. Triple 7 Restaurant and Microbrewery will be open 5 p.m. to midnight Thursday through Monday, and Garden Court buffet will open 8 a.m. to 2 p.m. daily for brunch and from 4 to 9 p.m. on Friday and Saturday for dinner.

Boyd executives had said demand would dictate the timeline for both of its yet-to-reopen properties, Main Street and Eastside Cannery. The time has arrived for Main Street, as Boyd has been “running very busy” at the neighboring California and Fremont hotels, Strow said last month.

Eastside Cannery doesn’t have an opening date. Strow said last month that Boyd has “seen good business trends” at its other Boulder Highway property, Sam’s Town, “but we’re not yet at a point where we need to open up a second property on the Boulder Strip.”

Station Casinos has no plans to open any of its three closed properties this year. Company executives will consider reopening Fiesta Henderson, Fiesta Rancho or Texas Station “if and when we think they can add to the absolute profitability of the company going forward,” CEO Frank Fertitta III told investors on a July 28 earnings call.

In June, Texas Station and Fiesta Rancho extended their nonoperational status for the second consecutive year through June 4, 2022. Fiesta Henderson received Henderson City Council approval in May to remain nonoperational through the end of the year.

Cal-Nev-Ari Casino and Bar remained open during the day but only because it also operates as a post office. Cal-Nev-Ari reopened its bar April 1, but the gaming machines may not be playable until spring at the earliest.

“But we will bring in pool tables and electric dart board games into the bar to help fill the void and give our residents some enjoyment while waiting,” he said, adding a thumbs-up emoji.