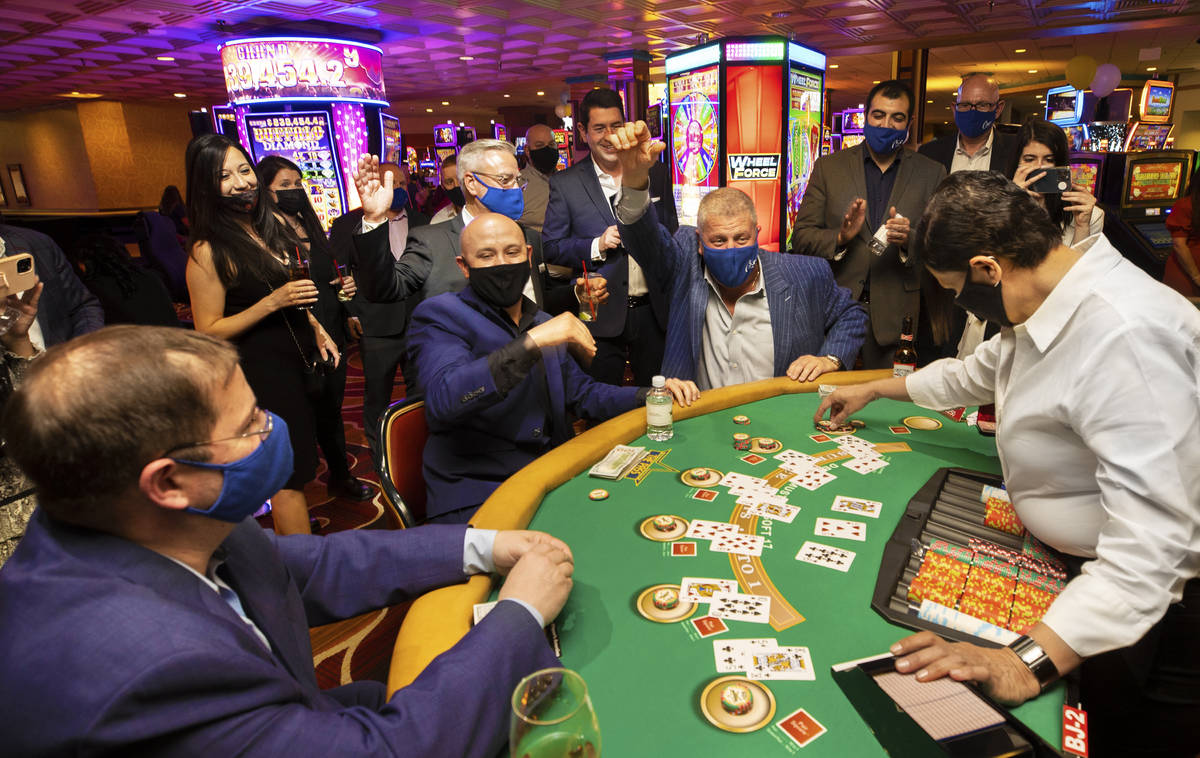 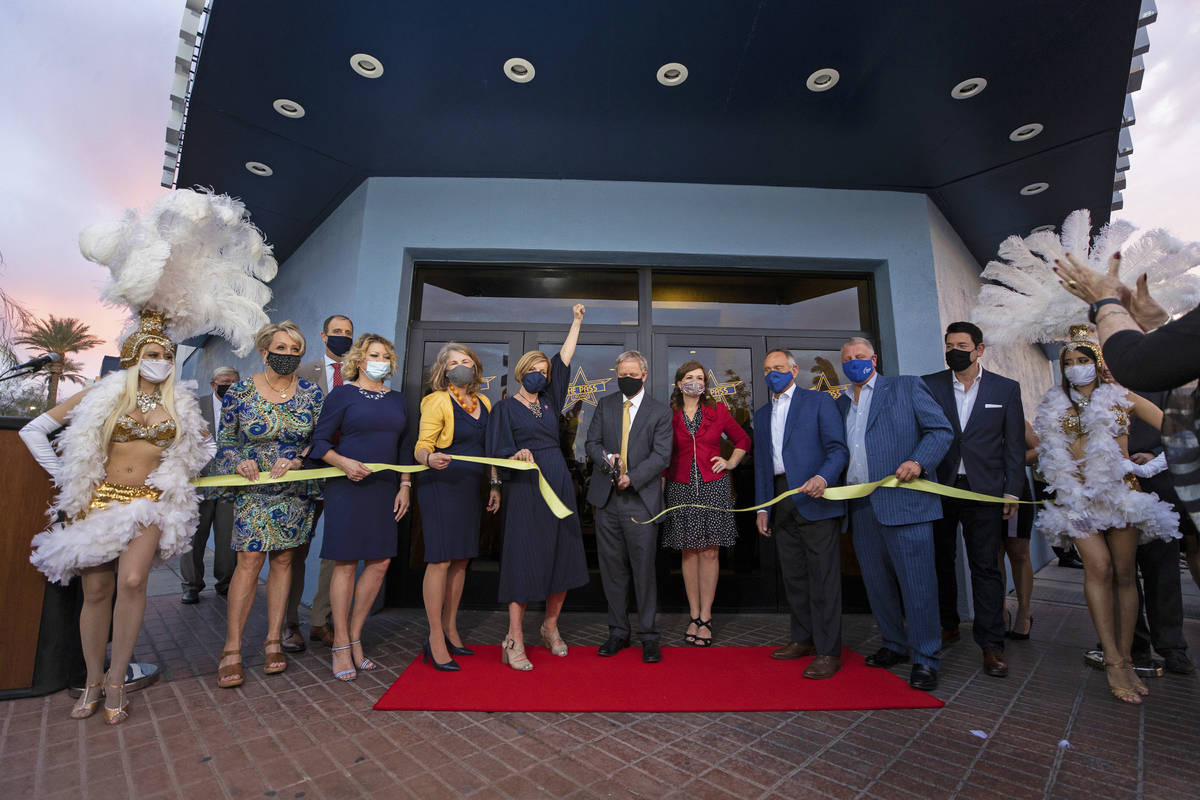 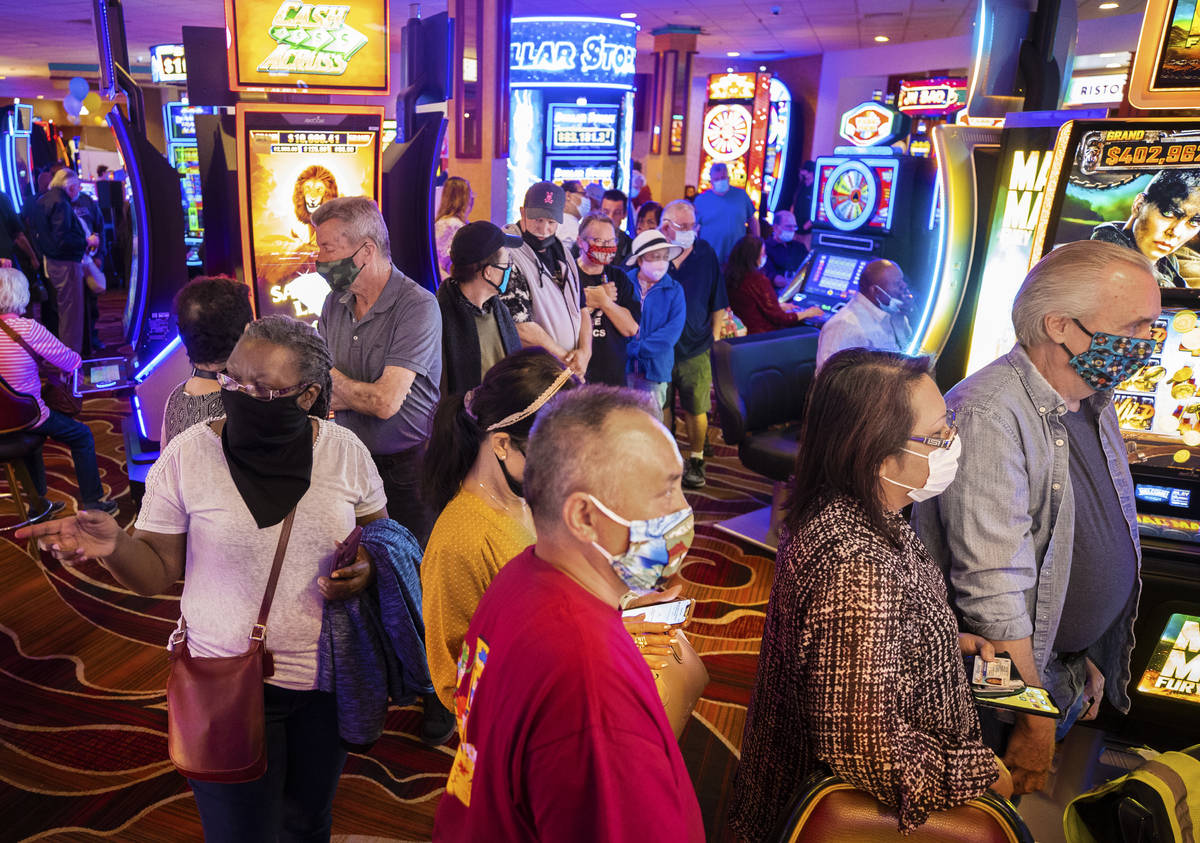 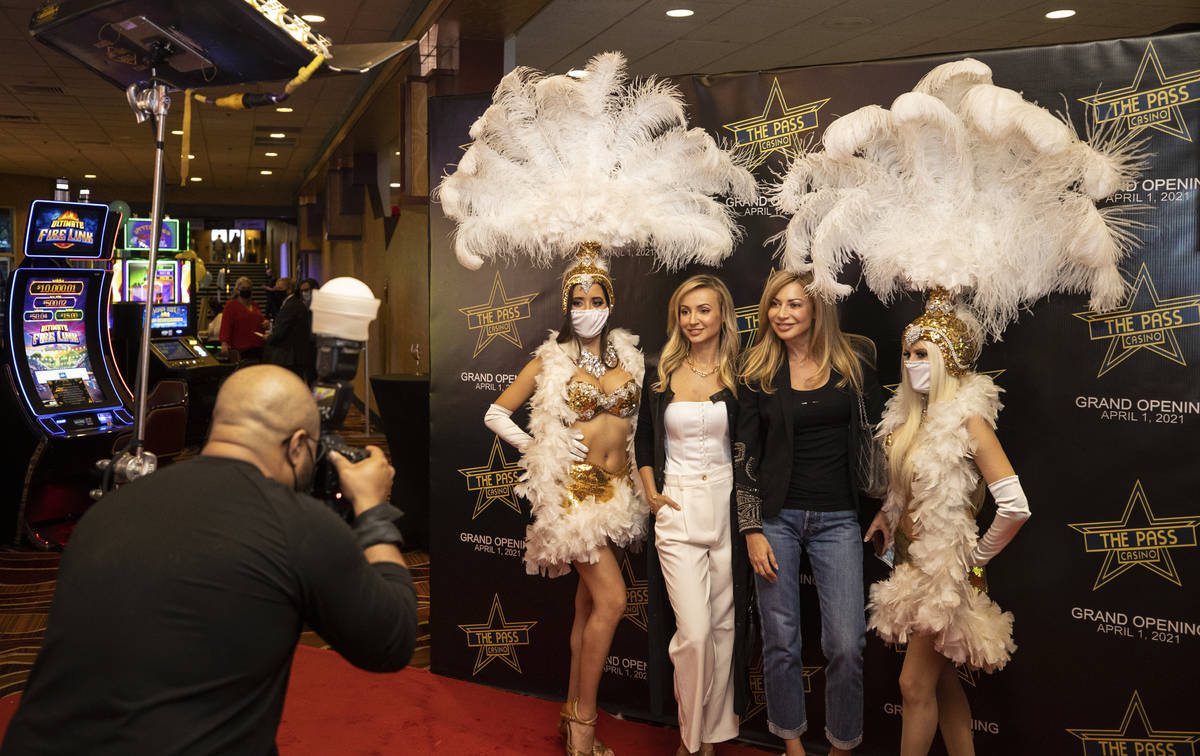 Olesea Stoian, left, and Roxana Tamburro take a photo with showgirls during the VIP opening party for The Pass casino on Thursday, April 1, 2021, in Henderson. (Benjamin Hager/Las Vegas Review-Journal) @benjaminhphoto 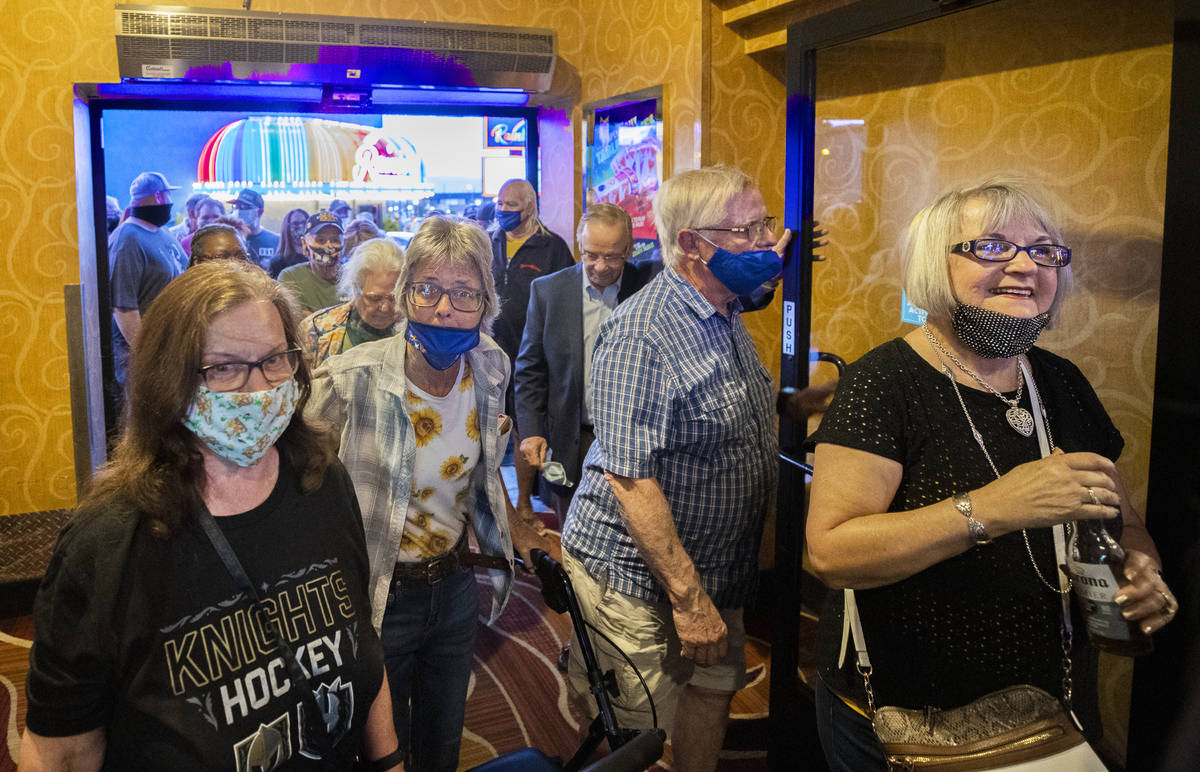 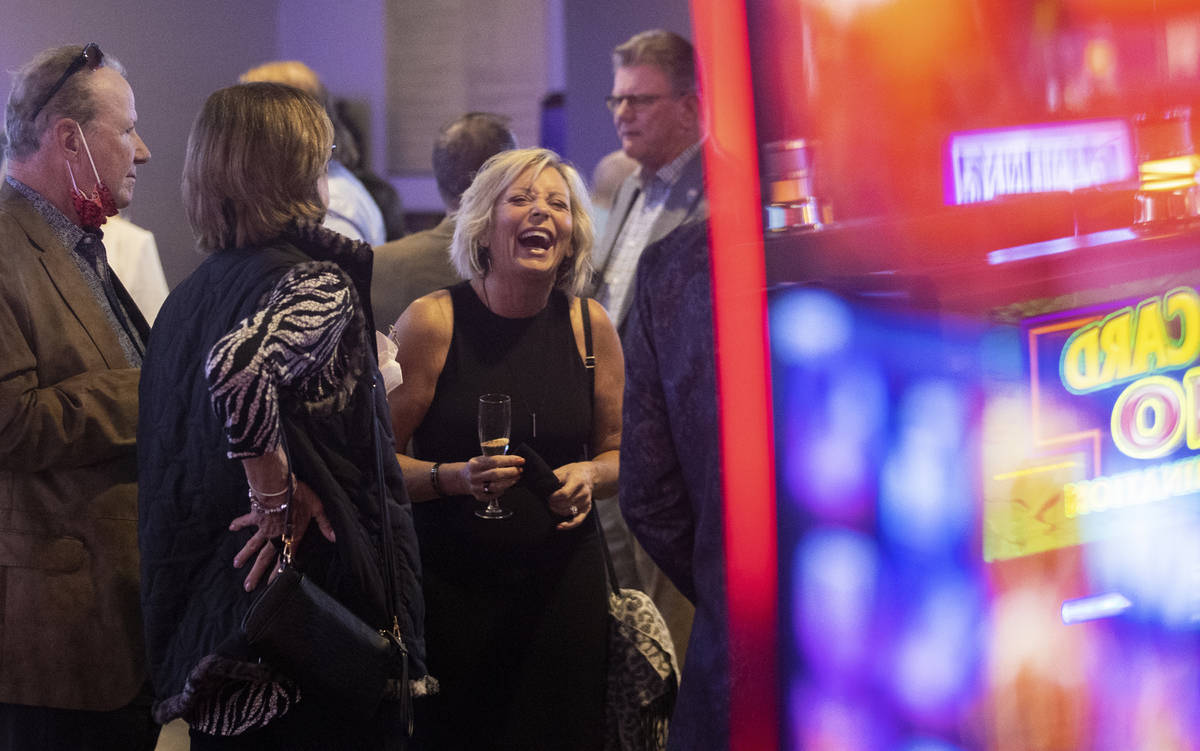 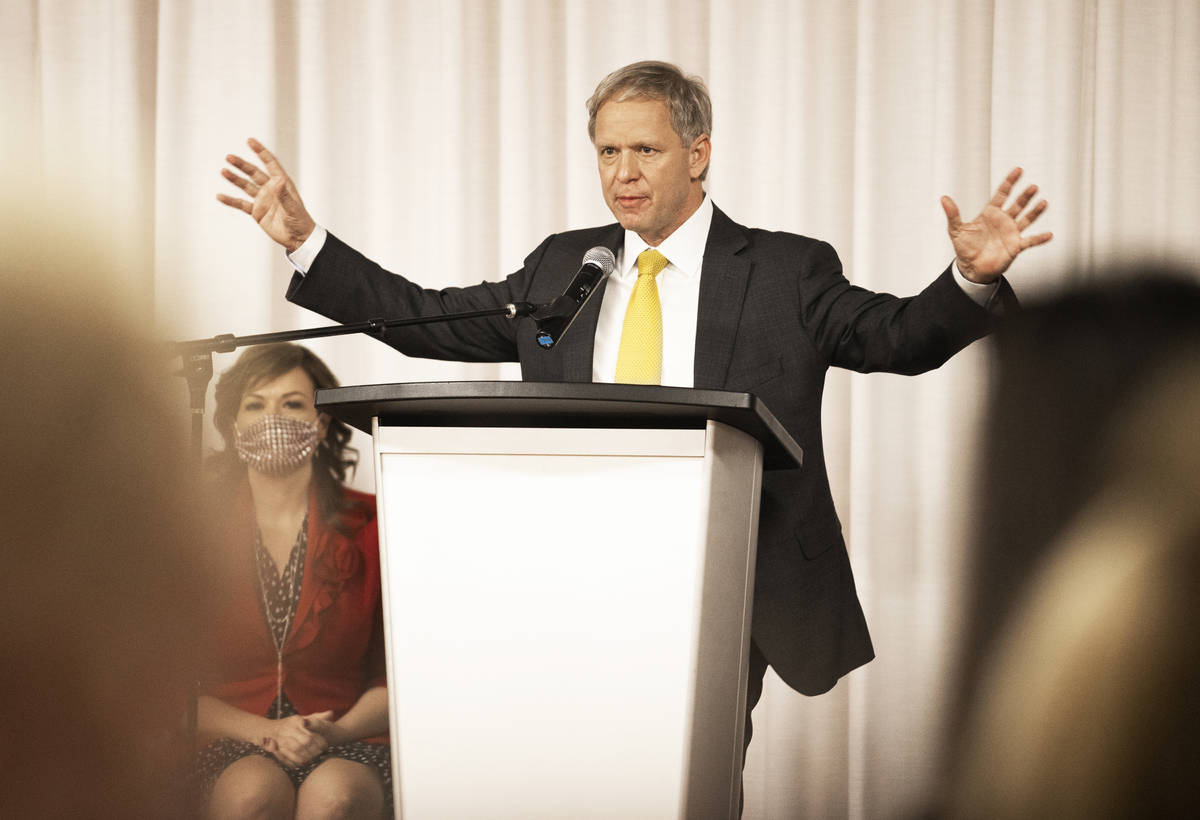 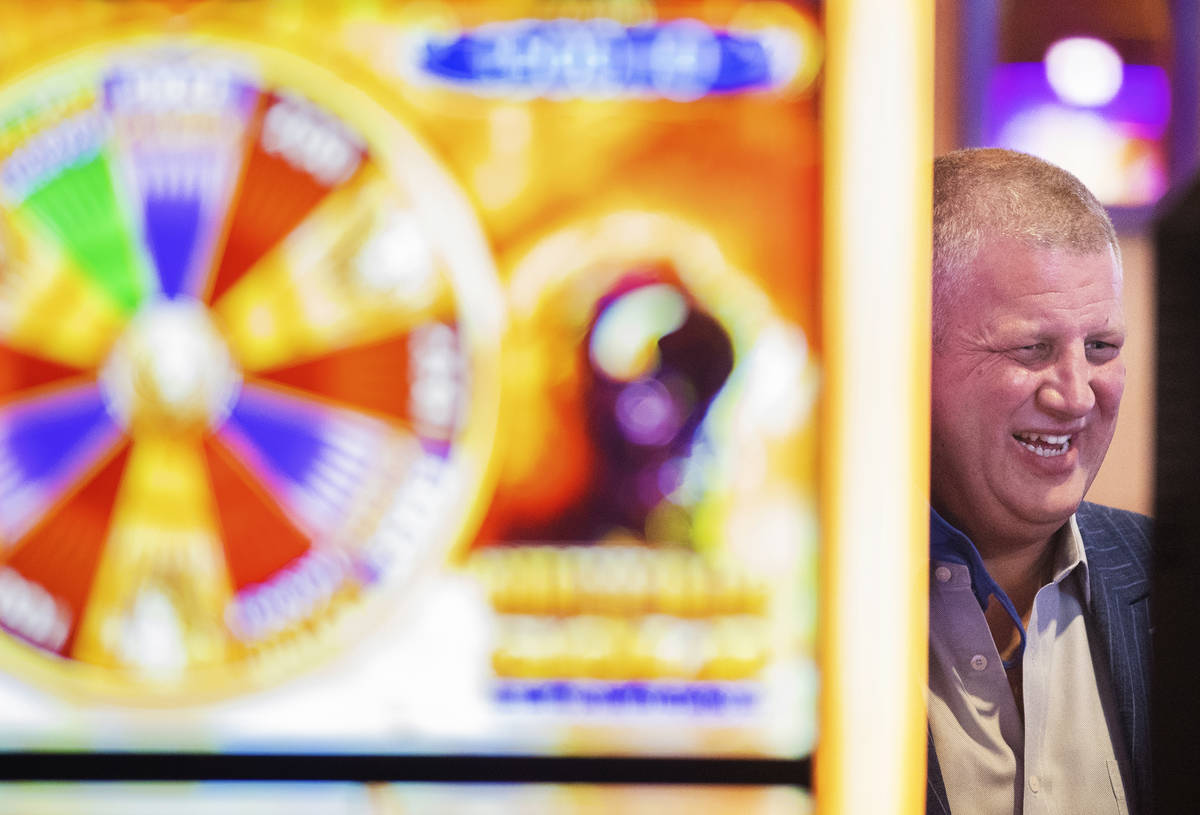 Circa casino owner Derek Stevens shares a laugh with friends during the VIP opening party for The Pass casino on Thursday, April 1, 2021, in Henderson. (Benjamin Hager/Las Vegas Review-Journal) @benjaminhphoto 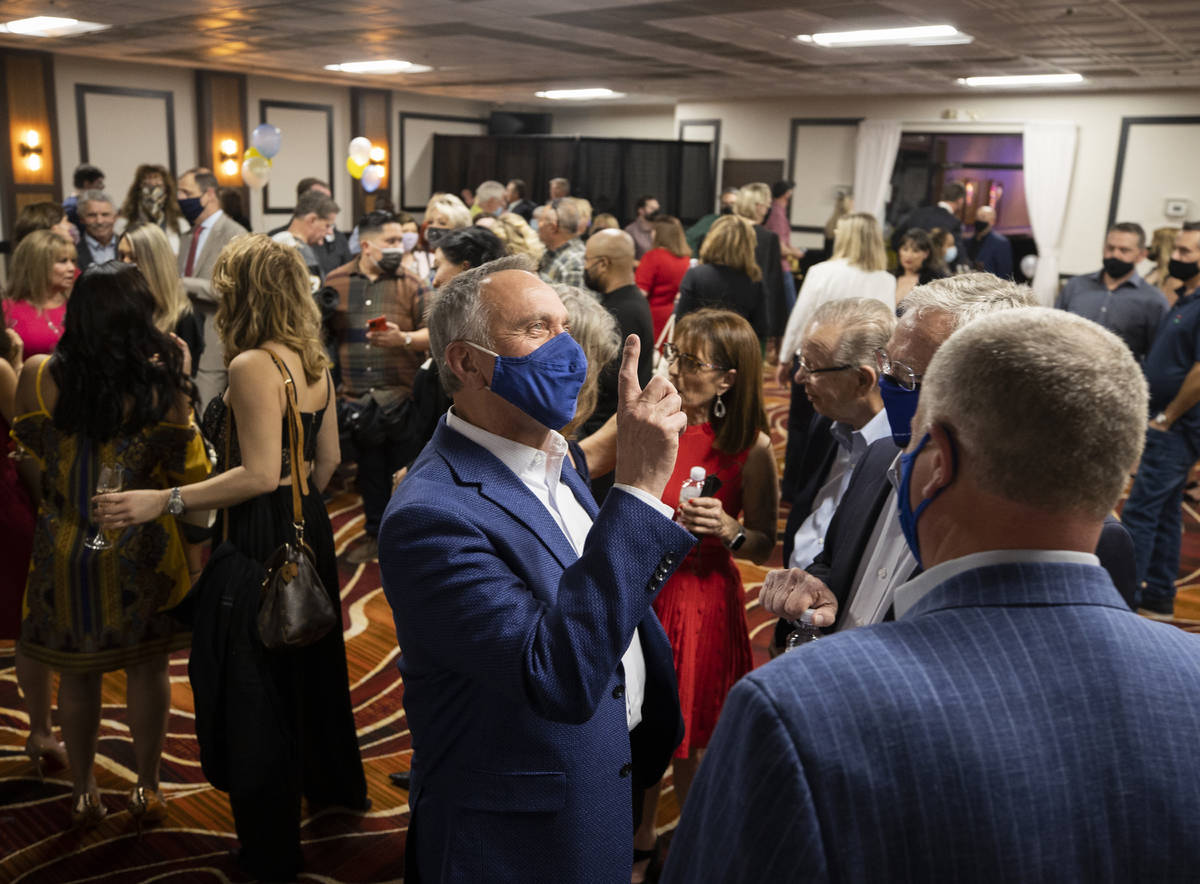 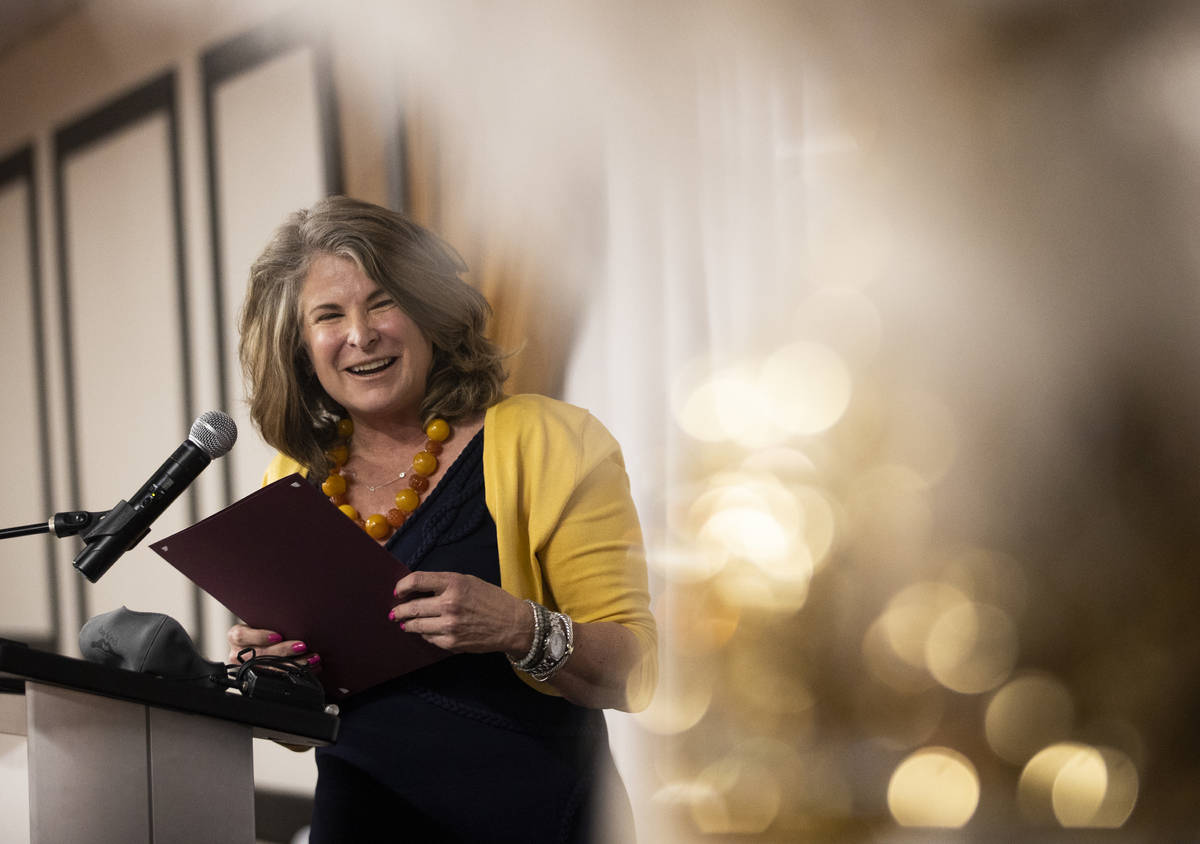 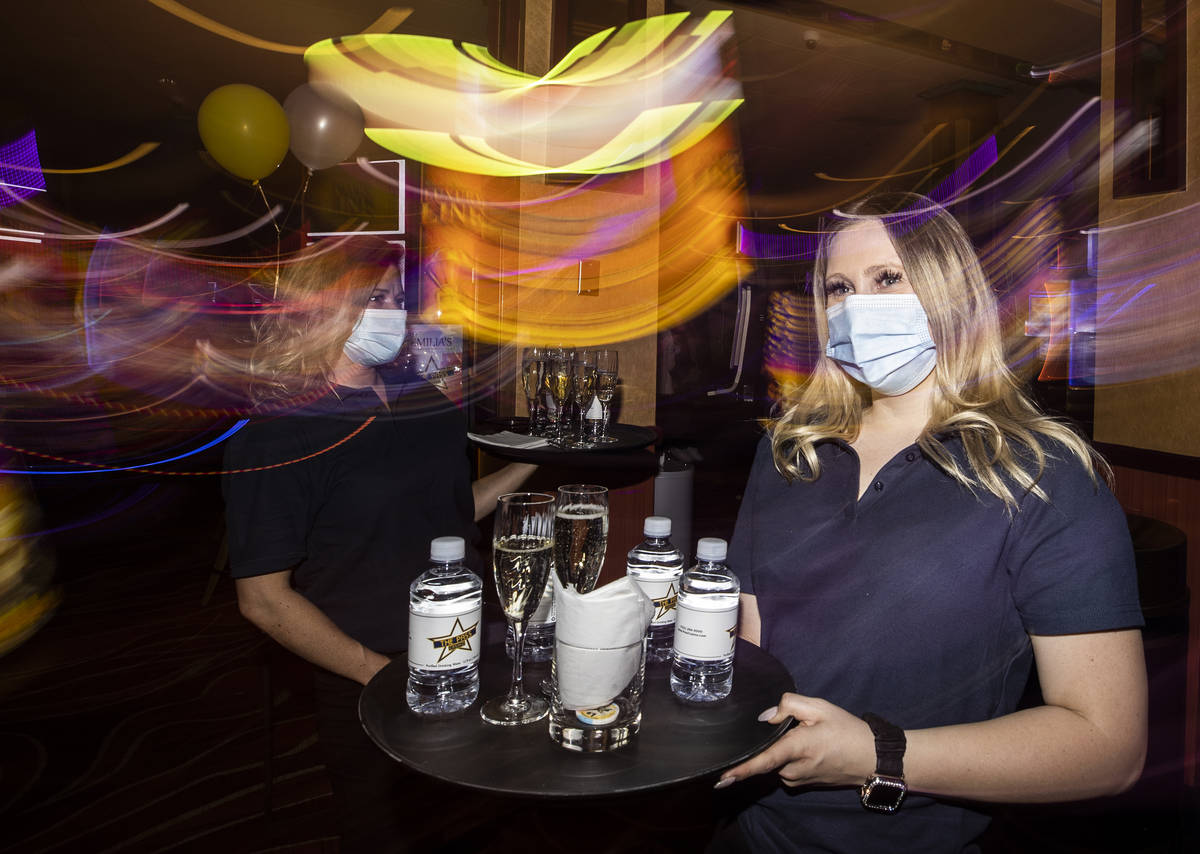 The dozens of people waiting outside to enter The Pass on Thursday evening grew mildly impatient.

They had been waiting a year to return to their local spot, after all.

“OK, enough, get the doors open,” one woman remarked with a happy chuckle.

Minutes later, the former Eldorado Casino reopened Thursday night for the first time as The Pass. The former Eldorado, then owned by Boyd Gaming Corp., closed last March due to the pandemic.

More changes are on the horizon, owner Joe DeSimone said in an interview Monday. He has plans to bring a hotel to the property within a year-and-a-half.

All of the changes have taken place since Boyd struck a deal in December to sell the Eldorado to DeSimone Gaming. The renovated property has a modernized look, though DeSimone expects The Pass to maintain a neighborhood feel and its customer base to largely feature the same locals who frequented Eldorado.

“We’re gonna put our own touches on it, as we have, but hopefully we’ll always be able to look back to the time that the Boyds owned it with our customers and have good memories from that,” DeSimone said Monday. “But it was in our judgment it was time to put a facelift on it, bring it into the 21st century — and with a bang.”

Live gaming proved popular in its return Thursday to Water Street: four blackjack tables, a roulette table and a craps table. Circa CEO Derek Stevens sipped a Budweiser while sitting at a blackjack table with other Circa representatives. Stevens, whose Circa Sports company operates The Pass’ new sportsbook, let out a “Hey-oh!” and pumped his fists at a favorable draw.

The sportsbook will begin taking bets upon regulatory approval in the coming weeks. It’s the second satellite location for Derek Stevens’ sportsbetting company.

An hour earlier, 64-year-old Sherman Wright took in what he called the “new atmosphere” from another blackjack table. The Boulder City resident used to visit Eldorado for several years when he lived in Henderson. Now, he visits Railroad Pass, DeSimone Gaming’s other property, which he said wasn’t “set up” as well as The Pass.

“It’s really a nice casino, man,” said Wright, who owns Sherman’s House of Antiques in Boulder City. “They really did a hell of a job.”

DeSimone admitted to some nerves about an hour before the ribbon-cutting ceremony. Railroad Pass at U.S. Highway 93 and Interstate 11 was still up and running when DeSimone Gaming took over operations; he didn’t have to start over like he did at The Pass, he said.

“I haven’t slept in four or five nights,” DeSimone said just before the ribbon-cutting.

He credited his team for putting the work into the property ahead of its opening. The one thing he wasn’t expecting, he joked, was his 6-year-old daughter to behave herself. Emilia, the inspiration for the property’s cafe, later sat in a booth while Henderson officials thanked her father for opening the casino and bringing jobs to Water Street.

The pair of Pass properties feature the same loyalty rewards program and a shuttle service that takes customers between the two properties.

“IT’S OPEN FOLKS”: We are on Water Street in the @cityofhenderson where doors are now open at the brand new @PassCasino. Customers at the neighboring Rainbow Casino even came across the street to see the opening. #RJNow #ThePassCasino #Henderson pic.twitter.com/nmCVGAhuM0

“When the Eldorado closed, I think there was a sense of sadness here in Henderson,” Lee told the crowd gathered outside for the ribbon cutting. “But with that, we now have The Pass, a new business here on Water Street and just the reinvigoration of this community and, more importantly, jobs for our neighbors and our community.”

The property opened as the Wheel Casino in 1961, and was sold to Paul Perry, Joe Crowley and members of the Boyd family in 1962. They reopened it that year as the Eldorado. The Boyds took full ownership in 1966 and Boyd Gaming held the property until last year.

Boyd kept Eldorado’s doors closed even as it opened other properties in the valley beginning June 4. The Henderson City Council in August approved Boyd’s request to consider Eldorado’s gaming and liquor licenses nonoperational.

Diane Seaton, 76, was there on its last day. She was at the front of the line on the casino’s side entrance Thursday evening.

“It was sad,” said Seaton, a Henderson resident of six years. “Then we waited all year. Then we found out it got sold. So anyhow, we’re happy it’s open again.”

Seaton said she visited the former property often and will miss playing bingo, as the former bingo room was replaced with The Venue, a space for events, banquets and receptions. But she was excited to check out the changes to an old haunt of hers. Another woman chimed in: “We’re excited to win some money.”

“And win some money,” Seaton said.