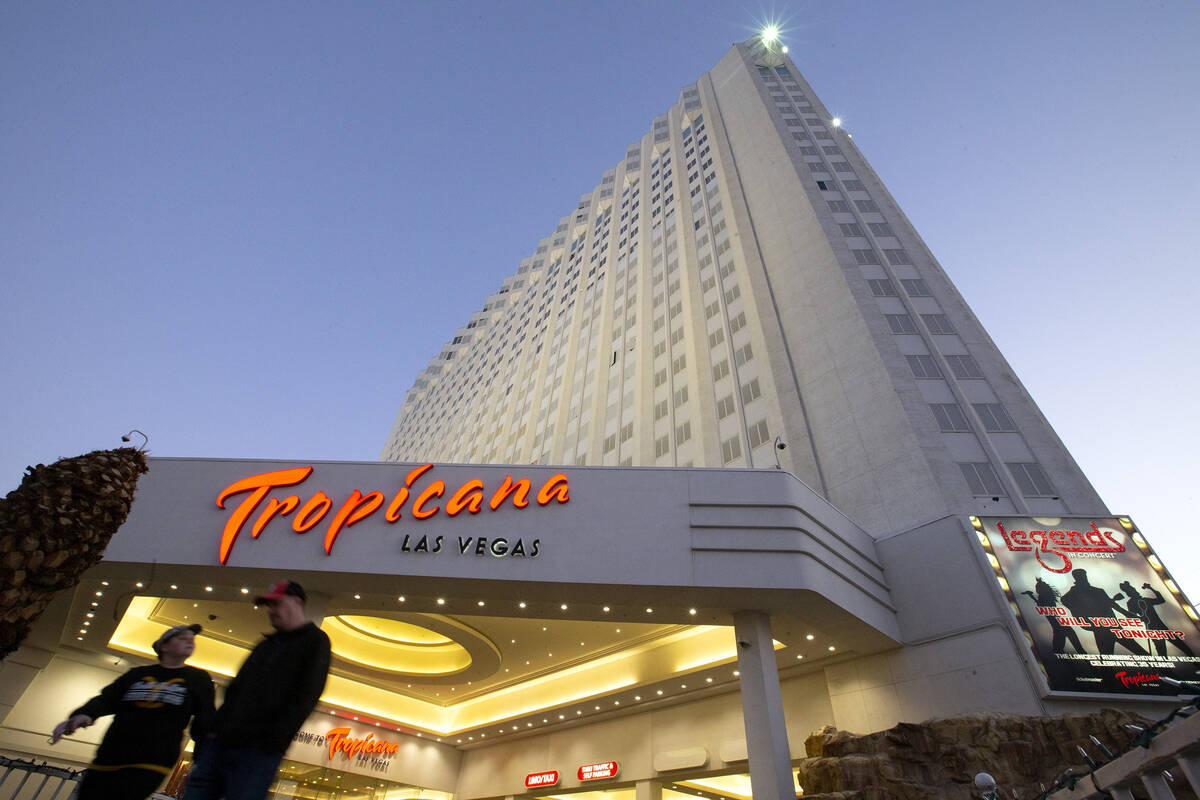 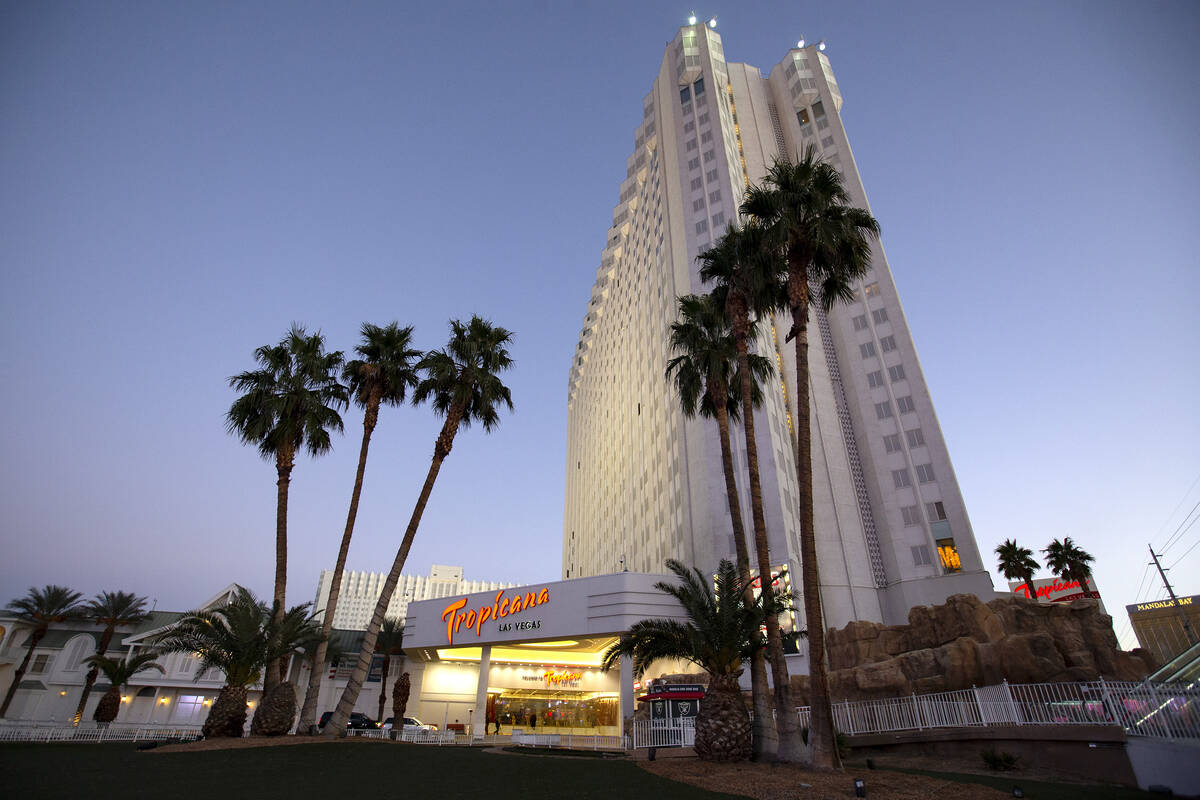 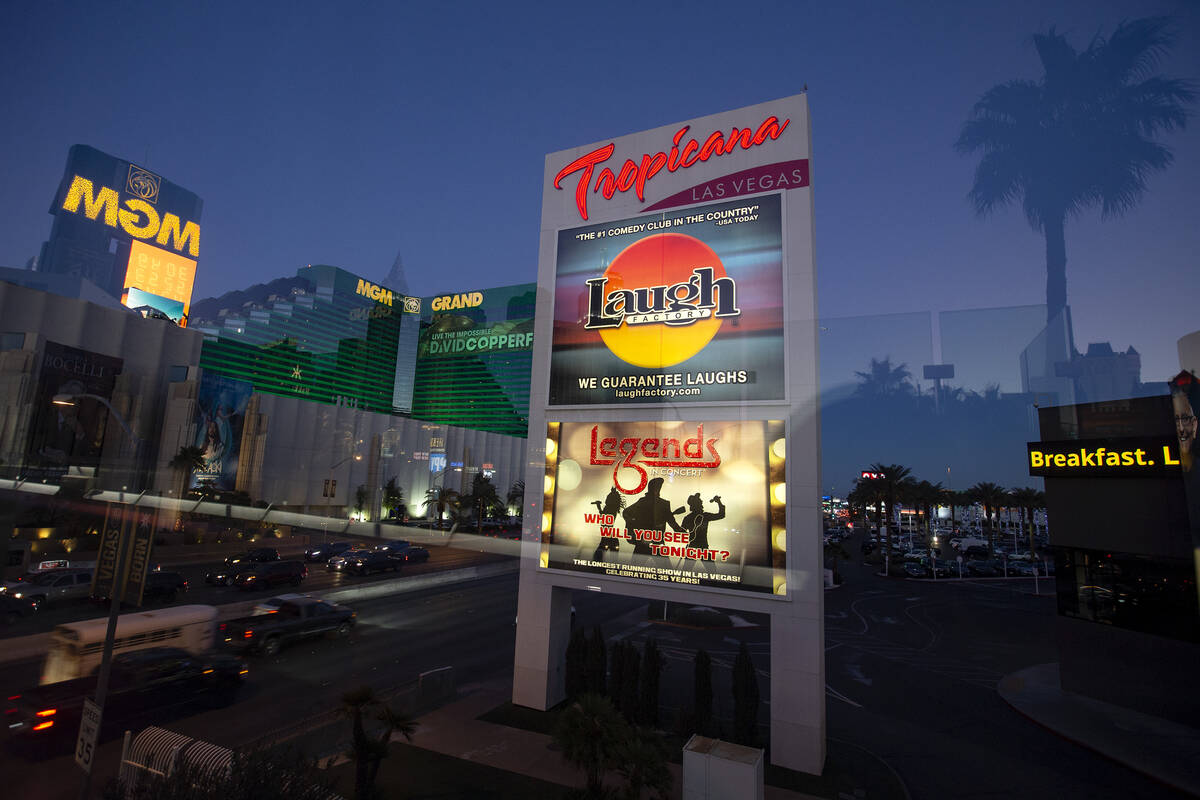 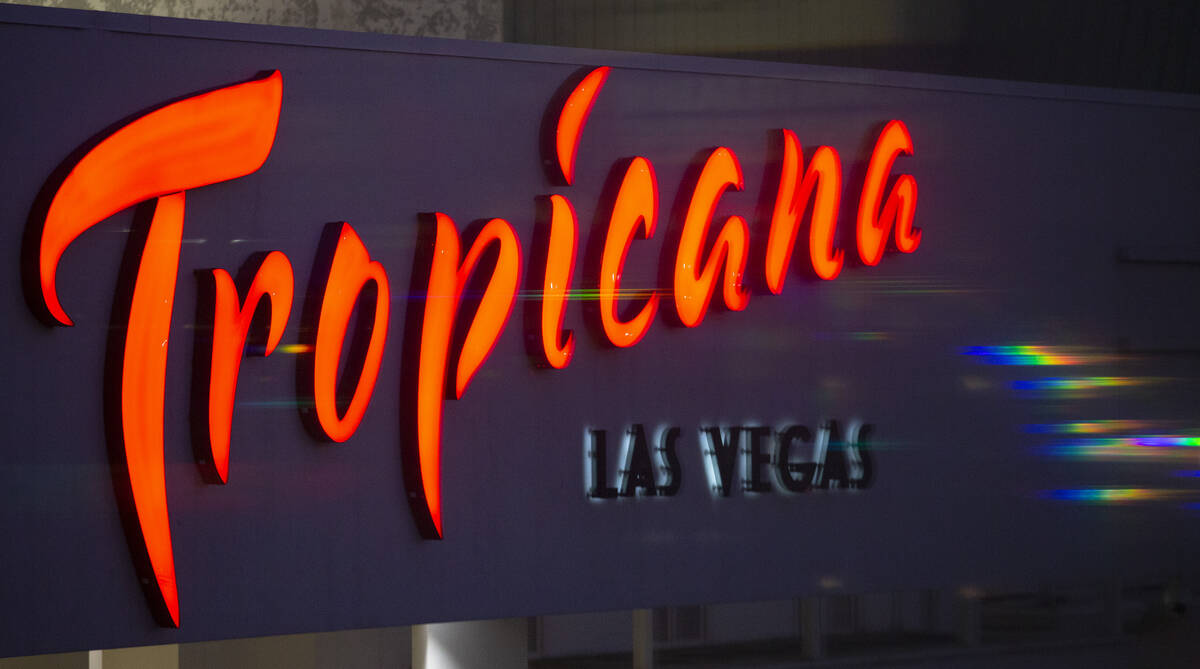 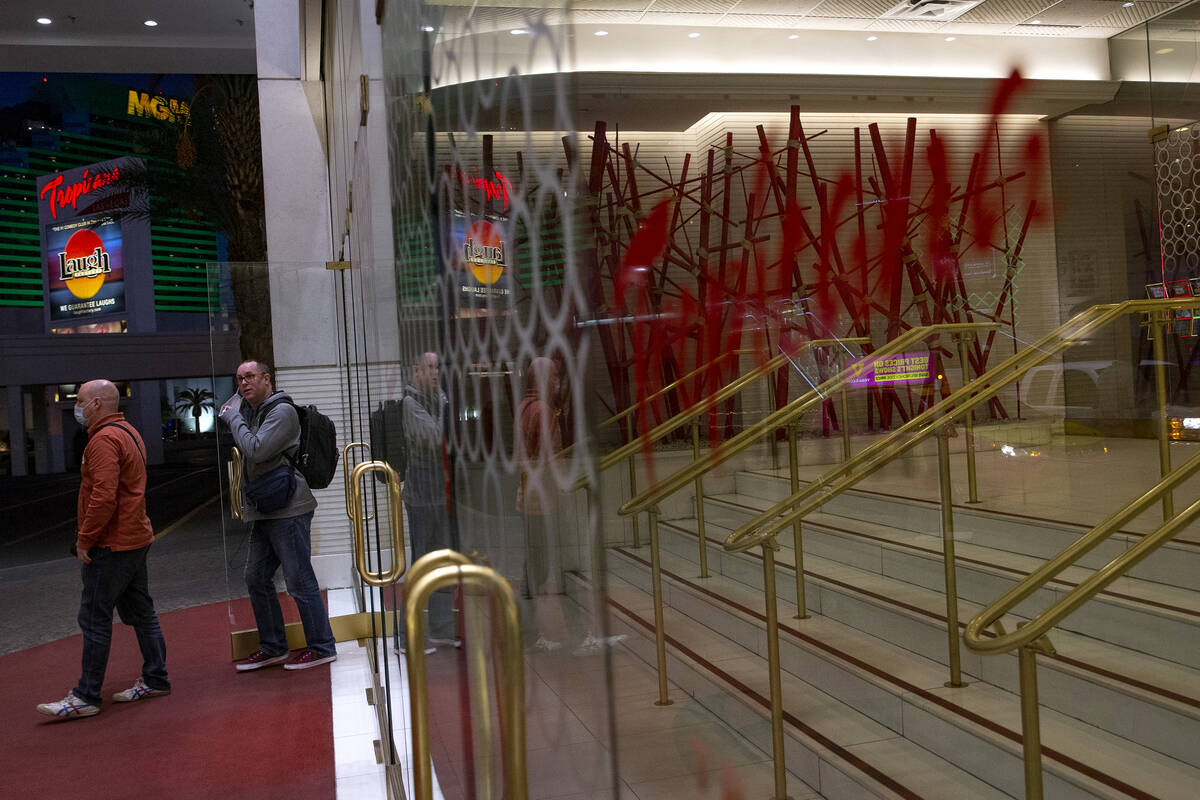 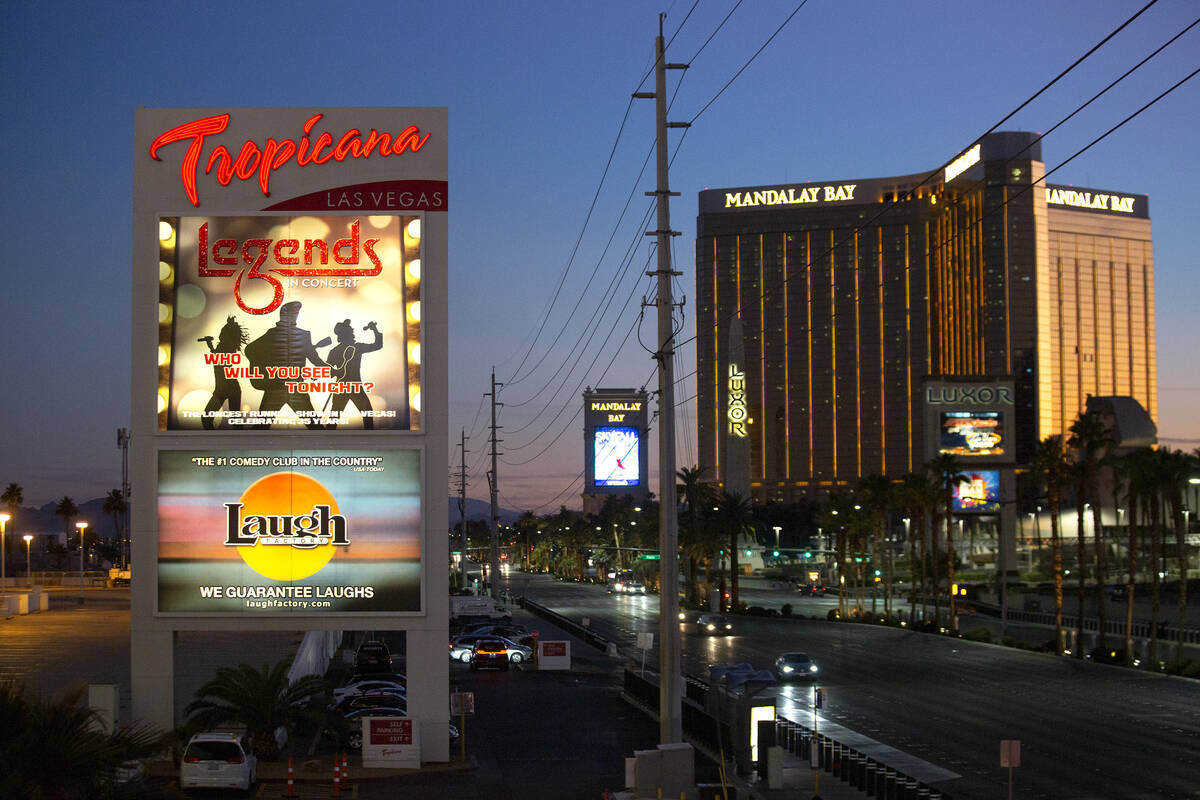 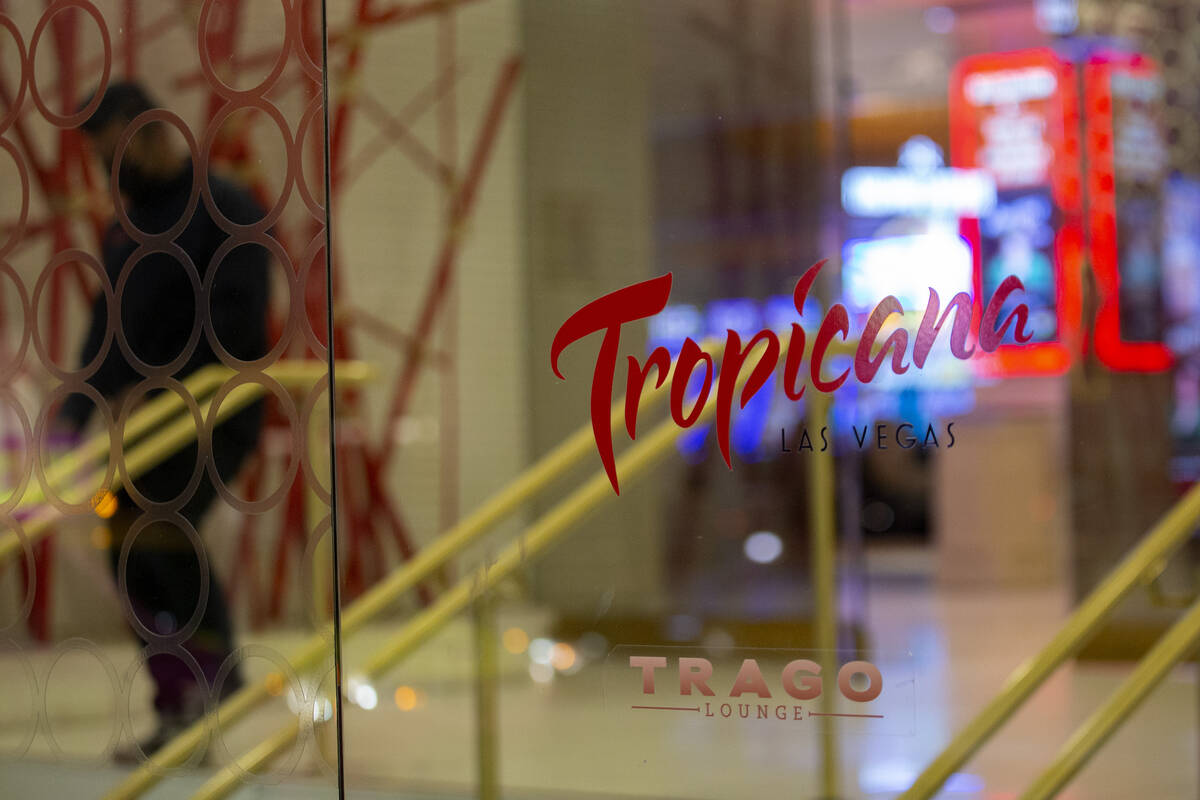 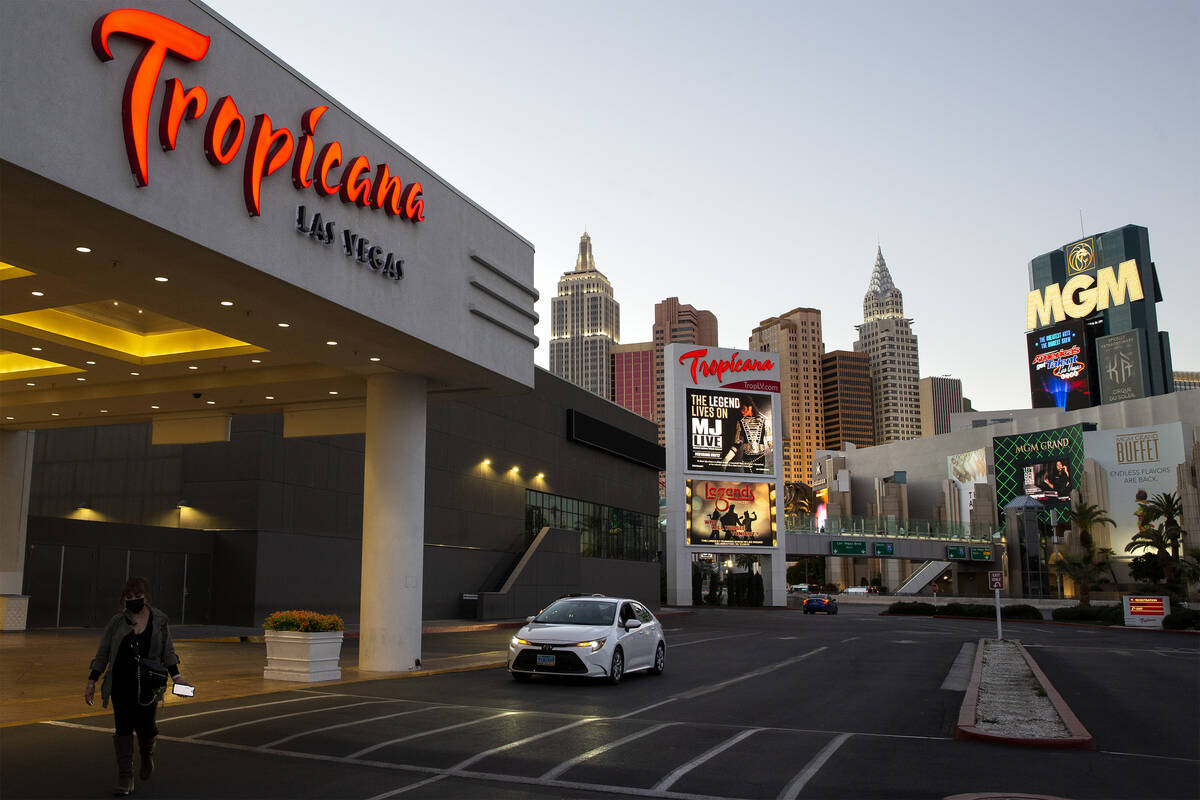 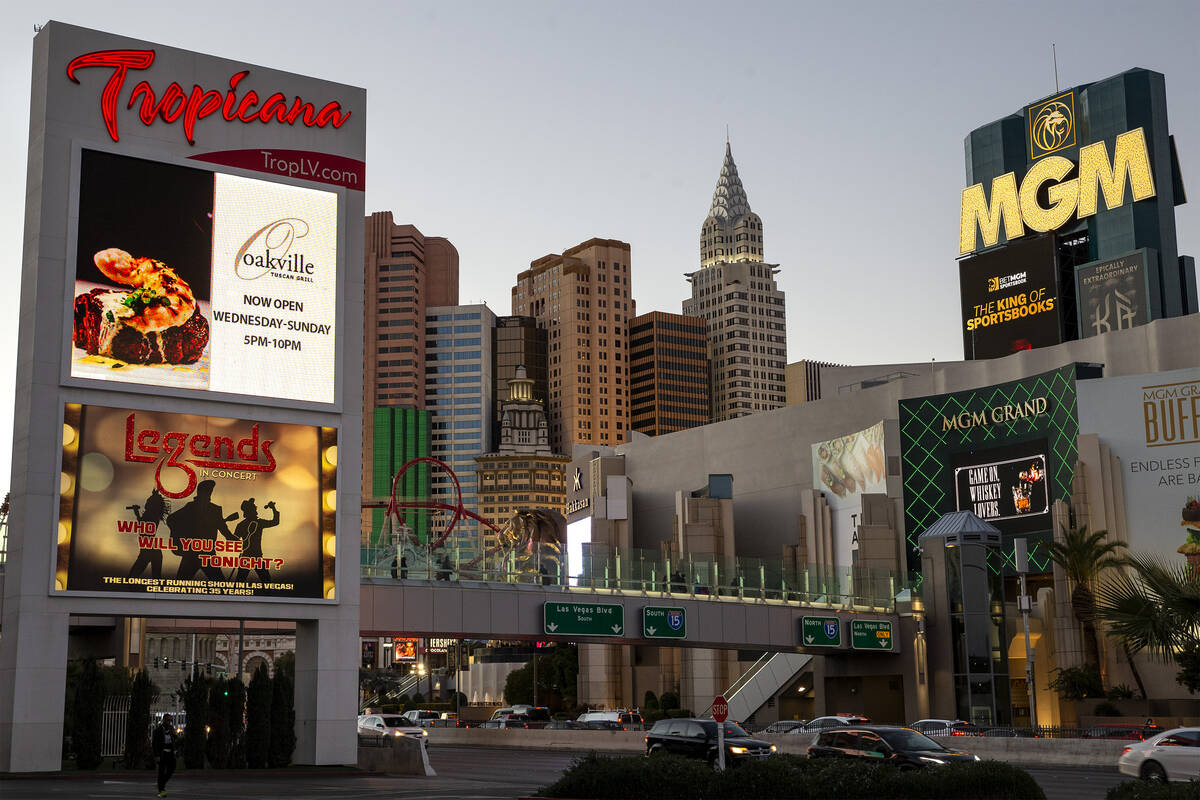 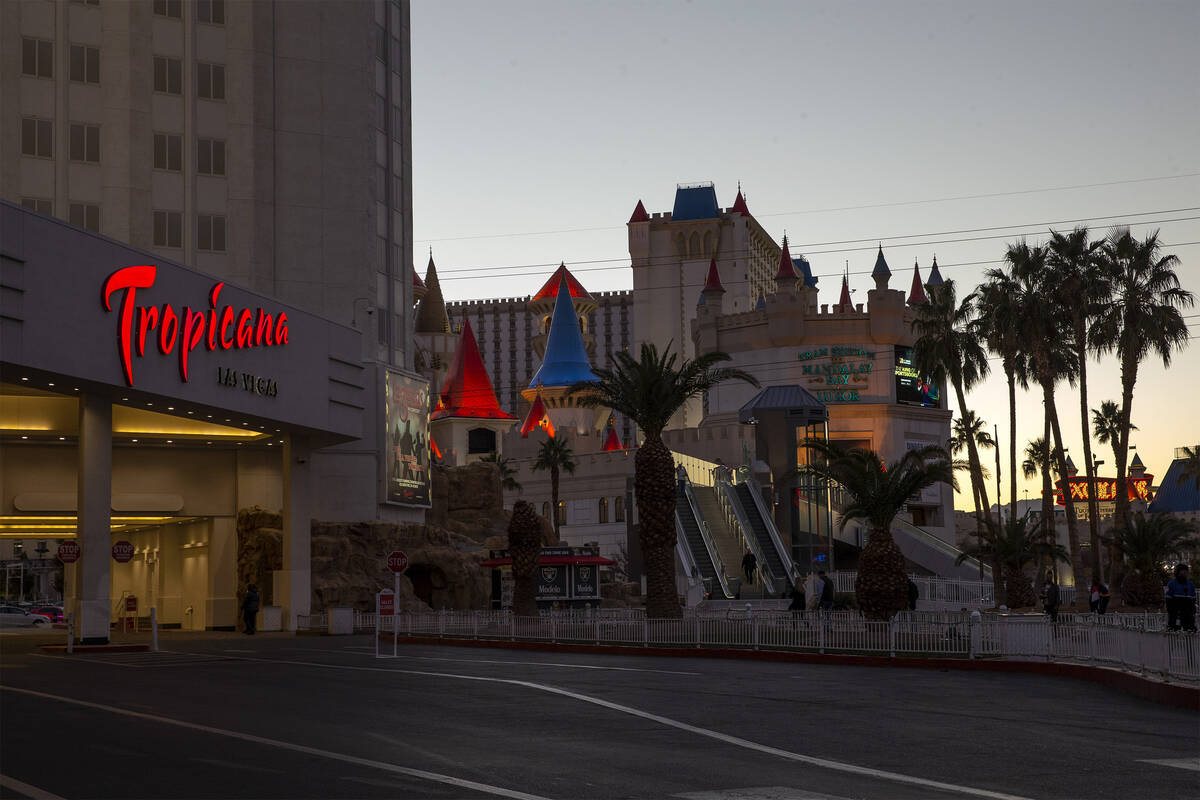 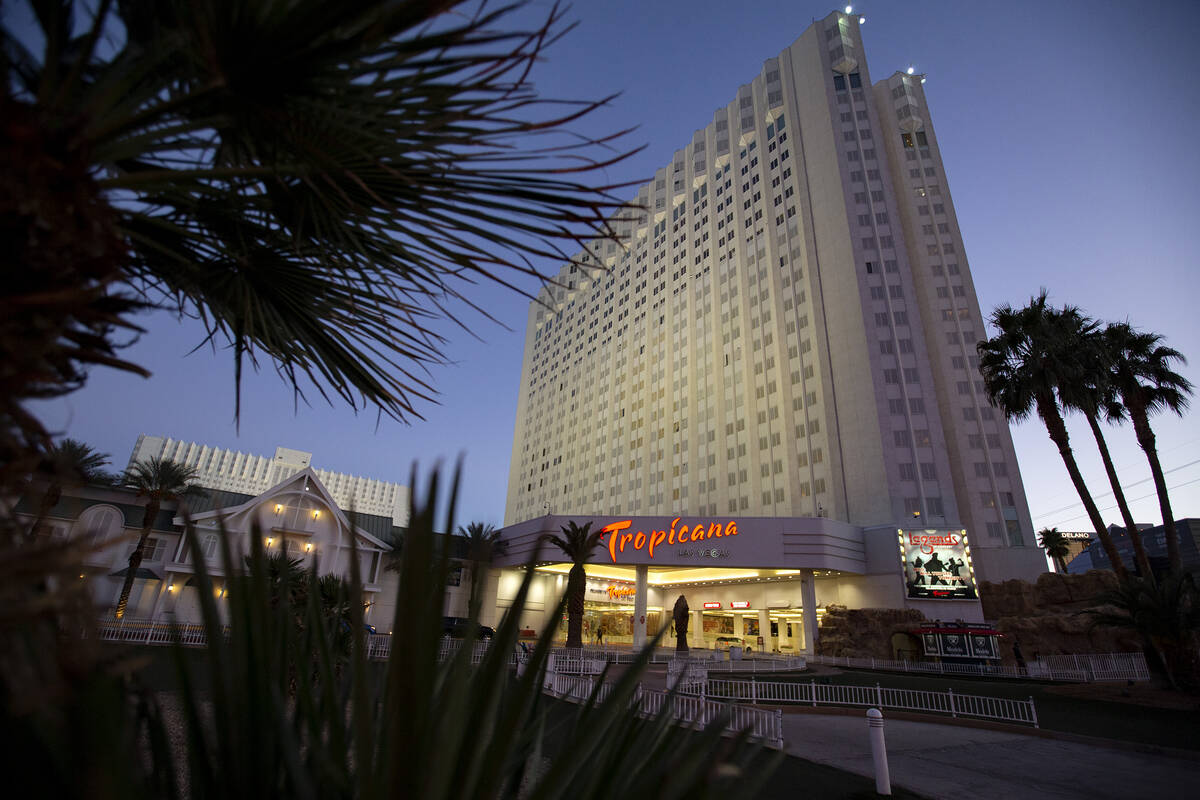 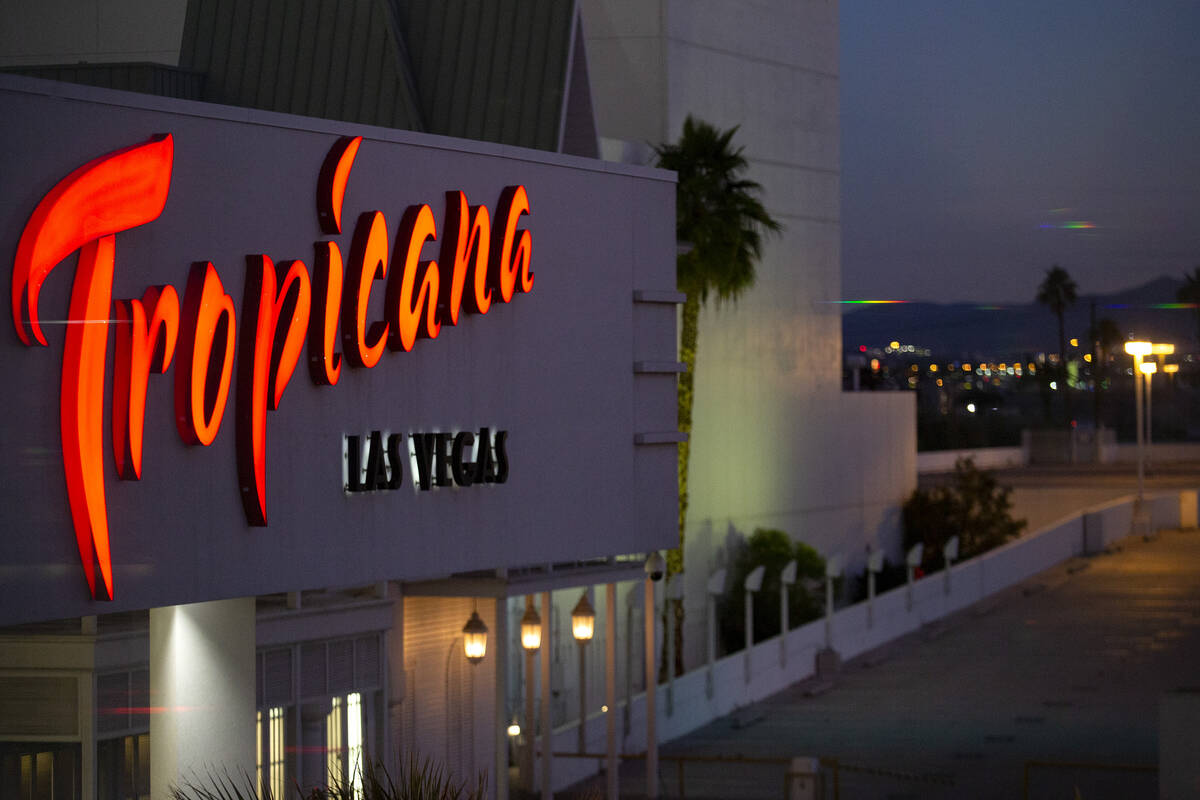 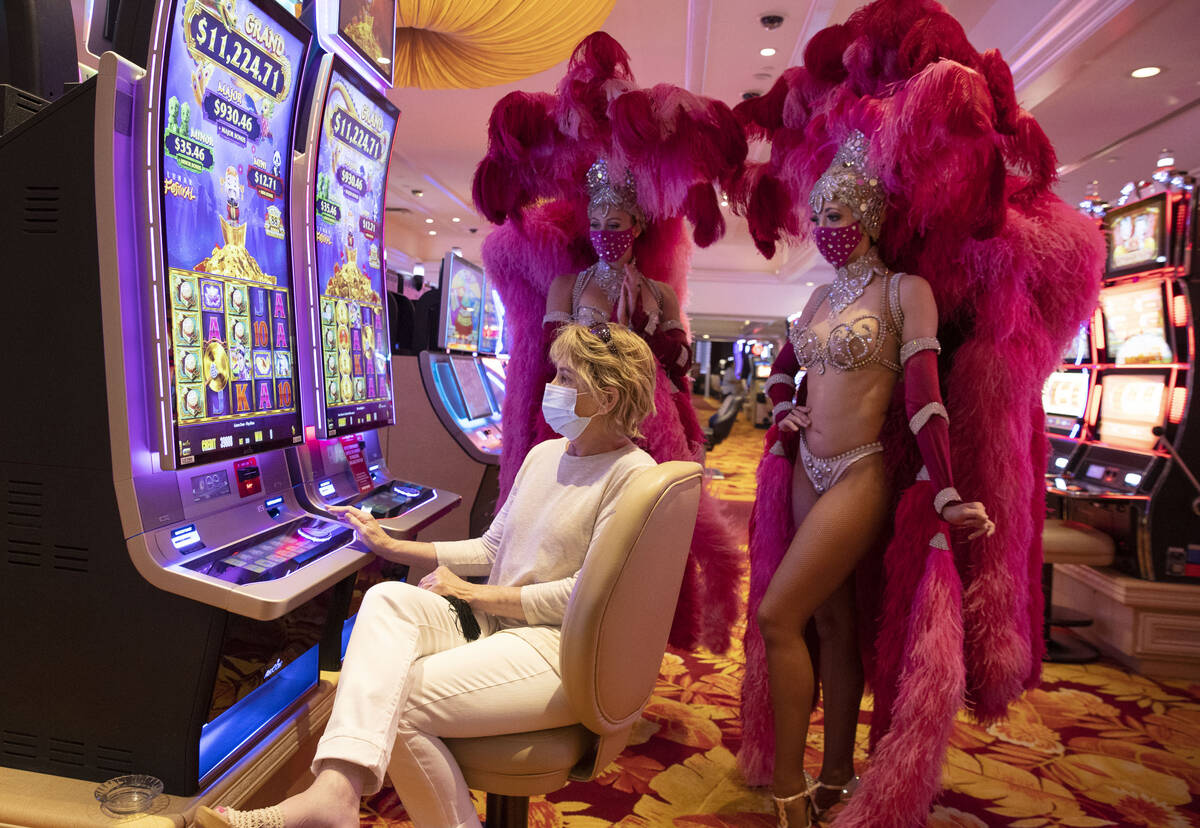 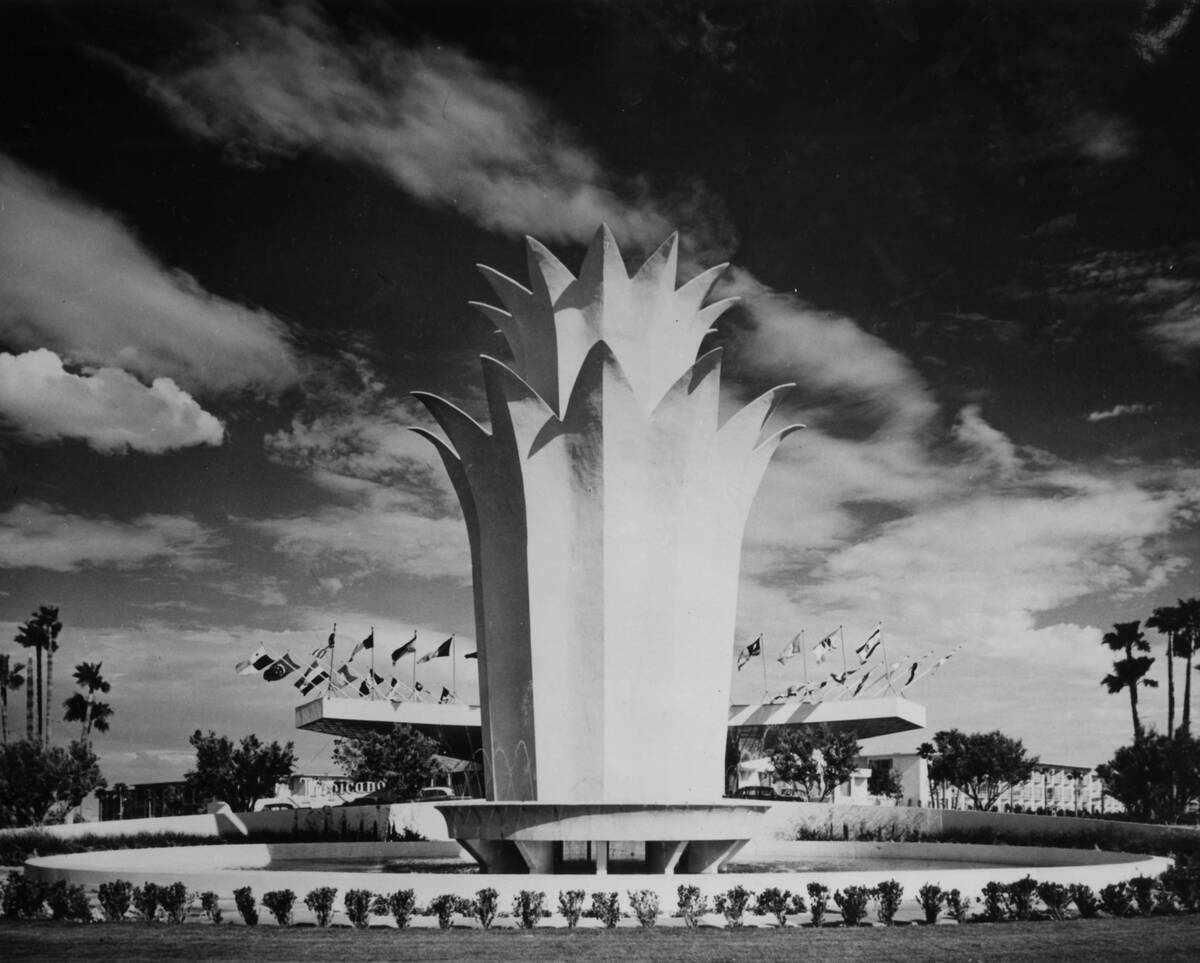 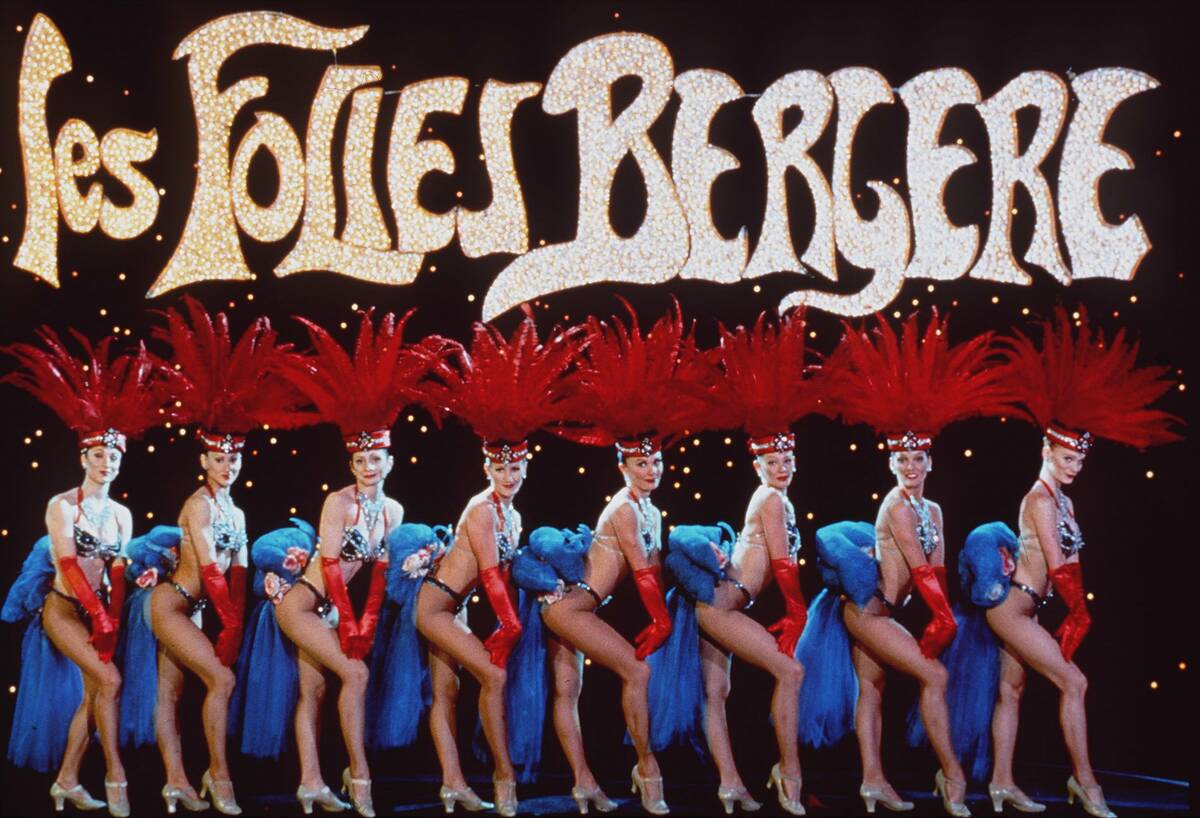 Performers in the Folies Bergere show at the Tropicana hotel-casino are seen in this undated photo. (Las Vegas Review-Journal file) 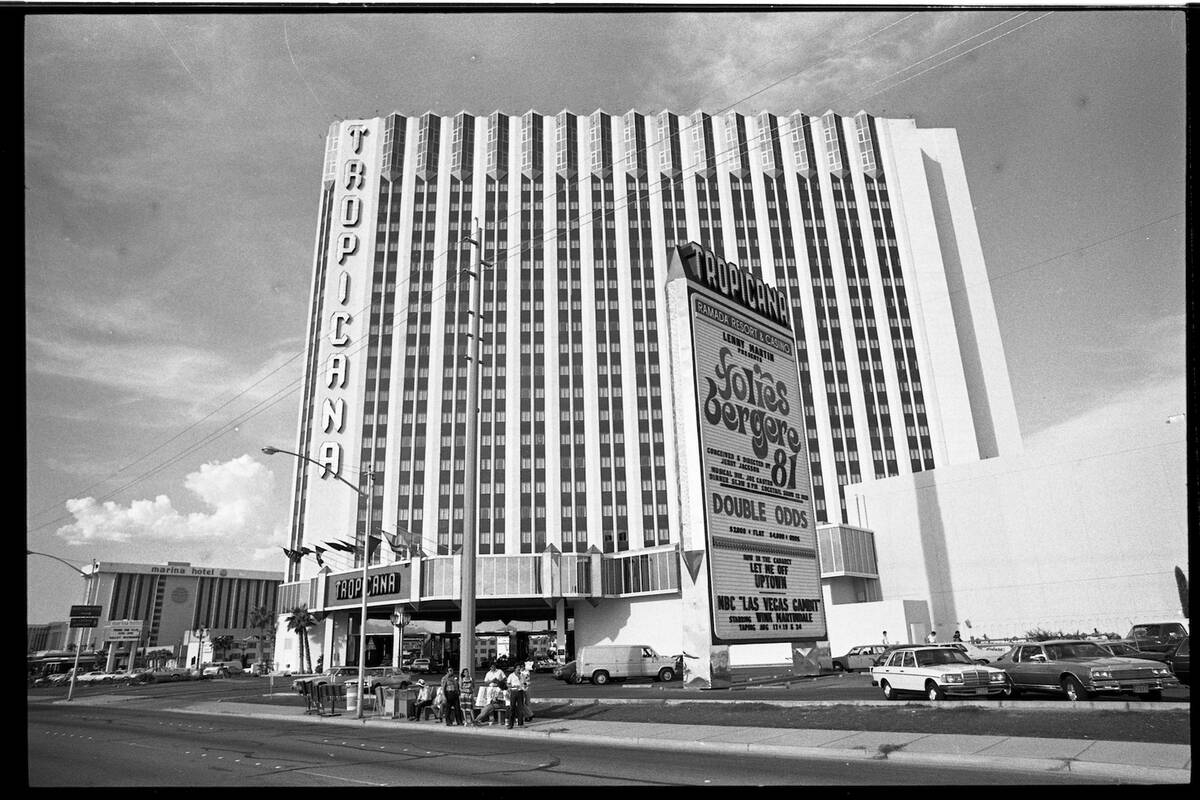 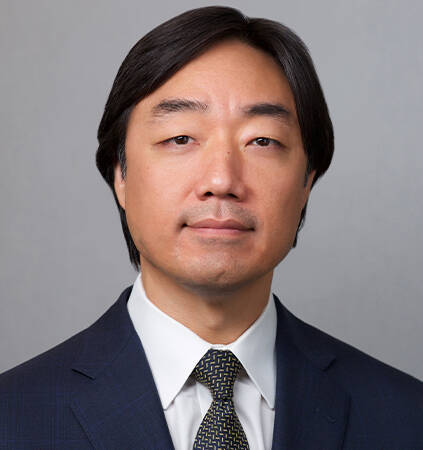 Tropicana Las Vegas, a Rat Pack-era resort with a bygone history of mob ties, could see some big changes after it trades hands this year.

Casino operator Bally’s Corp., which is buying the Strip resort, would “almost certainly” look to rename the property Bally’s and likely look to redevelop the hotel-casino, chairman Soohyung Kim told the Review-Journal.

He said management has not determined what it will do with the property but would consider anything from renovating the 1,470-room resort to “knocking it down and starting over.”

Kim spoke with the Review-Journal on Wednesday, the day after he unveiled an offer to buy out Bally’s, a publicly traded company based in Rhode Island with casinos in several states.

Kim, managing partner of Standard General, wrote a letter Tuesday to Bally’s board of directors offering to buy the shares his New York investment firm doesn’t already own for $38 apiece, saying this represents a 30 percent premium to Monday’s closing price.

Standard General is already Bally’s largest shareholder with more than 20 percent of its stock.

Kim told the Review-Journal that his buyout offer has “no bearing” on Bally’s desire to close its acquisition of the Tropicana, which he said is slated to occur within the next few quarters.

“We have some big plans that are being worked on,” he added.

The Tropicana’s possible name change follows casino chain Caesars Entertainment’s announcement Wednesday that it would transform its Bally’s resort on the Strip into the Horseshoe Las Vegas, starting this spring.

That renaming frees up the Bally’s name in Las Vegas for Bally’s Corp., Kim indicated.

“I think we absolutely will intend to use that,” he said.

A series of corporate moves led to all of this.

In April 2020, Caesars unveiled a deal to sell Bally’s Atlantic City to the casino operator then known as Twin River Worldwide Holdings. Then in October 2020, Twin River announced that it had purchased the Bally’s brand name from Caesars.

As part of that deal, Twin River said it agreed to give Caesars a “perpetual license” to use the name at its existing Bally’s hotel-casino in Las Vegas.

Soon after, Twin River said it was changing its own name to Bally’s Corp.

The renamed company announced last April that it was acquiring the Tropicana in a deal valued at about $308 million, saying the sale was expected to close in early 2022.

In April of 1957, the Tropicana opened with 300 rooms and gushing reviews from the Review-Journal, which called the hotel “palatial” and “fantastically beautiful” with “regal charm and beauty” that was “unmatched across the country.”

It featured tennis and badminton courts, a putting green and a pool with music piped underwater, according to a report at the time. The owners insisted gambling would be “secondary” at the resort, thus violating “all Las Vegas rules for parting the customer with his money,” it added.

After Costello was shot and wounded in New York in 1957, police found a handwritten note on him that outlined hundreds of thousands of dollars in casino take that “matched to the decimal point” the winnings at the recently opened Tropicana, casino historian David Schwartz of UNLV wrote in an article on The Mob Museum’s website.

Years later, the resort was one of several in Las Vegas to get screen time in the 1971 James Bond film “Diamonds Are Forever,” with Sean Connery’s 007 checking into a room there after declaring: “I hear that the Hotel Tropicana is quite comfortable.”

The Tropicana also had a long-running showgirls revue, “Les Folies Bergere,” a Paris import that ran from 1959 to 2009. By the mid-1970s, the show was overseen by Joseph Agosto.

In 1983, Agosto testified that he had “maneuvered his way into control at the Tropicana casino” so he could skim money, The New York Times reported.

“Federal officials see the case as another in a disturbing pattern of sinister criminal elements’ flouting Nevada law until Federal investigators bring them down,” The Times wrote. “They complain that the Tropicana casino’s infiltration by the Kansas City underworld is one of a string of secret casino takeovers by big-city mobs that have not been blocked by the Nevada authorities, an assertion that those authorities deny.”

Today, Las Vegas’ towering hotel-casinos have long been controlled by corporate interests, including big, publicly traded firms. The Tropicana is no exception.

Its operator, Penn National Gaming; its landlord, Gaming and Leisure Properties; and its buyer are all investor-owned companies with shares traded on the Nasdaq or the New York Stock Exchange.

A decade or so ago, the Tropicana also was one of countless businesses in Southern Nevada that faced steep financial woes after the economy crashed.

Its former parent company filed for bankruptcy in 2008, and, after the hotel sold in 2009, the resort was stuck in the red as the economy limped along, though it narrowed its losses.

Penn National bought the Tropicana in 2015 for $360 million. In early 2020, after a burst of lucrative casino sales in Las Vegas, it looked like the Tropicana could be next, as Penn President and CEO Jay Snowden told analysts that there had been plenty of “unsolicited interest” in the property.

The next month, however, the pandemic hit.

Southern Nevada’s casino-heavy economy was devastated by the coronavirus outbreak. The Strip turned into a once-unthinkable ghost town of shuttered resorts, and 33 percent of the region’s workforce was left unemployed at one point.

In April 2020, with Nevada’s casinos still in state-ordered lockdown, Penn spinoff Gaming and Leisure Properties acquired the Tropicana’s real estate for $307.5 million worth of rent credits and leased the property back to Penn.

While the pandemic is far from over, Las Vegas has come a long way since the early chaos of the outbreak, as tourists are once again crammed into restaurants and bars and onto casino floors.

Major League Baseball’s Oakland Athletics have even reportedly looked at the Tropicana property as a potential site for a new ballpark in Las Vegas.

Kim, of Bally’s Corp., noted Wednesday that the casino company is picking up 35 acres along Las Vegas Boulevard with its acquisition of the Tropicana.

He also said that Bally’s has national ambitions.

“It’s hard to be a national gaming company without a presence in Las Vegas,” he said.