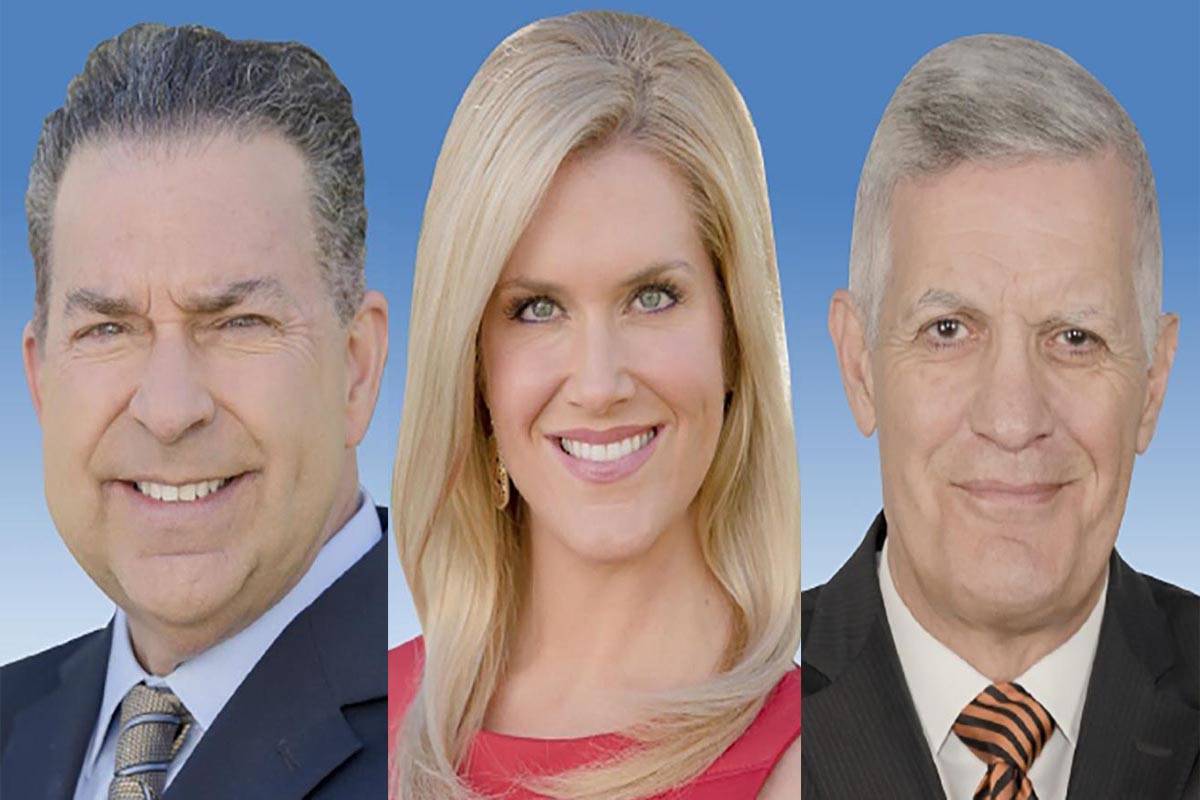 Gerard Ramalo, from left, Heather Mills and Jerry Brown were three of four KSNV-News 3 on-air personalities who were among more than a dozen staffers laid off on Wednesday, March 3, 2021, by the NBC affiliate. Amber Dixon, the fourth, is not pictured. Sinclair Broadcasting Group laid off hundreds of workers because of economic troubles caused by the pandemic, a spokesman said. (News3lv.com) 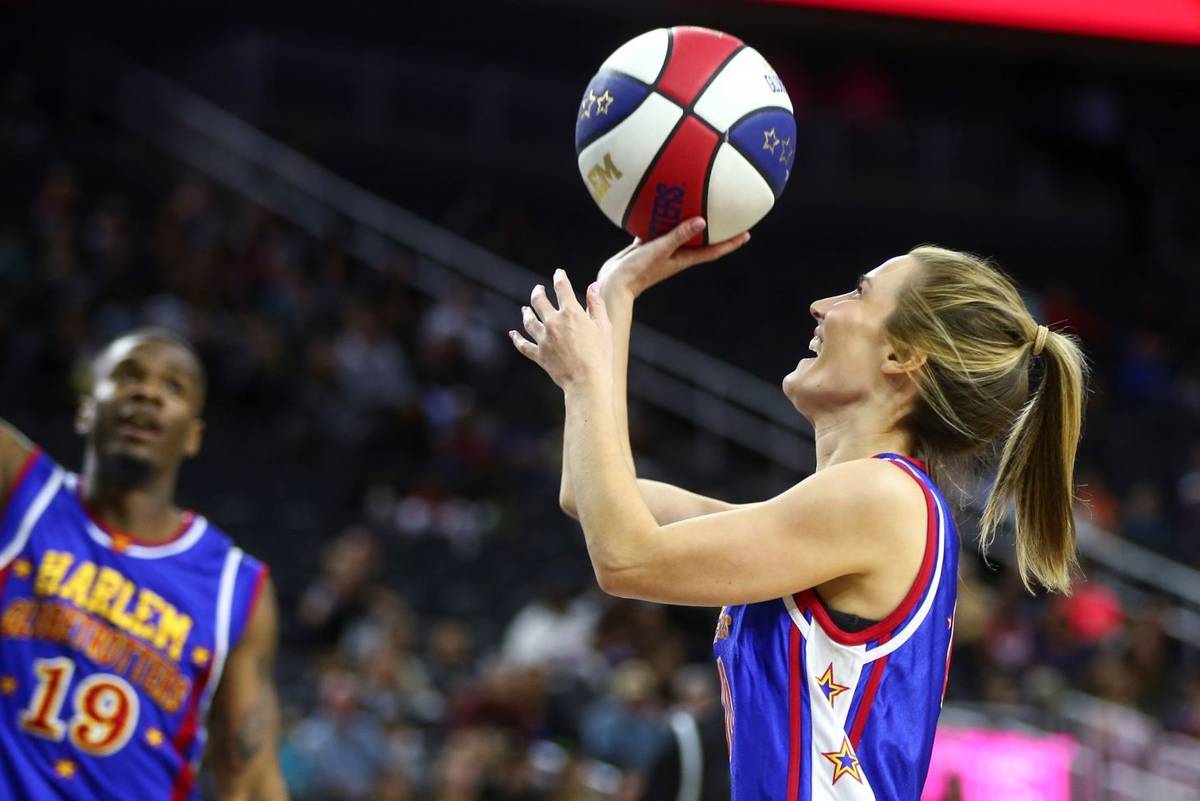 More than a dozen KSNV-News 3 employees were laid off Wednesday as one of the nation’s largest television broadcasters eliminated hundreds of jobs around the country.

Efforts to reach station management for comment have been unsuccessful.

Eight employees under the newsroom umbrella, including the four broadcasters, have left the station. The others were from departments such as sales and promotions.

Came as a shock

The moves were a shock to those who were let go. Even as late as Thursday morning, the station aired a promo of Mills’ weekend report from Brian Head, Utah, though she was informed the previous day she was no longer employed at the station.

Ramalho said he was asked to attend an afternoon meeting and felt it was a companywide or staff session.

“When I was the only one in the meeting, I knew it was something different,” Ramalho said Thursday morning. “But I am OK, seriously. I’ m optimistic about what’s next. I am truly grateful for my years at Channel 3. I’m more excited than people might think, and I might try something new, maybe somewhere new. I am looking forward to it.”

Ramalho, who has won five Emmy Awards, had been with NBC-affiliated News 3 for nearly 21 years while Mills joined News 3 in 2016, according to news3lv.com. Dixon worked as a news reporter when hired about eight years ago before switching to sports anchor/reporter. Brown had been on the air in Las Vegas for nearly 30 years and was a 2009 inductee into the Nevada Broadcasters Hall of Fame. Ramalho is also a member of the hall of fame.

Of his Channel 3 colleagues, Brown said, ” I wish them well. I had great experiences there.”

“I really loved working at Channel 3 and The CW,” Mills said. “I loved working with my news director, the people in Las Vegas have been wonderful. It is my home. I can’t take it to heart, it’s heartbreaking, but I know it it was not performance-based.”

Moving forward, she said, “It’s going to be really tough. It’s not a great time to be looking for jobs in TV.”

That's a wrap. Thank you Vegas & So Nevada for EVERYTHING. This city has so much ♥️. I was truly blessed to do what I love alongside people I consider not only talented-but real friends.

I was among those laid off by Sinclair. But, this isn't goodbye. It's just a new chapter❣️ pic.twitter.com/tQzgLKG92O

Dixon texted Thursday morning, “I’m fine. Yesterday, I was shocked.” She said that after receiving the news, the first thing she did was an online search of “Sinclair.”

“The first item that came up under “News” was a headline that read, ‘Sinclair Broadcast Group Profit Pops; Earns Key Rating Upgrade,’ ” Dixon said. “It’s confusing and disappointing, but I’m grateful for my eight and a half years at Channel 3. I’m now a free agent.”

Citing the pandemic, the Baltimore-based Sinclair Broadcast Group said it was reducing its 9,211-person workforce by approximately 5 percent, meaning about 460 people nationwide will lose their jobs.

“The impact of the COVID-19 pandemic continues to be felt across all sectors of the economy, something that can have a profound impact on a company as diversified as ours,” a Sinclair spokesperson told CNN Business in a statement. “From local businesses and advertisers to distributors and partners, no component of our business’s ecosystem has been fully shielded from the impact of the global pandemic.

“In response to this, we are currently undergoing enterprise-wide reductions across our workforce, including corporate headquarters, to ensure we are well-positioned for future success,” it said.

Las Vegas Mayor Carolyn Goodman texted Thursday afternoon in support of those who left the station, describing them as “breaths of fresh air “and saying, “So positive, truthful, non-political and genuinely part of our Las Vegas family. To lose Gerard with five Emmys, Jerry, Heather, Amber from reporting the news on Channel 3 is the deepest blow to the city of Las Vegas.”

Sinclair purchased KSNV from owner Jim and Beverly Rogers in 2014. Jim Rogers acquired the station in 1979. The station also operates several Las Vegas sister channels, the main being The CW.

Sinclair had expanded more heavily into sports broadcasting before the pandemic and struggled when professional sports seasons were cut short or postponed last year, the Baltimore Sun reported Thursday.

The company reported a massive loss for the third quarter, which ended Sept. 30, as it wrote off a chunk of the value of regional sports networks it bought in 2019 for $10.6 billion. Sinclair lost $3.2 billion for the July-to-September period as it took a $4.2 billion charge to goodwill and intangible assets due to the pandemic.

Sinclair Broadcast Group was trading down 32 cents at $35.43 on the Nasdaq shortly before the close Thursday.