Expect the future of technology to make life even easier for humans, like robots dispensing medication, self-driving tractors for farmers and, yes, flying cars.

Those products and more will be introduced this week at the CES all-things-tech trade show, which kicks off Tuesday and runs through Friday in Las Vegas.

More than 170,000 people are expected to descend on Las Vegas for the four-day technology show, Southern Nevada’s largest annual trade show by space and attendance. CES is open to the technology industry but not the general public.

Here is some of what’s to come:

At an event Sunday, Samsung debuted its Q950TS QLED 8K television, which nearly eliminates the border around the screen. Its screen-to-body ratio is nearly 99 percent, which Samsung claims is the largest in the market.

Measuring 15 millimeters, the Q950 is thin and has deep learning abilities through the company’s AI.Quantum chip, which recognizes and adjusts to environmental changes such as dark or bright lighting, restores lower-quality video to 8K resolution and more.

The screen also includes Object Tracking Sound+, or OTS+, technology that produces sound that matches the movement of images on the screen. And the Active Voice Amplifier feature adjusts the volume of dialogue in response to background noise, like a blender or vacuum cleaner.

Samsung is just one company looking into 8K televisions. Earlier in the day, representatives of the Consumer Technology Association, which sponsors CES, shared projections that the average TV screen size in 2022 would be 50 inches and have 8K resolution.

According to a forecast from the show sponsor, digital health devices are set to be a $10.6 billion market in 2020.

Las Vegas physician Dr. Samir Qamar introduced the MedWand. Likening it to the tricorder device from “Star Trek,” the MedWand combines a stethoscope, thermometer, electrocardiogram and about seven other diagnostic devices in one hand-held item. The pocket-size device allows patients to be analyzed by their doctors from anywhere in the world.

“Stroke survivors can work on their restabilization as well as rebalancing,” he said. “Patients, patients’ family and clinicians can monitor the progress all together.”

DNANudge introduced a wearable tracker to analyze activity and determine which food brands are best for an individual’s body. Users enter a saliva swab into a cartridge mailed to their home that will examine which chronic diseases the person is most likely to develop.

The wearable bracelet, or DNABand, will then update based on daily activity and tell users which foods and brands are healthiest. Dr. Maria Karvela, the chief scientific officer, who developed the data, said she scanned various brands of salted peanuts to explain how some bar codes flashed a green light on her DNABand and others a red light, indicating what her body should be consuming.

“DNA is one thing. It’s fixed, but by having an active lifestyle, then you can overcome it,” she said.

Also on display Sunday was the Mateo health mat, a device that replaces the bathroom scale with additional high-tech features.

The mat has 7,000 sensor points and based on a users posture on the mat, it will produce health tip recommendations, foot advice, exercises and other tips. The mat will be available later this year for $179, said company co-founder Lenny Dahan.

Baby tech and digital health producer Jill Gilbert said consumers are living in an era that is transforming parents’ lives.

Lovot is a human companion robot that runs around the home and squeals for attention. Lovot, produced by Tokyo company GROOVE X, focuses on physical contact by giving off warmth in an 18-inch, fuzzy, penguin-shaped creature. Using facial recognition in the one billion eyes around the body, Lovot will roll toward loving faces.

This is LOVOT, a robot created by GROOVE X as a human companion. He has one billion types of eyes, according to the company‘s website. #ces2020 #CES pic.twitter.com/4FKApmvg0G

The creature will run around memorizing the layout of a home for 45 minutes before rolling itself back to the charger for 15 minutes.

Lovot expects to expand to China and then the United States within a year.

Pollen Robotics’ interactive robot can play tick-tack-toe. Company co-founder Pierre Rouanet expects it to be able to do much more in the future.

This will be the 10th year fitness and wearable tech has been featured at CES.

Herberto Calves, president of MyxFitness, announced the company’s newest offering: a digital-only service on Apple and Android devices that will start in April.

This comes after the company announced the launch of its in-home fitness equipment and on-demand digital classes in November.

Julie Sylvester, a producer for sports and fitness tech, also ran through a list of new product launches in this category, including the Manta5, a “half bike, half plane jet ski” that replicates cycling on water; the brain-computer interface BrainUp; the LifeLeaf noninvasive glucose monitor; the Orcan Hear class of wearable AI, which augments and integrates with hearing aids; Circular, a smart ring with biometric tracking; and Tech Air, a motorcycle jacket with a five-airbag system.

There’s also the Ivea Twin C smartwatch that collects environmental data and shares it with climate change scientists, and Wearin’, a wearable connectivity solution that maximizes safety and performance of humans in industries like construction and health care.

“We are CES-ready to move into the wearable tech future,” Sylvester said.

Robin Raskin, founder of Living in Digital Times, said the spread of 5G service will help the retail industry move toward “frictionless retailing,” when consumers make a purchase without cash or a credit card — similar to ordering an Uber or Lyft through an app.

She also mentioned a move toward personalized shopping experiences, when companies use data to tailor products and create more satisfied and loyal consumers.

McGill introduced the next generation of Neutrogena Skin360. The free app can process over 100,000 skin pixels and recommends skincare products.

“Looking at our consumers, not one is the same,” McGill said. “We’re here to help our consumers understand how to manage their skin and achieve their best skin health.”

BluArmor was designed to bring car-like comfort to motorcyclists, according to spokesman Arvind Prabhakar.

“When you buy a car, you never stop to wonder whether it will come equipped with air conditioning or a stereo system, right?” Prabhakar said Sunday evening. “That’s what we want to bring to motorcyclists.”

Made in India, BluArmor helmet attachments come equipped with two key components: a fan with a water-based filter and a bluetooth click pad.

Once the filter is dunked in water for 10 seconds, it can cool down the airflow through the fan for about an hour before it needs to be soaked again, Prabhakar said. The fan has a battery life of about 10 hours, depending on which of the three fan speeds are used.

“Nowadays, everyone has a phone,” Prabhakar said. “We want to make it easy for motorcyclists to have the ease of a car, with nothing more than their helmet, their bike and their phone.”

The click pad connects to a user’s phone via Bluetooth and allows cyclists to listen to music, hear their messages read to them and dictate message responses, Prabhakar said.

The electric-powered SUV starts at $45,000 and has a 250-mile range. It is slated to go into full production later this year and go on sale in China.

U.S. sales of the M-Byte are slated to begin in the second half of 2021, first in California and online.

One of the most prominent features of the M-Byte is its massive 48-inch-long dashboard screen. The screen can display such things as photos, the weather, sports scores, stock prices and directions, and it can display multiple items at once.

The Wello solar-powered electric tricycle is a small service vehicle that can be used to run corporate errands in a large plant. Representatives of the French company distributing the vehicle say it can go 15 to 20 mph and will cost about $7,800 (U.S) each.

Watch Circa grow — from dirt to 44 floors in 20 months
By Richard N. Velotta / RJ 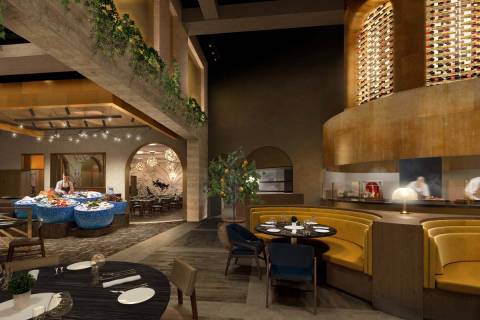 Aaron Ford, the state’s top law enforcement officer, formed a task force with the U.S. Attorney’s office in April to crack down on COVID-19-related scams.