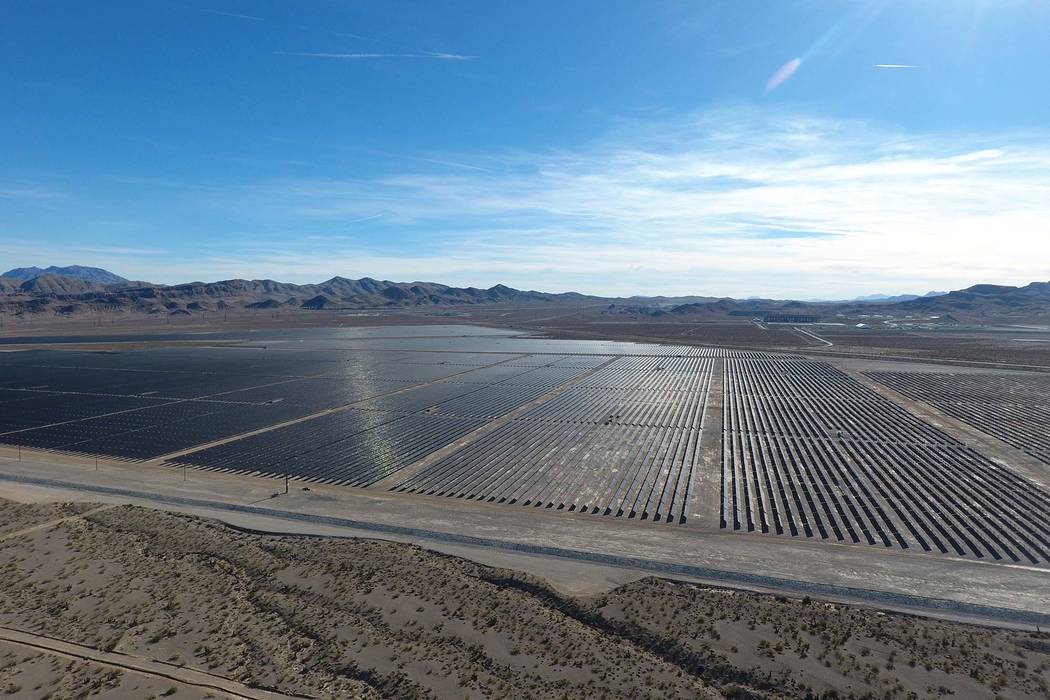 The company and its partner on the project, global asset manager Capital Dynamics, have called Gigawatt 1 the largest solar project in the country, according to a statement Wednesday.

Switch CEO Rob Roy has been working on the project for about three years, according to the statement. The companies have started construction in Clark County and expect to start all phases of construction in the state by January 2020.

The two companies plan multiple solar projects of this kind in both Northern and Southern Nevada, with potential to export energy to the rest of the Western United States.

Gigawatt 1 will produce the lowest priced solar power in the world and generate enough energy to power 1 million houses, according to the statement.

Switch will be a customer of the solar project along with developing it. Customers will pay 4.9 cents a kilowatt hour for energy from the project, according to the statement.

In 2016, a U.S. household used 10,766 kilowatthours for the year on average, or 897 kilowatthours a month, according to the U.S. Energy Information Administration.

Switch and Capital Dynamics, which has offices worldwide, have been pitching the Clark County School District to leave NV Energy and join their solar project.

The move could save the district $140 million over 20 years with an exit fee, paid by the solar project developers, to NV Energy of up to $80 million.

Switch became the first company in years to file an exit application with the state’s Public Utilities Commission in 2014. The data center company ultimately paid a $27 million fee to leave the NV Energy system and purchase energy on the open market. Some gaming properties followed suit.

“NV Energy welcomes additional investment in the state of Nevada’s renewable energy industry, including the project announced by the Switch team today,” Caudill said. “These investments benefit the communities where they are located through job creation and other ancillary economic development benefits. Nevada has a great natural resource, the sun, and it is exciting to see these kind of projects being announced.”

Some Switch clients will also become customers of the solar project, according to the statement. Switch stores data for companies including movie studios, casinos, video game developers and government agencies. Its largest client is online retail giant eBay.

Renewable energy advocates praised the project’s announcement. In the same statement announcing the project, Greenpeace senior information technology sector analyst Gary Cook said the project shows companies can work together for the benefit of the planet and economy. In the group’s latest annual report on green technology companies, Greenpeace called Switch a leader among data centers for renewable energy and aggressive for challenging NV Energy.

Despite the highest drop in number of solar energy jobs in the workforce, Nevada ranked 10th among the 50 states and Washington, D.C., for total number, according to the latest annual report from The Solar Foundation nonprofit.

Nevada reported about 7,000 solar jobs for 2017, down 22 percent year over year. Solar jobs represented less than a percent of the state’s overall workforce, according to the D.C.-based Solar Foundation.

California ranked No. 1 and Alaska ranked last for total number of solar jobs. Delaware saw the highest increase in solar jobs with 51 percent. The state reported 549 solar jobs for 2017.

The order requires NV Energy to charge the same fees to customers regardless of whether they use solar. Solar users also get compensation for excess solar energy that they don’t use through a credit on their bills.