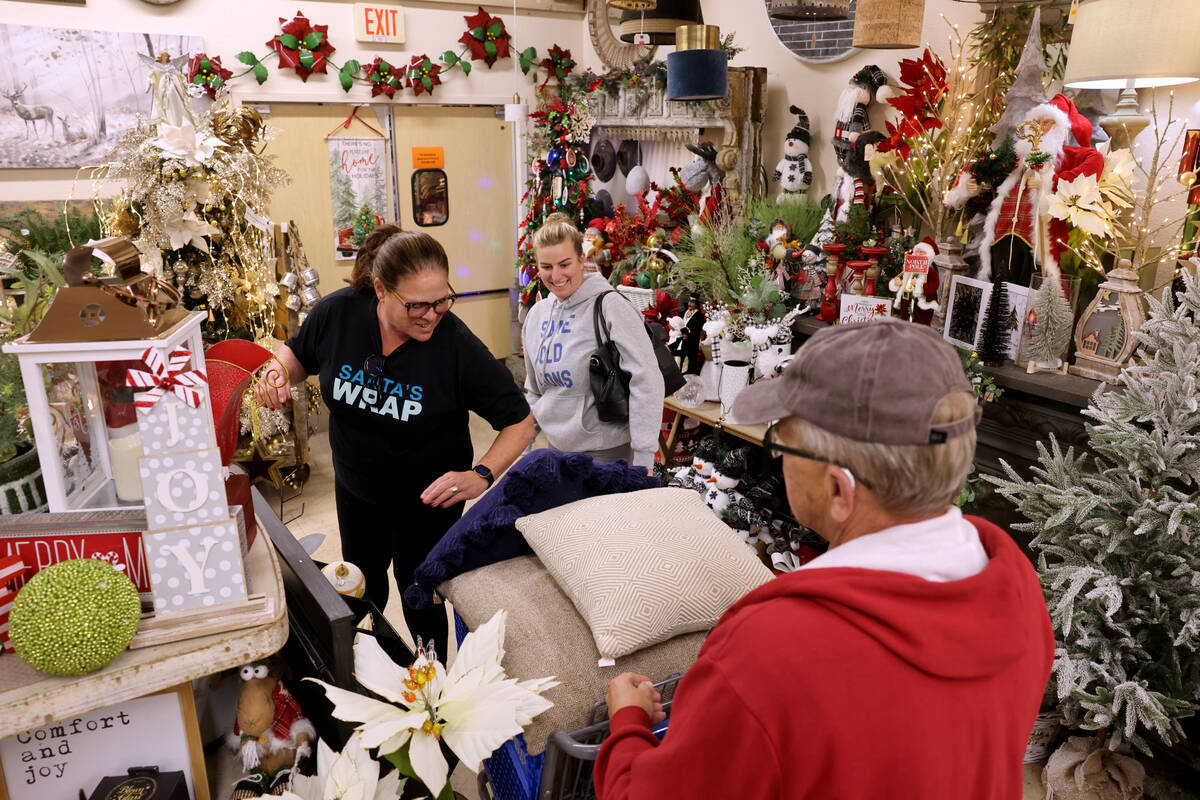 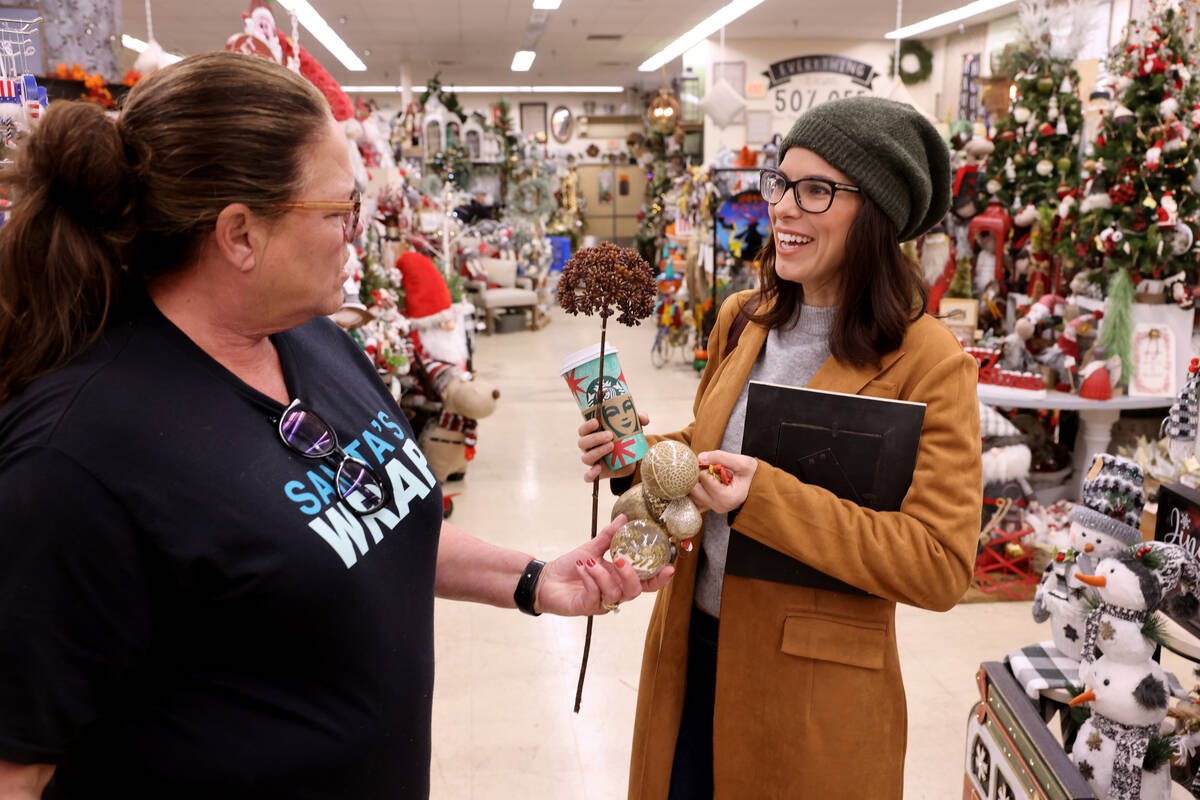 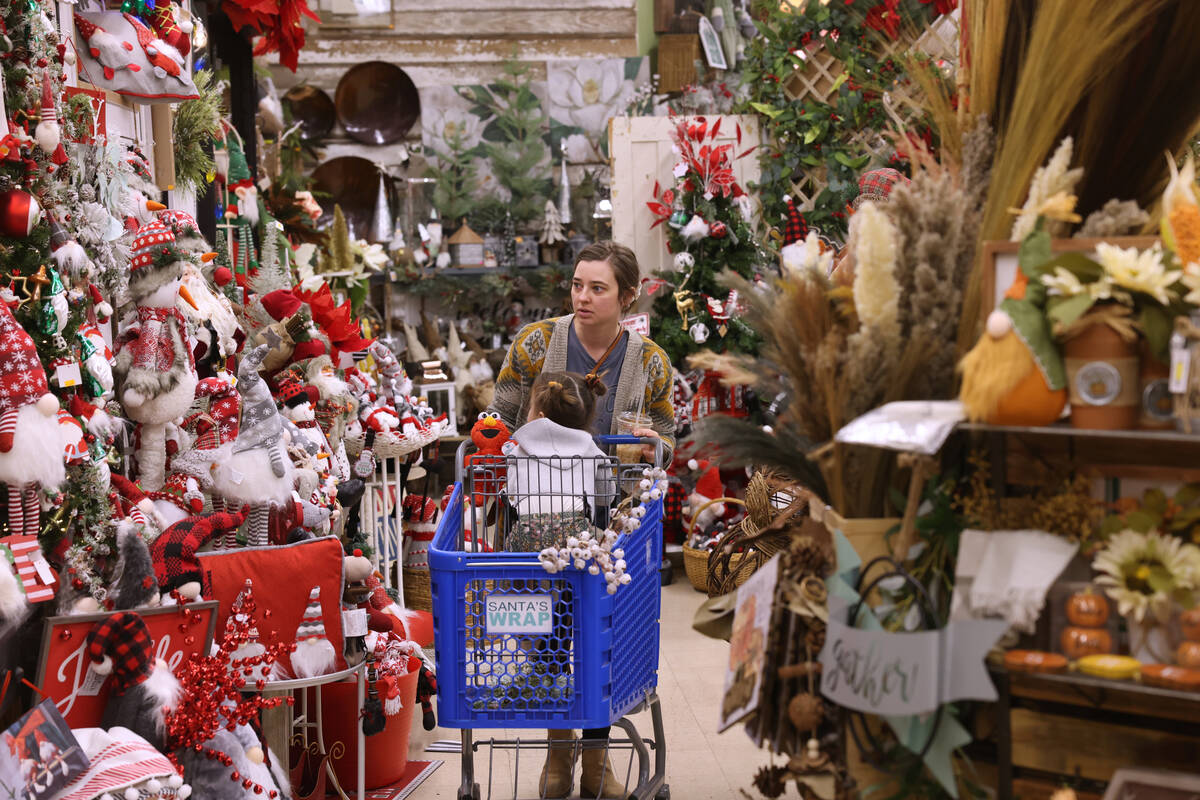 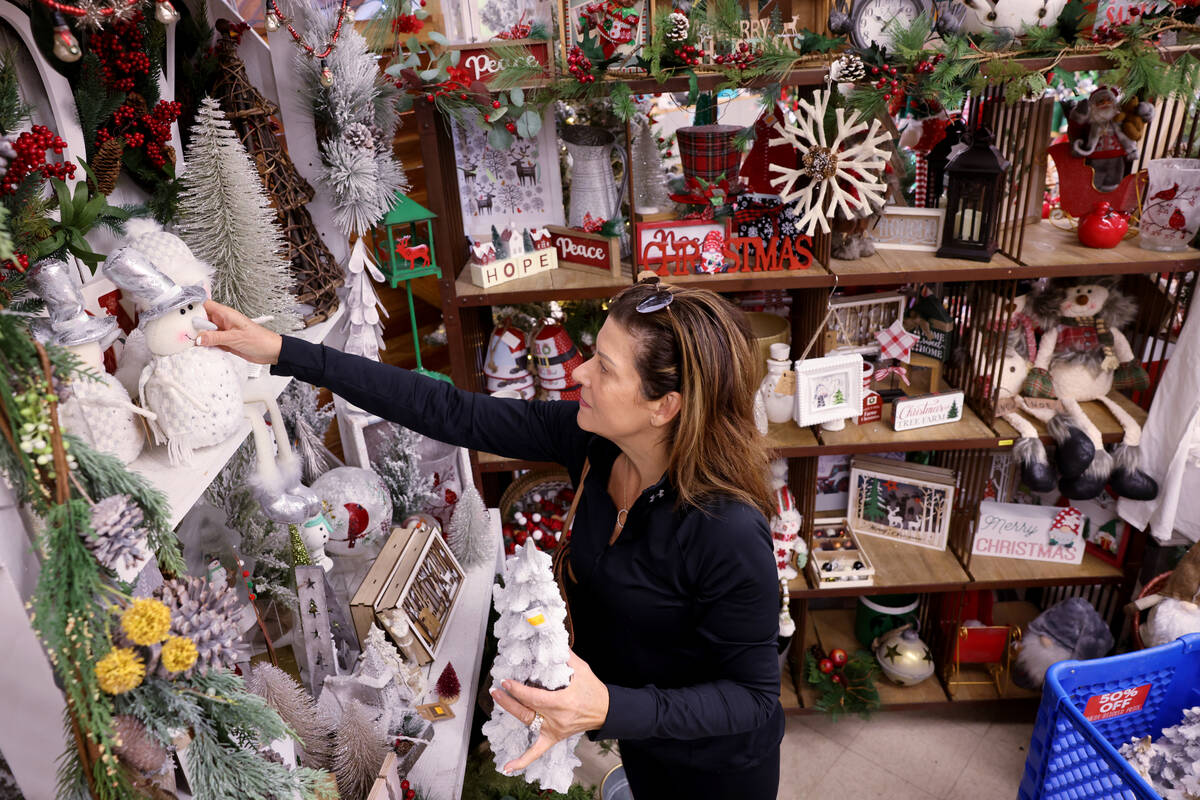 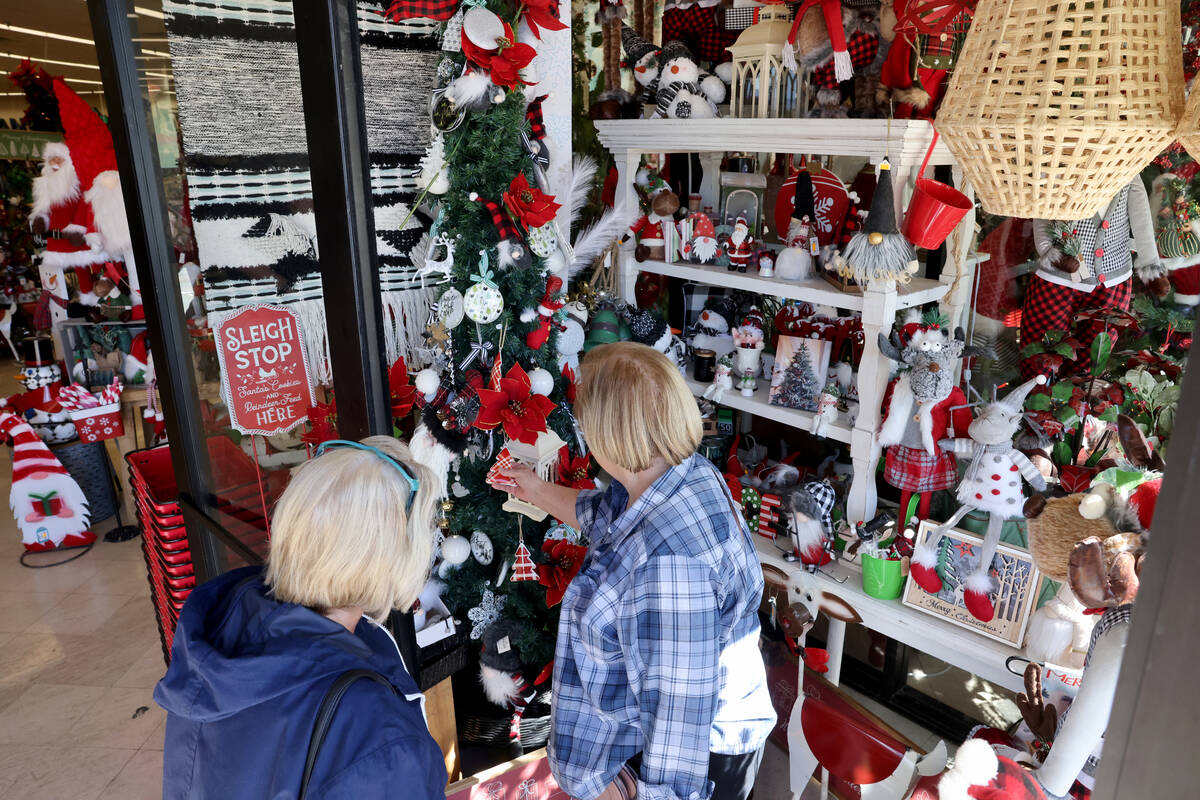 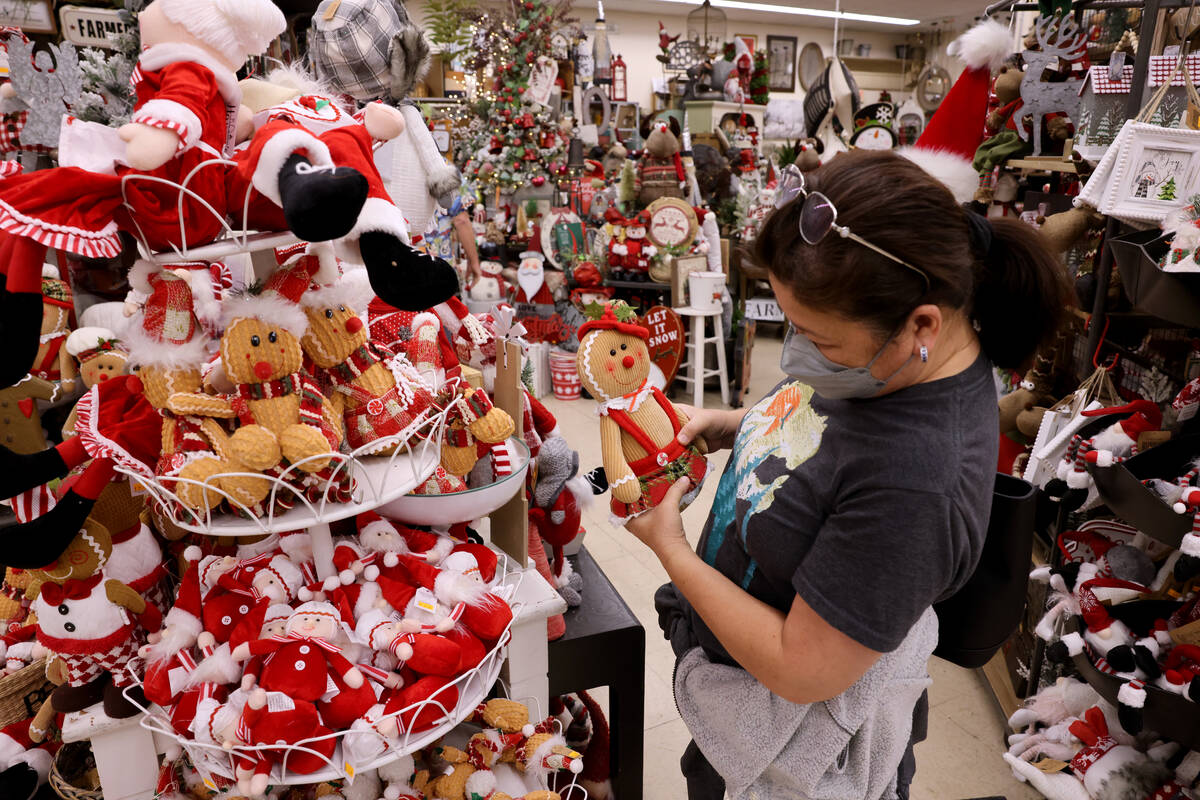 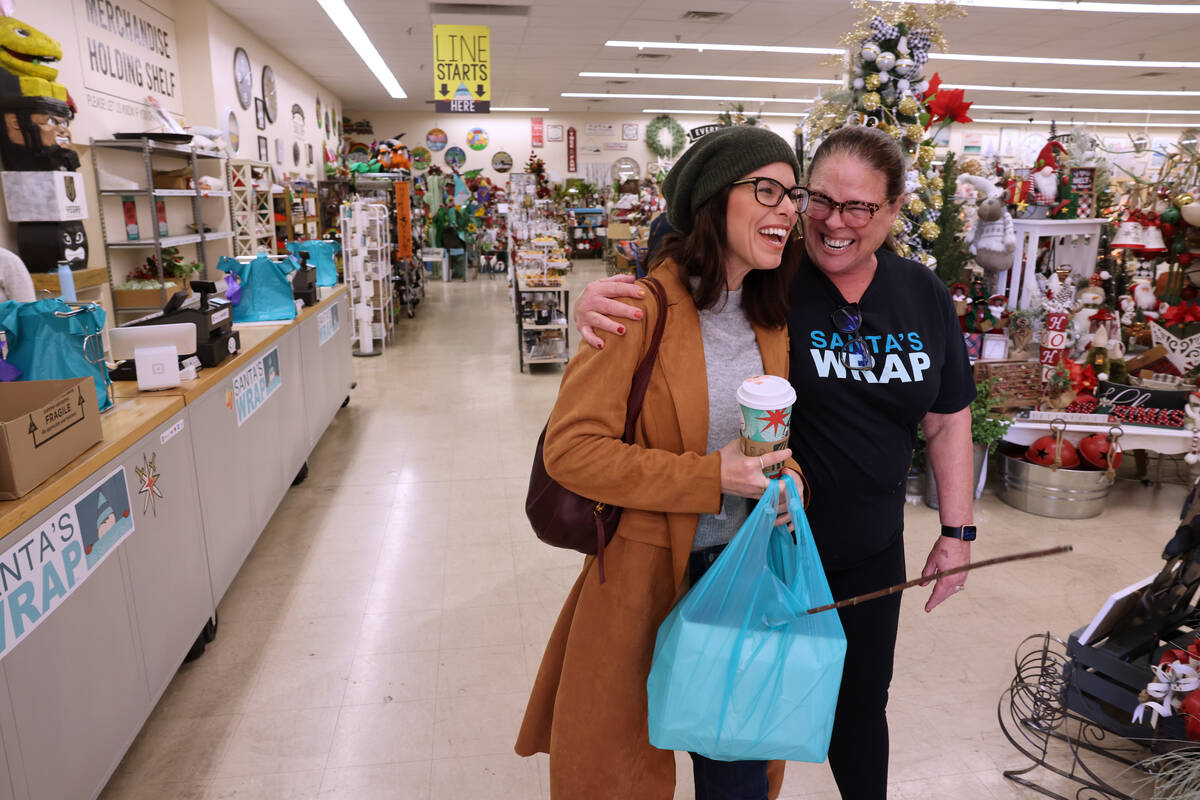 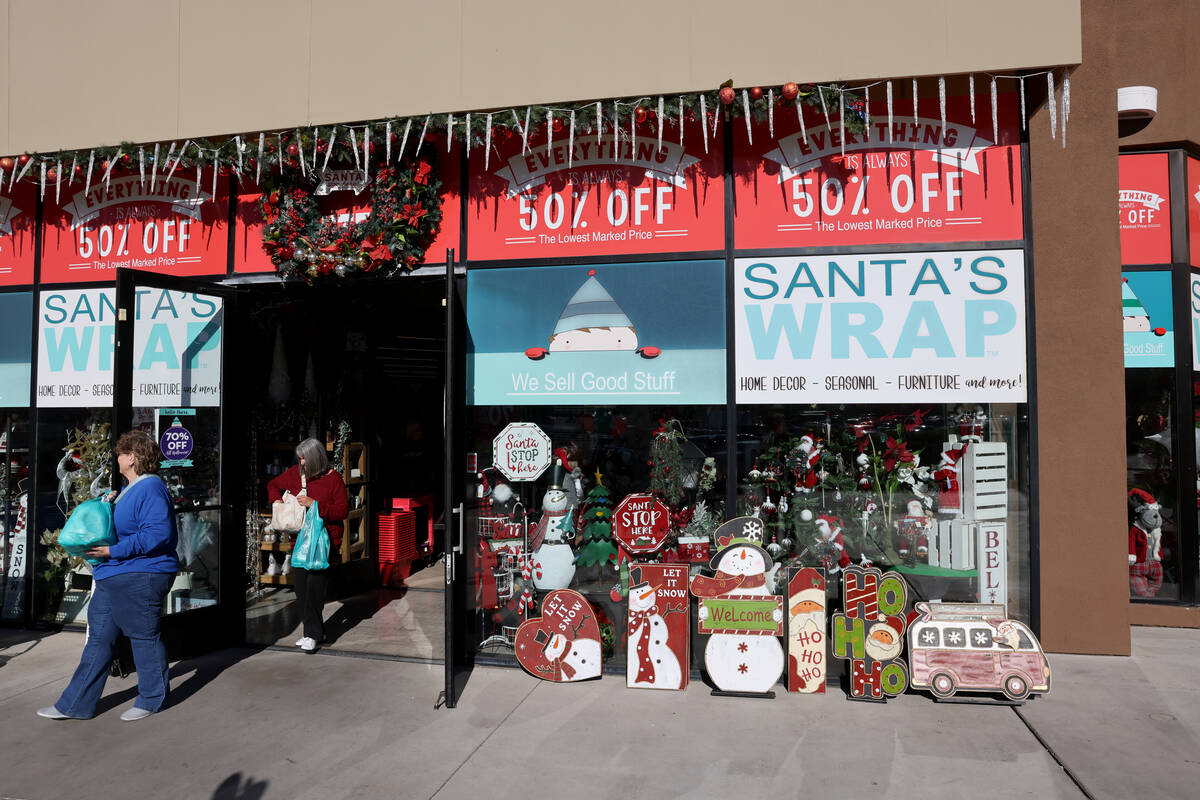 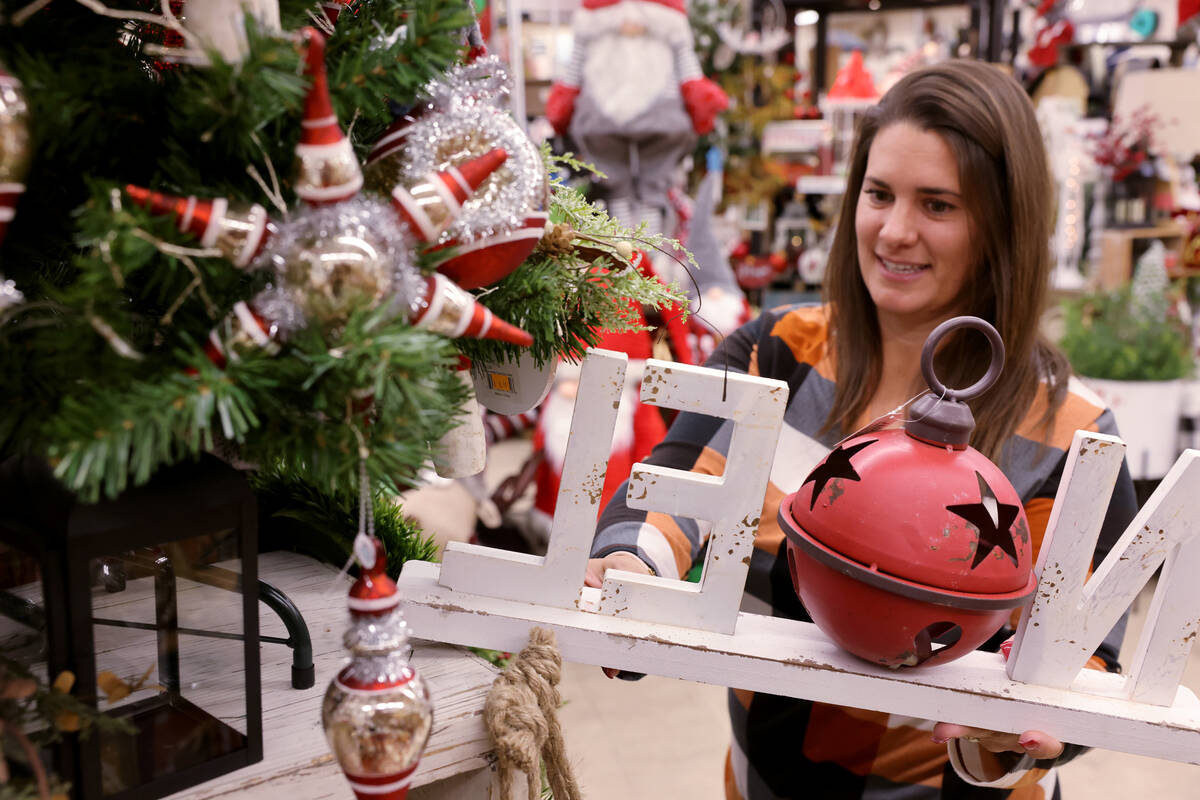 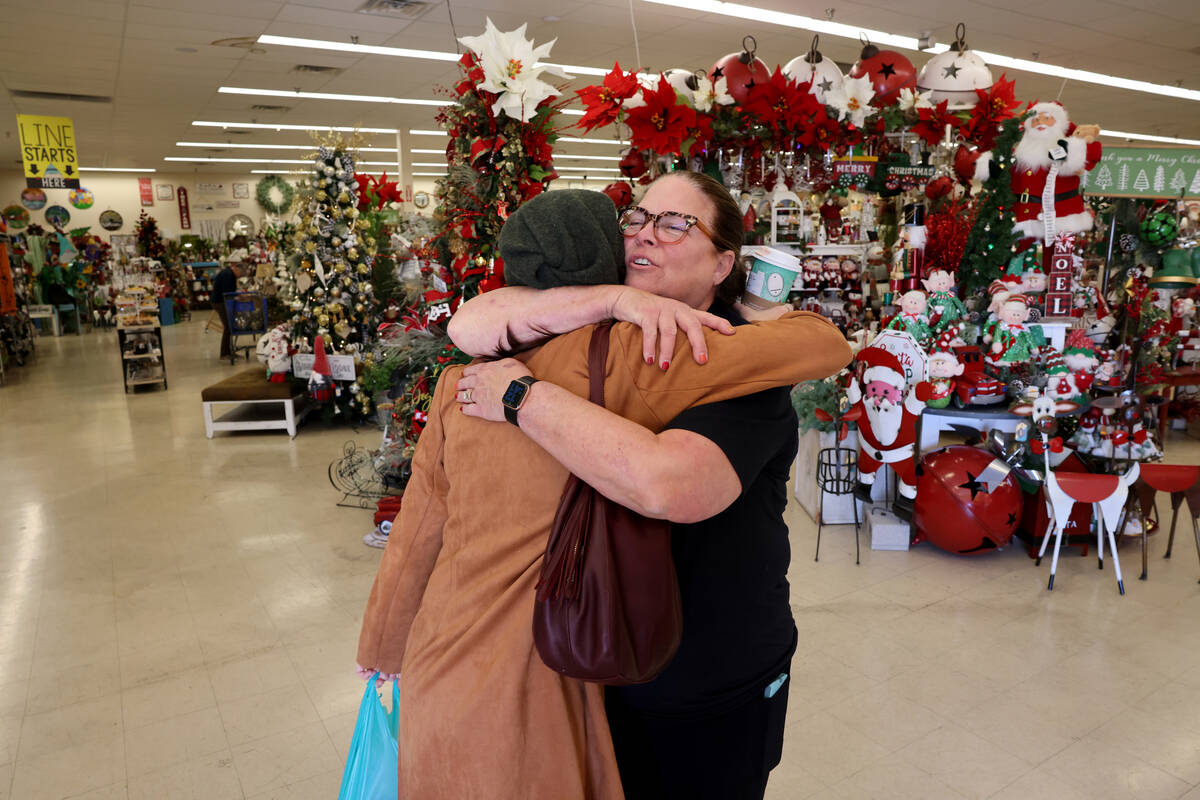 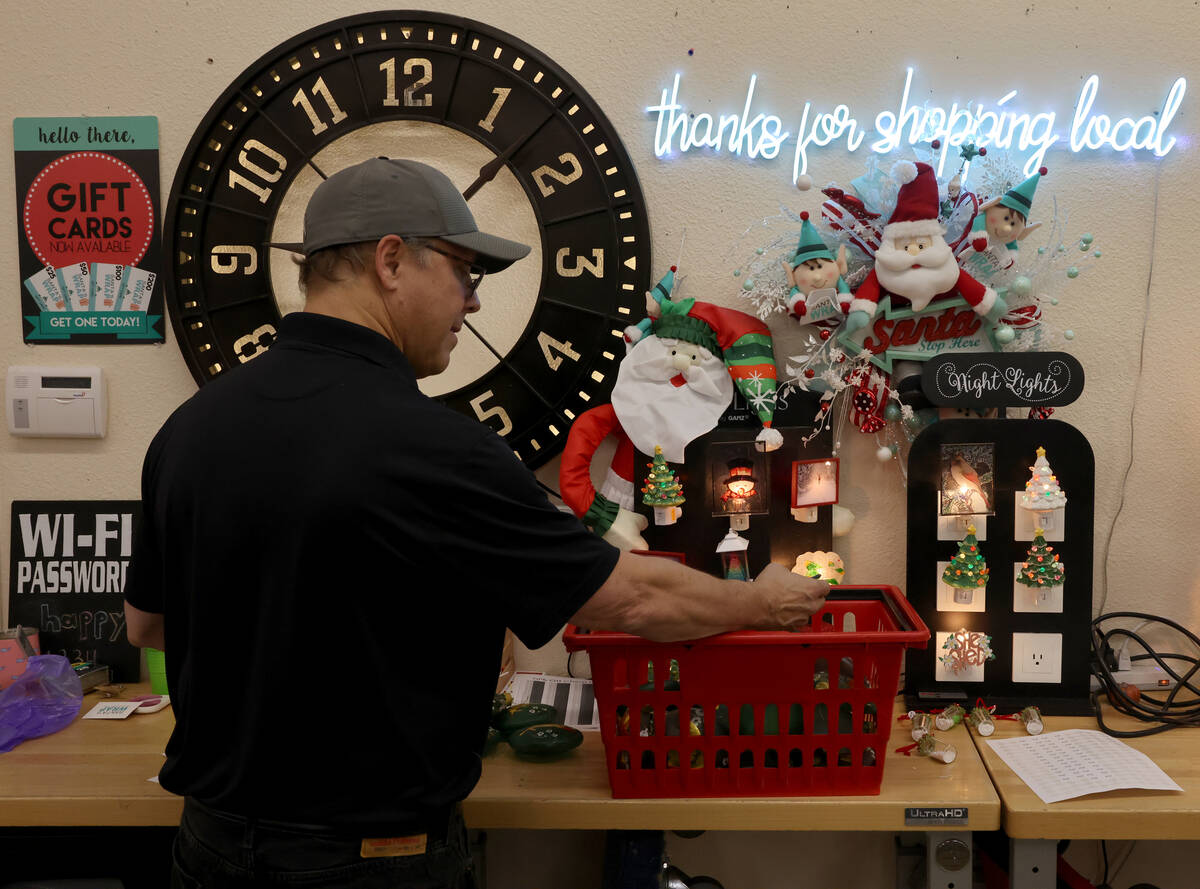 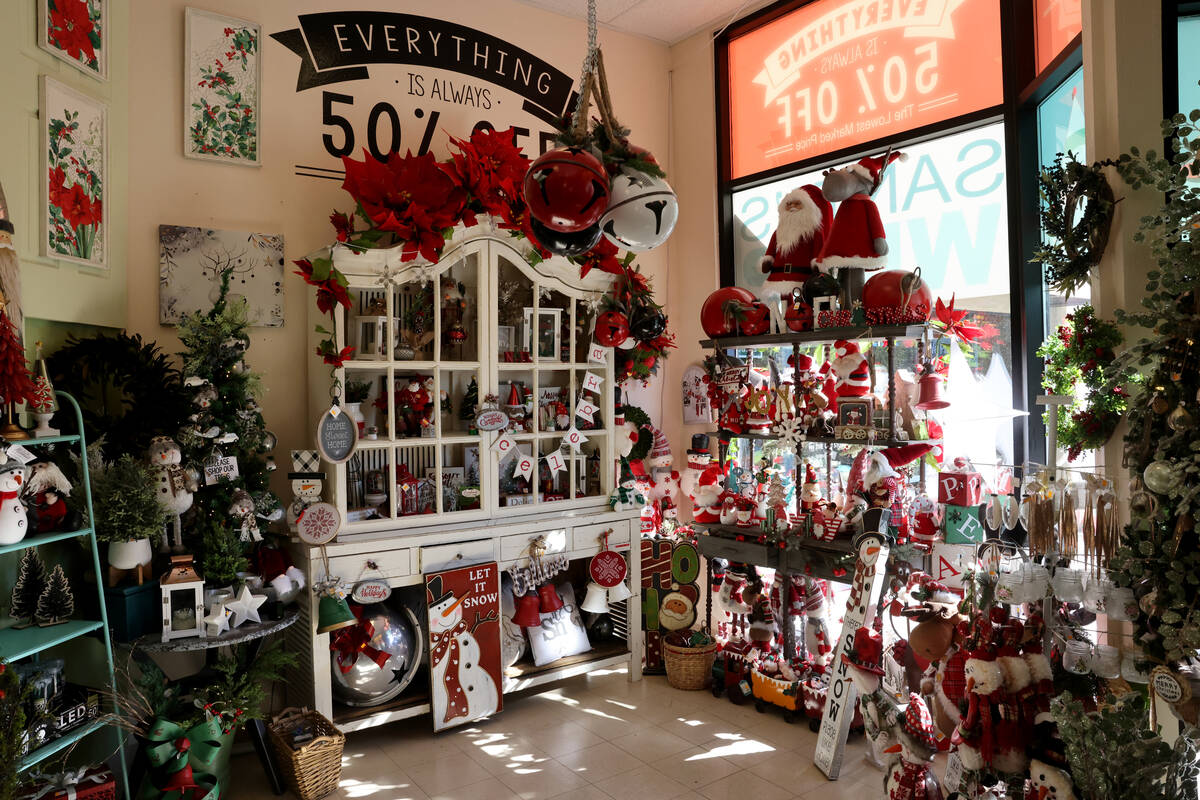 Santa’s Wrap transforms into a Christmas-themed store every June. While the seasonal home decor and gifts shop in Las Vegas starts its holiday push earlier than traditional retailers, it’s finding that this year it’s right on time — thanks to inflation.

Co-owner Beth Tom said her 18,000-square-foot store started its holiday promotions earlier, and it has placed more attention on promoting its Christmas products, just under 90 percent of the store’s products are dedicated to the holiday.

The holiday season and the sales that go with it are off to an early start this year. But as businesses navigate perplexing economic conditions that couple a strong labor market with high inflation, they’re still hoping for a successful season.

Holiday retail sales in Nevada are expected to grow by 8 percent this year, reaching a record $6.5 billion, according to the Retail Association of Nevada. The trade group noted the traditional holiday shopping season spans November and December.

“We expect spending to continue to be robust going into the holiday season,” Bryan Wachter, RAN’s senior vice president, said. “We do note with a little trepidation that folks are utilizing lines of credit and savings, during this holiday season.”

Nationally, holiday sales are also expected to be robust with sales growing between 6 percent and 8 percent year over year, totaling between $942.6 billion to $960.4 billion, according to the National Retail Federation.

“It’s the strength of the labor market that’s really fueling the spending. Even as we have inflation, the demand for labor remains strong,” Jack Kleinhenz, NRF chief economist, said in a media call this month. “When you look at the fact that consumers have available credit, and certainly job gains are generating more spending.”

But not everyone is buying into the robust holiday projections.

Andrew Woods, director of the Center for Business and Economic Research at UNLV, said the projected sales growth can be negated by overall inflation.

“I think those (NRF) numbers are from a headline standpoint and a little misleading … once you factor in inflation,” Woods said.

Inflation reached 7.7 percent in October from a year ago, down from a peak of 9.1 percent in June but still a level that hasn’t been seen in 40 years. At the same time, the Federal Reserve has raised its key short-term rate this year at its fastest pace since the early 1980s — to a range between 3.75 percent and 4 percent, the highest level in about 15 years.

Those hikes have increased borrowing costs for mortgages, auto loans and credit cards, among other loans. Fed officials intend the higher rates to slow borrowing and spending and cool inflation pressures.

Paige and Rye, a retailer focusing on locally-made products, kicked off the holiday season on Nov. 1, but owner Lauren Tieru still thinks that was too late.

“We put up Christmas trees, I think the day after Halloween,” Tieru said. “And I even think that was maybe a little bit later than some other stores.”

“What consumers have repeatedly asked for, and enjoy, is that ability to spread out the spending that they’re anticipating doing for the holiday season over multiple payment periods,” he said.

Santa’s Wrap said an early start is also good for business as it gives the retailer more time to sell its seasonal products — and more time means more sales that could help cover increasing supply and labor costs.

“Labor costs are much higher. Everything is much higher. There isn’t anything that went down this year,” she said. “Margins are much, much, much lower but you still have to have the product and make sure you fulfill the (demand).”

Tom said the store has focused on prominently featuring its sales such as 70 percent discounts on items that can fit into a gift basket.

Tieru said her challenge is convincing customers to spend a bit more to support the local artists and vendors sold at Paige and Rye. She said prices are slightly higher because many items like its skincare products are small-batch and locally-made. And offering deep-discounts is difficult for the small business, especially as vendors raise their wholesale prices to combat higher supply costs.

“I think people are like, ‘Oh, I can just order that cheaper somewhere else,’ ” Tieru said. “I definitely do see more of where we have to kind of convince people this is worth the price.”

Woods anticipates consumer spending to ease starting early next year because many are financing their purchases.

A report Tuesday from the Federal Reserve Bank of New York found more households are relying on credit cards to pay bills, with nationwide credit card balances jumping 15 percent in the July-September quarter from a year ago, the largest year-over-year increase in two decades.

“We’re seeing this more and more — consumers having a dip into their savings … in order to finance the same lifestyle or purchases they were having before,” Woods said. “At the same time come January, we’ve all got to pay those bills, and they’re going to be higher if your spending was higher.”

Founders Jeff and Zina Medeiros said they plan to offer a number of deals through Black Friday such as free shipping and 20 percent off toys as well as a promotion offering a 15 percent discount for consumers who subscribe to its newsletter.

And as small businesses in Southern Nevada push special deals to jump-start early consumer spending, most are still confident that this year’s holiday shopping season will be strong despite inflationary pressures and talks of a looming recession.

“It’s definitely our money-making months — November and December,” Tieru said. “This will be the time really to get the best sales goals of the year to make up for the slow months that will be coming up.”