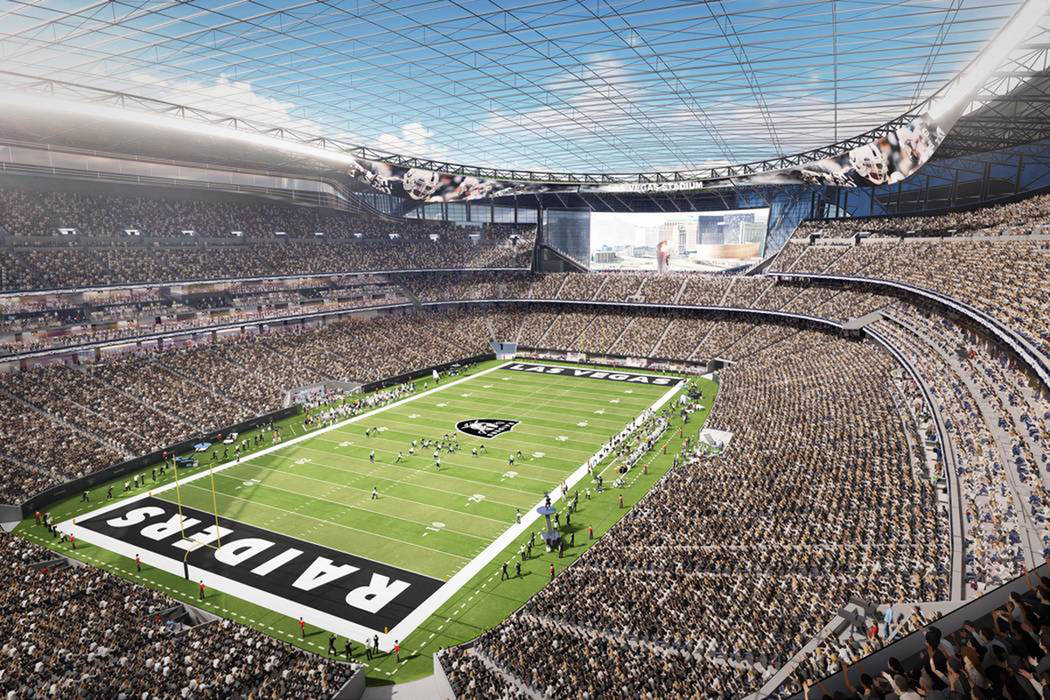 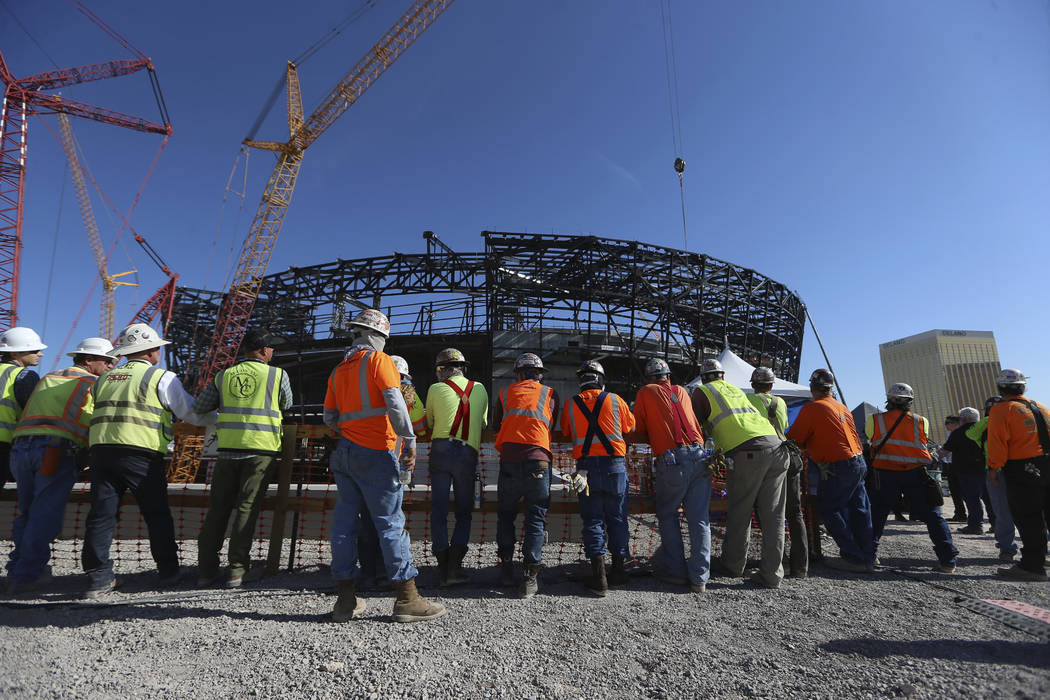 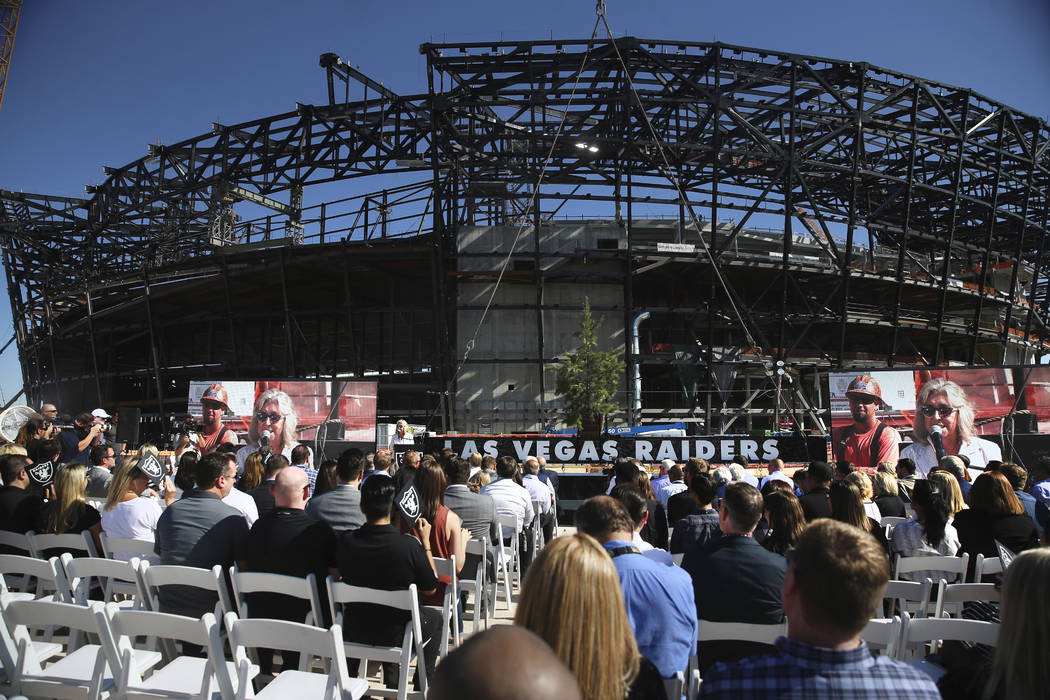 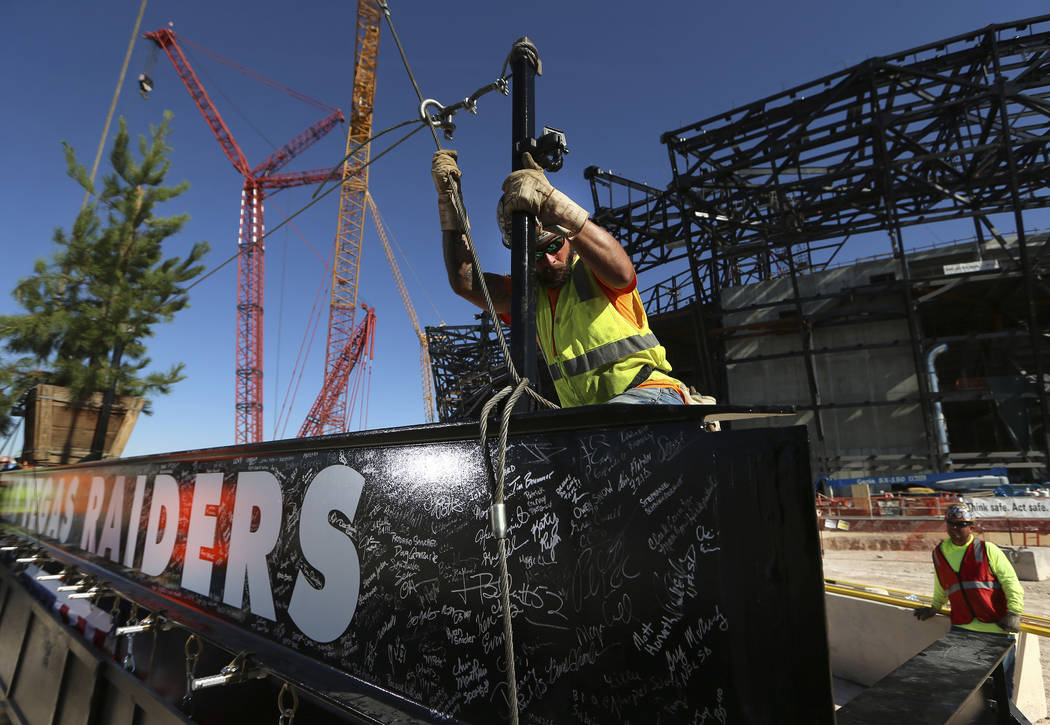 Or, as Raiders owner Mark Davis said, the project is at halftime.

In the playbook of tasks needed to meet the planned July 31, 2020, completion date there are a few more milestones to be met.

Here are some of the next big occurrences that will be cause for celebration even before the Raiders score their first touchdown in the stadium next year.

In the coming months, work on installing the roof above Allegiant Stadium represents the biggest task left on the to-do list.

Crews are prepping to install the up to 850-foot long cables that will support the translucent polymer roof.

“They’re laying out the cable netting that will go up in the next few months,” team president Marc Badain said. “That will be the next big change.”

Don Webb, chief operating officer of Las Vegas Stadium Co., has indicated the roof, which will rest atop a crosshatch pattern of cables stretched across the opening, would be built on the floor of the stadium and lifted into place by two cranes.

The cable net process will begin in September and is slated to wrap up by the end of October, Webb said. Due to the complexity of the installation, Webb has referred to the process as a 17-acre Swiss watch.

“The preciseness of the process leaves little room for error,” Webb said.

After the cable net is in place, the roof installation will begin. Crews will leave a portion of the roof open until March to allow for some interior work involving a crane to occur, Webb said.

Another milestone that’s typically celebrated during a stadium’s construction is the installation of the first seat in the 65,000-fan capacity stadium.

The first seat could be installed any day if it fit into the project’s schedule, Webb said, but it’s all about timing.

With work on the concrete steps where the seats will be installed not slated to wrap up until the end of November and a few other tasks that could be affected by seat installation still to go, the first seat likely will be installed sometime in January or February, Webb said.

The process usually involves team representatives and the fan who will own the seat that’s being installed.

The seat installation will last several months and be completed sometime in June, according to the latest project schedule.

One of the most anticipated features at Allegiant Stadium are the massive 80-by-215-foot lanai doors.

The doors located on the north end of the stadium open to a spectacular view of the Las Vegas Strip. Coupled with the translucent roof, the doors will give the look and feel of an outdoor venue, but will offer the ability to control the climate when necessary.

The area where the lanai doors are located will also feature the Al Davis memorial torch. If winds 25 mph or greater are forecast for a game day, the doors will remain closed. It takes about 10 minutes to close the stadium’s lanai doors.

The lanai doors do not come as an assembled component like other doors in the stadium.

“The installation process is a matter of constructing, rather than installing them,” Webb said.

The process to construct the lanai doors will be carried out as part of the exterior glazing system and is expected to be completed by the end of March.

The translucent black glass panels that will be installed around the exterior of Allegiant Stadium will give the stadium a black appearance from outside the stadium during the day, but the stadium lights will be visible come sundown.

Installation of the glass is expected to wrap up in March, when the stadium is set to be fully enclosed, Webb said.

Crews are in the process of constructing the 4-foot-deep tray that will move the 9,500-ton natural grass field in-and-out of the stadium between Raiders and UNLV football games.

Rolling on 13 rails through a 14-by-240 foot opening on the south end of the stadium, the process for bringing the turf in or out is an intricate one.

“There’s a lot of moving parts and detail work to go on the stadium’s floor,” Webb said.

The field tray will take about 90 minutes to fully move in and out of the stadium via 76 electric motors.

First tests on the tray are scheduled to occur near the end of May, Webb said.

Once all the plumbing in the stadium is complete the team will test out how the sewer system will handle a spike in use tied to a typical stadium-level event.

Dubbed the “big flush,” every toilet and urinal will be flushed at the same time as all the faucets in the stadium are turned on.

“We’re going to try and overload the system,” Webb said. “I’m serious. We’re going to play out what happens during a sold out NFL stadium.”