Outside of the Fremont Street Experience Viva Vision canopy, Allegiant Stadium's video screen will be the largest sign in the valley, approximately 27,600 square feet in area. (Las Vegas Review-Journal) 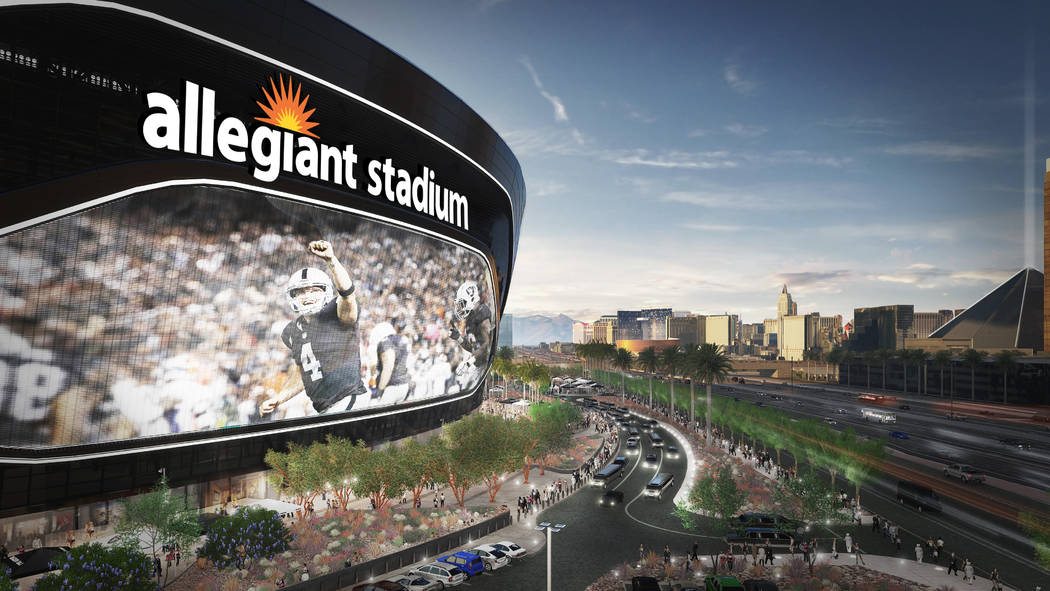 Plans submitted to Clark County, dated July 29, 2019, show a video screen is planned to be 80 feet tall by 345 feet long will be attached to the east-facing side of Allegiant Stadium. Courtesy: Las Vegas Raiders 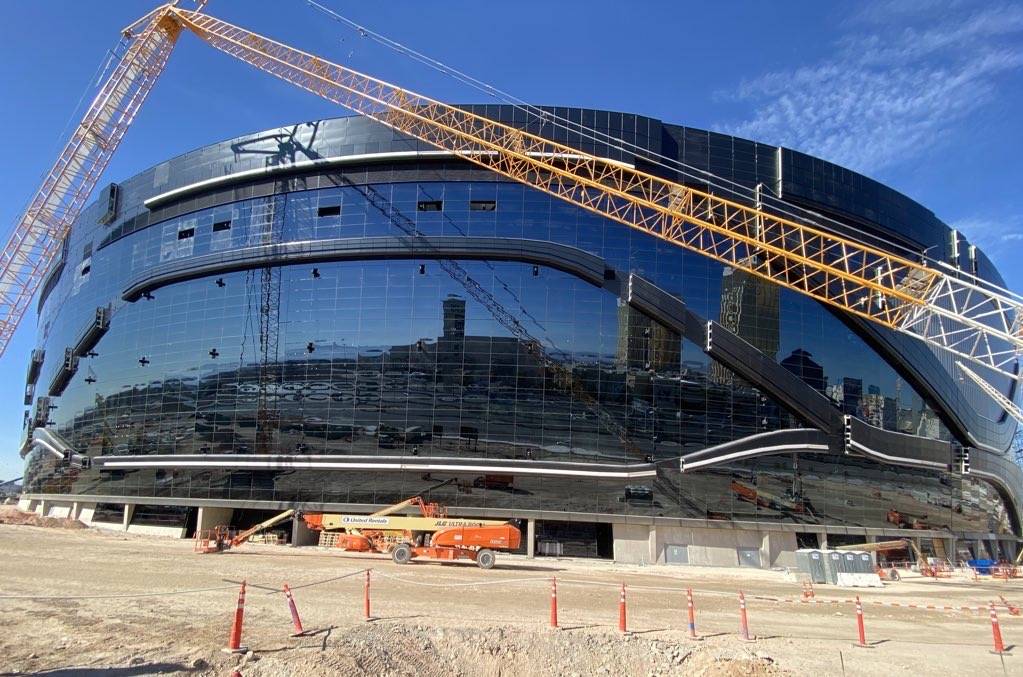 The space where a planned 80 feet tall by 345 feet long video screen will go on Allegiant Stadium is coming together on February 2, 2020. Mick Akers/Las Vegas Review-Journal

The video screen slated to be installed on the side of Allegiant Stadium facing Interstate 15 will be huge — 27,600 square feet in area — but it won’t be the largest in Las Vegas.

But as freestanding signs go, the Allegiant screen will eclipse all others in Clark County. Sign plans submitted to Clark County show the video board is planned to be 80 feet tall by 345 feet long and is set to be attached to the outside of the $2 billion, 65,000-seat Allegiant Stadium.

County Director of Planning Nancy Amundson confirmed the sign was part of the approved exterior sign package for the stadium.

Until the sign is installed, the largest video sign in Las Vegas is the one that sits above the Harmon Retail Corner on the northeast corner of Las Vegas Boulevard and Harmon Avenue that is 71 feet tall by 359 feet long, or 25,517 square feet in area.

Although Raiders officials have not gone into detail about the screen, Don Webb, Las Vegas Stadium Co. chief operating officer, told the Las Vegas Review-Journal during a tour of Allegiant Stadium in November that it would be made of mediamesh and would not impede the view of those looking out from inside the stadium.

The plans identify the video screen used at the NBA franchise Miami Heat’s American Airlines Arena as an example of what will be used in Las Vegas.

Miami’s screen also is made of mediamesh, which allows structures to display dynamic video boards while allowing those inside to see out the windows.

The sign plan was approved in November by the Clark County Commission after Federal Aviation Administration review, with no issues expected to be posed to motorists on I-15 or air traffic in and out of McCarran International Airport.

In all, the stadium will feature 650 signs of all sizes, with 475 slated to go outside of the stadium.

The stadium plans additionally reveal a white accent light ribbon being installed around the entirety of Allegiant Stadium will stretch 7,865 feet in total. The ribbon will light up the dark building at night giving it a distinct look.

Other notable video signs in the valley include the mediamesh screen above the Palms, which stands 275 feet tall and is 82 feet wide, and the LED video screen on the southwest corner of Las Vegas Boulevard and Spring Mountain Road that is 45 feet tall and more than 175 feet long. Both of those signs were installed last year.

Allegiant Stadium’s sign won’t be the largest in Las Vegas for long, as the $4.3 billion Resorts World project includes a planned LED screen on the west tower that will encompass 100,000 square feet in area when it opens in 2021.