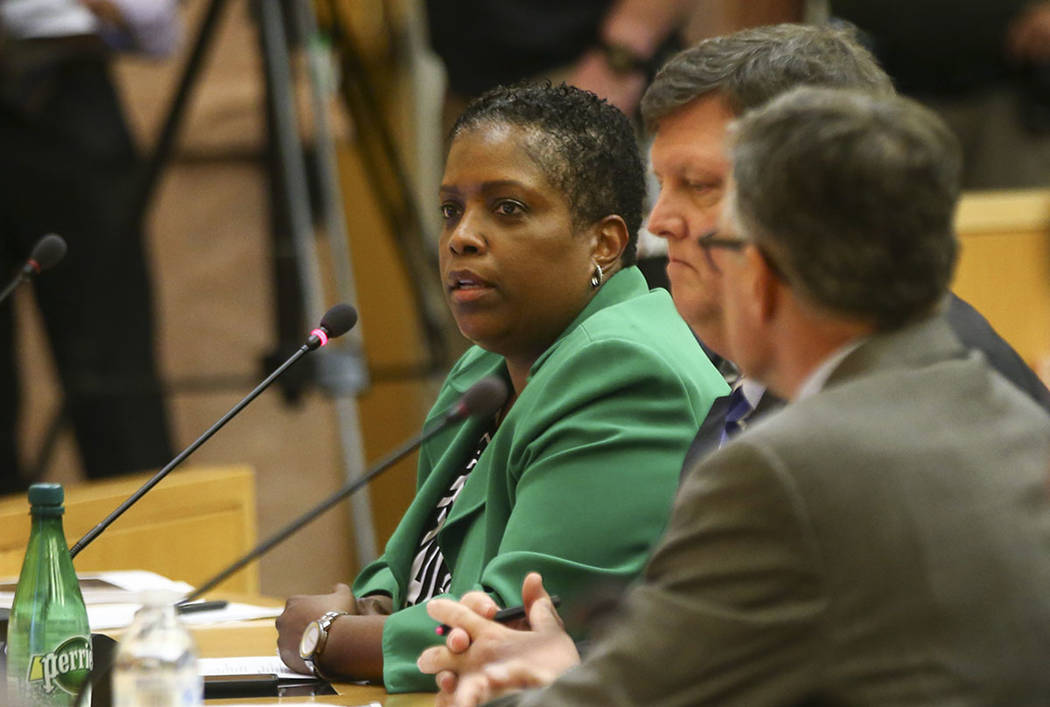 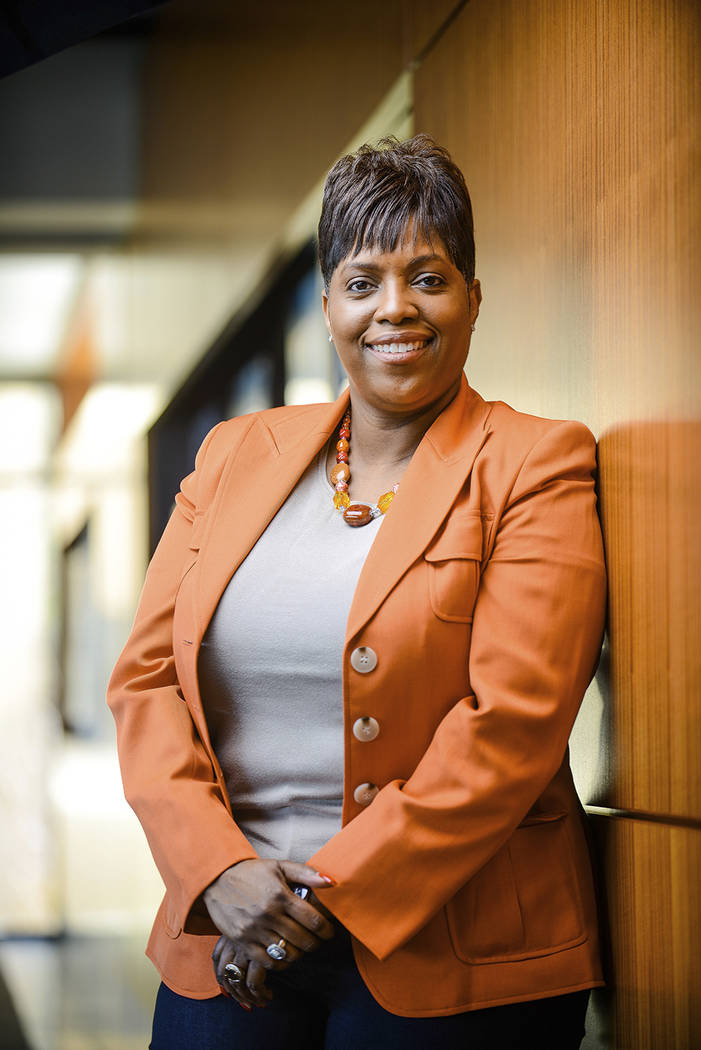 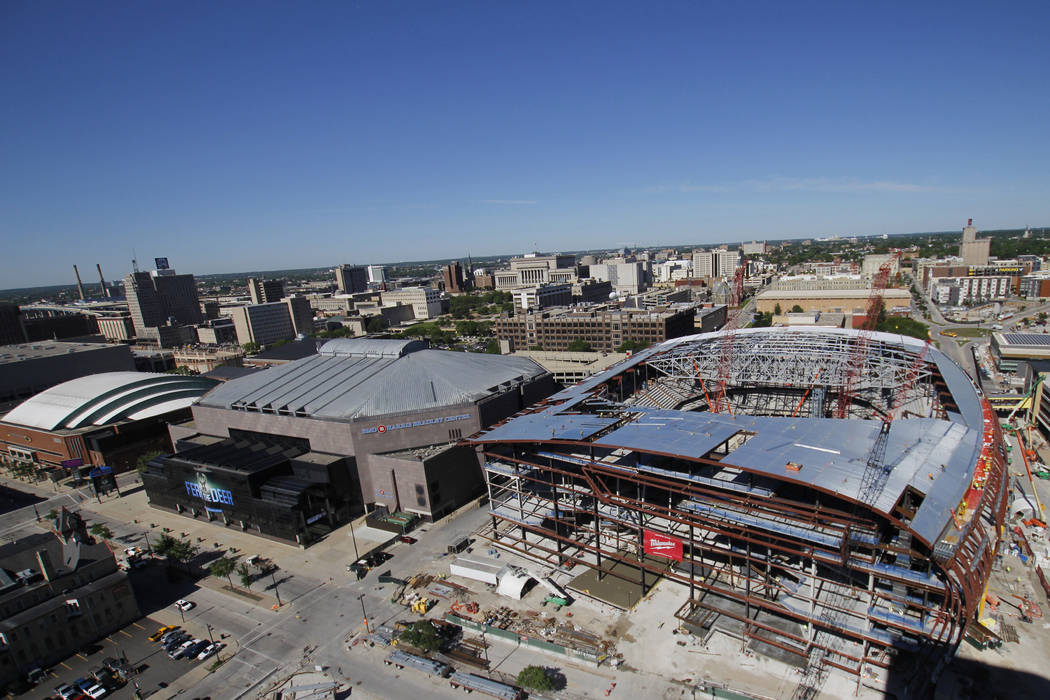 In this photo taken June 6, 2017, construction continues on the Milwaukee Bucks new NBA basketball arena in downtown Milwaukee. Minnesota-based Mortenson Construction employees have been stretching before they work for about 20 years. The company is managing the $524 million project, which started last summer and is expected to wrap up next fall. (AP Photo/Carrie Antlfinger)

GOLDEN VALLEY, Minn. — When government leaders view a public works project as an economic development driver for a community, as was the case for the Las Vegas stadium project, critics are bound to surface.

In Las Vegas, the issue was amplified because of the amount of the public commitment — $750 million, the largest amount of public money ever dedicated to a public-private partnership for a sports facility.

The questions were inevitable. Why should the public give so much money to a project controlled by billionaires? Wouldn’t it be better to just use all that money to address a need, such as education or health care? What’s in it for the citizens of Southern Nevada?

That’s where Lynn Littlejohn comes in.

The 21-year Mortenson Construction employee is focused on inclusion programs that are a part of the construction of the planned $1.9 billion stadium.

“These large, high-profile projects are sometimes controversial and definitely have a light shining on them, so there needs to be a focus on economic development, and giving back to the community is important,” said Littlejohn, who has made several appearances before the Las Vegas Stadium Authority on behalf of the Oakland Raiders and Mortenson.

Senate Bill 1 outlined the financing of the stadium and the public’s $750 million contribution through a 0.88 percentage-point increase in a sales tax on motel and hotel rooms to secure tax-exempt bonds being used to build the 65,000-seat stadium. It also required the Raiders to develop a community benefits plan.

After months of work and a series of meetings among Littlejohn, Raiders executives, Stadium Authority representatives and Southern Nevada’s minority contracting community, the community benefits plan was delivered in December. It didn’t require the Stadium Authority’s approval, but members reviewed it because it it will appoint the chair of a seven-member oversight committee to make sure the plan is implemented.

The community benefits plan establishes goals for the hiring of minority subcontractors, laborers and game-day employees, as well as suppliers and provisioners.

Labor experts say they expect those goals will be surpassed.

Littlejohn said municipalities that have heard presentations often meet them initially with skepticism. She said when Mortenson built the FedEx Forum, the home of the Memphis Grizzlies, city officials were the early skeptics.

Once the plan was initiated, city officials came around and became the biggest advocates for it.

While voices opposing the use of public funds for the stadium have been loud, Littlejohn said her perception has been that Las Vegas and Nevada have been extremely collegial, despite unique challenges here because Senate Bill 1 was well-crafted and clearly addressed the need for community benefits. The biggest challenge: There was no database of qualified minority contractors in place when Mortenson arrived.

One of the first things the contractor did was work with McCarthy Builders of Henderson to build their own database. That started a year ago with a massive public meeting at Green Valley Ranch Resort, where Littlejohn encouraged contractors to apply and be qualified as a small-business minority contractor.

The Stadium Authority’s website steered potential contractors to an application process. Mortenson has already begun working with qualified vendors and laborers with an eye toward surpassing the established percentage goals so that the people needing the work benefit most from the $750 million public investment.

Of course, not everybody is happy.

On the day the Raiders presented the community benefits plan to the Stadium Authority in December, Gene Collins, a representative of the Concerned Citizens of Historic West and North Las Vegas, presented an alternative plan that added another qualifying element — that at least 20 percent of the workforce for construction and post-construction employment come from one of three ZIP codes: 89106, 89030 and 89032, the areas representing Southern Nevada’s predominantly black communities.

The proposal also sought $2 million to establish an apprenticeship and training program specifically for African-American laborers and $100 million to develop a business incubator in the targeted ZIP codes.

Littlejohn said part of her job involves diplomacy with established community groups in a bid to work together toward a common goal.