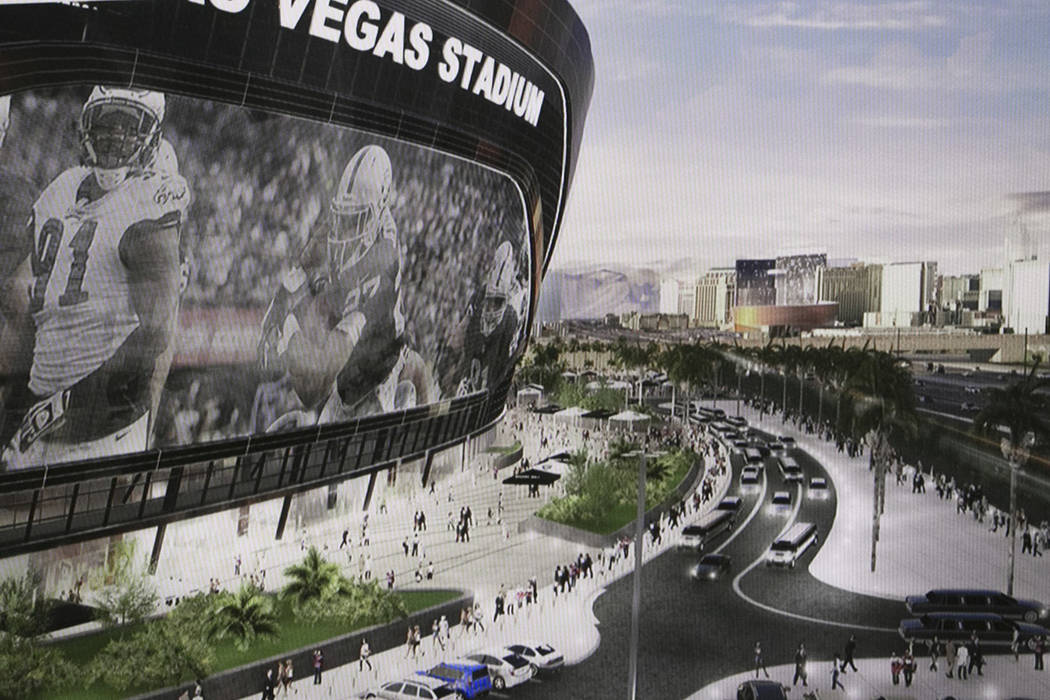 Webb did not provide details but said the parking and transportation plan will be completed next month and then released to the public.

“We’ve been actively acquiring real estate near the stadium, which we intend to develop and devote to parking,” he said. “One such current acquisition will more than double the parking that we currently control.”

The number Webb alluded to doubling is tied to the 2,725 on-site spots at the stadium site. An additional 11,925 spaces were identified last year through four satellite parking lots, bringing the total number of planned spots to 14,650 spaces, 1,600 short of the 16,250 Clark County requires for the project.

Doubling the on-site number would bring the project into compliance with the county’s requirement.

Raiders President Marc Badain said the team is under a nondisclosure agreement on that space and could not yet provide details.

Aside from leasing property for parking, stadium officials are seeking to set up a parking cooperative with adjacent businesses, Webb said. It would be managed by the stadium company.

“By (using) neighboring businesses who want to participate, our goal is that it has a uniform look and feel for marketing, pricing and offer security and all of that so it becomes a seamless experience for the Raiders fan or the concertgoer,” he said.

Stadium authority Chairman Steve Hill said he was pleased the Raiders are looking to include the nearby businesses in the plan, as there had been worries that area participation might be tough to come by early on.

“It’s been a concern for everybody, the Raiders included,” Hill said. “Having a coordinated effort for the available parking in the neighborhood is an innovative way to think about doing that.”

With up to 25,000 fans expected to walk to the stadium from Las Vegas Boulevard across Hacienda Avenue — which will become a pedestrian bridge for event days — officials are working with Clark County and MGM Resorts to create an enhanced experience along the stretch that runs between the Luxor and Mandalay Bay properties, Webb said.

“MGM has some very creative ideas on how to help us activate that,” he said. “Our goal is to not just provide safe means for people to walk over to the stadium from the Strip … but we’ll want that to be really a first-rate experience for them as well.”

Here’s a drone video of the @LasVegasStadium that was just played during the stadium authority meeting. #vegas #raiders #stadium pic.twitter.com/bt4Gx2cgSP

For those who want to arrive to the stadium in something other than their personal vehicle, the Regional Transportation Commission of Southern Nevada has been working with the Raiders on different ways they could transport people into the stadium area.

With an estimated 40 percent of stadium visitors expected to be from outside of Las Vegas, RTC CEO Tina Quigley said the transportation commission has several possible options to help move those people to and from the stadium.

One is enhancing bus service capacity already operating in the stadium’s vicinity, increasing route times during event days in the corridor.

The RTC also will look to run an express bus service similar to one serving Golden Knights games at T-Mobile Arena. Under that service, park-and-ride areas designated around the valley allow fans to park their cars and hop on buses for rides to and from the stadium for a set fee.

Technology also could come into play, including the current ride-hailing pilot program, Trip to Strip, which the RTC kicked off earlier this month. Via smartphone, riders can hail a ride on Ford Sprinter vans that fit up to 11 people and travel between set destinations.

“A lot of people will be looking for ways to be transported to the stadium,” Quigley said. “We are committed to helping out.”

Looking ahead a few years after the stadium is open, a recently approved underground people mover system, headed by the Elon Musk-founded Boring Co. and slated to be used at the Las Vegas Convention Center, also could play a role in event transportation, Hill said.

“We have an agreement with them (Boring Co.) that as long as this works, that we’ll work with the destination to expand into the destination,” said Hill, who is also chairman of the Las Vegas Convention and Visitors Authority.

That, he said, has the ability to activate all of the parking lots along a route from the convention center down Las Vegas Boulevard.

“I’m sure it’s 100,000 spots or so and makes them really an extension of each of the properties on the Strip. Any venue then has access to quite a bit of parking,” Hill said. “Like the concept of shared ridership, you get the same concept of shared parking because of a system like that.”

LIVECAM: Monitor the progress of Las Vegas Stadium in this view looking south toward the construction site.
MOST READ: Raiders
1
Brace for heavy traffic this weekend with big events near resort corridor

3
Raiders expected to get key defender back Sunday