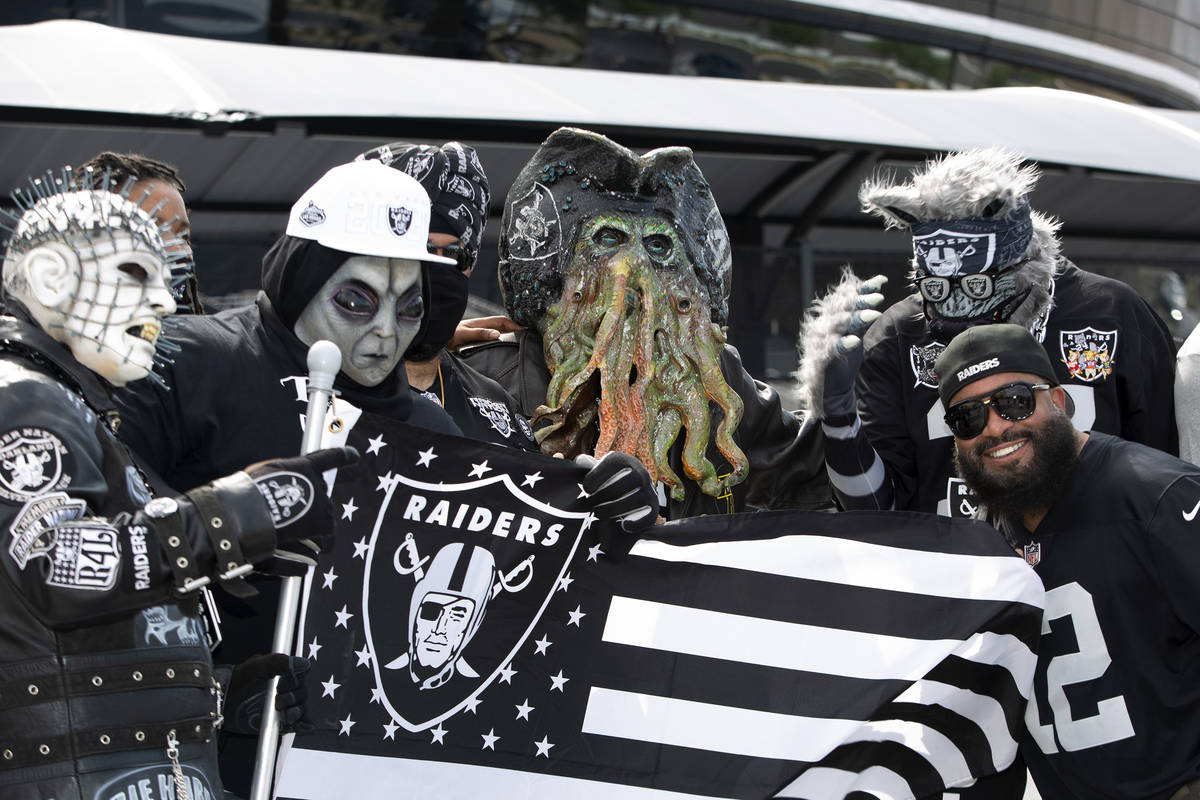 Patrick Beckett of New Jersey poses for a photo with Raiders fans in costumes as fans congregate before the first home game of the season outside the newly built Allegiant Stadium on Monday, Sept. 21, 2020, in Las Vegas. (Ellen Schmidt/Las Vegas Review-Journal) @ellenkschmidttt 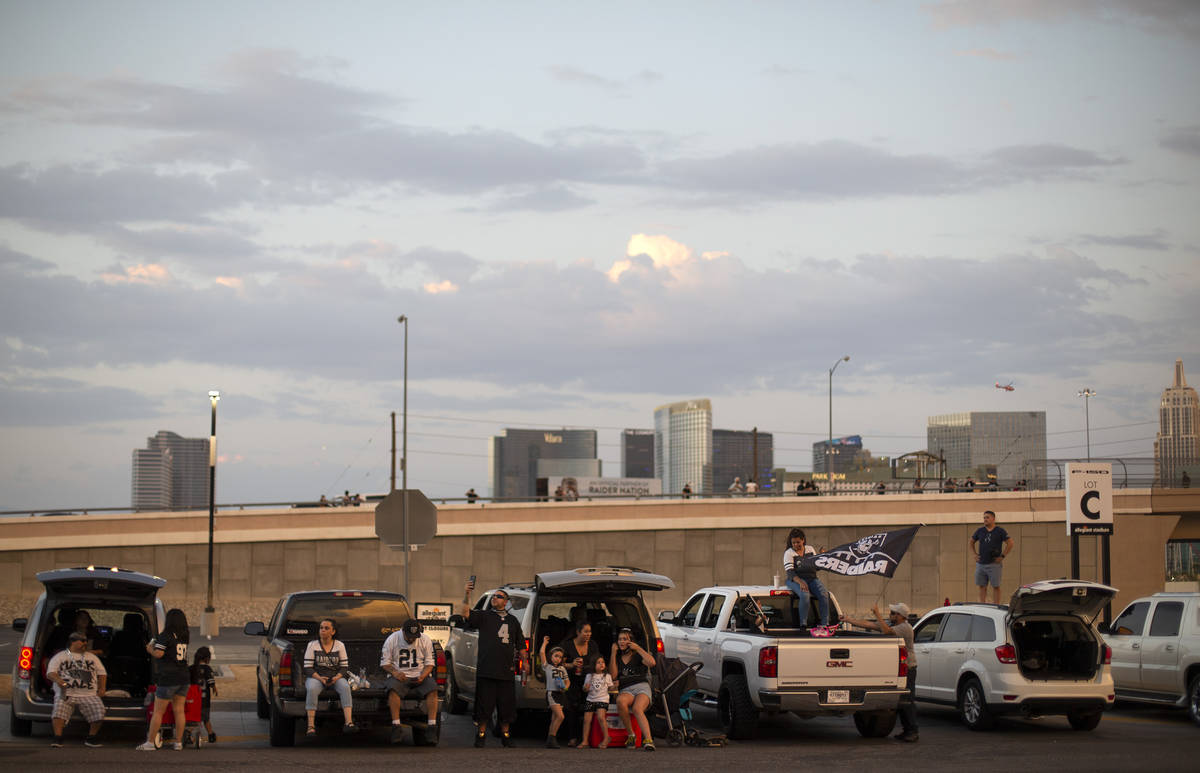 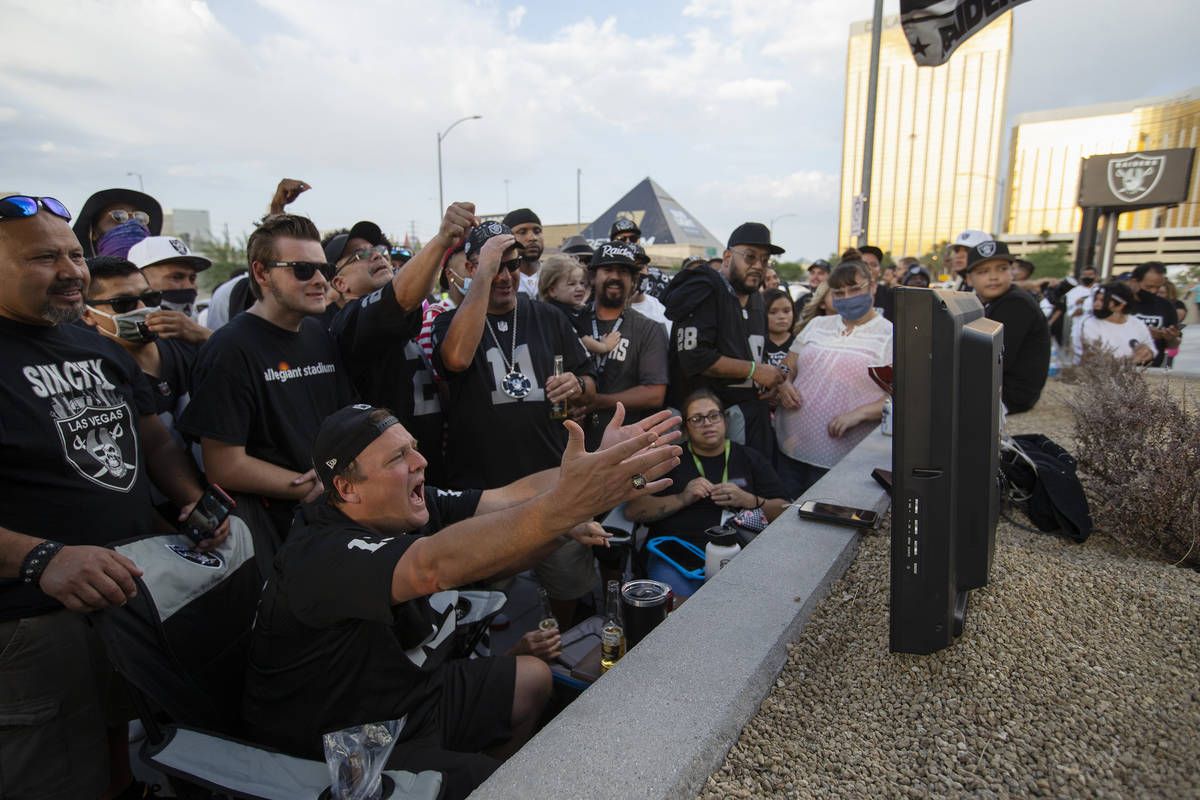 Kenna James, left, and a group that gathered around his TV react to a call during the first home Raiders game outside Allegiant Stadium on Monday, Sept. 21, 2020, in Las Vegas. (Ellen Schmidt/Las Vegas Review-Journal) @ellenkschmidttt

Fans aren’t allowed inside Allegiant Stadium for games, but starting Sunday, some will be able to watch outside.

The Raiders sent an email to season ticket holders late Tuesday advertising the Tailgate Zone at Allegiant Stadium, where fans in vehicles with five or fewer occupants can park in a stadium lot and watch the team’s game Sunday versus the New England Patriots.

Fans will watch the action on a large LED screen and a stage will be constructed where Raiders special appearances and performances are planned.

Each package includes two parking spaces, one for a group’s vehicle and one to allow for proper social distancing to occur, with vehicles parked in an alternating pattern.

The VIP package guarantees a front row parking spot in front of the screen.

Fans will be asked to adhere to COVID-19 regulations, which include temperature checks, filling out a health questionnaire upon entering the tailgate zone area and enforced social distancing.

Tailgating is not allowed in other areas within or around the stadium, the email stated.

Hundreds of fans held their own tailgate party at Allegiant Stadium for the Raiders’ win against the New Orleans Saints in their first game in Las Vegas on Monday. Crowds mainly congregated around the north end of the stadium, parking on the sides and middle of streets and just about anywhere they could find with parking lots closed to fans.