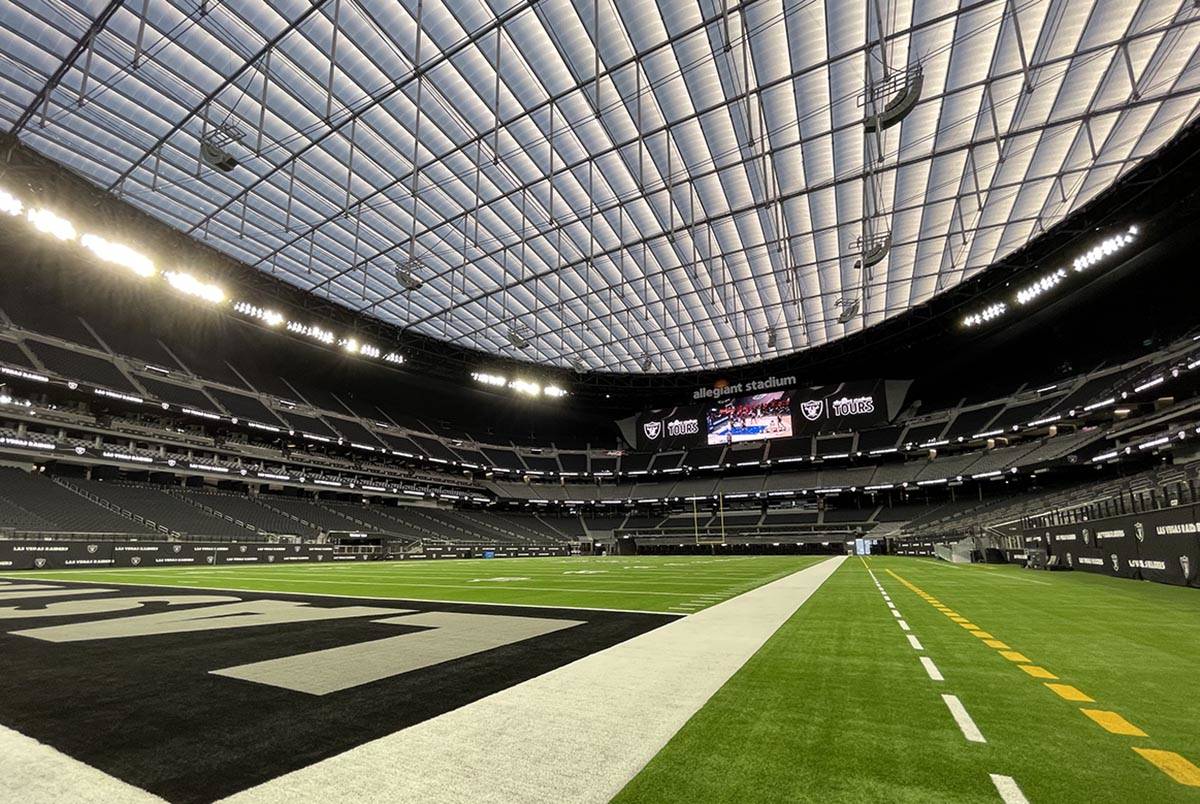 Mark Davis' suite will soon receive a $688,000 renovation that is slated to be complete ahead of the start 2021 NFL season kicks off at Allegiant Stadium, seen here on May 6, 2021. (Mick Akers/Las Vegas Review-Journal.)

Despite being listed as a renovation project on Clark County documents, Davis said it’s more of carrying out the original plans he had for the space ahead of the stadium’s substantial completion last July.

“The design of that suite was happening during the finishing stages of the stadium, when we were getting the certificate of occupancy,” Davis told the Review-Journal Monday. “They did a rough design of it so they could start doing tours and things of that nature, but at some point in time we were going to do the actual real design work in it for me.”

Davis said a key element for his suite is adding glass between it and the seating outside of it, to be able to have privacy in the space when needed.

“In other words you could be sitting inside the suite and not hear what’s going on inside the stadium,” Davis said. “Some suites (in other stadiums) have glass around them, but none of the suites in our stadium do. But I wanted to have that feature, but when they designed it, they didn’t quite get it correctly lined up. So, that is one of the features that we have to redo.”

The rest of the work entails adding a finishing touch where a temporary solution was put into place.

“If you did go through it on the tour you’d probably notice that it wasn’t fully finished,” Davis said. “The fact that I didn’t use it last year made it that it wasn’t a necessity to go ahead and do it then. It won’t be anything extravagant or anything, but it takes money to take stuff down and then put it back up.”

Davis didn’t have an exact timeline for the planned work on the suite, but said it should be complete ahead of the start of the 2021 NFL season. The Raiders will foot the bill.

Davis has yet to attend an event in the space, as he vowed to skip Raiders’ home games at the $2 billion stadium last year when fans weren’t allowed in the building due to COVID-19 protocols. The first event with a large crowd is finally occurring July 3 with EDM star Illenium’s show.

Although he’s been in his suite outside of games, mainly for meetings regarding the final design, Davis said the general public has probably gotten more use out of it than he has.

“I’ve sat in there a couple of times when we were talking about the design of it,” Davis said. “I think the fans have spent more time in there than I have.”