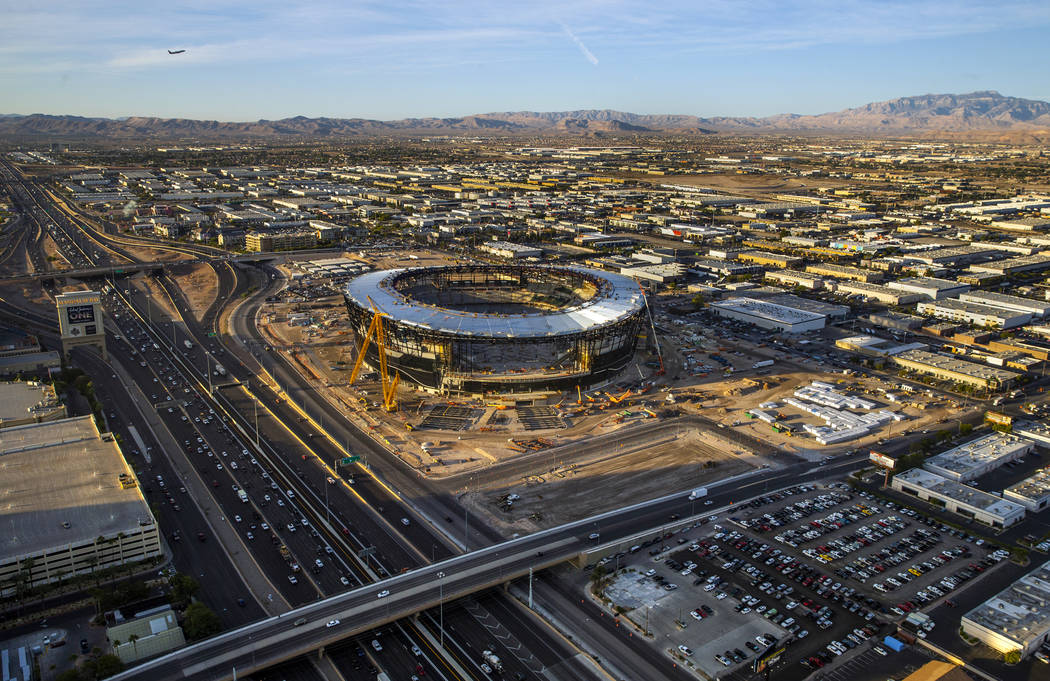 The massive $2 billion, 65,000 fan capacity stadium rising up just west of the Las Vegas Strip won’t be the only noticeable change in the long-standing industrial area off of Russell Road and Interstate 15.

Clark County officials are in the early stages of figuring out how the area around the future home of the Raiders and UNLV football will change as the largest event facility in the state heads toward the finish line.

The stadium district is defined as a 1.23 square mile area around Allegiant Stadium, with the borders being Tropicana Avenue to the north, the railroad tracks to the west and south and I-15 to the east.

Through initial meetings of a tactical advisory commission made up of area stakeholders, officials and residents, they have developed three possible scenarios for the district that look at land use, transportation options and infrastructure they would like to see added within the area.

County Commissioner Michael Naft said the scenarios are not a definite plan of action, just a starting point for conversation.

“The stadium is so uniquely positioned, literally right across the street from the world’s most premiere entertainment district so you have to consider that when we talk about what the needs are in the immediate corridors nearby,” Naft said. “No doubt there will be dramatic changes to the neighborhood, but you want to do it in a way that it’s not just displacing the businesses that are there.”

No matter what is decided for the area, Naft wants to ensure the county commission caters to the local experience in the area, as the stadium will be the crown jewel of the valley once it’s completed.

“We’re expecting up to 26,000 pedestrians coming to the game from the Strip across Hacienda Avenue, so what’s the likely path a local might take?” Naft questioned. “I see them more so coming from the west potentially and that’s where I see some opportunity for sort of a local entertainment district over there. So maybe some more affordable options for both before, during and after the games.”

Here’s a look at the three scenarios:

Dubbed the industry and events district, this scenario keeps the industrial land use in the area with parking available through a parking garage and with plans for food trucks and pop-up restaurants to bolster the street life around the stadium.

No housing options immediately adjacent to the stadium are included in scenario 1, but some condos and apartments would be located within a mile of the stadium.

Transportation within the district would be carried out via a year-round transit service.

Stakeholders in the area liked that the scenario kept the land use primarily industrial, keeping distributors and suppliers there.

The stakeholders were concerned with the entertainment aspect, saying that should be concentrated along Hacienda Avenue, due to the pedestrian bridge and likelihood of concentrated foot traffic in the area, citing safety concerns.

This scenario includes a mixed use industrial district that would reuse and redevelop existing buildings and warehouses in the area. Hotels, bars, and restaurants would be included throughout the district.

Added green space and walking paths throughout the district would be included, as would increased mobility options such as transit, micro-transit, ride hailing options, scooters, and bikes.

“What’s important for the stadium is that there is no one silver bullet,” Naft said. “You’ll also see the RTC (Regional Transportation Commission of Southern Nevada) playing a role with shuttles similar to what they’ve done for Golden Knights games. Then you’ve got to remember this is one of the first sites of its kind being built post rideshare. I have confidence the stadium will develop that in a way that it’s really accommodating for rideshares, (which) for me, I think is a very viable way to get in and out of events.”

Having activities for fans in the vicinity of the stadium also is important as some fans may decide to stick around and wait for traffic congestion to die down before heading home, Naft said.

Stakeholders liked the mixed-use opportunities, entertainment options that could bring in and keep people in the district and the additional businesses that could be attracted to the area.

Transportation-wise, stakeholders liked that the district would be a walkable, pedestrian-friendly area, with safe transit and micro-transit options. They weren’t keen on the general lack of parking and the inclusion of electric scooters, as they noted those “are left everywhere by riders.”

The final scenario is described as a complete redevelopment of the district, with new buildings and uses.

The district would also include community pocket parks and gathering spaces. Upgraded pedestrian infrastructure would help vehicles and pedestrians share the road safely, with some roads being pedestrian-only on game days.

“Making pedestrians as comfortable as possible, whether it is coming from the Strip or from other nearby parking lots,” Naft said.

Stakeholders liked the mixed-use opportunities, development of a diverse economy with the goal of creating a self-sustaining community included in scenario 3.

Despite that, county officials have not yet had conversations about what is and isn’t appropriate, Naft said.

Transportation aspects that stakeholders liked were the walkability and pedestrian-friendliness of the area and the transit and micro-transit options.

The dislikes included the freeway and the railroad, which were described as barriers that prevent additional access and mobility.

Whatever decision is made for the how the stadium district will be developed, work won’t start anytime soon. There’s still several series of meetings to go through, then the planning and construction, Naft said.

“I think it’s important that we’re methodical about how this area develops,” he said. “We have a tremendous asset in the stadium, I think it would be a shame to rush to any sort of conclusion. It’s better to see how things play out.”