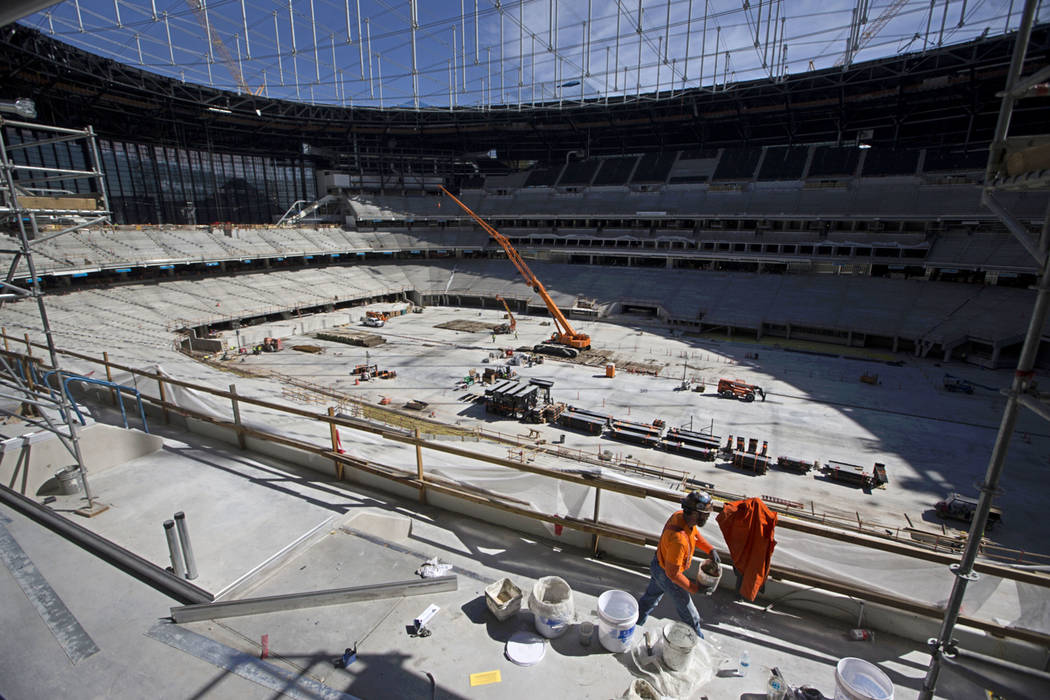 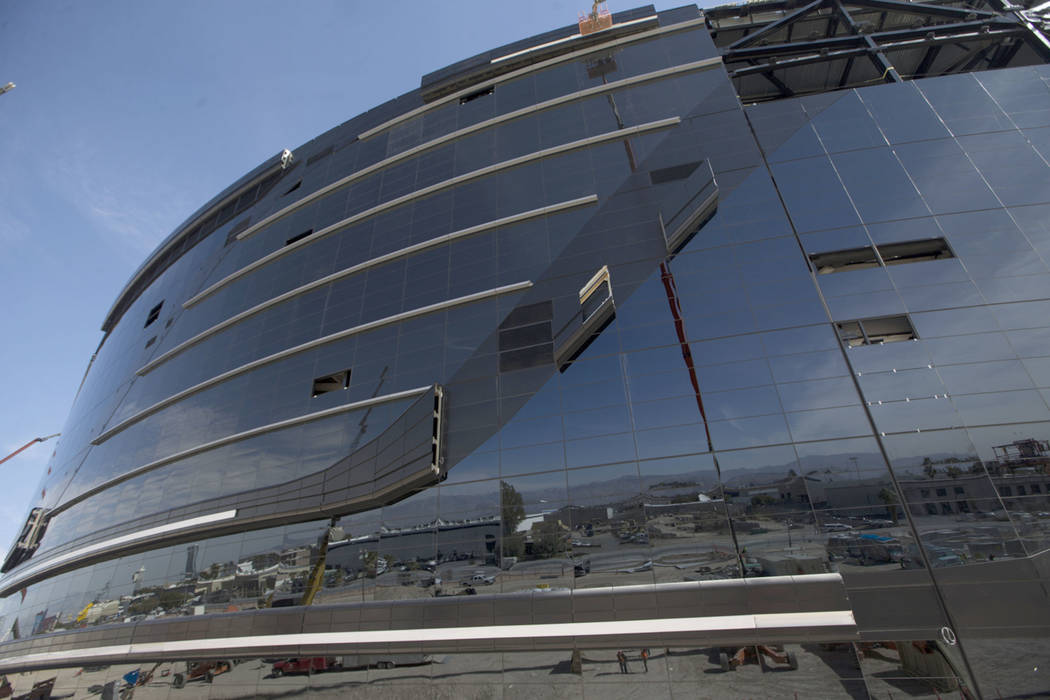 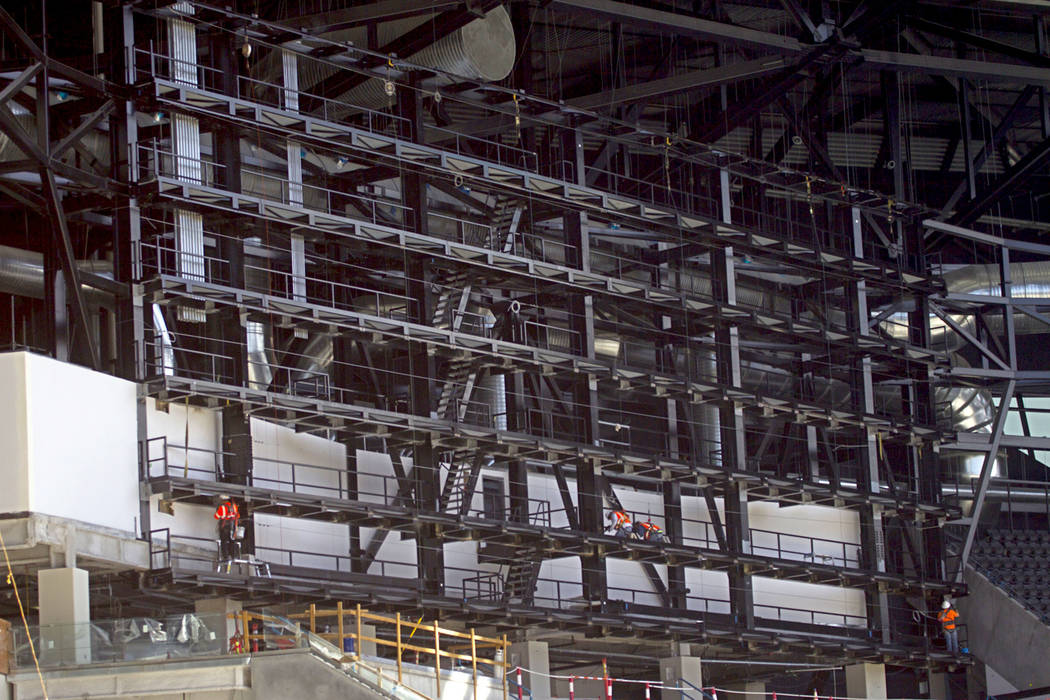 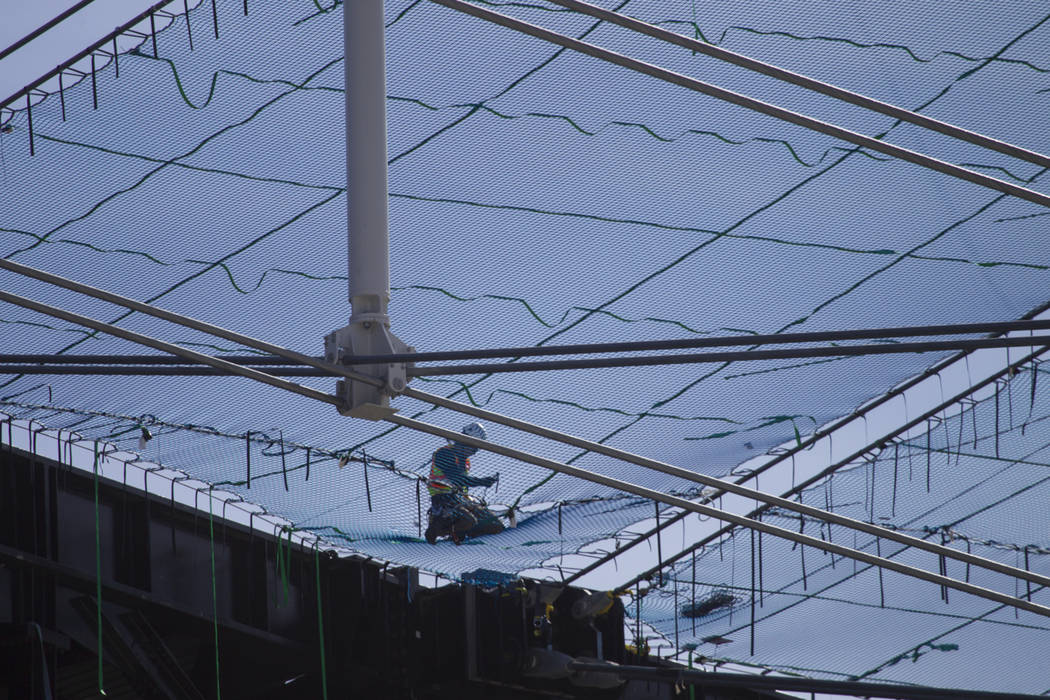 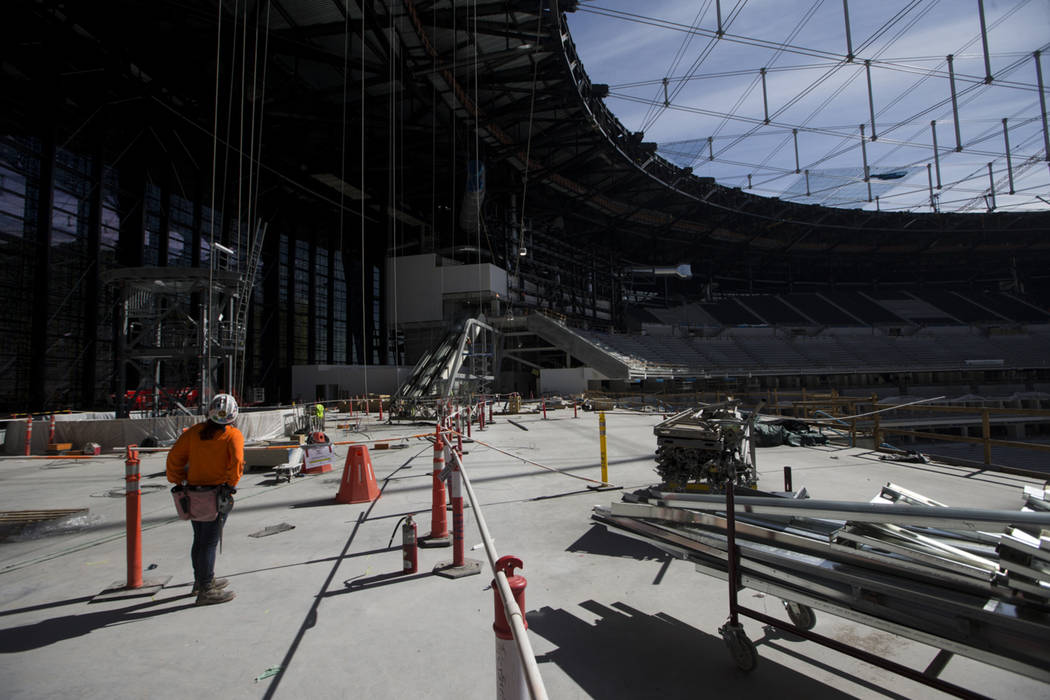 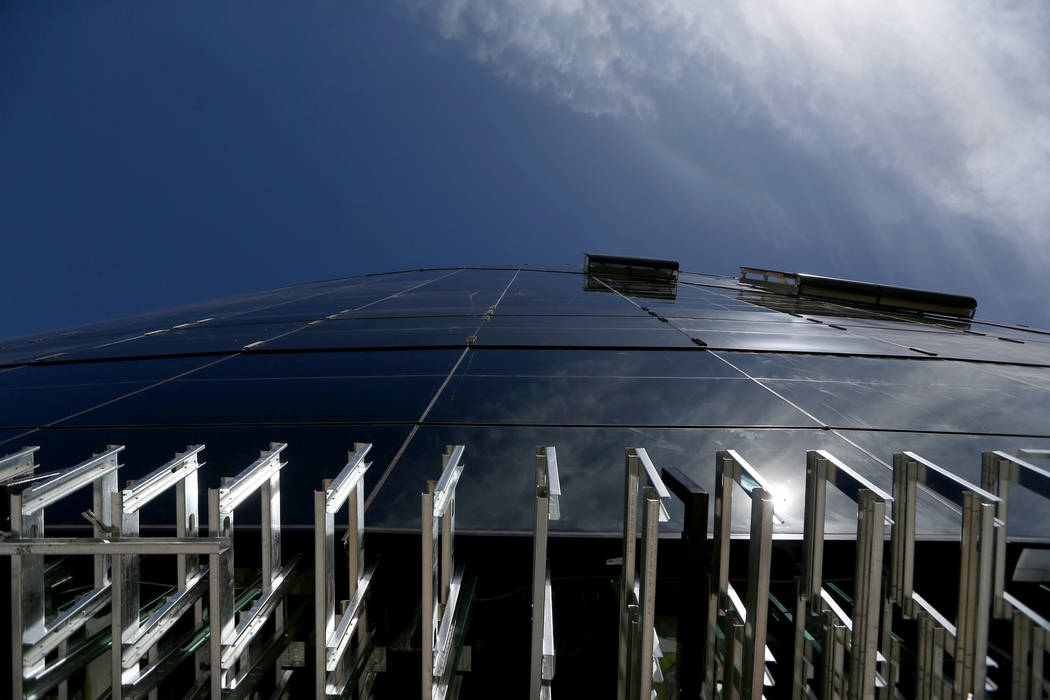 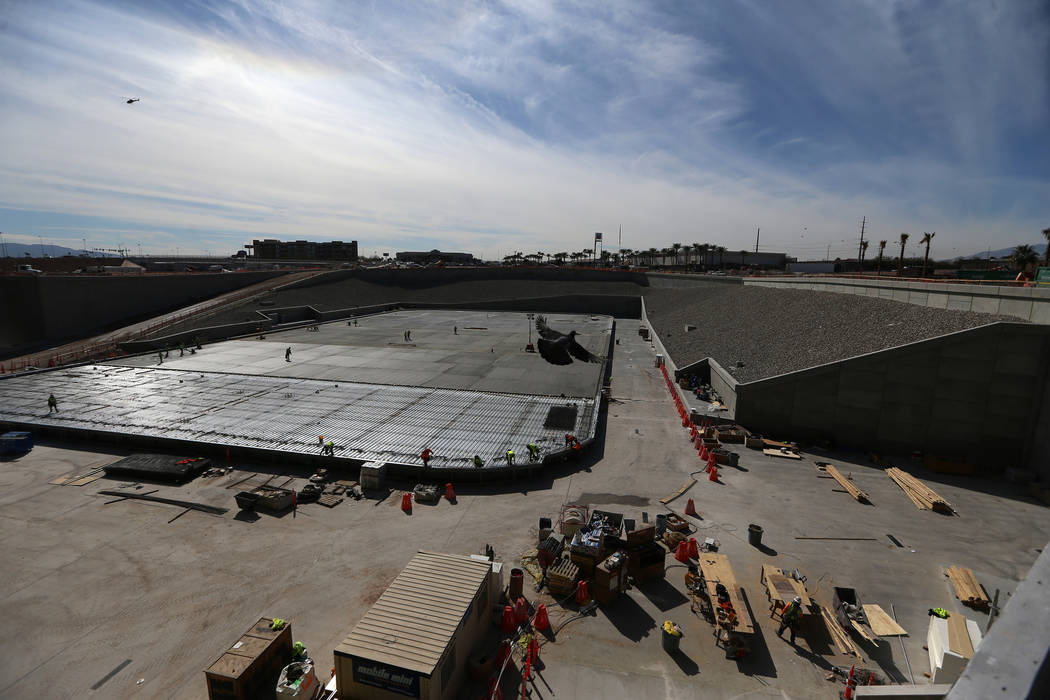 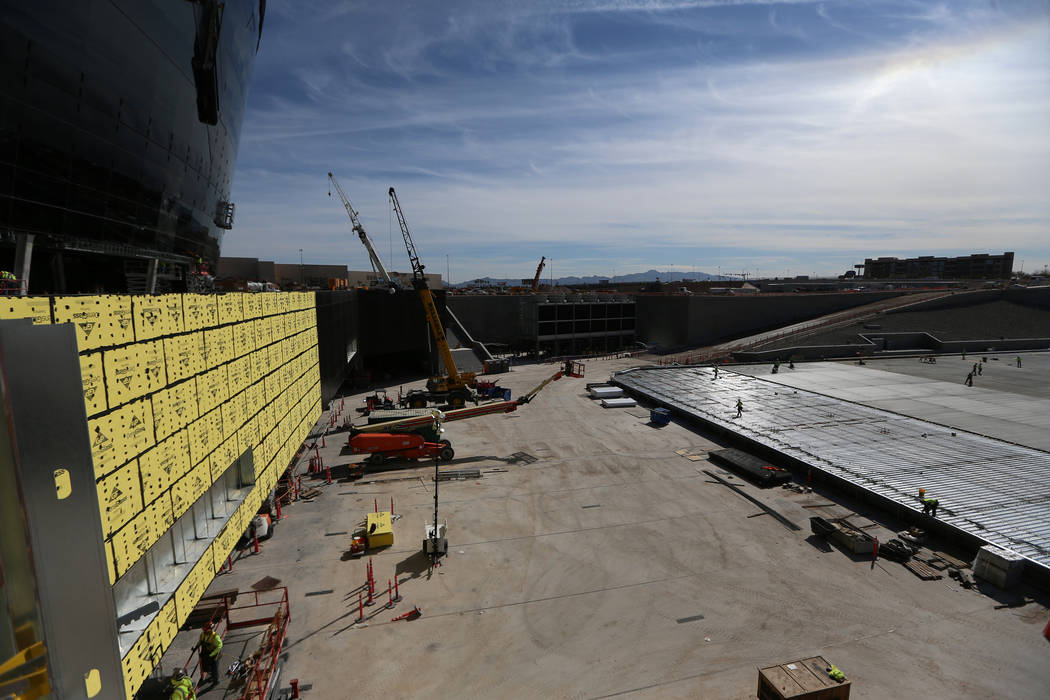 It’s almost imperceptible from down below against Southern Nevada’s late-winter blue sky.

On the northeastern corner of the roof of Allegiant Stadium sits a tiny section of safety netting that eventually will be used in the installation of a 7-acre translucent plastic polymer roof, one of the signature attractions of the Las Vegas Raiders’ 65,000-seat future home.

Two sections of netting lie atop the stainless-steel cable net stretched across the top of the $2 billion building that is still five months from completion.

Representatives of the Raiders showed off the latest progress in a one-hour tour Tuesday that included updated looks of dozens of seats installed in the highest levels of the stadium, the nearly completed motorized lanai doors on the north end of the building and the 9,500-ton field tray taking shape outside the south end of the stadium.

The roof is the feature that has received the most attention over the past seven months. Construction crews from the Mortenson-McCarthy Joint Venture were preparing to lift the cable-net system from the stadium floor to the roof in August. After the stress of pulling the cables taut from several nodes lining the roof caused some bolts to break, several teams of engineers analyzed and worked to solve the problem.

Crews kept pushing back “the big lift,” and at the last Las Vegas Stadium Authority meeting in January, executives said they didn’t expect the lift to be completed until May. While the late completion of the roof was expected to tighten the schedule, Raiders officials said they were confident that substantial completion of the stadium would be completed by July 31 as planned. Officials noted that other construction projects within the stadium were completed ahead of the original schedule.

With delays on many people’s minds, Mortenson-McCarthy offered a surprise tweet on Friday that said the cable-net lift was completed and the ETFE roof support was in place. Raiders President Marc Badain confirmed the report.

By Tuesday’s tour, the first indications of progress toward installing sections of the plastic roof were put in place so that workers can begin assembling the giant aerial jigsaw puzzle. Officials have said the roof would be installed piece by piece while leaving sections open to extract cranes and other equipment from the ground before sealing it up.

Meanwhile, in the upper levels of the stadium, seats, some of them still covered by their cardboard boxes, have been put in place on several rows on the east and west sides.

On the north end of the stadium, finish work is underway on the 80-feet-by-215-feet lanai doors and the 85-feet artificial torch commemorating the memory of Raiders founder Al Davis. Crews also are working on the 128 suites and on another signature feature of the stadium, the field tray.

With the help of 76 electric motors, the 4-feet-deep field tray containing grass, sand, gravel, irrigation, heating and drainage components will be wheeled on 13 rails through a 14-feet-by-240-feet opening on Fridays before Sunday game days.