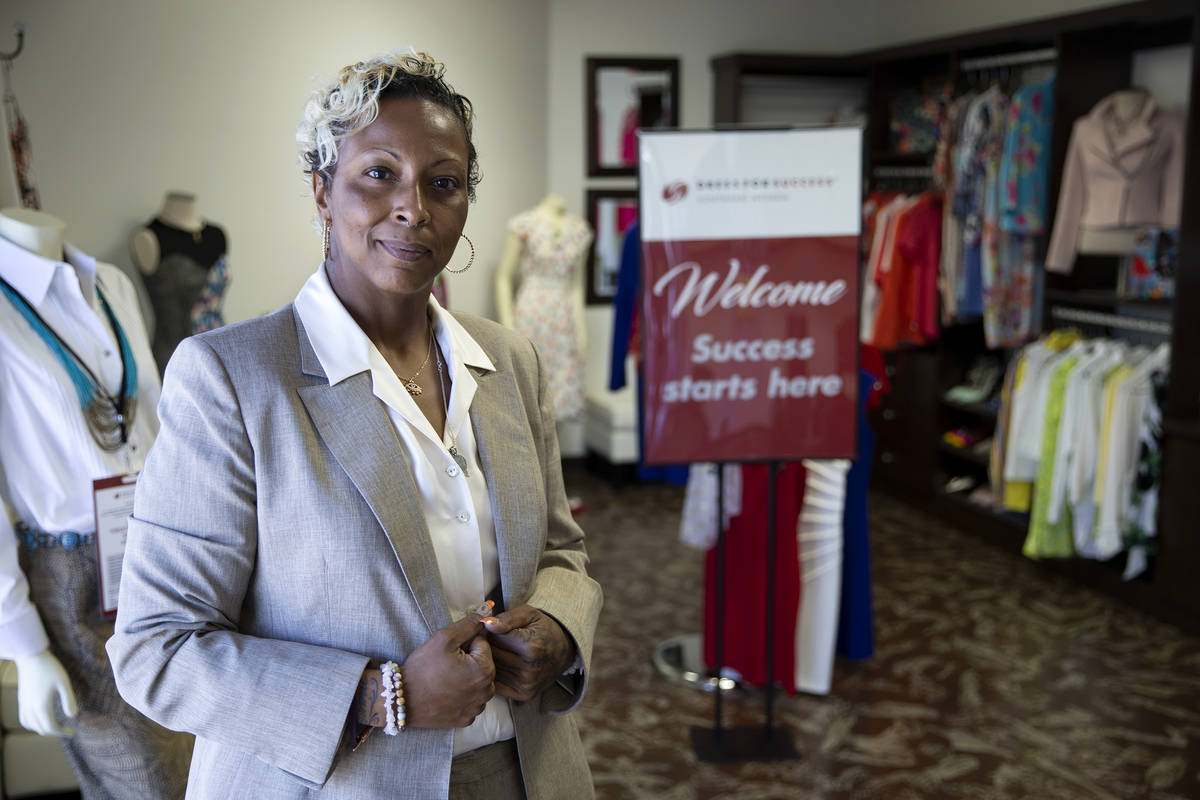 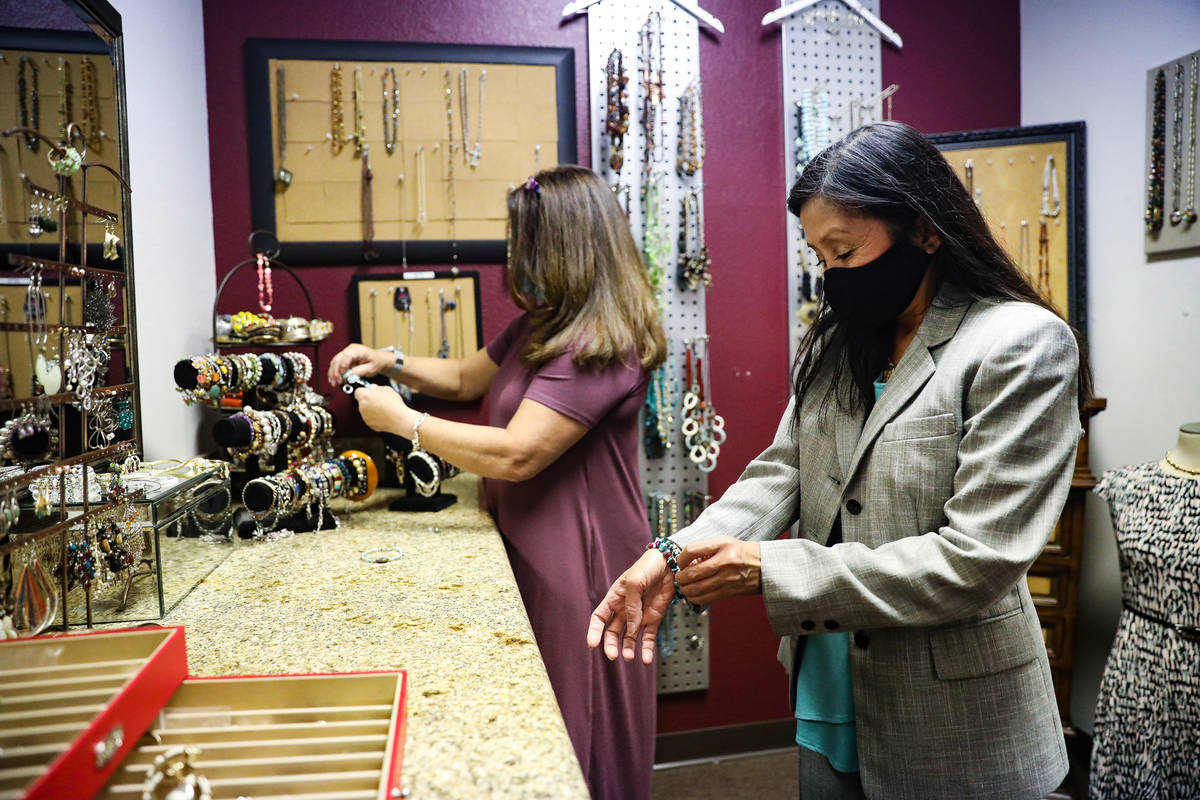 Nancy Sonano, right, tries on a bracelet for her outfit with help from stylist Mindi Fasnacht, left, at Dress For Success in Las Vegas, Tuesday, July 13, 2021. The nonprofit helps women in grim financial situations get clothing for job interviews and work and at the same time a network of support and career development tools. (Rachel Aston/Las Vegas Review-Journal) @rookie__rae 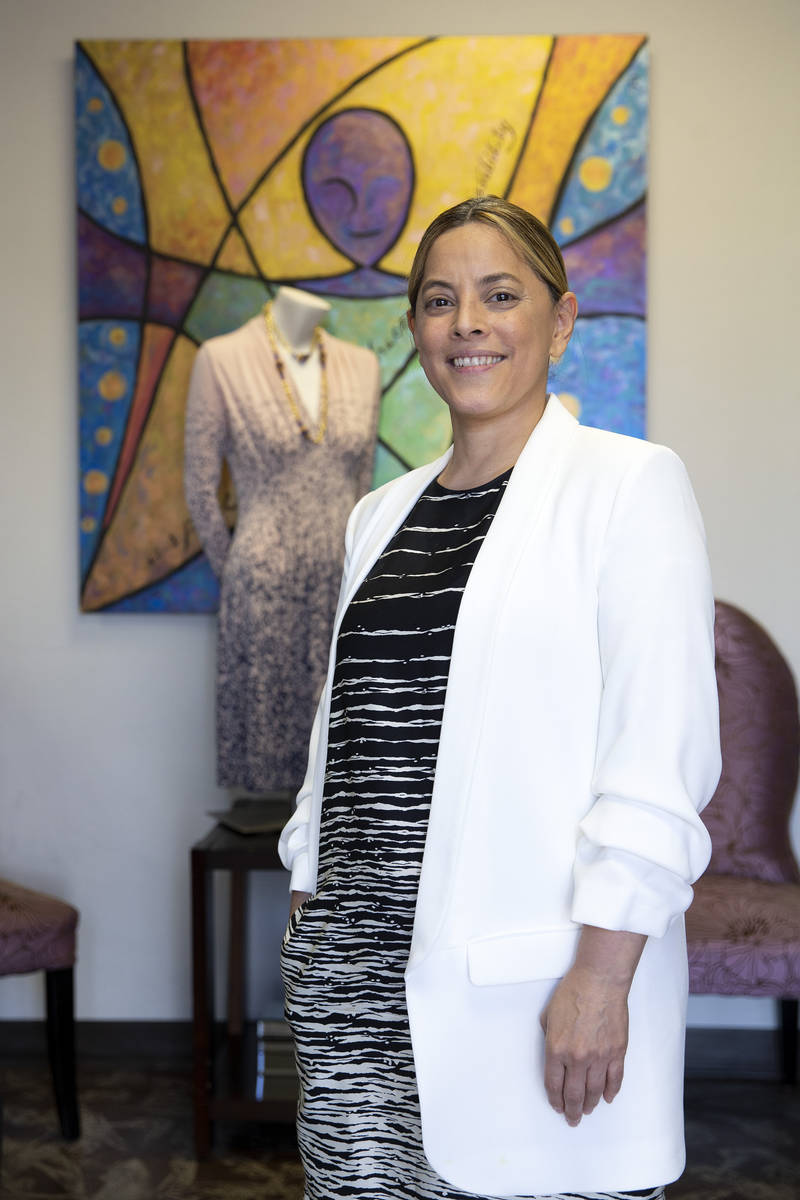 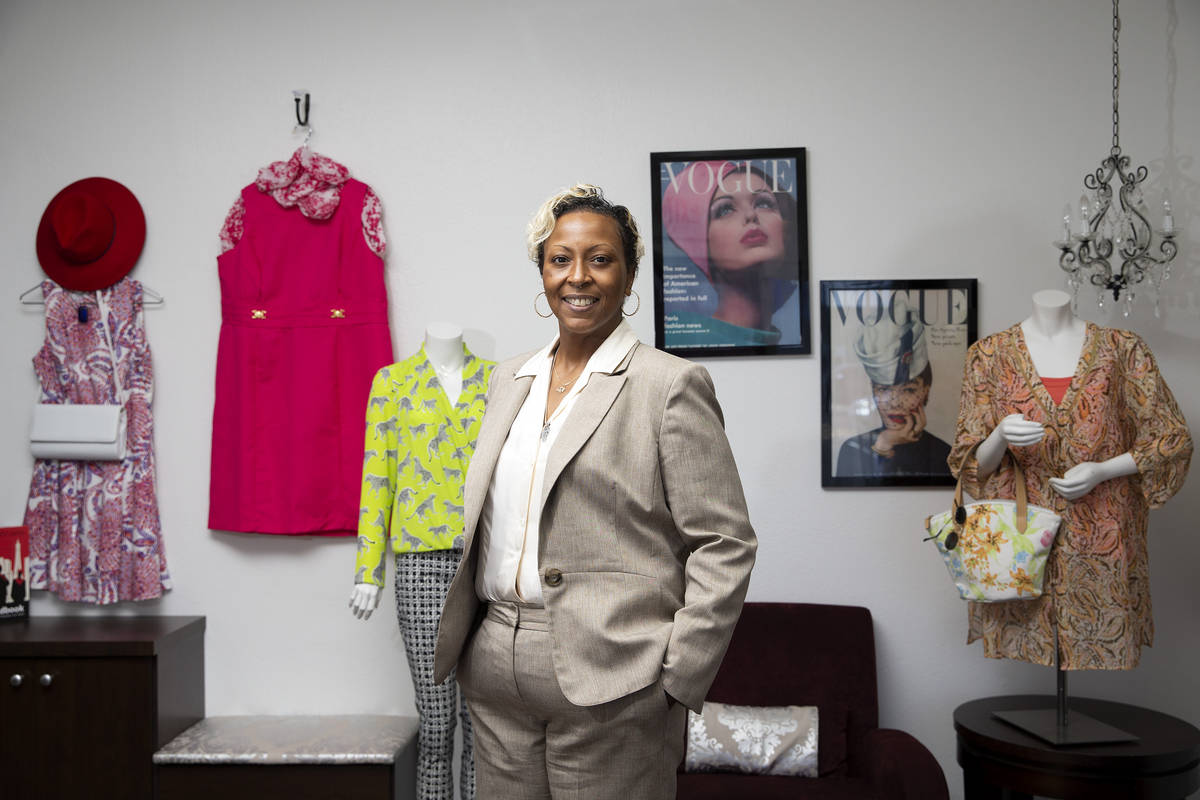 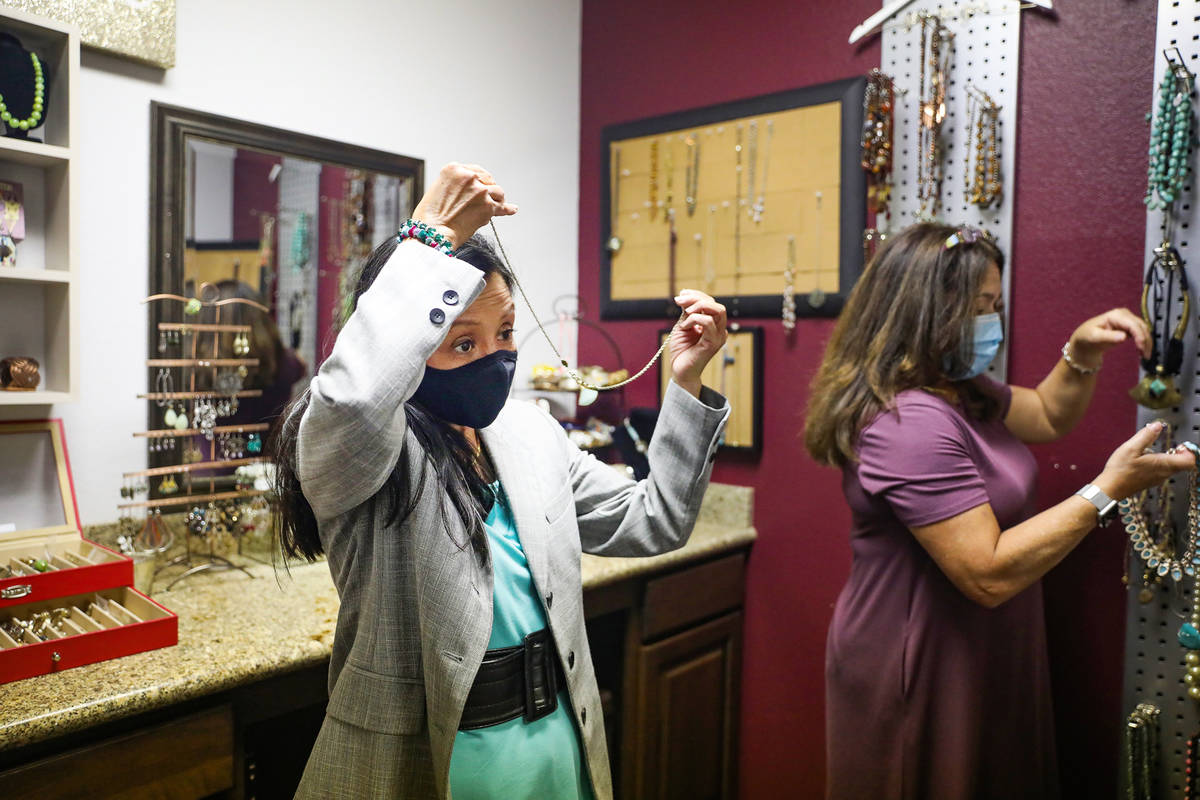 Nancy Sonano, left, tries on a necklace for her outfit with help from stylist Mindi Fasnacht, right, at Dress For Success in Las Vegas, Tuesday, July 13, 2021. The nonprofit helps women in grim financial situations get clothing for job interviews and work and at the same time a network of support and career development tools. (Rachel Aston/Las Vegas Review-Journal) @rookie__rae 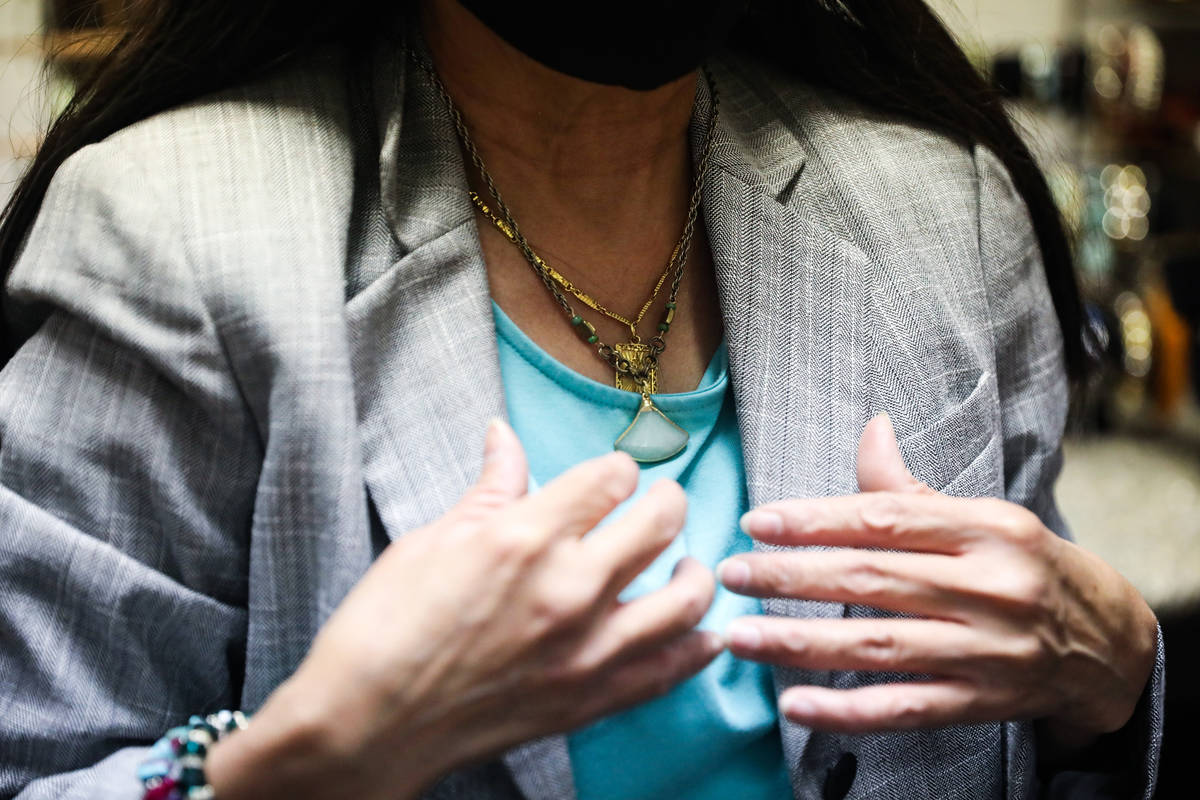 Nancy Sonano, right, tries on a necklace for her outfit at Dress For Success in Las Vegas, Tuesday, July 13, 2021. The nonprofit helps women in grim financial situations get clothing for job interviews and work and at the same time a network of support and career development tools. (Rachel Aston/Las Vegas Review-Journal) @rookie__rae 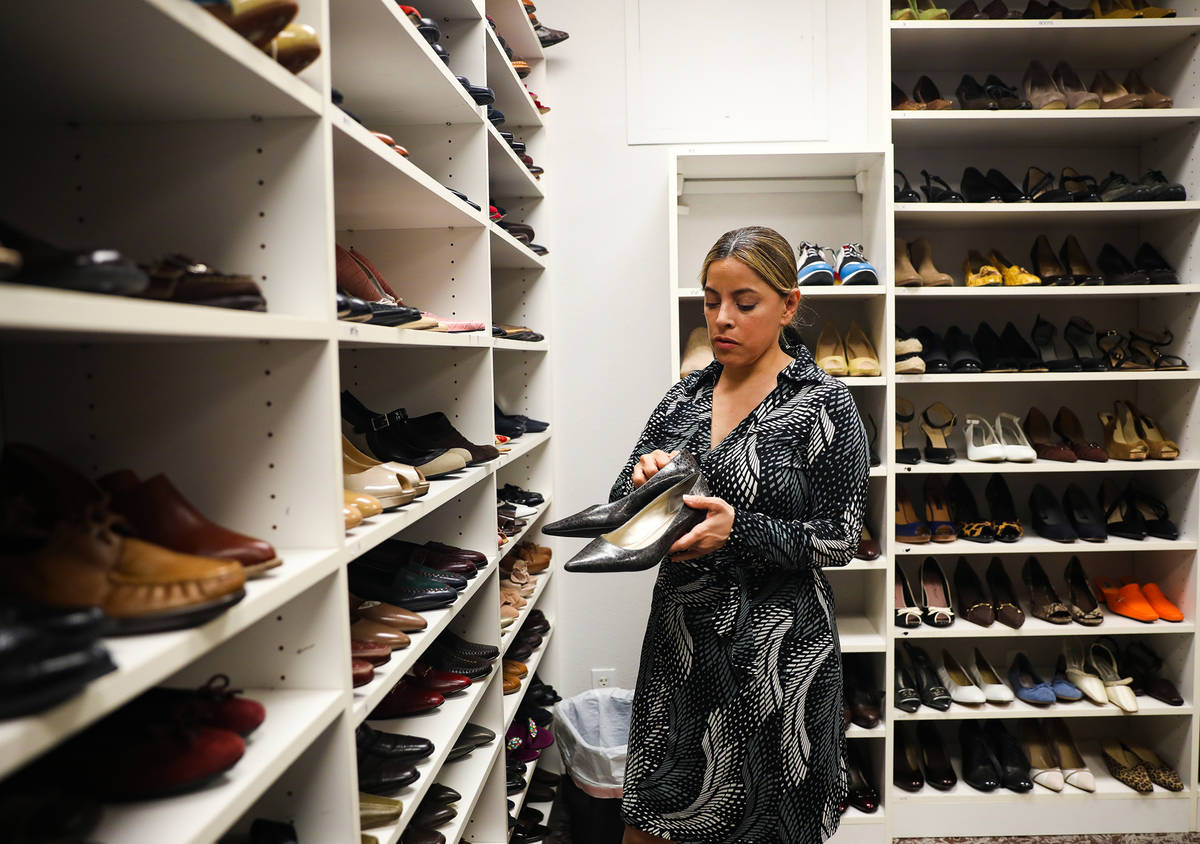 Norma Intriago, executive director of Dress For Success of Southern Nevada, shows the Review-Journal the dozens of shoes available for women at Dress For Success in Las Vegas, Tuesday, July 13, 2021. The nonprofit helps women in grim financial situations get clothing for job interviews and work and at the same time a network of support and career development tools. (Rachel Aston/Las Vegas Review-Journal) @rookie__rae 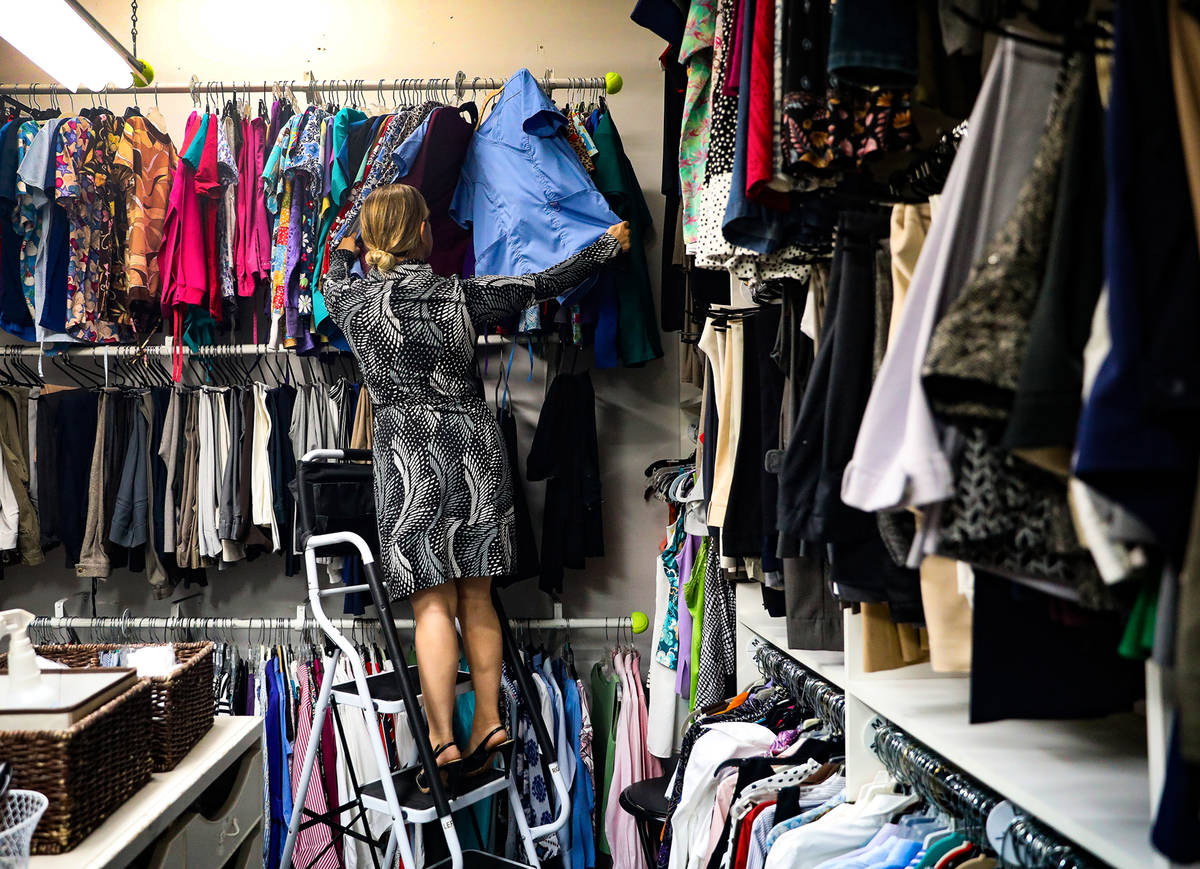 Norma Intriago, executive director of Dress For Success of Southern Nevada, shows the Review-Journal the clothing and scrubs available to women at Dress For Success in Las Vegas, Tuesday, July 13, 2021. The nonprofit helps women in grim financial situations get clothes for job interviews and work and at the same time a network of support and career development tools. Intriago says they serve a lot of frontline workers. (Rachel Aston/Las Vegas Review-Journal) @rookie__rae 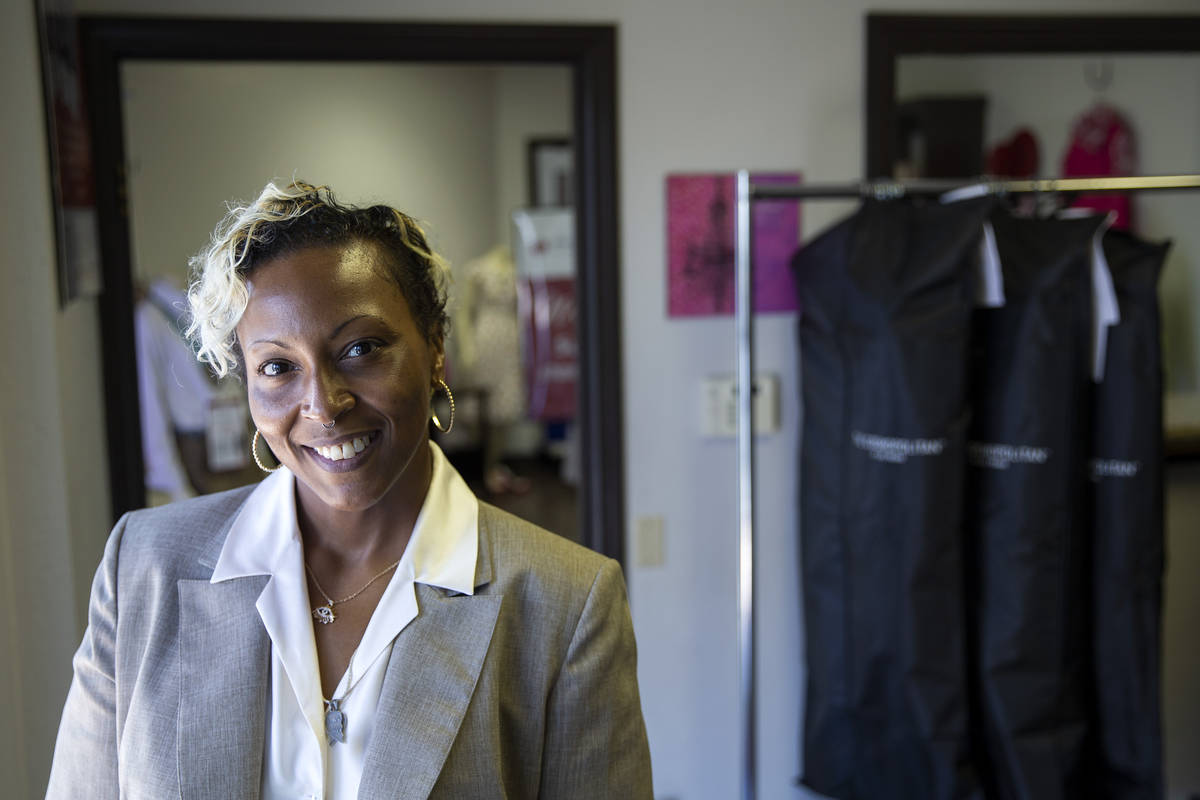 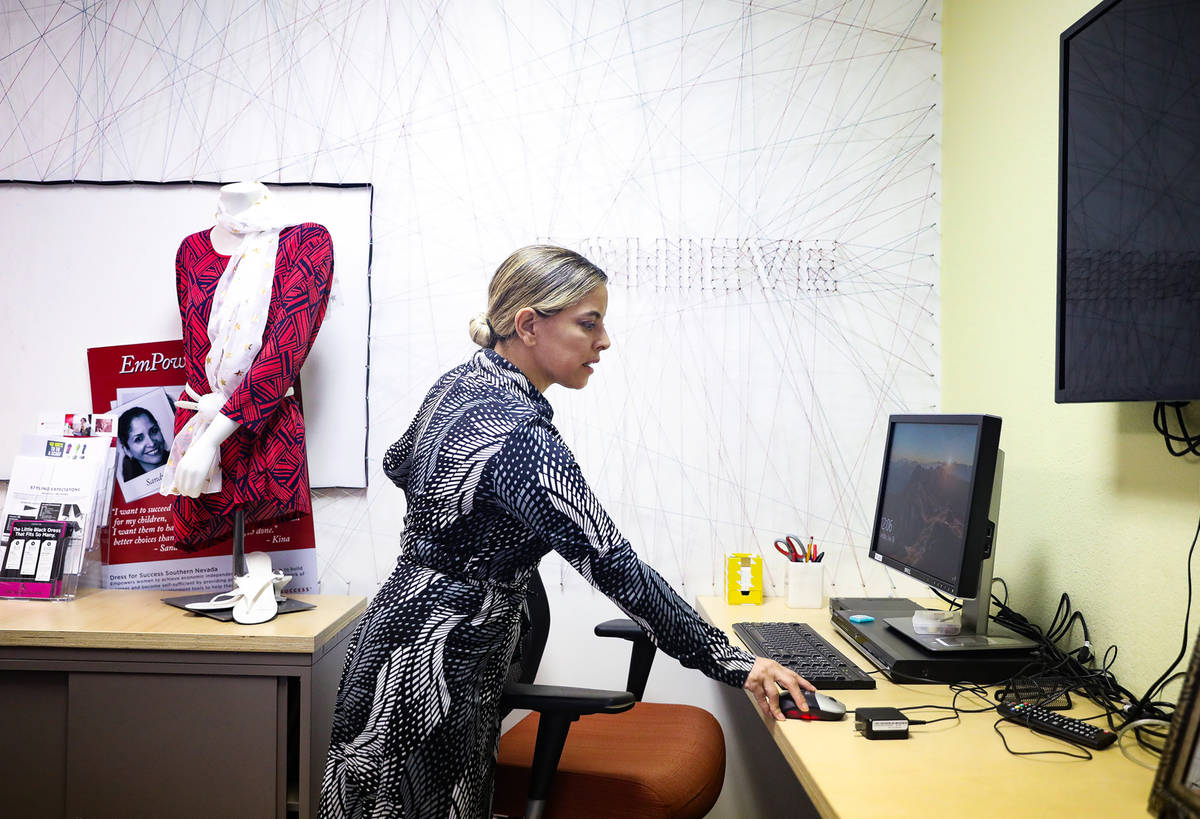 Norma Intriago, executive director of Dress For Success of Southern Nevada, shows the Review-Journal the office area where women can get assistance and use the computer at Dress For Success in Las Vegas, Tuesday, July 13, 2021. The nonprofit helps women in grim financial situations get clothing for job interviews and work and at the same time a network of support and career development tools. (Rachel Aston/Las Vegas Review-Journal) @rookie__rae 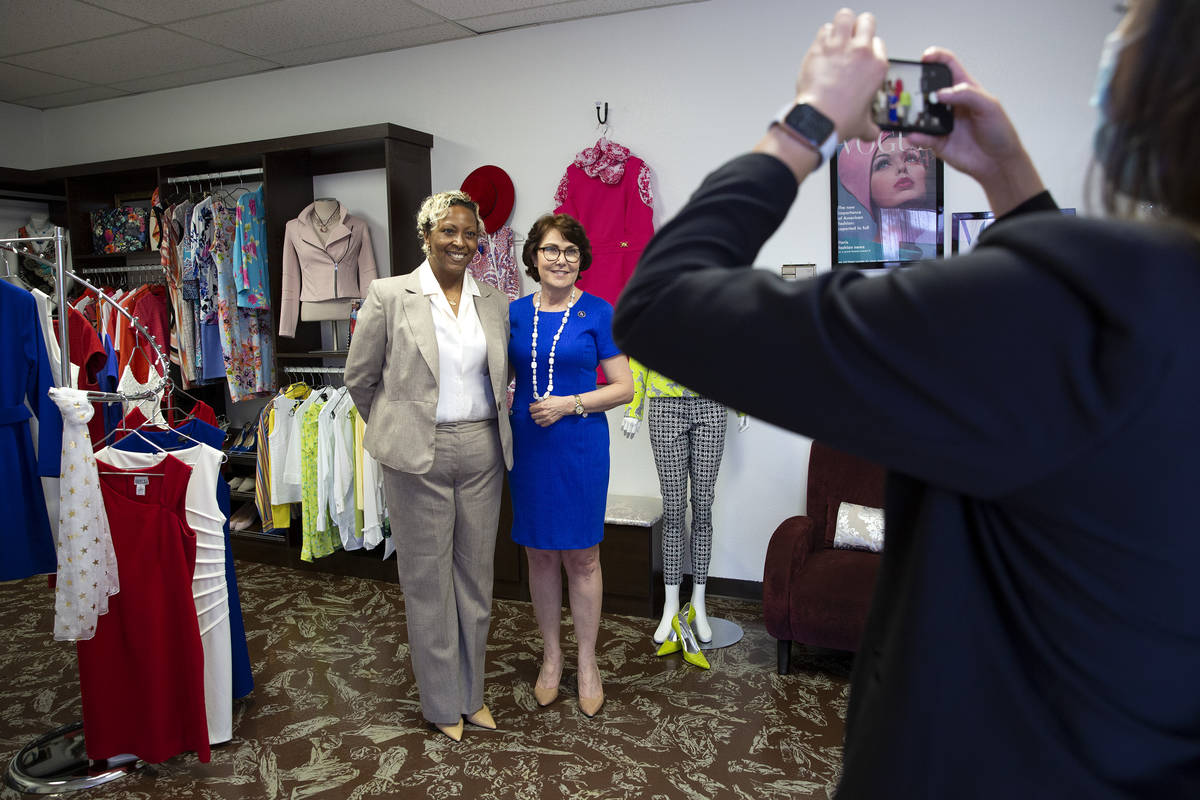 Kenya Mills and Sen. Jacky Rosen, D-Nev., pose for a photo at nonprofit Dress for Success Southern Nevada on Tuesday, July 6, 2021, in Las Vegas. Mills, a Dress for Success client, and Sen. Rosen discussed women re-entering the workforce after leaving due to the COVID-19 pandemic. (Ellen Schmidt/Las Vegas Review-Journal) @ellenschmidttt 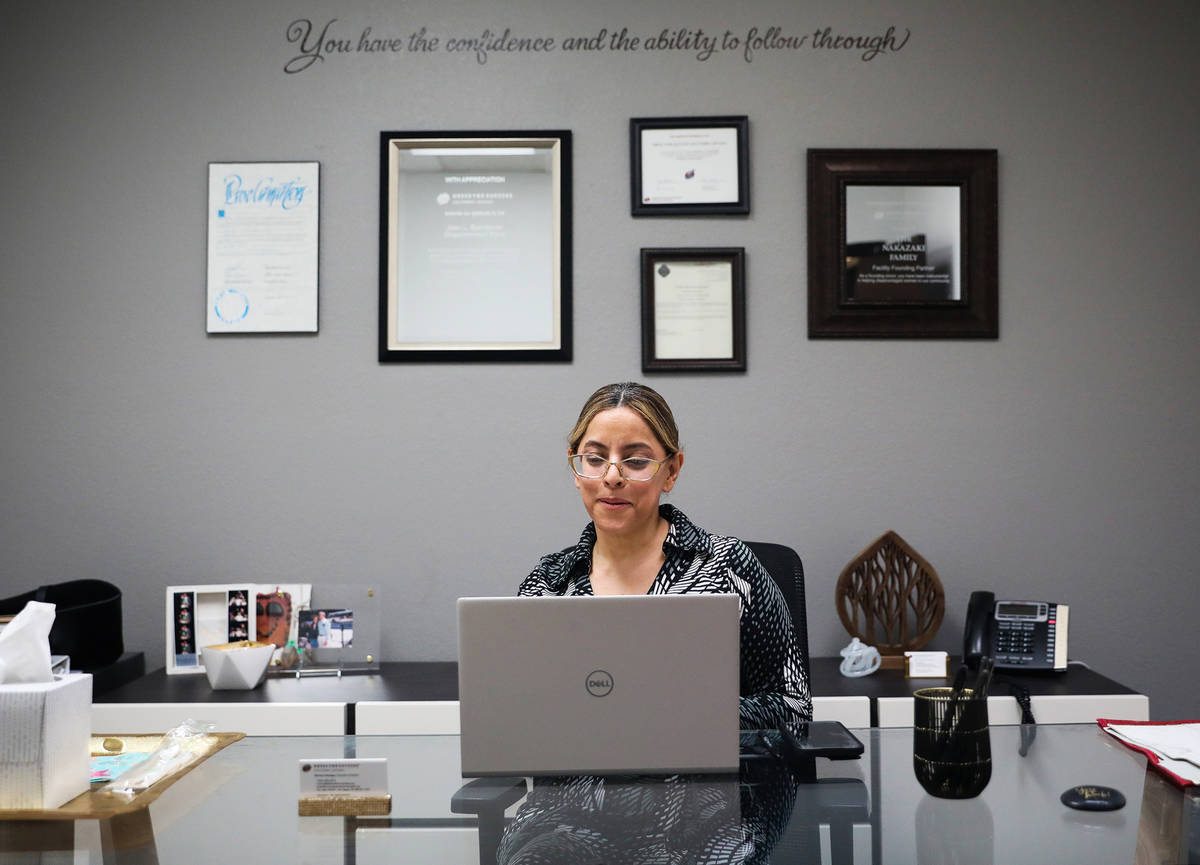 Norma Intriago, executive director of Dress For Success of Southern Nevada, works at her desk at Dress For Success in Las Vegas, Tuesday, July 13, 2021. The nonprofit helps women in grim financial situations get clothing for job interviews and work and at the same time a network of support and career development tools. (Rachel Aston/Las Vegas Review-Journal) @rookie__rae

Kenya Mills sees the struggle women face through a Zoom screen as they take care of their families and search for the right job. As a social worker for the Clark County School District, she spent the school year watching mothers balance the need to provide — both in paychecks and in child care.

Many women nationwide have yet to return to full-time work despite hiring signs on seemingly every street, particularly among Las Vegas’ active leisure and hospitality sector. But it’s not as simple as filling out an application form.

As job fairs across the Las Vegas Valley recruit more workers, advocates want to address the reasons women experienced deep job cuts during the height of the COVID-19 pandemic.

Experts say reducing the steep impact on women in the workforce will take changes to the systems surrounding work, child care — and time.

Unemployment in Nevada has dropped significantly since its peak in spring 2020, when lockdowns pushed nearly 30 percent of workers out of the labor market. In May 2021, 8.7 percent of Nevada women were unemployed, according to state data.

But a June 14 report focusing on the Nevada economy in April pointed out how groups with historically high unemployment and some demographics, including Black women, Hispanic women and Black men, are still struggling.

“With prime-age women seeing significant differential impacts, it also appears likely that the reduction in available supports for families with children such as child care and in-person schooling are affecting labor market participation and that these women may have the most to gain from a return to more normal economic activity,” according to the report.

Economists say it’s not as simple as flipping a switch — just because there are jobs available, doesn’t mean everything else around the workforce is ready for workers, said Jeff Waddoups, a labor economist and chair of the University of Nevada, Las Vegas Department of Economics.

“There’s a lot of moving parts that go into making (a dual-career household) happen,” Waddoups said. “With the disruption of the pandemic, both those working parts stopped working. You can’t just immediately go back to work when there are job openings. That’s because you don’t have day care set up — there’s less day care than there used to be or maybe it’s more expensive.”

Some workers who may want to return still could be holding off because of how a new work schedule could disrupt others in their household.

“It could take quite a while to get us back to where we were before, just because of how complicated it is for workers to make a decision that they’re going to work,” Waddoups said. “They’re going to fit that into their household routine. Now they’ve got a new routine. To fit work in, they have to disrupt their new routine and it’s just not that easy.”

It’s something that Dress for Success of Southern Nevada leaders have seen in their clientele.

The nonprofit, which offers workforce readiness programming, networking and provided professional attire, typically serves about 1,000 women through referrals. That dropped by about half during the pandemic, Executive Director Norma Intriago said. She suspects that changed services from their referral agencies, and the pandemic’s barriers to the primarily women of color and single-mother-led households faced in their careers in the last year and a half.

Child care continues to be a challenge — even after some schools returned to in-person learning. Summer camp offerings are limited, children under 12 years old cannot yet be vaccinated, and the limited child-care options available are full or too expensive.

Mills, the social worker, said that has been a primary concern for her clients.

Barriers don’t stop there, Intriago said. Some women lack adequate transportation or live in multi-generational households and may be concerned about infecting an older family member.

“Right now, they’re in survival mode,” Intriago said. “It’s trying to figure out how they can balance all these things when the safety nets have gone out. Maybe the decision and their path moving forward and their re-entry to the labor market would look different if those safety nets were back on.”

One solution that would encourage Dress for Success’ clients to return is a higher wage to support the family, Intriago said.

They’re not alone. North Las Vegas resident Dawn Challenor said she has searched for an office management job for about three months but struggled to find one that pays in accordance with her years of experience.

“(A job) needs to be right when I need it,” Challenor said.

She has turned to creating a craft fair with other women selling homemade goods. It doesn’t pay like full-time work, she said, but gives her the time to look for the right job.

Challenor had 12 other vendors at the first show in February, and the list has grown to as many as 80. She said it’s a testament to the resilience of women who lost their jobs and found a new way to work.

“We’re making our own way through this world,” she said.

Some industry leaders say their workers may have used the time to re-evaluate their desires and career path. Mary Choi Kelly runs the MCK Leadership Talent Group, a human resources consultancy in Las Vegas. She said some hospitality-sector jobs could lose interest to its previous employees — or priority to work, generally.

“I think there’s a lot of different dynamics that are coming into play, including just people in general, I think, have reassessed their view of what work means in their lives,” she said. “Their decisions have changed quite a bit. It’s not just about career or financial stability or other things. I think the pandemic really brought a different perspective around health, overall quality of life.”

For companies, that means re-evaluating what they offer to employees, Kelly said. Necessity is the mother of invention, she said, and employers should highlight what makes them a better place to work — like flexible schedules, benefits, social responsibility and volunteerism efforts, and diversity, equity and inclusion efforts.

Ultimately, labor economists warn that patience is needed to get everyone who wants to work back to a job.

“I think that it’s going to get back to something that resembles normal — and by normal I mean pre-pandemic,” Waddoups, the UNLV economist, said. “It’s just going to take awhile. We have to be patient. You can’t just down an economy and then expect it to back up at the snap of a finger. The system is too complex for that.”