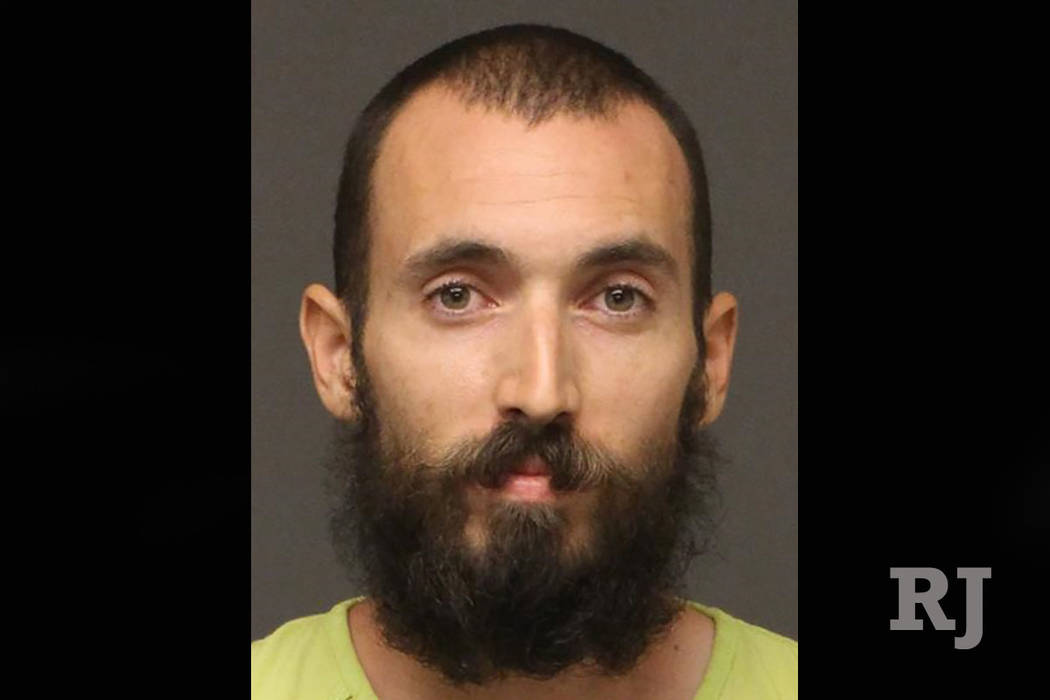 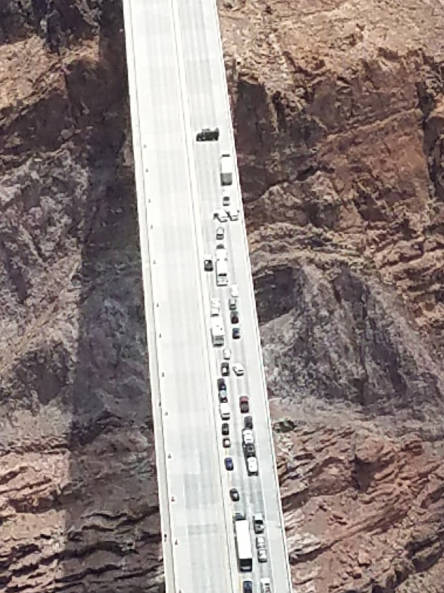 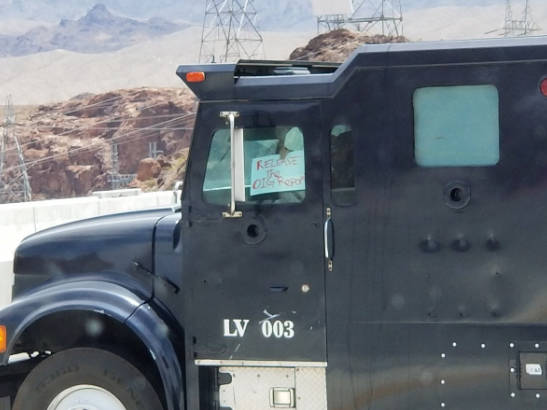 KINGMAN, Ariz. — A Henderson man facing terrorism charges in Arizona for using an armored vehicle to block traffic on the bridge near Hoover Dam has written letters from jail to President Donald Trump and other elected officials bearing the motto of a right-wing conspiracy group known as QAnon.

The letters do not explain Matthew Wright’s motive for the 90-minute incident on the Mike O’Callaghan-Pat Tillman Memorial Bridge on June 15, but they do contain an intriguing clue. Both include the signoff “For where we go one, we go all.”

That phrase is popular among followers of QAnon, a murky plot unfolding online that casts Trump as the shrewd hero in a secret campaign to expose evil, left-wing global elites responsible for everything from child sex trafficking to the Oct. 1 massacre in Las Vegas.

Wright’s court-appointed attorney, Ira Shiflett, said he believes Wright mailed the handwritten letters from the Mohave County jail in Kingman to an unknown party, who arranged for them to be sent by certified mail from a post office in Henderson on June 30. Shiflett did not respond to a phone call Friday seeking comment on his client’s possible interest in QAnon.

In his letter to Trump, Wright called himself a “humble Patriot” and makes what seems to be a winking reference to the “Great Awakening,” a nickname for the “coming storm” that QAnon conspiracy buffs believe will soon bring down the mythical globalist cabal.

“My name is Matthew Wright and I wish to apologize for the disrespectful manner in which I have recently addressed you,” the letter to Trump stated, possibly in reference to a sign he held up during the bridge blockade demanding the release of the inspector general’s report on the Hillary Clinton email probe.

According to court records, the unemployed Marine veteran was armed with an AR-15 rifle, a handgun, multiple magazines of ammunition and a “flash bang” device when he parked a black armored truck on the bridge.

He eventually drove across the bridge into Arizona on U.S. Highway 93 but was turned back by a police roadblock. He surrendered to authorities after his tires were flattened by police spike strips and the vehicle became stuck on a dirt road in a remote part of the Lake Mead National Recreation Area.

No one was injured in the standoff.

In his other letter to multiple elected officials, Wright admitted to “a series of poorly constructed decisions that were based on emotional pain and a great deal of passion for our nation” but said he’s not being portrayed accurately by the media.

“I am no seditionist, nor do I wish to fight the government. I understand that the evil and corruption is limited to a select few in power and that the greater good is doing its best to combat this,” he wrote. “I never meant harm to my brothers and sisters. I simply wanted the truth on behalf of all Americans, all of humanity for that matter.”

Certified mail receipts indicate the second letter was sent to Nevada U.S. Sens. Dean Heller and Catherine Cortez Masto, Rep. Jacky Rosen, Mohave County Sheriff Doug Schuster and a host of federal agencies, including the Secret Service, the FBI and the CIA and the departments of Justice, Defense and Homeland Security.

Both letters appear to have a fingerprint or thumbprint stamped over Wright’s signature.

Extremism on the rise

“It’s hard to make solid statements about what’s going on in someone’s head, but if he’s a QAnon follower, it does make some sense,” UNLV sociology professor Robert Futrell said after reading Wright’s jailhouse letters. “He’s pretty mysterious in a sense because he doesn’t seem to have prior associations” with fringe groups.

Futrell, who has written extensively about white supremacists and the alt-right, said QAnon has already been rejected by some factions in the right-wing conspiracy world, but it remains popular enough to show up on the occasional billboard or on T-shirts for sale on Amazon.com.

“This is the landscape of right-wing extremism these days. It’s very muddled, very complicated,” Futrell said.

As a result, it can be hard to tell the people who pose a serious threat from those who are just trolling or playing around on message boards.

But Futrell said there’s no question that hate groups and other extremists “feel emboldened” these days, and the internet provides them with a lot more ways to communicate, recruit and organize activities than ever before. It’s no coincidence that the Southern Poverty Law Center has documented a rise in hate crimes in recent years, he said.

During his July 5 arraignment in Kingman, Wright pleaded not guilty to terrorism, aggravated assault, unlawful flight and weapons offenses.

The terrorism charge carries a possible prison term of 10 years to life.

A hearing is scheduled for Tuesday on a defense motion to reduce Wright’s $25,000 bond as he awaits trial.

Where the storm is coming from

The Q in QAnon apparently refers to a mysterious person claiming to be a high-level government operative with access to top secret information.

Last fall, Q began posting on 4chan message boards about a coming political storm in which President Donald Trump, with help from special counsel Robert Mueller’s real investigation, will expose the deep state and smash the left-wing syndicate of evil globalists that secretly runs the country.

In the QAnon world, this cabal of puppeteers is blamed for any number of atrocities, from a failed missile attack on Air Force One to staging the Oct. 1 mass shooting in Las Vegas. QAnon followers believe the evil elites also control academia and the media.

“This is how conspiracy theories go,” said UNLV sociology professor Robert Futrell, who has written extensively about alt right hate groups. “They call them bread crumbs,” bits of unrelated information strung together with no real evidence to fit someone’s particularly dark world view.