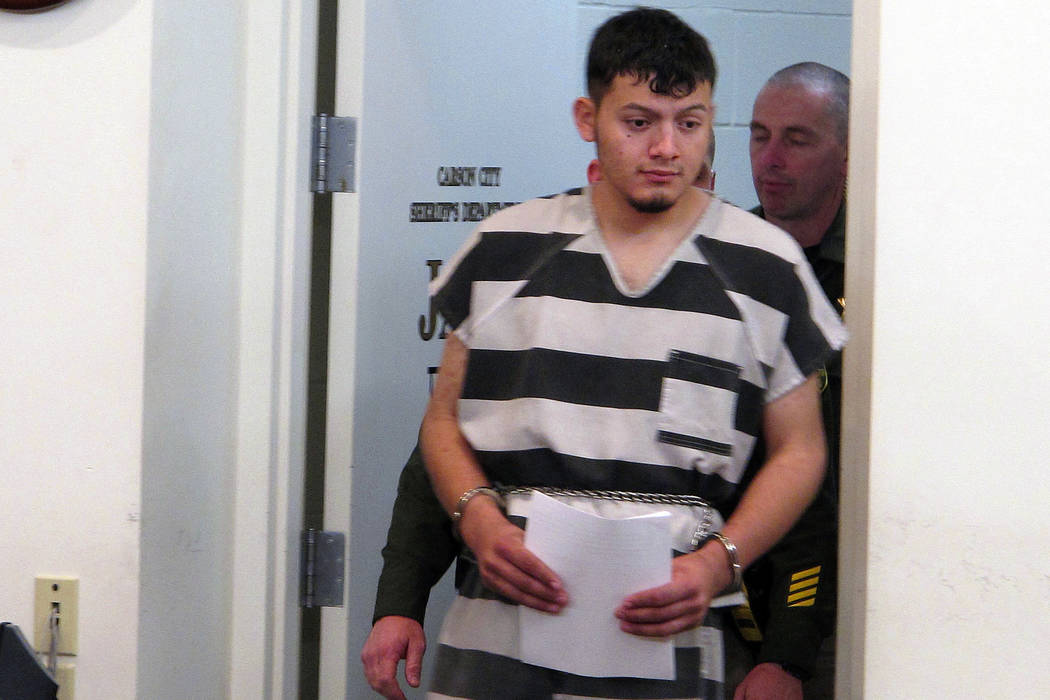 Wilber Ernesto Martinez-Guzman, 19, of El Salvador, is escorted into the courtroom for his initial appearance in Carson City Justice Court in Carson City, Nev. on Jan. 24, 2019. A grand jury has indicted Martinez-Guzman on murder charges in the killing of four northern Nevadans in January. (AP Photo/Scott Sonner) 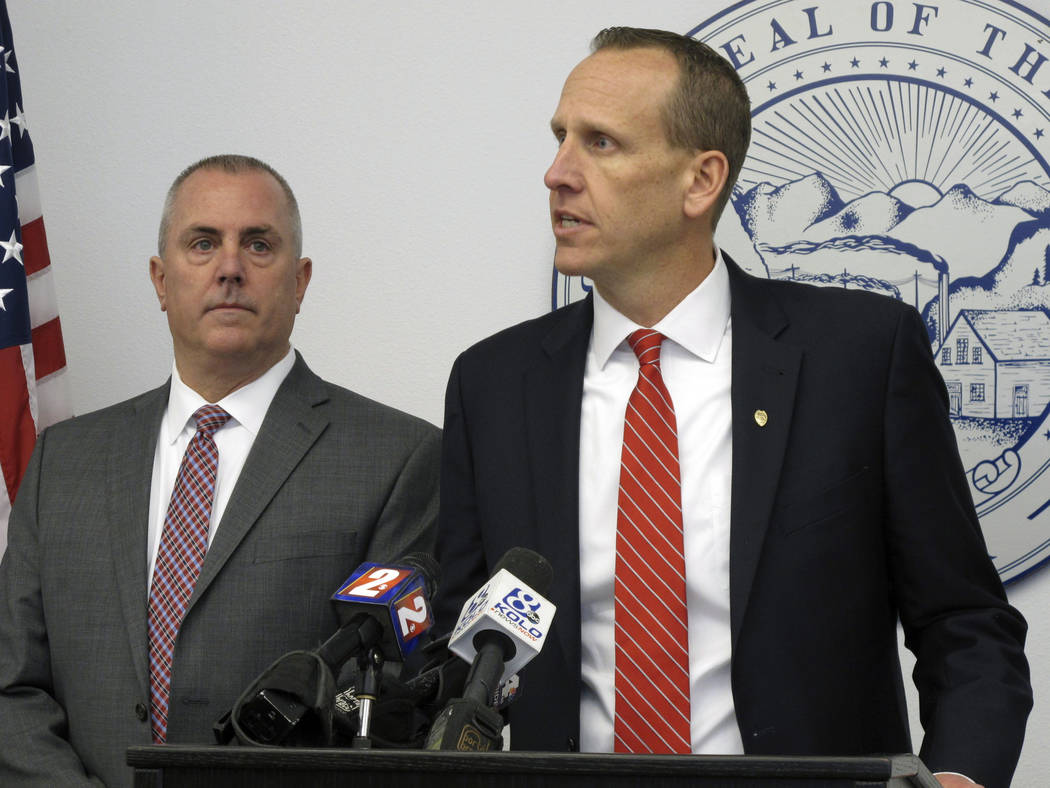 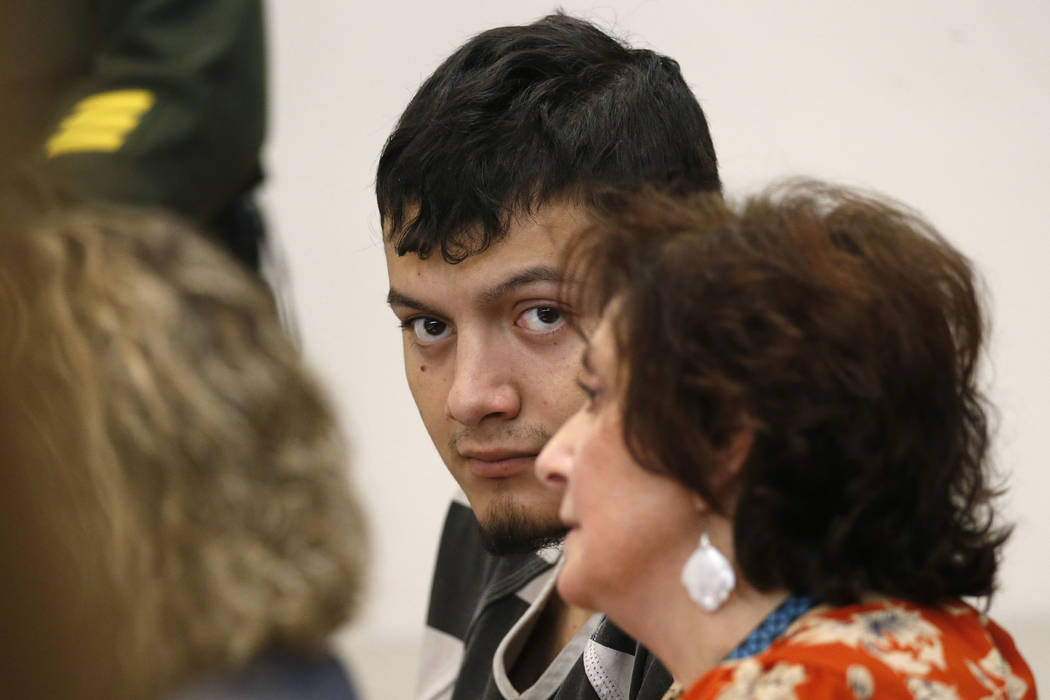 Wilber Martinez-Guzman appears in Carson City Justice Court on Thursday, Jan. 24, 2019. Martinez-Guzman, who is currently facing 36-counts of weapons and stolen property-related charges, is also expected to be charged with the murders of four people in Gardnerville and Reno in coming days. (Cathleen Allison/Las Vegas Review-Journal) 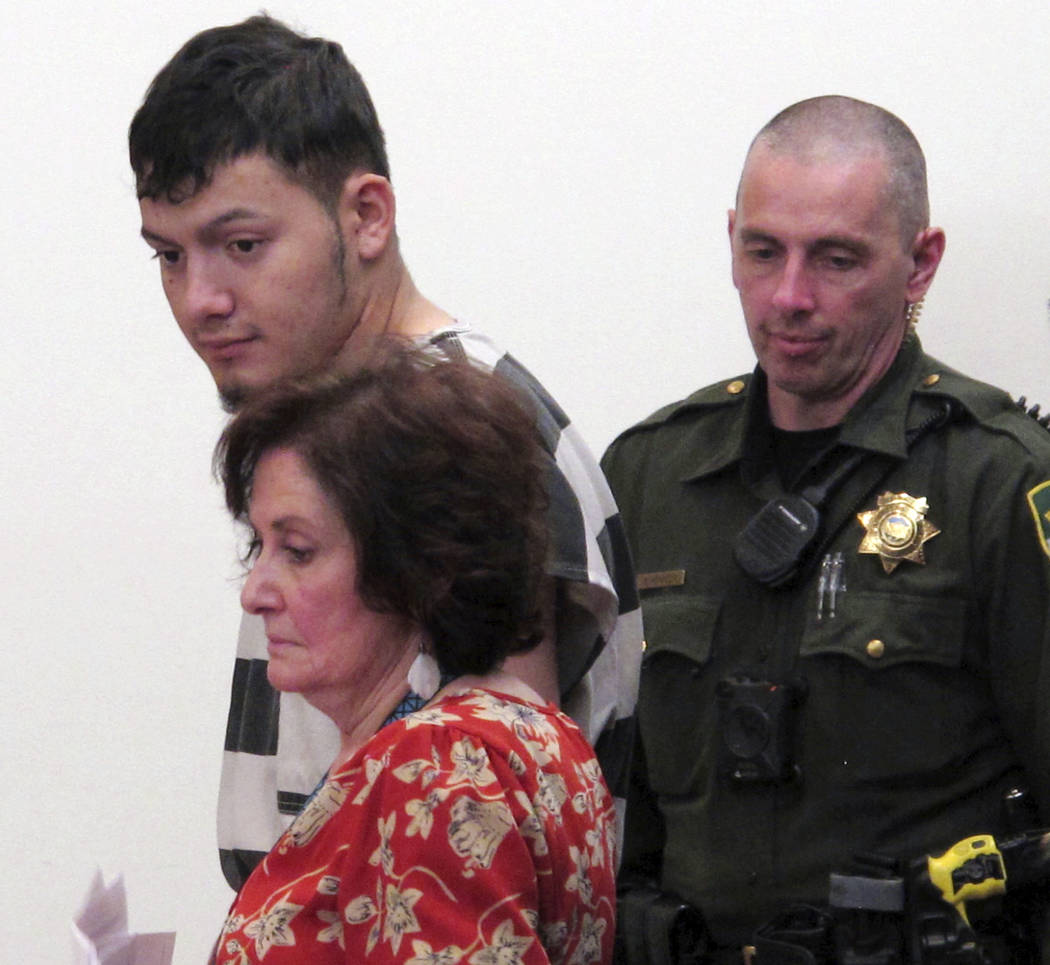 RENO — A detective says a Salvadoran immigrant charged with four Nevada murders told police he robbed and killed his elderly victims during a 10-day rampage in January because he needed money to buy methamphetamine.

The detective told the grand jury, which indicted Wilber Ernesto Martinez-Guzman in Reno last week, the 20-year-old who is living in the U.S. illegally broke into tears and repeatedly called himself an “idiot” before confessing to the murders during an interrogation hours after his arrest in Carson City on Jan. 19.

According to the grand jury transcript obtained by The Associated Press, Washoe County Sheriff’s Detective Stefanie Brady testified March 13 that Martinez-Guzman initially denied any wrongdoing and was smiling and giggling through part of the questioning.

But after she confronted him with several contradictions in his story during a nearly three-hour interrogation, he said through a Spanish interpreter he had “done something that’s unforgiveable.”

She says he told her he shot the victims “because of the drugs.”

“He said he needed the money for the meth and it was the meth,” Brady testified, according to the 268-page transcript filed late Tuesday in Washoe District Court.

A not guilty plea was entered on his behalf during an arraignment Tuesday. His trial isn’t scheduled to begin until April 2020.

His public defense attorney, John Arrascada, said in an email to AP he didn’t receive the grand jury transcript until Wednesday, was reviewing it and had no immediate comment.

Federal officials have said Martinez-Guzman is in the U.S. illegally but they don’t know how or when he crossed the border.

The case has drawn the attention of President Donald Trump, who says it shows the need for a border wall.

District Attorneys Chris Hicks of Washoe County and Mark Jackson of Douglas County announced last week they are seeking the death penalty but that Martinez-Guzman’s immigration status had nothing to do with that decision.

The four slaying victims include Gerald David, 81, and his 80-year-old wife, Sharon David, a prominent Reno Rodeo Association couple who had employed Martinez-Guzman as a landscaper last summer at their house where they were found dead Jan. 16.

Police say they were shot with a .22-caliber handgun that Martinez-Guzman stole from them earlier.

Court documents allege that Martinez-Guzman’s DNA was found on the same gun that was also used to kill Connie Koontz and Sophia Renken in their homes in Gardnerville south of Carson City.

Detective Brady told the grand jury that Martinez-Guzman was “engaging” and made “lots of eye contact” during the early stages of the interrogation at the Carson City sheriff’s office.

“He smiled, kind of giggled through some of the questions. But he was very engaged in the conversation,” she said.

After she read him his Miranda rights, “he actually acknowledged that he was fine not having an attorney because he hadn’t done anything wrong,” she said.

He indicated he had buried “a bunch of stuff” that he found by a river in Carson City. But when she confronted him about several contradictions, his answers became slower, his body posture was more slumped and he started touching his face uncontrollably.

When she asked him about some fishing poles that had been stolen from the Davids, “there was a really long pause. And at that point, he had dropped his head and began to cry with long deep breaths.”

“He said … something about if he tells me what he did, it’s not going to bring back the people that he shot,” she said, and then shortly after that blamed the killings on his need for money to buy drugs.

She said he initially denied he killed Renken, but ultimately acknowledged he shot her too.