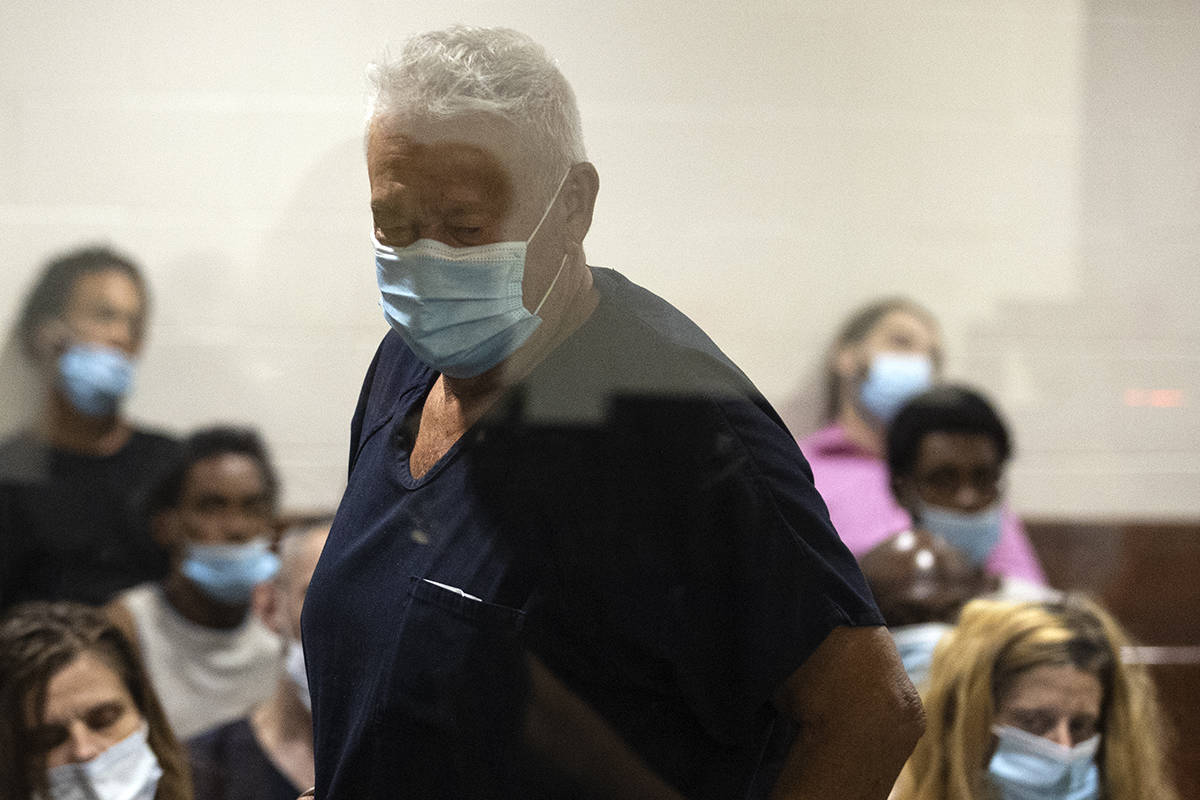 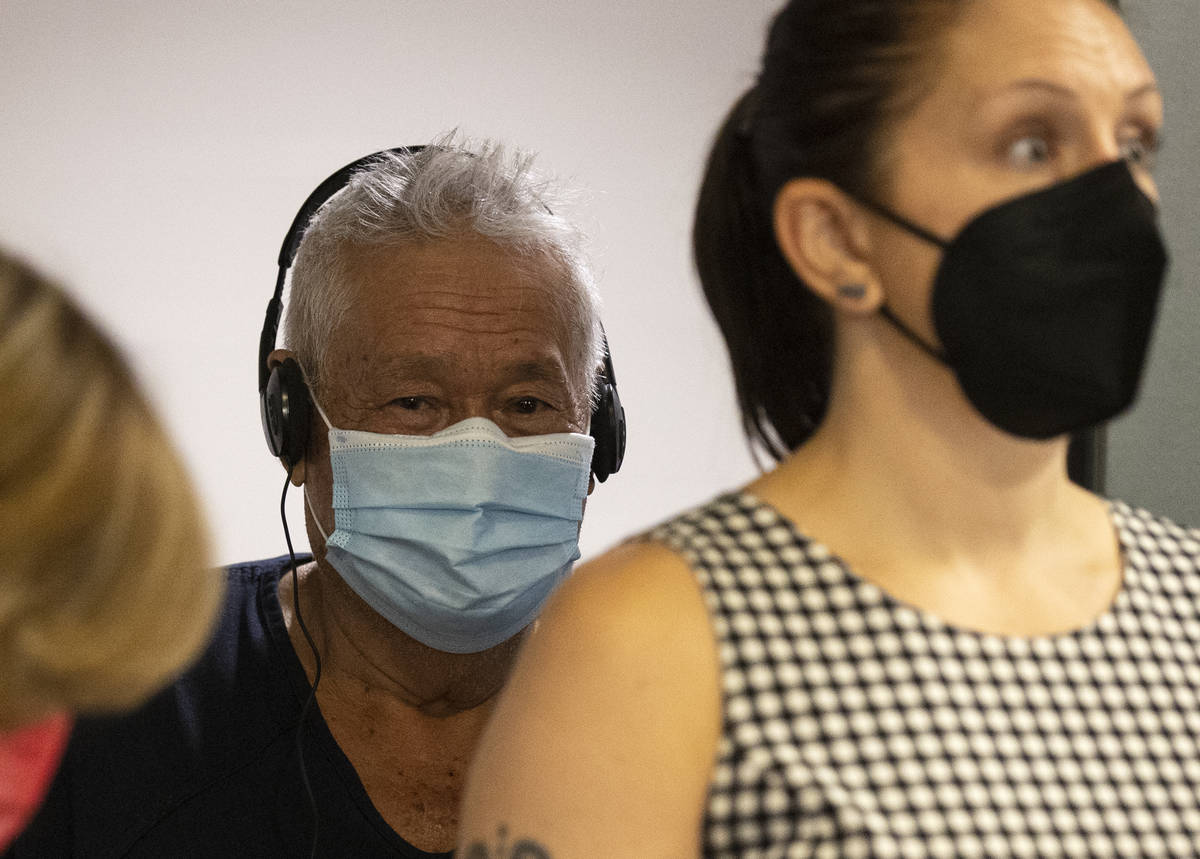 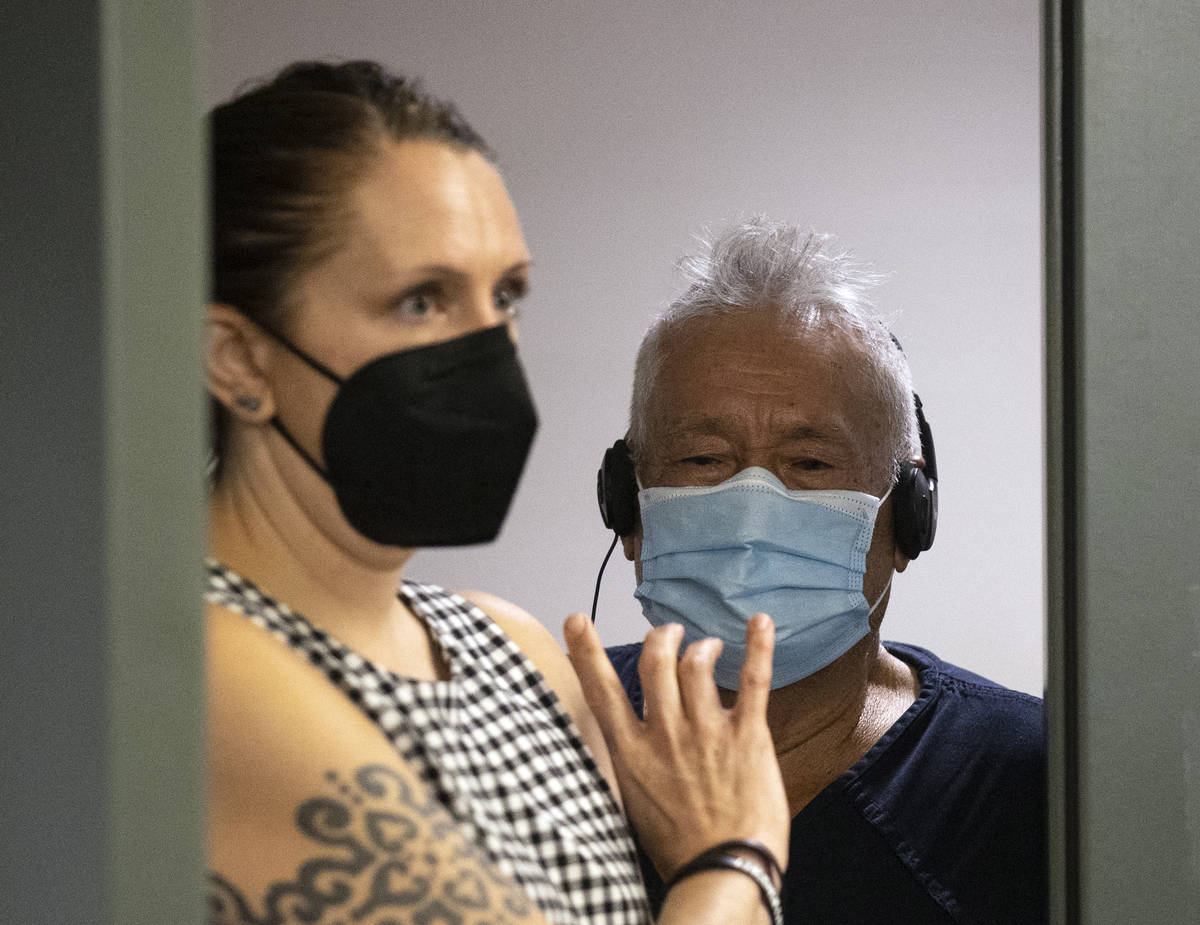 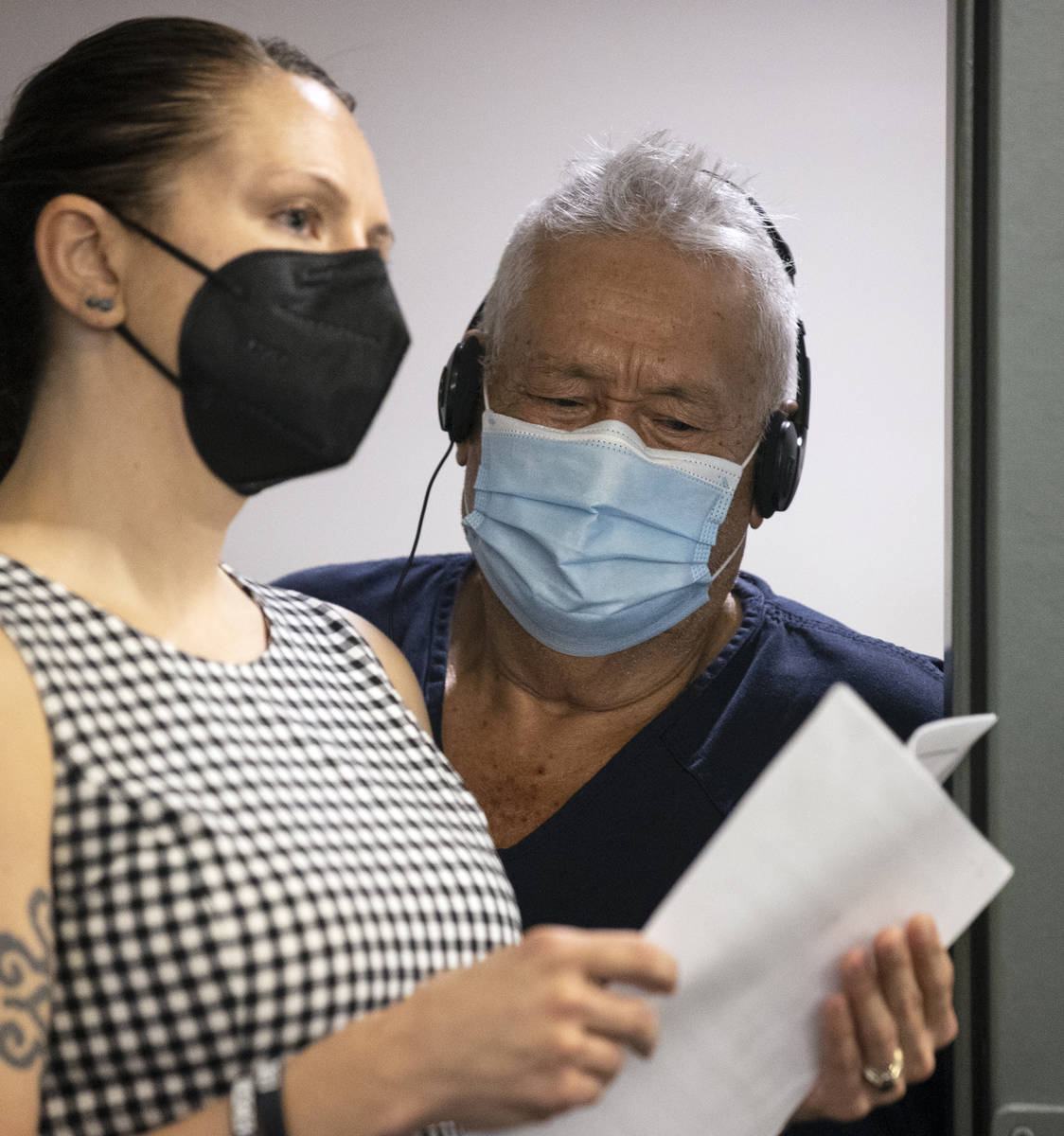 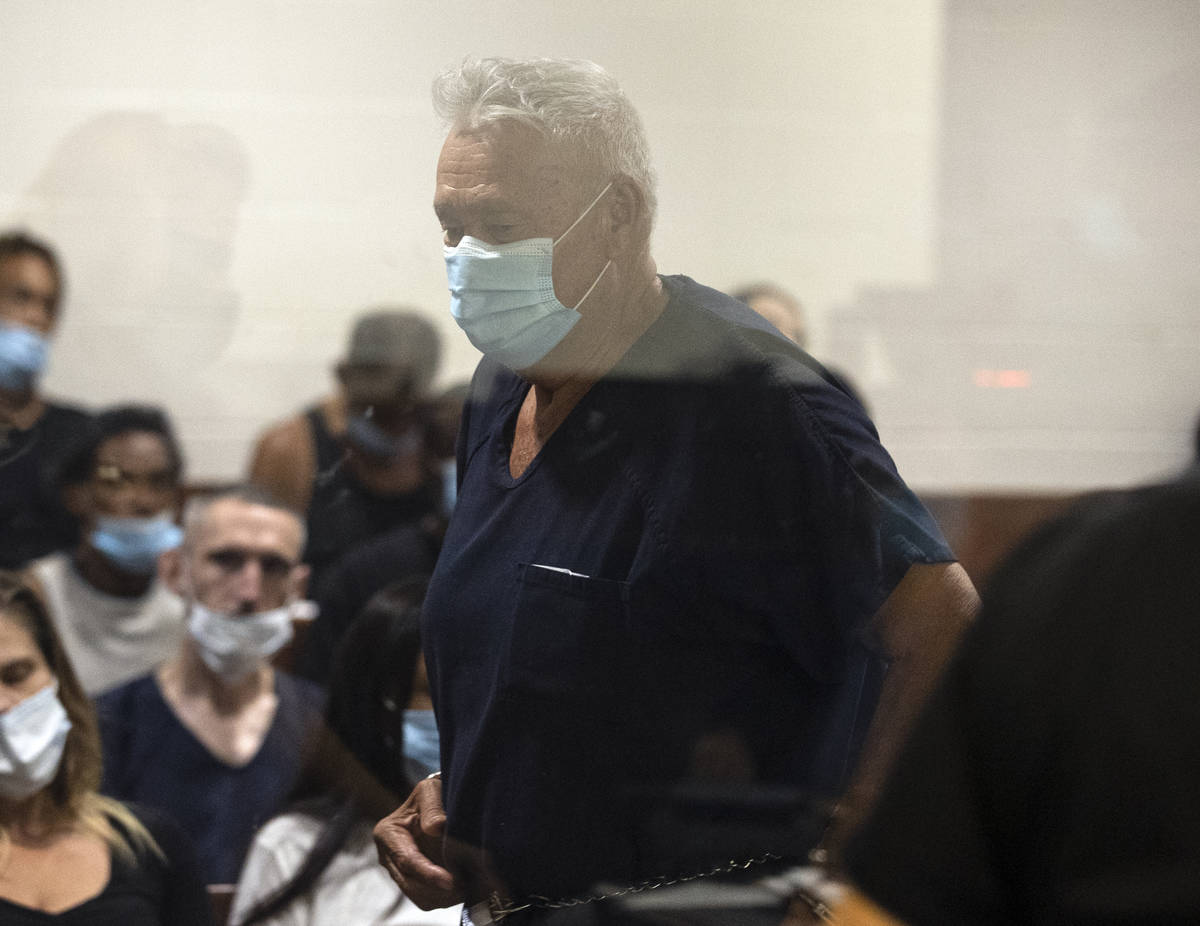 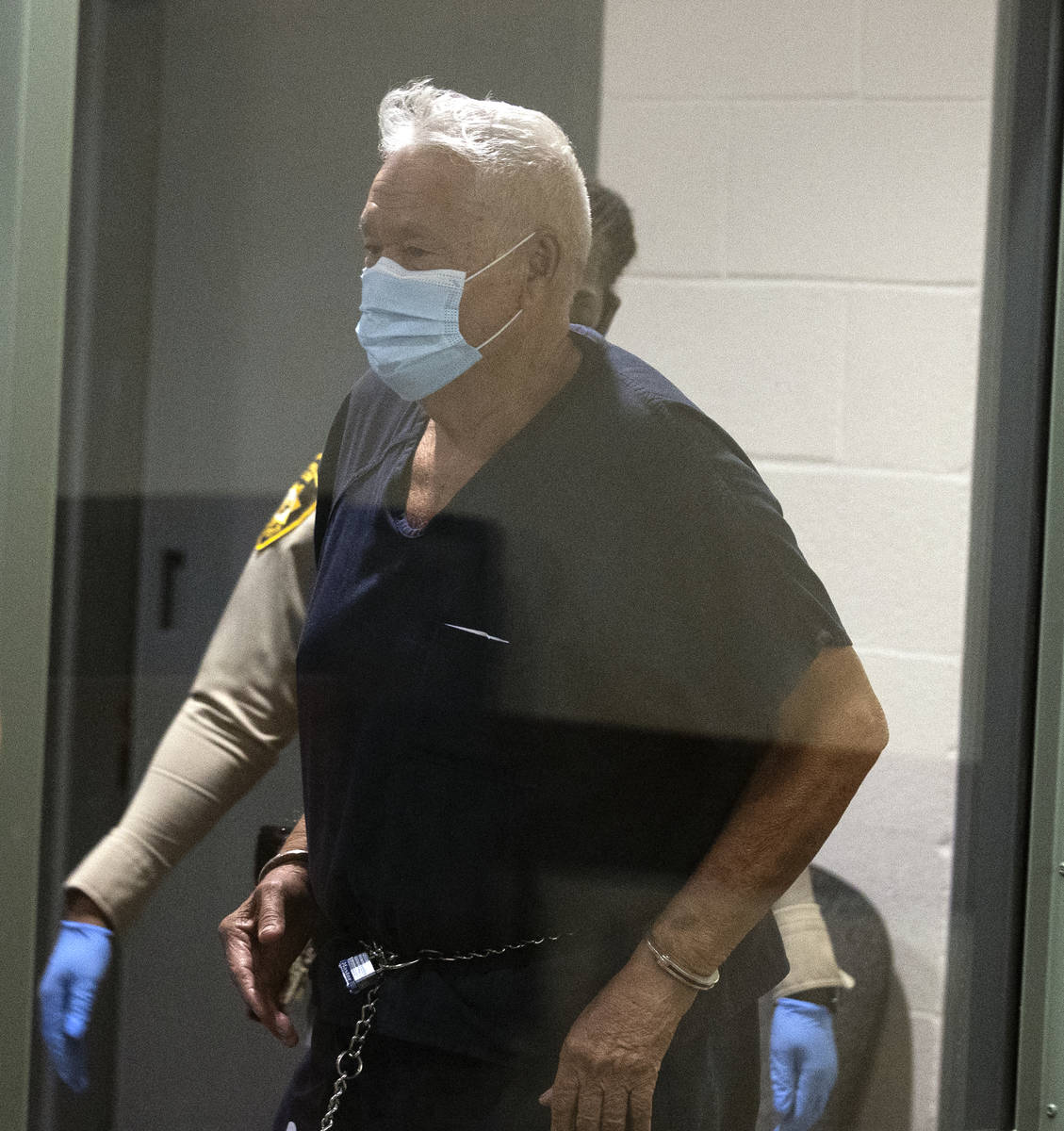 Arnoldo Sanchez, 78, accused of shooting two women to death and left a third person critically injured in a dispute over unpaid rent, led into the courtroom at the Regional Justice Center, on Wednesday, Aug. 11, 2021, in Las Vegas. (Bizuayehu Tesfaye/Las Vegas Review-Journal) @bizutesfaye 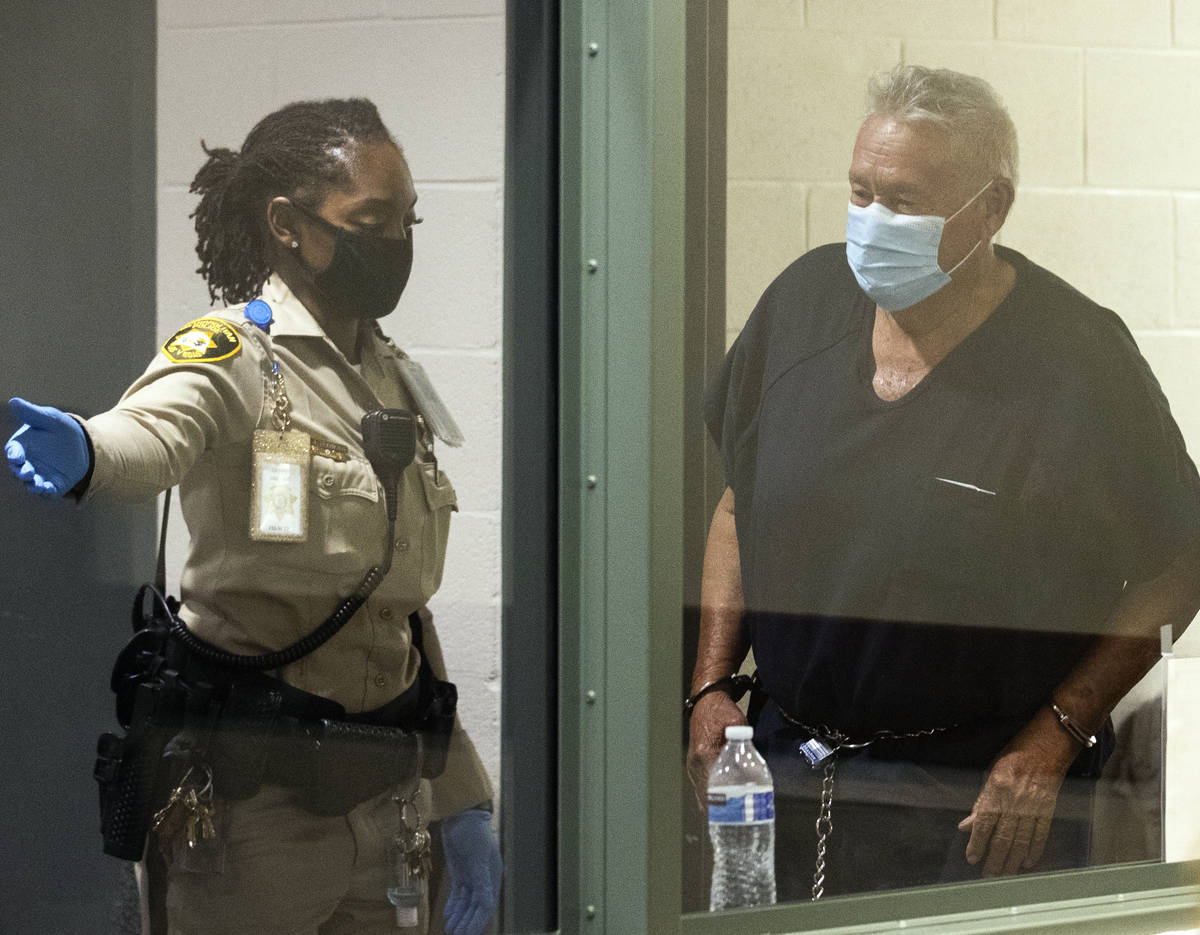 Arnoldo Sanchez, 78, accused of shooting two women to death and left a third person critically injured in a dispute over unpaid rent, led into the courtroom at the Regional Justice Center, on Wednesday, Aug. 11, 2021, in Las Vegas. (Bizuayehu Tesfaye/Las Vegas Review-Journal) @bizutesfaye

A Las Vegas man accused of killing two people and critically injuring a third in a dispute over unpaid rent was laughing and smiling as he shot the victims, police said.

A Metropolitan Police Department arrest report details the allegations against Arnoldo Lozano Sanchez, 78, of Las Vegas, who made an initial appearance Wednesday in Las Vegas Justice Court on two counts of murder and one count of attempted murder. Las Vegas Justice of the Peace Joe Bonaventure denied bail for Sanchez during the brief hearing.

“I don’t know what I’m being accused of,” Sanchez said at one point, speaking through a court interpreter.

Police said Sanchez shot and killed two women and critically injured a man, who was shot nine times, early Tuesday in the shooting at his home in the 200 block of West Chicago Avenue, near South Main Street and Las Vegas Boulevard South.

In the arrest report, police identified Sanchez by his middle name, Lozano, and said a witness, Adria Ortega, told them Sanchez rented out his home to multiple people.

“Several days ago Lozano became angry about the occupants not paying rent,” police wrote in the report. “Ortega suggested Lozano go to court to evict the people living inside his home. Lozano Sanchez told the witness he would ‘handle it his way.’ ”

Police said gunfire broke out in the home at 12:23 a.m. Witness Carlos Lopez said he was staying in a room at Sanchez’s house with his girlfriend, identified only by the name of “Paula.” He said Paula left the room, then moments later he heard gunshots.

“When Lopez looked outside the room he saw Arnoldo Lozano standing in the hallway smiling and laughing,” police said.

A roommate, Seferino Reyes, then opened the door to his room.

“Lozano told Reyes he would not be able to run from him anymore,” police said. “Lozano began to push his way into Reyes’ room. Lopez could hear Reyes yelling ‘No!’ and Reyes’s girlfriend, Dawn, screaming from within the room. Lopez then heard several gunshots and hid behind his door. Lopez then observed Lozano exit the room smiling and laughing.”

Lopez fled the home, then found Paula outside suffering from a gunshot wound. The woman, whose last name has not been released, died at the scene, police said on Tuesday.

“The evidence clearly shows at this early stage that (Sanchez) had a motive, he had the opportunity and he actually did commit two murders as well as an attempted murder with a deadly weapon,” Chief Deputy District Attorney Tim Fattig said at Wednesday’s hearing. “He clearly wasn’t just trying to scare or batter these victims, but to kill them.”

Deputy Public Defender Sarah Hawkins had asked Bonaventure to set bail at $25,000, and said that amount would be “tantamount to no bail for Mr. Sanchez. He tells me he can’t afford even a cent of bail.”

Police wrote in the arrest report that they found a firearm under a bush near Sanchez’s residence. Police attempted to question Sanchez but he invoked his right to an attorney.