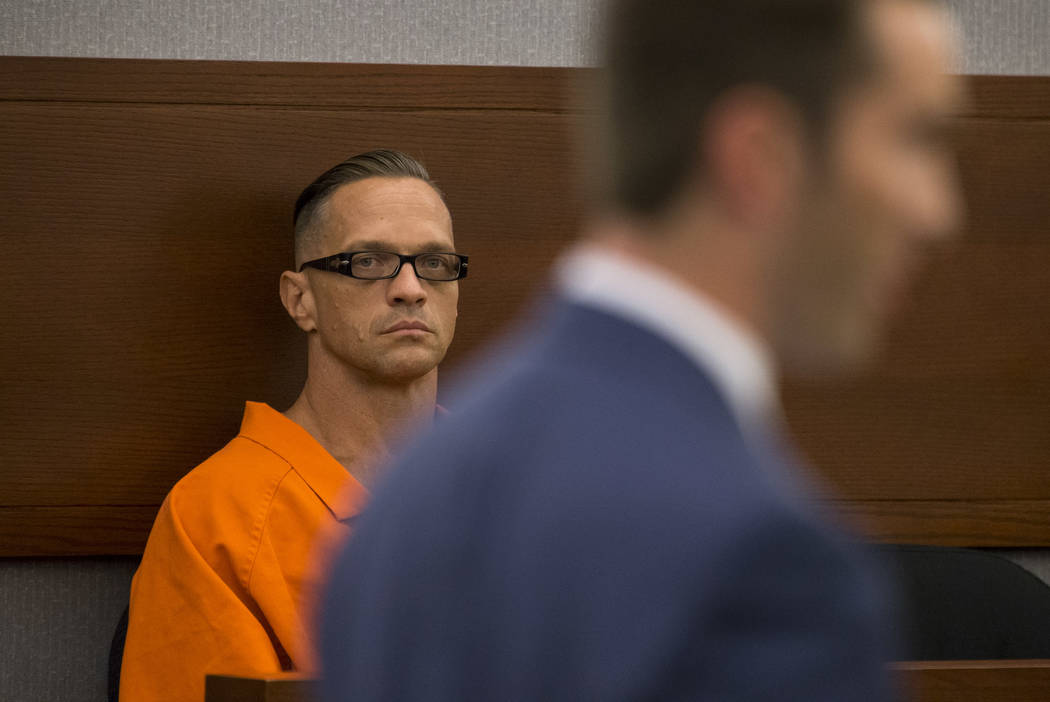 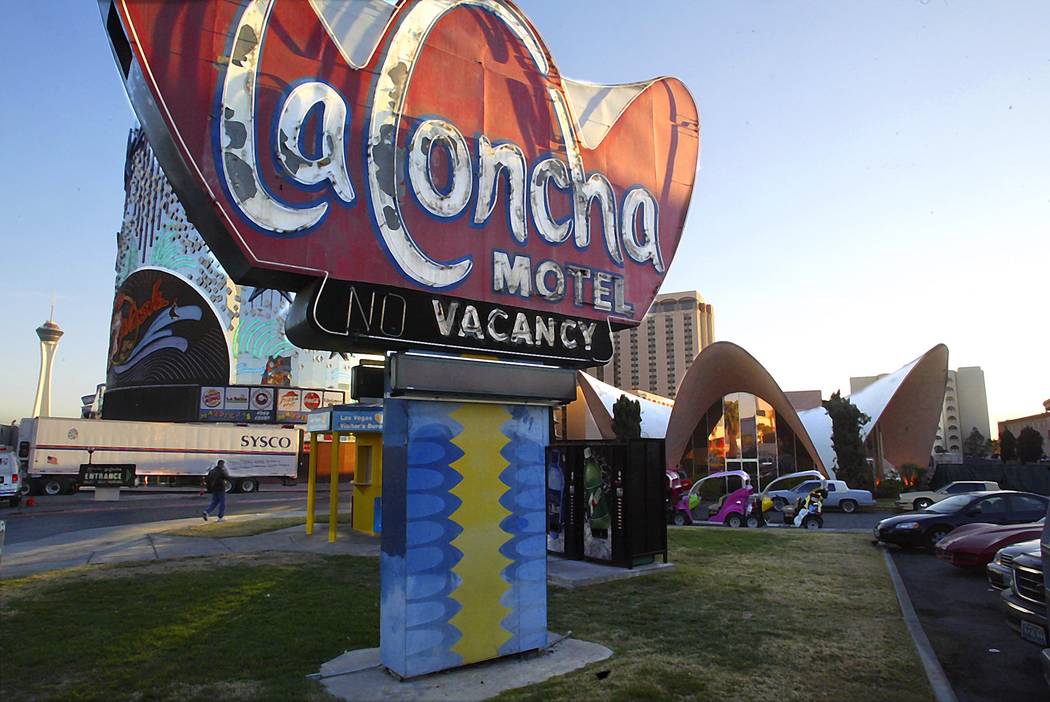 An exterior of the former La Concha Motel is shown in 2003. (RJ File Photo) 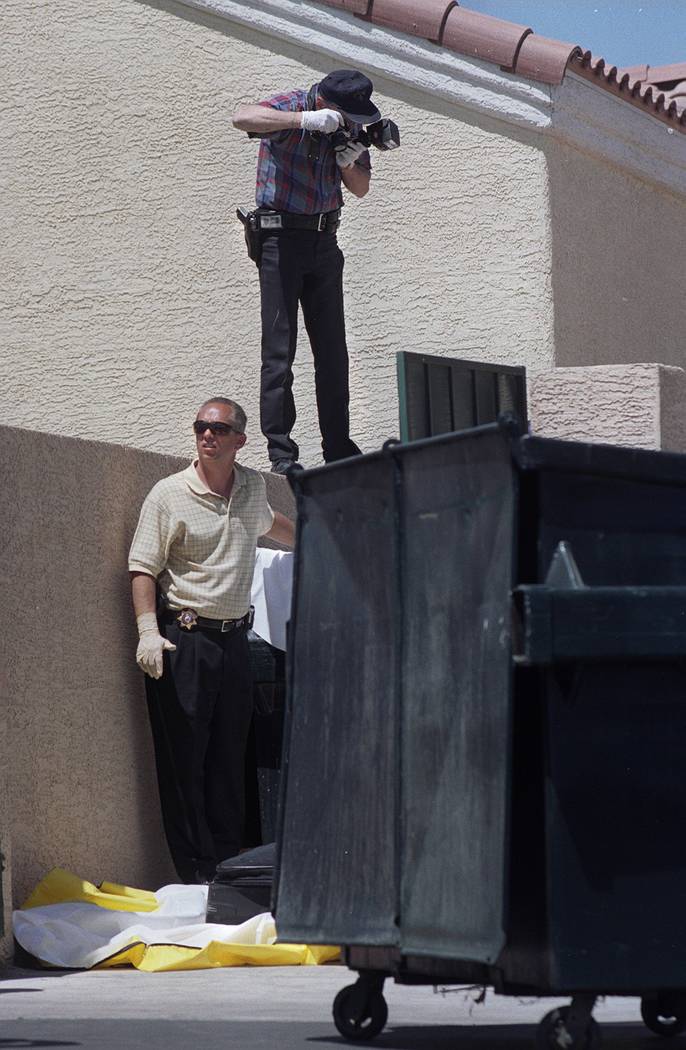 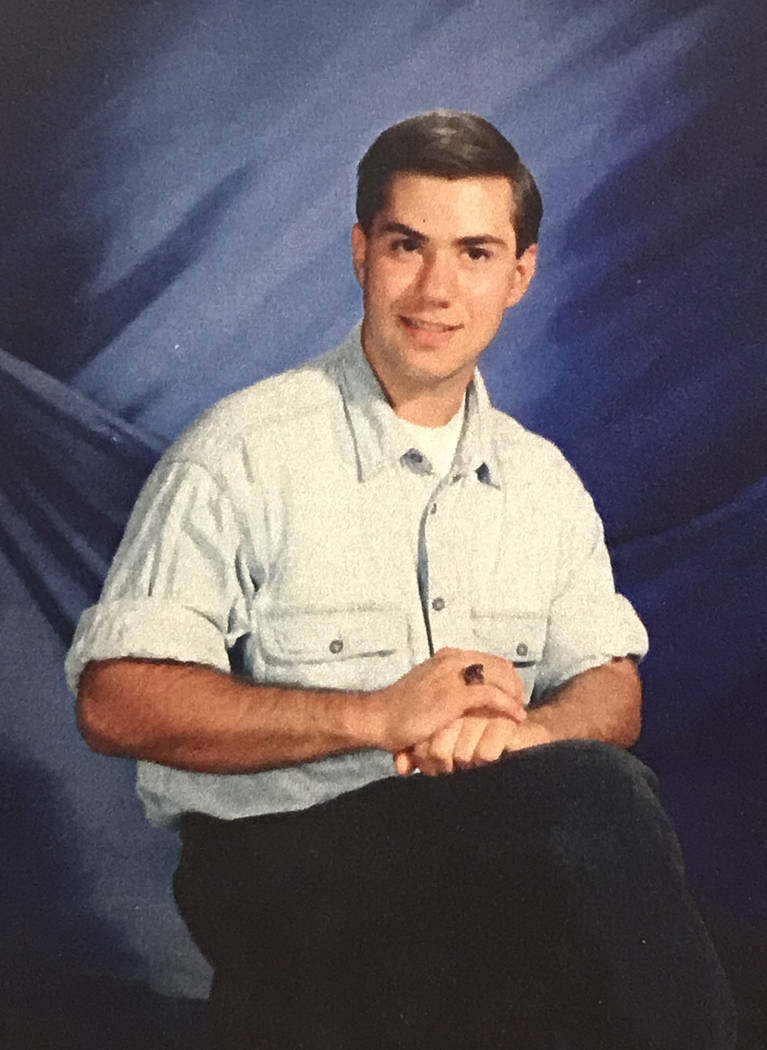 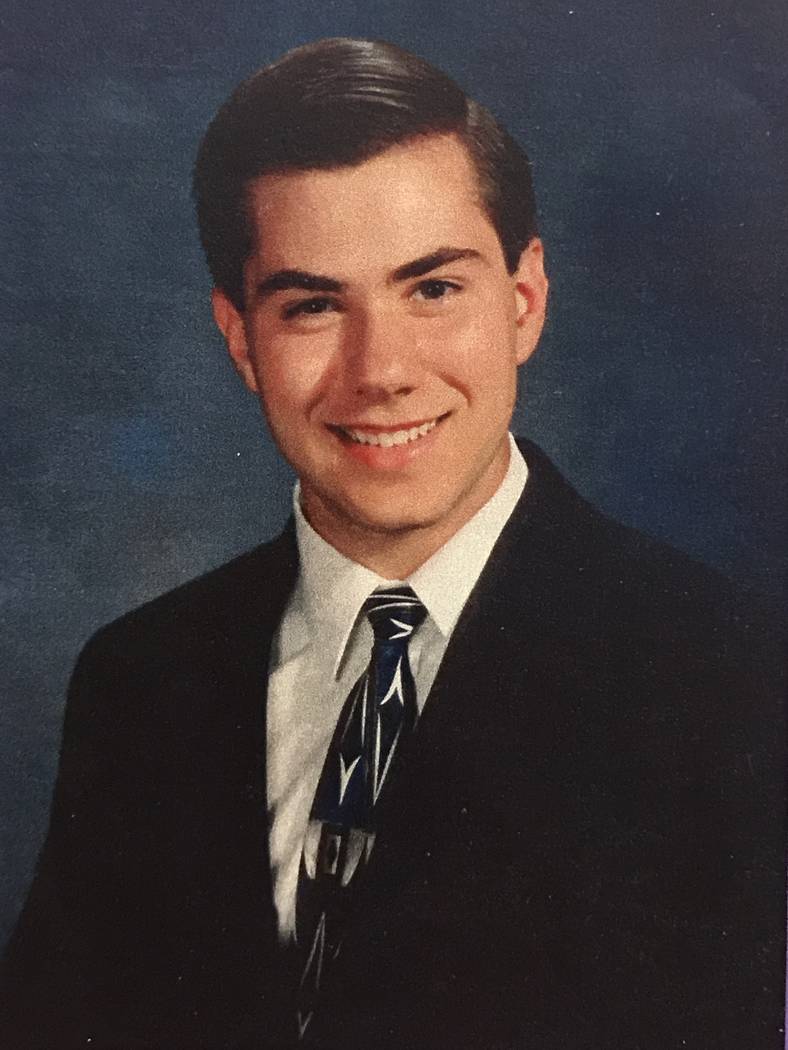 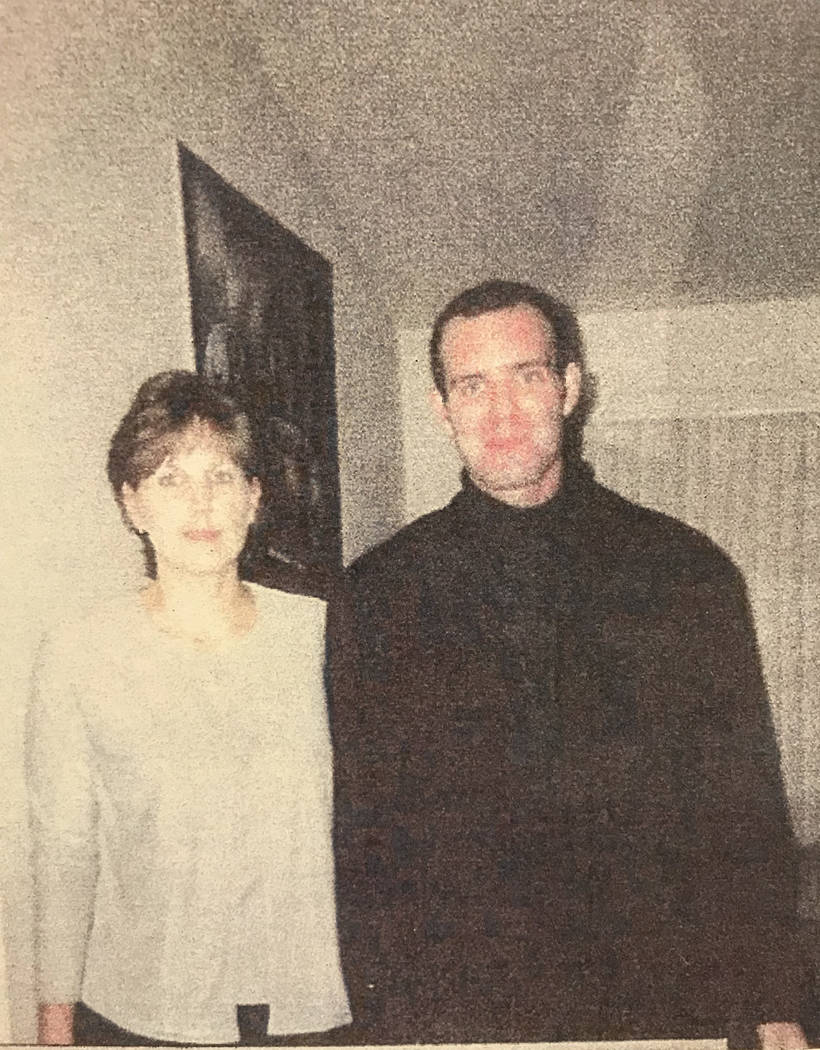 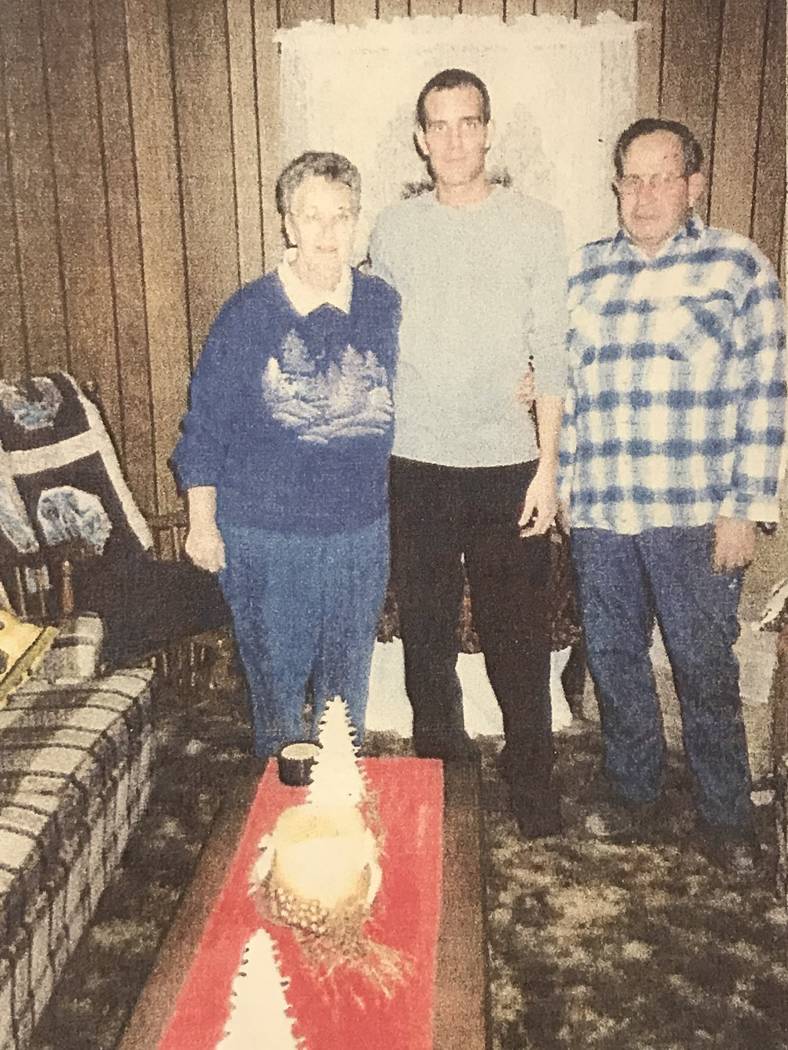 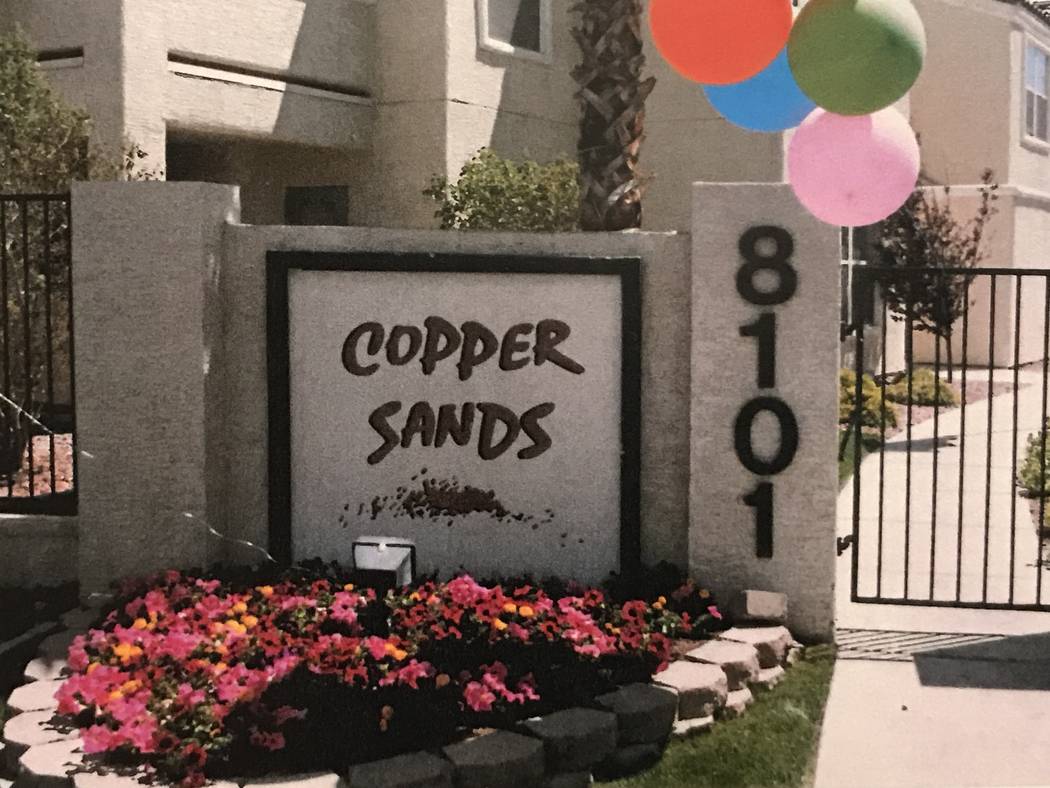 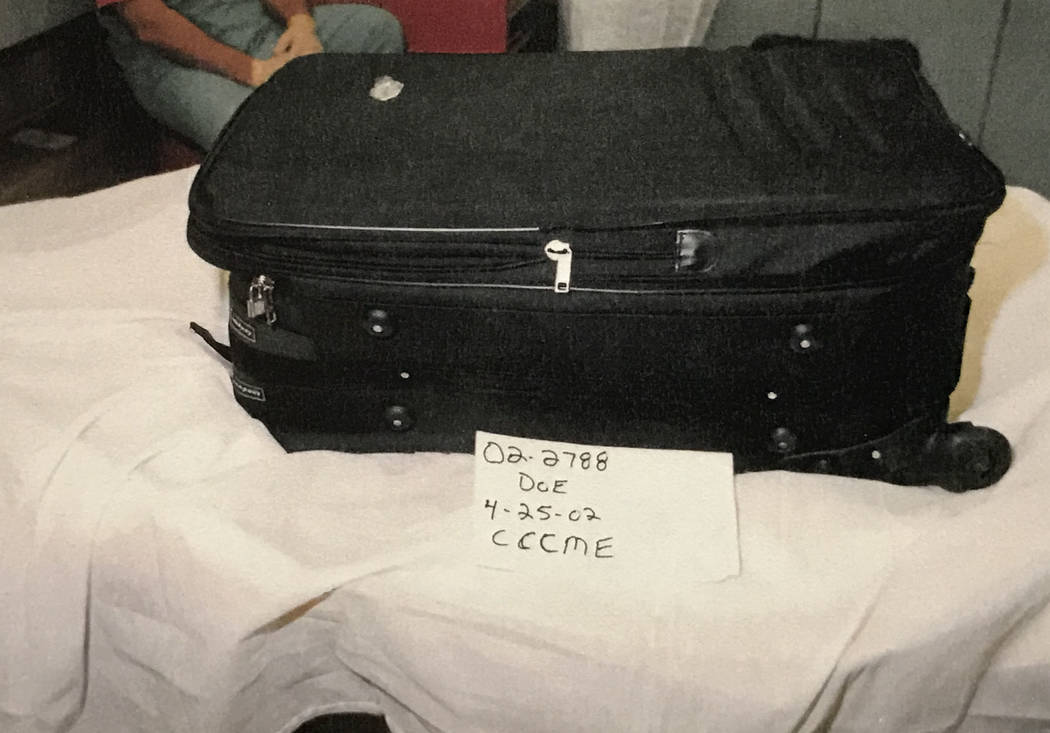 Jeremiah Miller’s torso was found on April 25, 2002, in this suitcase that had been dumped in a trash bin at the Copper Sands apartment complex in the 8100 block of West Flamingo Road. (Clark County District Court) 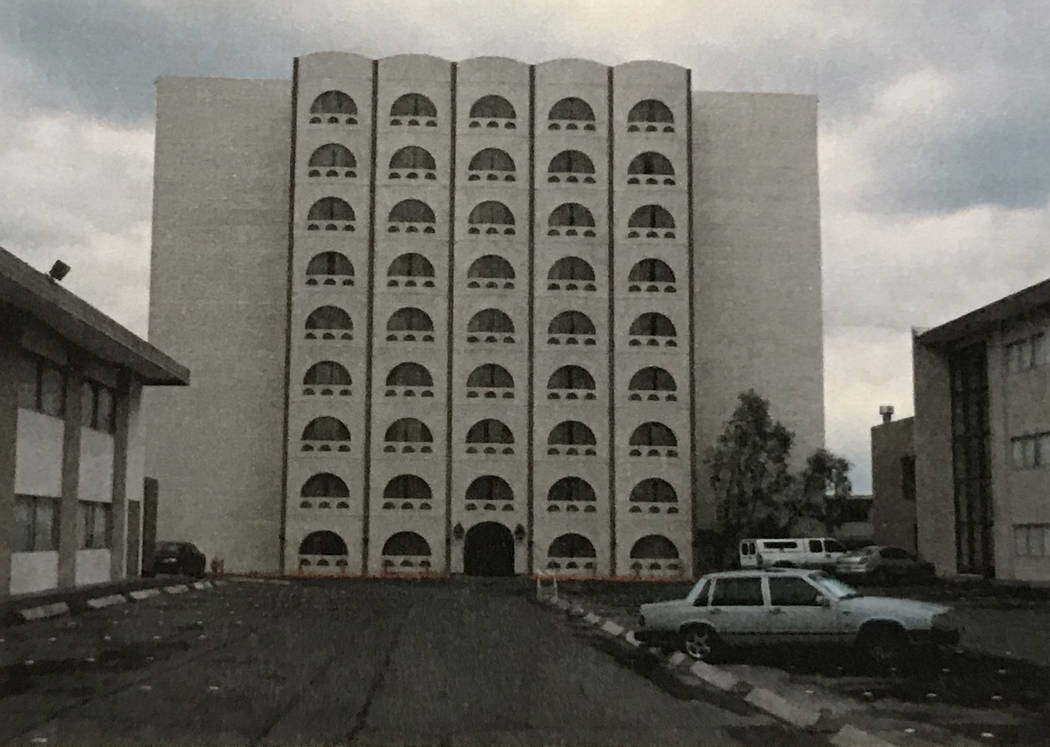 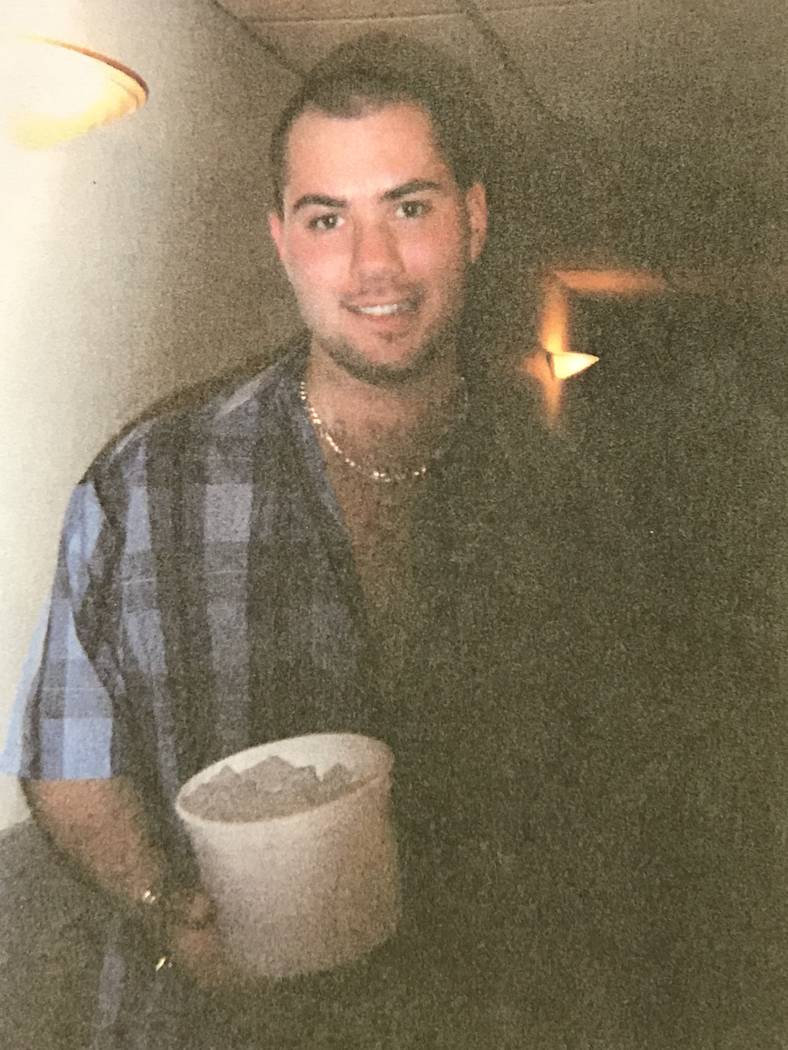 Jeremiah Miller wanted to make methamphetamine. To do that, he needed the help of Scott Dozier, a drug dealer who manufactured the substance.

Miller had the money: $12,000 he borrowed. Dozier had the connection for a crucial meth-making ingredient, ephedrine.

Together, they’d go to Las Vegas to purchase the white pills.

Later that month, April 2002, a maintenance man at the Copper Sands apartment complex found Miller’s mutilated body stuffed in a suitcase at the bottom of a green dumpster. His head, feet and hands were missing.

A jury sentenced Dozier to death in October 2007 for killing Miller. It was his second murder conviction. If he is executed as planned at 8 p.m. Wednesday, he will be the first inmate executed in Nevada since 2006.

Dozier, 47, has steadfastly maintained his desire to die since writing to District Judge Jennifer Togliatti in 2016, when he waived his right to future appeals.

The events surrounding Dozier’s crimes are detailed in court documents.

The day they left for Las Vegas, Dozier parked his station wagon at Miller’s house. He brought Miller and his girlfriend, Brandy Douglas, breakfast, and the three boarded a Southwest Airlines flight in Phoenix.

Dozier traveled under the name Chad Wyatt. With him, he carried a suitcase, Douglas testified. It wasn’t one of the typical roller bags with the pop-up handle. It was older, big, dark.

Nothing appeared out of the ordinary, according to her version of events. Dozier was polite.

Douglas and Miller, a 22-year-old with closely cropped brown hair, had been inseparable for the few months they’d been dating.

Miller, a drug dealer, used methamphetamine in moderation, Douglas said. He was looking to learn how to make it.

In Las Vegas, they stayed at the now-closed La Concha Motel. During their days there, they never pulled up to the main entrance or went through the iconic lobby, famous for its poured concrete clamshell design.

Instead, they climbed through a tear in the chain-link fence to avoid management. Dozier used to do maintenance at the motel and had scored them free adjoining rooms, 656 and 658.

Dozier made phone calls to his contacts. About an hour later, a man and a woman arrived.

“They didn’t have a for-sure way to get these pills, but they were going to try something,” Douglas testified.

The couple wanted to go back to Arizona, but Dozier insisted they stay.

It didn’t. That night, they partied with some of Dozier’s friends, one of whom made Douglas feel uneasy.

Around his friends, Dozier’s demeanor changed. Douglas said he “walked around with his chest-puffed-up kind of attitude.”

The next morning, the couple tried to reach Dozier to arrange the deal. He never called them back.

When they got to Arizona, Dozier called Miller, Douglas testified.

Come back, he said. He had found a new contact.

Miller went the next day, this time without Douglas. He called his girlfriend one time that night, at 11:50 p.m.

“He also made it very clear that he did, the deal did go down. He met somebody, and he purchased the pills,” she testified.

He was going to rent a car and come home in the morning. When he didn’t, Douglas tried calling, to no avail.

She rang Dozier’s adjoining room at La Concha. The phone was picked up, but nobody spoke.

“Oh, he’s not there yet?” Dozier answered.

“What time did he leave there at?” she asked.

“Well, didn’t you talk to him last night?” Dozier asked.

After Miller got off the phone with her, he went on a walk and didn’t come back, Dozier told her.

That didn’t sound typical of him, Douglas thought. Did he go on a walk with the pills, too?

“No,” Dozier said. The deal never went down. Miller left and never came back.

That week in April, Barbra Meagher, a former girlfriend of Dozier’s, went to visit him at La Concha.

There, they smoked meth and had sex. She recalled seeing a big guy with dark hair who also used the drugs with them.

She never got his name.

The next day, Meagher went up to the room unannounced. Dozier seemed nervous, she testified. He checked the windows when she arrived and asked if she was alone.

There was the suitcase, sitting in between the adjoining rooms.

“He insinuated that he had shot somebody,” she said in court. She remembered him holding his silver handgun earlier that week. “And I said, ‘What are you talking about?’”

He kicked the bulky, zipped suitcase.

Forty years spent working in the trash business compelled Edward Miller, the maintenance man at the Copper Sands on West Flamingo Road, to peek inside the trash bin on the south end of the apartment complex.

“You get in the habit; you always look in dumpsters,” he testified.

When he noticed a suitcase taking up an inordinate amount of space on April 25, 2002, the maintenance worker said he tried to move it, but it was too heavy. He called for a colleague to help.

“Unzipping the suitcase, I seen a black plastic bag and a white, bloody towel,” he said. “Then, I said, ‘We’d better call Metro.’”

The extremities were removed at the joint, with precise marking consistent with a blade or a knife, a medical examiner said.

“This was a fairly clean dissection, clean in the sense that there wasn’t a lot of hemorrhage,” Rexene Worrell, the medical examiner, testified during the murder trial. “It wasn’t a hacking, disorganized dissection.”

Miller had to have been killed before he was cut up, she said. There was no evidence of bleeding. The blood in his body might have drained from a bullet wound.

“The dismemberment would have taken a lot of effort,” she said. “The victim was a fairly large man, and the weight alone in lifting and manipulating his extremities would take strength.”

Tattooed on the right side of his body was a circle with two dragons. On the left, two theatrical masks with a banner underneath that said, “Always Remember.”

That’s how his parents were able to identify him.

After Dozier’s arrest for the Miller murder, an informant led police to the shallow grave of 26-year-old Jasen Greene in the Arizona desert.

Greene and Dozier had lived together, and Dozier was on probation for manufacturing meth in Las Vegas at the time of the murder, court documents show.

According to authorities, Dozier shot Greene in the back of the head with a .22-caliber rifle when he threatened to expose his meth business.

Dozier wrapped the victim’s body in plastic, placed it in a black tole box and fractured both legs to make them fit. He was found guilty in 2005 of second-degree murder for killing Greene and was sentenced to 22 years in prison.

For the first-degree murder conviction in Las Vegas, Dozier faced the death penalty. Authorities pinned him down as a suspect after years of interviewing his friends.

One said he saw a body holding a head in the bathtub of Dozier’s room at La Concha. Another said Dozier told him he had shot Miller in the head. The third, Meagher, said she had visited Dozier during his Las Vegas stay and he had a body in a suitcase in a hotel room.

Throughout the four-week trial, defense attorneys tried to convince the jury that the man who had lent the $12,000 to Miller, an elderly Phoenix drug mogul known only as Darryl or “Grandpa,” had more motive to kill Miller.

They described Miller as a drug dealer who had begun to use his own product, had been cut off by his drug source and owed money to shady sources.

They emphasized that Las Vegas police never found any blood at La Concha during the investigation. The motel since has been torn down, and its shell-shaped lobby was moved to the Neon Museum.

“When Jeremiah was alive, his body contained 6 liters of blood,” Deputy Special Public Defender Clark Patrick said at trial. “At autopsy there was nothing left. That’s eight wine bottles full of blood. That’s 17 cans of soda full of blood. Where is it?”

Prosecutor Sam Bateman said the witnesses all described Dozier on different floors and rooms of the motel, indicating he moved around.

“To separate the head, the arms and the legs and to dump them in different areas, wouldn’t that same person put the same care and attention into cleaning?” he argued.

The rest of Miller’s body has never been found.

During the trial’s penalty phase, the jury considered the mitigating circumstances that weighed in favor of sparing Dozier’s life and checked off the ones that had been established.

Dozier was sexually molested as a child. He had a relationship with his parents, his son, his grandparents, his brother and his sister. He had been honorably discharged from the Army.

They wrote in some of their own: antisocial personality disorder with narcissistic traits, learned deception at an early age, does well in a structured environment, lack of empathy, possible abandonment issues, focused on self not others, uses others for gain.

But the testimony of his mother, father, psychiatrist and others did not outweigh the aggravating factors: The murder was committed while Dozier was on probation, he had been convicted of another murder prior to the penalty hearing in the Las Vegas case, and the Las Vegas murder involved mutilation of the victim.