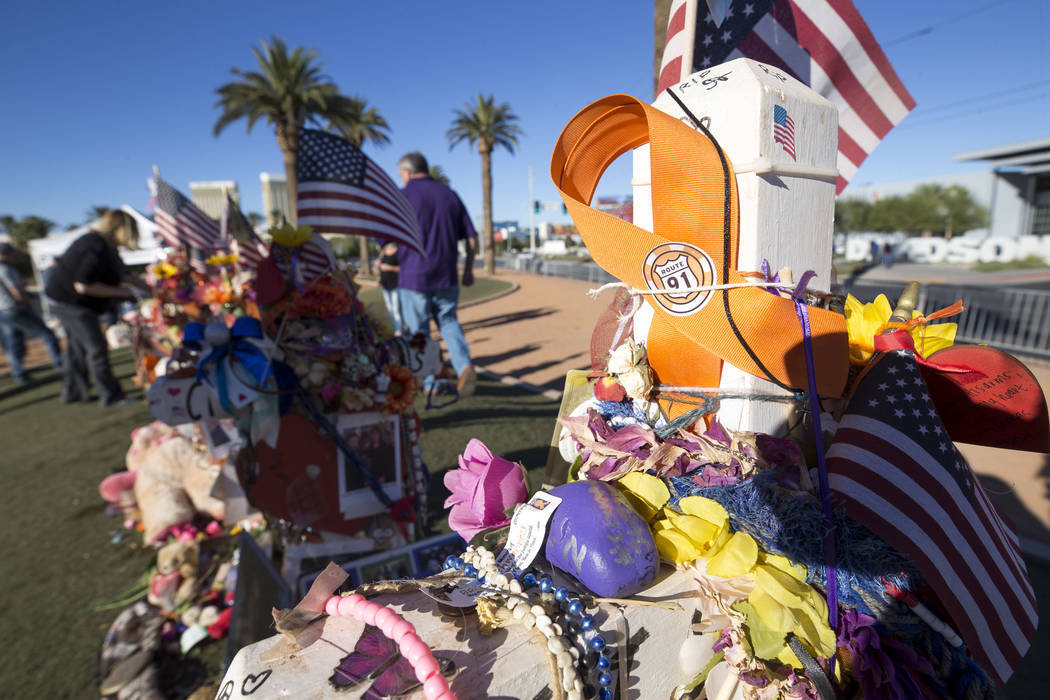 The crosses and mementos left behind by visitors at a memorial for Route 91 Harvest shooting victims at the Welcome to Fabulous Las Vegas sign, Thursday, Nov. 9, 2017. (Richard Brian/Las Vegas Review-Journal) @vegasphotograph

The Las Vegas Victims’ Fund is slated to begin distributing payments to eligible victims next month — but fund officials have not yet said how much money has been collected.

The Las Vegas Victims’ Fund was established in October to oversee the consolidation and distribution of donations following the Oct. 1 shooting at the Route 91 Harvest country music festival that left 58 people dead and hundreds of others injured.

Scott Nielson, chairman of the Las Vegas Victims’ Fund committee, previously told the Review-Journal that would-be donors were encouraged to give money by Jan 31.

On Monday, Nielson said the fund is “continuing its fundraising efforts until the end of the month.”

“We don’t want to provide a dollar figure for the total amount contributed until our efforts are concluded and the contributions have been deposited in the LVVF bank account. Providing a dollar figure that is an inaccurate estimate would be a disservice to the families and survivors of 1 October. We look forward to providing the total amount available for distribution in the near future,” Nielson said.

Nielson said Dec. 15 that the fund had more than $22 million. He has not given any updated figures since.

Money in the Las Vegas Victim’s Fund will go to people in three categories of descending priority:

1. The families of those who were killed in the shooting and people who sustained permanent brain damage and/or permanent paralysis resulting in continuous home medical assistance.

2. People who were physically injured as a result of the shooting and first admitted to a hospital between Oct. 1 and Oct. 10 for at least one night through Dec. 15. The amount for the injured will be allocated by the number of cumulative overnight hospital stays.