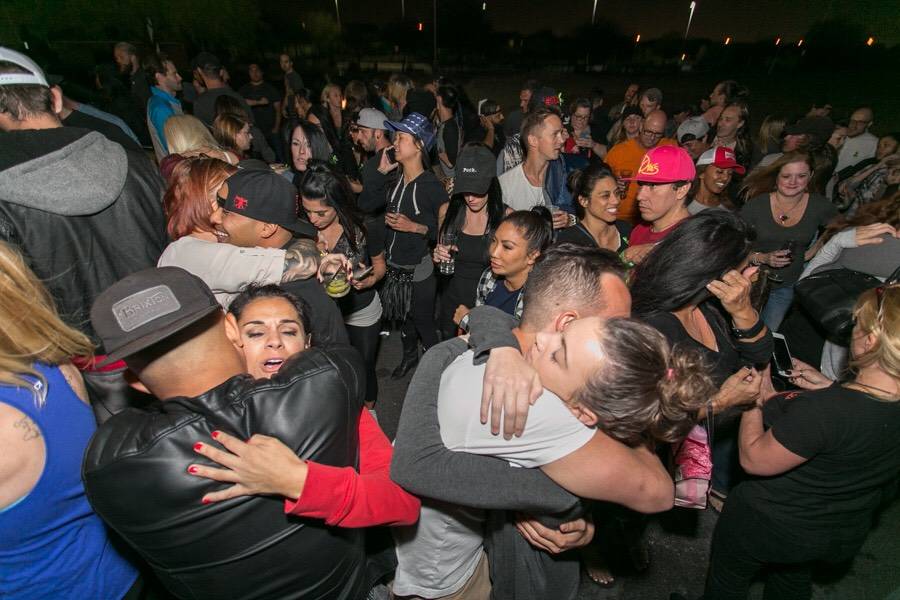 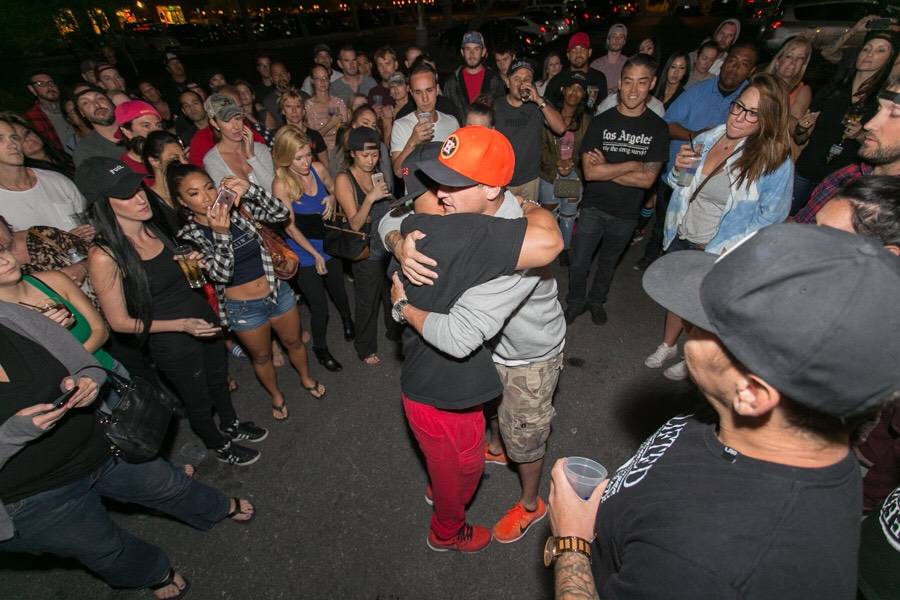 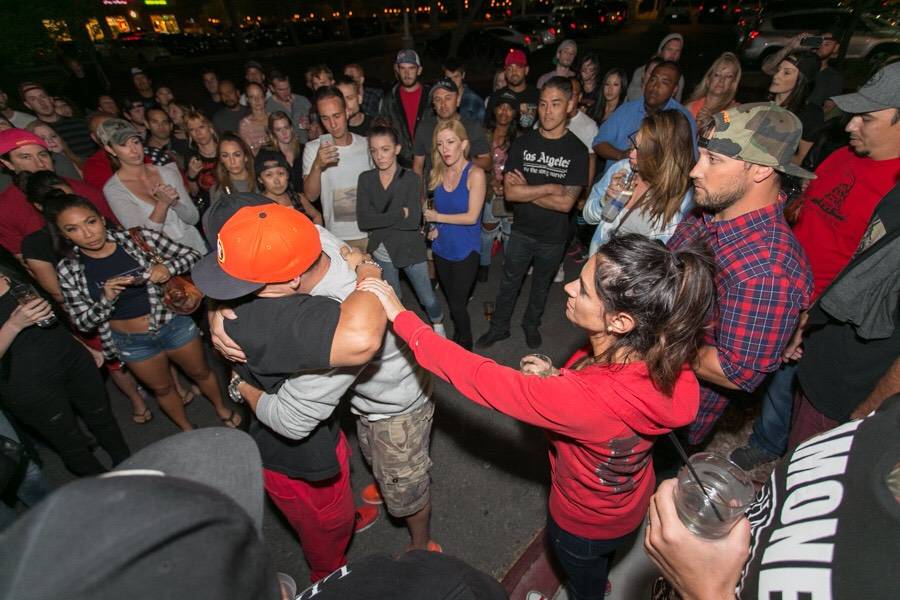 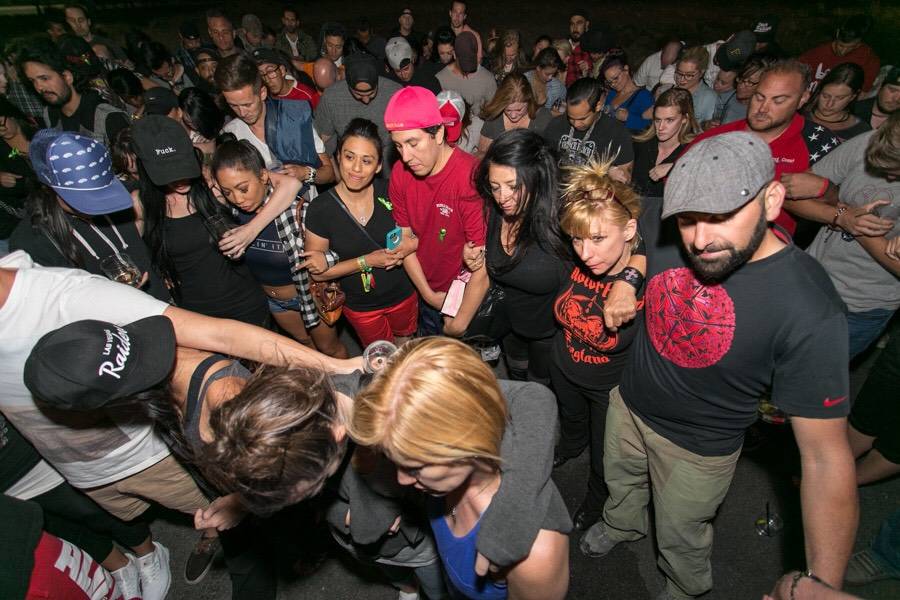 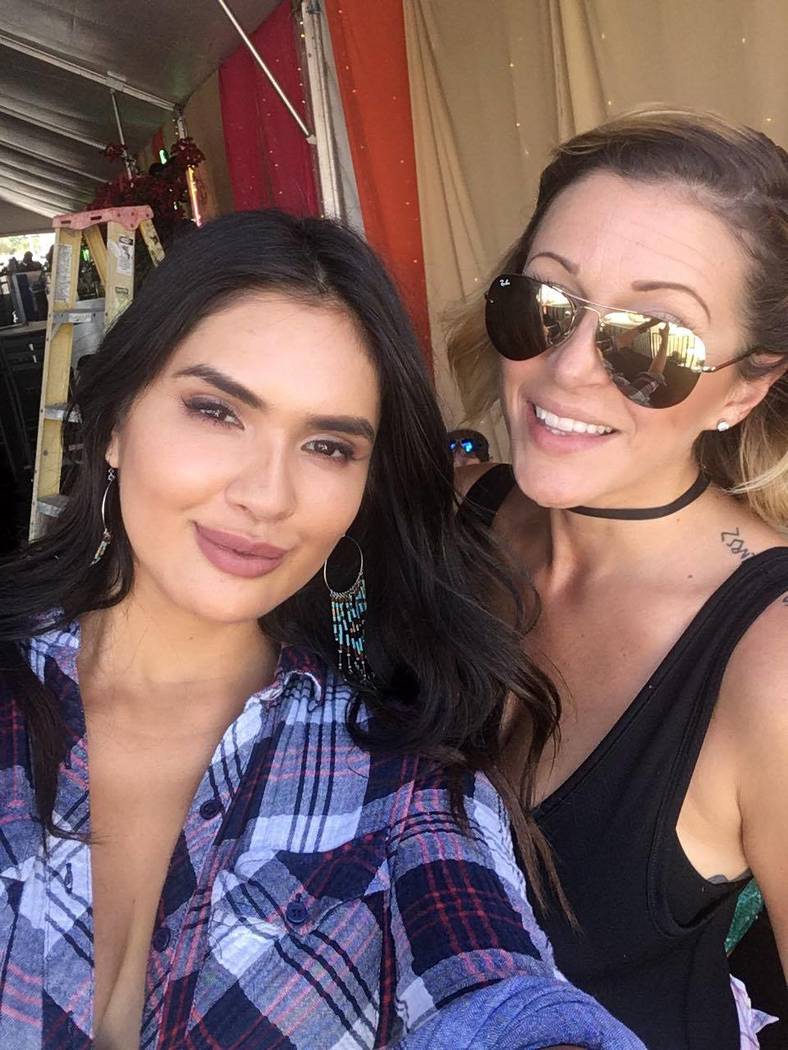 Kayla Perez, left, and Whitney Del Rosso on Sept. 29, 2017, the first day of the Route 91 Harvest music festival targeted in the Las Vegas Strip shooting. Perez and Del Rosso worked the same bar inside the venue they would later flee while holding hands. (Whitney Del Rosso) 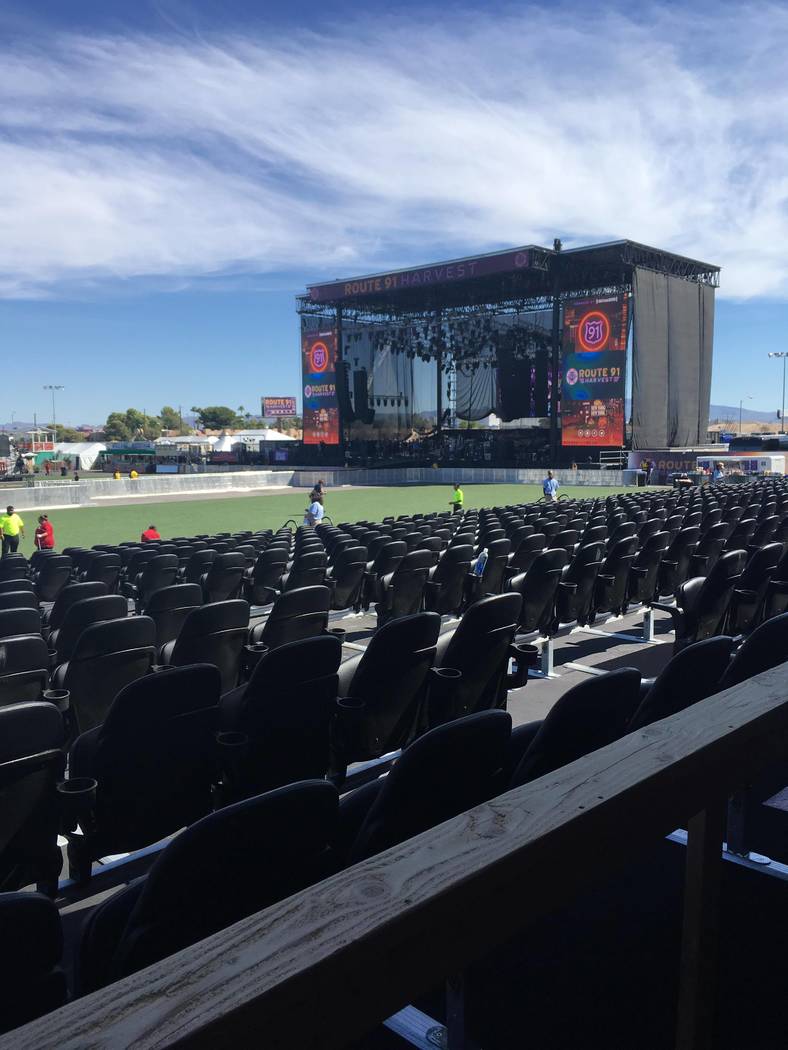 An empty stage on the first day of the Route 91 Harvest music festival targeted in the Las Vegas Strip shooting. The 240 bartenders, bartender assistants and servers who worked the event have been helping each navigate the shooting's aftermath. (Whitney Del Rosso)

A month and a week after the Las Vegas shooting, Whitney Del Rosso brought a friend from out of town to meet a family born from tragedy.

At a Henderson barbecue restaurant, Del Rosso introduced her friend to fellow bartenders, assistants and servers who worked the Route 91 Harvest music festival targeted in the Oct. 1 shooting.

Surrounded by people with whom weeks earlier she fled gunfire, she now smiled. She laughed. She danced.

The Big B’s Barbecue event was one of a handful organized since the shooting to bring together the 240 people who worked the bars on a weekend that promised alcohol and country music and instead left 58 dead and more than 500 injured.

Events organizer Bryan Caudill also managed the bartenders of Route 91. He said more than 100 of the workers regularly attend the events.

In person and in online forums, the Route 91 workers exchange information on psychologists, yoga times and filling out paperwork for public resources.

They share symptoms of post-traumatic stress experienced since the shooting, detail nightmares and advise each other on overcoming sleepless nights.

Some have decided not to attend events and to stay away from online posts from other survivors to move on from the shooting, said Caudill, 33. He tries to stay in touch with them through text messages and phone calls.

The bartenders have brought food to those who have stayed inside or who have struggled to keep work hours, either due to trauma or the Las Vegas Valley’s regular quiet period until New Year’s.

Some have intervened when other bartenders tried to harm themselves, Caudill said.

Some have sought assistance through the justice system. A batch of lawsuits filed last week against defendants including Mandalay Bay owner MGM Resorts International includes workers Luca Iclodean and Heather Gooze as plaintiffs. Worker Tasaneeporn Upright is part of a separate lawsuit against Slide Fire Solutions, maker of a gun attachment used to increase a weapon’s rate of fire.

Caudill hasn’t worked since the shooting. He said he’s spent his time helping out workers and looking for a doctor for his shoulder, injured while throwing people over a fence bordering the concert venue.

The state’s Victims of Crime Program only covers individual claims up to $35,000. The fund, which has about $12 million, is used to pay for a variety of services, including medical bills, funerals and counseling.

Officials with the program have asked survivors to contact them with questions about the confusion over who qualifies and what to expect in payment.

As an injured staffer, Caudill got $1,000 from the Red Cross. He has yet to receive $700 he was told the state program would send him. The FBI seized cash and tips left behind at the festival, but Caudill doesn’t know if or how that money will get disbursed.

For working the festival, he received $1,500 and worked about 100 hours that week.

He’s also set up an online fund to try to raise money for the bartenders.

A work in progress

The events for the bartenders have included three-fourths of the workers who came to South Point to pet therapy dogs and eat donated food and more than 100 who came to Sand Dollar for an open bar. About 200 attended an event at Born and Raised.

The post-traumatic stress he sees in his workers reminds him of what he saw in the Air Force, where he served for three years until he was discharged because of poor vision.

“This is worse because it’s civilians,” he said. “It’s going to take a lot of time. This eats at people.”

For Del Rosso, she realized the shooting had affected her mental and physical health while returning home from an event she worked a week after the shooting.

She panicked while driving home and pulled over. She felt as if she wanted to crawl out of her skin. She’d calm down after five hours and fall asleep in the shower.

But now, she’s returning to the yoga and gym regiment she maintained before Oct. 1. She excuses herself less often from loud, enclosed spaces.

She’s tended bar at events like a craft beer and music festival in Southern California. She checked all the exits. She noted where to find the police and paramedics. The festival went perfectly.

On Nov. 8, she almost decided not to go into the bartenders event at Big B’s Barbecue, a restaurant whose off-site business shut down until it got its portable smoker back from the Route 91 venue. She’d seen a TV reporter and had panicked before at the idea of reporters hounding her for information.

She walked into the restaurant and joined her friends.

“Everything has been a work in progress,” she said.