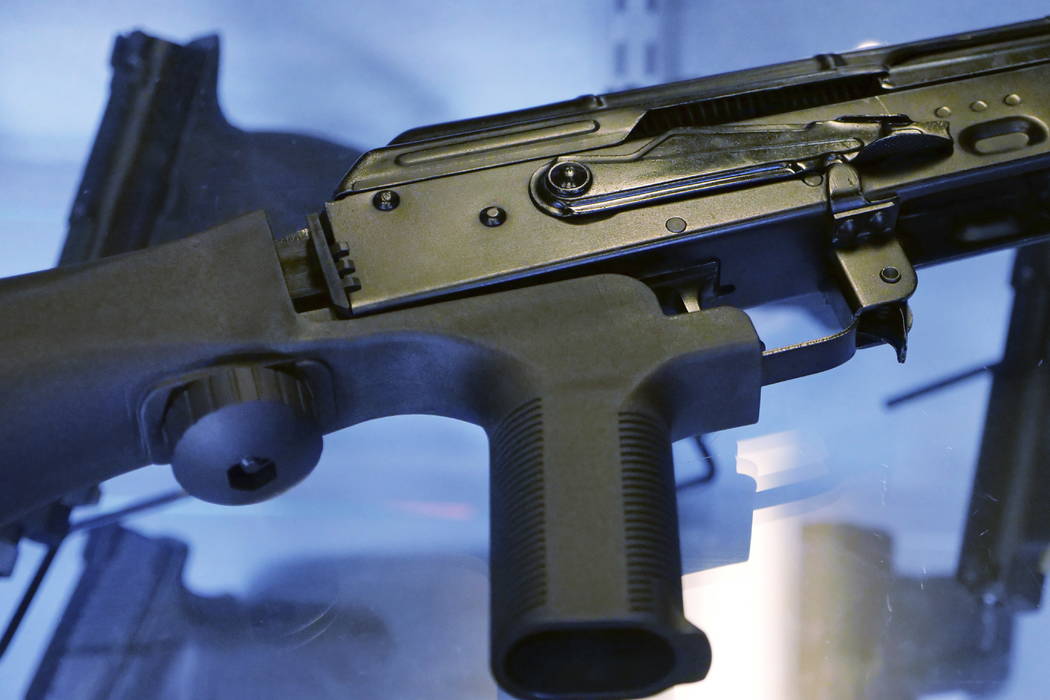 A device called a bump stock is attached to a semi-automatic rifle on Oct. 4, 2017, at the Gun Vault store and shooting range in South Jordan, Utah. (Rick Bowmer/AP)

A Las Vegas law firm has filed a class-action lawsuit against a bump stock manufacturer on behalf of all those “who tragically suffered emotional distress” as a result of the mass shooting at the Route 91 Harvest festival.

Gunman Stephen Paddock fired into the festival crowd the night of Oct. 1, killing 58 concertgoers and injuring hundreds of others. Authorities have said he used an attachment on semi-automatic weapons known as a “bump stock” to increase the firing capacity of his rifles.

Representatives of Slide Fire Solutions could not be reached for comment Monday, and its website stated that new orders have been “temporarily suspended.”

Claims in the 30-page suit include negligence, infliction of emotional distress, products liability and public nuisance.

“This horrific assault did not occur, could not occur, and would not have occurred with a conventional handgun, rifle or shotgun, of the sort used by law-abiding responsible gun owners for hunting or self-defense,” the complaint alleges. “The damage caused to plaintiffs resulted from the military-style arsenal that defendants manufactured, marketed, and sold to the general public, without any reasonable measures or safeguards, and which the killer foreseeably used to such horrific results.”

The suit seeks unspecified damages and notes that the company made more than $10 million in bump stock sales during its first year. Based in Texas, Slide Fire sold upward of 35,000 units in 2011.

“There is no one that does what we do,” inventor Jeremiah Cottle, an Air Force veteran, states in a video on the company’s website. “It’s always about doing something and pushing it to the edge, giving the people what they’re excited about.”

The complaint alleges that there is no indication that Slide Fire marketed toward “persons whose hands have limited mobility,” as the company suggested. The suit includes an image of a weapon with the caption “YOUR RIFLE IS HUNGRY, FEED IT” and quotes Cottle as saying the product was geared toward “people like me, (who) love full auto.”

The lawsuit states that Slide Fire advertised its product as “an inexpensive device to circumvent federal law in obtaining fully automatic weapons” and “marketed its bump stock as a military-grade accessory for civilians.”

The company did not take measures to restrict sales to those with limited use of their hands, according to the suit.

“They should have known that if an able person sought a bump stock, it was foreseeable that it would be misused,” the complaint continued.