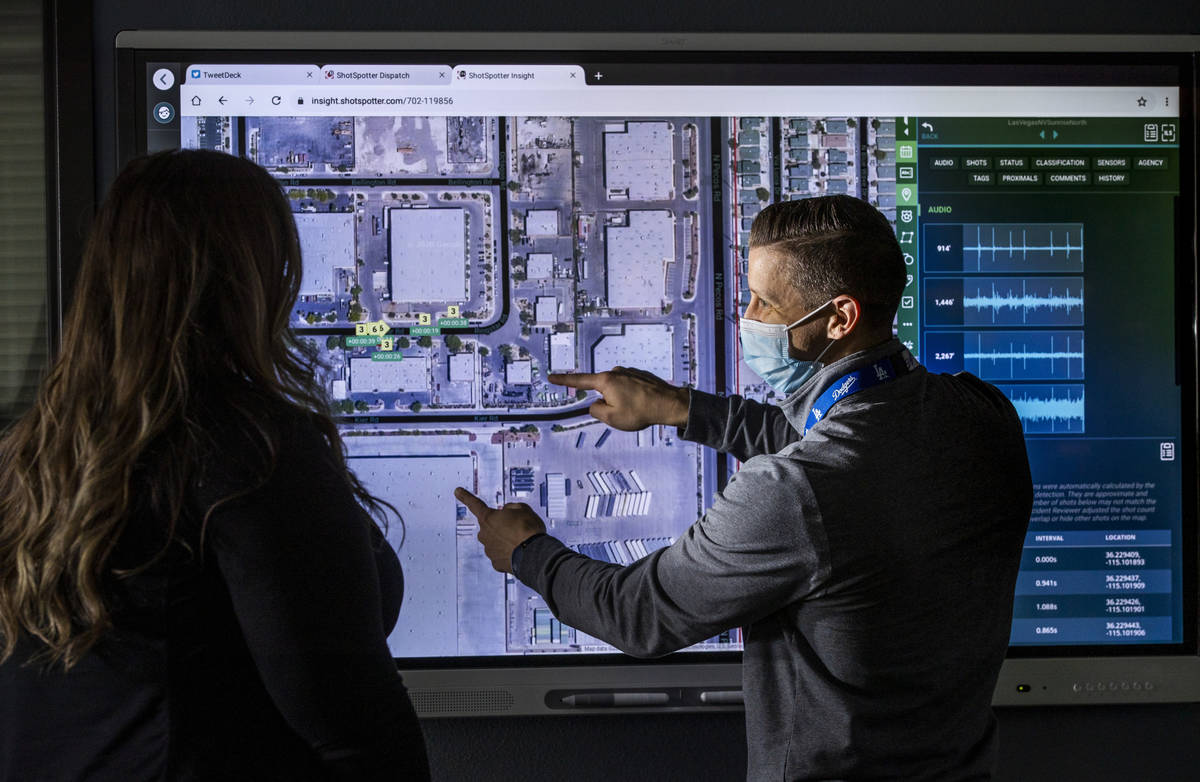 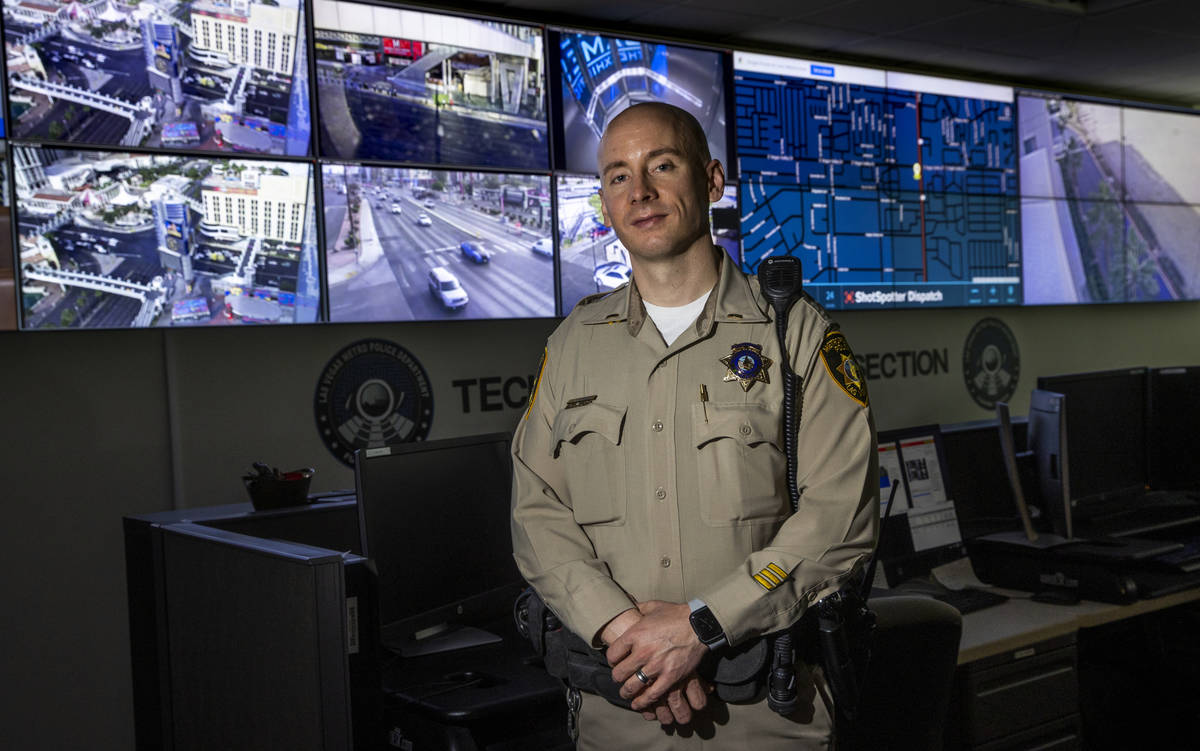 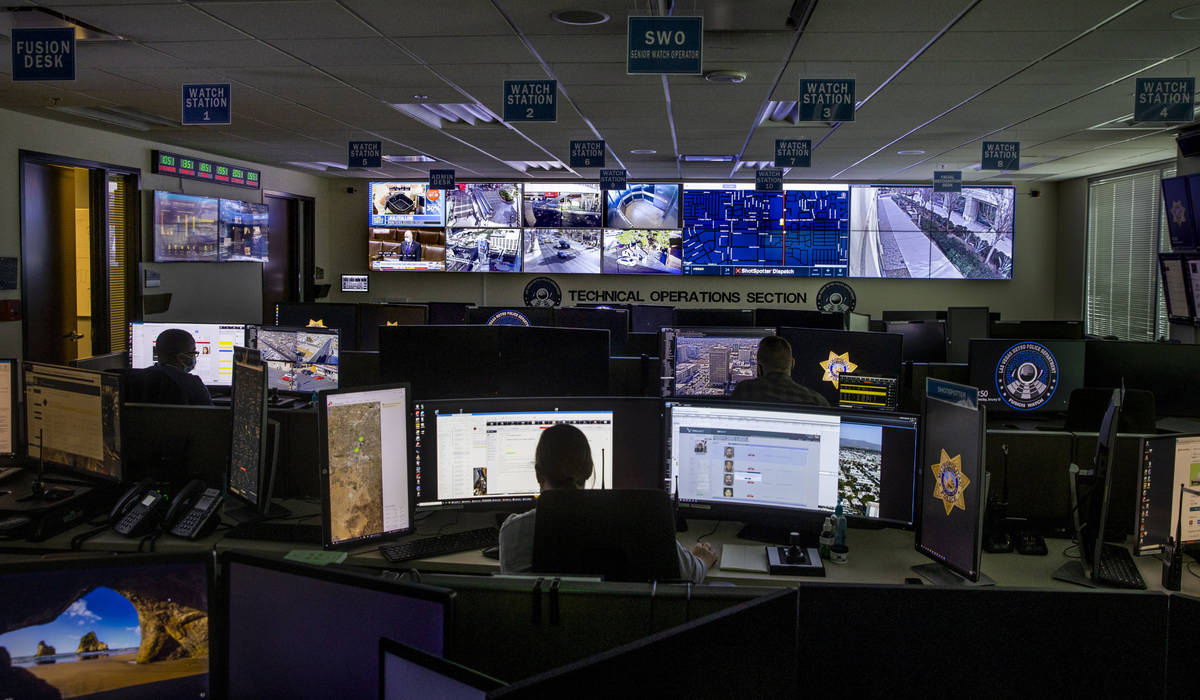 A ShotSpotter Dispatch program is in operation within the Fusion Watch department at the Las Vegas Metropolitan Police Headquarters on Wednesday, Jan. 13, 2021, in Las Vegas. (L.E. Baskow/Las Vegas Review-Journal) @Left_Eye_Images 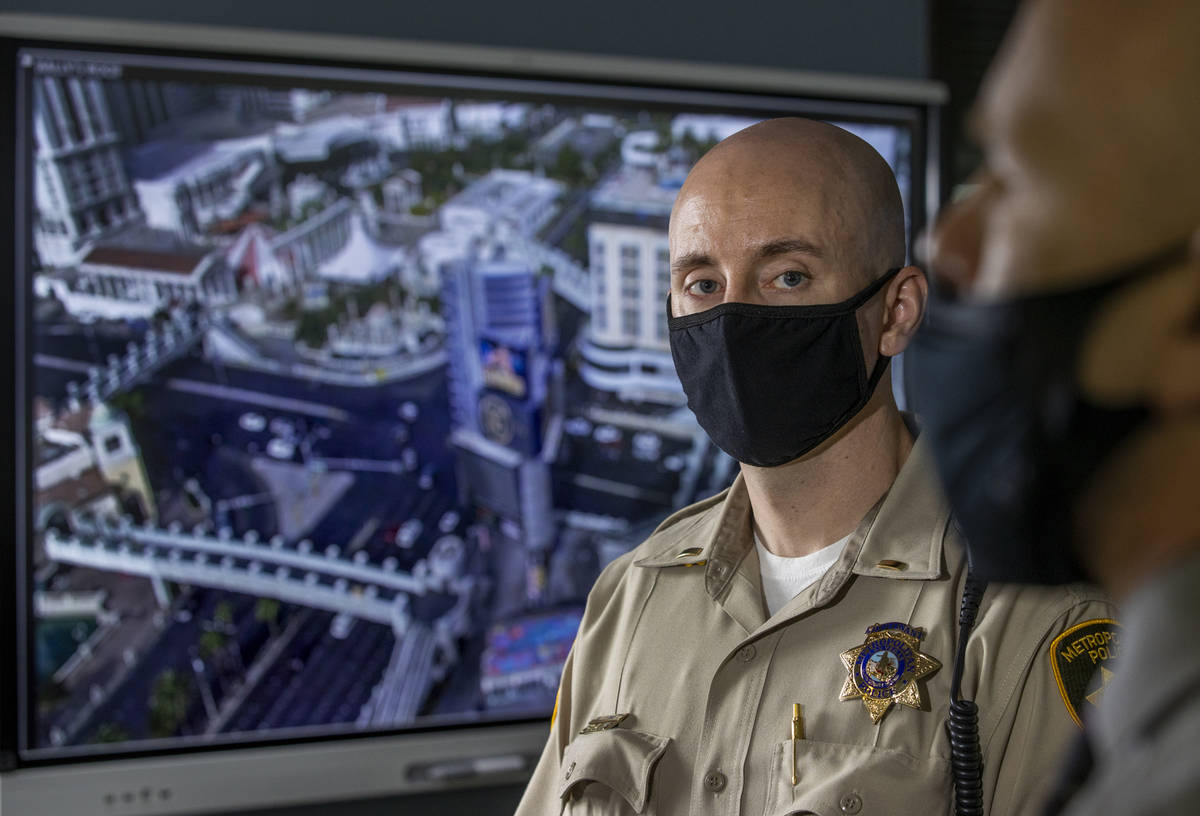 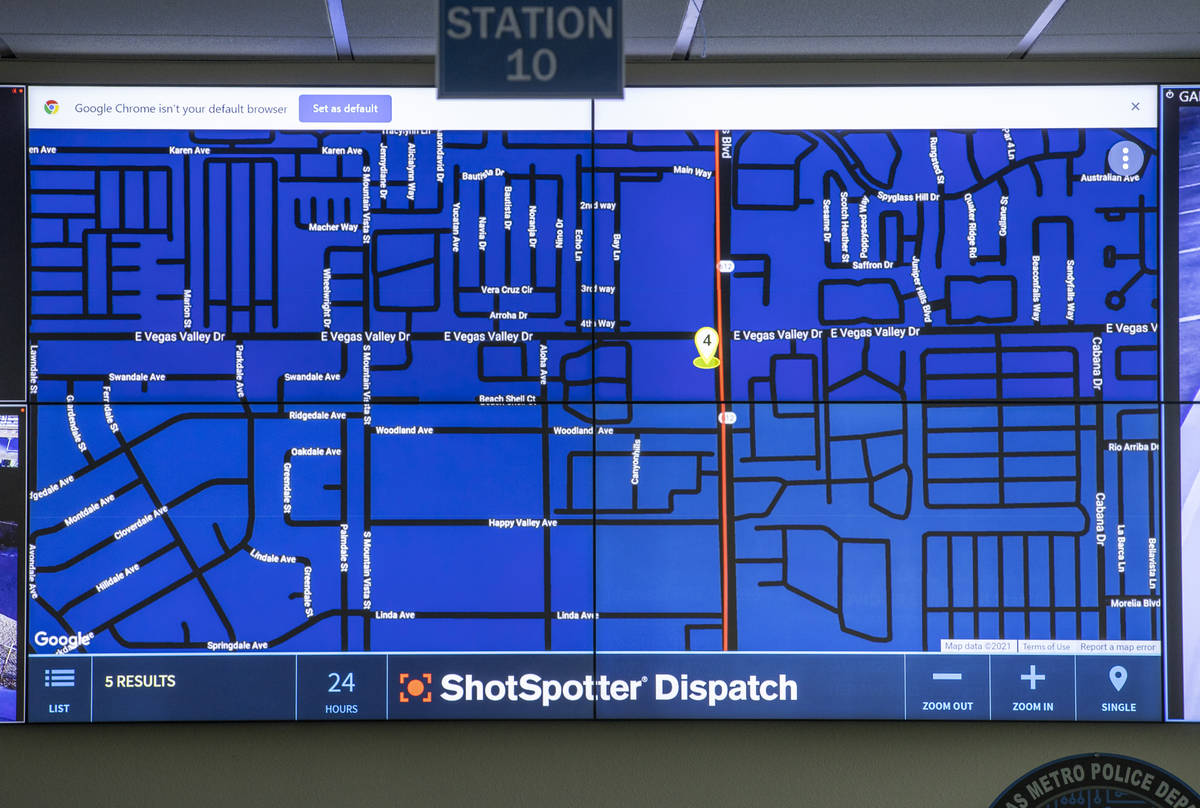 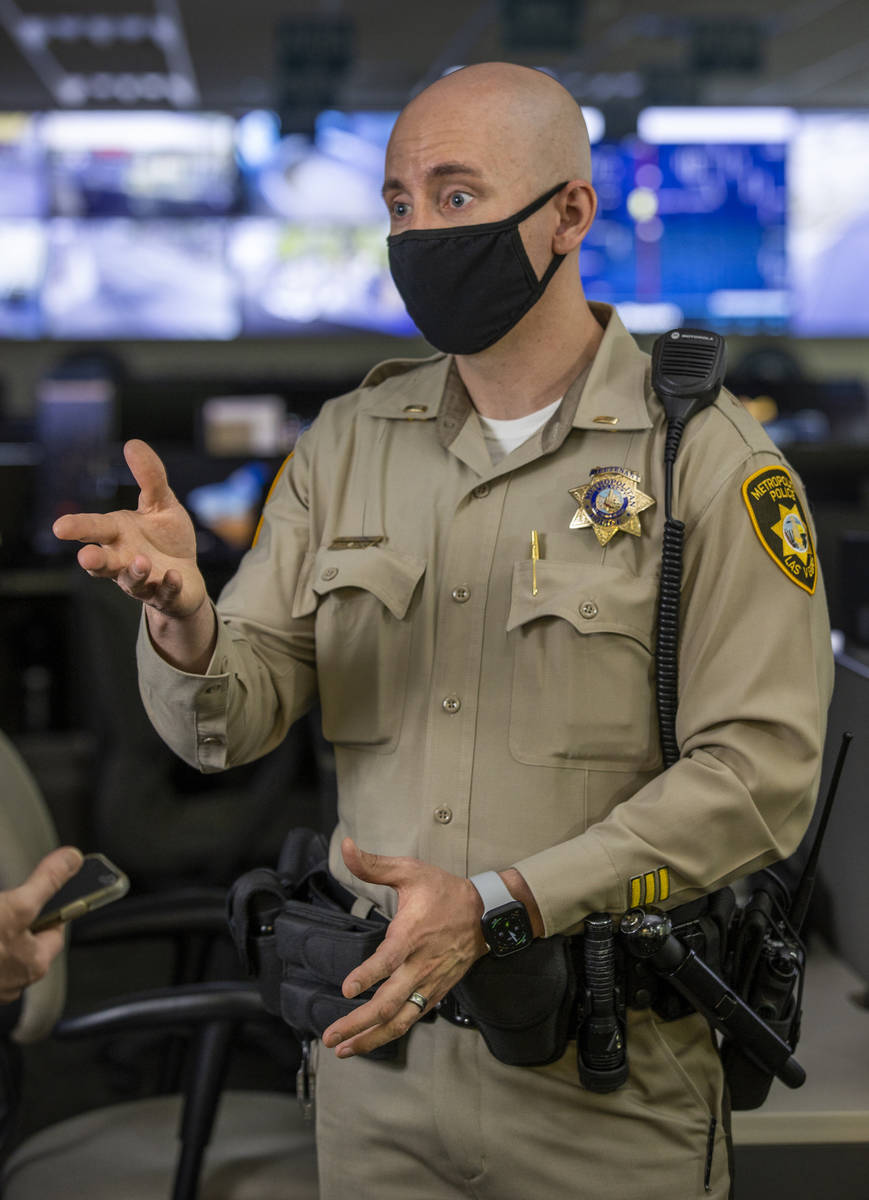 Las Vegas police didn’t need to rely on someone dialing 911 to learn of a fatal shooting in front of a hookah lounge in the early hours of Feb. 20.

A gunshot audio detection system used by the Metropolitan Police Department, called ShotSpotter, alerted dispatchers in less than a minute to the sounds of gunfire in the parking lot at 6020 W. Flamingo Road. Officers acting on that ShotSpotter alert soon found a man dead at the scene and later arrested two suspects.

ShotSpotter technology relies on audio sensors throughout the valley to detect the sounds of possible gunshots. The audio from those sensors is analyzed by a computer and ShotSpotter employees to discern if the sound was, in fact, gunfire. If it was, dispatchers in Las Vegas are given an exact address of where the gunshots came from.

Police said the program has been so successful that it was expanded in the Las Vegas Valley by 300 percent in late 2019. It now covers some 24 square miles in Clark County.

But while police say the ShotSpotter accuracy rate was 96 percent in 2020, some have questioned that figure.

Dave Maass, a visiting professor of media technology at the University of Nevada, Reno said there are also concerns about whether ShotSpotter violates privacy rights. If an error is made in a ShotSpotter alert, he fears it could escalate confrontations with police unnecessarily.

“When the police get an alert from ShotSpotter, they might actually assume this is a violent situation with an active shooter, so they are going to go in ready to deal with a shooting situation,” Maass said. “If a car backfires … (if) there are fireworks, we are potentially putting people into a life-or-death situation.”

Clark County Commission Chairwoman Marilyn Kirkpatrick said ShotSpotter was deployed in 2017 in a 6-square-mile area covering a portion of her District B, in neighborhoods near Nellis Air Force Base. The project was a pilot program funded through a $500,000 grant. The coverage area for the pilot program included areas in Metro’s northeast and south central area commands.

Kirkpatrick said the neighborhoods where ShotSpotter was deployed in her district had “fairly high crime with lots of homicides” at the time. She said Metro’s community policing efforts, combined with technology like ShotSpotter, have made those communities safer.

“I think it has worked out really well for us,” Kirkpatrick said.

Steinmetz said ShotSpotter’s accuracy in Metro’s jurisdiction in 2020 was 96 percent. He believes ShotSpotter also played a role in helping Metro reduce violent crime by 4.5 percent in the same year. He provided examples of arrests made for gun crimes that weren’t initially reported to police via 911, including a homicide case and a drive-by shooting in which a woman was grazed by a bullet while holding a baby.

“It not only helps us catch people,” Steinmetz said. “It also helps us identify victims.”

The sensors are installed in locations “ identified as persistent hotspots” for crime, Metro wrote in an email.

“These hotspots are areas plagued with high crime and large numbers of shootings and violence that often goes unreported,” Metro wrote. “The deployment locations are now spread throughout the entire Las Vegas valley (to include a small portion of North Las Vegas) and are located in eight of our 10 area commands.”

Steinmetz said all of the sensor placements “were approved by citizens in the area as well as the location they go on.”

At UNR, Maass’ journalism students partner with the nonprofit Electronic Frontier Foundation to conduct research about the increased use of technology in law enforcement, such as facial recognition, license plate readers, gunshot detection systems, body cameras and drones. The foundation describes itself as the leading nonprofit “defending civil liberties in the digital world.”

Maass said the public doesn’t have a lot of access to how ShotSpotter’s accuracy rates are determined. He said ShotSpotter’s accuracy is debatable and that a ShotSpotter employee once testified in court that the publicly traded company’s marketing department produced accuracy numbers. In a news account from Voice of San Diego, it was reported that police there are closely monitoring the accuracy claims of the technology. The Associated Press reported on a National Institute of Justice field test that found ShotSpotter accurately detected 80 percent of the shots fired.

“ShotSpotter seems to have a pretty high error rate, and it might be set off by fireworks, a car backfire,” Maass said. “Who knows what is setting it off because we don’t really have good access to that kind of information.”

Metro said ShotSpotter does not record people talking, but Maass said it is “unclear how much audio is recorded. It is sitting there listening all the time.”

“It has been acknowledged that ShotSpotter does passively listen to voices and hear voices,” Maass said. “It may delete it pretty quickly, but the fact remains this technology can record people.

“The track record for ShotSpotter and their public marketing material, and the fact that their error rate has come into question quite a lot leaves me a little skeptical of what police are saying about ShotSpotter and what ShotSpotter is saying.”

ShotSpotter spokesman Sam Klepper said the program is being used in roughly 110 cities across the U.S. and in some international locations. He said the system is “very accurate,” with accuracy over the past two years placed at 97 percent. He also said the technology used by the company has improved over the years as technology has improved with it.

“We continually invest in the system to improve detection and location of gunshots,” he said.