RJ App
Vegas News, Alerts, ePaper
OPEN
Hear from Celine Dion about her 16 years on the Las Vegas Strip and what the future has in store for her. (Video courtesy Caesars Entertainment) 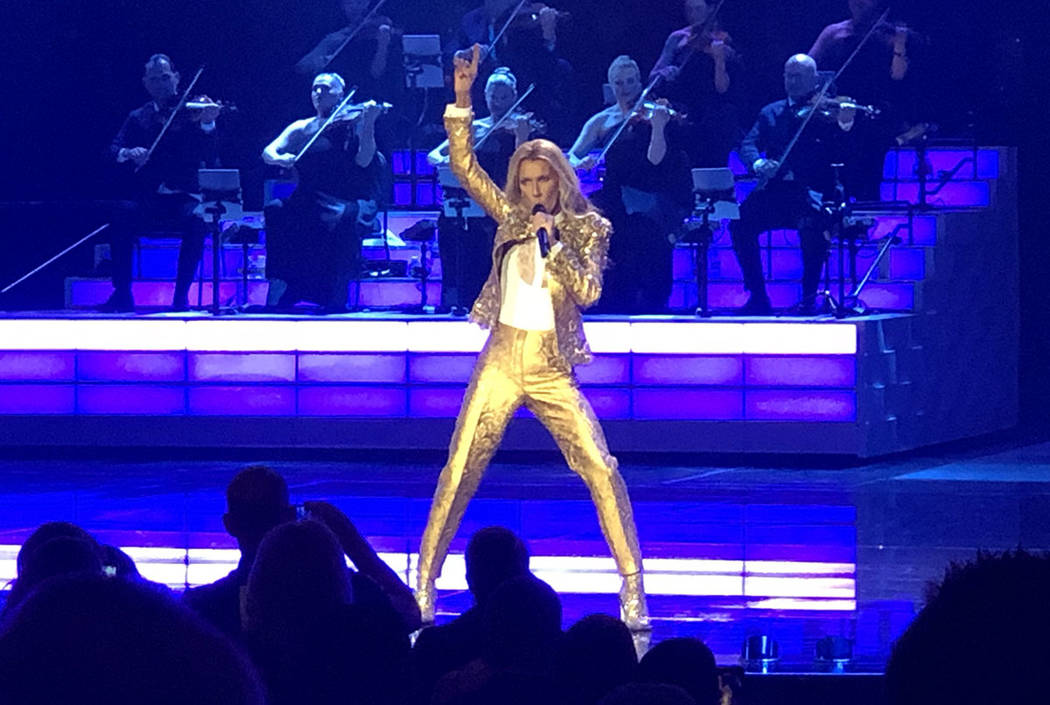 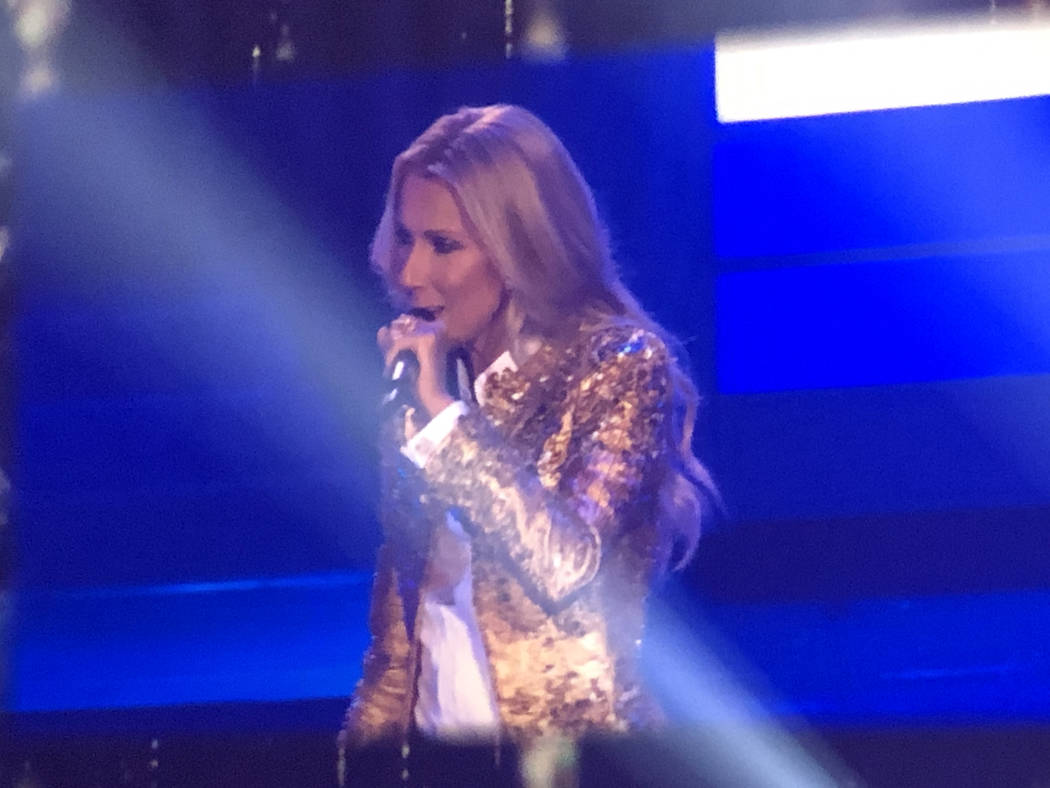 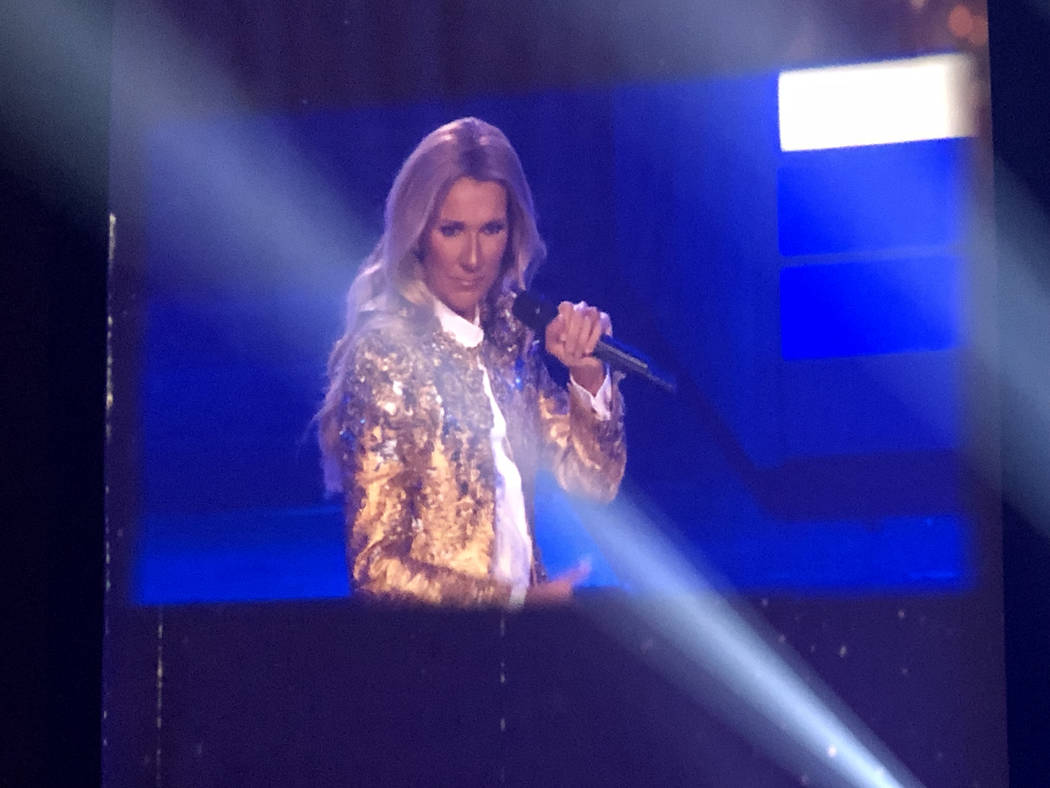 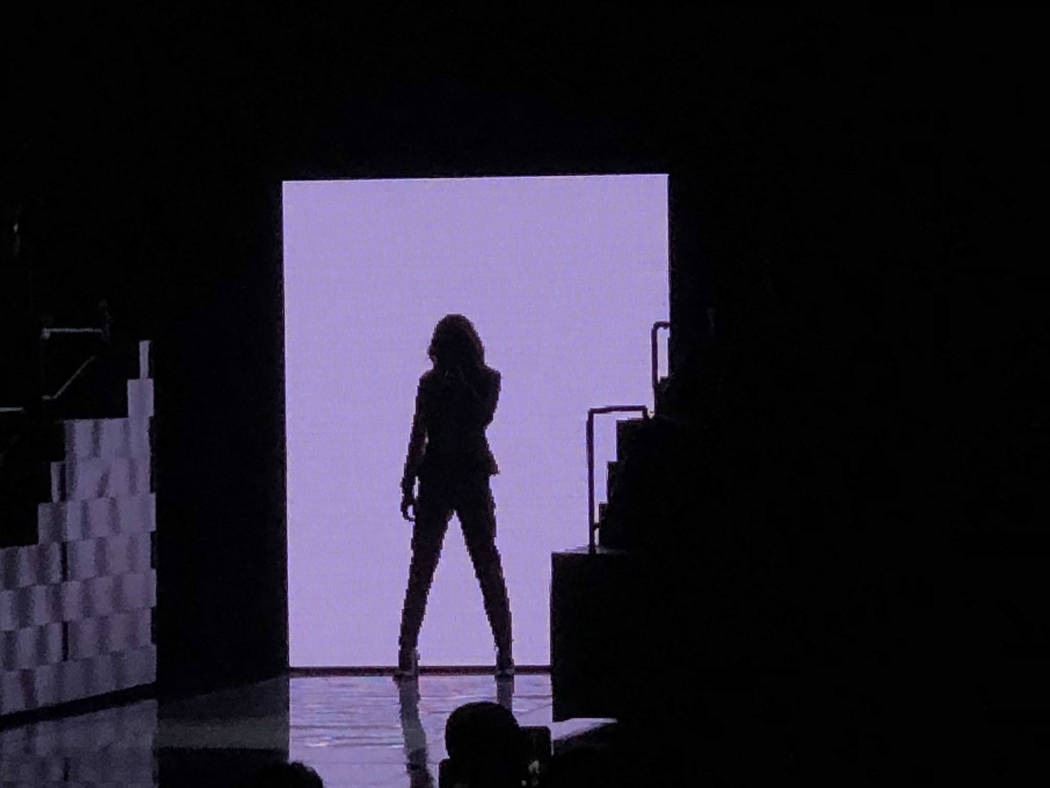 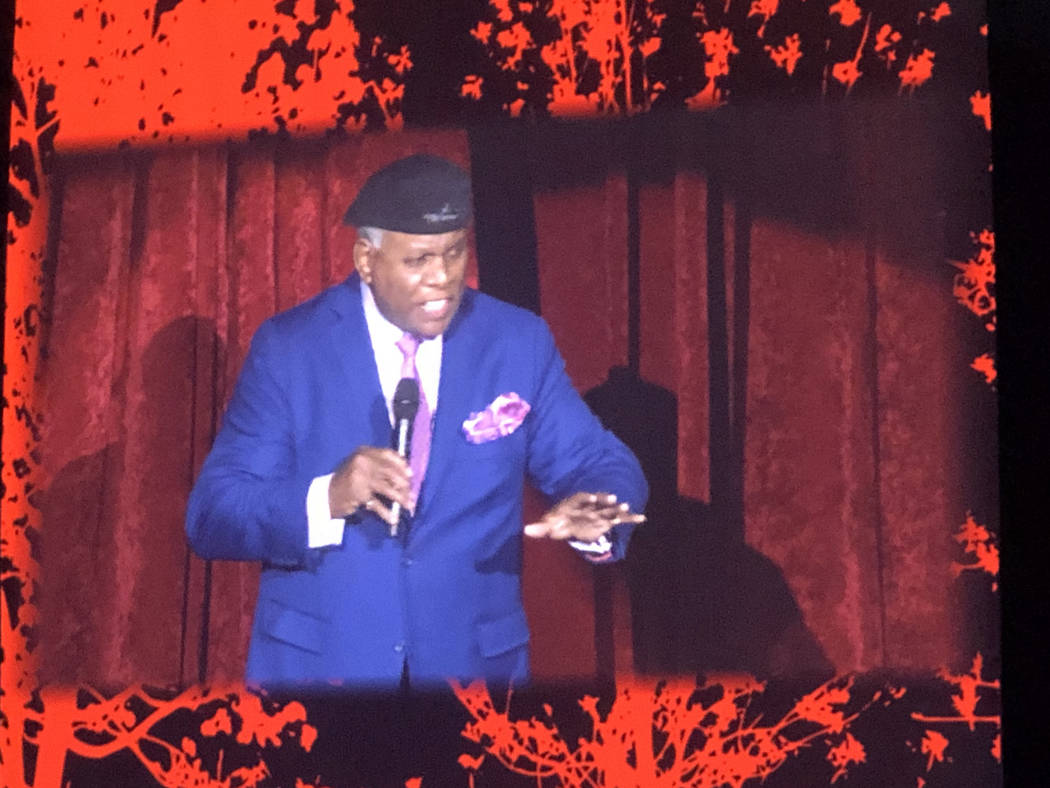 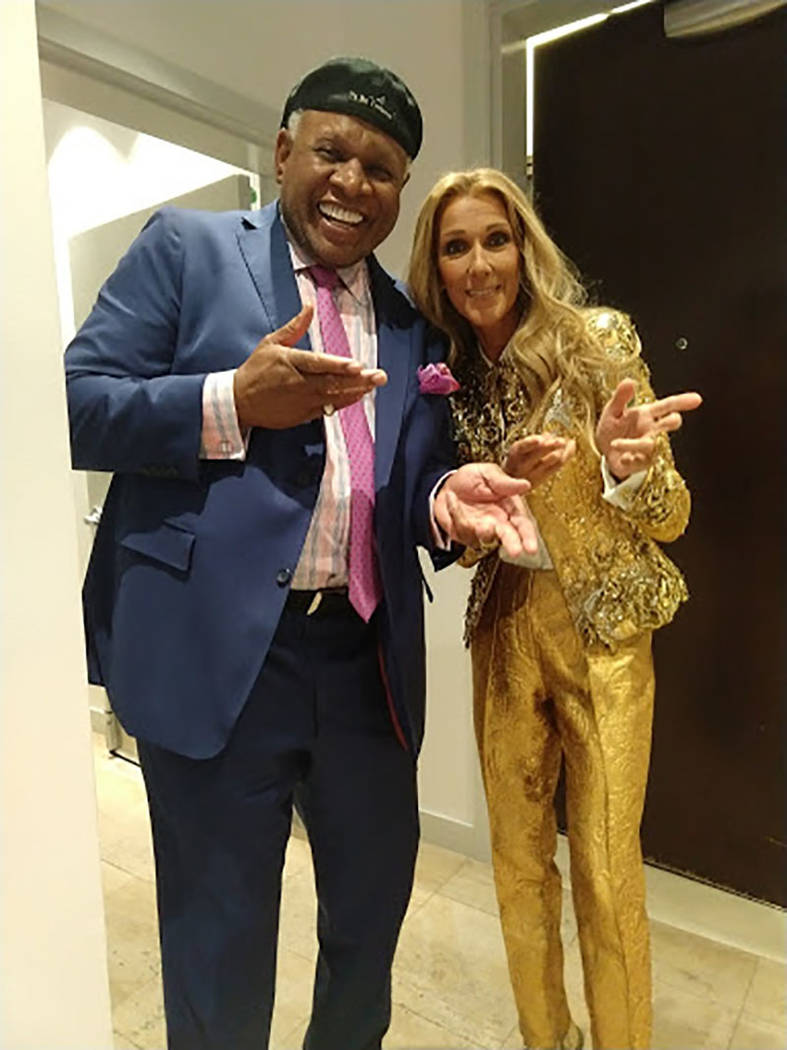 Celine Dion and George Wallace are shown in Dion’s final show at the Colosseum at Caesars Palace on Saturday, June 8. 2019. (George Wallace)

In her sendoff at the Colosseum at Caesars Palace, Celine Dion opened with “The Power of Love.”

Then she felt it.

Dion was greeted with a full-throated roar and a standing ovation from the start as she opened her 1,141st and final show Saturday night at the Colosseum.

“On behalf of my extended family, we are very excited to be here tonight because this is home away from home.”

“This is our final show in this beautiful Colosseum, and it’s kind of strange. When they started to put it together I was oof, I don’t know,” Dion said, to a cascade of cheers. “I thought I misunderstood something, and I was going to be here for three months or something. But it has been 16 incredible years.”

The night started with the video Dion recorded with her family and a collection of Vegas drag performers, along with the requisite Elvis impressionist. The 18-wheeler Dion is driving breaks down, and then an SUV full of drag queens (driven by Dion tribute artist Steven Wayne) stops.

As the crew drives off toward L.A., the camera shows the vehicle’s bumper sticker, “Celine Courage Tour.” And for the woman for whom Caesars built the Colosseum, that’s where the highway leads.

Dion thanked her orchestra for all of their time and hard work with an appropriate parting gift. All 30 band members received Boucheron watches, a favorite of the late Rene Angelil, valued at about $6,000 (or about a $180,000 outlay, says the calculator on my Apple Watch), but are really priceless considering the sentiment. A gift well-deserved, believe it.

AEG Presents/Concerts West Co-CEO John Meglen said he is “not happy” with Caesars Entertainment’s decision to close its exclusive booking contract with his company. Since the Colosseum opened in 2003, AEG has served as the venue’s exclusive promoter and booking partner, but Caesars has a new deal with Live Nation that takes effect just as the Colosseum closes for renovations in July.

During a podcast interview in May with veteran rock-music journalist Bob Lefsetz, the host asked Meglen why his company had decided not to renew its deal at the Colosseum.

“It wasn’t necessarily that we didn’t decide,” Meglen said. “One, there was some miscommunication between our organization being involved in the arena (T-Mobile), and that had something to do with us operating the Colosseum. But at the end of the day, you know, they picked their horse, after all these years. I don’t know why. We’re not happy about it.”

AEG and MGM Resorts International are business partners in T-Mobile Arena, but Live Nation also books many touring shows in the facility. The move by Caesars Entertainment to partner with Live Nation exclusively does strengthen that company’s hold on Strip residency headliners. Live Nation and Caesars are also in an exclusive booking partnership at Zappos Theater at Planet Hollywood, and Live Nation is also the partner in most residencies at Park Theater at Park MGM — including Lady Gaga and Bruno Mars.

For much of Dion’s run at the Colosseum, George Wallace has been ready to fill in for 15 or so minutes if she is running late. He’s actually appeared, unbilled, a few times over the years. He was onstage Friday and again in Saturday night’s finale to warm up the crowd.

“It’s an honor to be with her,” Wallace says, “and it’s a great international audience.”

Wallace continues to headline at Westgate Cabaret, where the offer for Dion to return the favor is always open.

We’re still anticipating the formal announcement of Shania Twain headlining one of Caesars Entertainment’s resident headliner venues, either Zappos Theater or the Colosseum. Twain, who was in the audience at Saturday night’s show, originally headlined the Colosseum starting in 2012. At the time, the booking strategy was to pull from the thousands of Canadian contacts the hotel has developed as a result of ticket orders for Celine’s shows.

As Meglen said when Twain was originally booked, “Just using that alone is usually something that will help in the success of the show.” The series “Still The One” ran for 105 performances, through December 2014.

AEG Live’s news release wrap of the finale late Saturday night listed Dion’s total number of shows at 1,141. Earlier this week, AEG Live Senior President John Nelson recited the number as 1,144 (that was the number originally cited in the headline of this column). 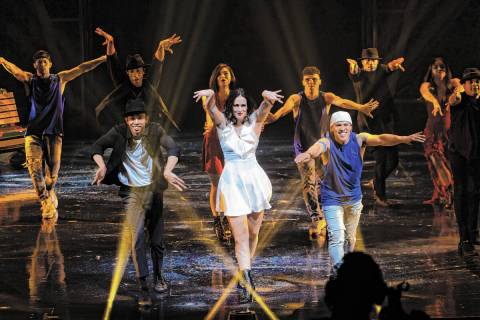