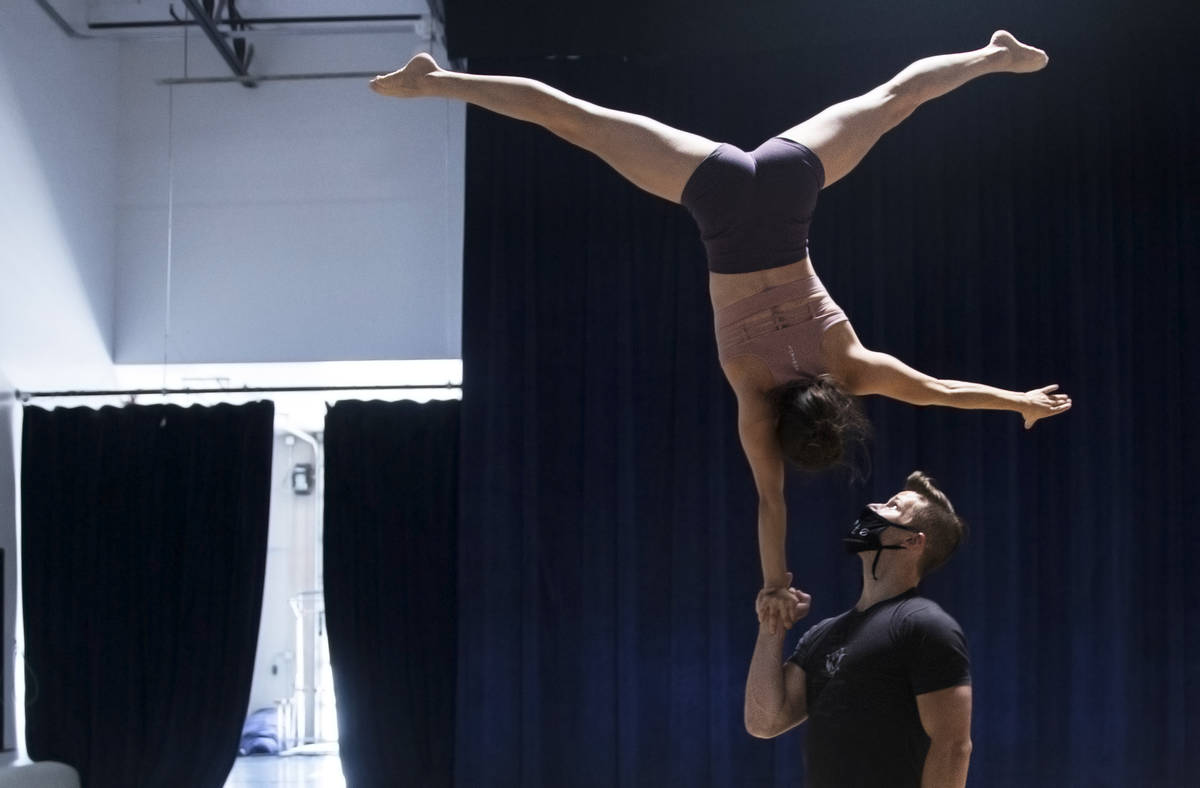 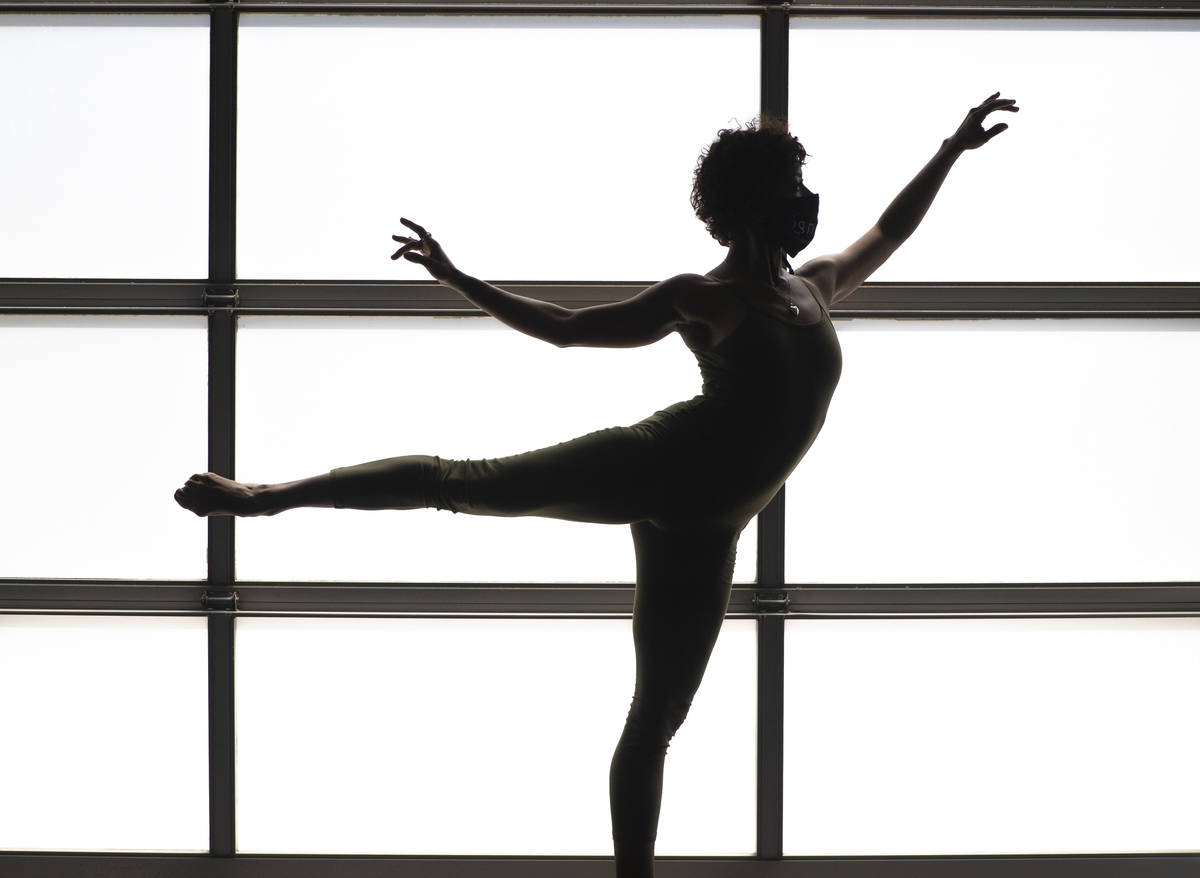 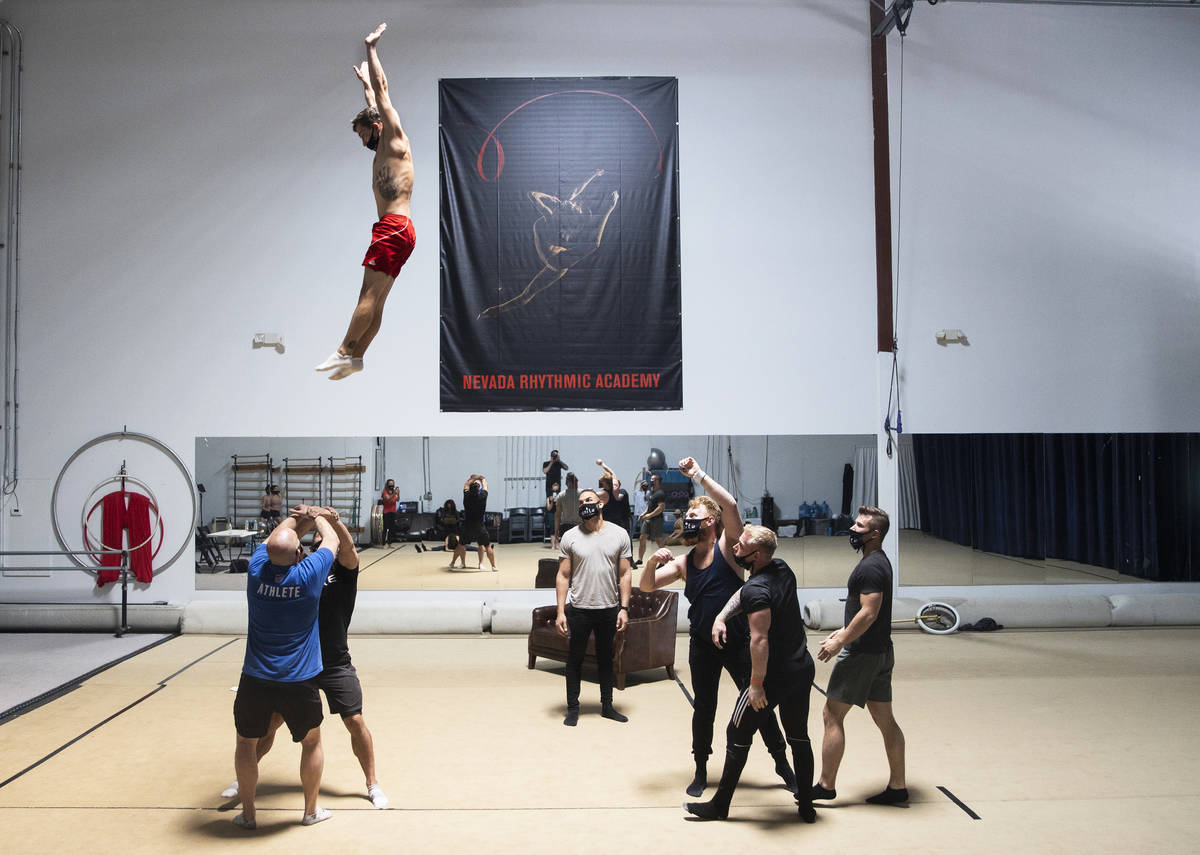 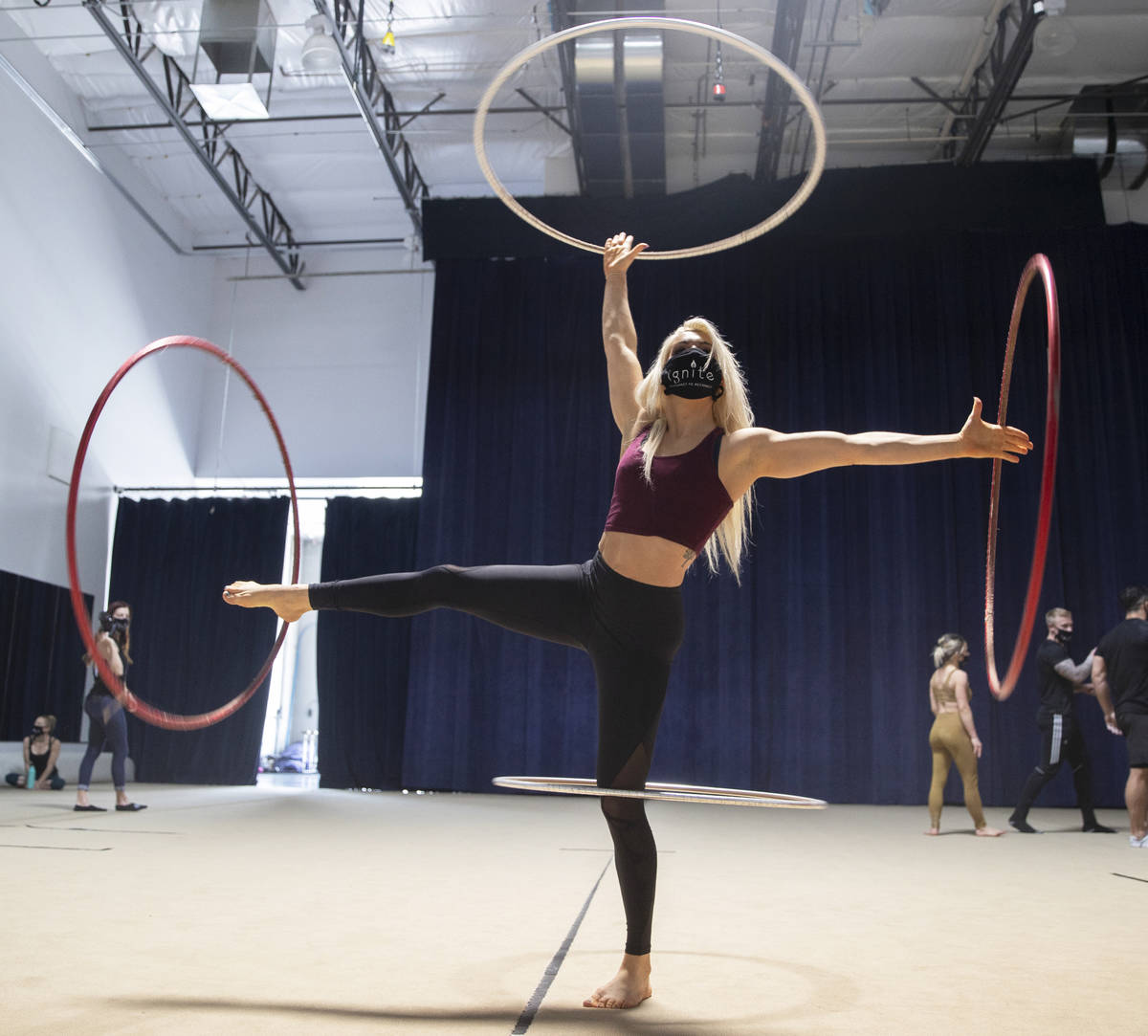 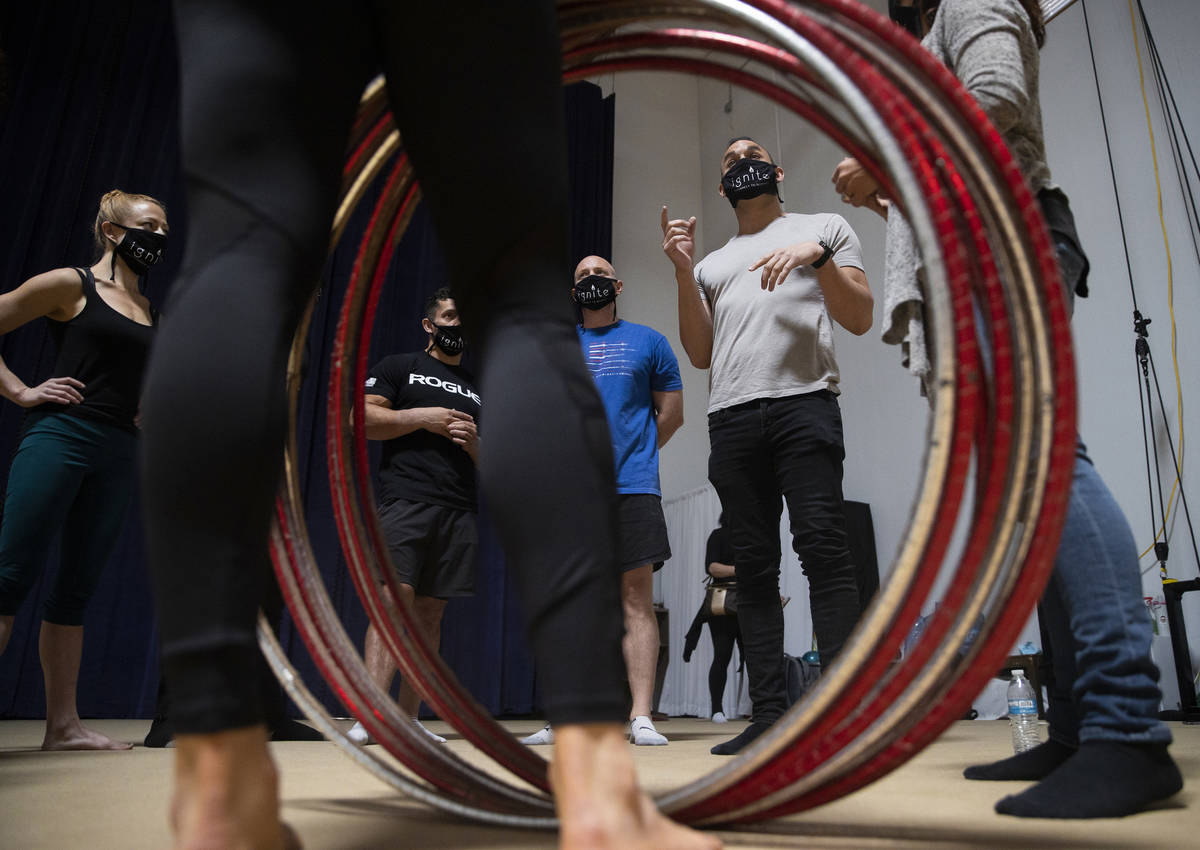 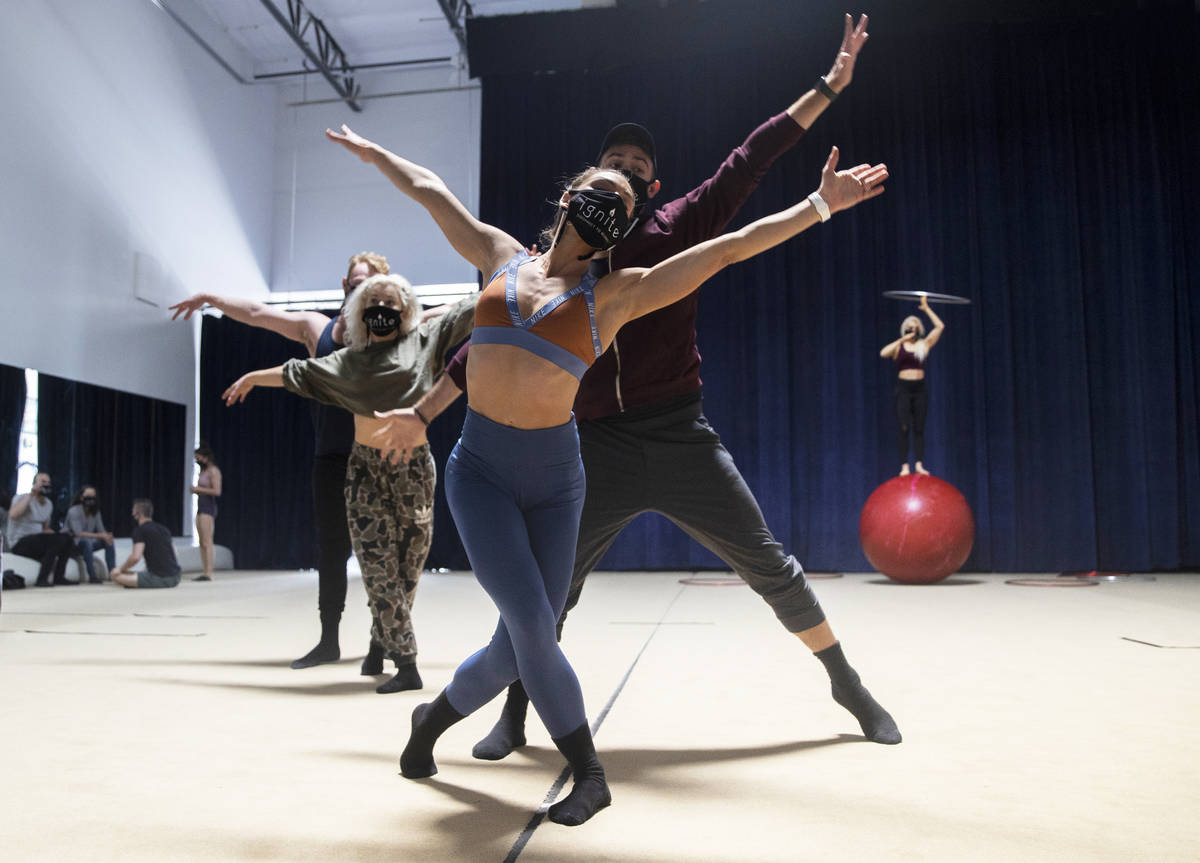 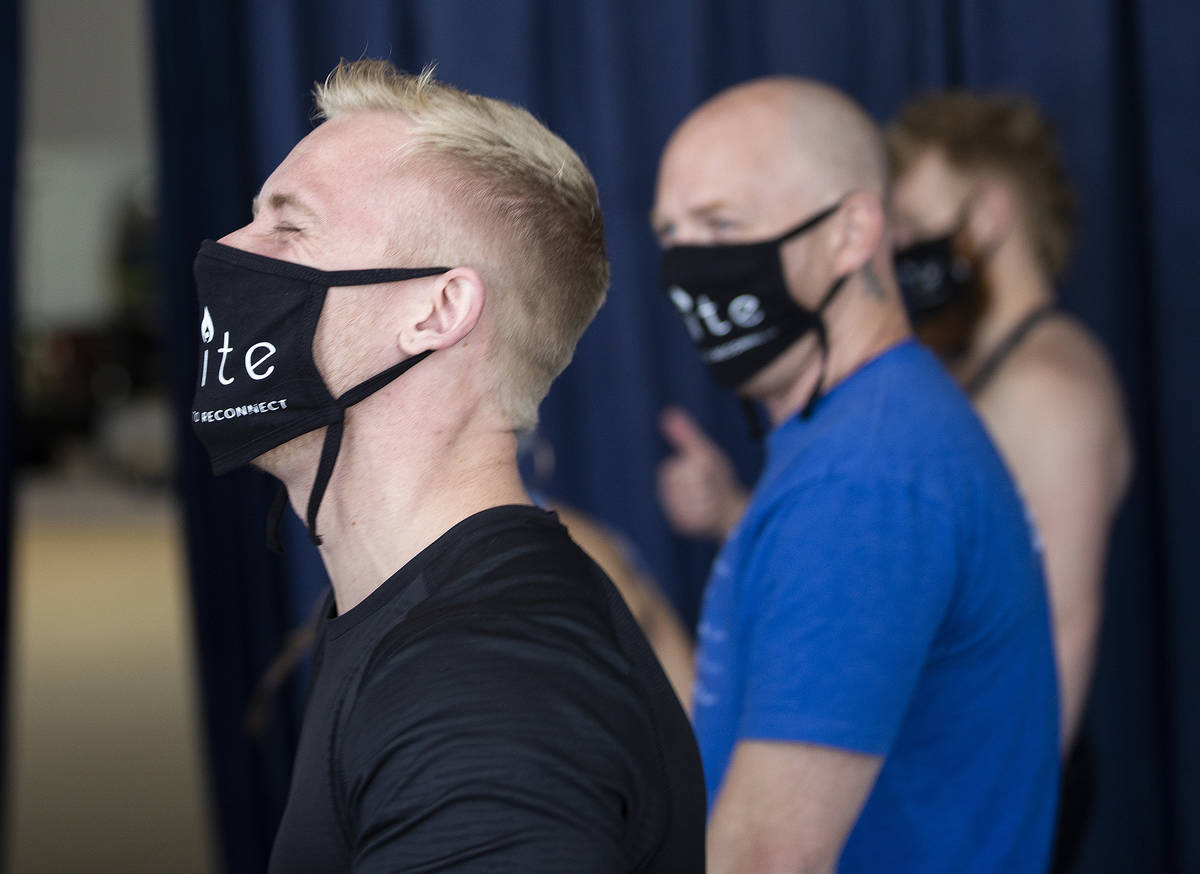 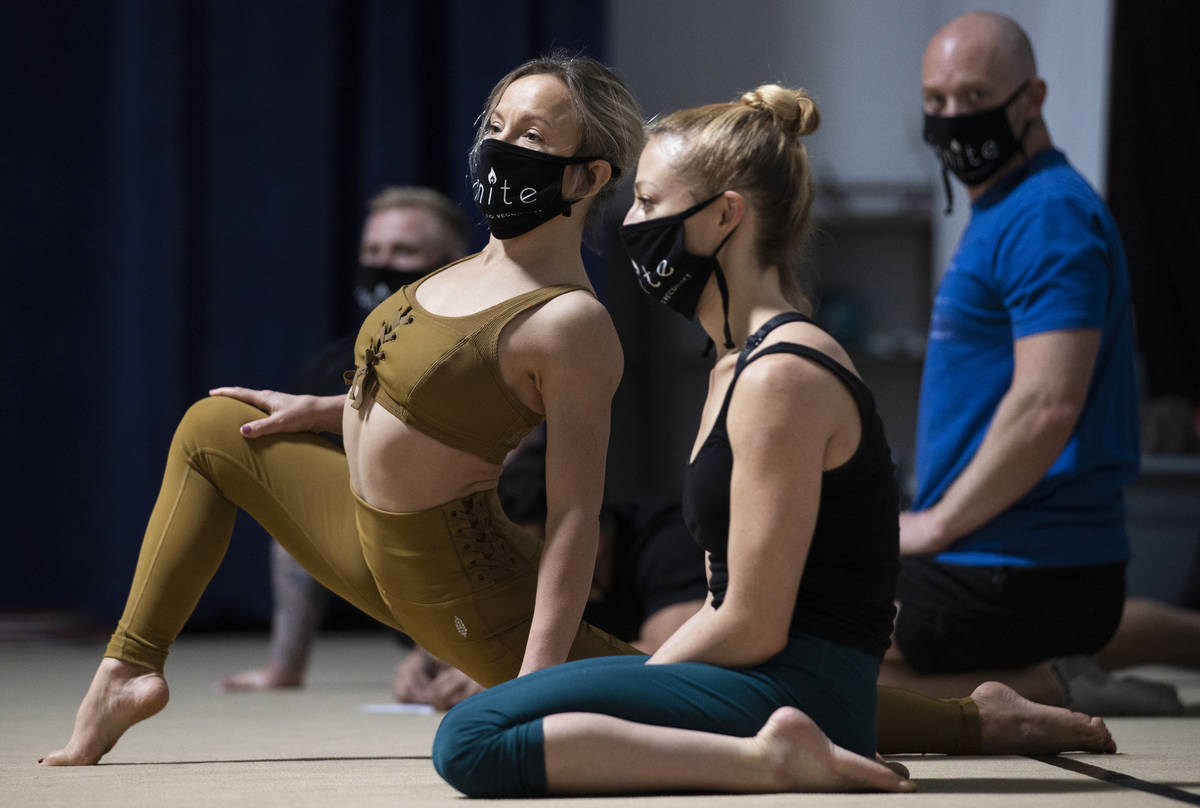 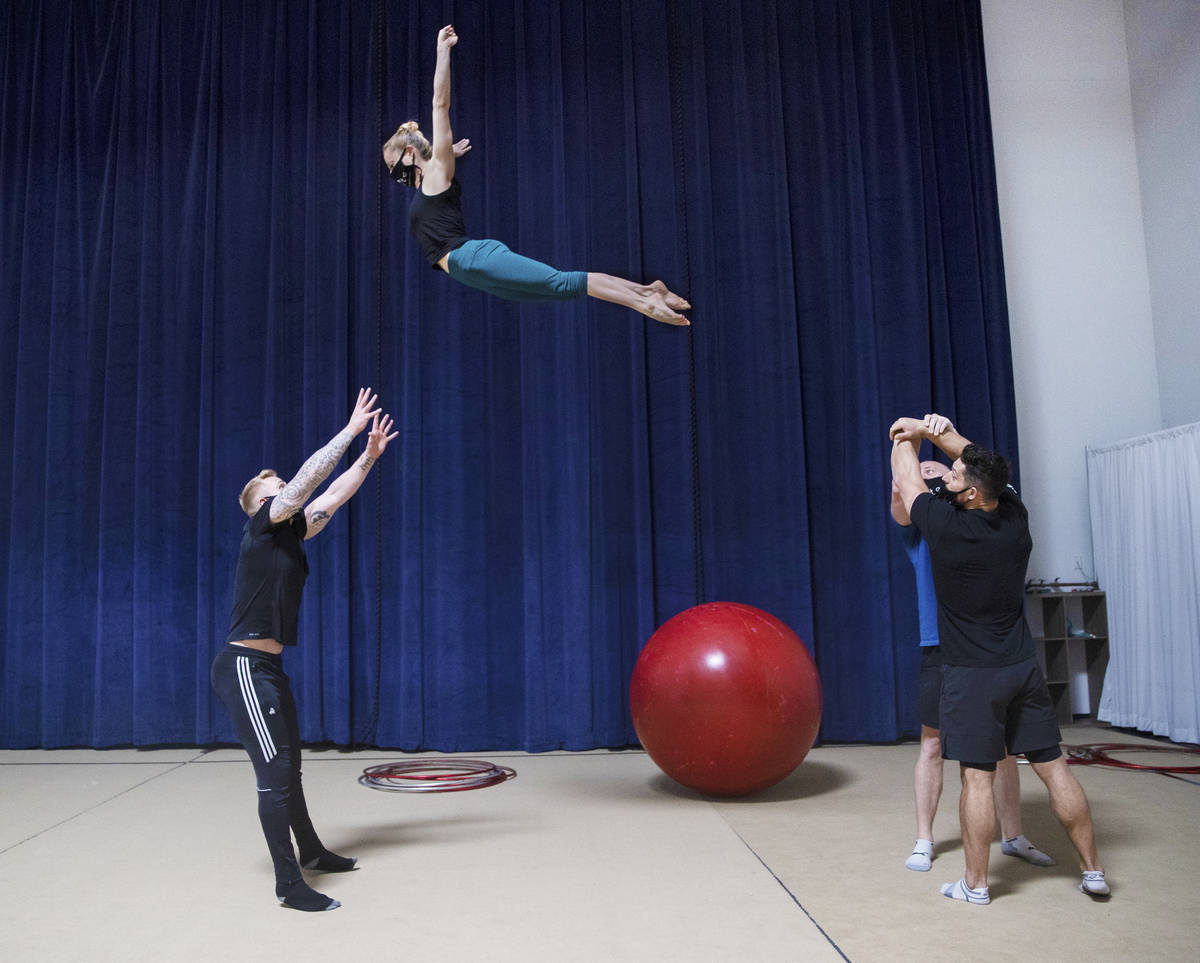 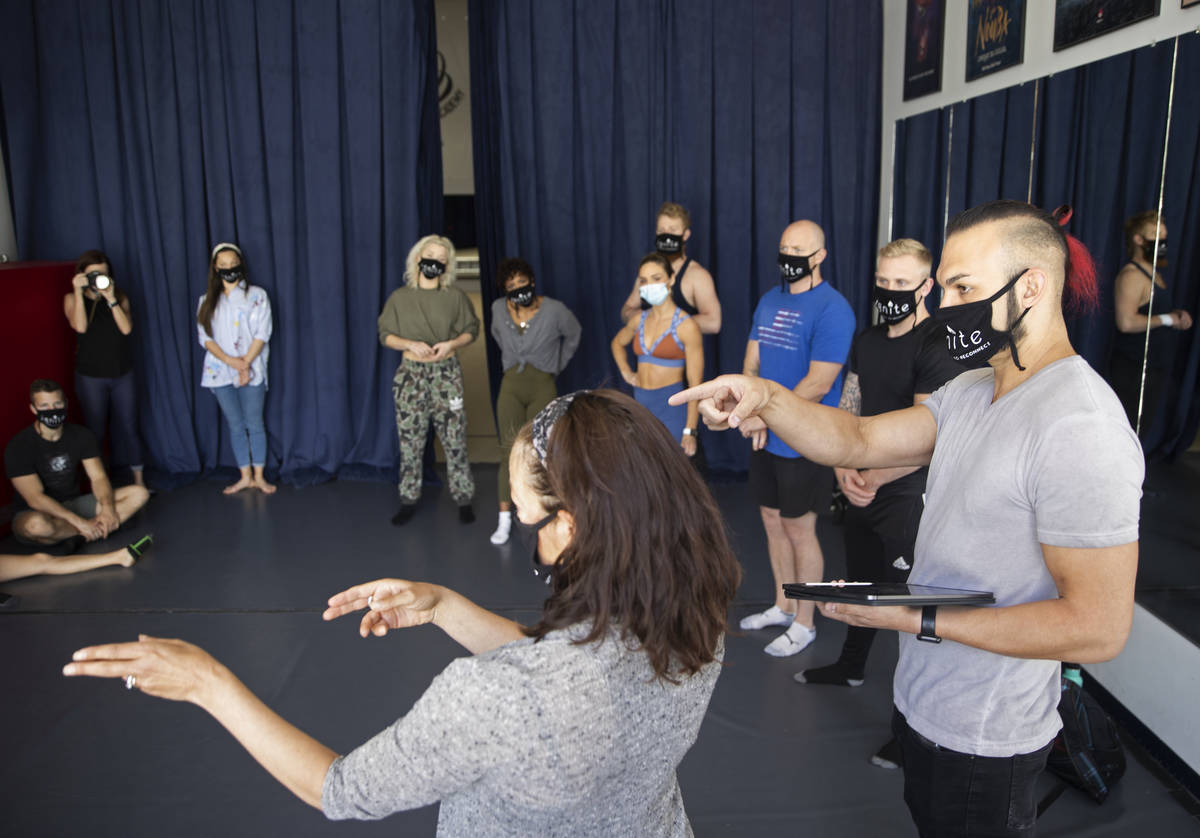 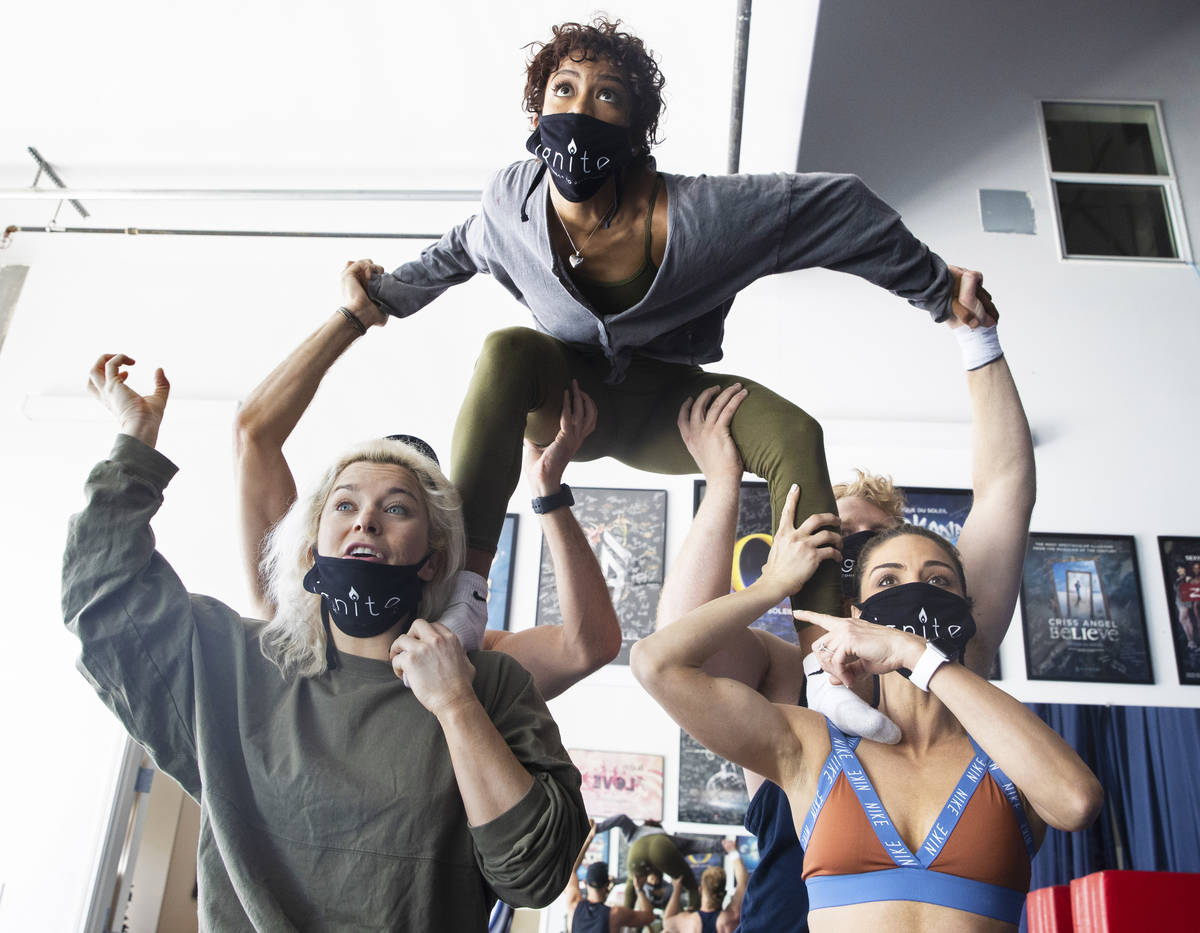 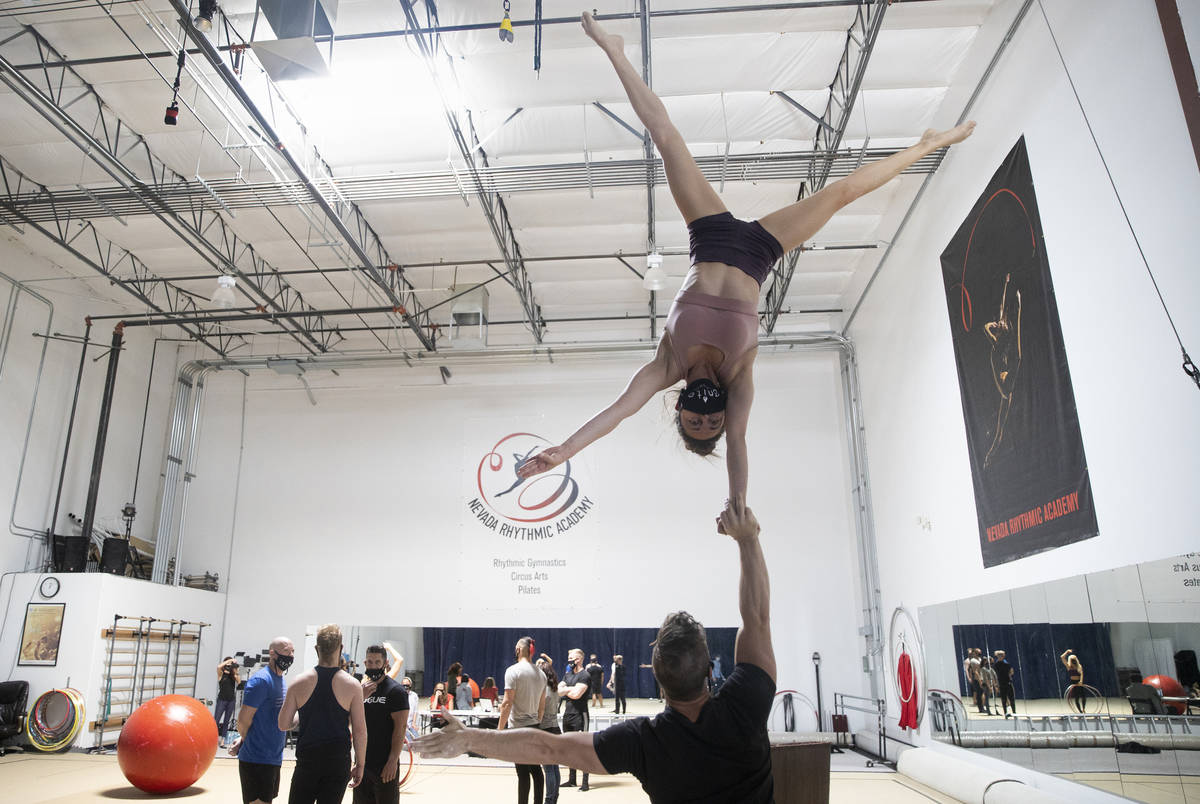 You know when you see a red ball, either on the nose of a clown or beneath a hula-hoop artist, the circus is back in town.

“Ignite,” an outdoor circus production, features such red balls (or Walking Globes, if you will), and a lot more, in its presentation May 7 and 8 at Sandy Valley Ranch. The arena and festival-style entertainment grounds cover about 40 acres about 45 minutes south of Las Vegas (the physical address is 1411 Kingston Road, Sandy Valley).

“Ignite” is the creation of a pair of Cirque du Soleil artists and longtime Las Vegans.

The show’s co-founders are Sandi Croft, the former artistic director of “Mystere” and “O” and the director of creation for the charity show “One Night For One Drop;” and Brandon Pereyda, the aerial chain artist and emcee of “Zumanity.” Pereyda’s soaring figure and neon-red Mohawk were long a signature act in the show, which announced its permanent closing in November. Artists from another longtime Strip favorite that had closed, “Le Reve” at Wynn Las Vegas, are also in the “Ignite” cast.

Croft and Pereyda had been watching the several outdoor entertainment productions that had cropped up during COVID. So had their friends and colleagues in the Vegas entertainment community. Thus inspired, the duo ignited (hence, the title) the concept of contemporary acts, rooted in traditional circus, performed in a Mojave Desert setting.

The artists found the acreage and a willing partner, Sandy Valley Ranch owner Marilyn Gubler, known as The Boss Lady, who is providing a full working-ranch environment as the Ranch looks to expand its appeal. The result is a family friendly, outdoor circus atmosphere from artists, clowns and acrobats who have long starred in Strip theaters.

Though “Ignite” is the show at the core, the event really covers six or seven hours. Show times are 7:30 p.m. each day, but the grounds open for camping guests at 4:30 p.m., and at 5 p.m. for all guests. Visitors can stay overnight in RVs for dry camping (the covered wagons, custom-built tiny houses and other lodging on the property are already booked).

The event is far removed from fancy Strip resorts. The Sandy Valley Ranch parcel is to be filled with food trucks, cowboy games, wine-tasting stations and mobile bars. A shuttle departs and returns to the Stoney’s Rockin’ Country parking lot (reservations required by April 26).

The event shuts down at 10:30 p.m. Tickets range from $65 for a single bleacher seat, to $125 for a VIP seat (those who are used to cushy Cirque theater seats should know that these are covered hay bales). All info is at ignitenv.com.

The acts themselves, more than two dozen, feature such performers as veteran fire artist Antonio Restivo of “Tournament of Kings” at Excalibur; “Mystere” at Treasure Island longtime baby character RJ Owens; Cirque contortionist Kyle Cragle; “Love” at the Mirage dancers Zoeth Cardenales, Taylor Bradley, Tiffany DeAlba and Alison Burke; and Vegas newcomer Grace Good with her hula-hoop act, during which she incorporates live fire and balances on a walking globe.

Good boasts 2.1 million followers on TikTok (as we say, she can’t walk the street of TikTok without being recognized). Her inventive, sometime explosive, video posts lend themselves to the social platform.

But Good has never been in a Cirque show. She just moved to Vegas from Nashville. The hula-hooper is formerly a member of the Cirque Dreams touring troupe, which is not affiliated formally with Cirque du Soleil but shares the company’s dedication to live performance.

“I moved to Las Vegas to find people who are like me and have the same passion,” Good said during a break in rehearsals. “Nowhere else in the world can you find so many artists who have been through this period.”

The performer looked around the room, at the “Ignite” cast, and said, “You can’t find this anywhere else.”