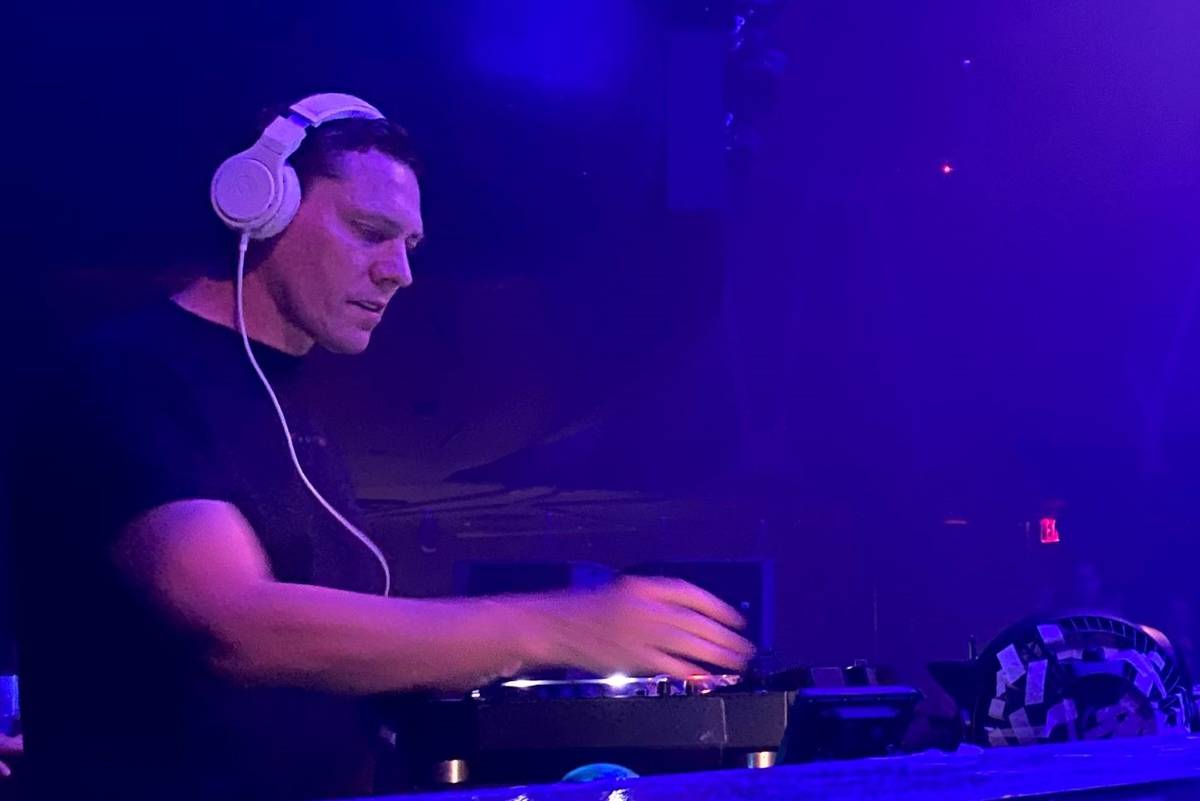 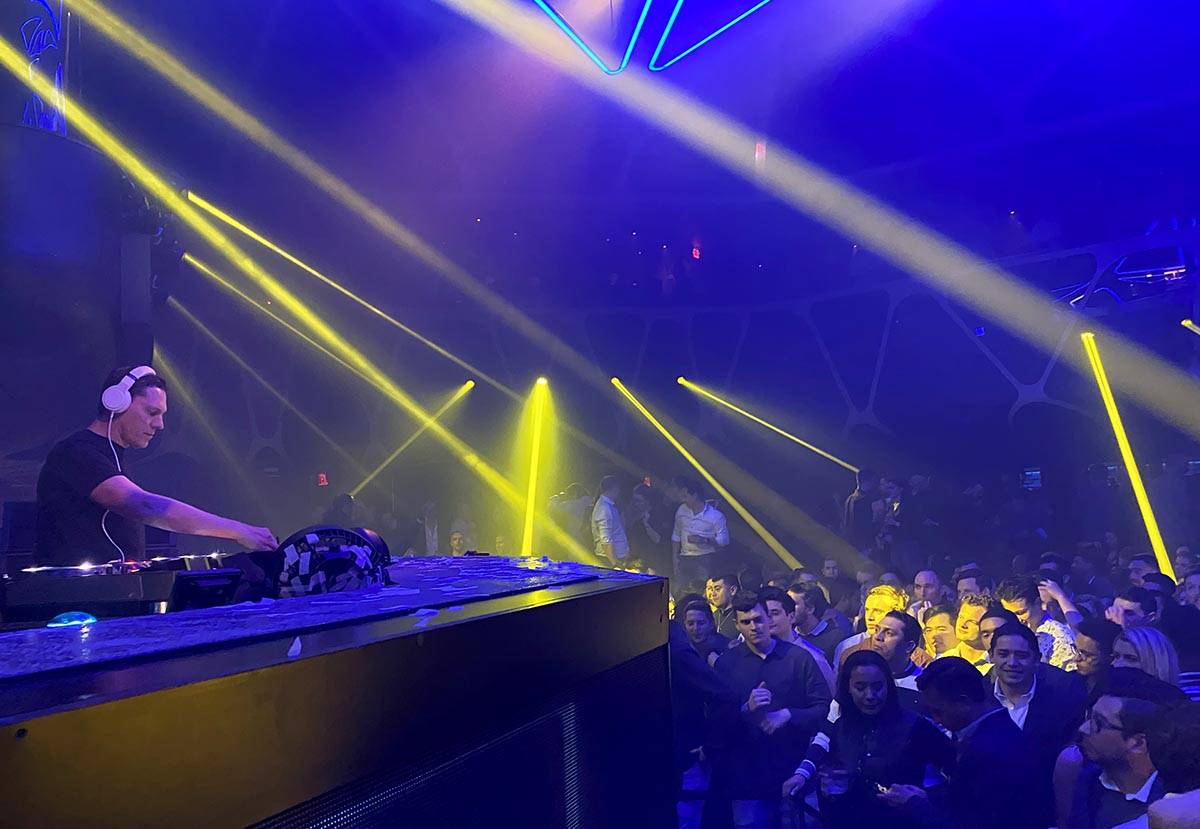 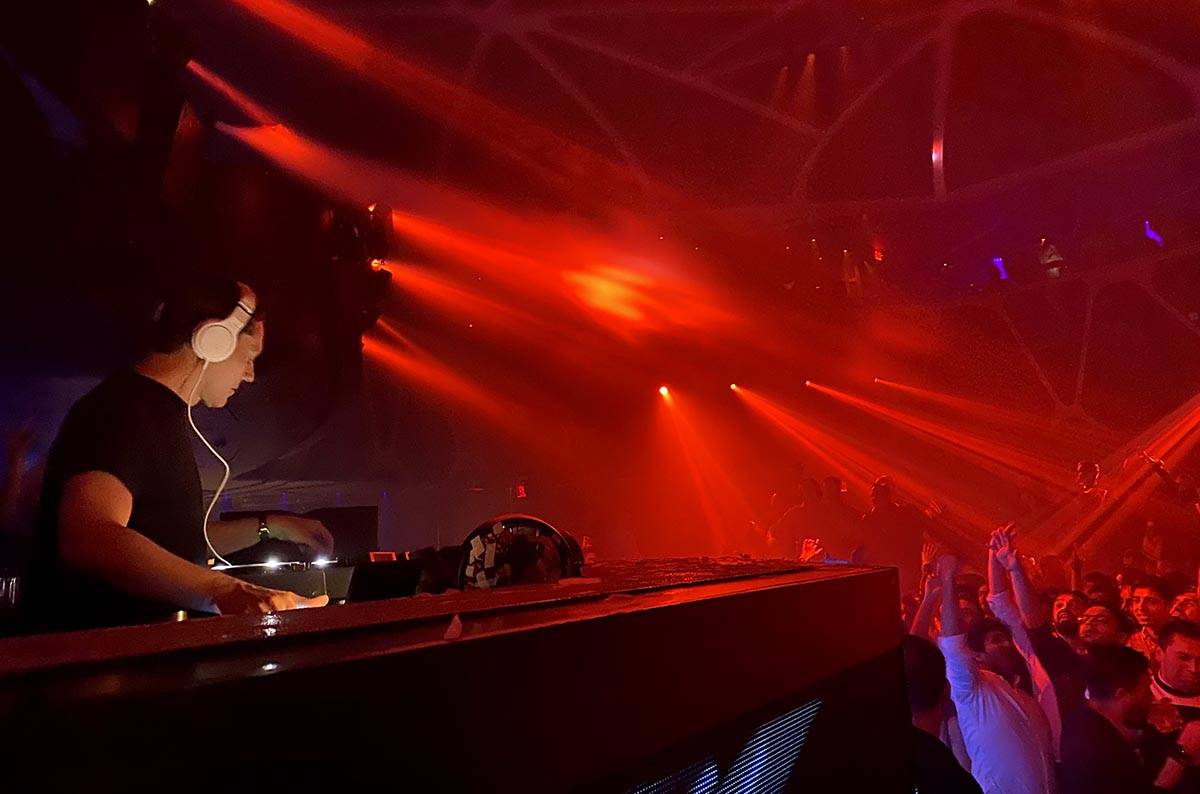 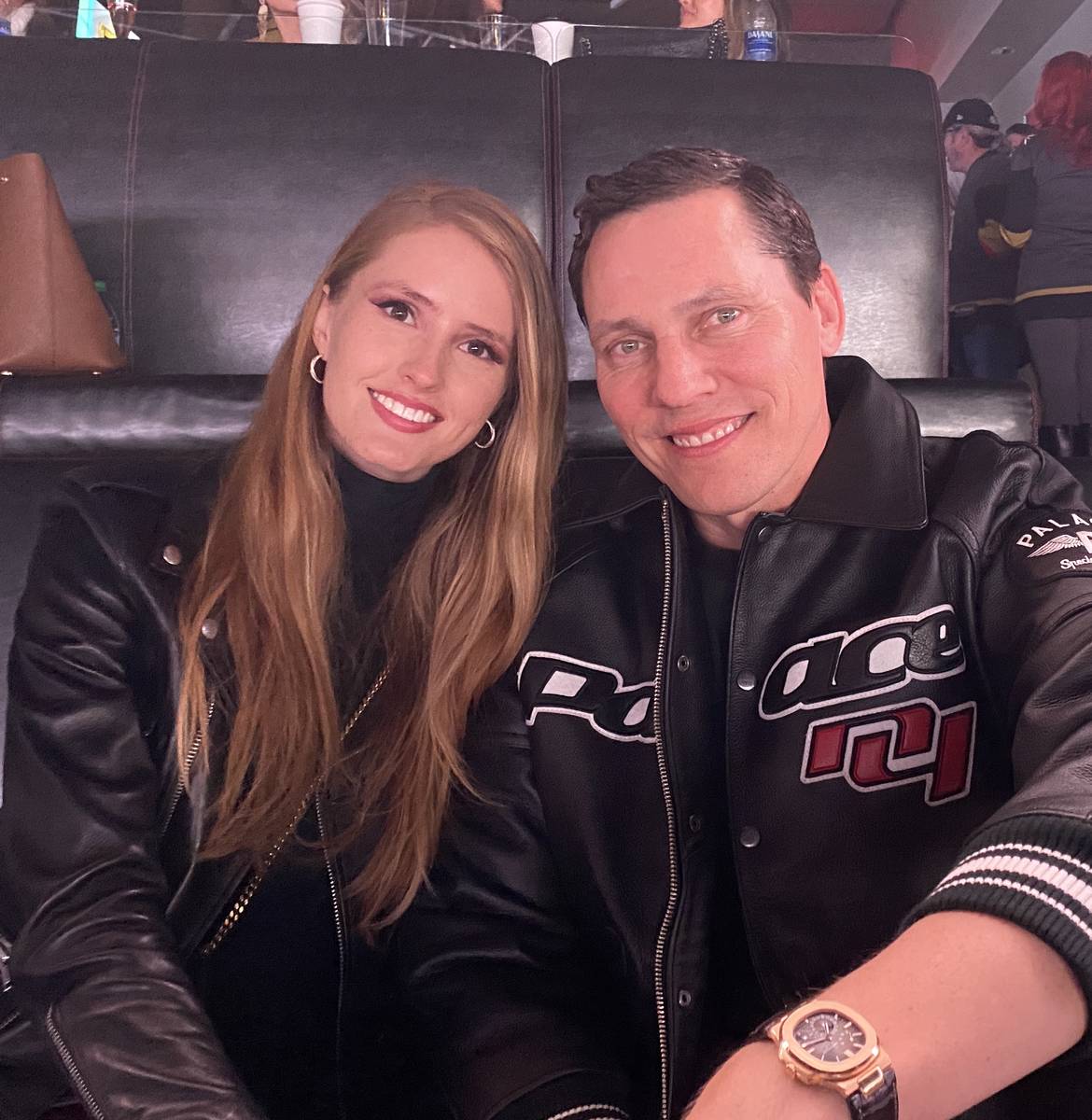 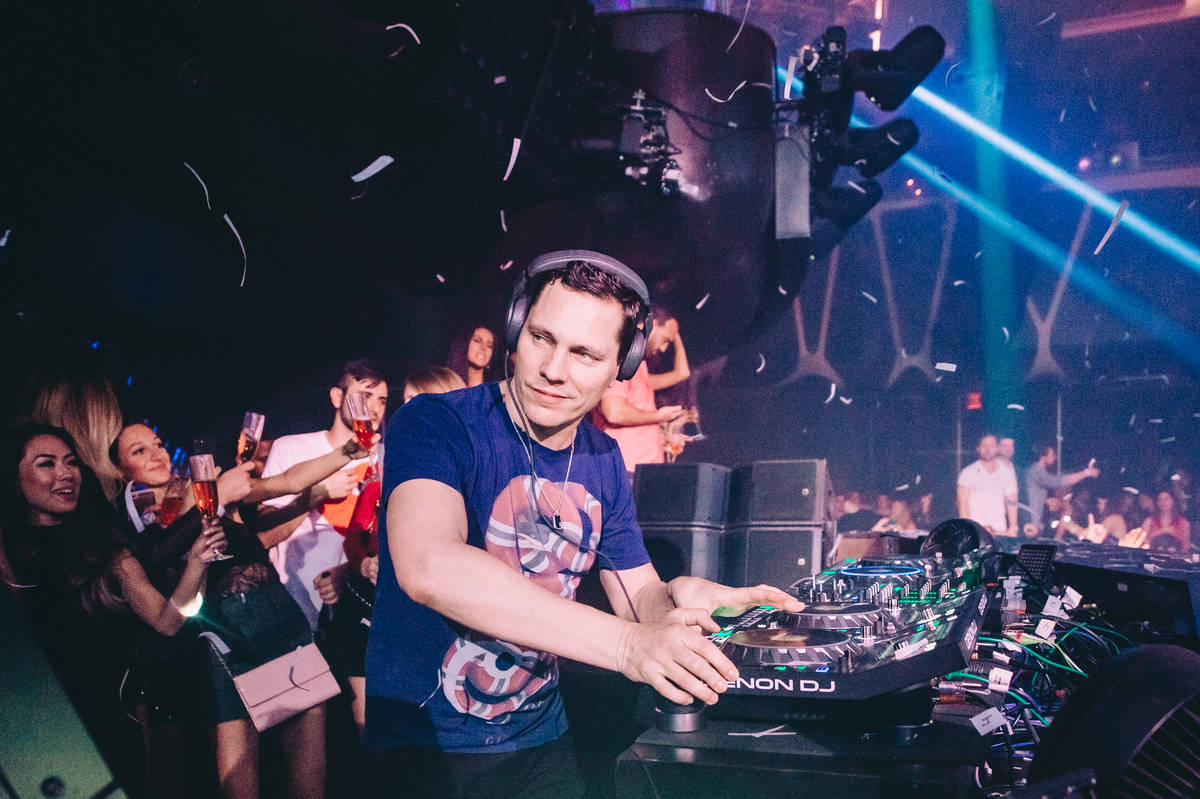 Tiesto has signed an extension with Hakkasan Group to perform at Hakkasan Nightclub and Wet Republic at MGM Grand through 2020. (Jordan Loyd) 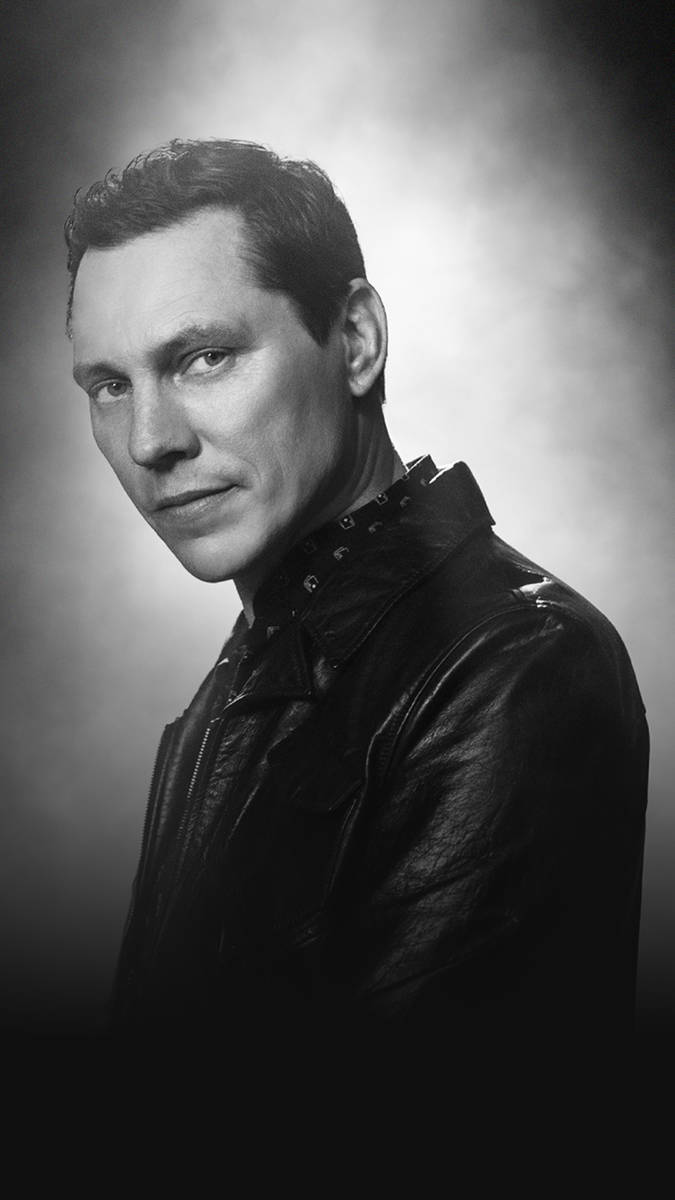 Tiësto is shown in a promotional shot for his upcoming residency at Zouk Nighclub and Ayu Dayclub at Resorts World Las Vegas. (Zouk Group)

Zouk Group, we’re getting to know.

The EDM superstar is boosting the nightlife company’s brand with a three-year club partnership to perform at Zouk Nightclub and Ayu Dayclub at Resorts World Las Vegas. Tiësto and the nightlife company formally announced the partnership with a video showing the EDM star touring the property for the first time, along with his latest release, “The Business.”

Big business, in this instance.

Tiësto and Zouk Group are both “legacy” figures in the EDM culture, with multigenerational appeal. The 52-year-old DJ has performed for more than two decades internationally, and since 2013 years has been a top draw at nightclubs and dayclubs for Hakkasan Group on the Strip.

Tiësto has also headlined at Electric Daisy Carnival, and owns the distinction of being the only EDM artist whose music is featured in the Bellagio Fountains show. A medley from “A Town Called Paradise” has been in rotation for six years, along with Celine Dion, Frank Sinatra and The Beatles.

Zouk is a long-standing nightlife company launched in 1991 in Singapore. The company has actually presented Tiësto in the early stages of his career. Zouk is a nightlife force in Singapore and Malaysia, which is just now expanding to the U.S. with its dual clubs at Resorts World.

“This is a very meaningful partnership,” says Zouk Vice President of Nightlife Ronn Nicolli, a veteran Vegas nightlife executive (13 years with Wynn Las Vegas; a brief stint with the Kaos at the Palms). “There is a lot of brand recognition there, it’s a perfect fit as one of our foundational partnerships. He was one of the first guys we reached out to.”

Of Tiësto’s existing name recognition in Las Vegas, Nicolli says, “It definitely helps.” The artist and company have had what Nicolli describes as “parallel stories” in arriving on the Strip after forging international notoriety.

“Zouk is a 30-year-old brand, which is almost unheard of in nightlife,” says Nicolli says. “And Tiesto himself is kind of bigger, in a sense, through this partnership.”

In a statement, the star said,“Las Vegas is like home to me and I can’t wait to feel the energy as we all make our triumphant return to this electric city!”

“Our relationship with Tiësto dates back to the early stages of his career, and the team at Zouk Group is thrilled to continue our support of him with this incredible partnership,” said Andrew Li, Chief Executive Officer of Zouk Group. “Tiësto is synonymous with Vegas and nightlife culture and we couldn’t be more excited to provide him with a brand-new stage to get back to business.”

Dates and ticket information is to be posted at zoukgrouplv.com/tiesto on at 9 a.m. Monday.

Tiësto, whose birth name is Tijs Michiel Verwest, joins Zedd as the first EDM stars announced to headline Resorts World. Both are former Hakkasan Group favorites. There will be Resorts World headliners announced before it summertime opening, which might be by July.

“We’ll have a robust collection of talent at the property. We’re not sticking to just one single source of headliner,” Nicolli says. “We will have different genres of music. But we understand the popularity of EDM, so we went for the biggest stars first.”

He was caught up

“His exact quote was, ‘I was inspired watching your show,’ ” co-producer Angela Stabile said.

We don’t know how this inspiration will manifest, but “X Country” will forever be remembered as the first ticketed show on the Strip to return after COVID, in October. That was an inspirational experience, no question.

Larry Rudolph, the Vegas power player and manager of Steven Tyler and Britney Spears; and his wife, Jen Barnet, are expecting their first child. The couple’s first post of this news was on @jenbarnetmovement’s IG account on April 2. Follow along. They are the cutest.

Cirque du Soleil is reviewing its reopening strategy now that Gov. Steve Sisolak has announced the state is allowed to reopen to 100-percent capacity on June 1. Last month, Cirque President Eric Grilly said the company felt a need to “draw a line in the sand” to open “O” on July 4.

But that line might be brushed clean now that the new June 1 timeline for a full reopening of the state has been established.

A Cirque spokeswoman said the company is evaluating opening dates now based the new information. Grilly has not yet been available for an updated comment or chat about the company’s plans. Cirque CEO Daniel Lamarre, based in Montreal, did offer a statement,

“We were pleased to hear about the new guidelines and are evaluating what they mean for our shows to reopen. We can’t wait to safely welcome our guests, artists, staff and crew back to our theaters in the near future.”

Brian Thomas, long the Lucky the Leprechaun character at O’Sheas, is back with Jen Romas’ “Sexxy After Dark” at Larry Flynt’s Hustler Club on Thursday through Saturday. He’s the also a featured guest emcee in the rolling “Tax Extension 420 Party,” which runs from Thursday through Tuesday. Thomas is wearing a fur in promotional pics. Expect a party.