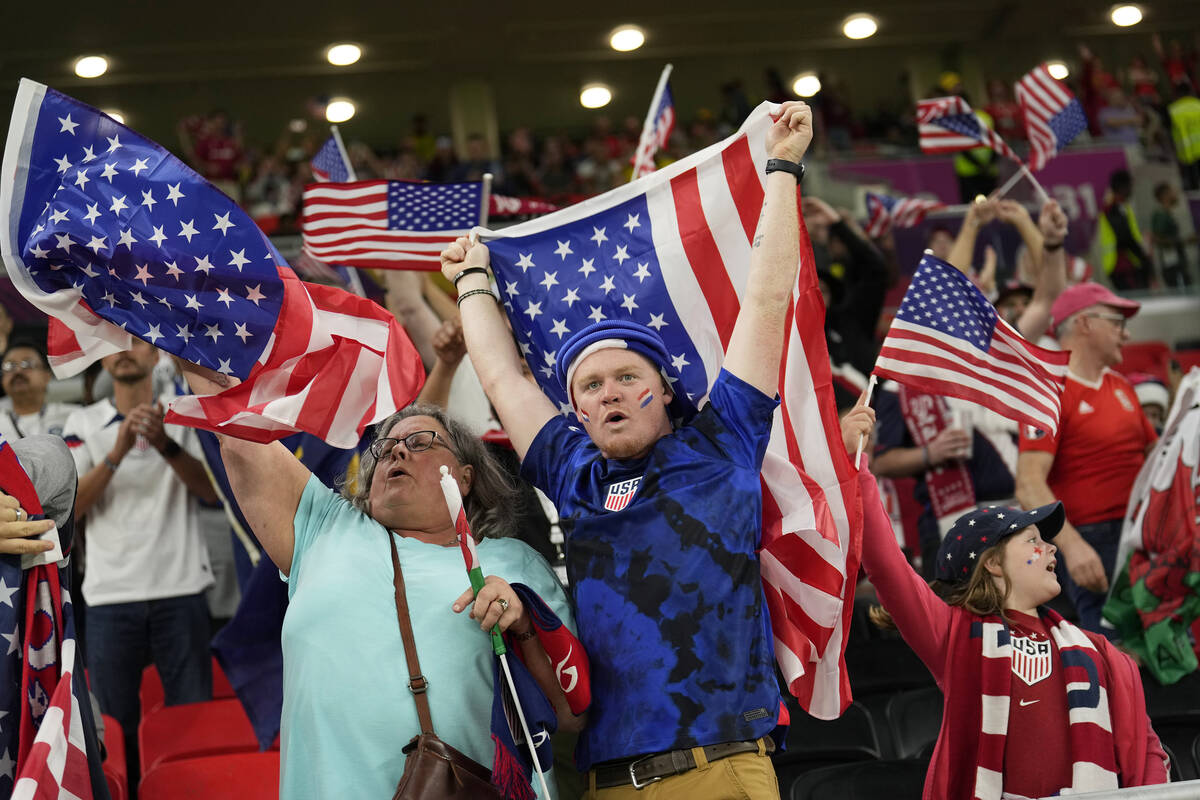 USA supporters cheer at the end of the World Cup, group B soccer match between the United States and Wales, at the Ahmad Bin Ali Stadium in Doha, Qatar, Tuesday, Nov. 22, 2022. The game ended in a 1-1 draw. (AP Photo/Francisco Seco)

Soccer go bragh. Rí Rá Irish Pub in The Shoppes at Mandalay Place is encouraging fans to watch matches in the 2022 FIFA World Cup while choosing from the pub’s menu of draft beers, whiskies, and dishes like Scotch eggs, sausage rolls, lamb burger, shepherd’s pie and steak and chips.

Rí Rá is hosting its viewings of all World Cup matches that air after 8 a.m. Pacific time through the final match on Dec. 18.

Here are five more spots around the valley to take in soccer’s biggest tournament:

From royal weddings to the crowning of English Premier League champions, this British pub packs ’em in for anything U.K.-related. And serves a delightful menu of British faves to boot. Plan on arriving early to find a spot when England takes on the U.S. at 11 a.m. Friday. Visit crownnanchor.com for more details.

Tasty Bavarian fare and giant TV screens: The pairing works beautifully for soccer of any nation, not just Germany. The beer hall and restaurant will open early at 10 a.m. for marquee matches, including U.S. vs. Wales on Monday and England vs. U.S. on Friday. Find more information at hofbrauhauslasvegas.com.

The world’s most popular game meets the self-described world’s largest sportsbook: What’s not to like? Reserve a seat for one of the three-story behemoth’s watch parties at circalasvegas.com/world-soccer-championship.

Here’s another natural combination: Thirsty, throaty soccer fans and a 10,000-square-foot rooftop bar on the Strip that offers more than 100 draft and bottled beers, along with handcrafted cocktails and stadium food favorites. Beer Park will host viewing parties for U.S. vs. Wales and England vs. U.S. Reserve a spot at beerpark.com.

During Team USA and Team Mexico games, all three El Dorado Cantinas are serving specials: $5 street tacos, $14 chicken wings and fries, and $20 Corona beer buckets and pitchers of draft beer. The viewing parties run through Dec. 18, with a special party Nov. 25 at the Sunset Road location featuring Las Vegas Lights FC mascot and the chance to win prizes like a 65-inch Hisense TV.