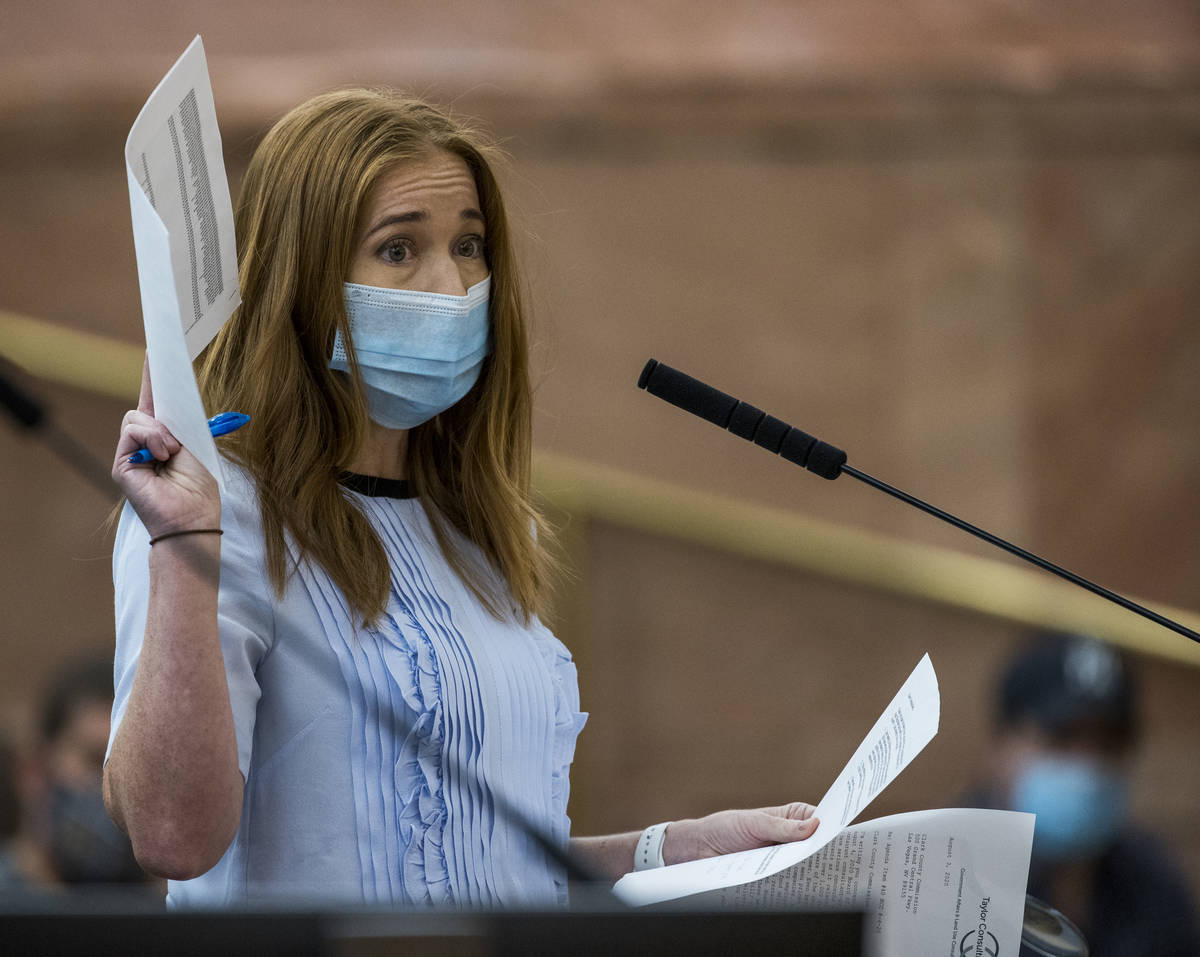 Owner Kristen Corral of Tacotarian, seen here in August speaking to the Clark County Board of Commissioners about delivery fees, is among the Arts District business owners objecting to plans for a new food truck lot. (L.E. Baskow/Las Vegas Review-Journal) @Left_Eye_Images 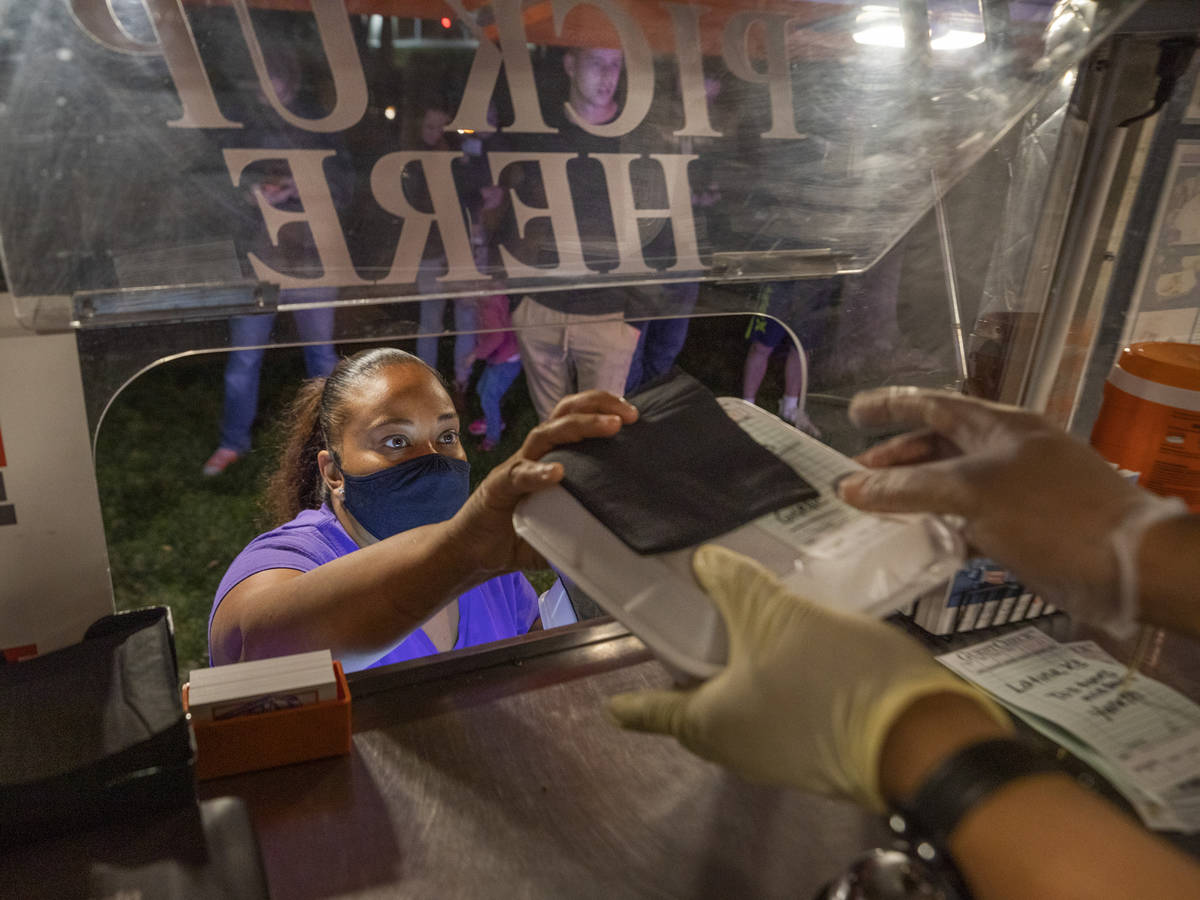 Owner Jinelle Batista picks up a customer order from YourPanadas empanada truck, at Aviata Apartments where the truck is parked, in Las Vegas on Friday, Nov. 20, 2020. (ElizabethPage Brumley/Las Vegas Review-Journal) 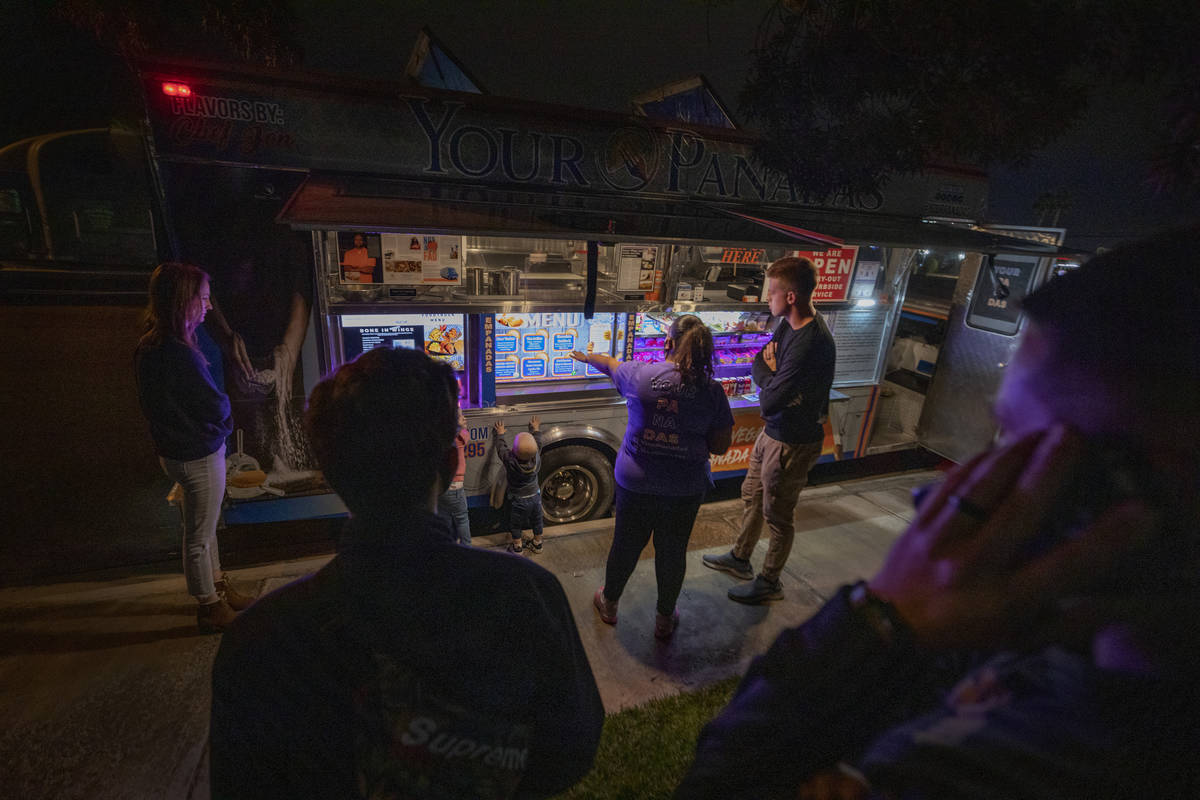 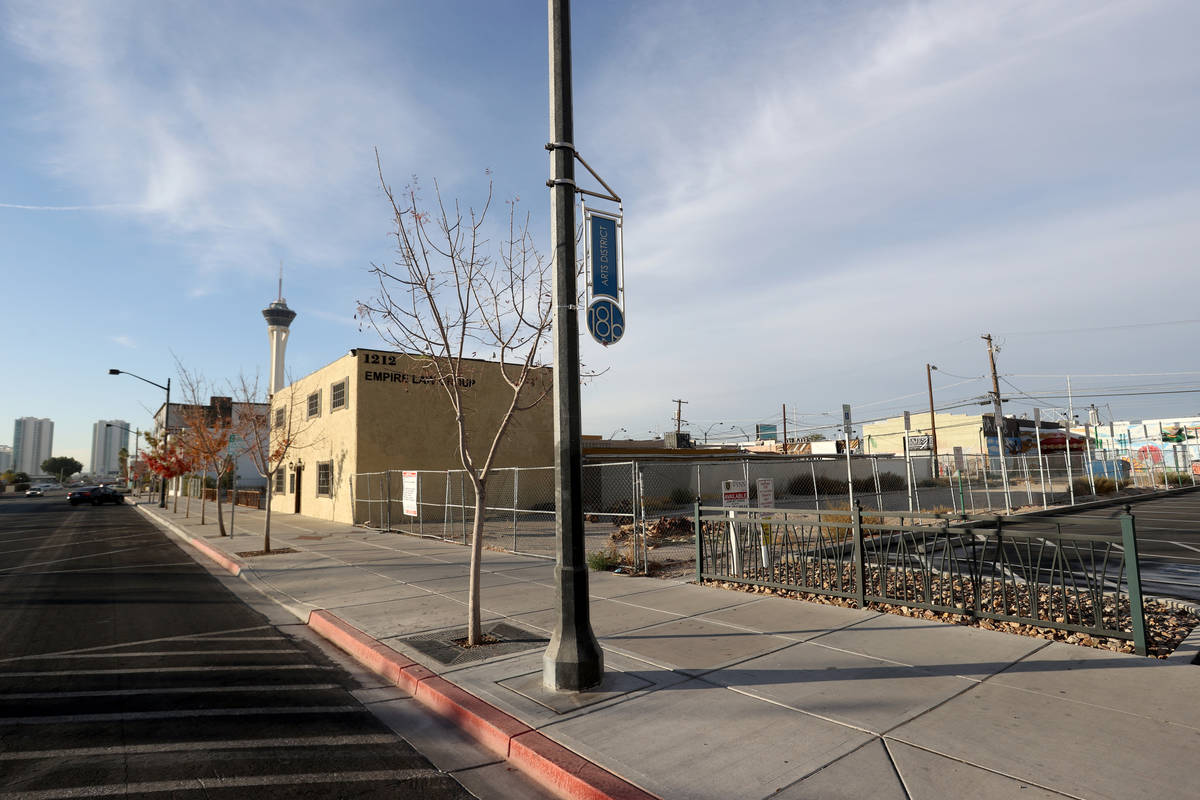 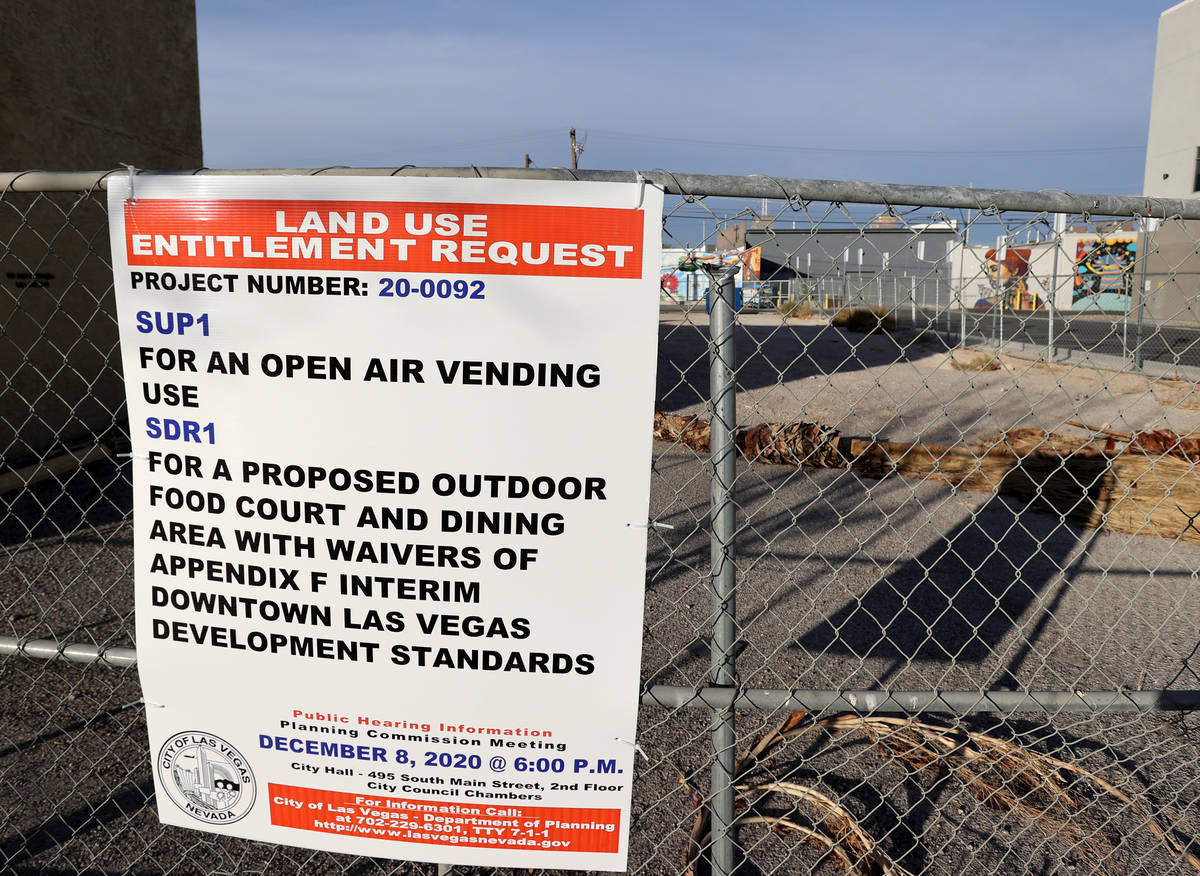 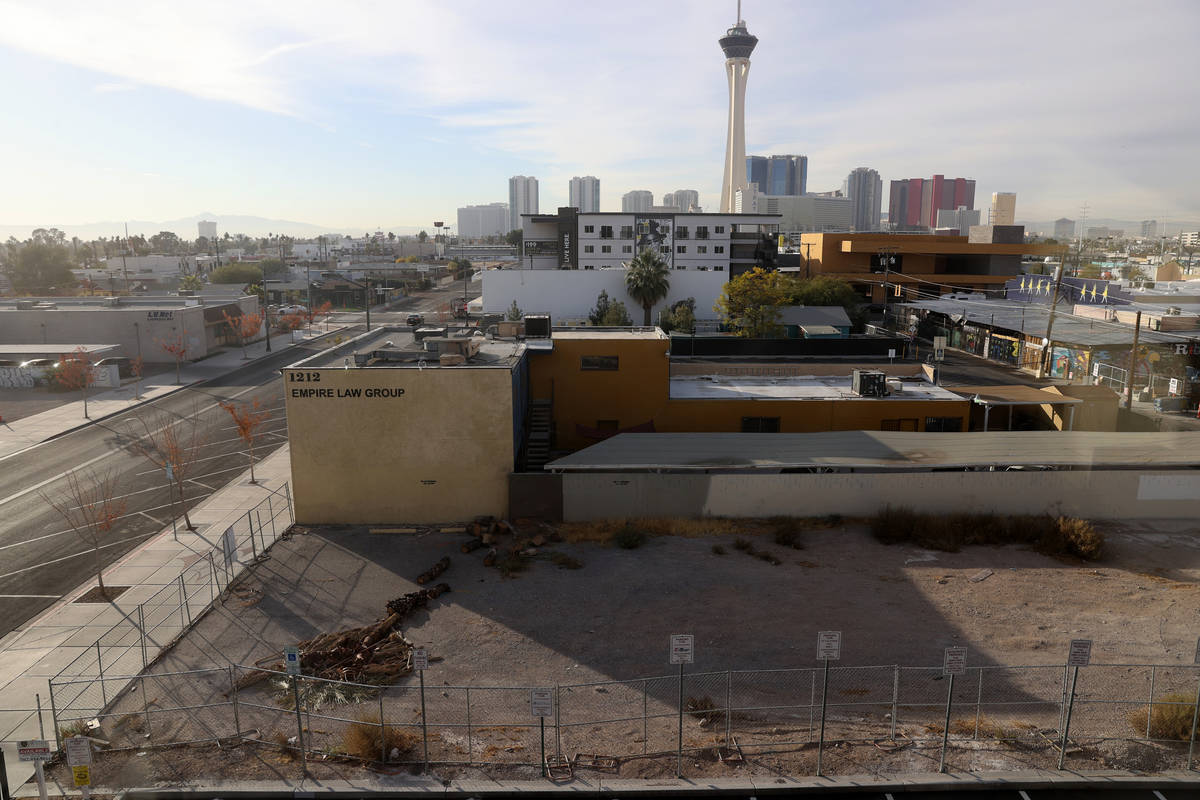 Paul Murad seems surprised by the opposition to the food truck area he hopes to open on a vacant lot in the Arts District. He also questions the motivation of local business people who are raising objections.

“When someone tries to take a dirt lot that creates nothing but vagrancy and trash in the area, and wants to improve it, and in the process provide opportunities for up to 10 small business owners to make a living for themselves and their families, during a pandemic, in the most pandemic-safe way, and the people around it oppose it,” he says, “that to me seems a really wrong way of acting, as a human, and a business owner and a downtown neighbor.”

As president of Metroplex Realty, Murad represents Main Street Investments II, LLC, the owners of a roughly 7,000-square-foot vacant lot on the west side of Casino Center Boulevard just south of California Street. In December, the city’s Planning Commission approved the owners’ request to create an Urban Food Lot that would allow up to 10 trucks to sell their cuisine. While some objections from local business leaders were read into the record at the Dec. 8 meeting, along with emails and live testimony supporting the project, the real opposition didn’t kick in until after its approval.

Chef James Trees, whose restaurant Esther’s Kitchen is less than a block from the lot, says he learned about the project from a story in the Review-Journal, and quickly began going door-to-door with a petition opposing it. The 16 signatures collected were enough to persuade Councilwoman Olivia Diaz to consider an appeal of the commission’s decision, which will be heard by the City Council on Wednesday.

Trees’ objection to the Urban Food Lot is twofold. First the chef argues that Murad’s description of his concept as a ghost kitchen is false. (Ghost kitchens are a growing trend in the culinary world where chefs prepare meals for takeout and delivery only.) Trees also says the project lacks critical infrastructure.

“It’s not a ghost kitchen, because it doesn’t have the facilities of a ghost kitchen — all the different things you need like, dishwashing and what-not,” Trees explains. “They don’t have any of that. It ends up being a place where the landowner is trying to park 10 food trucks with no bathrooms, no hand-washing stations, no electricity, no grey-water dump — all the different things that (restaurants) are required to do.”

The lack of restrooms appears to be the issue that resonates most with local business owners, many of whom say if that were remedied, they would welcome food trucks into the neighborhood.

“People are going to want to use a restroom,” Kristen Corral, owner of the nearby Tacotarian, predicts of the project. “So there’s going to be an influx of people who want to use the surrounding businesses’ restrooms. That means we’re going to have more of a mess, and that’s unfair to our staff.”

While other restaurateurs expressed similar concerns, Murad counters that it’s a smokescreen to cover worries about culinary competition.

“The opposition is using the bathrooms as an excuse because it’s something they think the commissioners can jump on,” Murad says. “When was the last time they were concerned that Dutch Bros. Coffee doesn’t provide restrooms for all the hundreds of people who drive through their drive-through every day.”

As Murad describes it, the first phase of this project will primarily serve members of the downtown community who will take their food home or to a nearby office, and to provide a pickup spot for delivery drivers.

“This is not a park,” he says. “This is not for people to sit down. Therefore no public bathroom is provided.”

He notes that when circumstances change after COVID, the city would need to approve the addition of seating or other amenities. In the meantime, truck operators will be able to use restrooms at a nearby building owned by some of the same investors who own the lot. (Plans call for up to 10 restrooms in the building, although the first two aren’t expected to be available until February.)

While the debate continues, local food truck operators are hoping things will work out. Jonathan Batista, who operates the YourPanadas truck, sent a statement in support of the lot to the Planning Commission meeting, and says he’s still hopeful the parties can find “some kind of compromise” to allow the lot to move forward.

“It would definitely be a game changer,” he says of the lot. “We have so much talent in this town, as far as food trucks, but we haven’t had the support that other cities have.”

On that point, there seems to be little disagreement, even among opponents of the current plan.

“I’m a fan of food trucks,” says Good Pie owner Vincent Rotolo, who has objected to this plan due to “lack of infrastructure.”

“Whoever is responsible for renting the space for food use, needs to have a better plan than what’s (in) that plan I have read. And if they do that, I’ll be the first guy there lining up to buy whatever (food) is there.”

A review of the Planning Commission’s approval is item 54 on the agenda for Wednesday’s Las Vegas City Council meeting, which gets underway at 9 a.m. in Council Chambers at 495 South Main St. Cox Cable customers can watch it live on Channel 4.