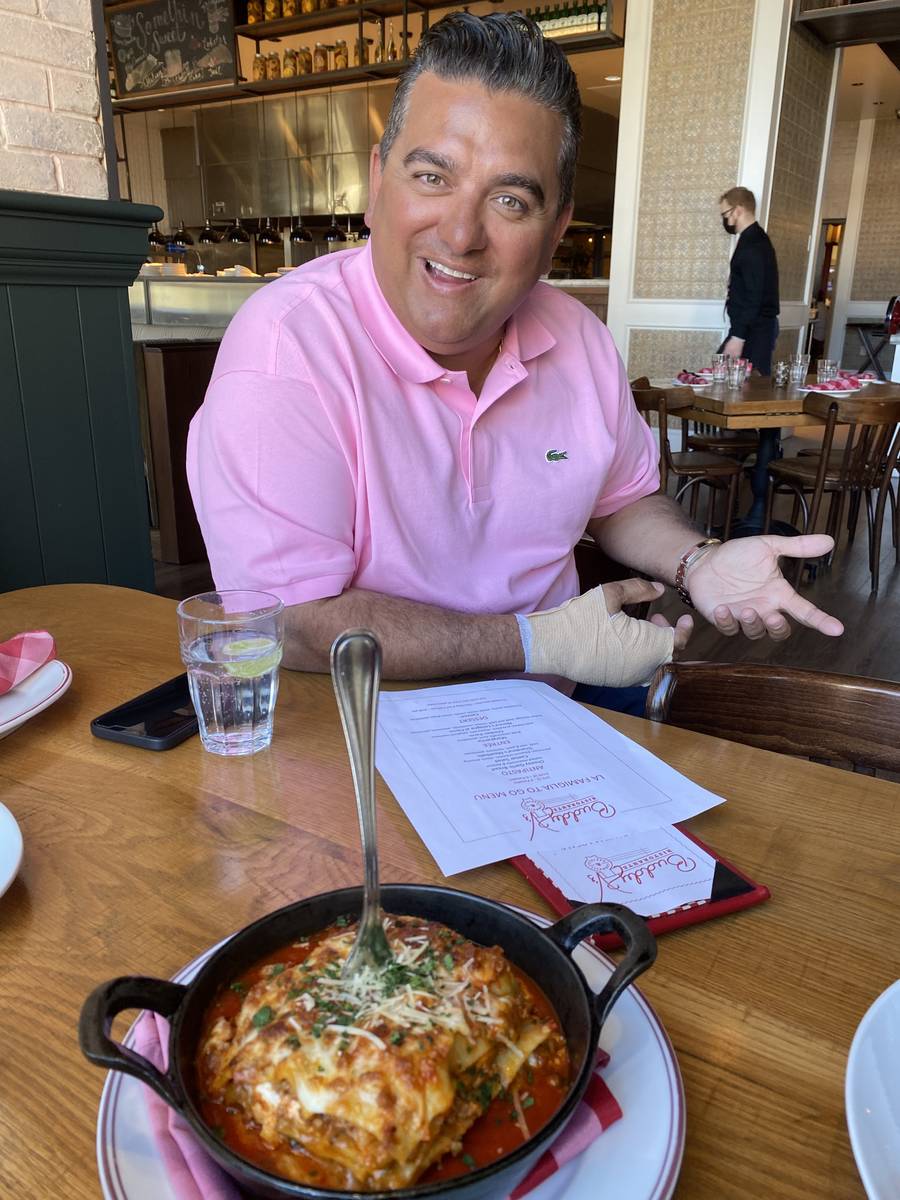 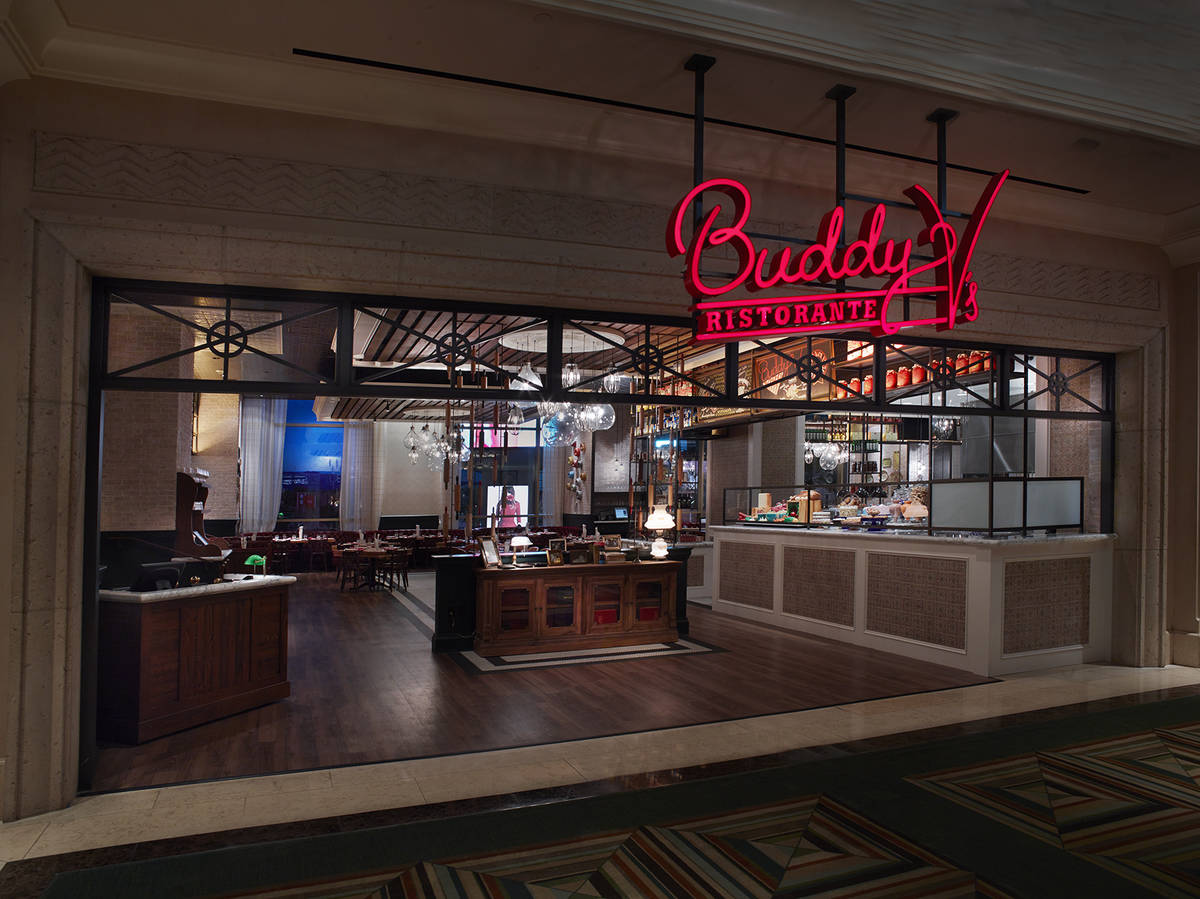 Buddy Vs Ristorante in The Grand Canal Shoppes. (Bill Milne)

“To be able to come out here, and actually see life, and see people get back to normal, enjoying the restaurant and enjoying Vegas, (I’m) teary-eyed,” the “Cake Boss” star reflected on Wednesday, seated at Buddy V’s Ristorante in The Grand Canal Shoppes. Through the windows, he could watch the people standing in a socially-distanced line to purchase treats from his other Venetian/Palazzo business, Carlo’s Bakery.

“I’ve been taking a lot of pictures with fans,” Valastro said of the crowds that have continued to flock to the celebrity chef’s local establishments. “I’ve been doing it with my mask on, you know. I’m vaccinated, so I feel a little bit better, and I do a lot of hand washing and sanitizing. But I’m trying to be as normal as you possibly can during a pandemic.”

In this semi-private setting, with a member of the media who also has been vaccinated, the celebrity chef is also excited to shake hands — for a very different reason.

“Look, I can make a full fist, I can go fully straight, and I’ve got my strength,” he says, clenching and unclenching his bandaged right hand, before extending it to grasp mine with a firm grip.

“I got so frigging lucky,” Valastro continues, referring to his recovery from a freak bowling alley accident in September, which has forced him to undergo four surgeries and an intense physical therapy regimen to regain most of the movement and feeling in his hand. The accident itself, however, was anything but lucky.

“I was trying to fix my bowling alley, in my house,” Valastro explains of the incident. “I have a pin setter, and it was stuck. I went back there, and I dozed off for a second, and it caught my hand between a fork, and it just went ‘Boom!’ It blew through my hand, and then it rolled it.”

Valastro’s son was forced to cut him free from the machine with a power saw so they could drive him to the hospital with a metal spike still piercing his palm.

“It was like a solid piece of metal — probably like seven or eight inches (long), and it had to be at least an inch in diameter,” Valastro says of the piece that impaled him.

The road to recovery

The accident occurred in September, months after COVID-19 had forced him to cancel a trip to Las Vegas to celebrate the official grand opening of his Harrah’s restaurant Pizza Cake. He’d just finished filming the Food Network’s “Buddy vs. Christmas” series. And while much of the dining world had shut down, the chef and his family had been scrambling to personally fill online cake orders from their Jersey City factory.

“Everybody in my factory, with this fear of COVID, didn’t’ want to work,” he explains. “And we were getting thousands and thousands of orders. So I took my wife, my kids, my nieces, my nephews, and we all ran the factory and took all the orders for like three months until the employees felt comfortable coming back to work.”

Even after his accident, Valastro returned to work with his family in the factory as he awaited his surgeries. As time went by, he began to worry whether he’d ever fully recover.

“Bad hand and all, bandages on, I’m taking racks out of the oven. I’m making lemonade out of lemons, because that’s the way I’m built. But when I really had time to think about it after the holidays, I said to my wife, ‘You know I’m just not the same.’ Because even just holding a knife, or holding a brush, I couldn’t grab it. And you don’t realize how important things are, until something happens.”

It wasn’t until the new year, when his doctor removed his bandages after a surgery, that he began to feel more confident.

“She said ‘All right, make a fist,’ and I made my fist. And I started crying, because I was like, my hand is back, and I had strength in it.”

Today Valastro is confident in his own recovery as well as Las Vegas’ ability to bounce back quickly from COVID. On the personal front, he’s preparing to begin filming a new season of “Buddy vs. Duff” in April. Locally, he’s preparing to launch a dozen cake-slice vending machines at locations on the Strip “in the next four or five months.” And at Buddy V’s, he’s offering a pair of specials just for local residents with a Nevada ID.

“I just want to thank the locals for always supporting us and always coming back,” Valastro says of the offers.

For those who are ready to dine indoors again, Buddy V’s is now offering a three-course prix fixe Mi Familia Locale menu every Tuesday night for $30.95. Those who are reluctant to dine out can pick up family style La Famiglia To Go dinners in two sizes ($75, feeds 2 to 4 people; $125, feeds 4 to 6), delivered to their car by The Venetian’s former Barney’s valet, every Monday through Thursday from 5 to 8 p.m.

The Review-Journal is owned by the family of Sheldon Adelson, the late chairman and CEO of Las Vegas Sands Corp., which operates The Venetian and Palazzo. 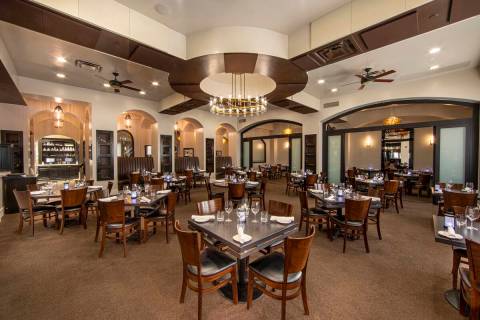