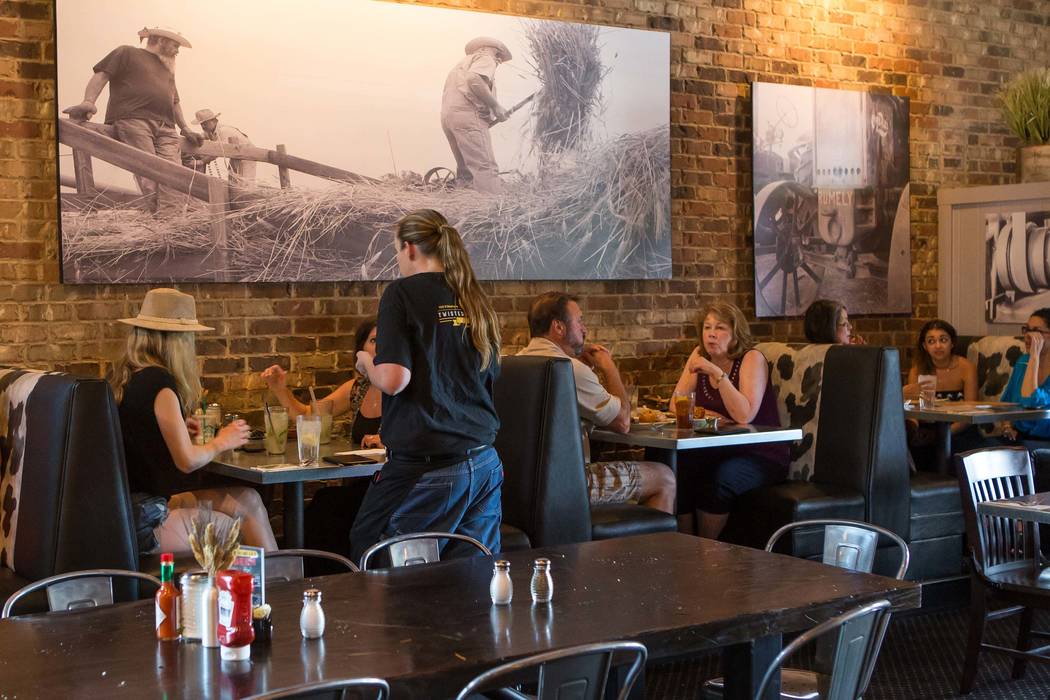 If you’ve dined at Hash House A Go Go, you know the portions are huge. And not everyone wants to leave a restaurant with a stack of to-go containers.

“We’re really changing up the menu a lot, based on what Vegas wants,” said Brannon Rees, director of marketing for Hash House A Go Go, which is marking its 15th year in the Las Vegas Valley. “We listen to our customers; we’ve got a pretty good hold on social media. We’re known for our generous portions, but we’ve learned that people like to come in and get finger foods as well.”

Rees said the menu revisions include 15 items such as Elvis pancakes with chocolate and peanut butter, seasonal pumpkin pancakes, a barbecued chicken sandwich, a spicy grilled chicken sandwich, a barbecued bacon cheddar burger and Not Your Mom’s Deviled Eggs, which he described as “a little sweet, a little spicy, stuffed with habanero-egg filling and topped with candied bacon.”

“And a whole bunch of different styles of Buffalo chicken wings, which is very different for us,” he said.

Additions to the dinner menu, Rees said, include shrimp scampi, steak and a pot-roast dinner.

Among the new beverages is one named for the original Hash House A Go Go location in the Hillcrest section of San Diego. The Hillcrest Bloody Mary is made with jalapenos, stuffed green olives, green beans, fresh horseradish and black pepper — and, like other Hash House drink options, the customer can keep the glass. Other new beverages include tangerine and blood orange mimosas.

“It definitely falls into the category of what we’ve always kind of done,” he said.

Rees said the first restaurant, which opened in 2000, still is operated by the original owners, executive chef and co-founder Andy Beardslee and co-founder Johnny Rivera.

“Andy grew up in Indiana,” he said. “He was the one that learned to cook from his mom. He turned that into his own twist. Johnny, who’s a Californian, came in and they twisted things up a bit and came up with Twisted Farm Food,” the stated mission of the chain.

Rees said his father, Jim Rees, and partners Jim Nyberg and Bill Underhill bought the concept and rights for the rest of the United States and in 2005 opened their first Las Vegas restaurant at 6800 W. Sahara Ave. It was followed by locations at The Linq, Rio and Plaza and at 555 N. Stephanie St. in Henderson, and sister spots in Reno; Orlando, Fla.; at Mohegan Sun Casino-Resort in Montville, Conn.; and in St. George, Utah, about a year ago. A Summerlin outpost, at 10810 W. Charleston Blvd. — replacing Islands Fine Burgers and Drinks in the Canyon Pointe shopping center — is expected to open in July and is the only one in the plans right now.

“Once we hire for Summerlin, we’ll have over 700 employees nationally,” he said.

Rees said the company continues its commitment to philanthropic causes, such as Tuesday’s observance of National Pancake Day, during which $1 from every order of specialty pancakes sold (except at the Rio location) will be donated to Hearts Alive Village, a local animal rescue.

“We’re involved with hundreds of charities across all markets, involving every type of charity you can imagine,” he said. “We like to dig in and find the local charities.”