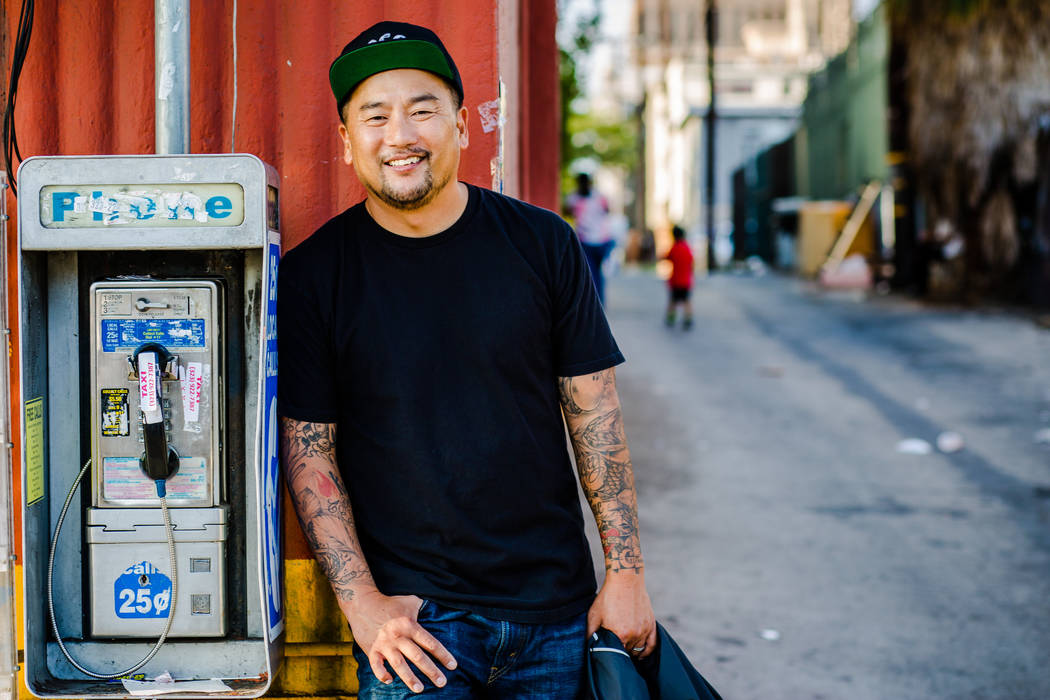 It was, however, displayed. The menu for Best Friend, set to open Dec. 19 at Park MGM, is bright yellow, in a loose-leaf binder. Saying he wasn’t sure how much he was permitted to announce Wednesday, Choi flipped through it, pointing out the old photos interspersed with food listings.

“I hope it makes you laugh,” he said.

That remains to be seen, but the half-hour live spot did no doubt make viewers hungry, as Choi prepared four dishes for a Best Friend sneak preview.

As the Tamarind Cod Hot Pot (with cabbage, jalapenos, bean sprouts, green onions and seasoning in addition to the fish and lots of tamarind glaze in what Choi said is a reflection of his love for Vietnamese food) bubbled away on top of the stove, he worked on the “creamy, spicy, pungent chile sauce” for the Slippery Shrimp, an homage to Los Angeles’ Yang Chow restaurants.

“It’s kind of like being a dog sitter,” he said of watching the two dishes at once. “They’re kind of going all over the place.”

He tossed tempura shrimp in the sauce and added cilantro and sesame leaves, sesame seeds and walnuts.

“I guess it’s kind of like honey-walnut shrimp,” he said. “In a different way.”

That sort of digression is characteristic of Choi.

It was, he said, just their third day in Best Friend’s kitchen, a classic style with large work island, open so “everybody can see each other.” Choi himself has returned to the classic chef’s whites he hasn’t worn for 10 years.

He finished the braised dish with vinegar and vermicelli, more bean sprouts, cabbage and herbs, saying he likes to use a lot of herbs “to bring the freshness right at the end.”

As executive chef Diego Echevarria, whom Choi brought from Los Angeles, put the finishing touches on a sizzling platter of barbecued spicy pork, Choi made a fried bologna sandwich, layered with mustard, pickles, Swiss cheese and mayo and pressed.

“I don’t know why I’m doing a bologna sandwich in Las Vegas,” he said, but then seemed like he did.

“That’s the 420 right there,” he said as he placed it on the chef’s table with the other dishes, before he and the staff sat down to eat. A colorful patchwork of tile provided the backdrop; nearby was the kimchee refrigerator, “almost like a dry-aging cooler” but dedicated to the Korean fermented cabbage. Two other dishes were added: Fritto Misto Rodgers with ponzu sauce, and the vegan Soon DuBu.

“This is a place where you come to have fun,” he said.

The Dec. 19 opening will be a soft one, he said, with a grand opening set for Dec. 28. In between, he acknowledged, there may be a few rough spots, and said feedback will be appreciated.

“Don’t go right to Yelp and give us one star,” he said.

Initially, dinner will be served from 5 p.m. to midnight daily, although he said the closing hours may go later if there’s enough demand. And lunch may be on the horizon; “in my mind, we built this place to be open 24 hours.”

“This is a town that’s seen everything,” he said. “To get the excitement that’s been buzzing around Best Friend is really humbling.