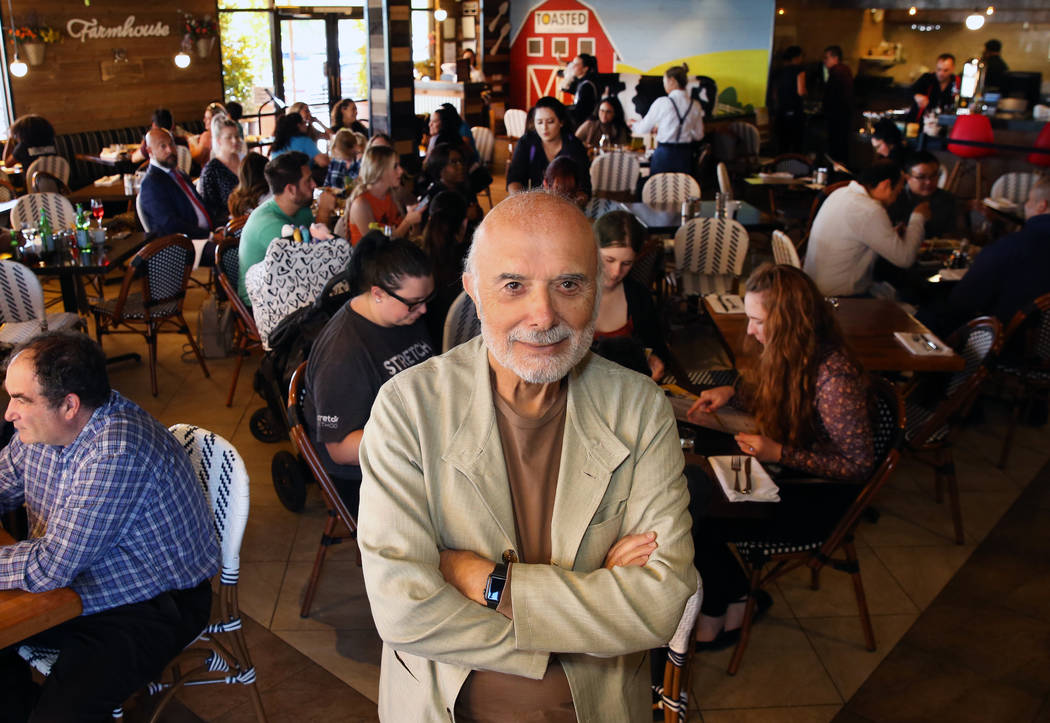 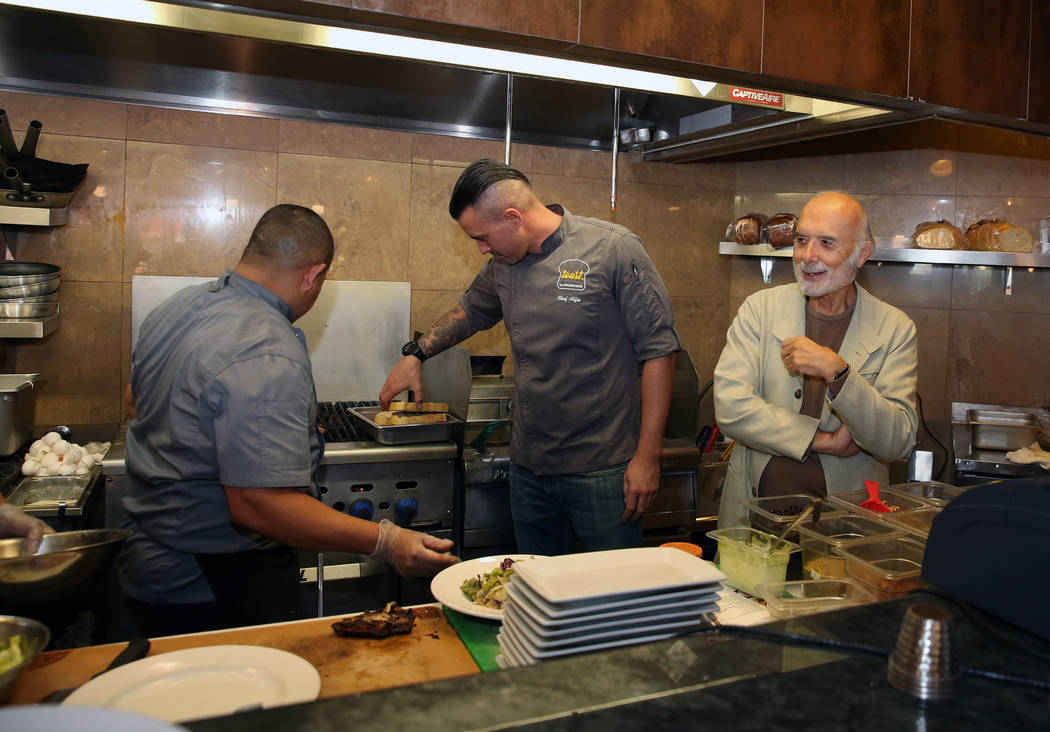 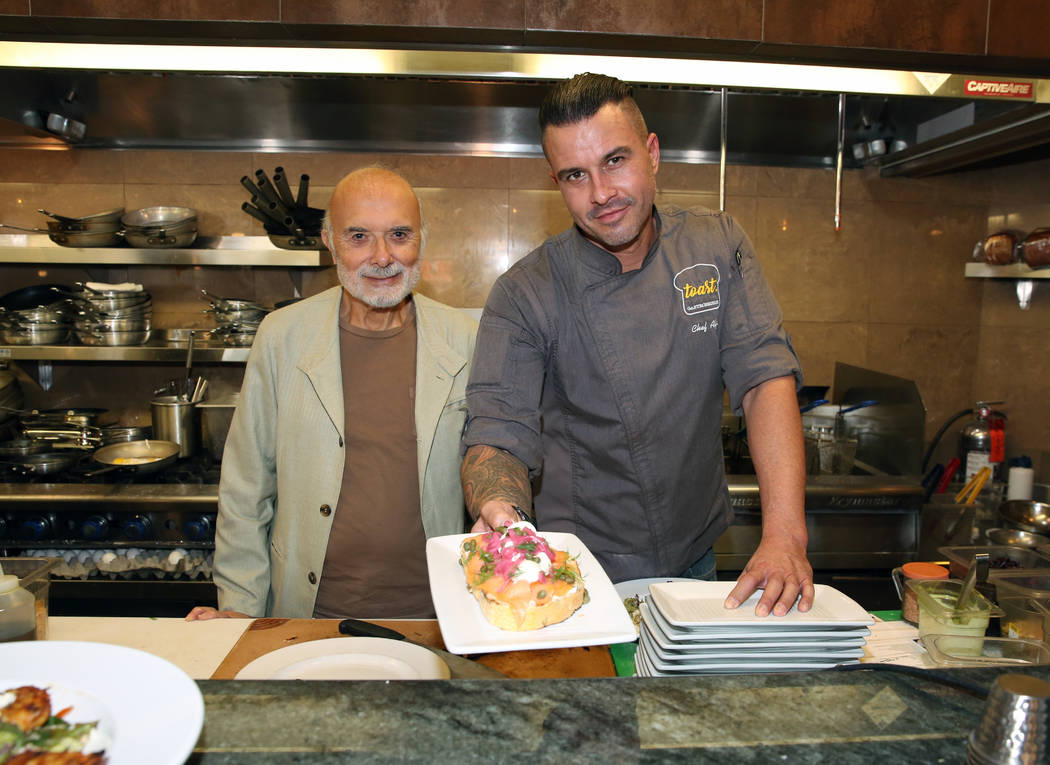 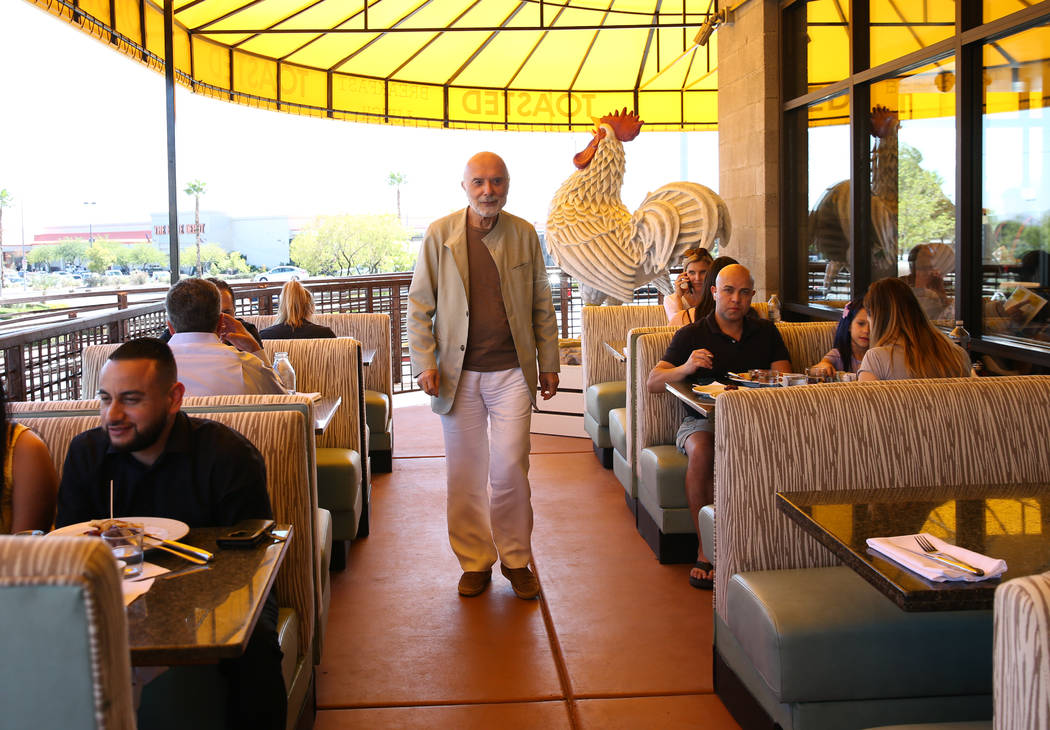 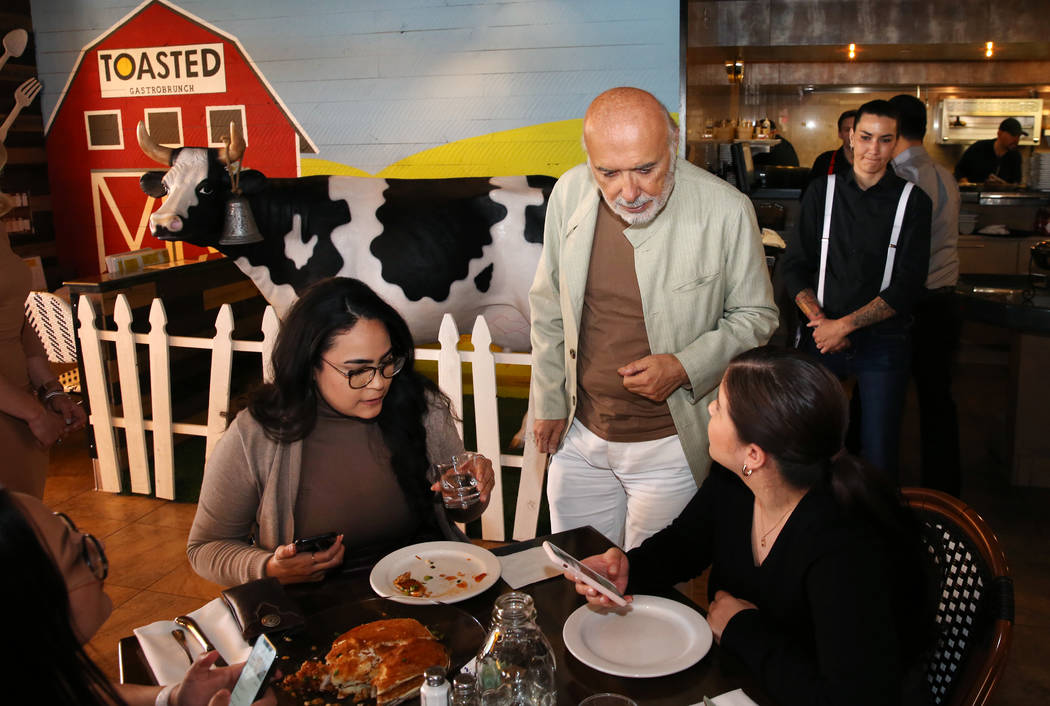 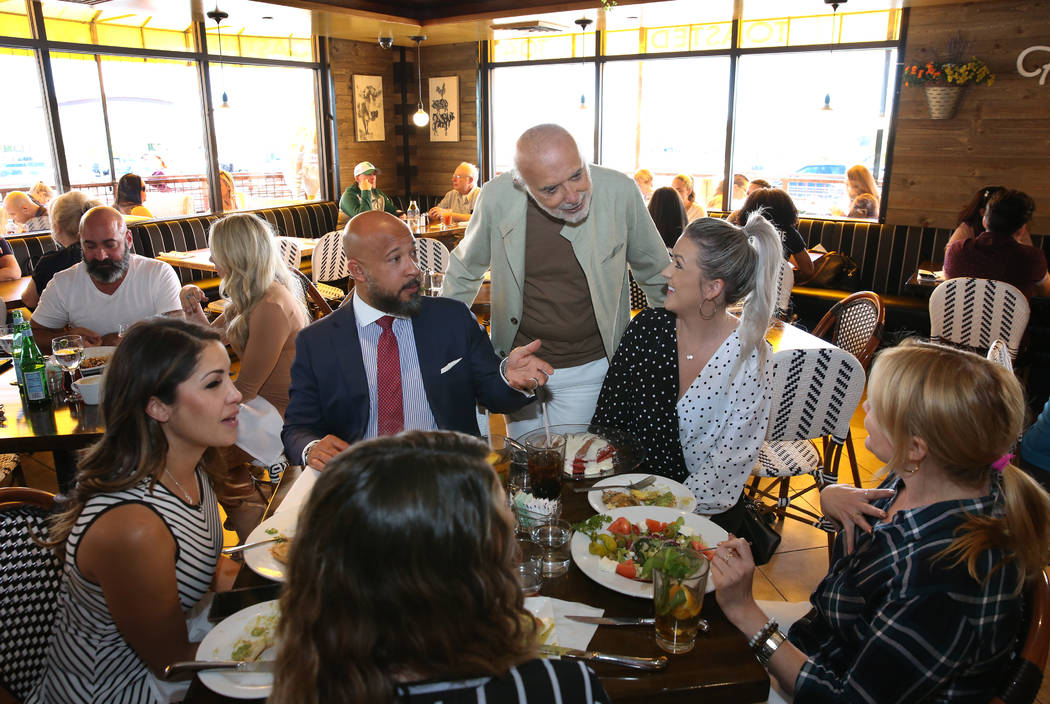 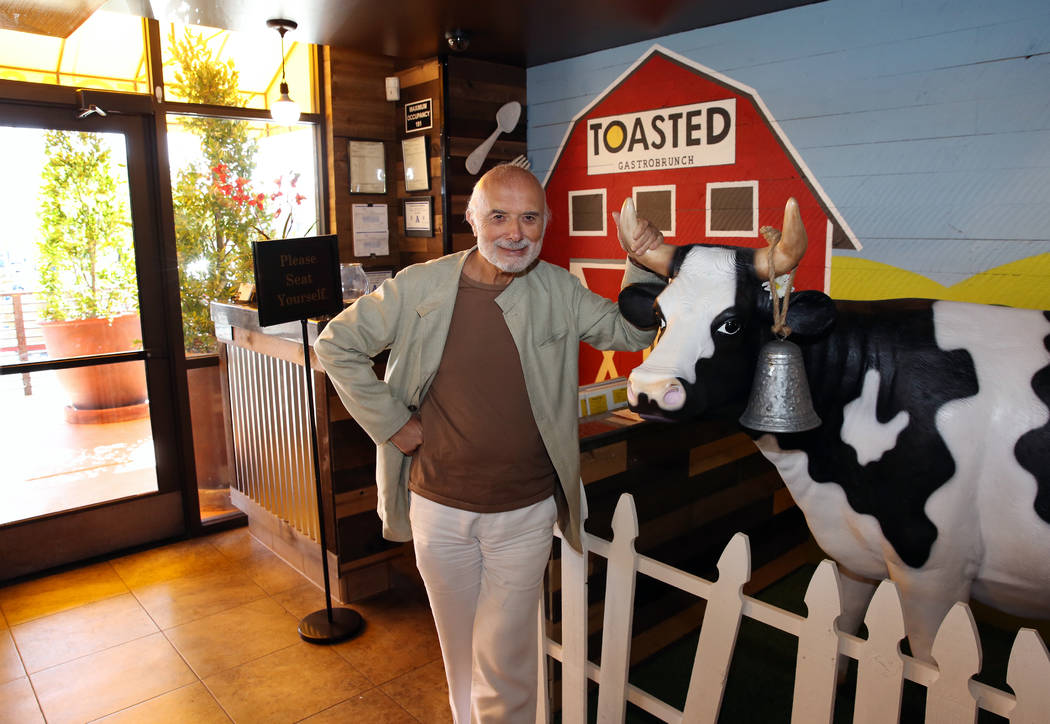 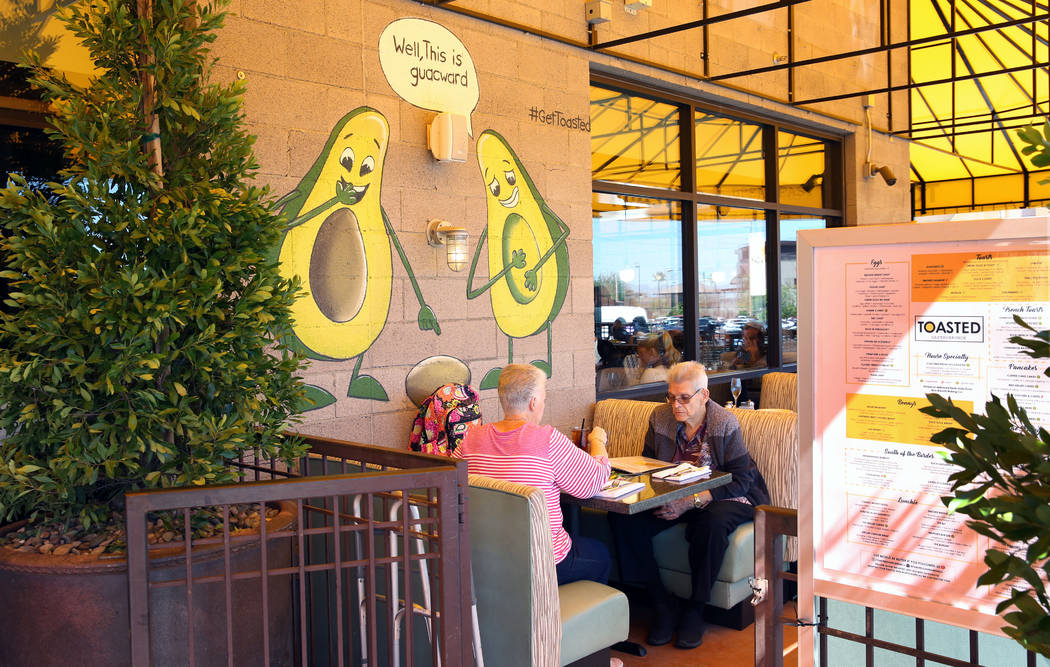 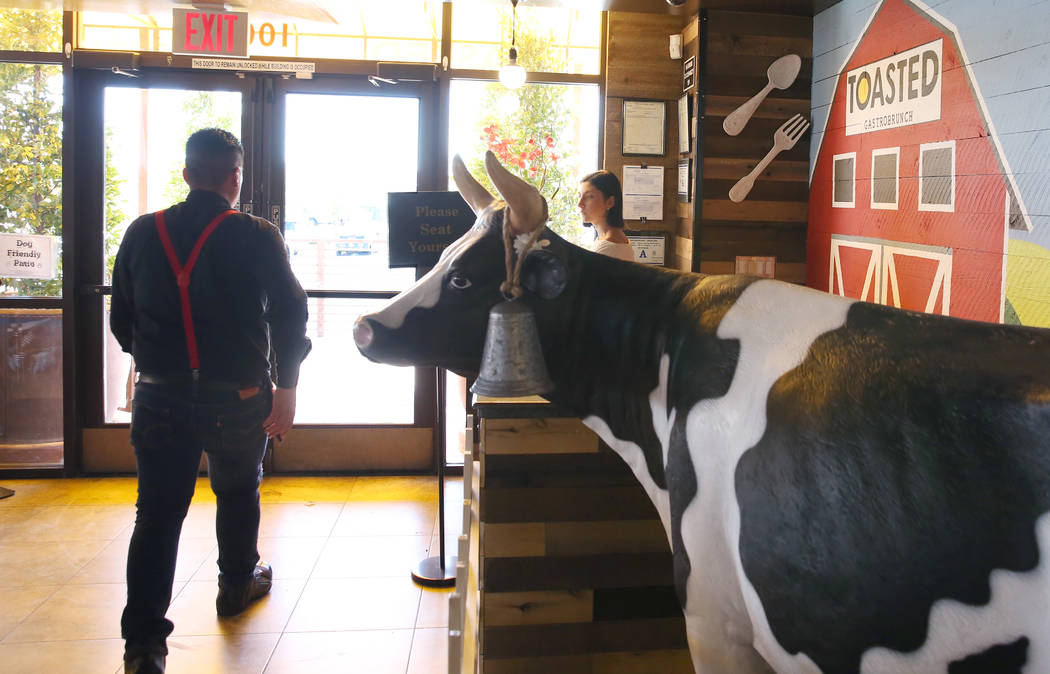 A hostess, right, watches as a waiter carries out food to serve on the patio at Toasted Gastrobrunch at 9516 W. Flamingo Road photographed on Thursday, Oct. 3, 2019, in Las Vegas. (Bizuayehu Tesfaye/Las Vegas Review-Journal) @bizutesfaye 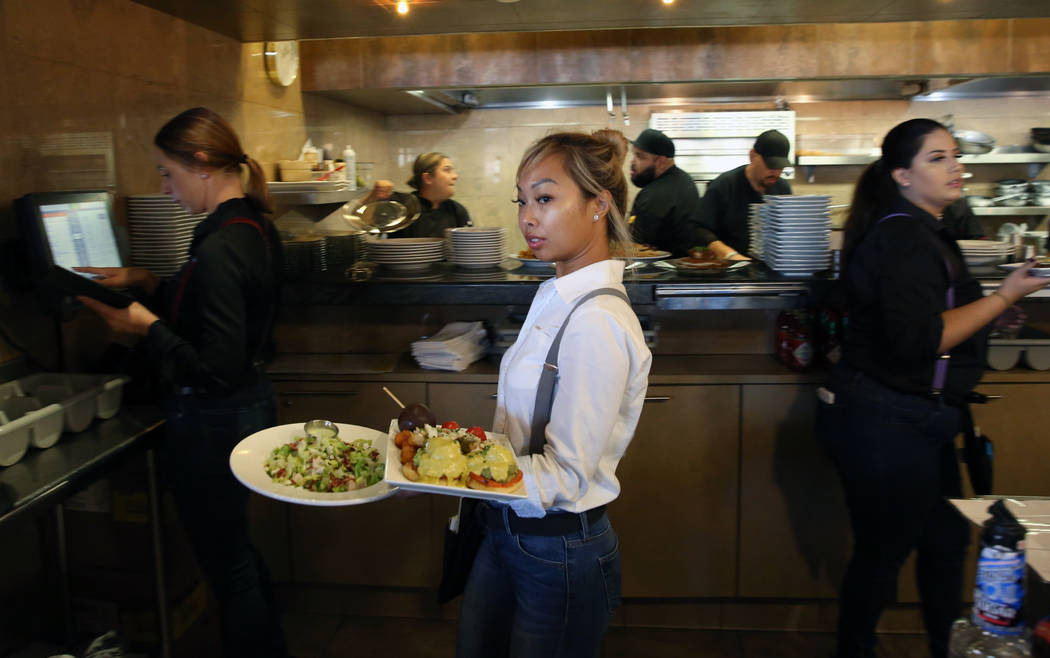 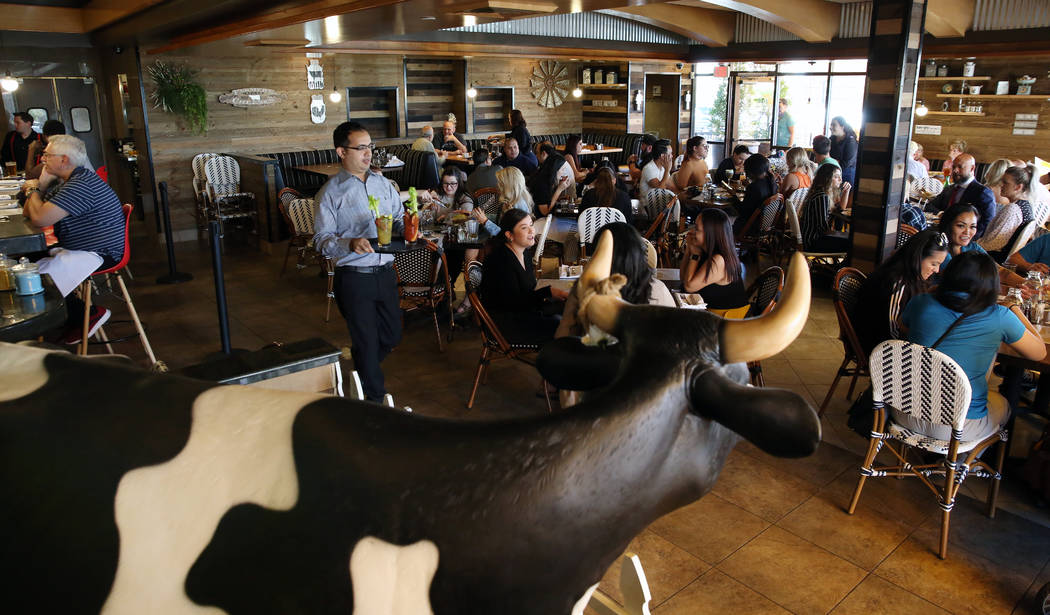 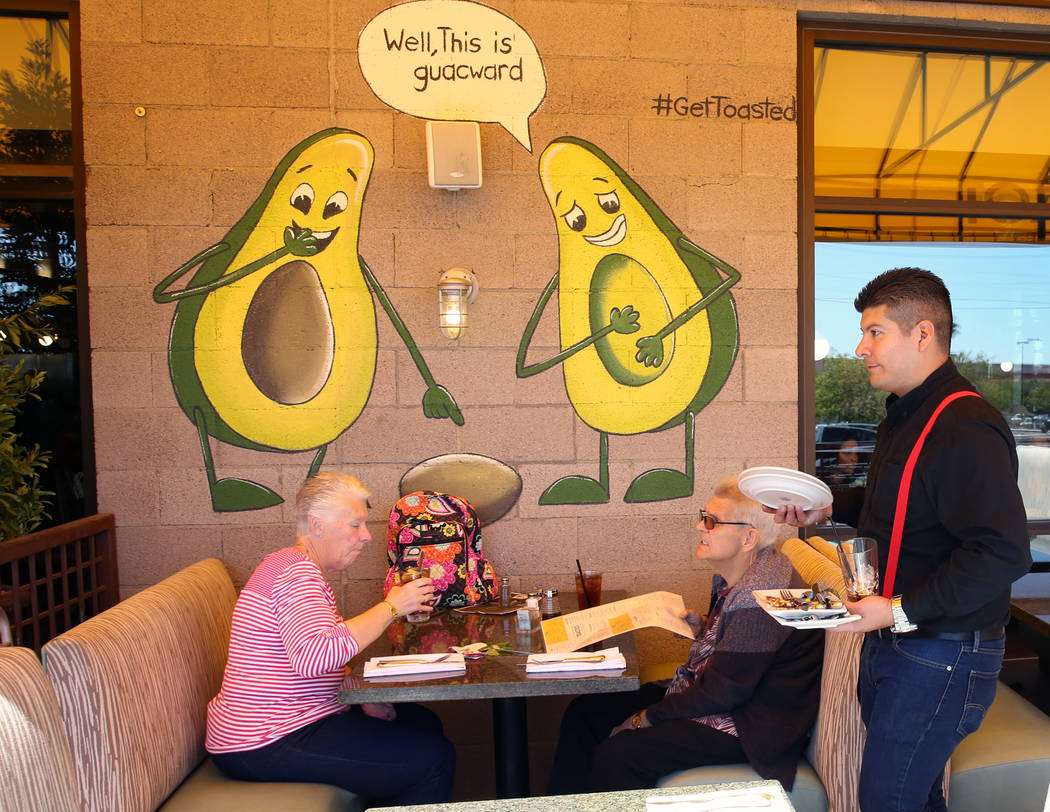 Sami Ladeki is an American success story with some uniquely Las Vegas twists. The founder of Sammy’s Woodfired Pizza was born in Lebanon and educated in Germany. He came to the U.S. in 1968 for a job at New Orleans’ Royal Sonesta Hotel, which was interrupted in 1969 when he was drafted into the U.S. military for two years.

Ladeki, who operates restaurants in California and Las Vegas and lives here, came to town in 1977 to serve as food and beverage manager at Caesars Palace. And some of his stories about those days have enough colorful Las Vegas flair that he will only tell them off the record, without a recorder running. But sitting in the dining room of his new Flamingo Road brunch spot, Toasted Gastrobrunch, during practice service for “friends and family,” he had plenty of thoughts to share publicly about the city’s past, present and future, as well as his own.

Review-Journal: Your first taste of American life was New Orleans, which is an entertainment and hospitality city. Did that prepare you for Las Vegas?

Sami Ladeki: In New Orleans, you can drink alcohol 24 hours. You can walk on the street drinking alcohol. And Bourbon Street, where the hotel was, there were all the nightclubs. On one side was Al Hirt, the saxophone player, and Pete Fountain the clarinet player. And then, when I was there we hired Louis Prima and the Witnesses. What a fun guy. I got to be friends with him and his people. So I agree with you.

You came to Las Vegas in 1977 to work at Caesars Palace. What was the city like in those days?

Those were the good old days when everybody would come to Caesars. I was a celebrity just going out on the streets and going into places. They’d say “You work at Caesars Palace? Oh my God!” It was a big deal, Caesars Palace. They had all the fights. And the tennis (player), Pancho Gonzales, he was there. And it was amazing the shows we had, from Shirley MacLaine to Tom Jones to Johnny Carson, Paul Anka, all the biggies.

At Caesars we had the Bacchanal. It was all the Roman food. The crème de la crème was the Palace Court. All the big shots came in. Everything was French service. We used to get the silverware, and I used to ship it to New York to dip it in gold and send it back. It was extravagant at that time. And the other one was Ah’So, which was also a famous restaurant. It was the best Japanese restaurant in Las Vegas. Caesars was known for its good food.

After leaving Las Vegas, you started Sammy’s in La Jolla in 1989. What was the inspiration?

When I was in California, I started going to Spago. So the inspiration was Spago. And when I decided I was going to do it, in ’88, I went to this place where they sell (pizza ovens) and asked, “If I buy the oven, can you show me how to use it?” And he said, “Yeah, I have two guys here who consult.” One was Ed LaDou, who was the chef at the pizza station in Spago. So I called Ed, and … he designed the whole menu.

Your new restaurant Toasted Gastrobrunch, like your San Diego spot Toast Gastrobrunch, only serves breakfast and lunch. What inspired that?

The high cost of labor in California. It’s terrible. And then the San Diego labor market. They’re all kids. Turnover is high. The only stable thing you have is the kitchen labor. But the front of the house, they’re not professionals. … With all of that stuff blowing up, in California these breakfast places are growing everywhere. And somehow the dinner business is becoming terrible. What happens is, when they raise the minimum wage, and they raise the taxes on you, you raise the prices and the consumer doesn’t realize that.

Do you plan to open more Toasted Gastrobrunch locations in Las Vegas?

I would like to, but I want to see how it works (first). It’s a very different menu, in my opinion it’s different from other restaurants.

For a good breakfast, you’ll drive a mile. And if you’re a businessman, you’ll come in here and it’s a nice business atmosphere. It’s completely different from a regular coffee shop. I don’t want to deal with doughnuts and croissants and all that.

It’s been 40-plus years since you first saw Las Vegas. How does it compare?

It was the best in the country at that time because all of the hotels — from the Sands to the Desert Inn —had good food. There were chefs here, some German, some French, we used them all. But I can’t even compare it to what I see now.