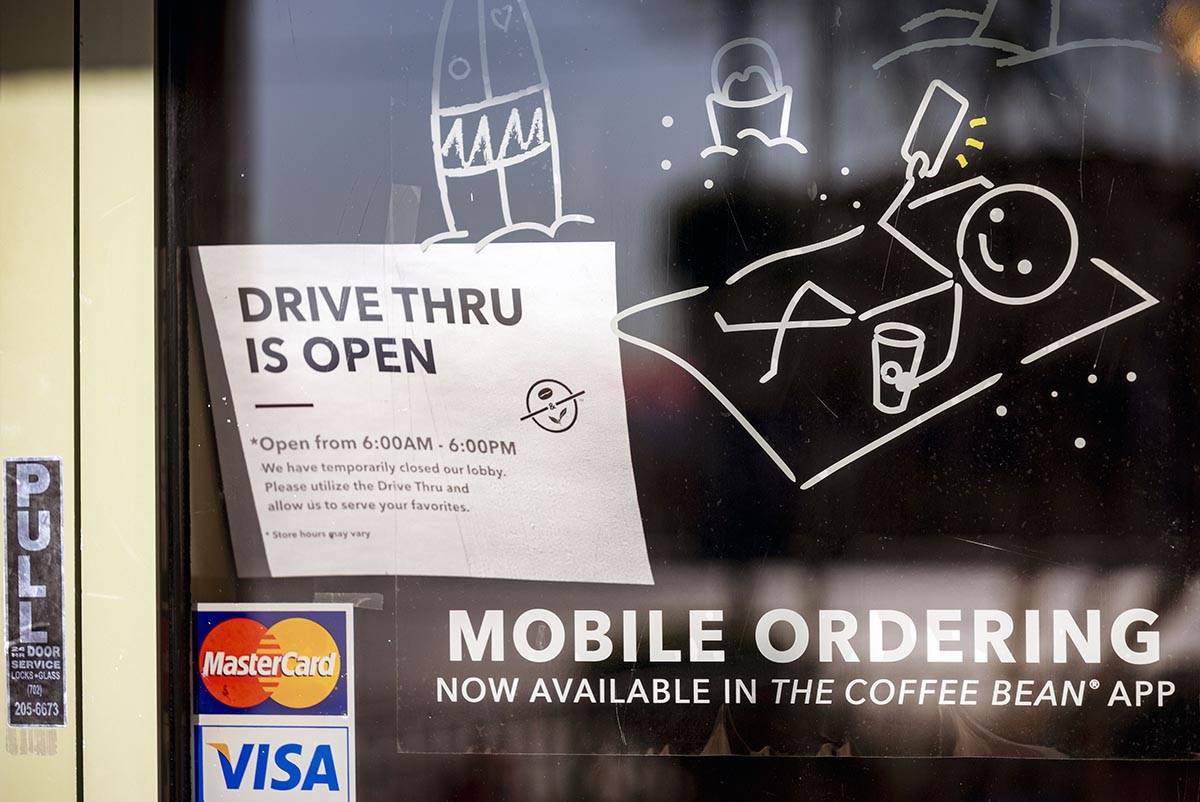 A sign is seen hanging on the door of the Coffee Bean & Tea Leaf at 6115 S Rainbow Blvd., advertising a mobile app and that pickup service is available, in Las Vegas on Wednesday, April 15, 2020. (Elizabeth Page Brumley/Las Vegas Review-Journal) 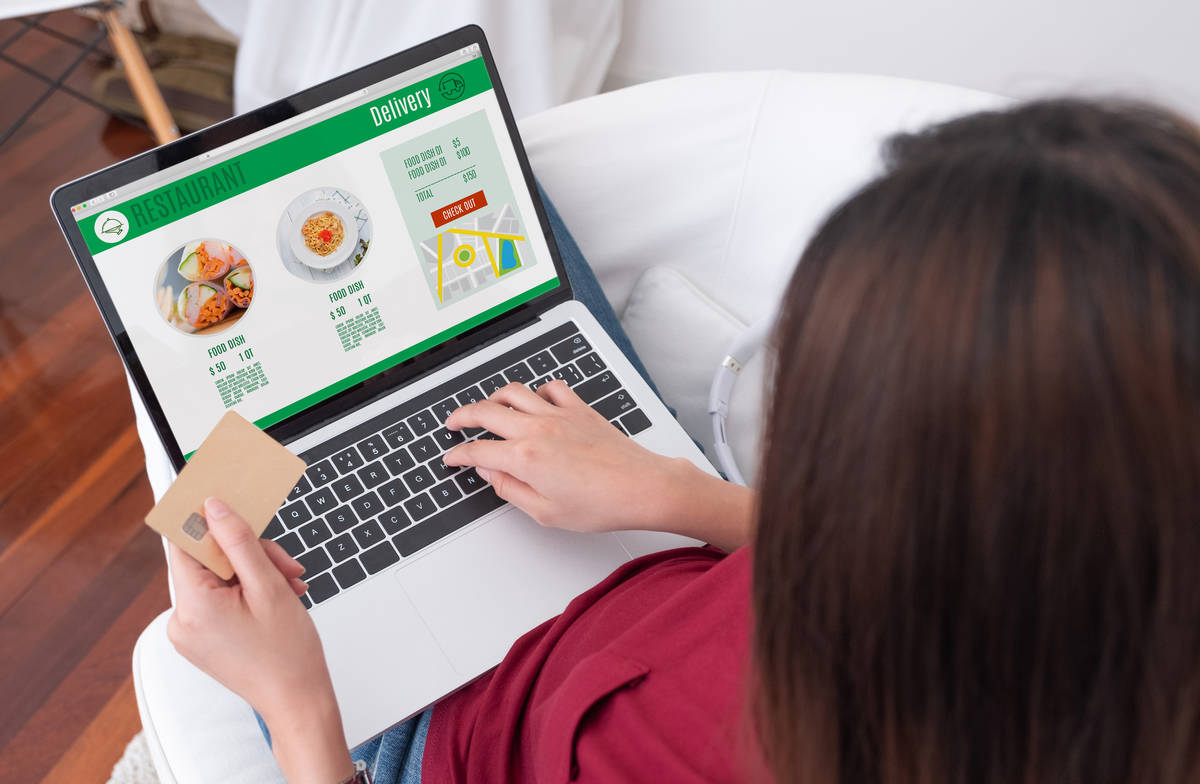 Ordering food for delivery has ramped up during the coronavirus crisis. (Getty Images) 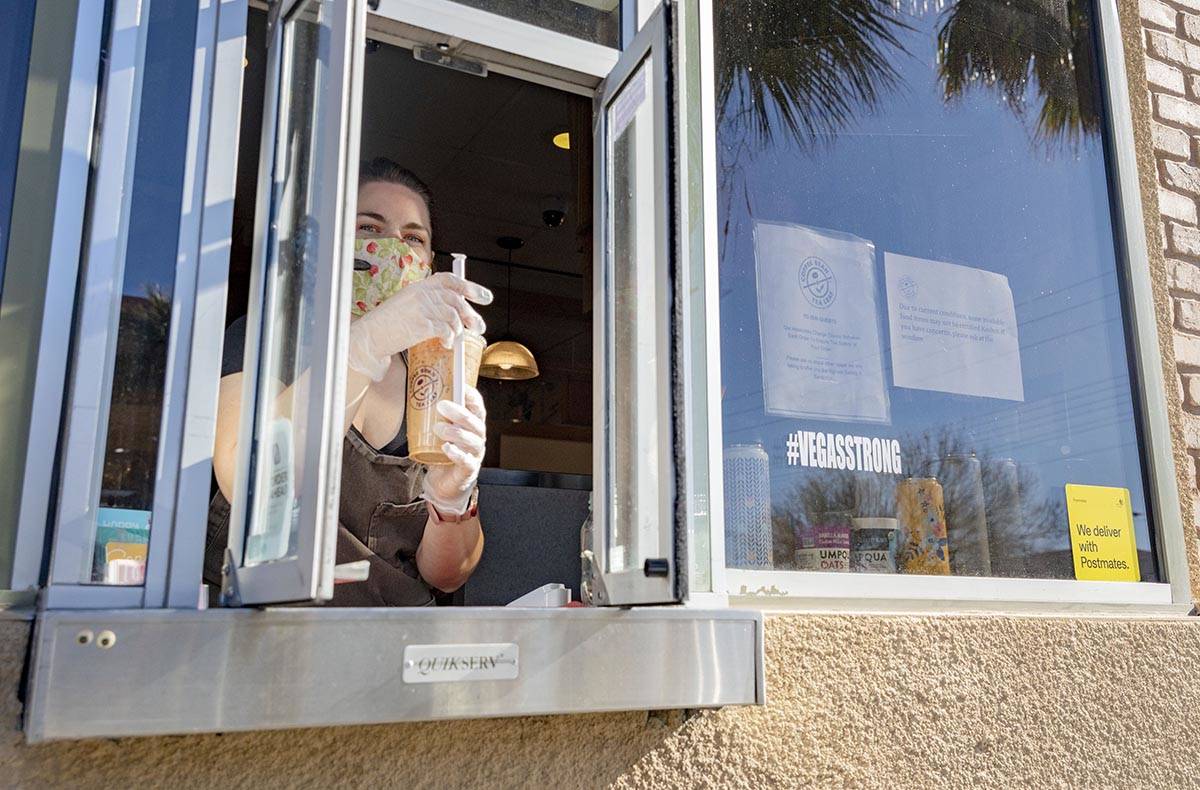 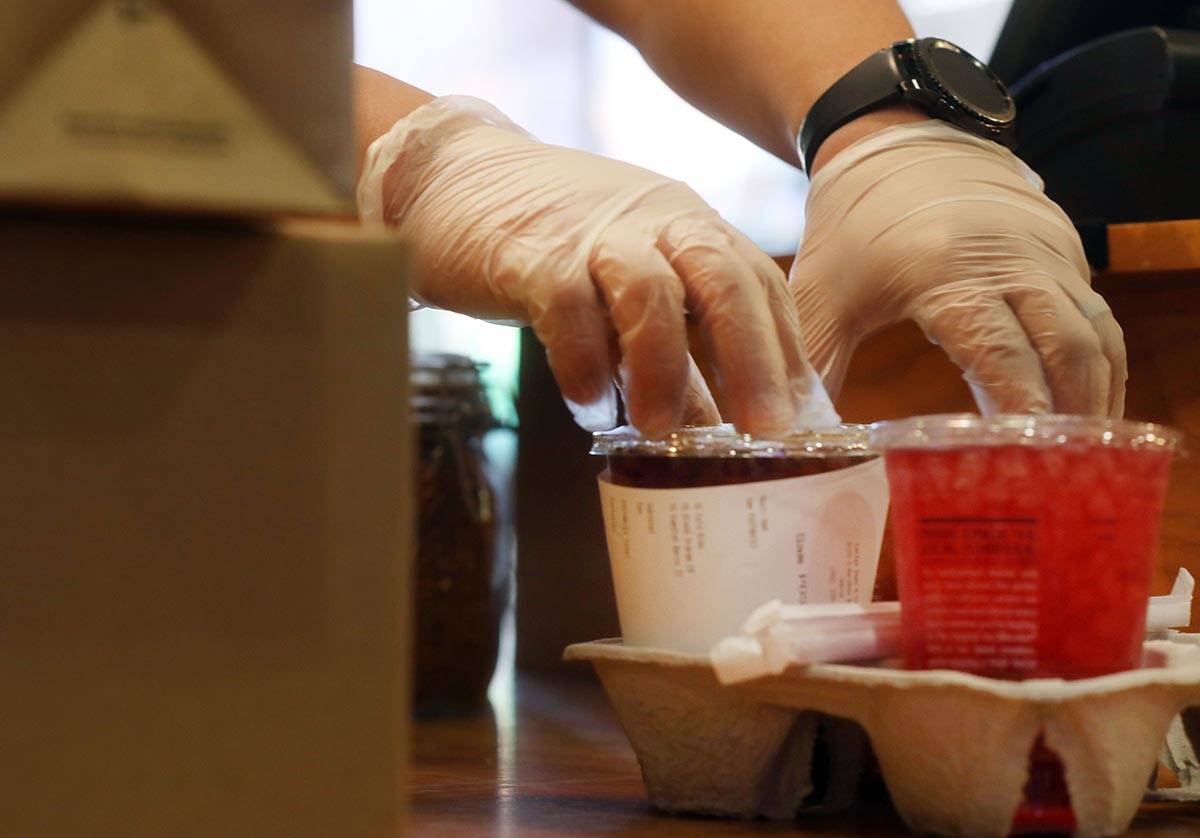 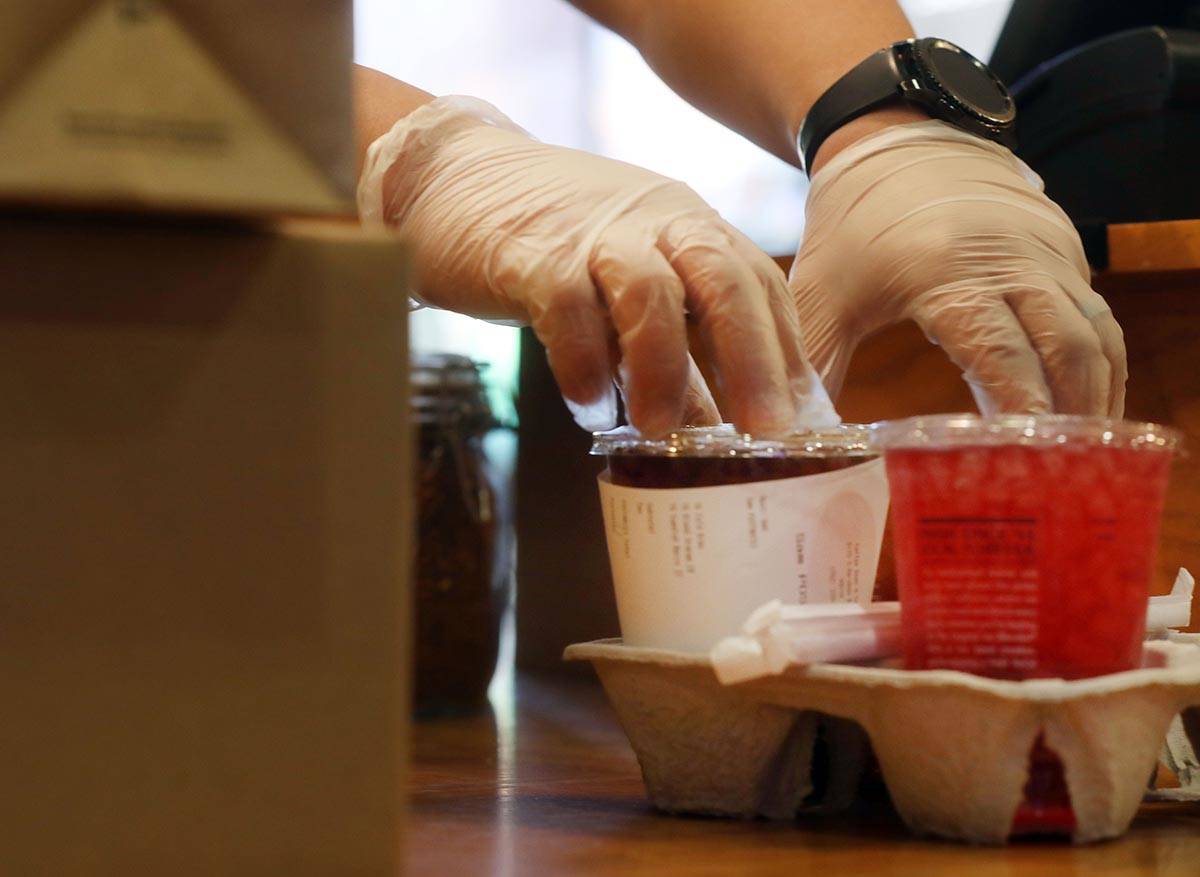 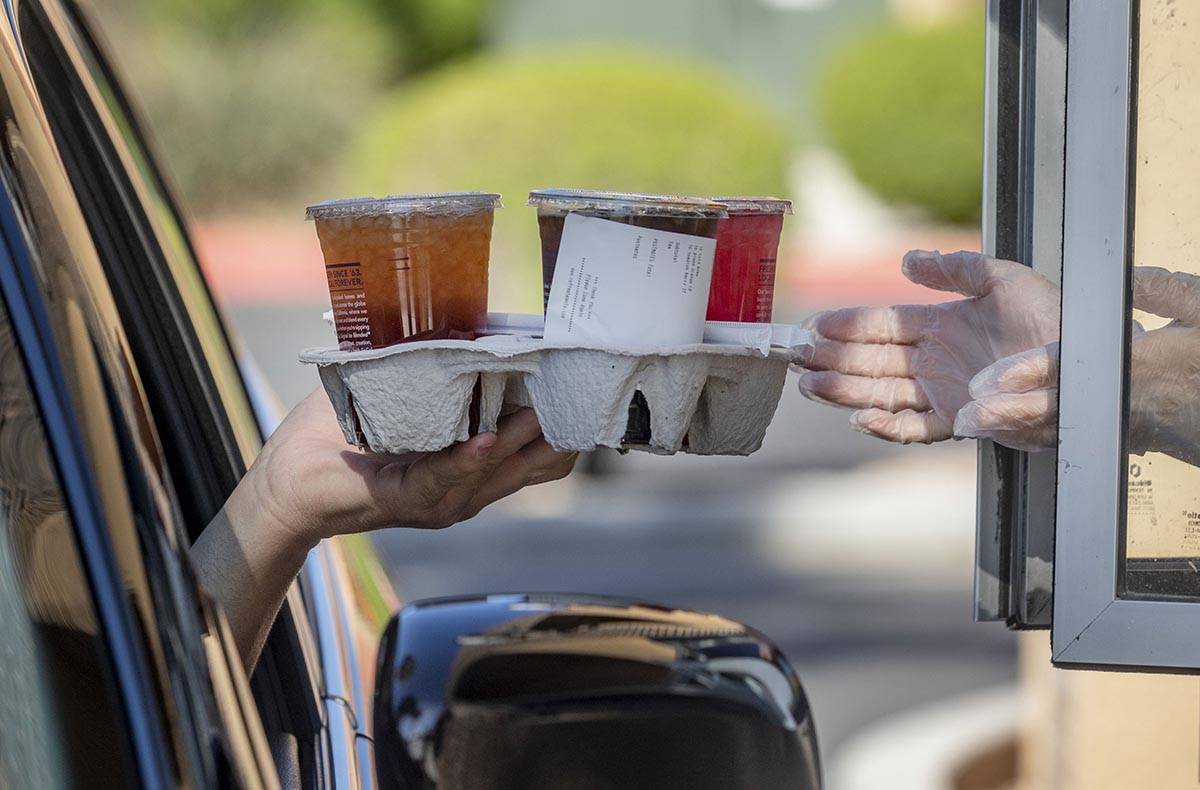 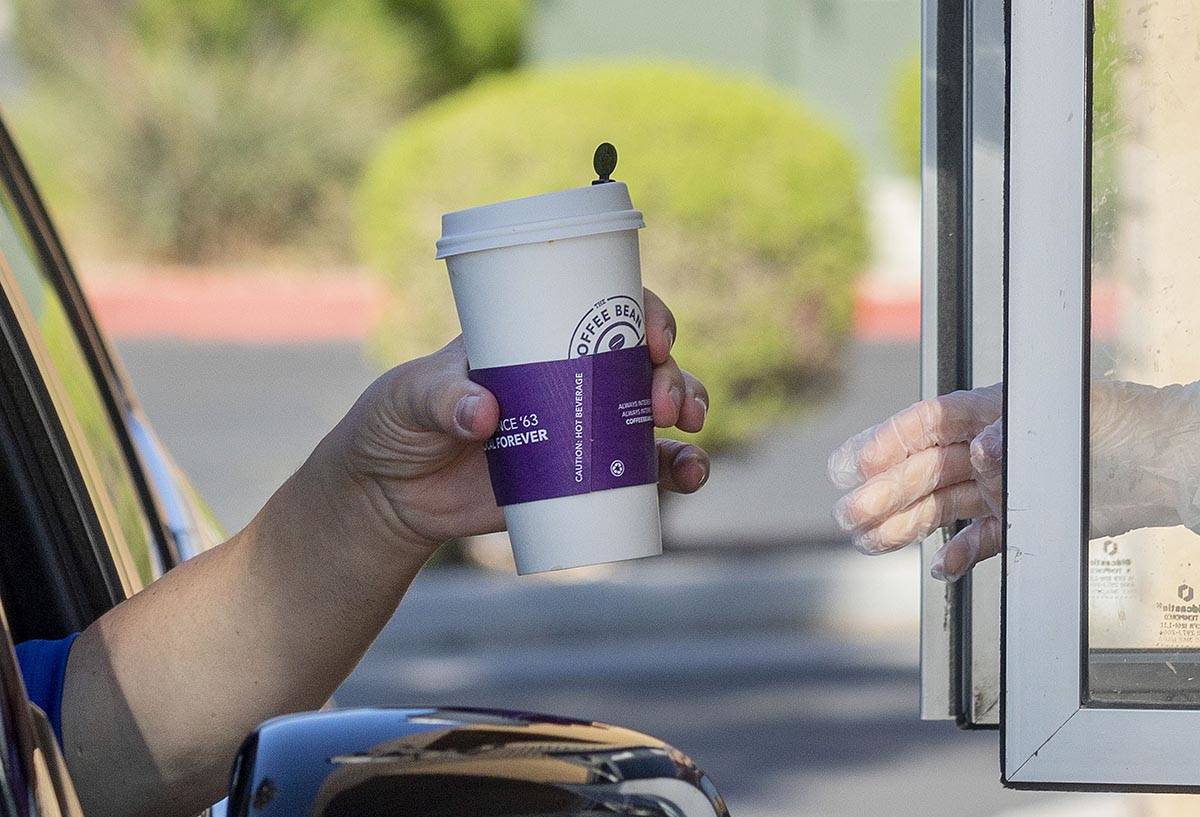 A driver for Postmates pickups up an order at the Coffee Bean & Tea Leaf located on 6115 S Rainbow Blvd., in Las Vegas on Wednesday, April 15, 2020. (Elizabeth Page Brumley/Las Vegas Review-Journal) 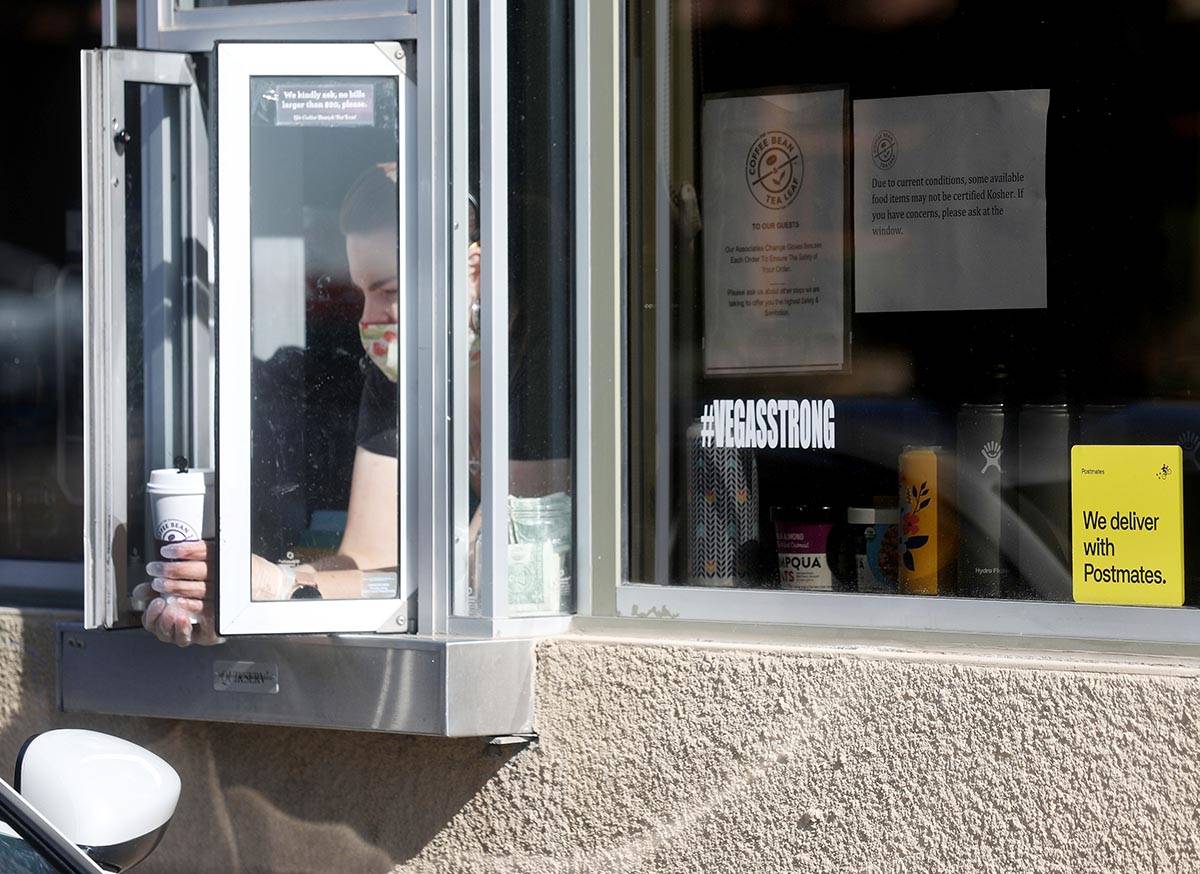 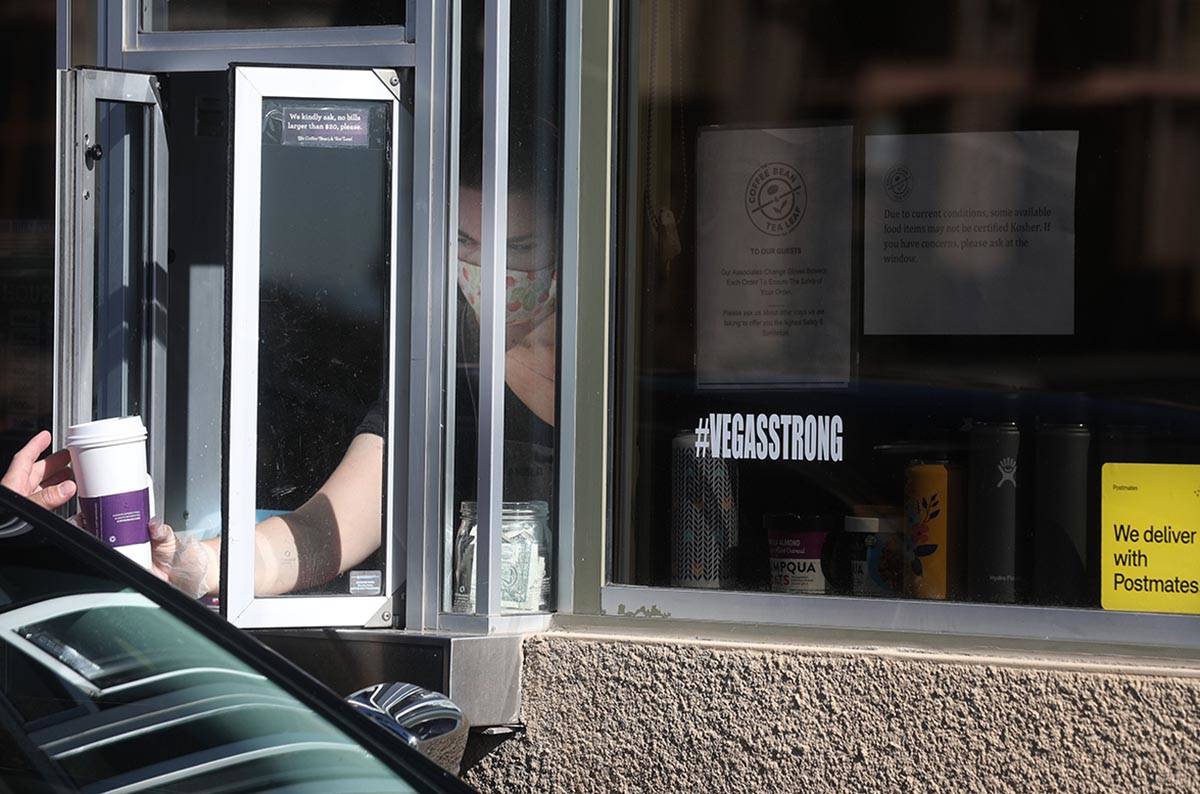 The question of whether third-party delivery companies help or hurt restaurants has long been a hot-button issue among restaurateurs and chefs. And the mandatory shift to curbside pickup and delivery models has made it more relevant during the COVID-19 crisis.

Last week, the Nevada Restaurant Association and the Women’s Hospitality Initiative sent a letter to Gov. Steve Sisolak outlining 18 steps they would like the state to take on behalf of struggling restaurants. It included two types of regulations on third-party delivery services: a cap on fees charged to restaurants, and the prohibition of “surprise or hidden fees.” While no services were mentioned by name, it was hard not to think of Grubhub’s “Restaurants Are Our Family” ad when the letter claimed, “Despite public claims of helping local restaurants during this crisis, several third party delivery companies continue to charge restaurants exorbitant fees.”

The debate escalated this past weekend, when a column on Food & Wine’s website by Khushbu Shah, titled “It’s Time to Delete Your Delivery Apps,” went viral. The no-holds-barred piece accuses apps such as Grubhub, Postmates, Uber Eats and Doordash of “profiteering from the coronavirus crisis” and concludes by telling readers “Until these apps actively start agreeing to commission caps, it’s time to delete your delivery apps and let them burn.”

Commissions that delivery services charge restaurants are at the heart of the controversy. The city of San Francisco announced Friday that it was capping fees on third-party food delivery at 15 percent “through the remainder of the local emergency, or until businesses are permitted to reopen for dine-in service, whichever comes first.” Without such regulations, however, fees often range from 20 percent to over 30 percent of the total order, with large companies with multiple locations usually paying less, while stand-alone mom-and-pops generally pay more.

Some restaurants compensate for high commissions by raising their prices on delivery orders. But Joe Essa, a member of the National Restaurant Association’s executive committee, who helped draft the letter to Sisolak, says that even at the low end of the range, the commissions are too high.

“I don’t want to prevent anyone from having a successful business model,” Essa says of the services. “But some of them are outrageous. If they’re going to add 18, 20, 22, even 15 percent — it’s almost where it makes the meal not a value, and we, the restaurants, don’t look good.”

On the flip side, many restaurants that use the services say that keeping a delivery driver on staff, and the insurance costs associated with that, would be even more burdensome than paying the fees.

So what do Las Vegas chefs and restaurateurs think? Do they really want you to delete your delivery apps in a show of solidarity? Many do.

“Right now, during COVID, I would say delete the apps,” says Brian Howard of Sparrow + Wolf, which has never used a delivery service but is considering options for when it reopens. “Especially because (restaurants on the apps) are doing curbside pickup, or some kind of delivery on their own. Support that restaurant by giving that money to them, versus giving it a company that’s taking advantage of them.”

“The reason I completely agree with Food & Wine is that (delivery services) are not in the business of helping restaurants at all,” says James Trees, another chef who has steered clear of the services at his local restaurants, Ada’s and Esther’s Kitchen. “They’re in the business of maximizing the profits for their shareholders and their private equity firms. And every time I see that commercial for Grubhub where it’s like ‘We’re here for your favorite restaurants,’ I’m like, you’re putting my favorite restaurants out of business, in the worst possible way. You’re taking from them when they need the cash flow the most.”

“Should we delete all of the existing apps and do away with them? The short answer is yes. Do restaurants need a good delivery service? That answer is also yes. There just isn’t one that exists yet.”

Perhaps not surprisingly, restaurants that rely on these apps to deliver their food aren’t quite so quick to encourage their deletion. Jeff Weiss, who unsuccessfully lobbied Postmates to waive its fee for the pop-up bagel service being offered by his temporarily closed restaurant Valencian Gold, isn’t quite so adamant in his opposition to the services.

While he found the company’s offer to reduce its fee by 3 percent inadequate, he refers to the idea of deleting all your apps as “the nuclear button” and says it’s an option he doesn’t think people should take “right off the bat.”

“The spirit is right. But here’s my problem with it: You have workers that are part of the gig economy who rely on those (delivery) jobs. … So I don’t think that deleting the app is necessarily the answer. I do think reducing their astronomical rates is a good first step.”

To make up for the 30 percent or so he has to pay the services, his restaurant has raised prices online. So a salad that would cost $6 for curbside is priced at $9 through a delivery app. He says that’s a better solution than simply ditching the apps.

“I don’t think that we should delete it. Because we’re not delivering. So they’re doing the community a little bit of a service.”

Jenny Gidge, vice president of operations for the local Coffee Bean & Tea Leaf outposts, agrees. Her stores launched Postmates delivery during this crisis, and the ability to reach guests who couldn’t leave their homes was a significant consideration.

“We’re in a time that’s very difficult. And there are individuals that can’t get out to pick up their own products. So the delivery options are extremely helpful.”

She agreed, however, that fees should be adjusted during the crisis.

“I feel like everything should be altered at this point, and they should have taken it into consideration.”