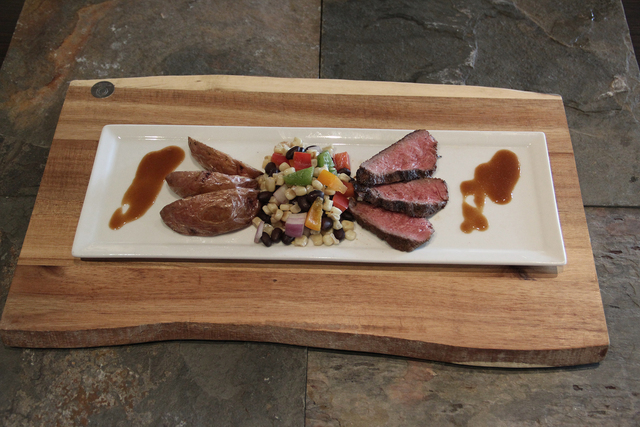 The Bonanza cut’s marbling gives it lots of flavor, but it weighs only about 4 ounces. (Courtesy) 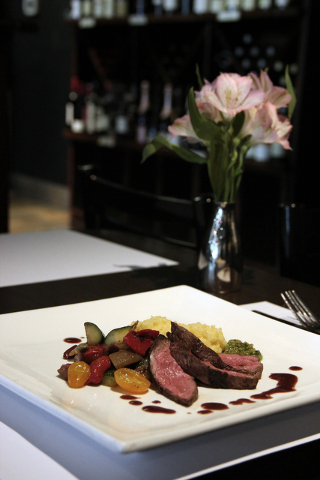 The Bonanza cut’s marbling gives it lots of flavor, but it weighs only about 4 ounces. (Courtesy)

“When I tasted that piece of beef, I said, ‘Holy Jesus!’” de Mello said. “It tastes absolutely fantastic as a steak.”

That was in 2014, when de Mello was working at an Arizona beef-processing plant.

“I was always looking for different opportunities,” he said. “How can we make it better?”

His aha moment came while working the rib line at the plant. His supervisor pointed out a small piece of meat at the top of the rib, which normally was added to the cuttings used for ground beef. De Mello noticed how well-marbled the piece was and thought it might have potential as something better than hamburger. He asked to take some home so he could try it. And then came that divine-inspired reaction.

De Mello told the company it had a tasty treasure that could be sold as a luxury steak instead of treated like more common trimmings. The problem: Since each steer yields only two pieces that total about a half-pound, there’s not a lot of volume.

He kept pushing the cut but couldn’t drum up much interest. De Mello was working at the plant level, where there’s no research and development department. His supervisors, he said, didn’t send it up to the corporate level for more study. He’s pretty sure they never tasted it.

But the lack of interest changed last year when de Mello went to work for the University of Nevada, Reno, where he’s an assistant professor in the college of agriculture, nutrition and veterinary science. While speaking with the college’s dean, Bill Payne, about the meat industry in Nevada he sensed a juicy opportunity. Payne was thinking of ways to increase cattle production in the state, since only 7 percent of the meat consumed here is produced here; in other words, beef that gets its start in Nevada doesn’t stay in Nevada. Payne even had the perfect name for Nevada beef: Bonanza, after the old TV show filmed at the now-defunct Bonanza Ranch near Lake Tahoe, which put the Reno-Carson City area in the spotlight.

De Mello loved the name, but knew the challenge all too well: Beef-production plants are expensive, and not many are being built these days. The industry, he said, is focused on optimizing plants they already have.

But he thought Payne might be interested in the little steak he’d discovered, so he mentioned it. He was. The Bonanza cut was born. It was unveiled at a private tasting in Reno Aug. 23, and de Mello has high hopes for its future.

This is largely because the cut is 13 percent fat, making it exceptionally rich and flavorful.

“There is no natural cut in (USDA) choice cattle or prime cattle that has more than 13 percent fat,” he said, although it’s found in wagyu and similar high-end breeds. “And we all know that fat is responsible for flavor. If you do not have fat, you do not have flavor.”

Not to mention tenderness.

“Most of the people who had a chance to taste it … were very impressed with the quality of the meat,” he said. He equates the flavor to that of a mix of short ribs and strip loin.

De Mello said he thinks the cut could be a big money-maker for the industry. Ground beef, he said, wholesales at about $1.90 a pound, but this cut could wholesale at $5.30 a pound. Since an average plant processes about 5,000 cattle per day, that would be 2,500 pounds of the Bonanza cut, or $8,500 a day more than if it was used as ground beef.

For now, the Bonanza cut probably isn’t going to make it to your neighborhood supermarket because of the low volume, de Mello said, but it may start appearing in restaurants. Interest in the new cut is emerging, albeit slowly. JB Swift, the largest beef packer in the world, has talked to him about it four or five times, he said, and the United States Meat Export Federation is sharing information with their international offices.

Nicole Brisson, culinary director for the four B&BHG restaurants in Las Vegas — B&B Ristorante, Carnevino Italian Steakhouse, Otto Enoteca Pizzeria and B&B Burger &Beer — said that since they break down their own beef, she’s familiar with the cut.

“It’s very flavorful,” she said, adding that it’s located near the rib-eye. “I think it tends to get discarded because it’s hard to market.”

The problem, she said, is volume: To feature it as a steak in a restaurant, she would need 50 or 60 a night.

“I think I could sell it sort of as a one-shot deal,” she said. “That would probably be the only way I could do it.”

And she noted that low volume, coupled with high demand, will inevitably lead to a higher price.

“That’s what happened with hanger,” she said of the cut from the plate, on the lower part of the animal. “Once it got more recognized and chefs started demanding it, the price went up. Same thing with short ribs.”

De Mello knows he’s not the first person to try to launch a new cut, but learned from his Ph.D. adviser, who discovered the now-ubiquitous flatiron steak, and also apparently from the patented Vegas Strip Steak. The latter was developed a few years ago at Oklahoma State University but never took off. He said he was “strongly encouraged” not to patent the Bonanza cut because that would raise the cost.

De Mello said the low supply could become one of the Bonanza cut’s biggest assets, especially if it’s only distributed throughout Nevada.

“Las Vegas can have all the supply,” he said. “The Bonanza cut is a reality, it’s something truly different.”