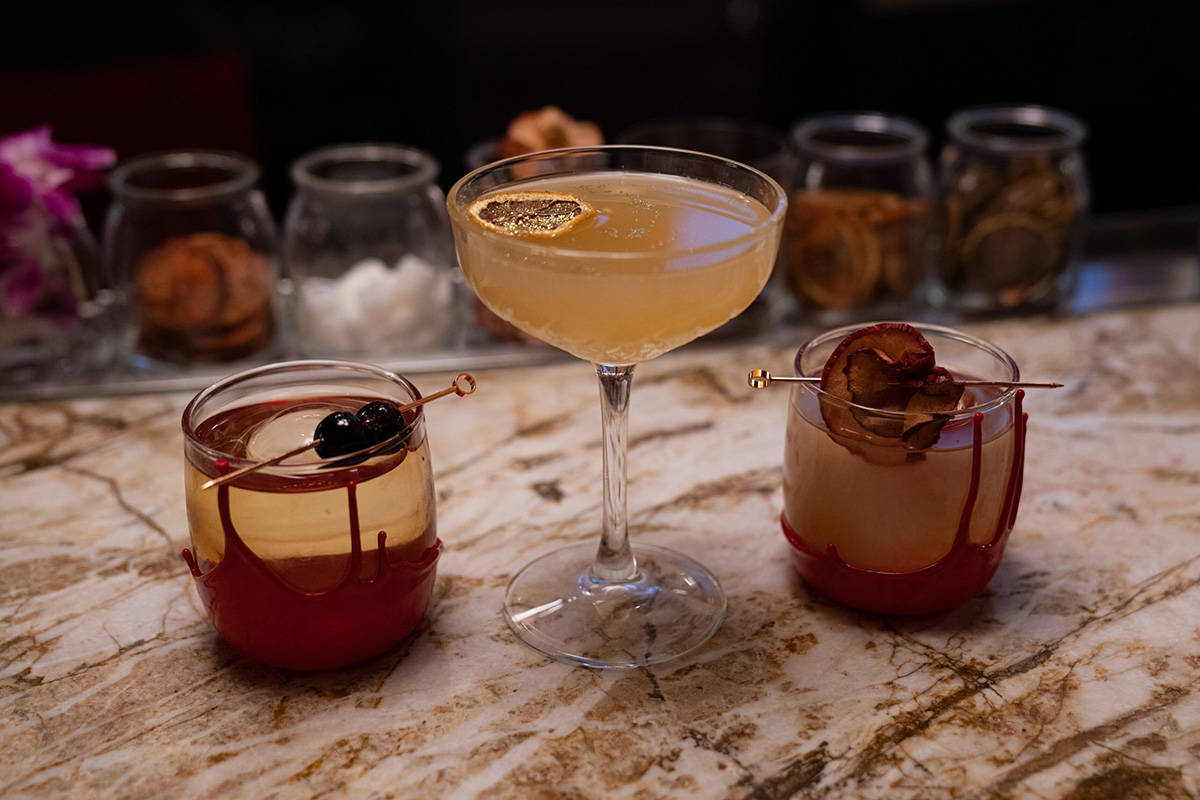 Women's History Month cocktails at Bugsy & Meyer's at the Flamingo, from left, Madam Red, The Gold Rush and The Feminine Mystique. (Michael Greer)

Black Restaurant Week continues through Sunday at seven area restaurants, which are featuring special prix-fixe menus. Participants in the local observance, which grew out of one founded six years ago in Houston, are Big Chicken Shaq, Gritz Cafe, Lo-Lo’s Chicken & Waffles, Pots, Simply Pure, Soul Foo Young and TasteBudz Las Vegas. At least one — Big Chicken Shaq — is offering a discount for those who mention Black Restaurant Week when ordering. For more information, visit blackrestaurantweeks.com.

Vice President Kamala Harris paid a visit to Tacotarian in The Arts District on Monday. “I was sitting there doing work on my computer when someone came up and said, ‘Hi, I’m from the White House and the vice president will be here in about 10 minutes to pick up tacos to go,’ ” said co-owner/co-founder Kristen Corral. When Harris arrived, she spoke with Corral and her staff about eating vegan, the rescue plan, the vaccine rollout and how their business had been affected by COVID, before leaving with her order — which, for those who are wondering, was two asada tacos, two mushroom tacos and two super tacos. Corral calls the visit “a huge honor,” adding, “our staff were beside themselves.”

Bugsy & Meyer’s Steakhouse at the Flamingo is celebrating Women’s History Month in March with three specially created Maker’s Mark cocktails, in honor of the company’s pioneering Margie Samuels. Madam Red is a double old fashioned that also contains Lustau Palo Cortado sherry, Luxardo liqueur, chocolate bitters and a Luxardo cherry, while The Feminine Mystique, also a double old fashioned, is made with Marker’s Mark 46, Contreau, vanilla tamarind syrup and lime juice with an apple blossom, and the Gold Rush is made with Maker’s Mark 46, honey-ginger syrup and lemon juice with a dehydrated lemon wheel and gold dust. They’re $25 each, through the end of the month.

Learn from the pros

Wynn Las Vegas master cake designer Flora Aghababyan, known for her intricate, over-the-top creations, will lead an immersive class in advanced cake decorating techniques at 2 p.m. Friday at the resort. It’s $125. And SW Steakhouse chef David Walzog will for the first time share some of the restaurant’s secrets in a cooking demonstration and lunch at noon March 25. It’s $150. wynnlasvegas.com

Josh Smith will be running the kitchen for Wynn Las Vegas’ Delilah Supper Club. The new gig will be a return to the Strip for the veteran chef, who most recently oversaw Michael Mina’s Aria outpost, Bardot Brasserie. It means, however, that he will not be overseeing the relaunch of Downtown Summerlin’s Andiron Steak & Sea, as previously announced. Andiron is expected to reopen later this year with a new name and new concept. Smith is in the midst of hiring for Delilah, expected to open this summer.

Eataly at Park MGM is offering a $35 all-you-can-eat Italian Pizza Giro, or tour, from 11 a.m. to 10 p.m. Friday through Sunday at La Pizza e La Pasta, with no restrictions on the menu. Eataly also is offering 40 percent off six or more bottles of wine, while supplies last, on Vino Day March 26. The corkage fee at Cucina del Mercato also will be waived that day. eataly.com

MTO Cafe has been sold to the Babystacks group. Both locations, at 500 S. Main St. and in Downtown Summerlin, will continue to operate as MTO Cafes. mtocafe.com

David Chang’s Bang Bar, a Monofuku takeout concept, is scheduled to open April 1 in Block 16 at The Cosmopolitan of Las Vegas. cosmopolitanlasvegas.com

Another Chick Fil-A is planned for 4165 Paradise Road. Since the company is known for demolishing buildings it purchases and rebuilding on the site, the opening will be down the road a bit.