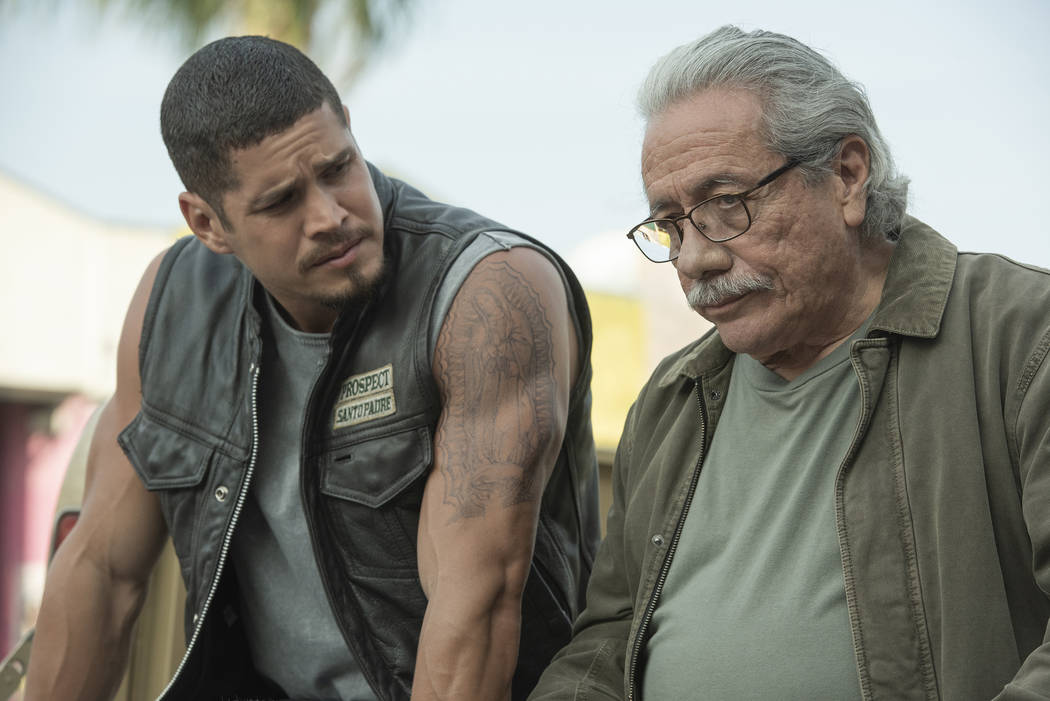 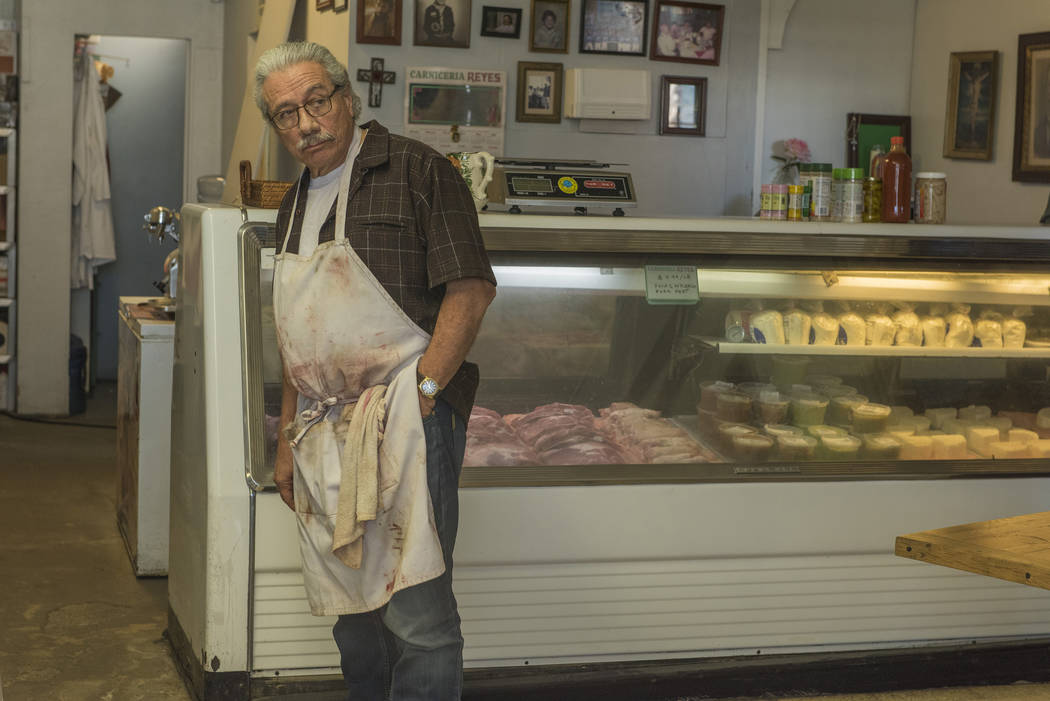 Edward James Olmos — known for “Miami Vice” and for playing teacher Jaime Escalante in “Stand and Deliver” – is on a plane in Phoenix on his way to El Paso, Texas. His mission: A memorial service for one of the victims of the Aug. 3 Walmart shooting.

“I imagine people will want to hug me because I get a lot of that these days. We will start crying together,” Olmos says. “I get incredibly emotional when I talk to people about the world we live in now. But the good news is, as I get older, I not only feel the respect, but I feel the love from complete strangers.”

“I feel the love,” he repeats before wheels-up time.

There is also love and a rabid fan following for his biker series, “Mayans M.C.,” the next chapter in the “Sons of Anarchy” saga. It returns Tuesday on FX.

Edward James Olmos: Oh, man, it’s just hanging out with my grandkids. I just adore my family and there is nothing better than just spending time with them.

No, I’m vegan. Plus, I don’t cook. My daughter-in-law does all the cooking. She’s an immigration attorney. She does so much work throughout the week, and cooking is her escape.

You’re on your way to El Paso.

Oh God, how could I not attend this service? It’s really important that we unite with people during these tragic times. I’m only upset that I won’t be able to fly to Dayton today, too, for another service. What’s going on now breaks my heart. I just don’t know what to say. I’m at a total loss, except to wonder, “How could it ever get to this point?” I can’t believe we are here. Today. In America.

You’ve always been an activist. What do you make of current times?

I’m 72 years old. If you would have asked me when I was younger, I would have never believed we would be at this level of hate in this country. Maybe in the 1950s, but not in 2019.

How do you find solace?

I remind people, “Don’t ever forget: This, too, will change.” It will. And when it does, it will change to the point where people realize that you don’t need to instill fear and ugliness.

What can we expect from the new season of your outlaw drama “Mayans,” where you play family patriarch Felipe Reyes?

My character is finding life hard ever since the death of his wife. Now this idea of retribution is happening. The show’s moving in a very, very strong way. I think the second season is much more intense and much more rewarding. I’m really proud of it. The writing is magnificent.

What is the vibe on the “Mayans” set?

We can’t wait to get the scripts each week. We’re like, “Oh my God, this is really the future?” There’s tears, laughter and anxiety when we read those scripts at the table read. It’s the first time we know what will happen to our characters. And we’re blown away.

What drew you to the series?

It’s about a brotherhood — a tribe. The idea is mostly, “I don’t care if my brother is wrong or right. I got his back.” What we do is set up the stereotypes and then break them down. We have a sociopath, but he also has empathy. I think the darkness of the show gives people energy while watching it. In many ways, it’s like “Dexter” or “Sons of Anarchy.” We’re seeing things that are dark, but we want to see them even if we have to go down a rough road.

You grew up in Los Angeles where your dad worked as a mail carrier and welder. How did you tell your parents that you wanted to be an actor?

I don’t think I ever told my family I want to be an actor. My father thought I was going to be a great baseball player. In fact, for eight years when I was a kid, my father and I went to the ballpark together almost every single day. I never missed a day. He never missed a day. Then one day, I just stopped. Cold. I got another offer to sing in this garage band and I loved rock music.

Was your father upset?

He wouldn’t talk to me. It was like I cut this lifeline between the two of us. And he just couldn’t understand why I did it.

Your big break was playing Lt. Martin Castillo on the NBC television series “Miami Vice” (1984-89). But you almost turned down the role. Why?

I turned “Miami Vice” down at first because I didn’t want to sign an exclusive contract with NBC, and I’ve always had artistic control of my characters. That’s something I really appreciated. It’s a wonderful feeling as an artist to have that responsibility. So, I originally said, “I can’t do it full time unless I have those things, but if you want me to do two or three episodes, I could really use the work.”

At the time, you were still delivering furniture to pay the bills. How do you turn down a network TV series?

I hung up the phone and my wife said, “I think you should go talk to your son.” He was 10 at the time. She said, “He’s very sad and he doesn’t understand why his father doesn’t want to work.” It hit me like a knife to the heart. I realized that it’s not just about your artistic work. We needed the money in order to survive. Finally, I was offered a non-exclusive contract and creative control of my character.

You’ve been an activist your entire life, helping with Boys & Girls clubs and at-risk youth. You brought a broom to the streets to clean up after the L.A. riots. Are you political?

I don’t support candidates. I support what really makes a difference. Registering to vote is the most important thing. Everyone in this country needs to vote.

What is the root of your activism?

It comes from my upbringing. My mother and my grandparents were activists. They’ve always given more than they received. I understand the beautiful life that has been given to me. I really appreciate how I got here and I must give back.

What can you do in El Paso today?

If I can help in any little way then I’m happy. People will see me. A familiar face. I’ll just hang out and talk to the people. I hope it provides some comfort.