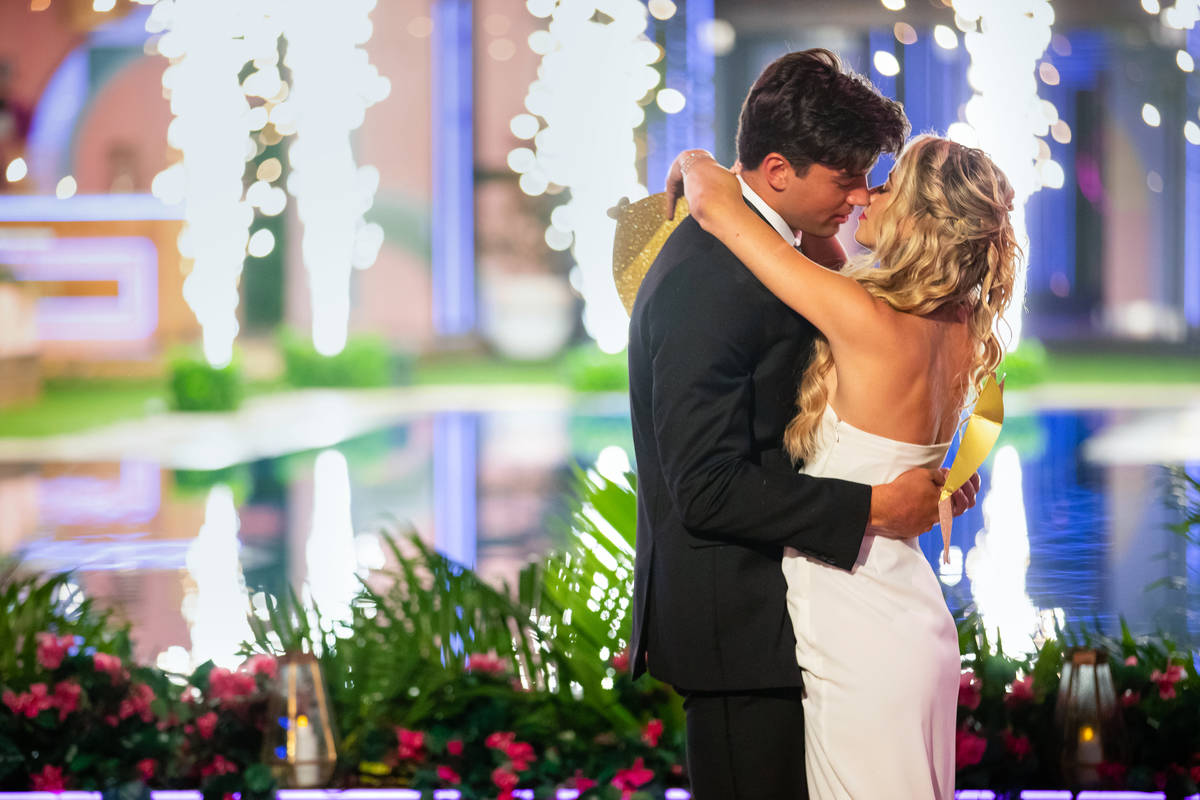 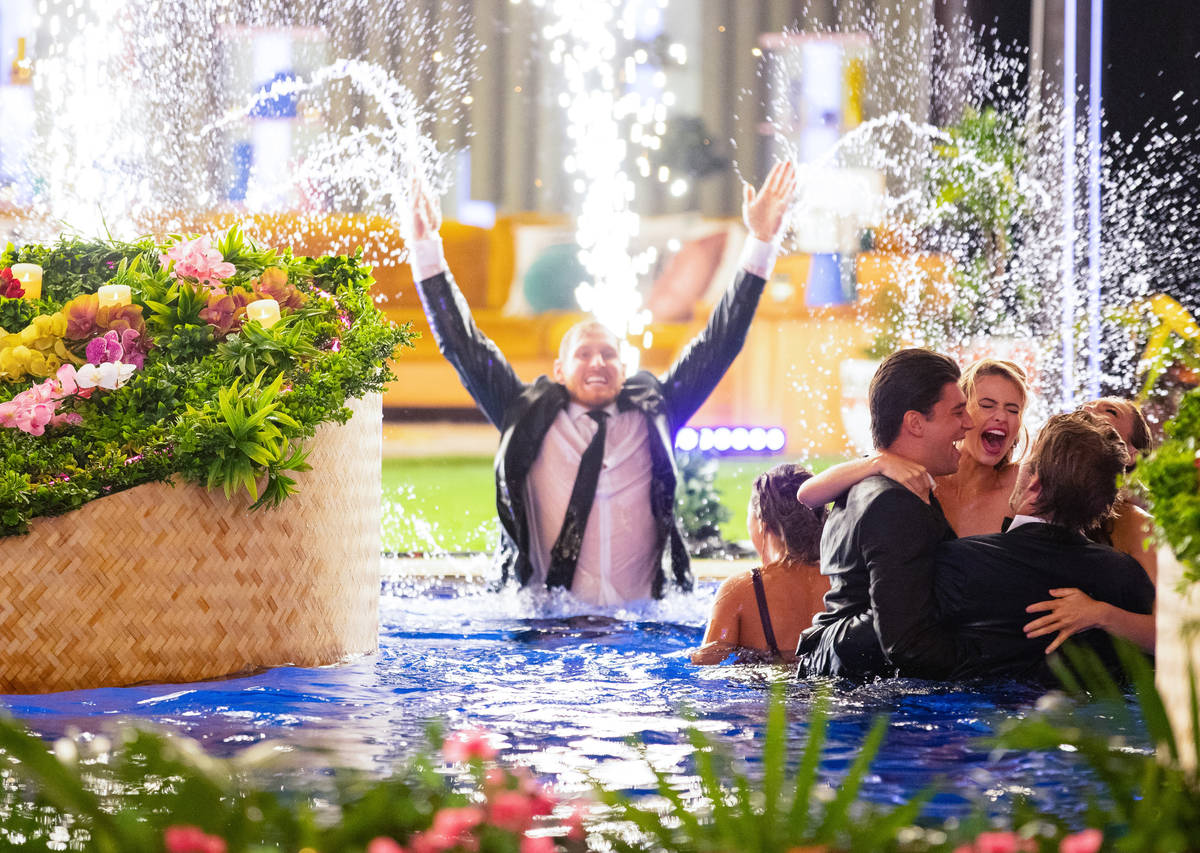 Cast members celebrate in the pool during the final episode of "Love Island" on August 7, 2019. (Colin Young-Wolff/CBS Entertainment) 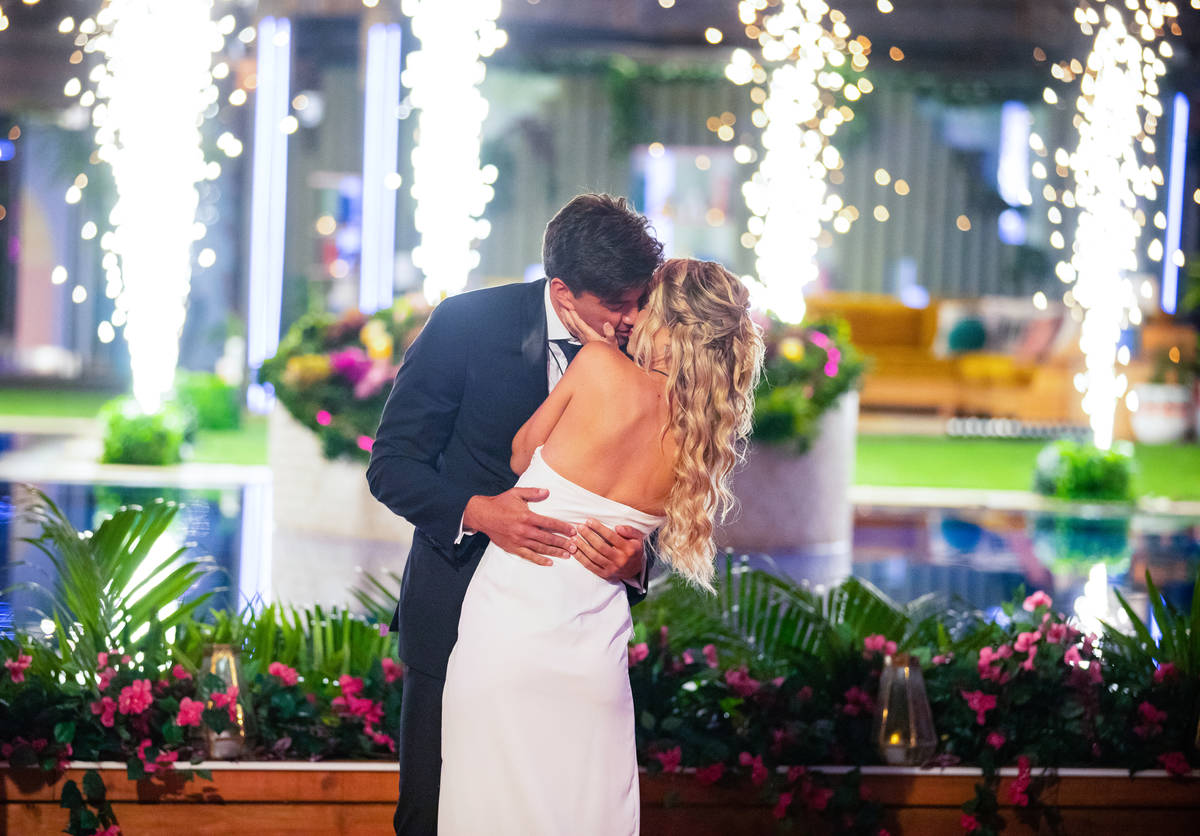 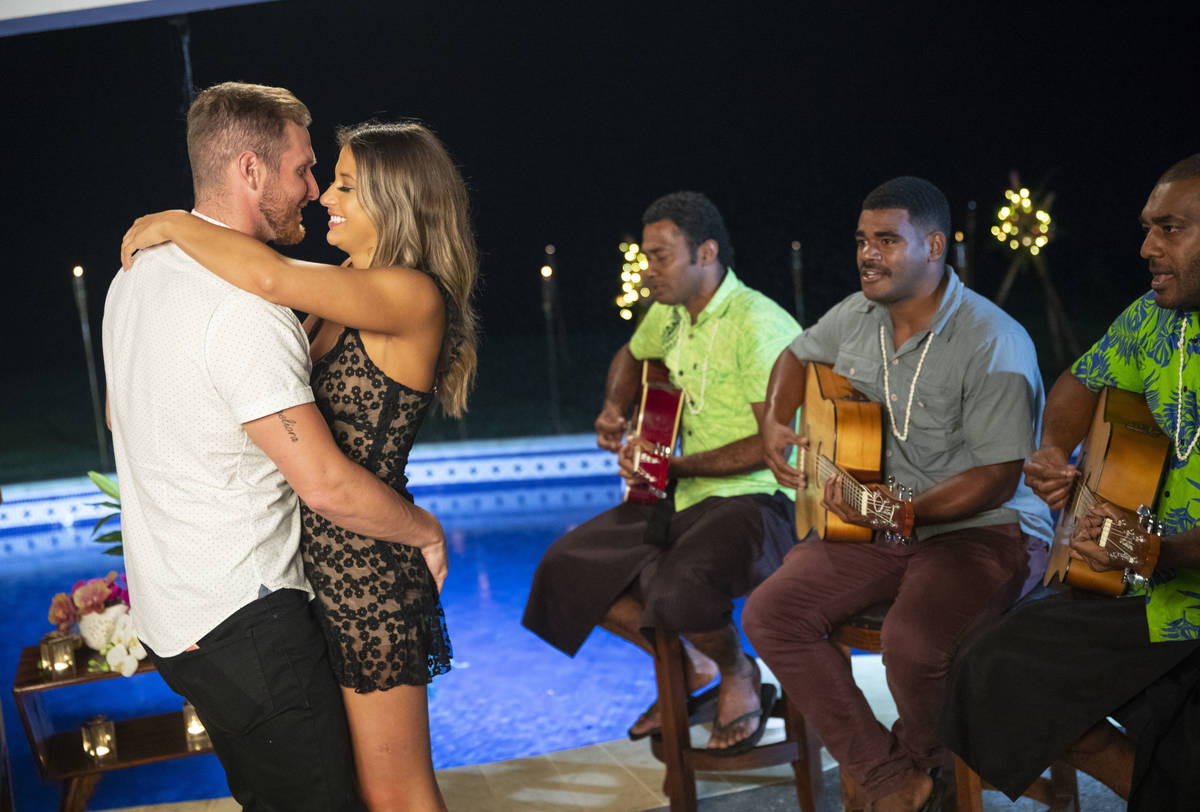 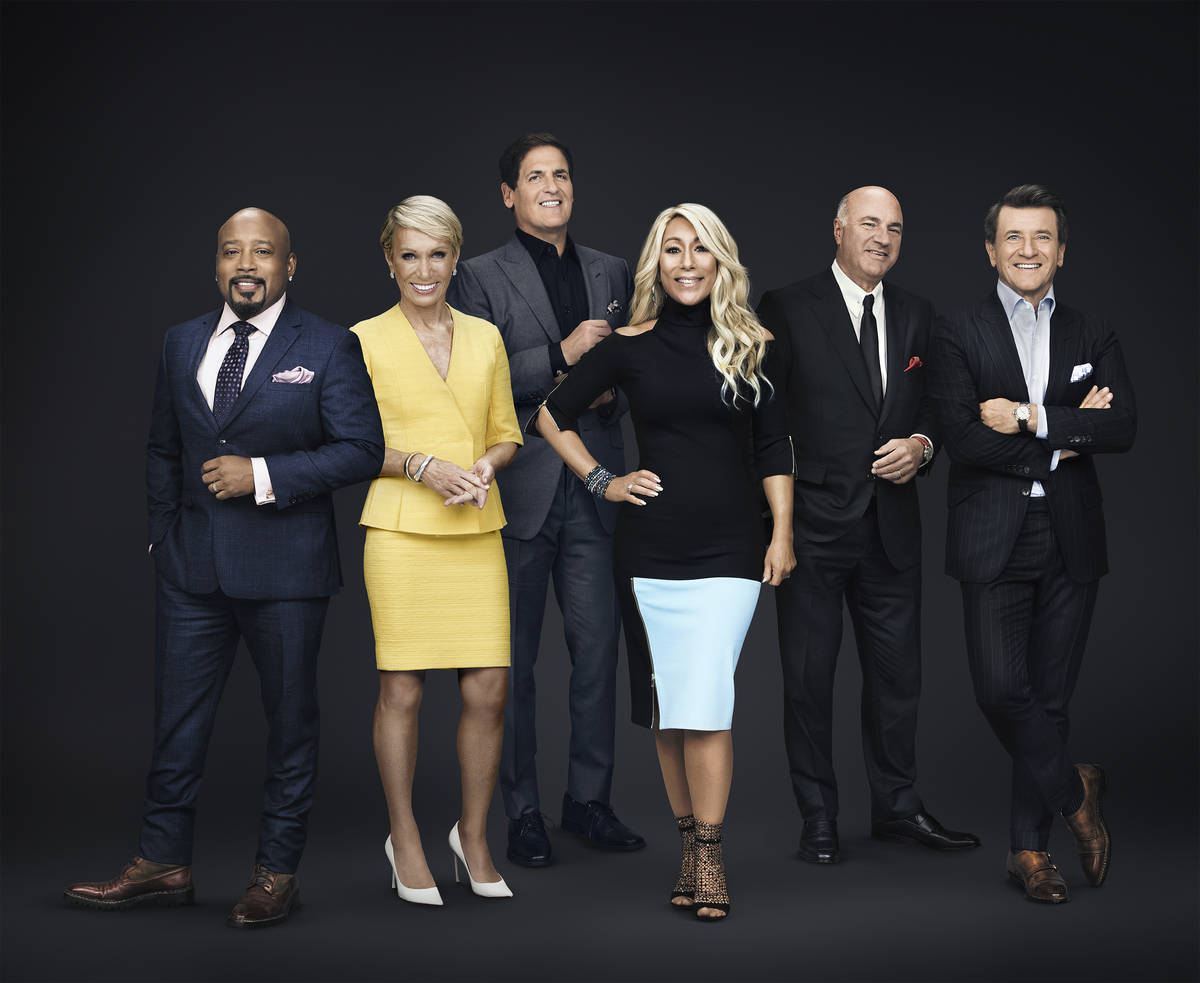 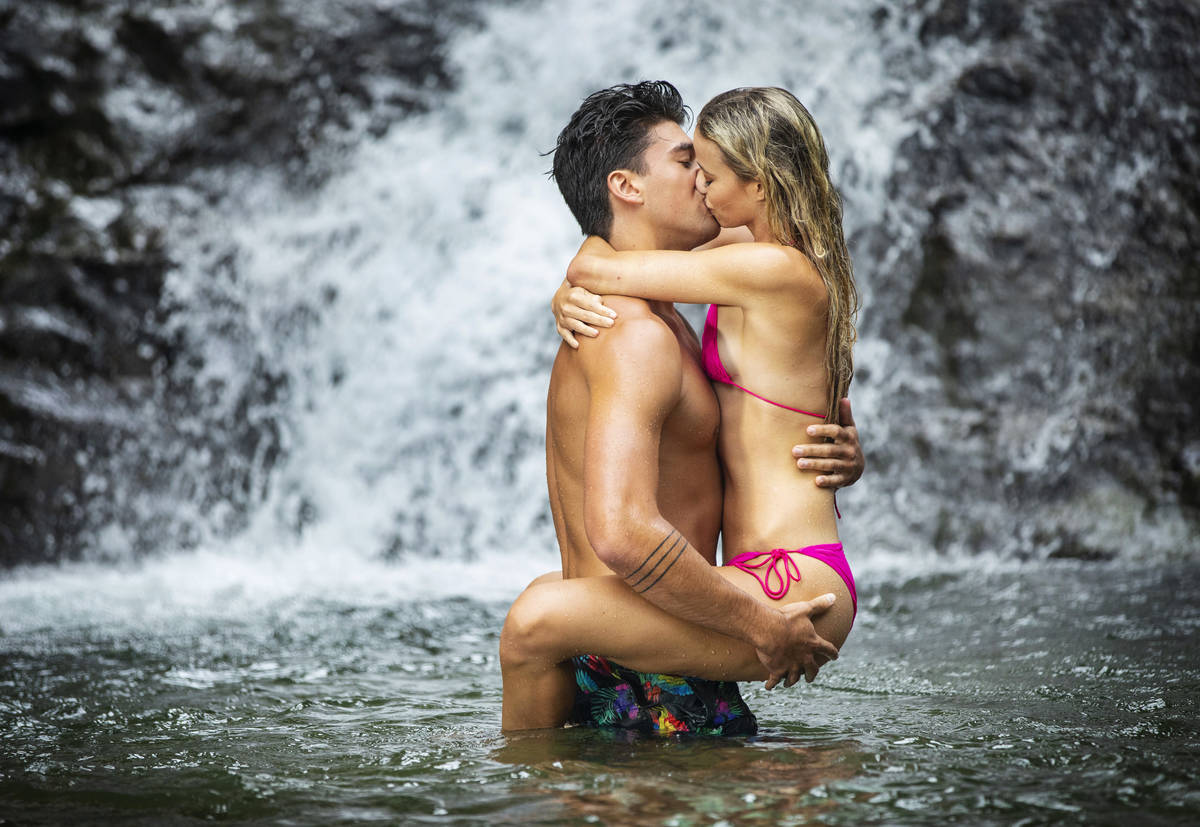 Zac Mirabelli and Elizabeth Weber appear in a scene from the July 24, 2019, episode of "Love Island."(Colin Young-Wolff/CBS Entertainment)

Just when it seemed Las Vegas’ dreams of being a bubble city had burst, with the NHL having opted for Canada and the NBA and WNBA sequestering in Florida, at least one of the Strip’s shuttered hotels is being used to house a different entertainment industry in the middle of a restart.

“Love Island,” the CBS reality dating competition series that plays out like a hybrid of “Big Brother” and “Bachelor in Paradise,” is taking over The Cromwell for its upcoming season. New episodes will air each weekday at 9 p.m., with a two-hour recap episode every Saturday at 8 p.m., beginning Aug. 24.

ABC’s “Shark Tank,” meanwhile, is setting up a quarantine bubble with its stars and crew members inside an as-yet-unannounced Strip hotel to film its next burst of episodes.

Other local hotels may come into play as television struggles to adapt to the new realities of production in the coronavirus era.

“Unfortunately, we do have some properties that are not open yet,” says Eric Preiss, director of the Nevada Film Office. “Those properties are easily able to be locked down and (have) security put into place to have that controlled environment that, for a couple of these shows, really makes a lot of sense.”

With Los Angeles being hit especially hard by COVID-19, it’s uncertain when and how the city’s TV production will resume on a grand scale. That unpredictability is causing producers to reach out and explore other ways of delivering their content. Given Las Vegas’ proximity and the fact that the valley is more open — at least for the time being — than much of California, Preiss has been hearing several times a week from representatives of various shows, channels and streaming services.

For “Shark Tank” — unless the show’s moguls truly run wild this season and start hearing business pitches on the High Roller or SlotZilla — that probably just means transporting the show’s set from its Culver City, California, home base or re-creating it here. Pretty much any location would suffice if enough of it could be locked down and its rooms met the standards of the show’s filthy-rich “sharks”: Mark Cuban, Barbara Corcoran, Lori Greiner, Robert Herjavec, Daymond John and Kevin O’Leary. (“Shark Tank” representatives declined to comment for this story.)

The real coup, both for Caesars Entertainment and the city, is landing The Cromwell as the setting for the now confusingly named “Love Island.” In its first season, the U.S. remake of the British reality smash garnered nearly as much media attention for its stunning villa in Fiji as it did for its photogenic cast members looking for a match.

“When Fiji went away as an option for filming, we focused on what the dream safety scenario would be,” says “Love Island” executive producer Simon Thomas, “and that’s where the idea of a bubble in a closed hotel in Las Vegas came from. From a safety perspective, it’s the only way to go, but it also allowed us to lean into the city’s DNA and brand as an entertainment destination and (a) place where the cast could also experience the adventure and glamorous aspects of the show.”

Both productions are expected to hire local craftspeople and spend money with local vendors, all while reminding national audiences that Las Vegas is open for business — and pleasure — at a time when that message has never been more vital.

“They’re going to spend money in our economy to advertise our destination for us,” Preiss says. “It’s literally a win-win.”

Reminiscent of ‘The Real World’

In 2001, producers of MTV’s “The Real World” were looking to bring the groundbreaking reality series to Las Vegas for the first time. They had been rejected by casinos up and down the Strip until Maloof, the Palms’ founder, sensed an opportunity and offered up his under-construction hotel.

That season, the show’s 12th, was the first installment featuring cast members who were less concerned with social issues than with partying and hooking up all over the hotel. The result was among the most popular of its 32 seasons on MTV.

Maloof agrees “The Real World” put the Palms on the map. Beyond that, it served as a sort of one-two punch with the “What Happens Here, Stays Here” campaign that launched soon after. Suddenly, Las Vegas was seen as a premier destination for young people looking to have fun, an image the city has yet to surrender.

“What a great opportunity,” Maloof says of the “Love Island” exposure. “For our city, it’s just a constant promotion, which would be great for us. We need that.”

Maloof is stunned by the idea of that much coverage — amounting to seven hours a week — on prime-time network TV.

“It does not get bigger than that,” he says. “That’s unbelievable.”

In its first U.S. season, “Love Island” was not the sort of breakout hit CBS envisioned. Episodes attracted 2 million to 2.5 million viewers. The one bright spot is the fact that those viewers were mostly young — like millennial young — and fiercely loyal. Both of those facts bode well for Las Vegas’ turn in the spotlight.

Also, as you might have noticed, the world was a much different place in the summer of 2019. As much as states have reopened, people still are staying home in ways they haven’t for decades. With the traditional fall season almost certain to be delayed, and no telling when scripted series will return to broadcast TV, “Love Island” is a much more valuable commodity in 2020.

“ ‘Love Island’ feels right in line with the idea of Vegas summer pool parties and fun. … It just made sense all the way around,” Thomas says of the synergy between the show and the city. “The show is going to look and feel like nothing else on television.”

Jason Gastwirth, president of entertainment for Caesars Entertainment, touts the company’s Las Vegas assets as a way of promoting the city around the world. Its portfolio, he says, “continues to attract the attention of the industry and drives more opportunities to showcase our resorts and all of Las Vegas on screens across the globe. ‘Love Island’ at The Cromwell is a phenomenal coup for us and the city.”

Preiss is blunt when it comes to what this level of exposure means at a time when Las Vegas desperately needs it.

“You couldn’t compute the amount that that advertising would cost you, but they’re coming and they’re going to advertise our location for us and pay us to do it,” he says.

Whether it’s “Love Island” and “Shark Tank” or a even a show such as “RuPaul’s Drag Race: Vegas Revue” — the six-part docuseries chronicling the January opening of the spinoff stage show at the Flamingo debuts Aug. 21 on VH1 — Preiss insists getting Las Vegas-based content in front of consumers remains crucial.

“It will be the thing that brings us back when people see that on television,” he says.

“It literally is the best form of advertising we could hope for to get the casinos full again and get people visiting Las Vegas again.”