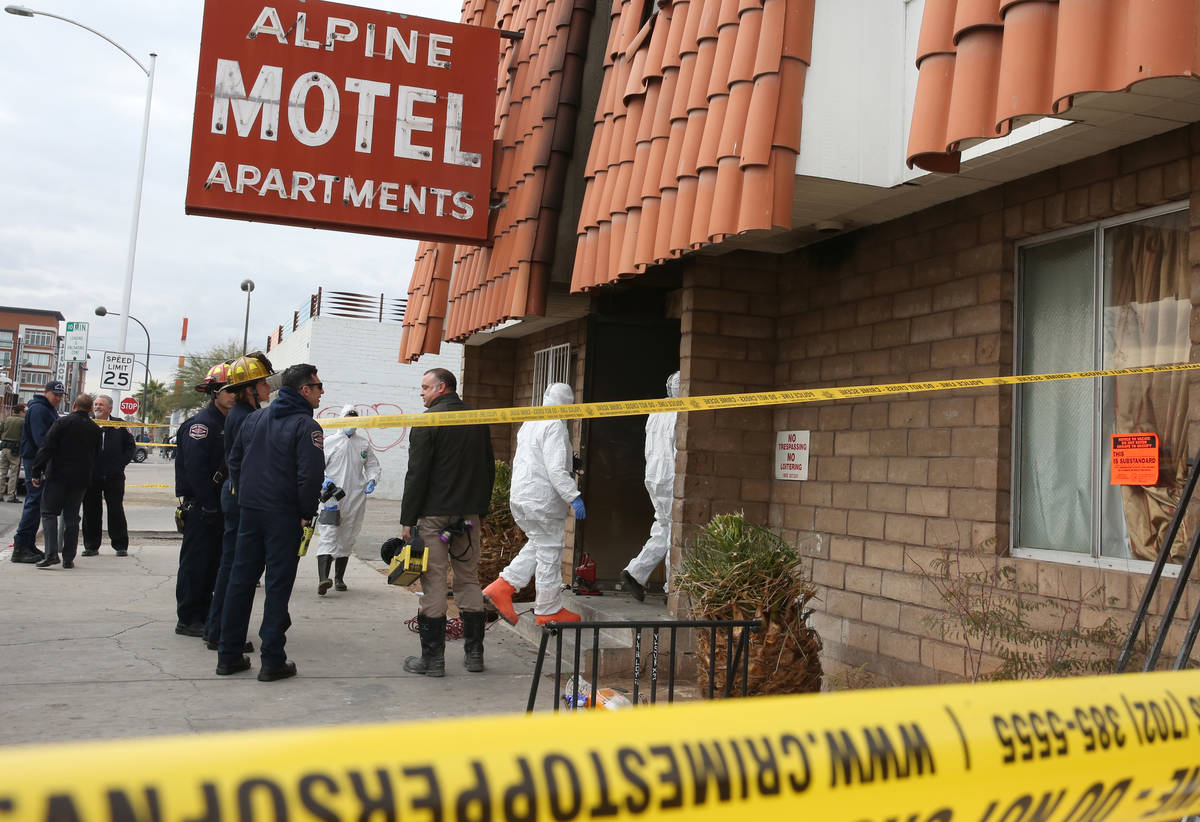 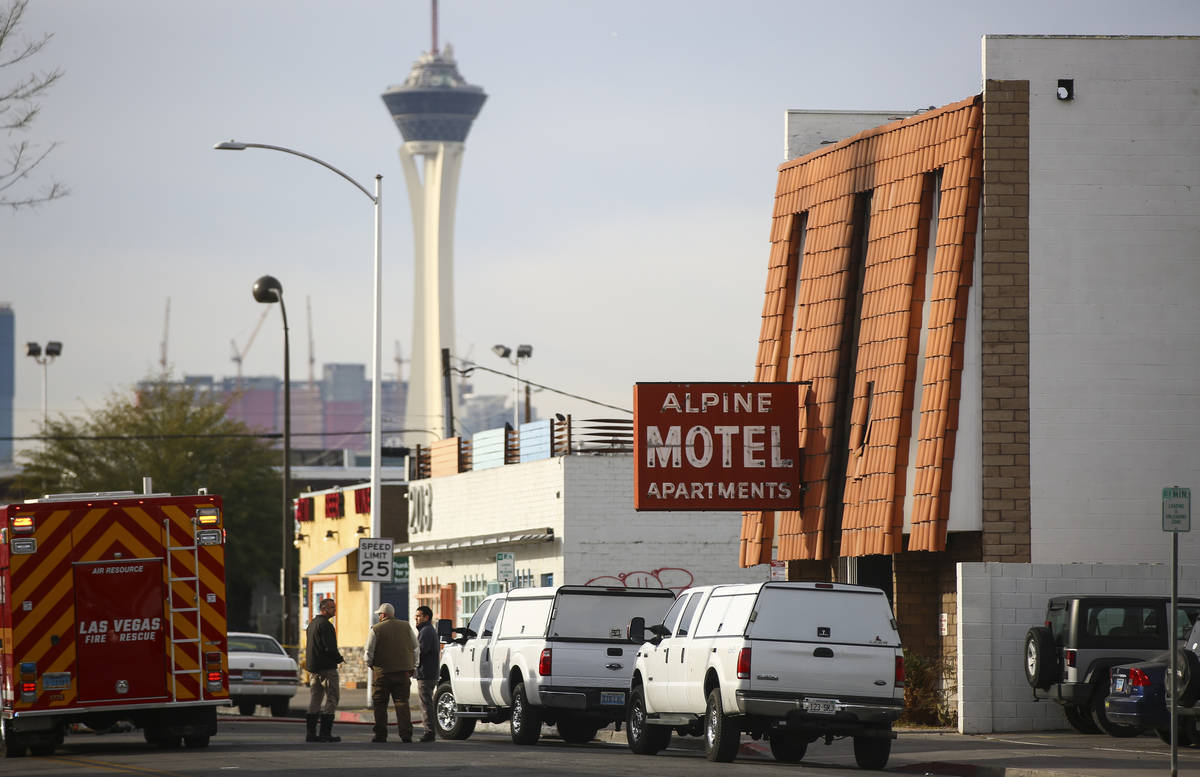 In this Dec. 21, 2019, file photo, Las Vegas firefighters respond to the scene of a fire at the Alpine Motel Apartments that left 6 dead in downtown Las Vegas. (Chase Stevens/Las Vegas Review-Journal) @csstevensphoto 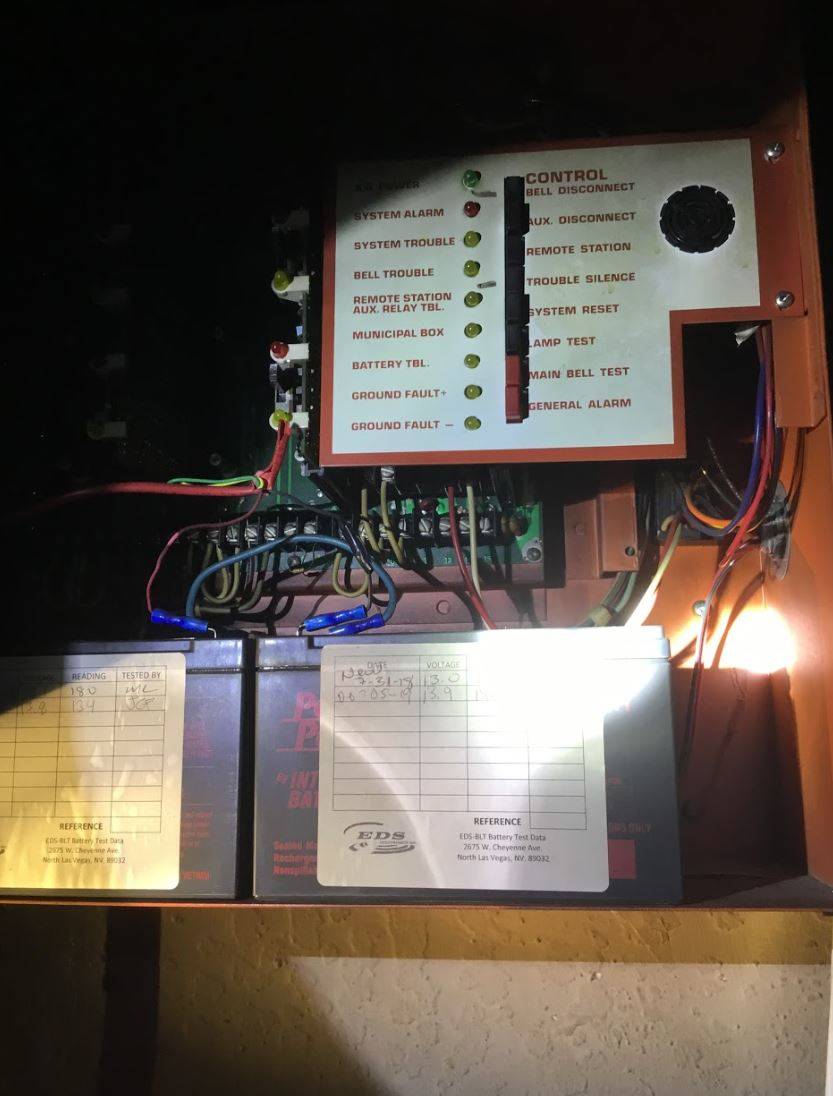 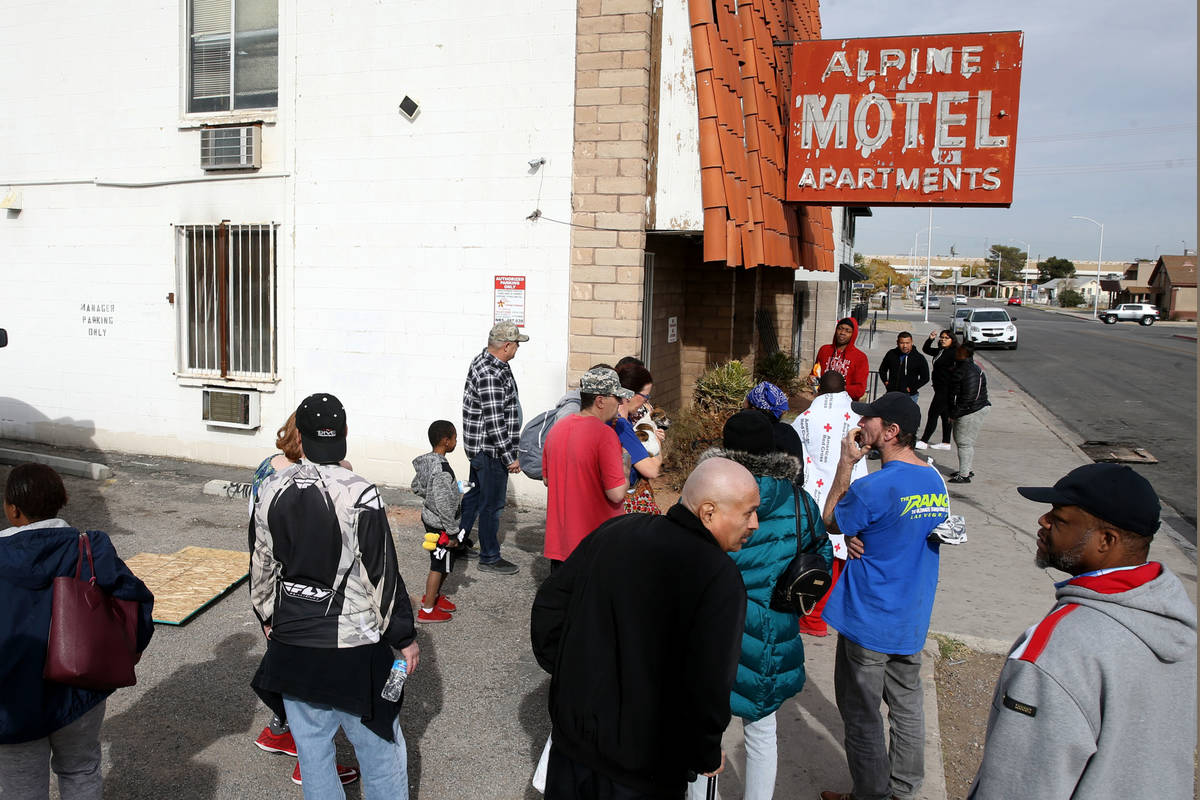 When a deadly, overnight blaze ripped through the Alpine Motel Apartments in December, panicked residents yanked on pull stations to activate the building’s fire alarm.

But no alarm sounded, they told the Review-Journal.

New records suggest the alarm system did not work because it was already active — and had been for about a month, though its audible alarm had been disengaged.

It was first triggered Nov. 28 at 1:47 a.m., though it’s unclear why, according to a system log released to the Review-Journal last week. The detail lines up with August court testimony about the blaze.

The monitoring company, EDS Electronics Inc., then did three things, records show: It called the Alpine’s listed emergency contact, whom it could not reach. It dispatched a guard to check it out, who heard no alarm upon arrival. And it notified the Las Vegas Fire Department, which did not respond to the property.

At some point after the alarm was triggered Nov. 28, it was manually silenced. Without proper intervention, records suggest, the alarm remained on — albeit silent — for weeks, even as it pinged the same “system trouble” alert 26 times leading up to the blaze: “PRIOR ALARM STILL ACTIVE.”

It was not until after the Dec. 21 blaze that EDS apparently realized there had been an actual fire, according to the log, which showed no secondary “FIRE ALARM” alert that morning. Six people died and 13 were injured in the fire, which left dozens displaced.

Investigative photos taken at the scene after the blaze show three buttons on the alarm’s control panel had been pushed down: the “bell disconnect” button, the “remote station” button and the “trouble silence” button, effectively silencing the ongoing alarm, according to a manual on the panel.

The photos as well as the log also show an EDS technician last tested and signed off on the control panel and its battery in June 2019. At the time, the alarm system was functioning properly.

It’s unclear who manually disengaged the audible alarm, which sits in the Alpine’s property management office. But records and testimony suggest it happened shortly after the Nov. 28 activation.

When EDS on Nov. 28 reached out to the property’s emergency contact — listed as “Augustine Aylaya,” likely referring to Augustin Ayala, the brother-in-law of Adolfo Orozco, the property’s landlord — the entry noted, “PHONE NUMBER INVALID.”

So the guard was dispatched for a cursory check, which confirmed there was no active fire or audible alarm.

In the meantime, EDS at least twice more attempted to reach Ayala, the log shows. Each follow-up entry noted, “PHONE WAS BUSY.”

As a result, Erin Stevens, operating manager of EDS, testified in August that the company could not reach the building’s landlord, Orozco, who faces involuntary manslaughter charges in connection with the fire. Malinda Mier, who has claimed co-ownership of the Alpine and whom prosecutors have called an “associate” of Orozco’s, faces involuntary manslaughter charges as well.

Stevens did not testify that the alarm remained active, but silent after the Nov. 28 trigger. But he did confirm that the system was reporting some sort of trouble after the November activation.

“It’s just a general trouble — could be any type of trouble coming from the fire panel,” Stevens said.

A fire alarm service technician who reviewed the system monitoring log for the Review-Journal, however, confirmed that the log appears to show that the November alarm remained active, albeit silent, given the documented “PRIOR ALARM STILL ACTIVE” alerts, which came back daily as a result of daily, timed monitoring tests of the system.

When reached by phone Monday, Stevens deferred comment to an attorney. An attorney representing EDS declined to comment.

In court last month, Orozco’s defense team questioned why EDS did not contact Orozco about the November alarm and continued alerts, noting that EDS had his email on file.

A 2019 email exchange provided to the Review-Journal on Tuesday suggested that EDS had his number as well. The email exchange, with the subject “Alpine Motel,” involved EDS asking that Orozco update his payment information. In his response, Orozco only wrote, “Please call me so I can update it.”

“If they can call a guy to get a bill paid, you’re telling me you can’t call him when you’ve got a problem with the alarm?” Orozco’s attorney, Dominic Gentile, told the Review-Journal on Tuesday.

In court last month, prosecutor John Giordani countered that EDS’ protocol for alarm issues is to reach out to the listed emergency contact on file. Stevens said it is the owner’s responsibility to make sure the emergency contact is up to date.

Giordani last month also submitted into evidence an email from EDS to Orozco dated Dec. 11. In it, a service administrator wrote, “Please fill out the attached contact update form as a guard was dispatched to your property and was unable to reach anyone because the number we have is invalid.”

Orozco did not reply.

While EDS was not able to reach Orozco, the company did reach the city of Las Vegas Fire Communications Center on Nov. 28 about the Alpine alarm, records show.

But the notification was never passed along to the Las Vegas Fire Department’s fire prevention division, which handles inspections. And the department did not dispatch crews to the property.

Jace Radke, a city spokesman, said in a statement that false alarms and tests from alarm companies are common. He noted that when the Alpine alarm was activated Nov. 28, the department did not receive calls from anyone living at the Alpine requesting help or reporting an alarm.

“Please note that Las Vegas Fire & Rescue does not send units out to unconfirmed fire alarm calls from an alarm or monitoring company by policy,” Radke wrote. “This policy is followed by all agencies the city dispatches for in Clark County. Dispatchers generally have no way of knowing what caused the false alarm or activation of the system.”

Radke said the fire department informed EDS at the time that it was not sending a response. He added that, due to a high number of false and nuisance alarms, the call center only notifies the fire prevention division about alarm issues if there are multiple calls from one location.

“Alarm companies are made aware of the protocols for contacting fire prevention,” Radke wrote.

Though EDS did not receive a “FIRE ALARM” alert at the time of the fire, residents called 911 for help.

“Oh, I can’t breathe,” 49-year-old Sandi Jones told a Las Vegas fire dispatcher during the first 911 call, which came in at 4:13 a.m., records show. She said the building was “going up in smoke, and there’s people trapped.”

In the aftermath of the blaze, inspectors noted more than 40 fire code violations at the Alpine, including a rear exit door that had been bolted shut from the outside. One violation noted that the building’s alarm panel appeared to be “strapped” — a makeshift attempt to falsely portray that it was working properly, Las Vegas Fire Marshal Robert Nolan told the Review-Journal in January.

Fire department inspectors had not conducted an annual building inspection of the property since April 26, 2017. They last signed off on the functionality of the building’s fire alarm system in January 2019.