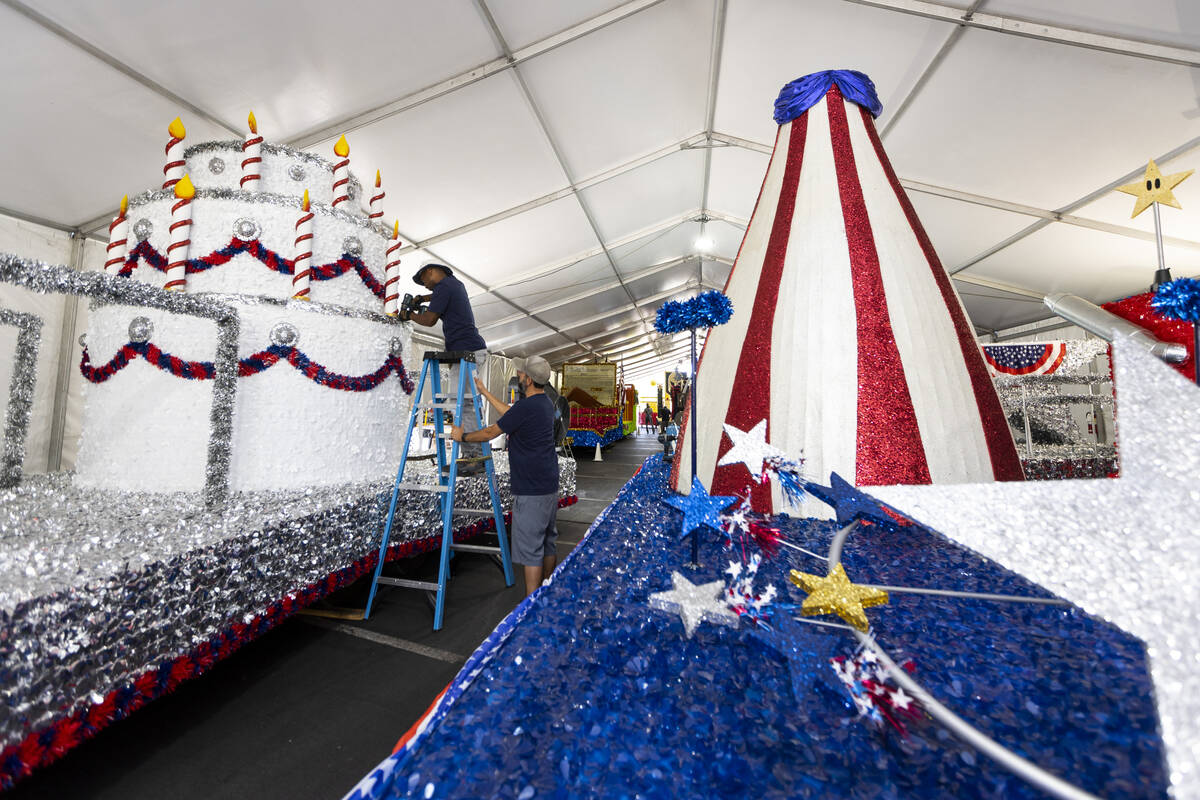 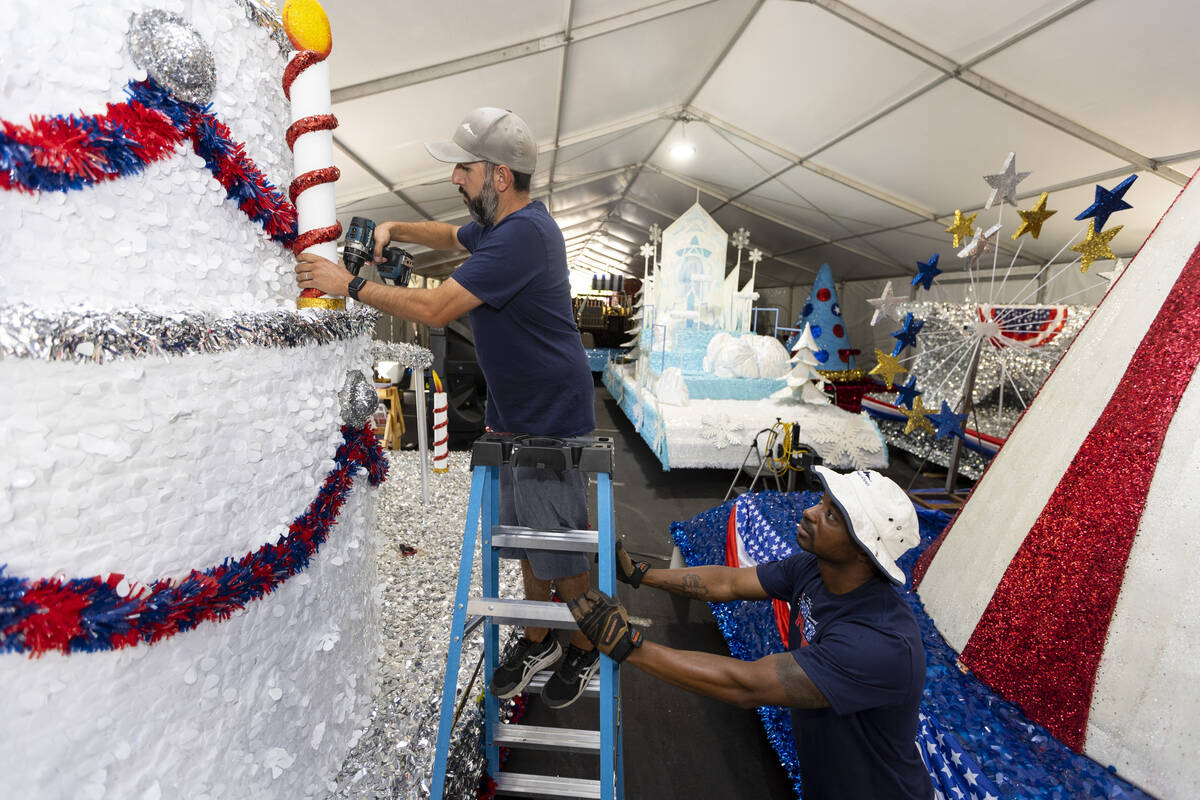 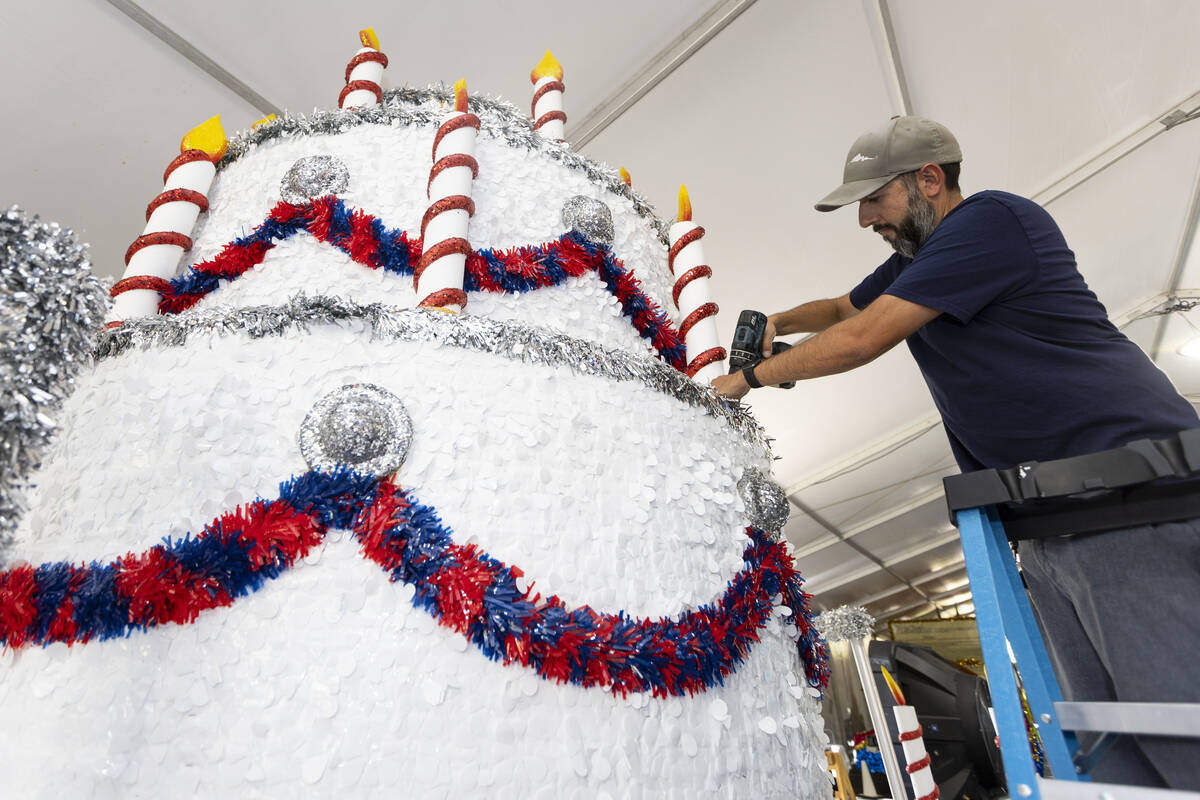 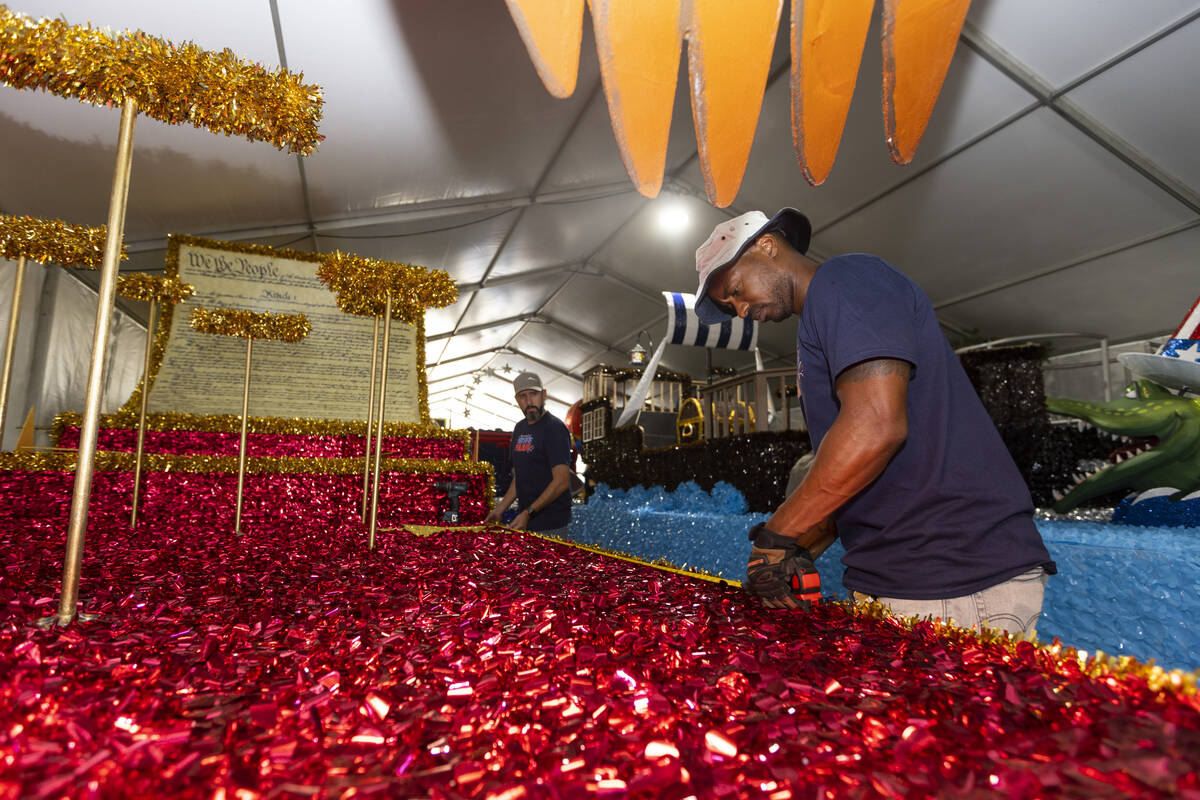 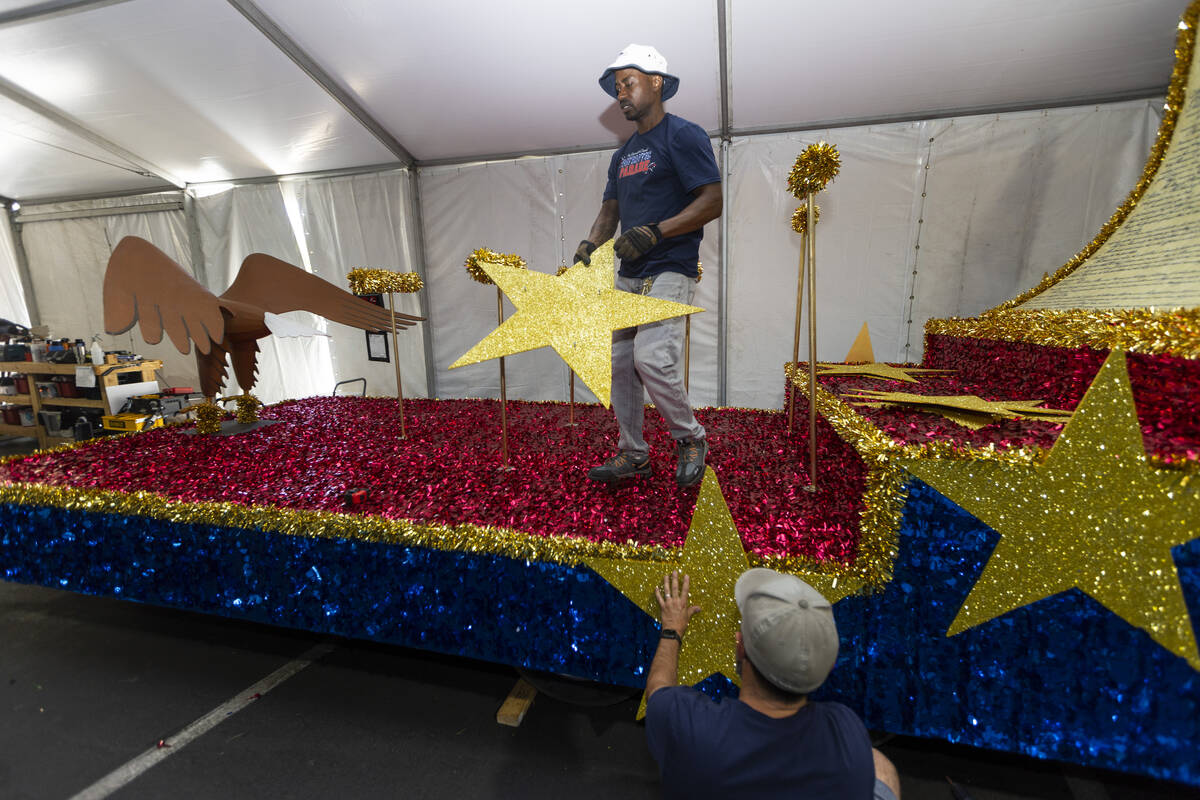 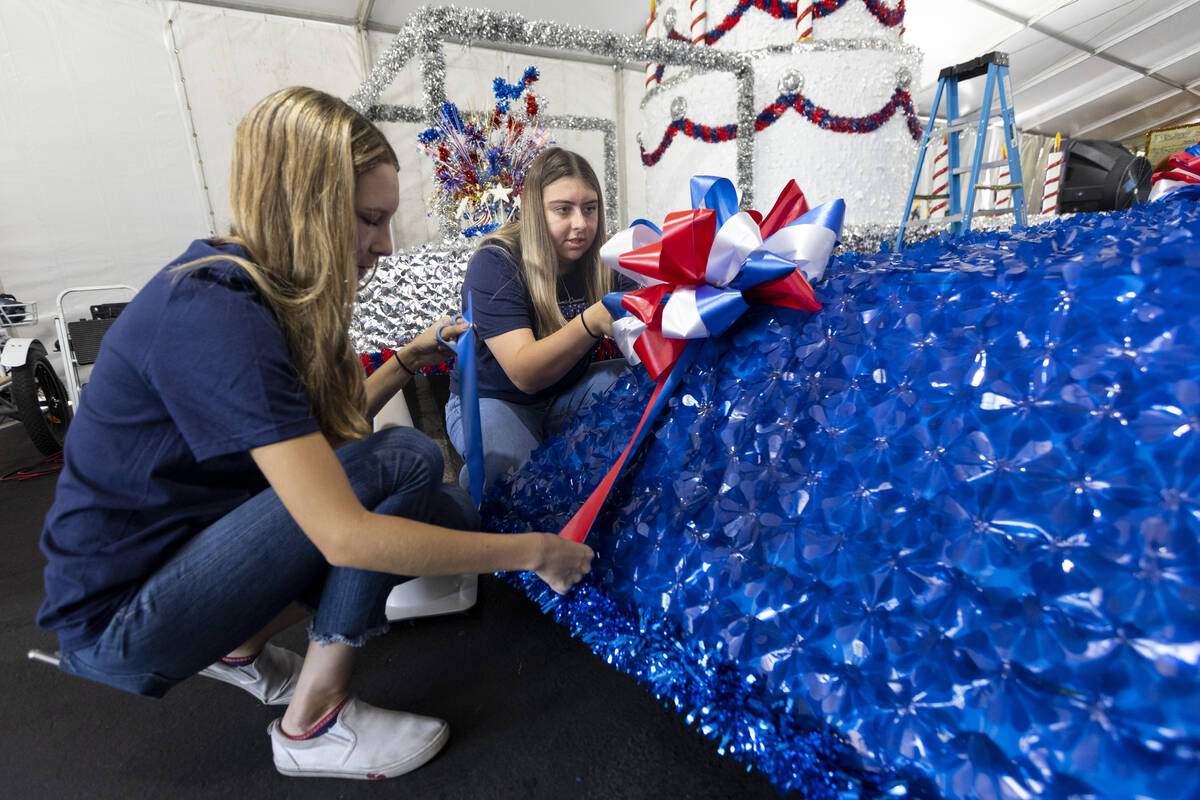 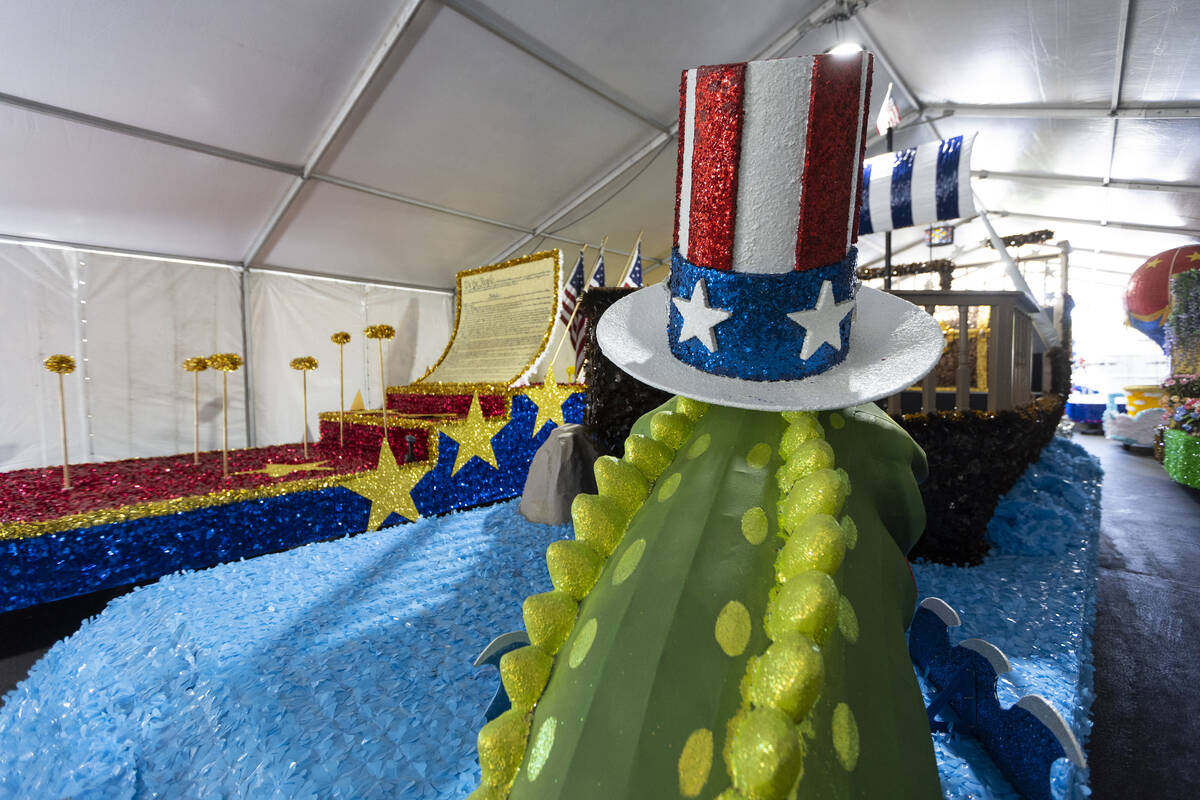 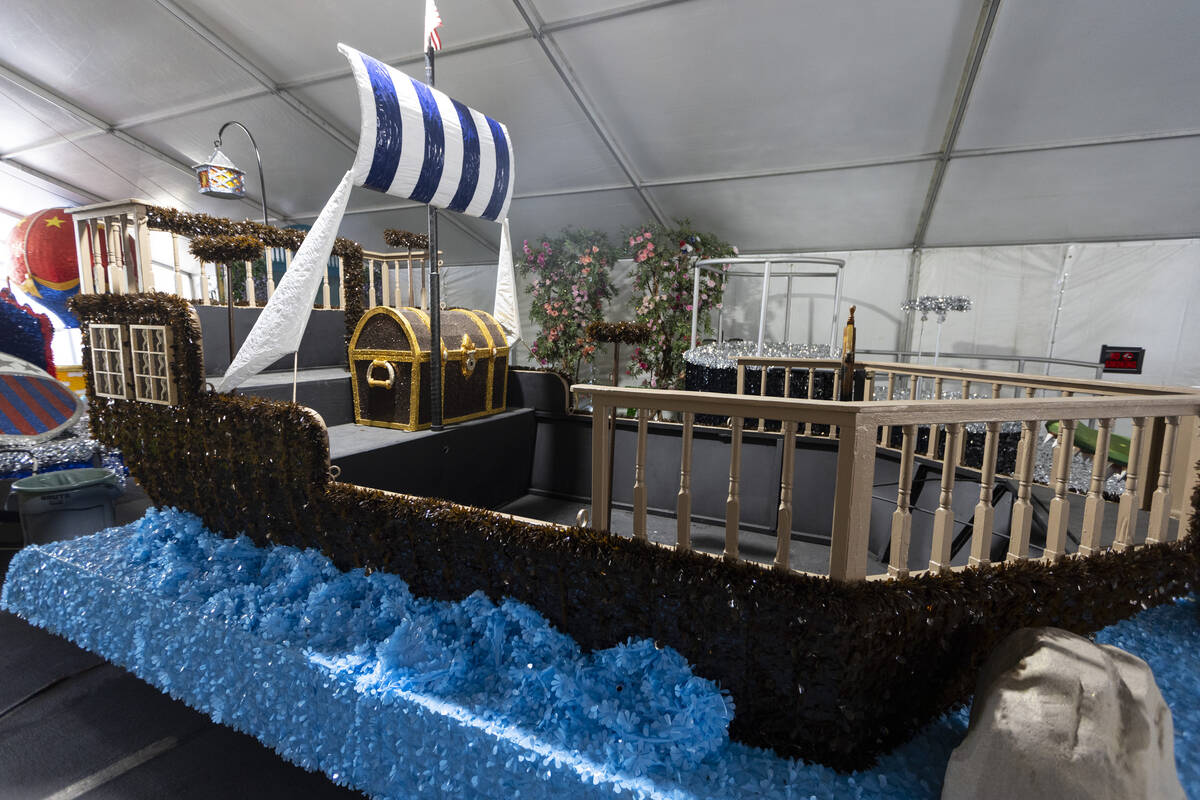 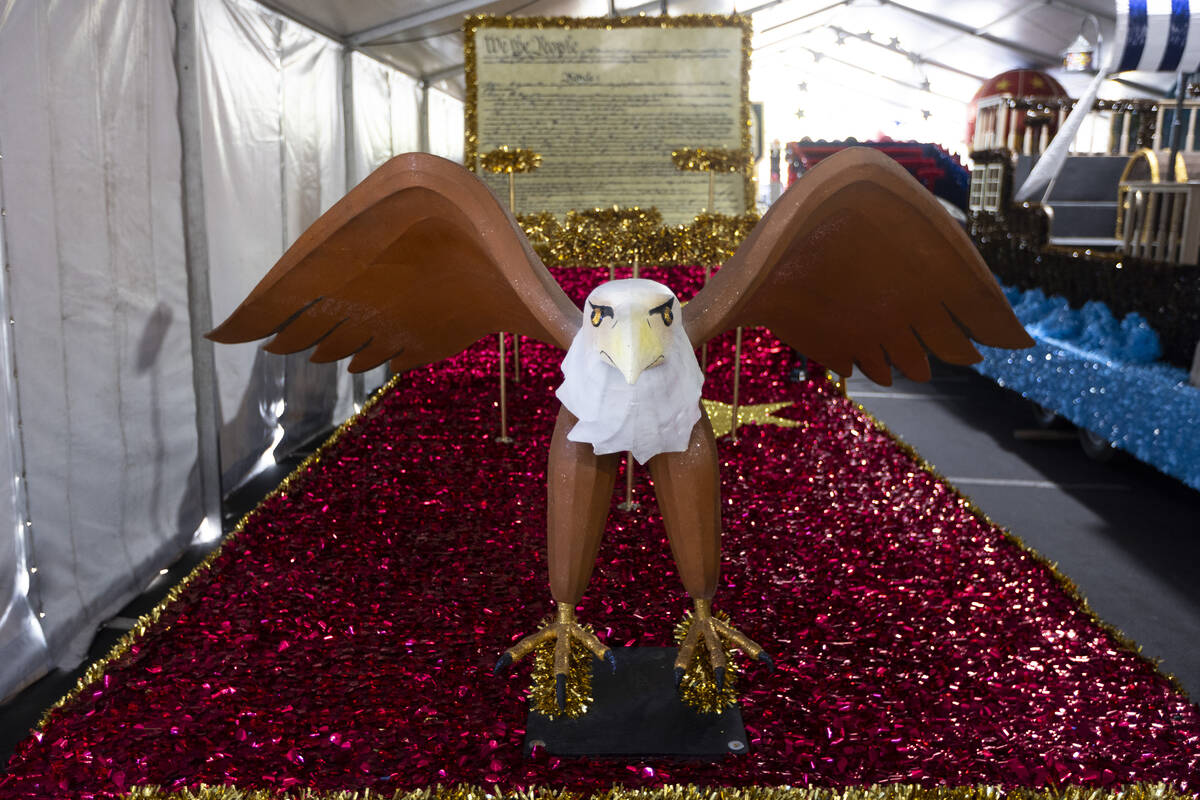 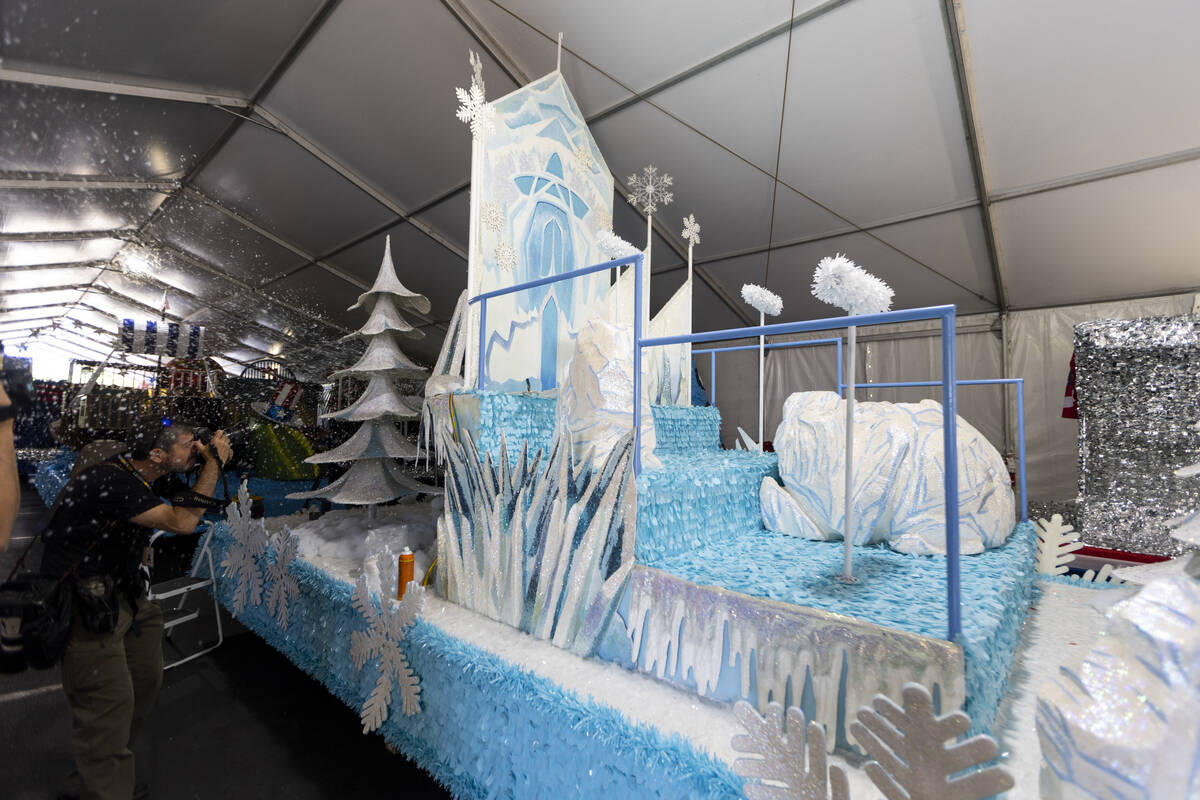 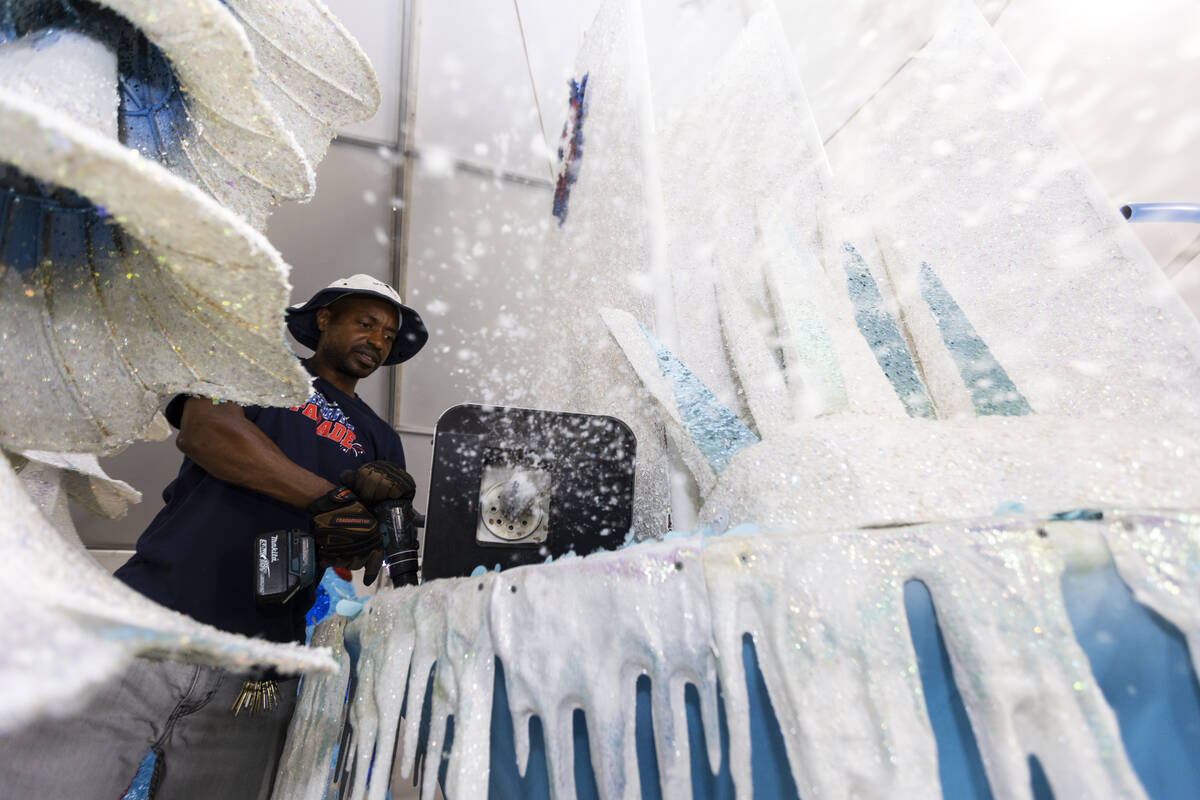 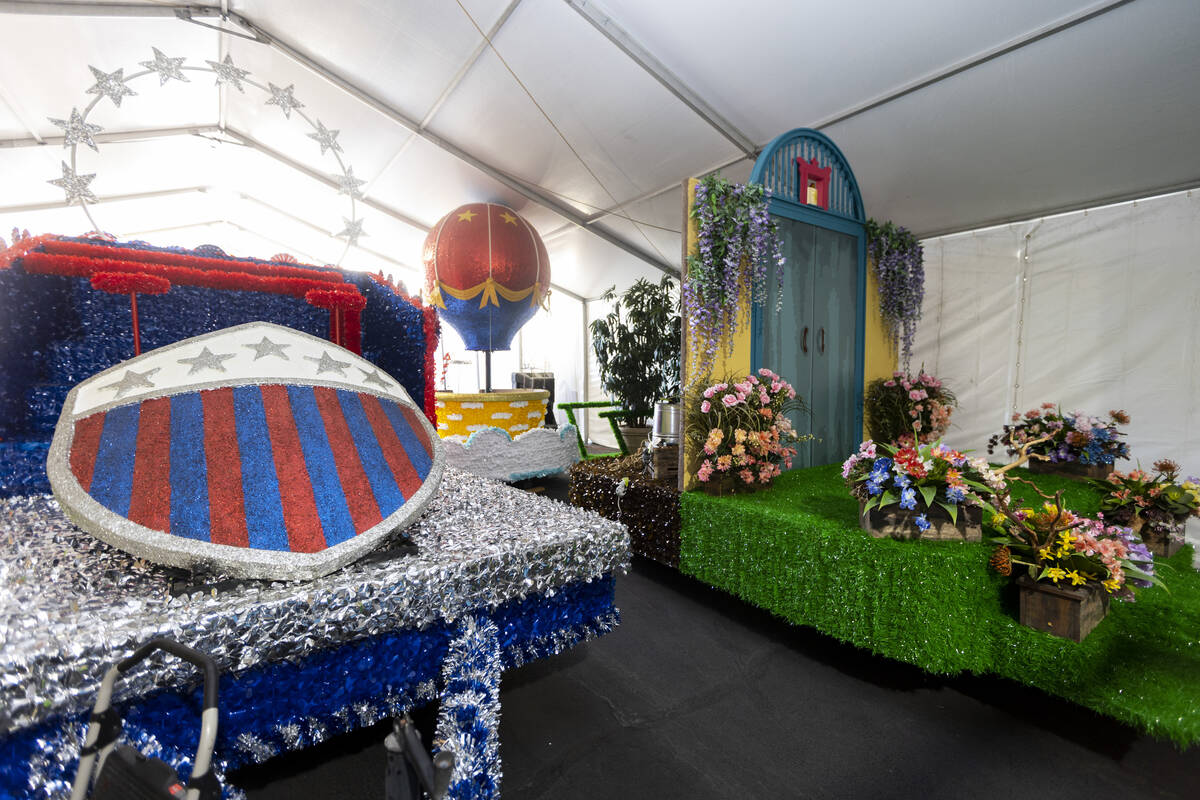 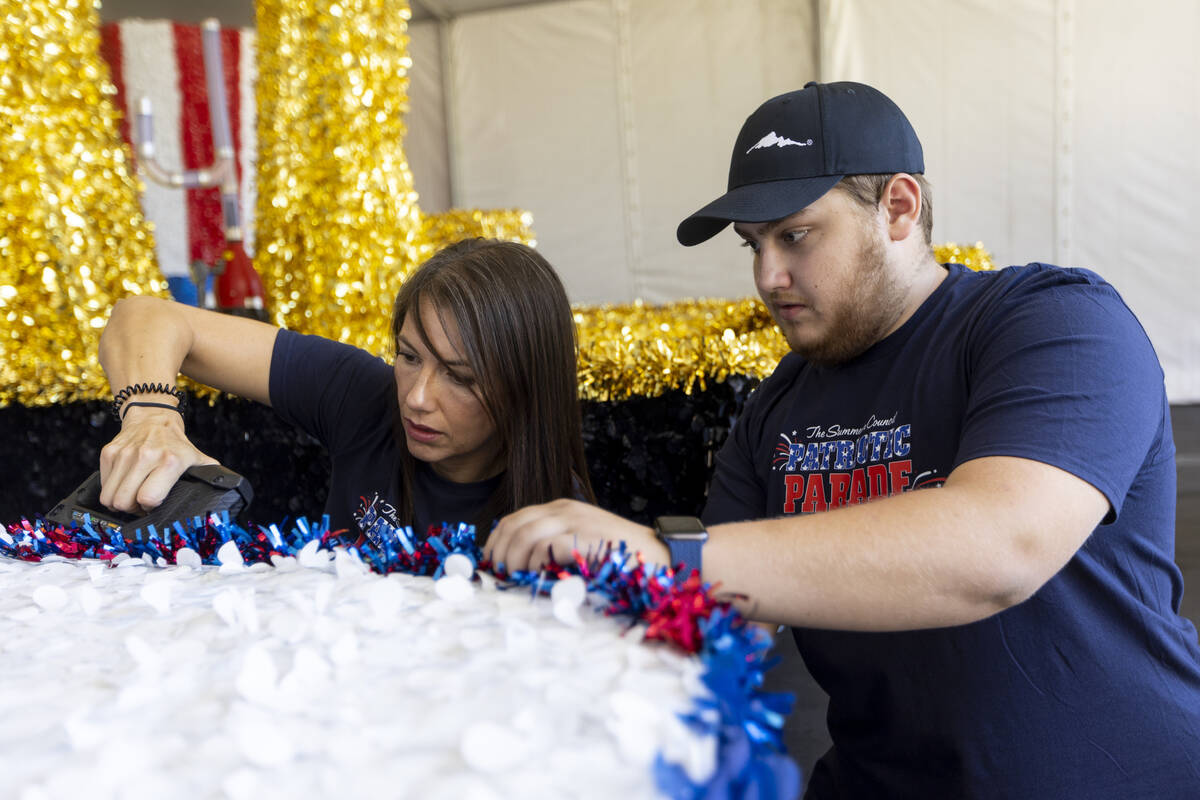 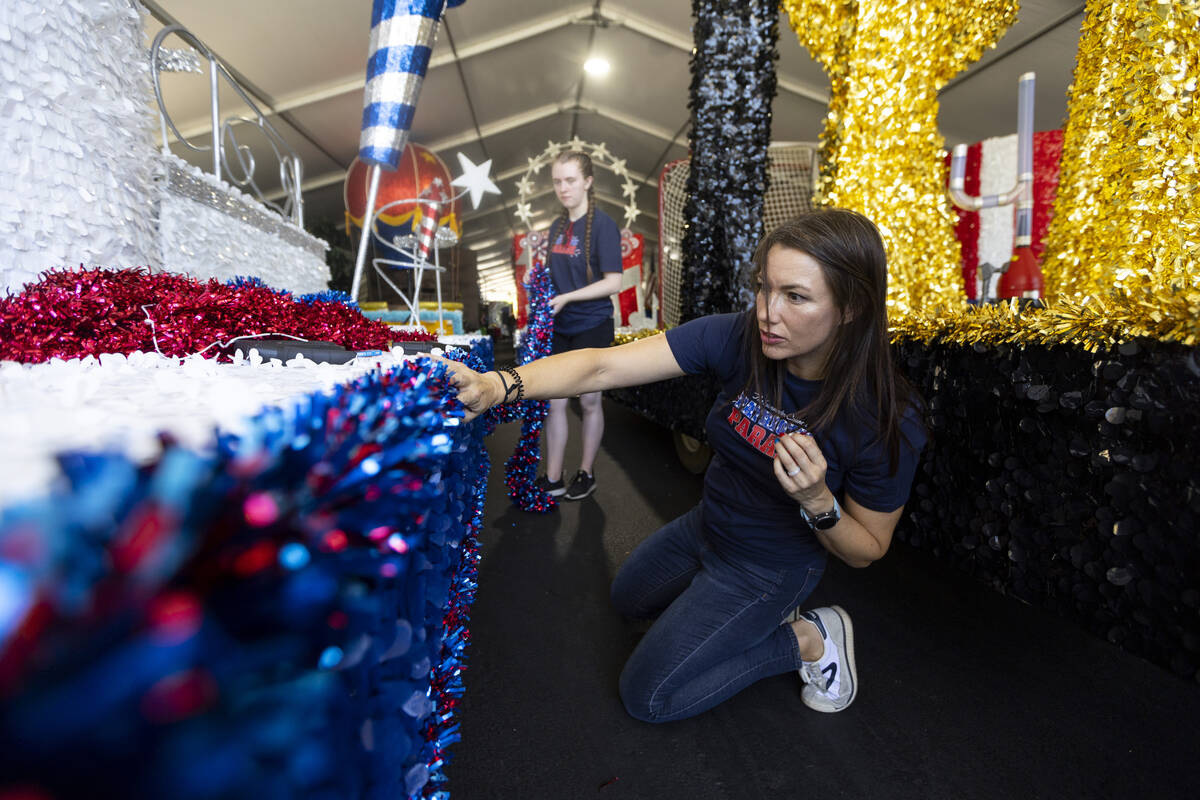 Shielded from the blazing heat under a large air-conditioned tent, a dozen volunteers worked to put finishing touches on about 20 floats set to roll along Summerlin’s Fourth of July parade route.

On Thursday morning, one participant attached cotton to a “Frozen” exhibit as clouds of fog blasted from a nearby machine.

Ben Bell, 19, stapled a strand of floral sheeting into the trailer that will haul the Hulk, Captain America, Thor and other “Avengers” characters, who on Monday morning will dance to MC Hammer’s “U Can’t Touch This” for tens of thousands of people expected to dot the 1-mile route.

Bell has performed at the Summerlin Council Patriotic Parade since he was a child. This year, he helped put it together for the first time.

“I just love being in the parade, but I also love working it, too,” he said. “So, it’s a different balance,” he said, guessing that he had worked about 80 hours in the past week.

The yearly parade has entertained scores of attendees for nearly three decades. This year’s event will be back at full scale after the pandemic forced organizers to host it virtually and limit attendance last year.

Attendance is estimated at about 50,000, said Summerlin Council member Tommy Porrello. The council is the nonprofit arm of the Summerlin Community Master Association.

The 70 entries include 20 “giant” balloons, a choir, a marching band, mariachis and displays representing Las Vegas pro teams: Golden Knights, Aces, Aviators and, for the first time, the Raiders.

The Knights’ Logan Thompson and Zach Whitecloud will ride on a black and gold float that will hold a hockey goal and an oversized puck, according to organizers.

The spirit of the holiday is not in the back of organizers’ minds, Porrello said next to a float decorated by a bald eagle and a mammoth U.S. Constitution. Local active military members will ride on that trailer, he said.

“The community really appreciates the blend of patriotism and pop culture,” Porrello said.

A cake-themed exhibition titled “Very Vegas Birthday Party” will “of course” have an Elvis impersonator, said Porrello, who displayed eagerness when he spoke about a float based on the longstanding Mario Kart video game he hopes appeals to multigenerational families.

Porrello, who has helped with the parade for 15 years, said four generations of his family will be among the attendees.

He said he enjoys learning about people who attended the parade as youths and returned with their own children.

Bell, the volunteer, who has been participating in the parade for years as “Star Wars,” “Mary Poppins” and “Frozen” characters, said he loved seeing the smiling faces in the crowd looking back at him, including his parents.

“We would love for you to come down and just check it out,” Bell said. “And we’ll see you years to come and years to come, because you’ll love it that much.”

The procession will start at the corner of Hillpointe Road and Hills Center Drive. The route goes south toward Village Center Circle, then west on Trailwood Drive before ending at Spring Gate Lane.

Porrello, who said the full parade experience will be visible to every attendee, encouraged them to show up early and to bring plenty of water and sunscreen.

Attendees who want to save a spot along the route should not do it earlier than 24 hours before the two-hour parade kicks off at 9 a.m. Monday.