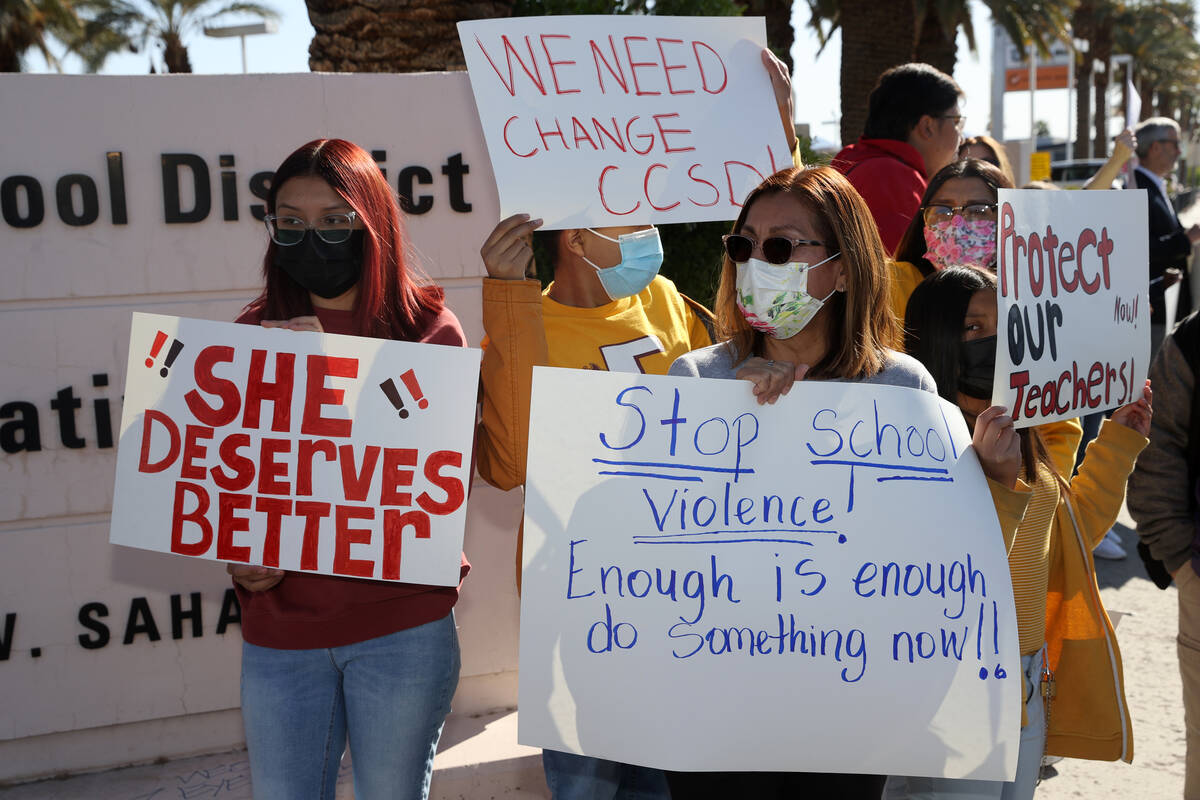 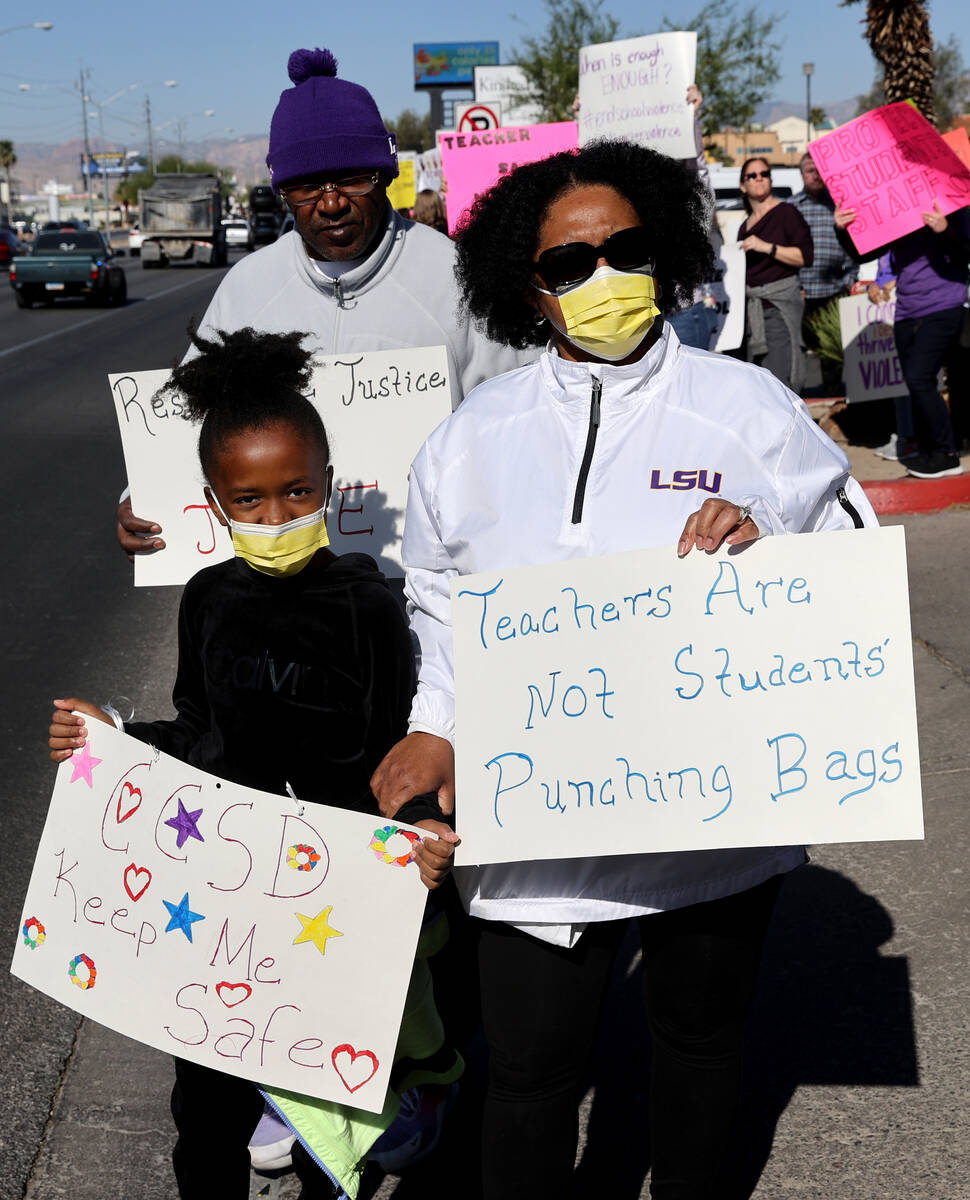 Kaitlyn Bass, 9, her father Alandre Bass and her mother who declined to give her name, protest school violence with parents, teachers and students during a demonstration outside Clark County School District headquarters on West Sahara Avenue in Las Vegas Wednesday, April 13, 2022. (K.M. Cannon/Las Vegas Review-Journal) @KMCannonPhoto 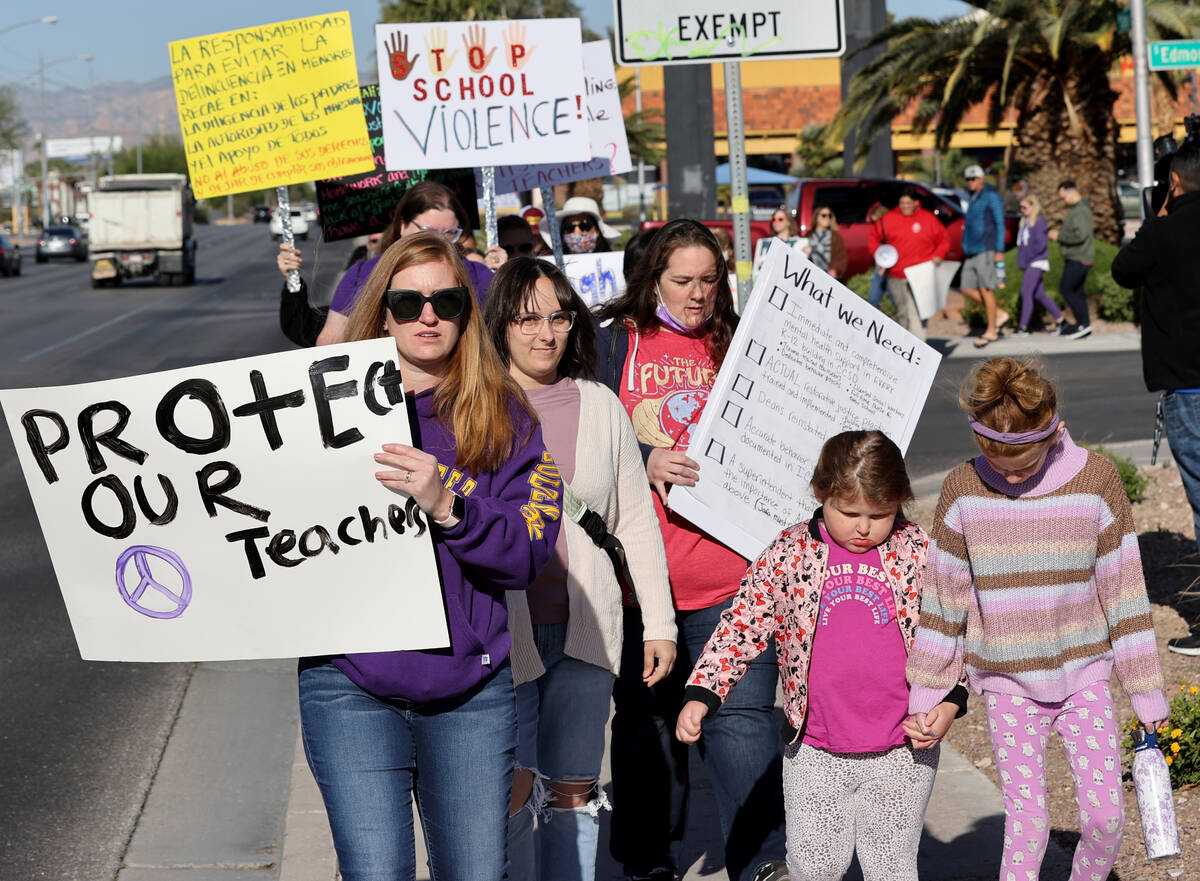 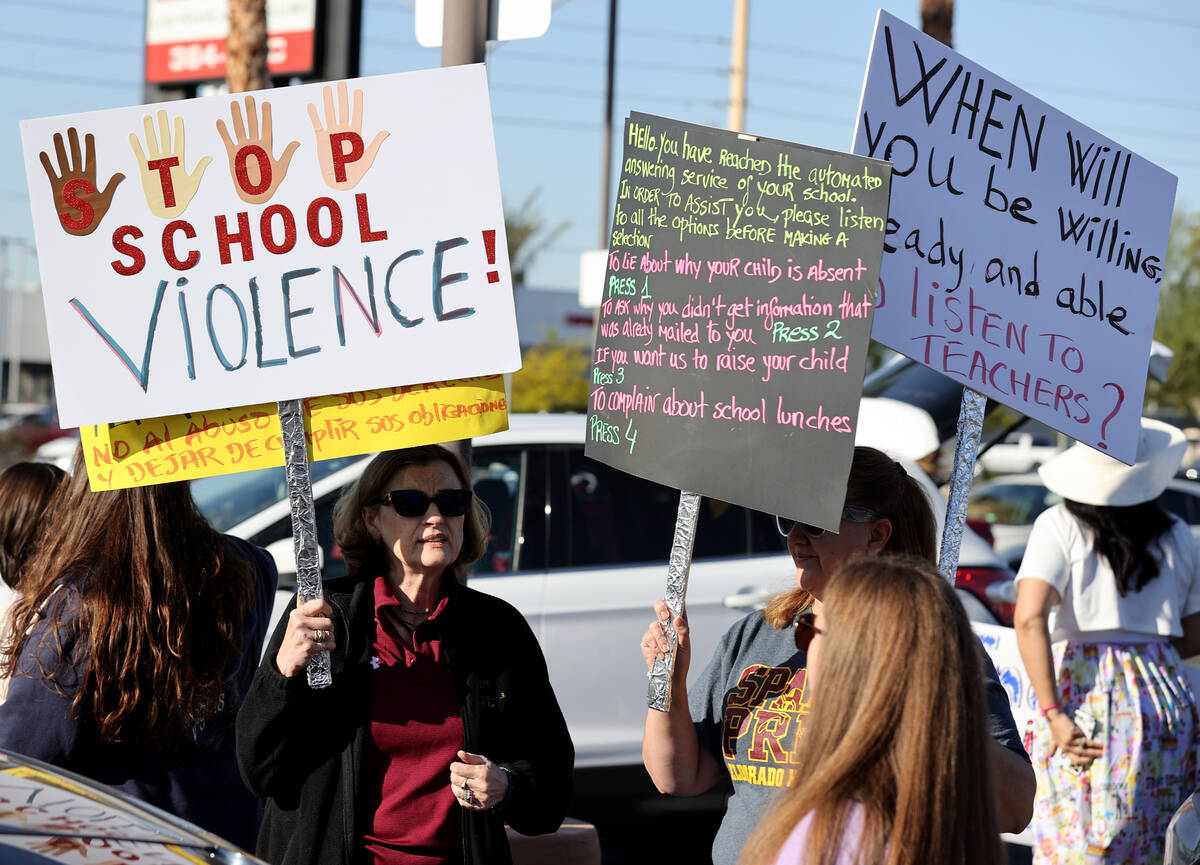 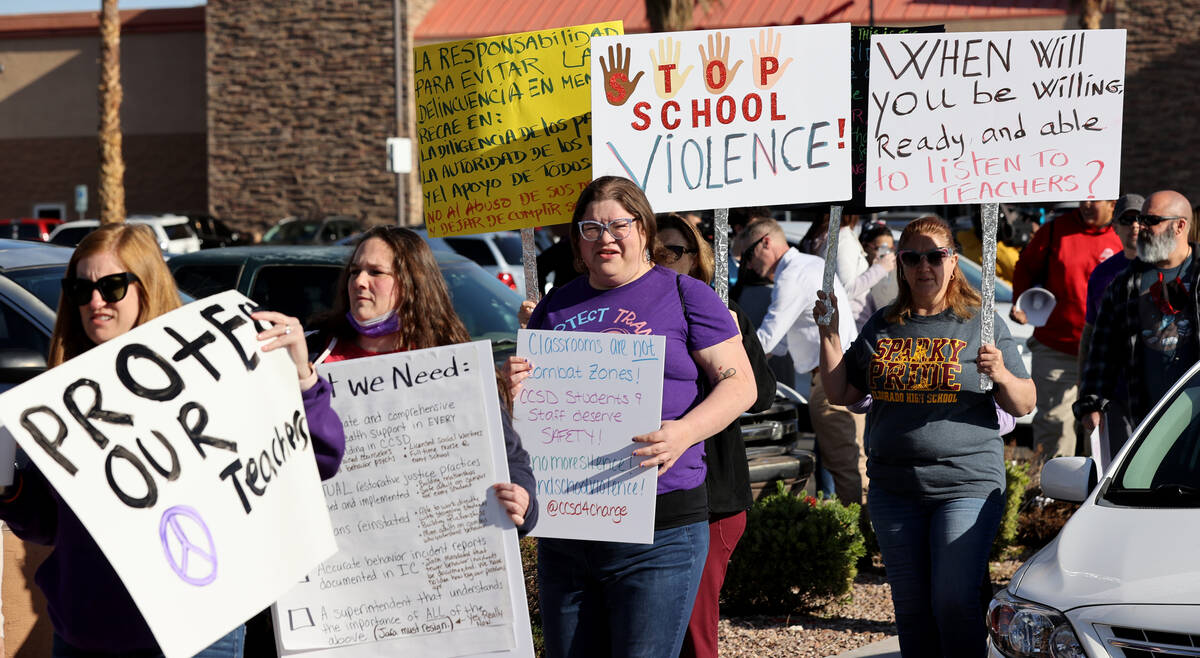 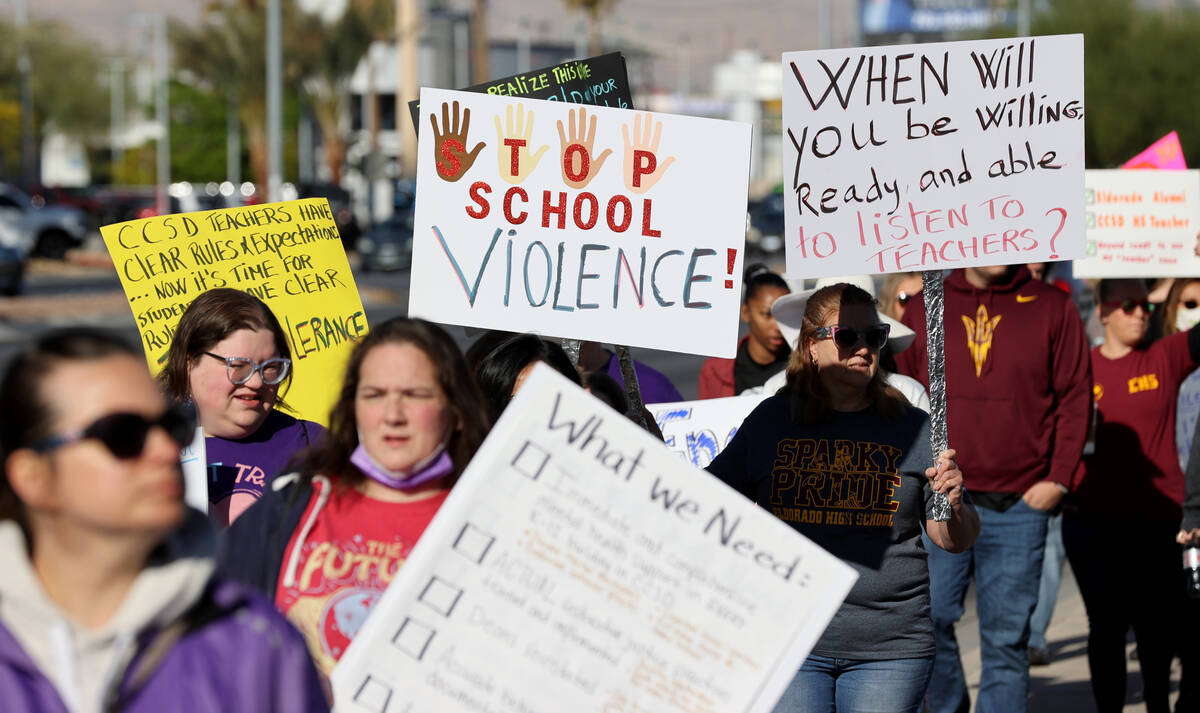 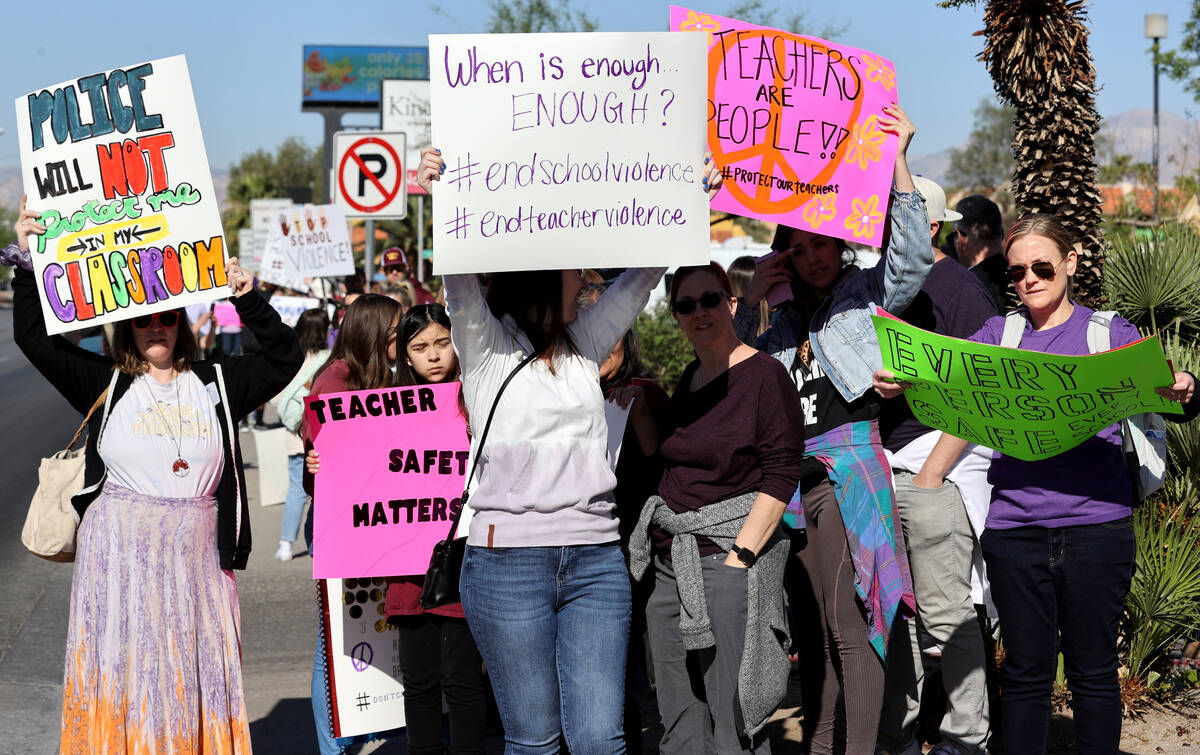 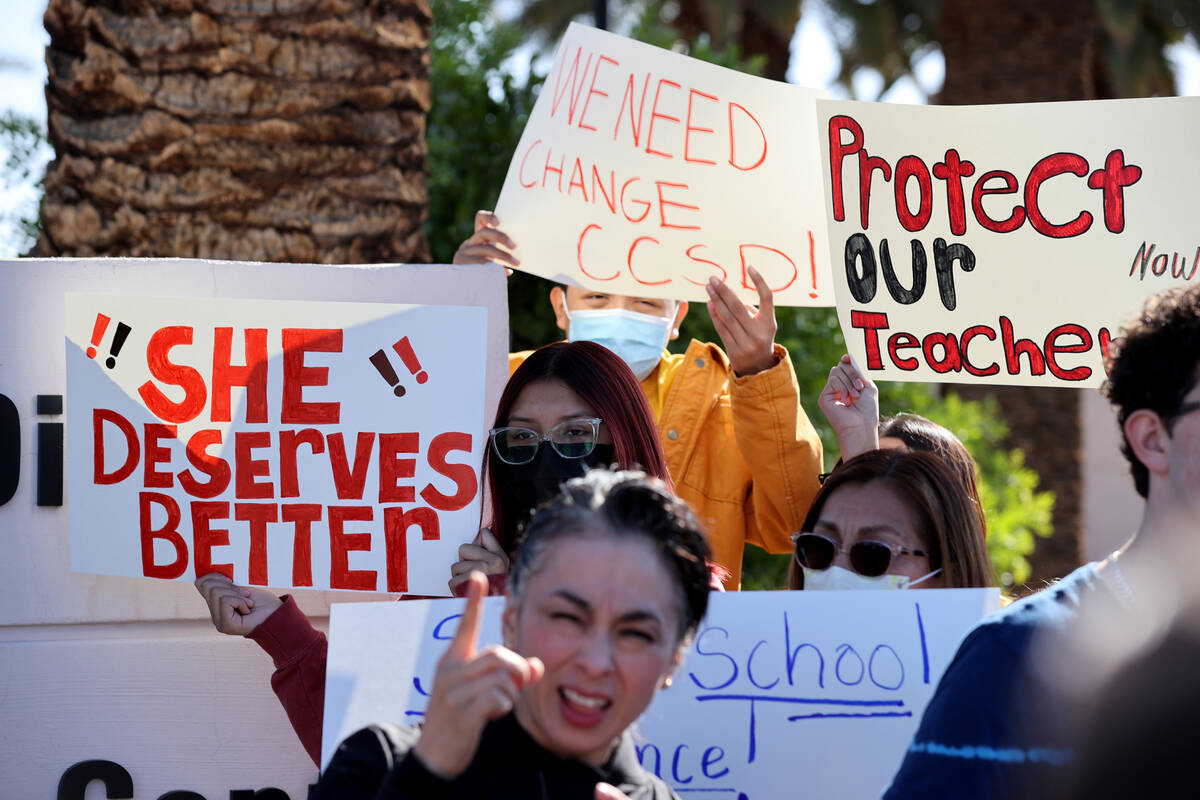 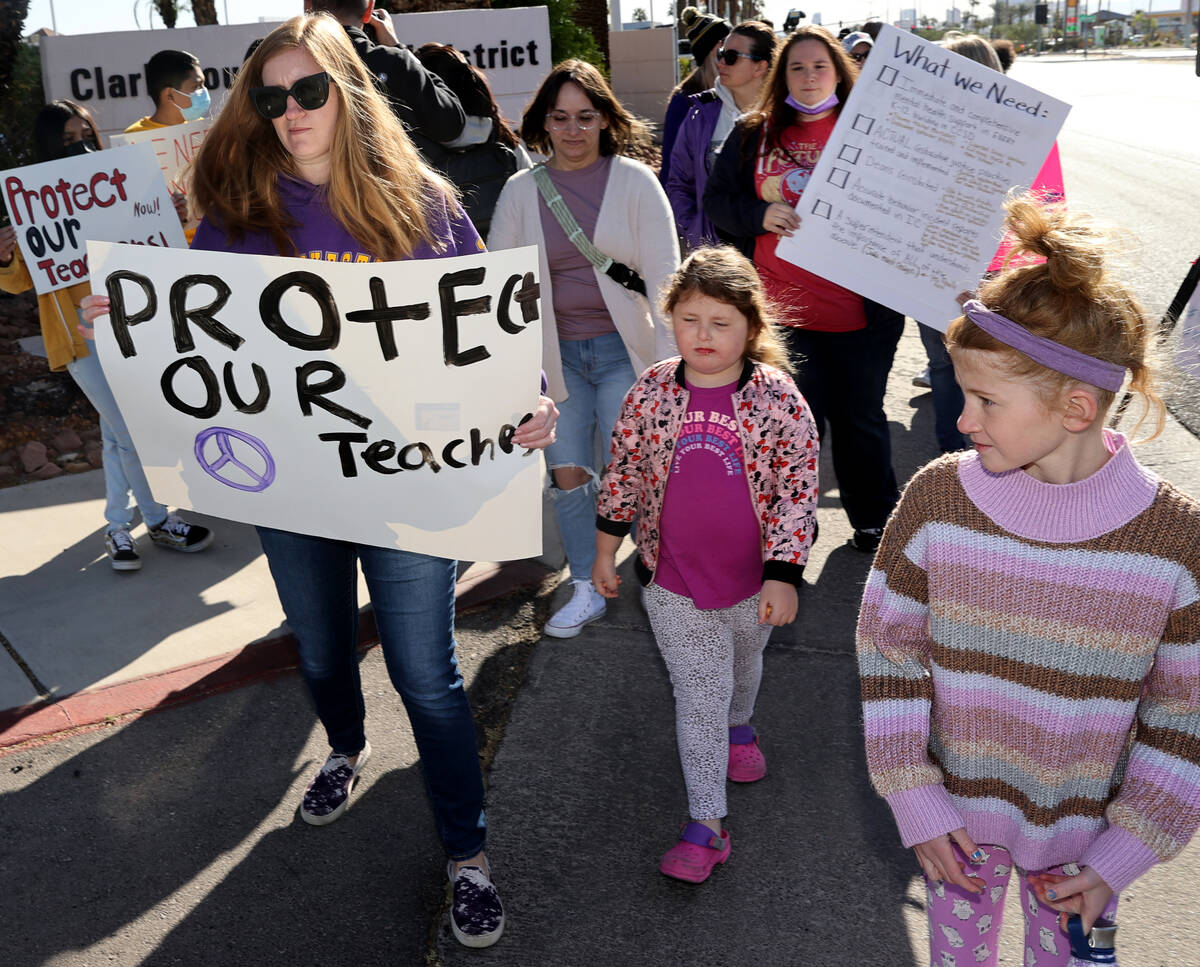 Five school district teachers said they organized the protest after months of attending school board meetings and warning of rising violence on campus.

“We’ve been warning the district for months that if we didn’t do something about school violence that someone was going to get killed, and now someone almost died,” elementary school teacher Vicki Kreidel said Wednesday. “We want to make sure they hear us. School violence is a problem.”

Last Thursday afternoon, police said, an Eldorado teacher was beaten and sexually assaulted on campus by a 16-year-old student. The teacher told police that Jonathan Martinez Garcia asked her, “Can’t you just die already? Hurry up,” while throwing cabinets on her, kicking her and strangling her.

Clark County schools are on spring break this week, but Superintendent Jesus Jara said in a news conference Tuesday that he expects each principal to have an assembly with students at all middle and high schools next week reiterating the student code of conduct and warning of expulsion hearings for those who cause fights on campus.

“You come to school to learn,” Jara said Tuesday. “That has got to be the crystal clear message. Our staff needs to feel safe.”

Teacher Sarah Comroe laid out her demands for the school district during Wednesday’s protest. She asked for working intercoms, classrooms buttons, phones and cameras and a release of a districtwide policy on what to do if there’s a fight in a classroom. Comroe also asked for a conflict resolution program that would be taught to students and staff.

The district announced Tuesday that it would update its camera systems and classroom communications with instantaneous alerts, similar to a panic button, allowing adults, teachers and staff to contact administrative staff and first responders from their location.

Canyon Springs High School teacher Jamie Tadrzynski said in her seven years in the school district the violence has only gotten worse. Now she fears that she and her co-workers could be physically harmed in a classroom.

“Does someone have to actually die for this change to happen?” she asked Wednesday. “Right now we have a new teacher in the hospital, and this is not the first teacher that’s been sent to the hospital this year because of student violence.”

The Clark County School District — the fifth largest in the country — has seen 5,700 calls for service regarding fights, batteries or assaults, 28 firearms confiscated from campuses, and 1,300 combined incidents where arrests and citations were issued on school campuses since the start of the school year, according to CCSD Police Chief Mike Blackeye.

CCSD Police has asked its law enforcement partners in the Las Vegas Metropolitan, Henderson and North Las Vegas police departments to show increased presence in and around schools through the end of the school year.

“This school year is shaping up to be the busiest in our department’s history, in our 40-year history,” Blackeye said Tuesday.

High school teacher Ericka Carrillo stood with her 9-year-old daughter, Julissa, on Wednesday morning. Julissa’s sign read, “I cannot thrive in violence. I deserve safe schools.” Carrillo said she’s been threatened by students before and that this has been the scariest of her five years working for the school district.

“I don’t feel safe,” she said. “What happened to the teacher at Eldorado breaks my heart and makes me realize it can happen to anyone.”

Julissa said she has experienced “tiny fights” at school and seen students destroying property and pushing each other around.

Middle school teacher Tammy Henlon said she has been grabbed by students before and now keeps her head on a swivel because of the weapons confiscated on campus and the fights both reported and not reported.

“You see it happening day after day, and it’s getting more and more prevalent in more schools,” she said.

Henlon stood at the protest Wednesday with her father, Bill Henlon, a retired teacher of more than two decades. Bill Henlon said he doesn’t approve of the school district’s plan to enact consequences only for physical altercations.

“Why do we have to wait for someone to get hurt before we do something?” he asked.

Trustees Danielle Ford and Linda Cavazos attended as concerned parents, the pair said. Near the back of the crowd, Brian Rippet, president of the Nevada State Education Association, cheered and chanted with the crowd.

“Its critical that we have safe environments for our students to learn and now for our teachers to be able to teach,” Rippet said.” It’s one of the critical needs along with you can’t learn if you’re hungry: You can’t learn or teach if you feel unsafe.”