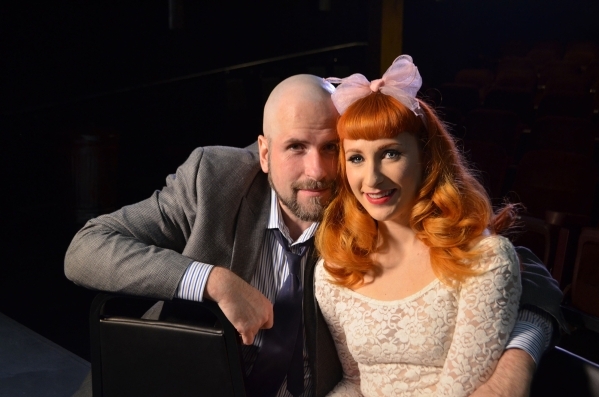 Troy Heard cuddles with his wife Kady during a chat about their relationship at the Onyx Theatre Jan. 19, 2016. Ginger Meurer/Special to View 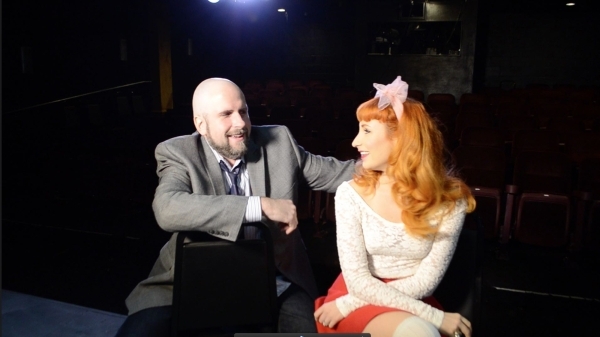 Troy and Kady Heard sit on stage at the Onyx Theatre Jan. 19, 2016. Ginger Meurer/Special to View 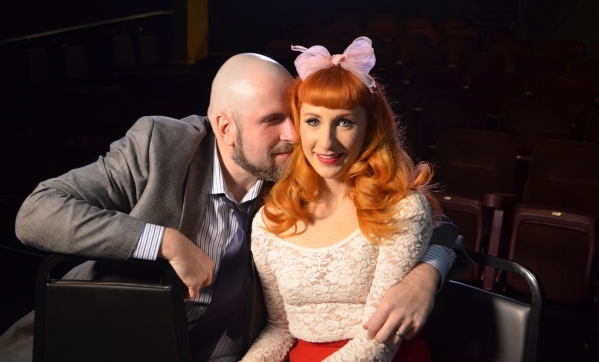 Director Troy and singer, dancer and actress Kady Heard met in a theater and continue to dedicate their lives to the theater. Ginger Meurer/Special to View 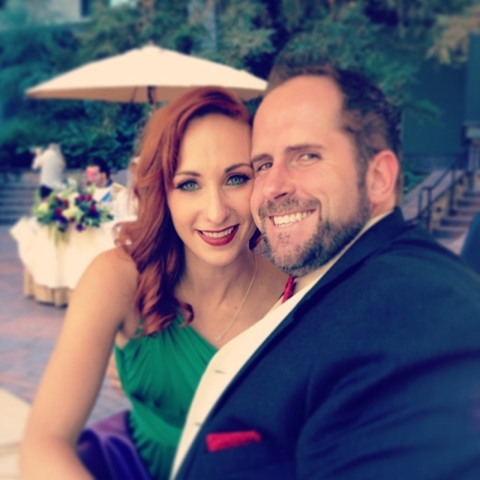 Kady and Troy Heard, photographed at a friend‘s wedding in 2013, were married Oct. 22, 2012. Kathryn Winston/Special to View 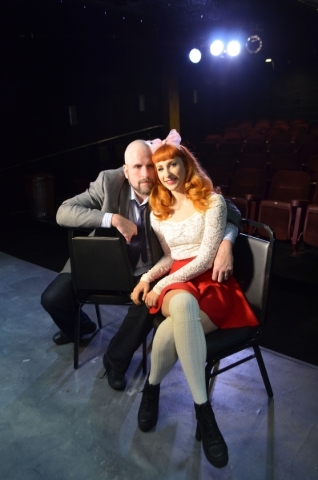 Troy Heard cuddles with his wife Kady during a chat about their relationship at the Onyx Theatre Jan. 25, 2016. Ginger Meurer/Special to View 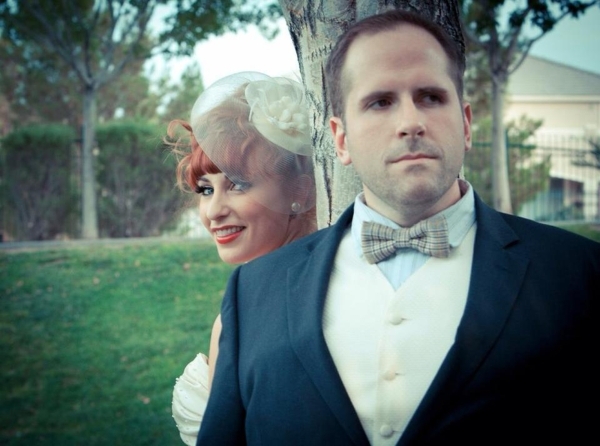 On Valentine’s Day 2010, Kady Kay was dancing her heart out at Bally’s even though she was hurting.

“I had just broken up with somebody, and I remember being on stage going, ‘It’s Valentine’s Day, and I’m single,’ and I didn’t know my future husband was out in the audience.”

“I saw my wife’s boobs before I even met her,” Troy Heard said.

“Oh, great,” she responded rolling her eyes, but smirking.

Though their paths had crossed at “Jubilee!”, Southern Highlands-area residents Troy and Kady Heard didn’t meet until Oct. 21, 2011. This time, he was the one in the spotlight.

Anita Bean Sande invited Kady to see a show she was in at Las Vegas Little Theatre and insisted Kady meet the director.

“I sat through the show, and as I was exiting the theater, right as I was about to leave, I heard someone say, ‘You have to be Kady Kay.’ And it was that guy,” Kady said pointing to Troy.

Troy’s version is that Sande told him all about Kady: ” ‘She’s a redhead. She used to be a showgirl. She cocktails,’ and I was thinking, ‘OK, so she’s going to be one of these stereotypical old Vegas (women), just leathery face with cotton candy hair,’ ‘Hi, I’m Kady Kay,’ ” he said, mimicking a heavy smoker’s rasp.

But Kady, a triple-threat who can sing, dance and act, and a woman who prefers comedic character roles, was not what he expected.

“Everyone was leaving, the theater cleared, and I turned around, and I am not an impulsive person,” he said. “I turned around and saw this woman and said, ‘You must be Kady Kay.’ Out of nowhere. I would have never done that because ordinarily I am very shy. But that was it. We chatted, and we have not spent a day apart in one way or another since then.”

“For me, it was definitely real infatuation at first sight,” Kady said. “I knew I was very attracted to him and his personality and his aura and everything.”

For Troy, things were more complicated.

Troy said it’s hard to pinpoint what attracted him to Kady the most. His quick answer is, “Everything.”

“Like grits and gravy. I don’t know. There was something that felt right to me when he was talking to me,” Kady said. “Something about his smile. It felt immediately like home. It was the strangest feeling ever.”

Troy and Kady insist they never really dated; they just were. The connection was real and virtual.

“This sounds so silly. You know what the Facebook poke is?” Kady asked as Troy burst out laughing. “We would poke each other back and forth all day long. Just literally from sunrise on down.”

“Then we started talking more,” Kady said. “But that’s definitely how we got each other’s attention.”

“It’s the equivalent of a third-grade boy hitting a girl on the shoulder and running away,” Troy said.

Kady still remembers the day, five years ago, when she knew Troy was “the one.” It was at Mount Charleston.

“I love to hike when I’m up there,” she said. “That’s my favorite thing. And I guess he wasn’t totally planning that because he wore Converse.”

“And there was snow,” Kady added. “And he was basically tobogganing the whole time and falling, and I was trying to hold his weight up and mine and climb straight up. You know how Charleston is. And we were just having insane amounts of fun, and we went to the lodge after, and I remember going into the bathroom and thinking, ‘Oh, man. I don’t want to ever picture my life without this person.’ I’ve never felt like that before.”

“You’re going to make me tear up,” Troy said.

When the time came to pop the question, Troy planned to do it right with his grandmother’s ring in front of Sleeping Beauty’s castle. The ring had to be sized, so he delayed looking for the perfect moment. Finally, he knew he couldn’t wait anymore.

“Who are you texting?” he asked when he found her typing away. “She said, ‘This guy’s texting me.’ I said, ‘That’s it, done. We’re going right now.’ I took her and said, ‘You’re going with me.’ I took her, and we drove out to Red Rock under the stars. In the darkness, under the stars, I got on one knee and proposed to her. And said, ‘Will you marry me?’ And it was dark, so I couldn’t see her reaction. It was obviously yes.”

Kady’s version is that she pulled the texting prank intentionally.

“I knew he was trying to propose and wasn’t doing it, and I was getting really tired of waiting,” she said. “So I started texting a guy friend and knew that he’d see that and think, ‘I need to nail this down.’ I knew what I was doing.”

They were married in a gazebo just outside Disneyland Oct. 22, 2012.

Kady’s parents, both ministers, performed the ceremony. Troy’s mother was too ill to come, so a friend held up a phone so she could Skype in for the ceremony.

Their honeymoon took them to Disneyworld and then Georgia, where Troy grew up.

“Because I love American history and had never been, so he knew I was going to love it,” Kady said.

Right away, they were faced with challenges. Within a month and a half of the wedding, Troy’s mother died, and he took the lead on the funeral and setting up a family trust.

“It was just a huge storm, especially for a really newlywed couple,” he said.

“It’s a stressful time for anybody’s family to watch the matriarch die, so I was brand new in this family, and it was a really, really dark time,” Kady said. “It was tough, but I think it made us stronger definitely right in the beginning, which I am thankful for that. If there’s a silver lining out of it at all, it’s that.”

With Kady by his side, Troy keeps busy as the producing artistic director at the Onyx Theatre, 953 E. Sahara Ave., Suite 16B, where he just finished up the gender twister “Reservoir Dolls” and is preparing for “Heathers: The Musical” and “Titus Andronicus Jr.” He also works as a freelance director for venues such as Super Summer Theatre, where he directed “Bye Bye Birdie” last year and is preparing to take on the cheerleader musical “Bring It On” this year.

“She’s the reason, honestly, why I do so much now,” Troy said of Kady. “That’s when I decided, full time, I am a director. She encouraged that. She said pursue it, cut everything else out. I’d been gigging. I’d been doing front-of-house work. I’d been teaching, and she’s the one who said, ‘You go do what you do.’ And for the past five years, this is what I’ve done nonstop. She’s just been a rock and very encouraging. Plus, she’s awesome. She’s my best friend.”

There isn’t much Troy can think of that he doesn’t love about Kady, except maybe self-doubt.

“It’s just that for so long she’s been pushed into a corner as a stereotype of herself: ‘Oh, I’m just a dancer.’ And she’s not just a dancer, she’s very, very intelligent … She’s a great artist. Which is just a surprise that came out of nowhere, seeing some of her sketches … she just has a lot more to herself than she gives herself credit for,” he said.

That said, aside from the show he wrote for her, “Showgirls: The Musical,” Kady has had to audition for and win every role whether her husband is the director or not. And both agreed he’s tougher on her than others because he knows she can take it.

Kady said Troy has one of the biggest hearts she has ever come across.

“He would give the shirt off his back to someone who really needed it and walk through snow shirtless,” she said. “And his sense of humor. He is so stupid with his humor, and it tickles me.”

As for Troy, he loves “her heart, her standards, her morals.”

He said there are a lot of stereotypes about the women you’ll meet in Las Vegas from the hustler and the fake entrepreneur to the club girl.

“And she’s none of that. She’s completely free and just loving and giving. She has very Midwestern values, with a very East Coast sensibility. She’s just awesome all around. Plus she’s hot. That doesn’t hurt.”