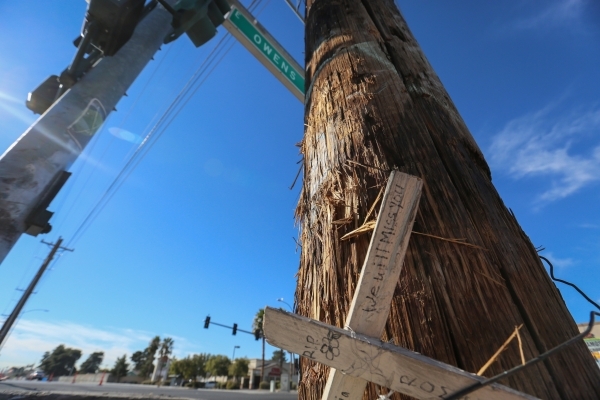 A cross memorializing a woman who died in a fatal accident involving a utility pole in March of 2015 at the intersection of East Owens Avenue and North Pecos Road marks the spot where a 20-year-old man hit the same pole Thursday night in Las Vegas on Friday, Jan. 29, 2016. The driver was pronounced dead at University Medical Center. Brett Le Blanc/Las Vegas Review-Journal Follow @bleblancphoto

The 20-year-old man who died after crashing into a light pole in the east valley overnight has been identified by the Clark County coroner’s office.

Garcia was driving a 2003 Mazda west on Owens Avenue in the right lane about 1:30 a.m. when he tried to turn onto Pecos Road, a release from Metro said.

He drove onto the triangular island and struck the base of a traffic signal post, causing the car to rotate around the post, then strike the base of a wooden power pole, the release said.

Las Vegas Fire Department personnel extricated Garcia from the vehicle and took him to University Medical Center, where he was pronounced dead, police said.

This is the 10th traffic-related fatality in Metro’s jurisdiction in 2016.

Review-Journal writer Kimberly De La Cruz contributed to this report. Contact Lawren Linehan at llinehan@reviewjournal.com or at 702-383-0381. Find her on Twitter: @lawrenlinehan