Winter will begin at 8:48 p.m. Monday with the shortest daylight hours of the year.

That means because of the sun’s angle when is shines through clouds high over the horizon this time of year, it will cast colorful sunsets over Red Rock Canyon and elsewhere around Southern Nevada.

“More than anything here in Las Vegas, we find ourselves south of the storm track. So when we see high clouds come over with the combination of the lower sun angle” that’s when spectacular sunsets occur, said Chris Outler, a National Weather Service meteorologist in Las Vegas.

He said the same holds true for eye-catching sunrises over places such as Sunrise Mountain on the eastern rim of the Las Vegas Valley.

Although similar conditions are not uncommon in other parts of the country throughout the year, “we can typically see them a little better in the Southwest this time year,” Outler said.

The winter solstice on Monday will be the darkest day of the year when the sun hits its most southern point in the sky about noon.

The sun will rise Monday at 6:48 a.m. and set at 4:30 p.m. in Las Vegas, according to the U.S. Naval Observatory, which provides astronomical data for the weather service.

The forecast calls for a high of 55 degrees and a low of 38 degrees, the National Weather Service said. Winds are not expected to remain calm, and the valley can expect to see “sporadic bouts of high clouds,” meteorologist Caleb Steele said.

No precipitation is expected, but a system moving in on Friday brings an increased chance of rain and winds. Mount Charleston may also see snow over the weekend but it is unlikely, according to the National Weather Service.

As the first day of winter approaches, temperatures are expected to fall back toward average, following a season of “plenty of anomalous weather,” Steele said.

Winter ends at 9:31 p.m. March 19 during the vernal equinox when day and night are each about 12 hours long.

In the Northern Hemisphere actual time of day and night occurs a few days before the vernal equinox as the northward-bound sun crosses the celestial equator, after rising exactly due east and before setting exactly due west, according to The Old Farmer’s Almanac, a seasonal resource since 1792. 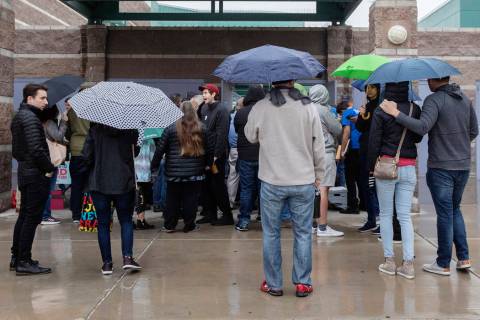