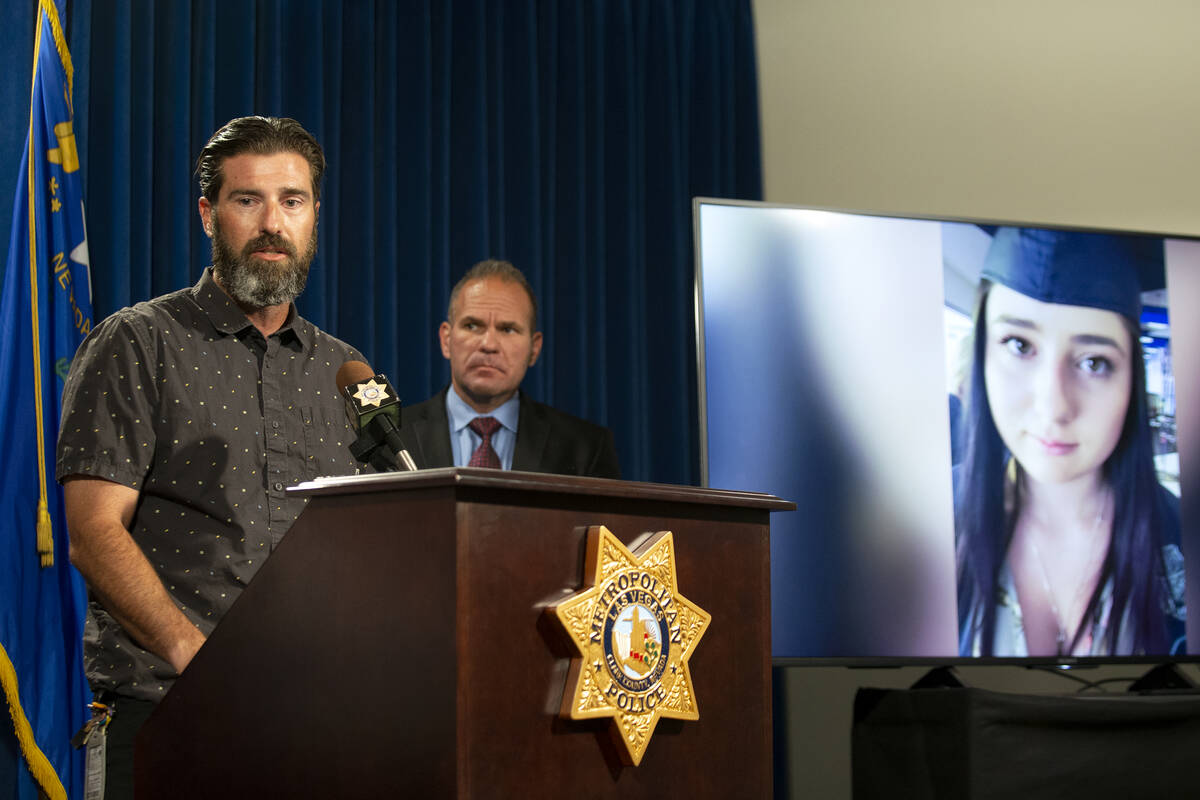 Lee Gugino, left, speaks during a press conference about his daughter Mia Gugino's fentanyl overdose death at the Las Vegas Metropolitan Police Department headquarters on Thursday, Sept. 16, 2021, in Las Vegas. Behind is Capt. John Pelletier and at right is a photograph of Mia Gugino, 17. (Ellen Schmidt/Las Vegas Review-Journal) @ellenschmidttt 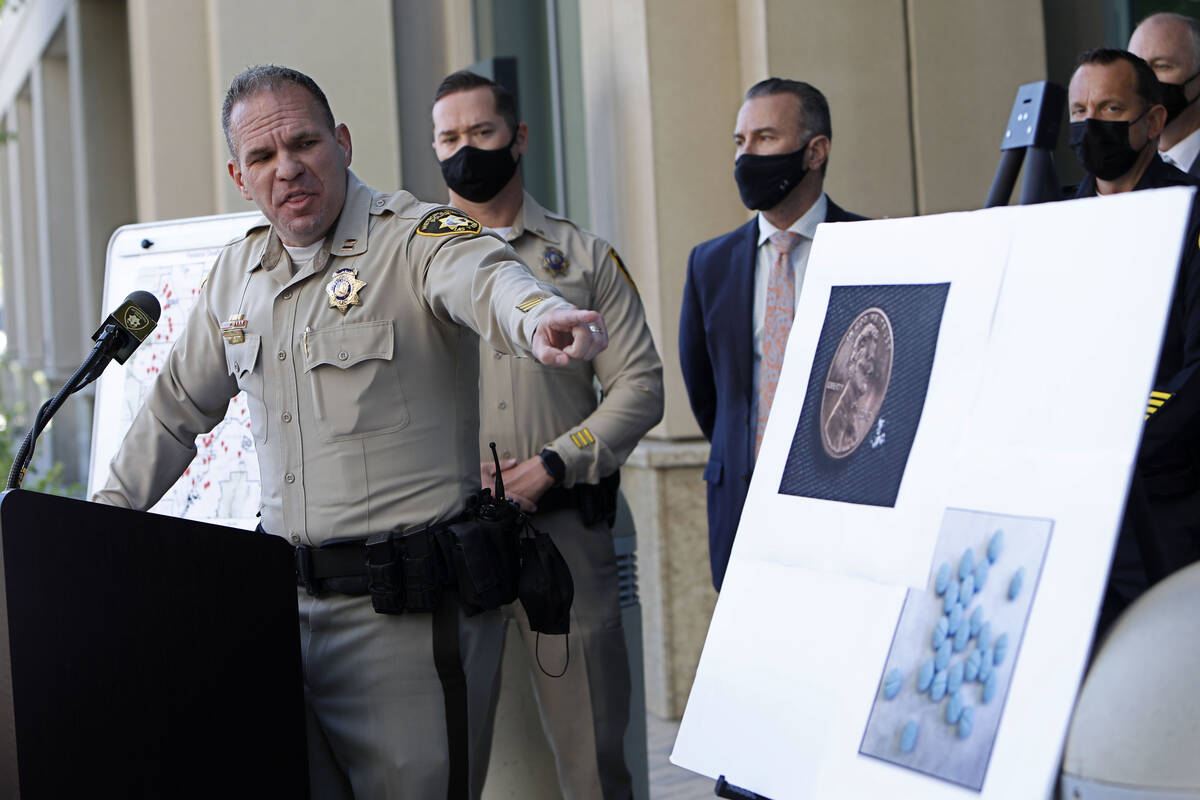 The Las Vegas father says he has cried and wondered, over and over, what he could have done to avert tragedy at his home.

One day in February, his daughter, Mia Gugino, 17, was playing with her little sister and cooking dinner. The next morning, she was dead, one of 174 people killed by a fentanyl overdose in the first eight months of this year, health officials and police said.

“This drug, fentanyl, it doesn’t give you any chance,” Lee Gugino said, when Las Vegas police announced the arrest of the man they allege gave her the drug.

“She was fearless and she made me so much better than I actually am.”

Drug overdose deaths among Nevadans under 25 nearly tripled from 2019 to 2020, while fatalities among the Hispanic community more than doubled, according to a recently released report from the state’s Division of Public Health and Behavioral Health.

Last year, 106 Nevadans younger than 25 died of drug overdoses, compared with 38 in 2019, the report made public earlier this month stated. For Hispanics Nevadans death rose to 145 in 2020 from 66 the year prior.

And the numbers continue to climb.

Fentanyl, the synthetic opioid described as being up to 100 times stronger than morphine, drives a dramatic increase of overdose deaths, particularly in Clark County. The drug killed 255 Nevadans last year, about a 227 percent surge from the 78 deaths in 2019, the state’s data shows.

“We said fentanyl was coming,” Metropolitan Police Department Capt. John Pelletier said in April. “Fentanyl is here,” he added, noting that 2021 was not looking “good.”

The synthetic opioid killed 193 Clark County residents last year compared to 72 in 2019, according to data compiled by the Southern Nevada Health District.

This year, in August alone, 42 fentanyl-related deaths were reported, including five people who died in a 24-hour period that month, Metro said Tuesday.

Drug overdoses killed 788 Nevadans in 2020, a 55 percent hike from 2019, according to the public health division report.

Metro’s data showed that most of the deaths took place in Clark County, where overdoses left 760 people dead last year, compared to 591 in 2019.

To combat the issue, Metro has established an Overdose Response Team, which comprises local officers, federal agents analysts and the Clark County coroner’s office to respond to fatal and nonfatal overdose calls in an effort to gather evidence in pursuit of drug peddlers. The agencies have a data-sharing system with the Southern Nevada Health District, which then pushes information out to officials and the public.

Authorities have said that fentanyl is increasingly being mixed into drugs without the knowledge of buyers who believe they are purchasing legitimate, prescription-strength pills. Increasingly, Metro is pursuing murder charges for sellers whose products kill. This year, police arrested at least two people on suspicion of murder in overdose deaths.

One is Joshua Roberts, 22, who was jailed in September on counts of first and second degree murder, in addition to a drug trafficking count, in connection with Gugino’s death. The college student-athlete was killed by an MDMA pill that had been laced with fentanyl, said Las Vegas police, who alleged Roberts gave the girl the pill.

Roberts, since released on house arrest with electronic monitoring, is awaiting a preliminary hearing scheduled for Nov. 4, according to Las Vegas Justice Court records.

In September, Metro arrested Orianna Cervantes on a second-degree murder charge in connection with the overdose death of a man in February. Cervantes was freed on high-level monitoring house arrest, and is due in court next month.

“If you sell a drug and it kills someone, we will be relentless,” Pelletier said when he announced Roberts’ arrest. “If that means charge you for murder, so be it.”

Thirteen Clark County residents under the age of 18 died from drug overdoses in 2020, according to the Clark County coroner’s office. Gugino was one of five minors killed by drugs this year, four of whom had died from a fentanyl intoxication, Metro said last month.

All Nevada child deaths in 2020 occurred in Clark County, according to the coroner’s office and the Nevada report.

While fentanyl-related fatalities increased more than two-fold in Nevada from 2019 to 2020, heroin, also an opioid, was 20 percent less lethal, the Nevada report determined.

Other findings from the report:

Half of the victims had mental health issues, while three-quarters had a history of drug abuse, and about 75 percent of the overdoses took place in a “home setting.”

One in nine who died had received previous rehabilitation treatment, and the same number of people had a previous drug overdose history.

Researchers highlighted Naloxone, an opioid reversal antidote, as a possible life saver. The canister, packaged as brand name “Narcan,” is available for free at the Health District, where classes on how to use it also are available.

Health officials have also been pleading with users of opioids — legal and illicit — and bystanders to call 911 if an overdose occurs. In 2015, Nevada lawmakers passed the Good Samaritan Drug Overdose Act, which shields bystanders from being charged with low-level drug crimes after emergency crews arrive. 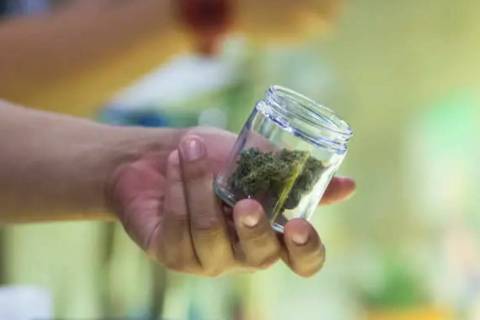 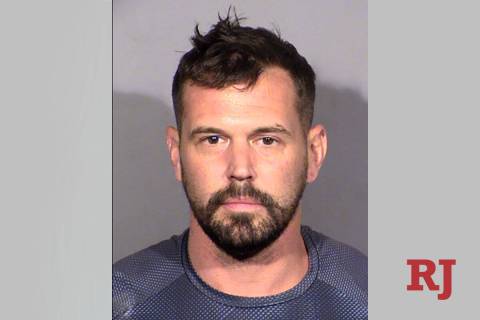