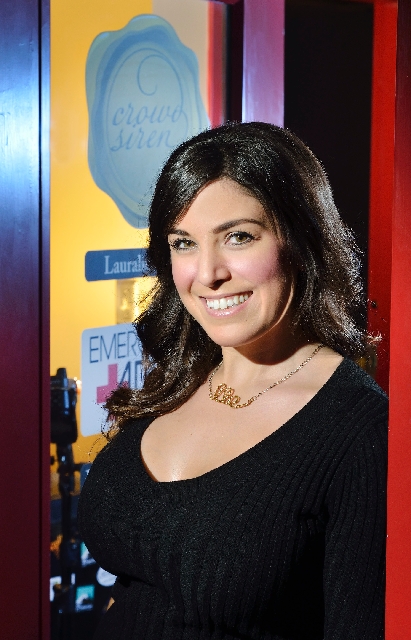 For Lauralie Lee Ezra, Las Vegas is home. She was born and raised in Sin City and attended college in Reno before returning. But just after graduation she wasn’t ready to begin her career here.

So with two suitcases, Ezra, 29, was off to New York City and a short-lived career as director of projects and programs for the public advocate’s office.

“I lived in a youth hostel the first night,” Ezra said. “I thought, ‘What am I doing here?’ Then my grandmother’s sister called me and said, ‘I live on Long Island.’ So the … rescue squad came and picked me up.”

But it was always Las Vegas where Ezra planned to live and start her own business.

That business is Crowd Siren Consulting, a public relations, branding and online media services firm tucked away in a second- floor office at Emergency Arts on East Fremont Street in downtown Las Vegas.

Her company’s niche is building and maintaining companies’ brands online. Some companies might need an audit to determine their brand’s online presence; startups might need everything from a logo, to a website or Facebook advertising campaign.

Ezra is working with Daniella Capitano, owner of American Vagabond in Las Vegas.

“She’s new to town,” Ezra said. “She literally found me through the Emergency Arts website, sent me an email and asked me for help in getting set up.”

In this case, Capitano needed everything from a company logo to website to online presence. Ezra said since August she’s designed a logo, business cards, website and gotten American Vagabond a photo shoot.

After about a year of hard work, Crowd Siren is profitable and even has two part-time employees.

Question: How did you get involved designing social media campaigns?

Answer: I started by doing some consulting, but quickly realized there was a lot here. There were two problems that people face with social media that I help to fix. One is I don’t understand or know how to use social media and in that case I can teach them. The second problem, which I face a lot, is I know how to implement a social media campaign for me of my company but I don’t have the time to do it and then monitor it.

Answer: I’m usually asked to manage it for them. That’s what I do most of all, help companies maintain their social media campaigns. We build it out, especially for startups. Let’s build you a brand, get you a logo if you need one. I’ll build it up and then transition it back (to the company) after we’ve built momentum. That’s what I did with First Friday.

Question: Do clients still believe there is only one way to implement a social media plan?

Answer: That’s why I say it’s about branding, too. We are going to brand — relevancy, content and spaces. I met with a spa recently that on (its) Facebook page (was) putting up pictures of snowmen. I told them this is not relevant and it doesn’t build your brand. This is fun content but it doesn’t translate into this space. Let’s put up a funny picture of a cat getting a massage, now that’s funny and relevant.

Question: What attracted you to downtown Las Vegas in 2010?

Answer: I would have never of thought I would be here. My dad worked on Fremont Street when there was no umbrella. But (boyfriend) Todd (Levy) went to business school in Denver and when he moved back (to town) he was looking for co-working spaces. We saw an article about Emergency Arts. So I email Jennifer (Cornthwaite) and about a week later there was a group outing for Jewish Young Professionals down here. We came and walked through and fell in love.

Question: Did Crowd Siren bring you to Emergency Arts?

Answer: We were basically moving in for Todd’s startup because Crowd Siren was just a baby. I was still doing consulting here and there. I didn’t even have a name for my business. I just wanted to be here. I don’t know of any other place in Las Vegas like this … so we decided to move in.

Question: How hard was it to start you own business in downtown Las Vegas?

Answer: What I like to tell people is that I don’t think my business would be as successful if I hadn’t been here. I was here and people started telling others that here’s (Lauralie) she’s that woman doing social media for local businesses. I met people at The Beat (Coffeehouse), even former Mayor Oscar Goodman hung out at The Beat. Michael Cornthwaite introduced me to the campaign. And so it was just really about being here that I met people and built my business. That’s how my business grew. I went to the (Vegas) Tech Jelly when they started and I got some business there. I also did Startup Weekend.

Question: What is (Vegas) Tech Jelly?

Answer: It is casual co-working for people who work in the tech space. So Todd is a business development guy and say he needs someone to write code and do tech. So he comes to this event, meets and talks to people and partnerships form. A lot of partnerships have formed and companies have started because of these events. They’ll have information sessions. They’ve brought in investors to teach how to speak and pitch ideas to investors. They’ll give you a lot of information about how to work in the tech space.

Answer: How did you fund Crowd Siren?

Question: Because my business is service-oriented I didn’t need a lot of capital. I started out by asking friends if they needed help with social media I can do a consultation with you for $50. The first consultation I had was a friend, who said, “Let’s go over my social media plan.” So we sat down at The Beat and we had a session that lasted an hour. She handed me a check for $65 and I went and bought business cards from FedEx. Then with my business cards, I went out and started to try and sell myself from there. My cards were white with just my name and phone number. I had no money because I had been writing a blog. So then … every dollar I made went back into the business to grow the business. I used a free launch page at the time until I had money to get a website. I traded — I did work with someone who did websites so I said you do beautiful websites and I do social media so lets do a trade. That’s how I built my business.

Question: Is there a lesson you learned while starting your own business?

Answer: Don’t wait. In between my blog coming to an end … and starting my business, I thought I had to go to work. So I applied at Nordstrom’s and worked there for a total of four days. I came home one day and looked at Todd and said I can’t do this. This is not who I am. He said then you have to start working on this idea you have. Start today. So I said OK. The first thing I did was talk to about 20 business people about my idea.

Question: Did you ever question your decision?

Answer: I think it wasn’t so much why did I start my own business, but how am I going to grow. How do I get a client? How do I make money? How do I invoice people? I didn’t know … it was figure it out as you go along. I asked a lot of smart people a lot of questions. When I needed an invoice system, I asked a friend and they gave me a suggestion. I use their invoice system to this day. I never thought, why did I do this? It was how do I make this into something that is profitable?

Question: Are you profitable today?

Answer: Yes I am. Officially, Crowd Siren has been around since mid 2011. A lot of it in the beginning was putting it all back into the business. I would say within six to eight months I was in the black. There is some room now where there is some money. So now I have an assistant and I have an intern, which is great.

Question: Where do you see downtown Las Vegas headed?

Question: What is the answer?

Answer: I think if we want to make this a real community, we are going to have to think about what the community needs. Housing, grocery stores, parks, running trails. This is why I still live in Summerlin. … I can be down here, work here, party here and head home to suburbia where I can step outside and go for a run … there are trails and soccer fields.