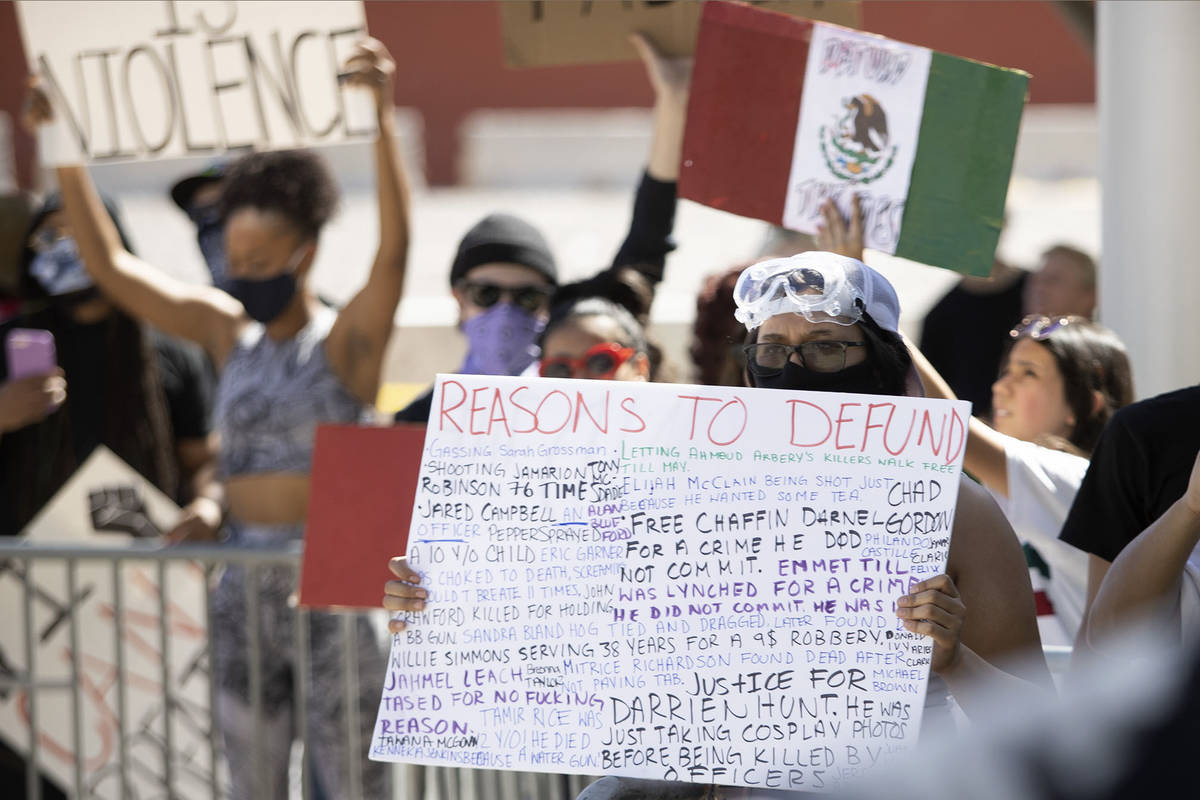 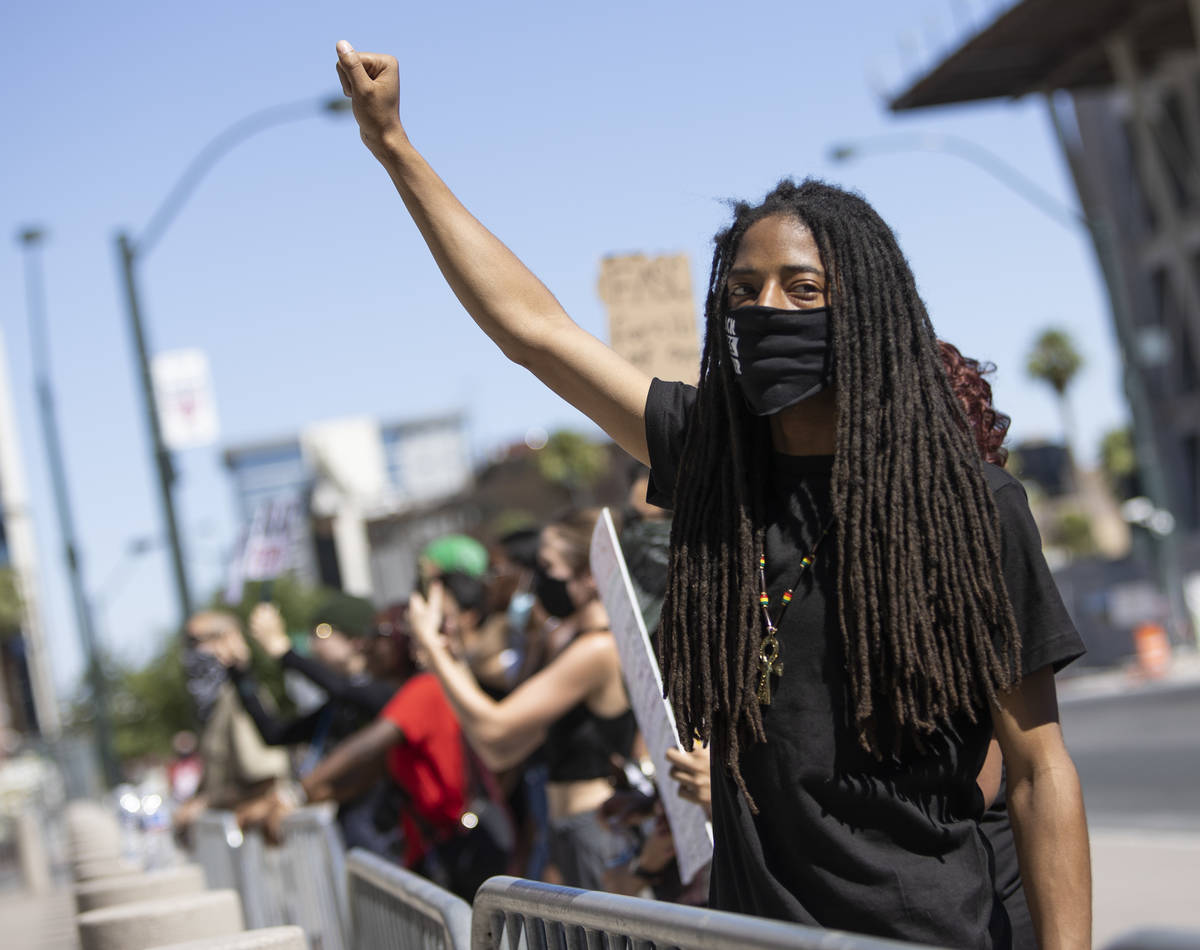 Dre Thurman holds his fist high as other protesters chant "no justice, no peace" outside Las Vegas City Hall on Wednesday, June 10, 2020 in Las Vegas. The protests' theme was defunding the police, addressing police brutality along the way. (Ellen Schmidt/Las Vegas Review-Journal) @ellenkschmidttt 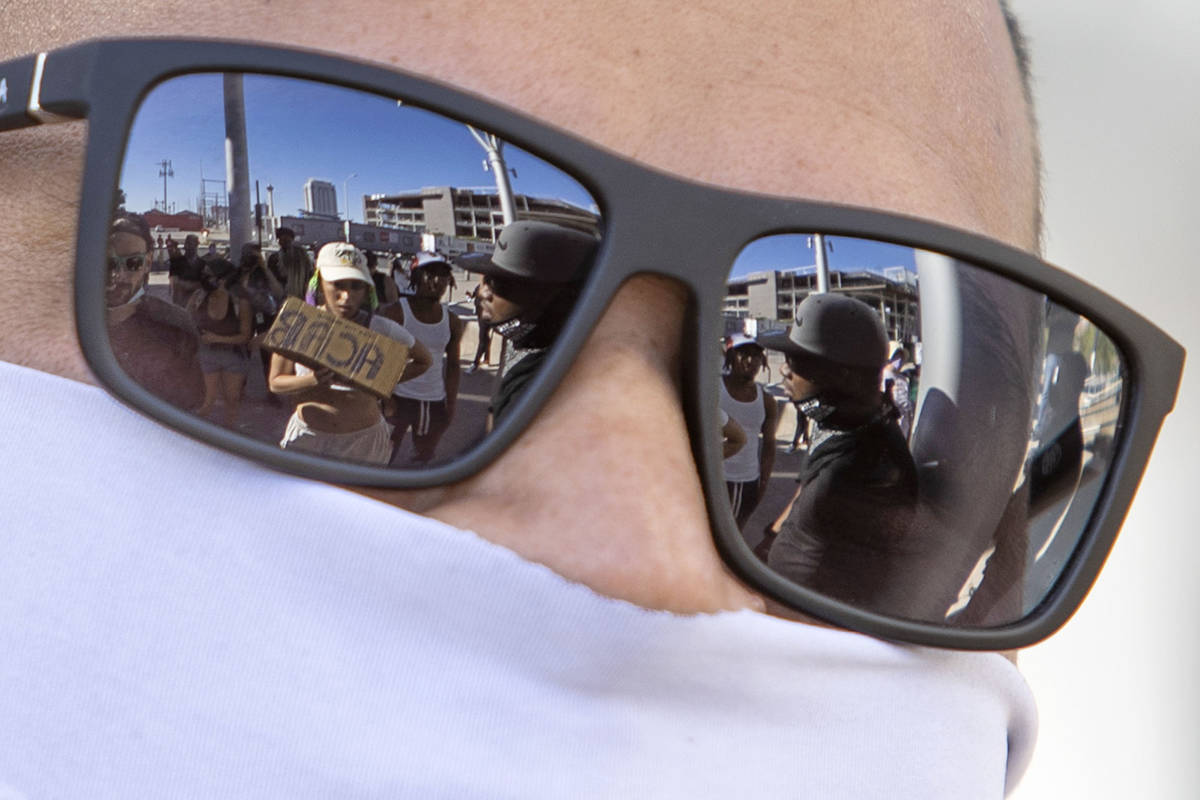 Demonstrators are reflected in the sunglasses of a Las Vegas police officer outside Las Vegas City Hall on Wednesday, June 10, 2020 in Las Vegas. The protesters were asking to speak to Mayor Goodman, who has an office in the building, to divert funds from police to other public programs. (Ellen Schmidt/Las Vegas Review-Journal) @ellenkschmidttt 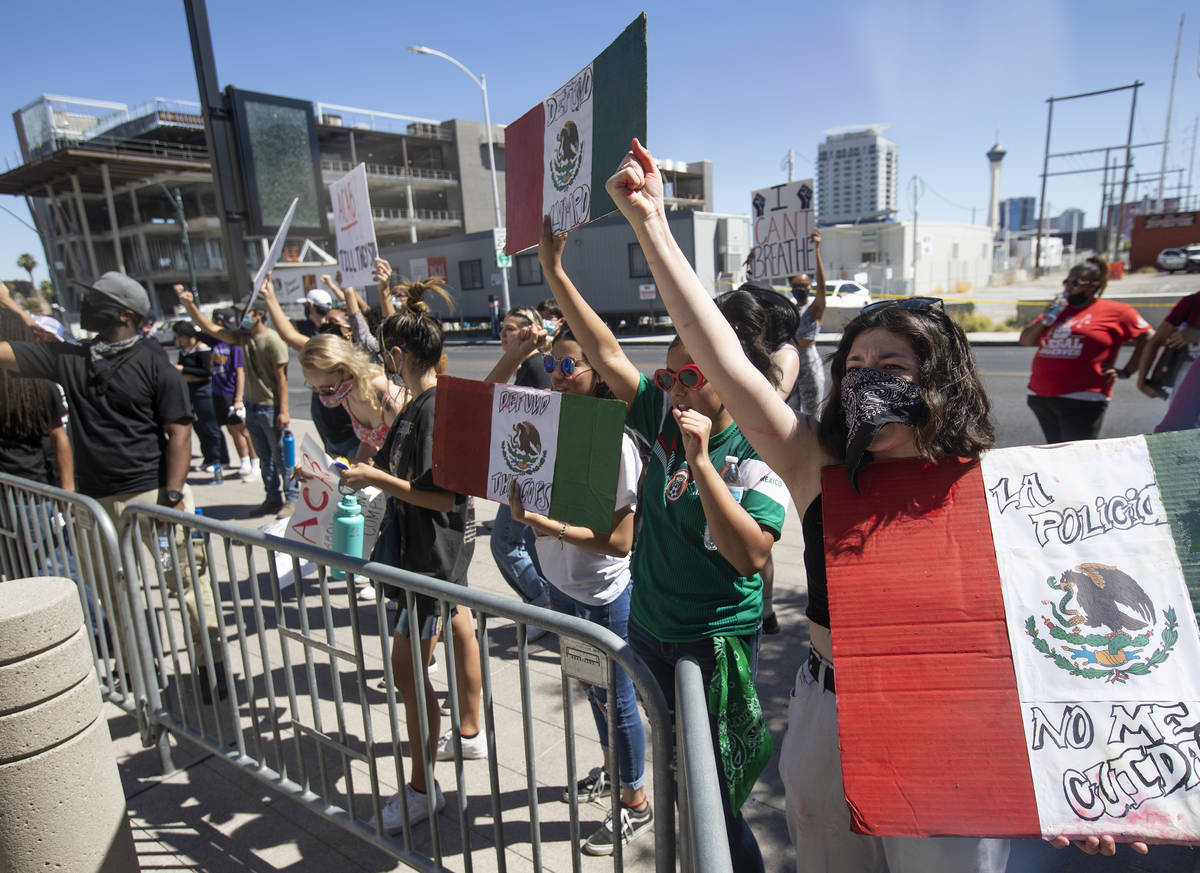 Outside Las Vegas City Hall, Leslie Fausto, right, demonstrates in an effort to defund the Metropolitan Police Department on Wednesday, June 10, 2020 in Las Vegas. "I have little sisters in middle school and their schools are severely defunded," she said. (Ellen Schmidt/Las Vegas Review-Journal) @ellenkschmidttt 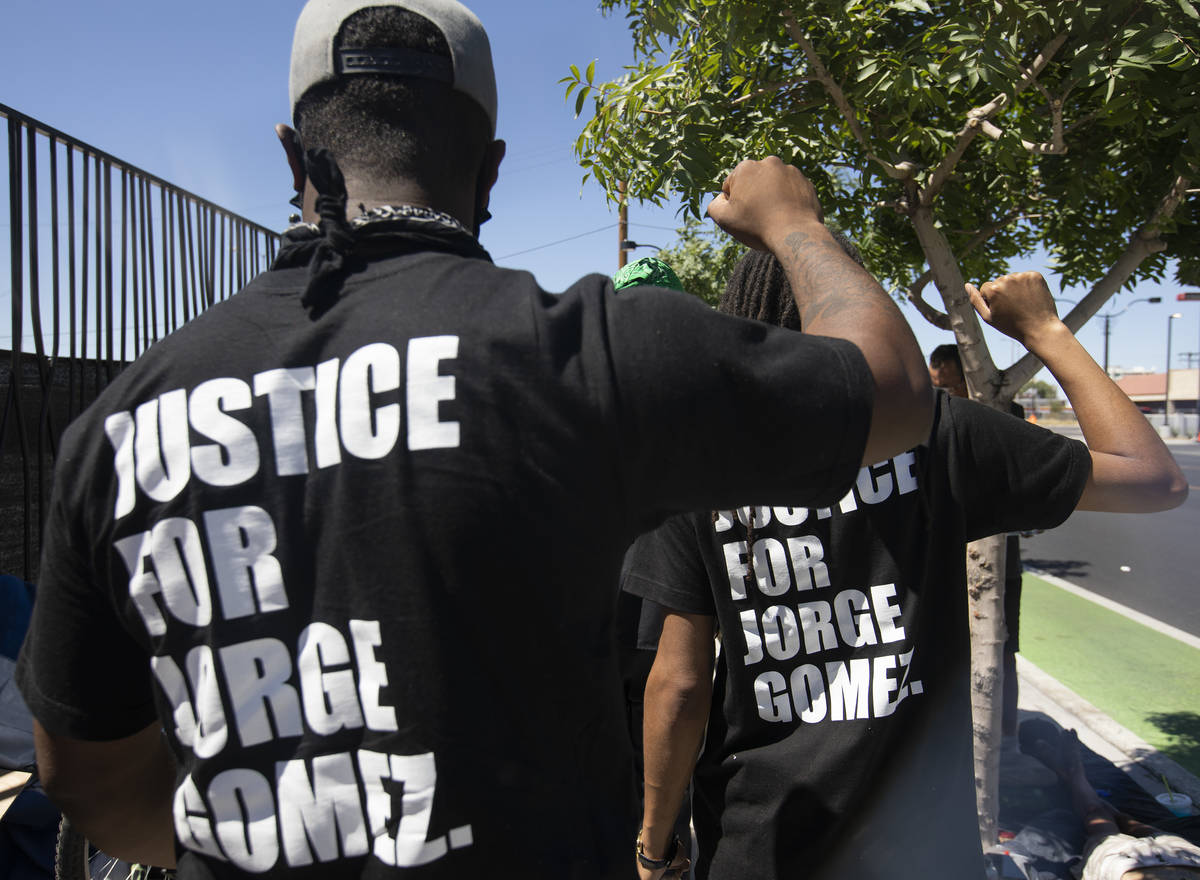 Deonte Thurman, left, and Dre Thurman, right, wear shirts saying "Justice for Jorge Gomez," as they march from The STRAT to Las Vegas City Hall demanding that the city defund the police department on Wednesday, June 10, 2020 in Las Vegas. The shirts refer to Jorge Gomez, a person who attended a recent protest and was shot and killed by Las Vegas police when they said he drew his weapon. (Ellen Schmidt/Las Vegas Review-Journal) @ellenkschmidttt 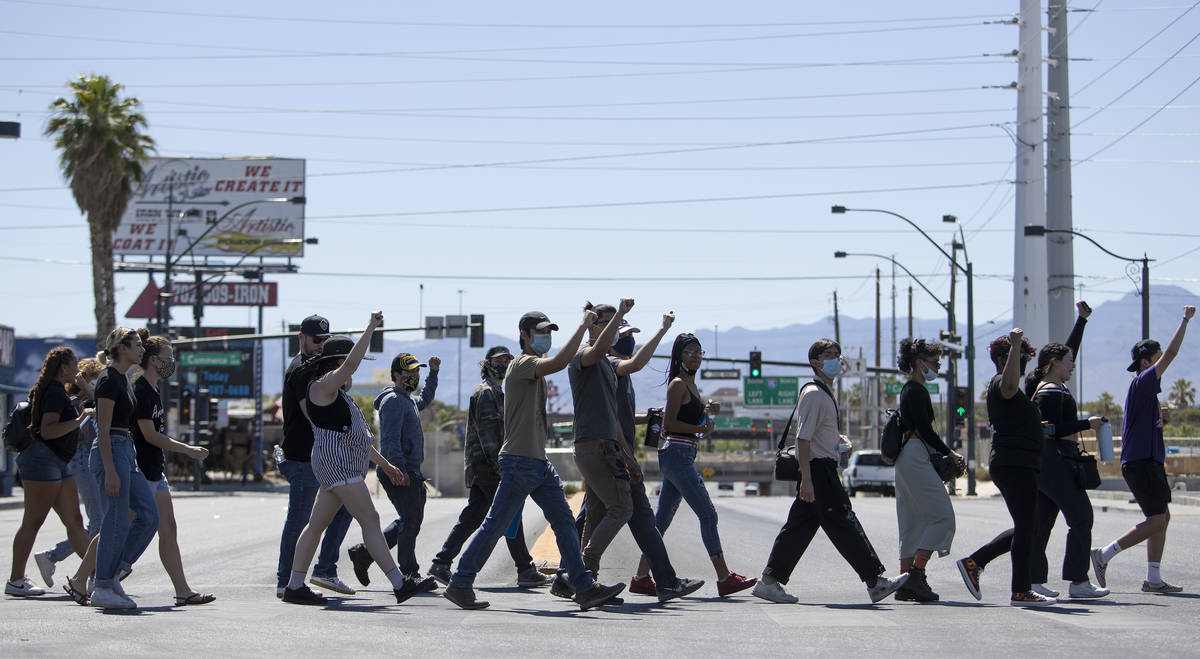 Demonstrators cross Charleston Boulevard on their way to Las Vegas City Hall in an effort to defund the Metropolitan Police Department on Wednesday, June 10, 2020 in Las Vegas. Organizers called on demonstrators to hold local politicians accountable, asking them to divert funds from police to other public programs. (Ellen Schmidt/Las Vegas Review-Journal) @ellenkschmidttt 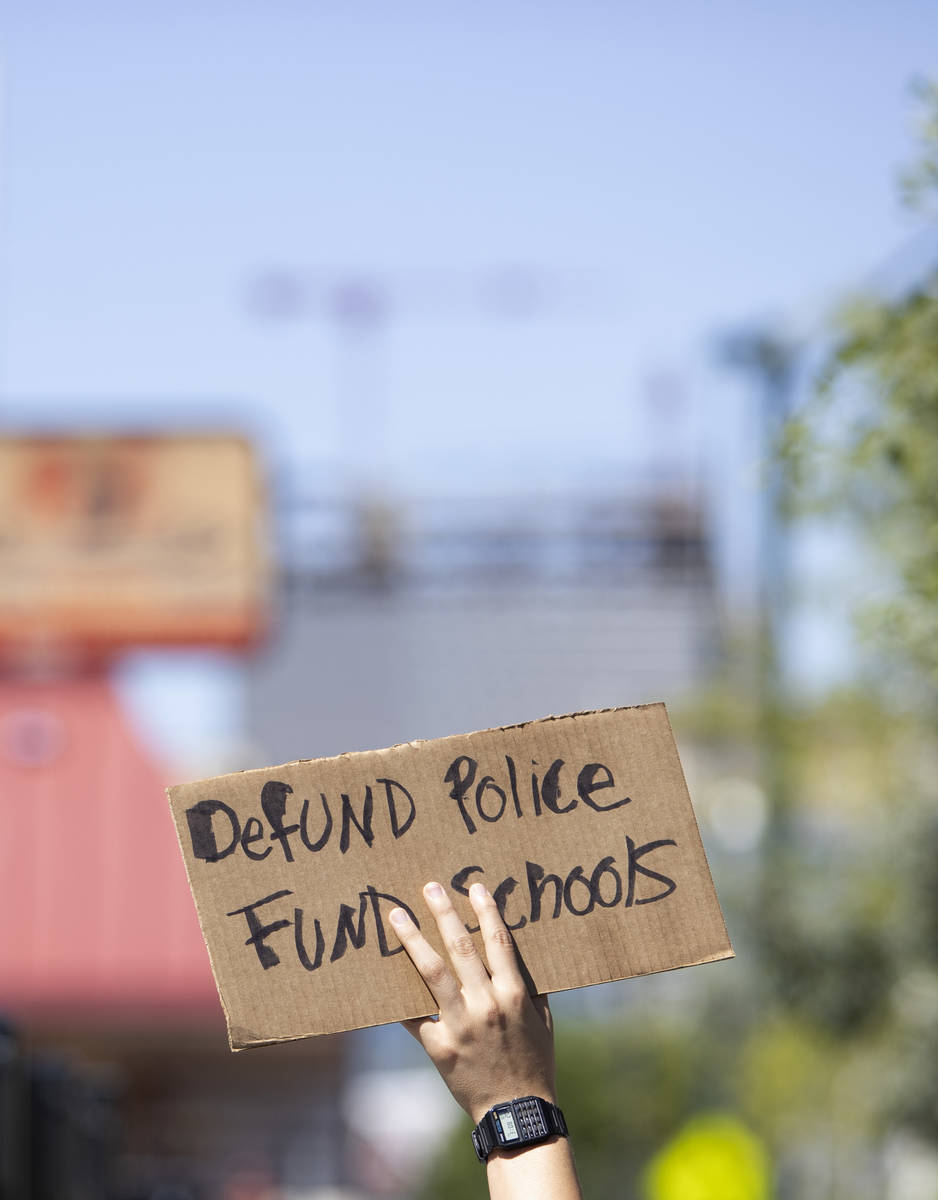 One marcher carries a sign calling for local politicians to defund police and fun schools on Wednesday, June 10, 2020 in Las Vegas. A group of about 40 protesters marched from The STRAT to Las Vegas City Hall. (Ellen Schmidt/Las Vegas Review-Journal) @ellenkschmidttt 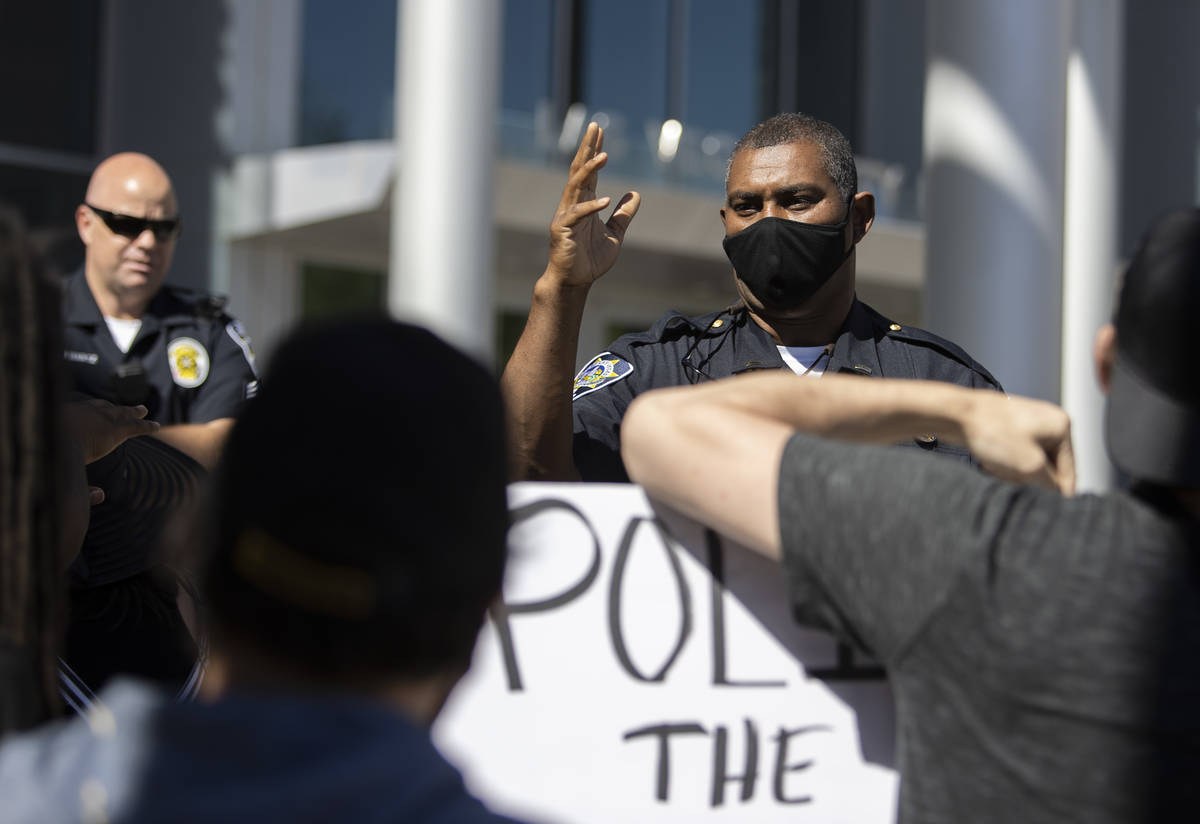 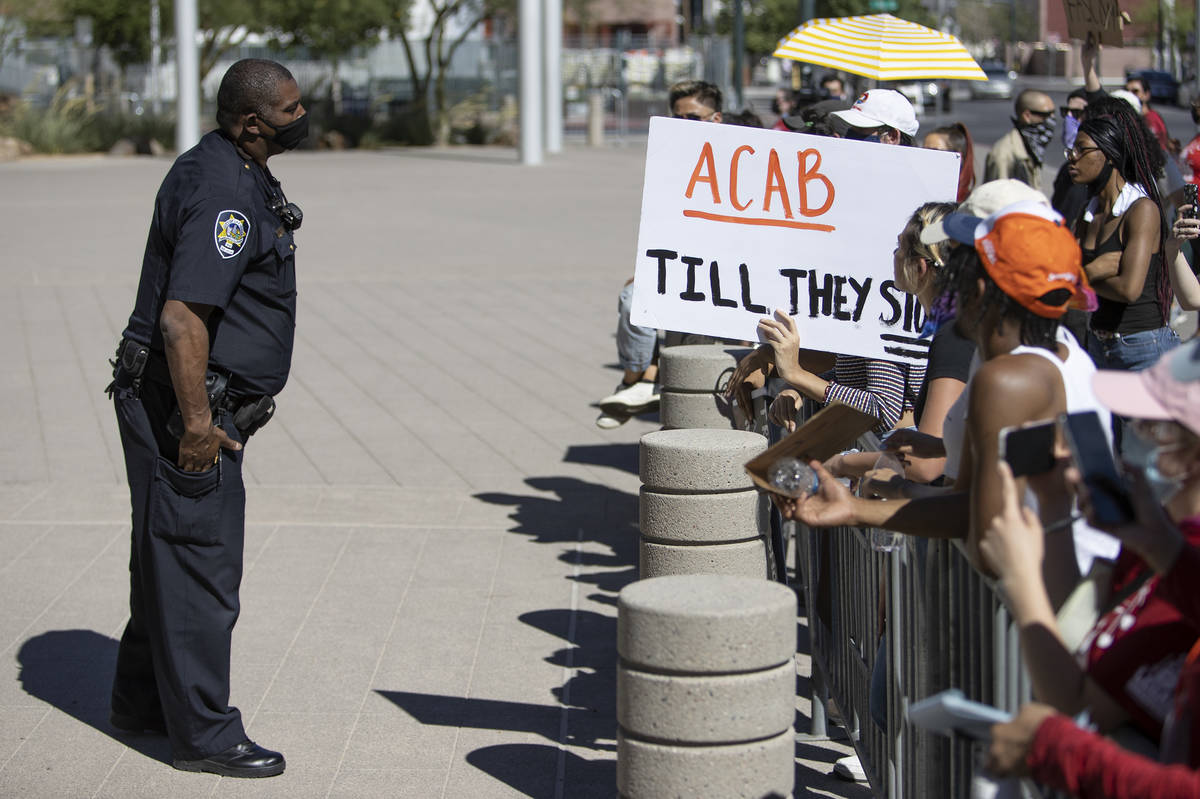 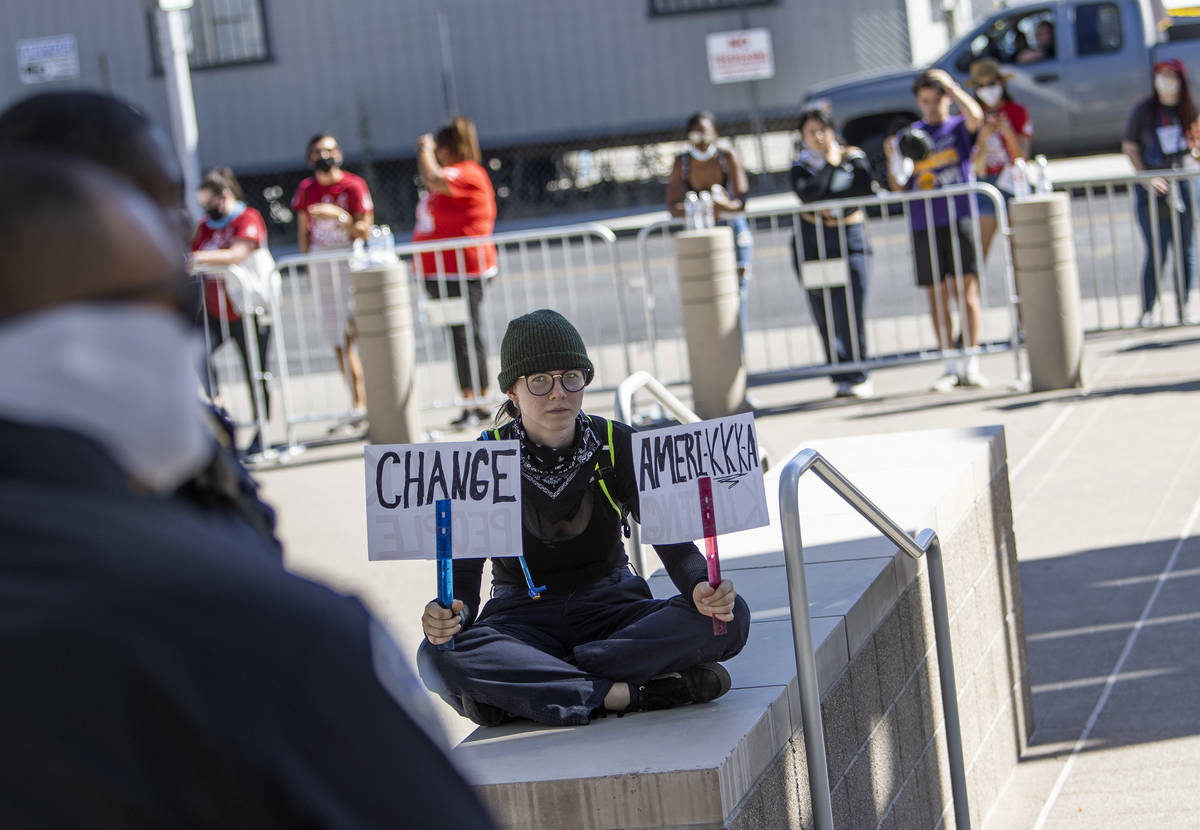 Erica Sommerfeld of Las Vegas sits in an area that police blocked off in anticipation of protesters outside Las Vegas City Hall on Wednesday, June 10, 2020 in Las Vegas. "I want to continue to make noise," said Sommerfeld, who has attended multiple recent protests. (Ellen Schmidt/Las Vegas Review-Journal) @ellenkschmidttt 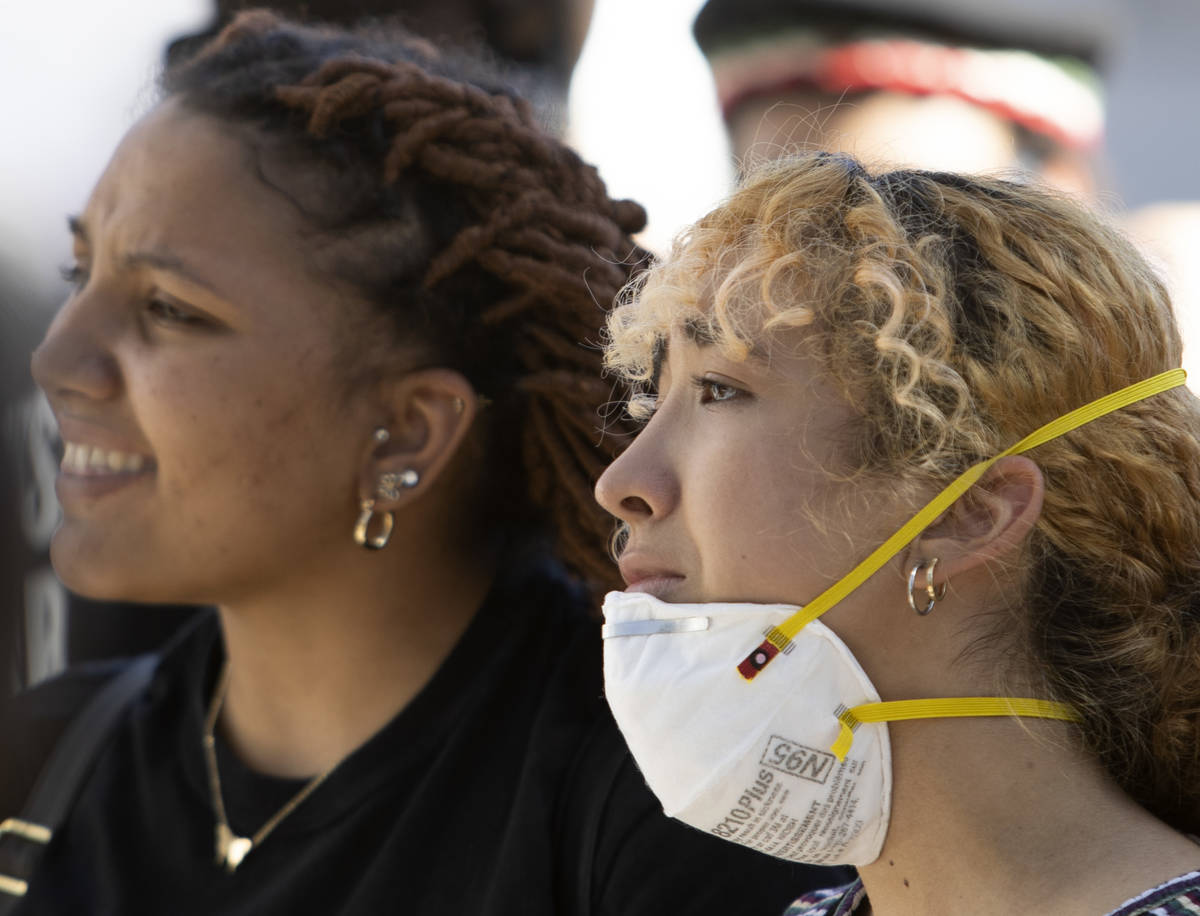 Jayla Scott, left, and Fernanda Rivera, right, get emotional while protesting in an effort to defund the police department outside Las Vegas City Hall on Wednesday, June 10, 2020 in Las Vegas. The pair, and the other 30 to 40 protesters, were asked to disperse, but not arrested after the 15 minutes that police gave them to leave. (Ellen Schmidt/Las Vegas Review-Journal) @ellenkschmidttt 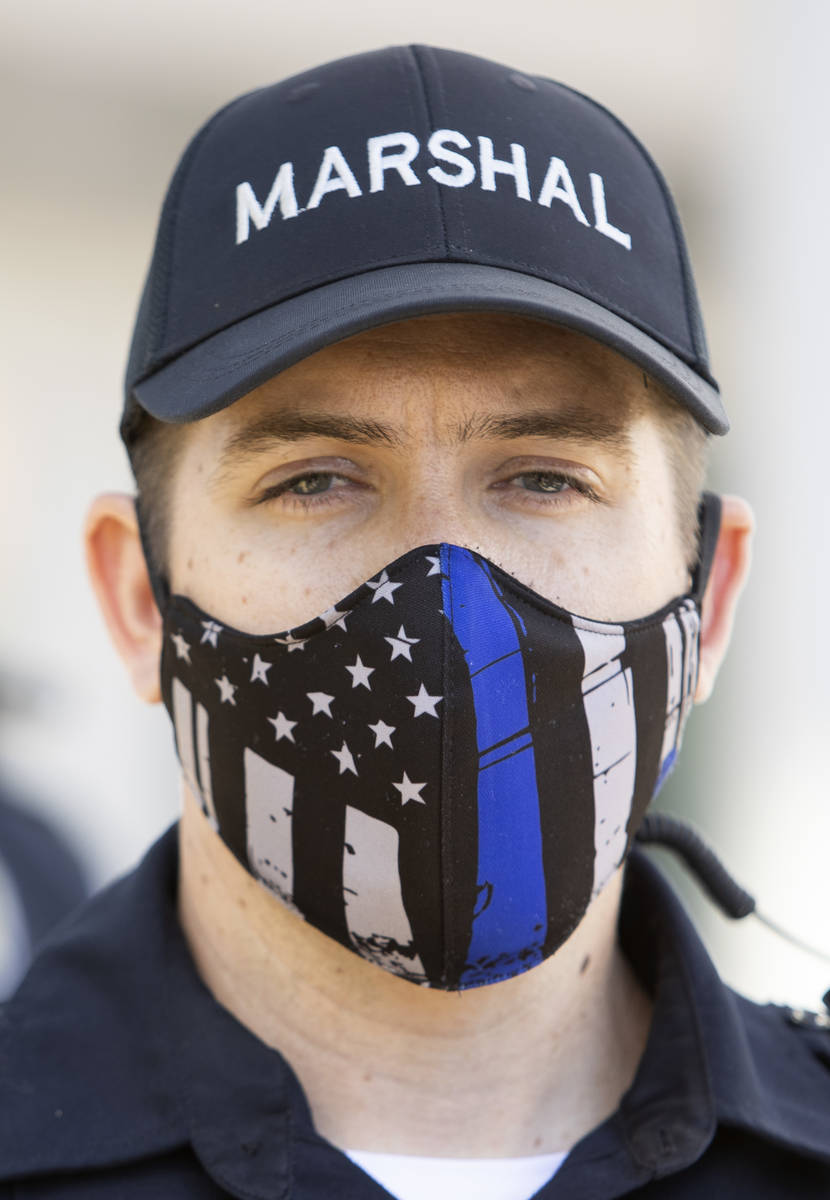 One Las Vegas police officer wears a "thin blue line" mask while standing between protesters and Las Vegas City Hall on Wednesday, June 10, 2020 in Las Vegas. The protesters were asking to speak to Mayor Goodman, who has an office in the building, to divert funds from police to other public programs. (Ellen Schmidt/Las Vegas Review-Journal) @ellenkschmidttt

Protesters marched in downtown Las Vegas on Wednesday as part of a growing national movement seeking to defund police departments.

The protest began about 2 p.m. as the crowd walked from The Strat to Las Vegas City Hall. A flyer posted to social media advertising the demonstration called into question the Metropolitan Police Department’s budget.

Porfirio Flores and Alex Hatwood, who helped organize the march, said they wanted to focus on defunding the police department to bring attention to policing issues in Las Vegas.

The recent protests over the death of George Floyd in Minneapolis police custody empowered the two to organize Wednesday’s demonstration.

“This just gave us the chance to really step up,” Hatwood said.

The two said funding that would otherwise be spent on police should be diverted to other social services in the valley, such as education.

During the march, one protester held up a cardboard sign reading, “Defund Police Fund Schools.” A woman sitting outside an Arts District business held her fist in the air and shouted support for teachers when she saw the sign.

Jayla Scott said she’s been involved in activism since she started a Black Student Union at her high school. But recent protests in the valley marked the first time she’s attended demonstrations.

The 19-year-old, who said she supports the movement to drastically change policing and funding for departments, walked with a sign reading “Say Her Name” on one side and “Try to Show Me a Good Cop I’ll Show You an Accomplice,” on the other.

“I think we’re seeing a shift in our society,” she said. “What we’re asking for could actually be achieved.”

The protesters had gathered at City Hall and were met with metal barricades blocking the front steps. The group of about 40 gathered on the steps anyway.

By about 4:15, officers gave a dispersal order, with one telling the protesters they were “disturbing the peace.”

Instead of leaving, the group stood face to face with officers standing in a line, wearing face masks. One officer wore a mask depicting the “Thin Blue Line” flag, meant to represent police.

Dre Therman stood on a raised concrete platform and looked down on the officers and talking to them. The 23-year-old later said he was asking why the officers were “working for a system that don’t care about you.”

The officers eventually went inside the building, and most of the group left City Hall by 5 p.m. After the officers had left, Therman said he was disappointed that Mayor Carolyn Goodman didn’t speak with the protesters.

During the protest, the group chanted, “Mayor Goodman, do your job.”

“If something’s going on that’s very dramatic in the world and you don’t say nothing, that shows a lot,” said Therman, who wore a black shirt bearing the words “Justice for Jorge Gomez.”

In Las Vegas, protests have largely been focused on racism and police brutality. On Tuesday night, more than 50 people marched in downtown as part of a vigil to honor Jorge Gomez, who was shot and killed by Metro officers during a Black Lives Matter protest last week.

According to records posted to Metro’s website, the department’s final budget for fiscal year 2020 to 2021 was set to be approved by the Las Vegas City Council and the Clark County Commission, then sent to the state Department of Taxation before June 1.

Calls for defunding police departments have emerged during nationwide protests over Floyd’s death.

The Associated Press reported this week that supporters of the movement say it’s not about eliminating police departments or taking all money from agencies. Rather they want the nation to “spend more on what communities across the U.S. need, like housing and education.”

A majority of the members of the Minneapolis City Council said Sunday they support disbanding the city’s police department.