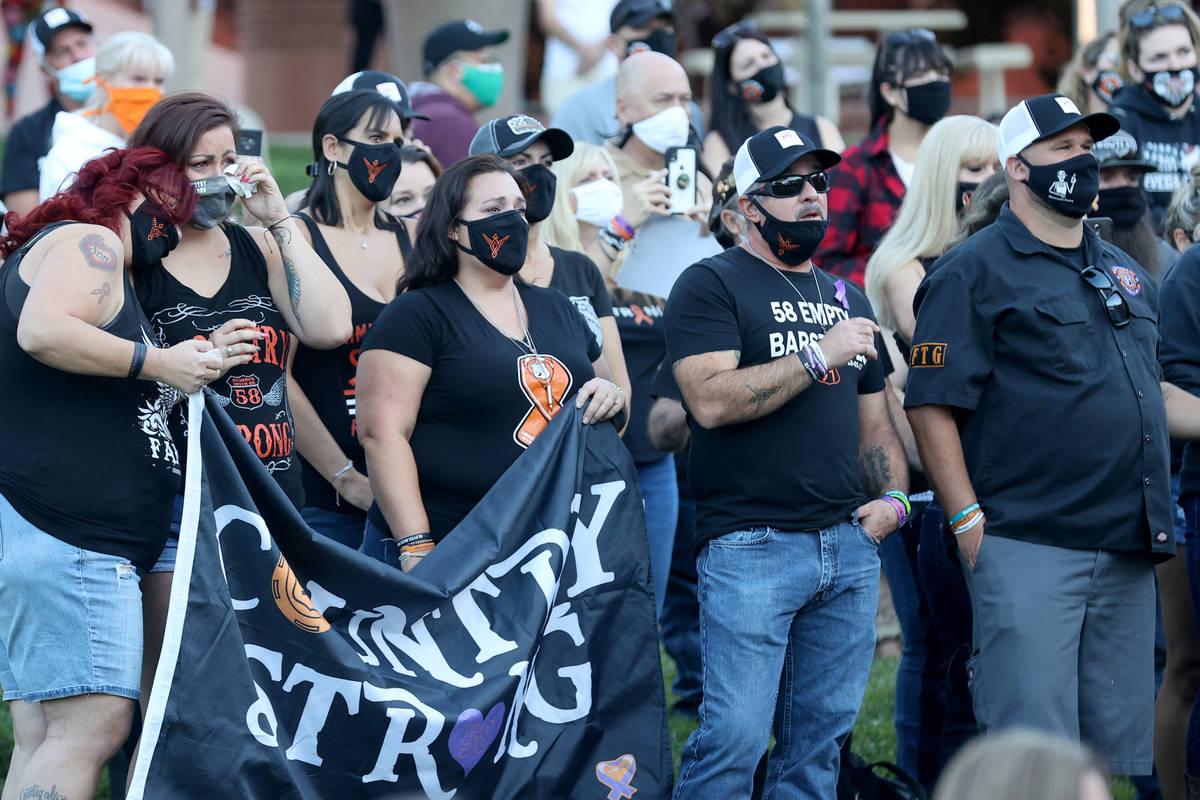 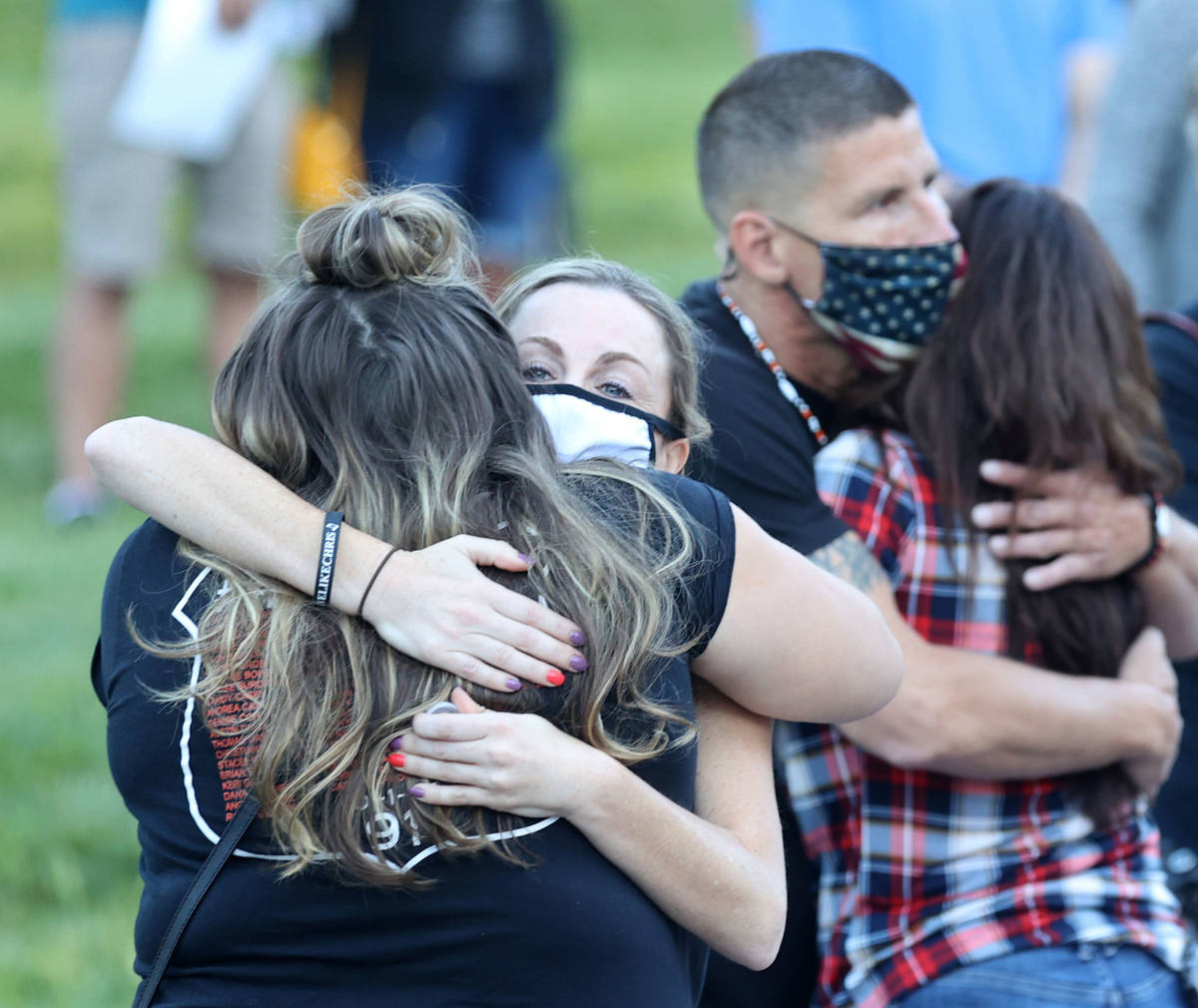 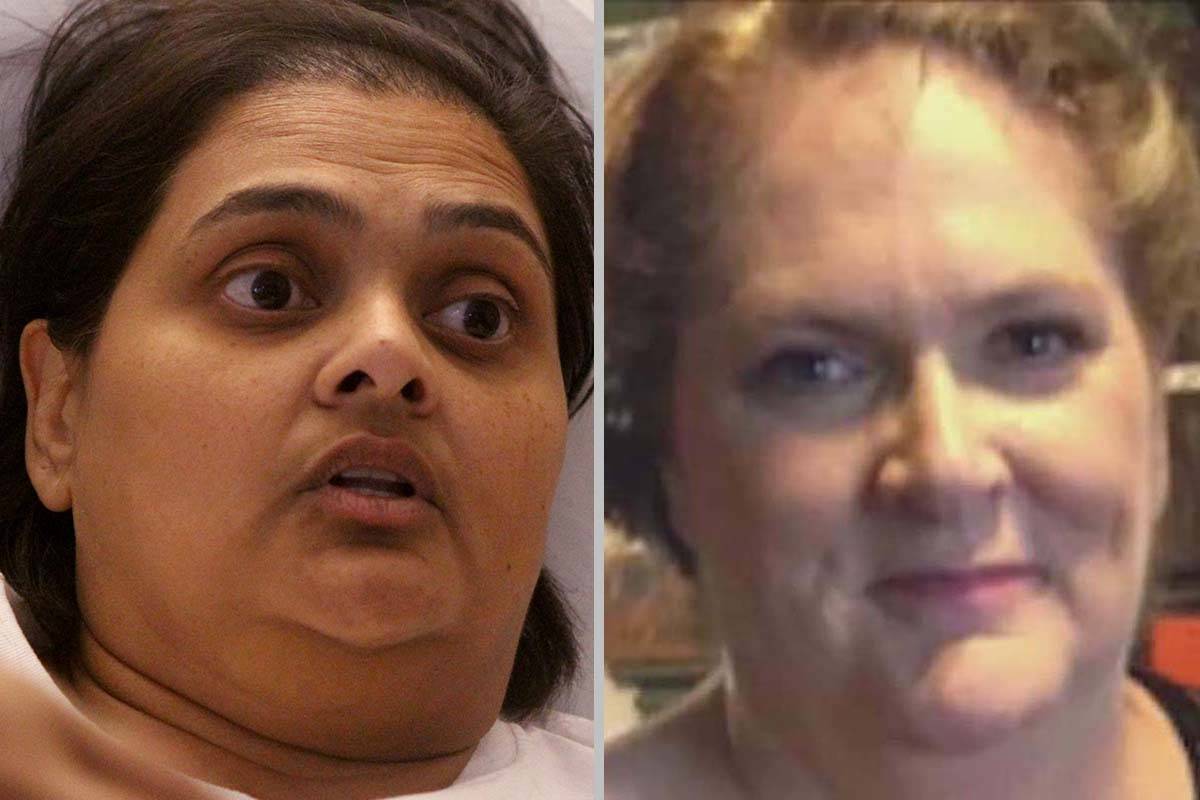 Samanta Arjune, left, and Kimberly Gervais were wounded in the mass shooting on the Las Vegas Strip on Oct. 17, 2017. Both died from injuries related to the shooting - Gervais in November 2019 and Arjune in May. (Las Vegas Review-Journal/Courtesy) 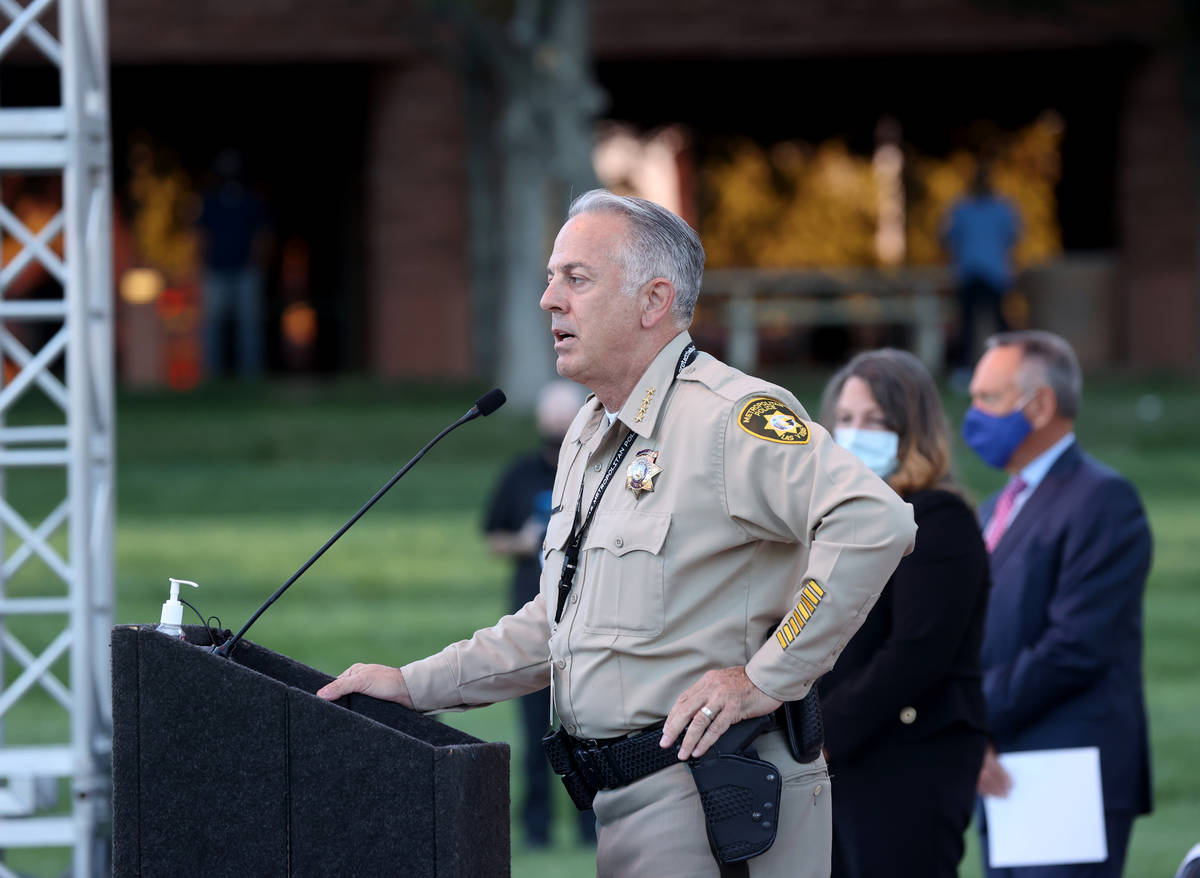 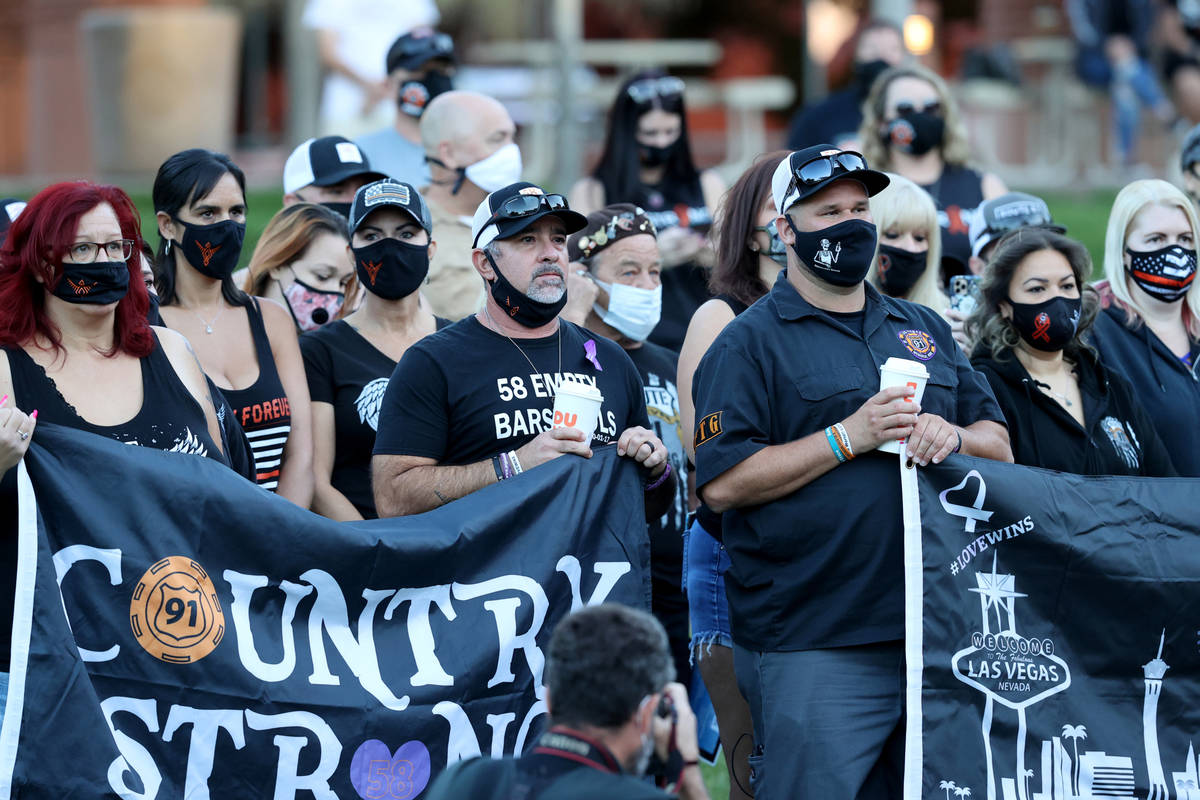 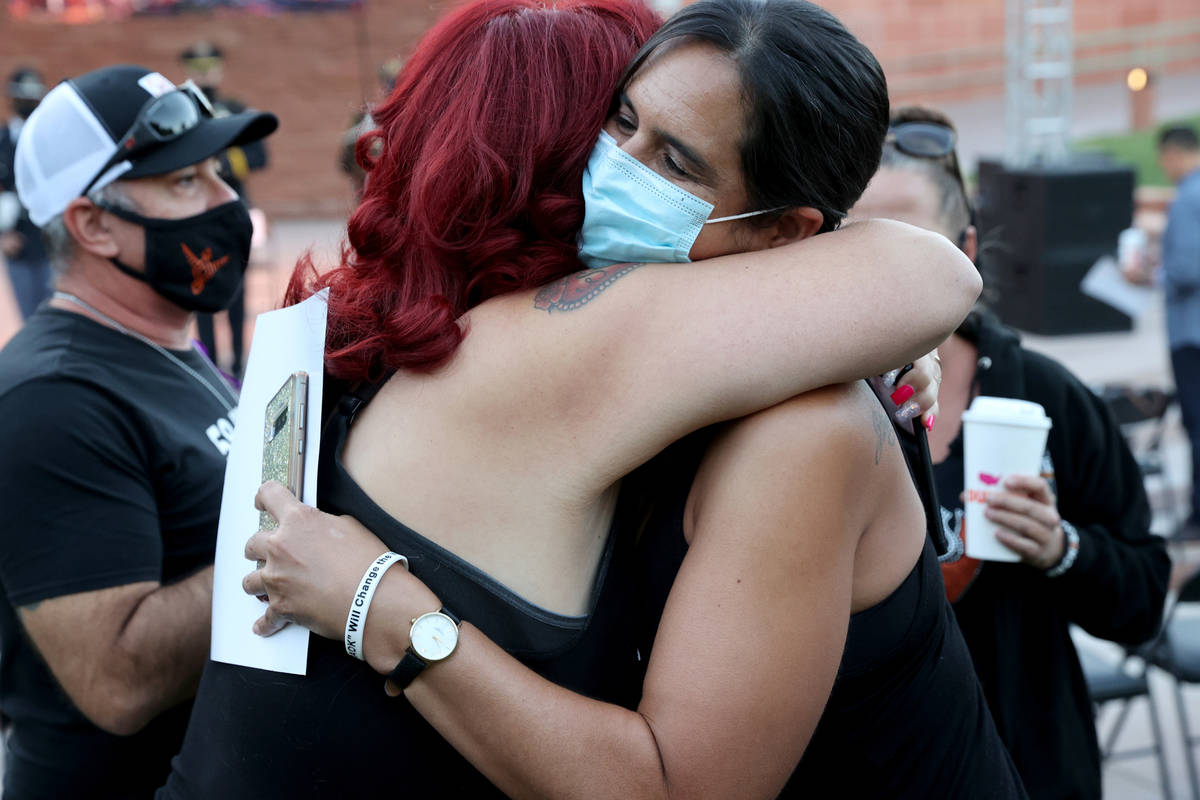 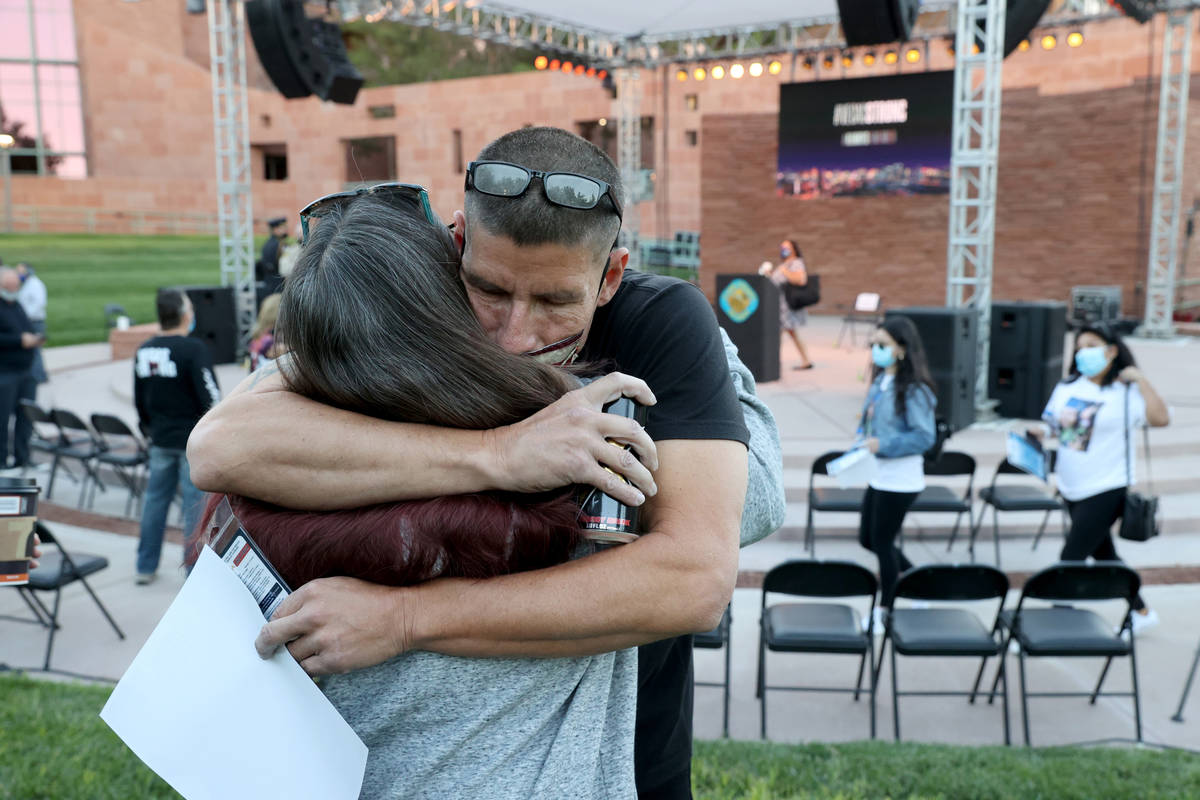 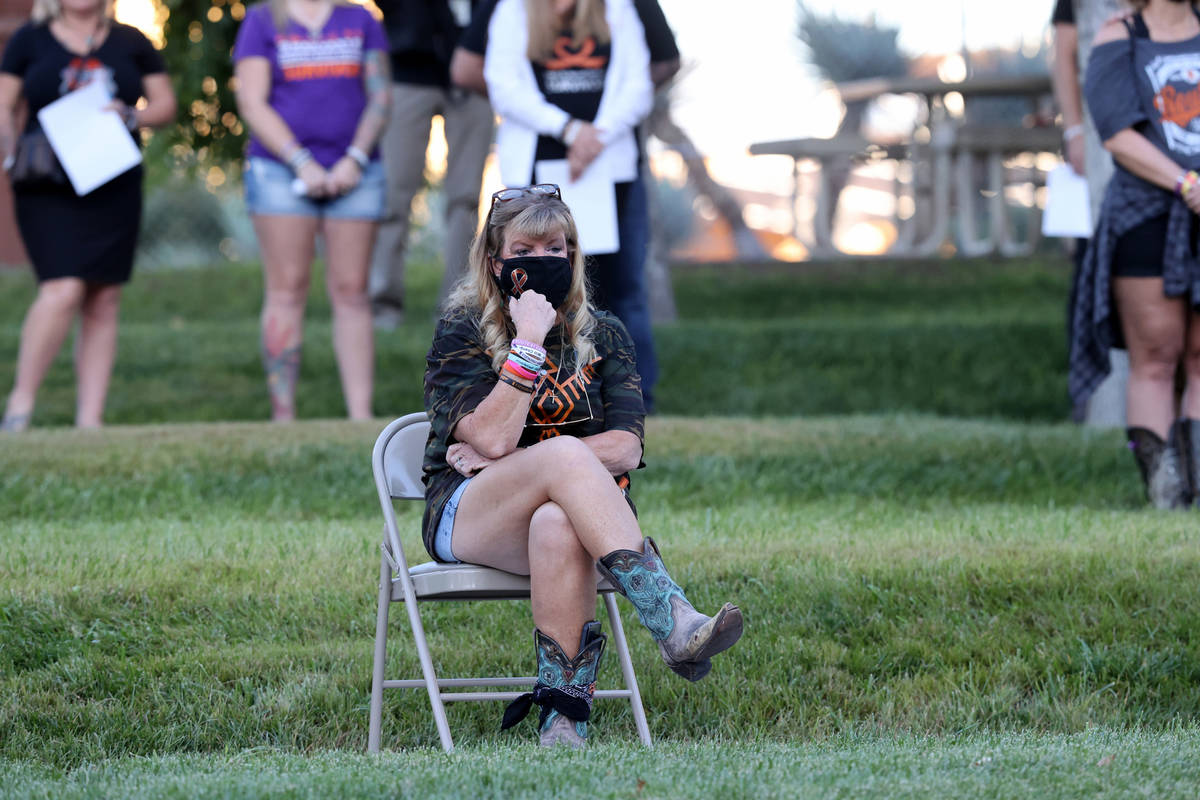 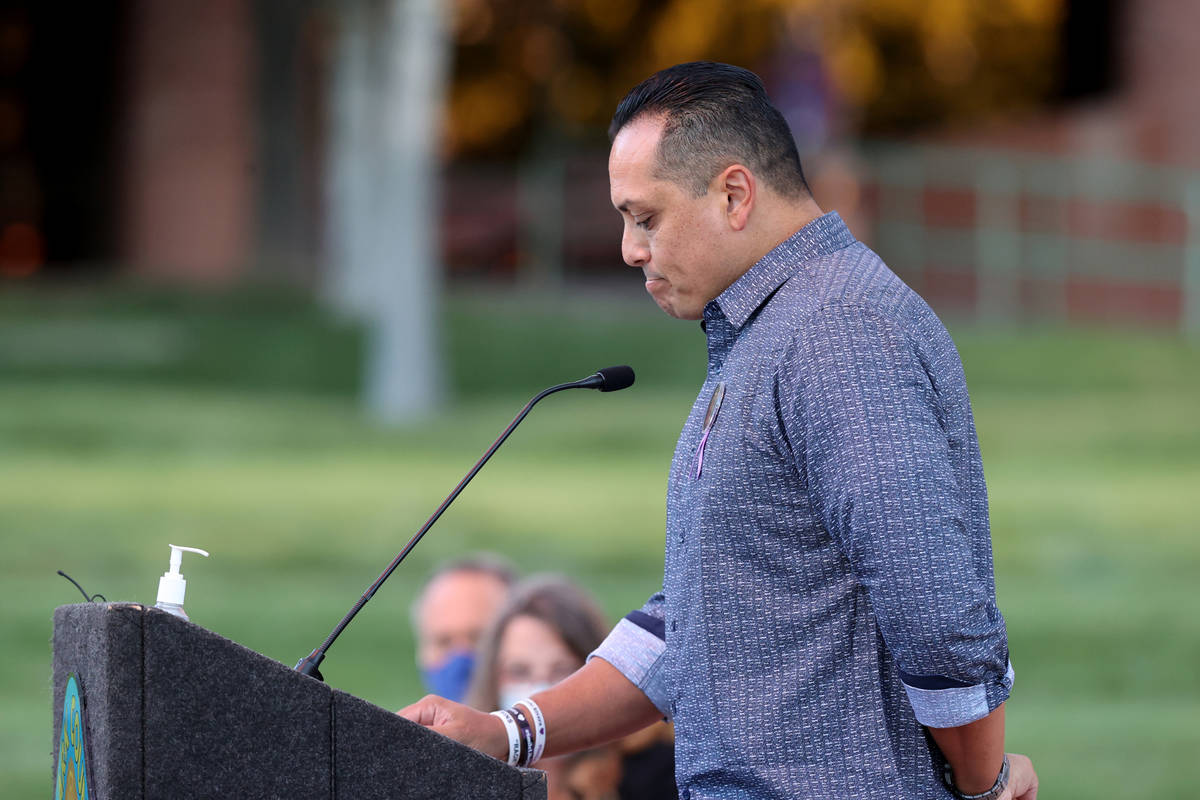 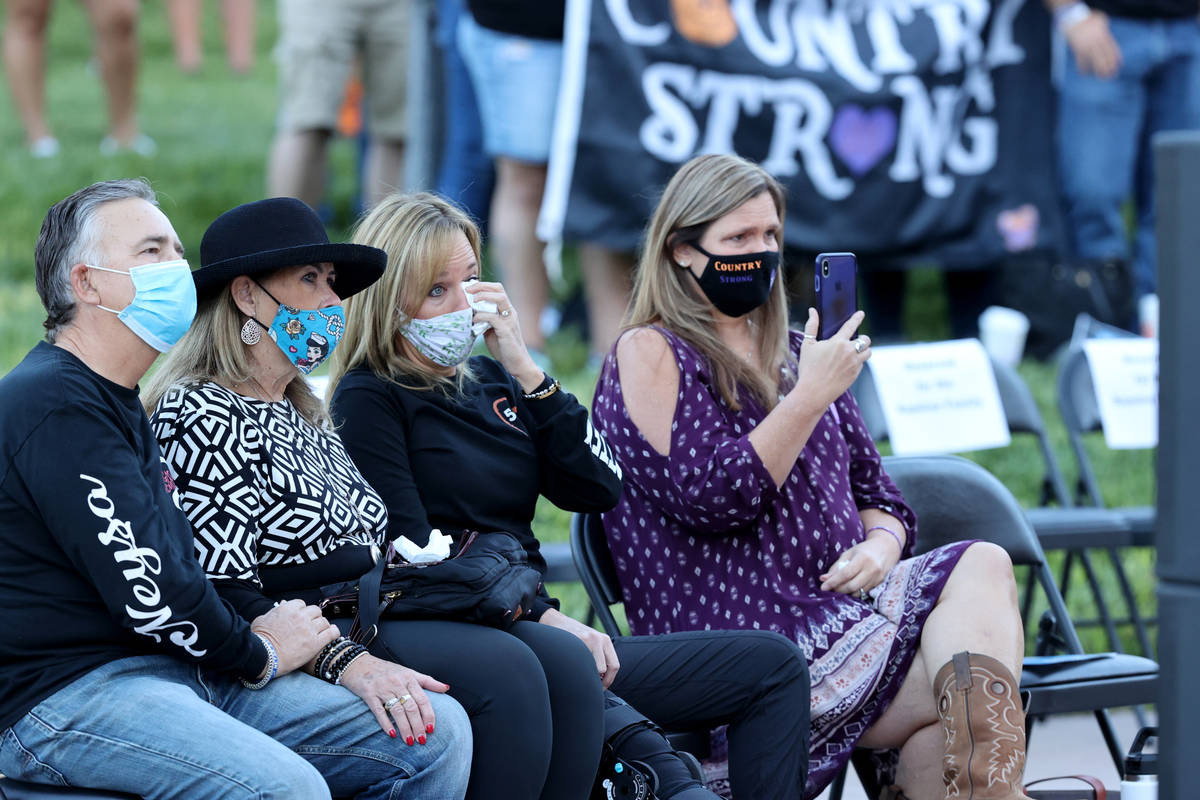 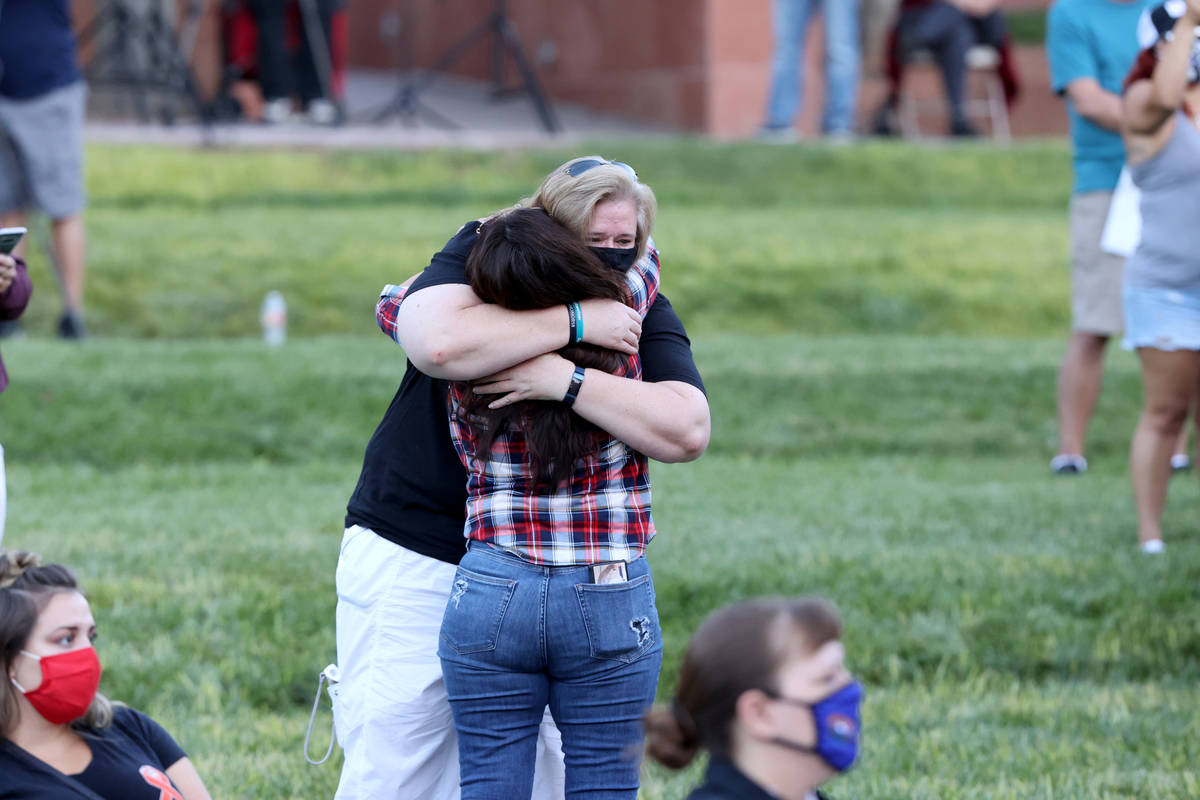 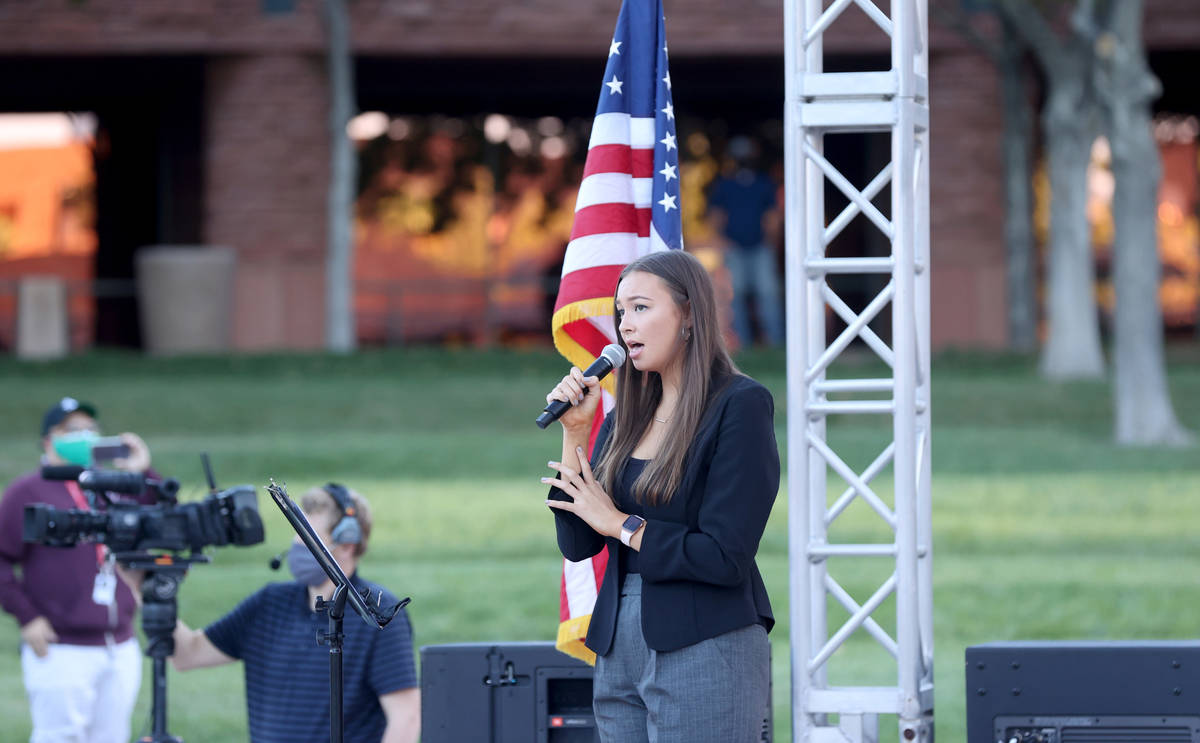 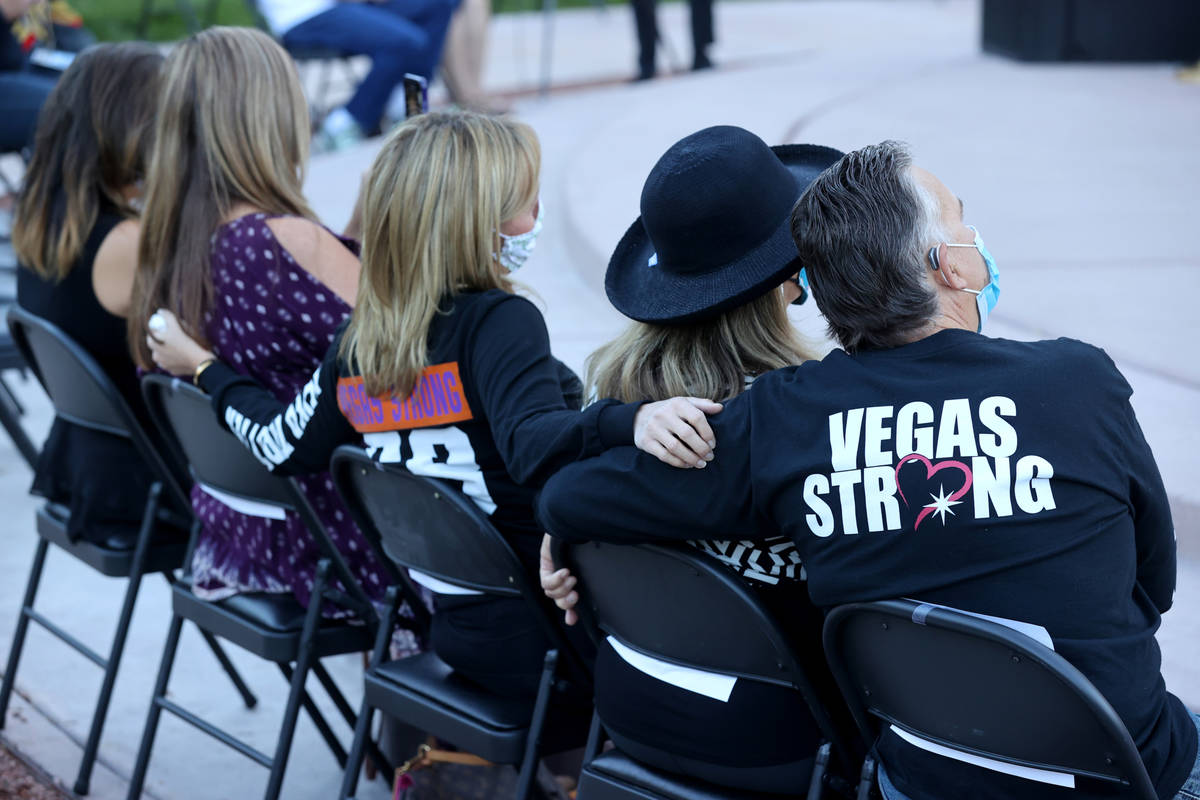 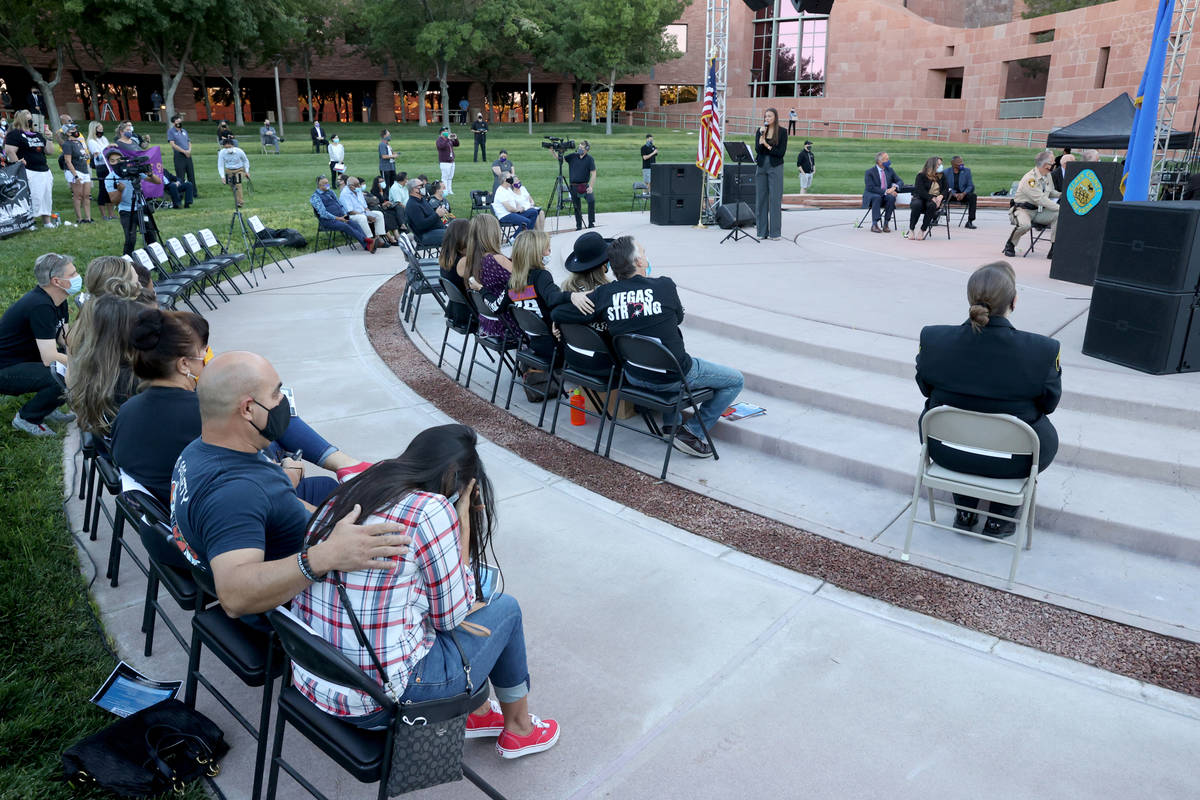 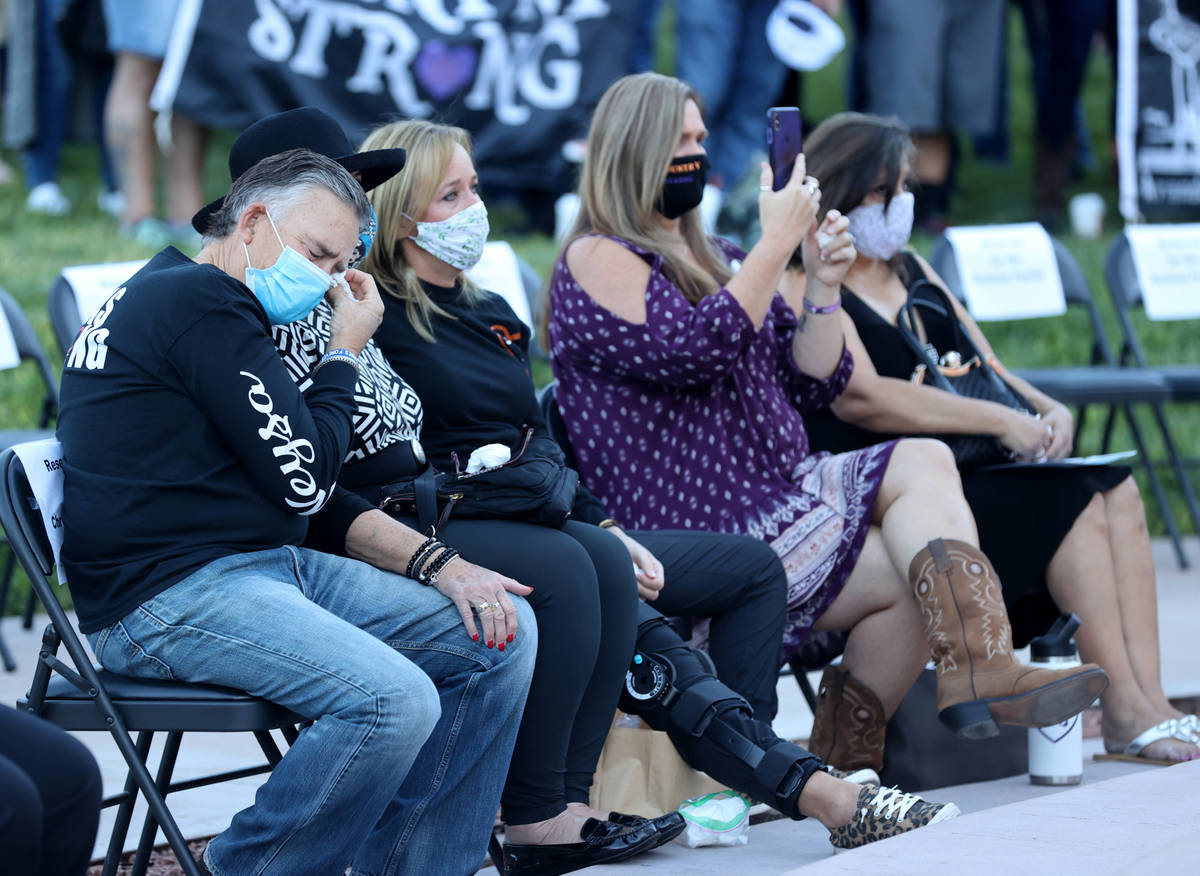 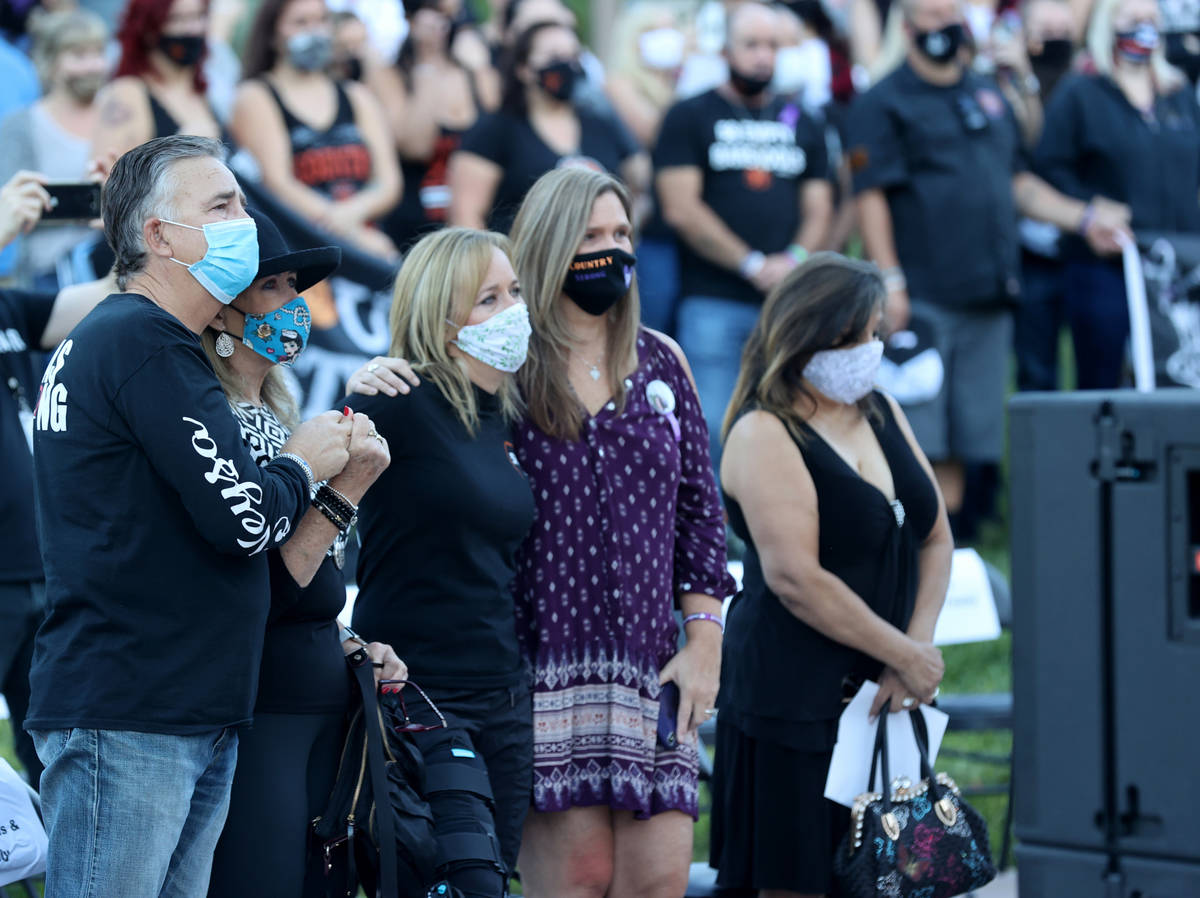 For the past three years, Alicia Soto has traveled back to the city where her life was changed forever.

The emotional scars from the Route 91 Harvest music festival mass shooting have not fully healed, but Soto said that attending the 1 October Sunrise Remembrance Ceremony every year has helped her process her trauma. On Thursday, the 42-year-old was one of about 200 people wearing face masks and standing 6 feet apart in the Clark County Government Center’s outdoor amphitheater for the ceremony.

“That night I lost a part of me, and I come back looking for it,” Soto said, with tears in her eyes.

Since October 2017, Soto has moved from California to Minneapolis and has started her dream job as a flight attendant. She said that she decided to “live life to the fullest” for those who died in the attack.

A slideshow during the ceremony displayed the names and pictures of the 58 people killed that night. The pictures of two women who died within the past year of injuries they suffered in the mass shooting were included at the end with a message reading, “In Memoriam of 1 October Victims Lost in the Last Year.”

At the end of the ceremony, Clark County Sheriff Joe Lombardo announced that the two women, Kimberly Gervais of Mira Loma, California, and Samanta Arjune of Las Vegas, will be added to the official death toll, raising the number from 58 to 60.

The announcement came after the Review-Journal on Monday published an article that highlighted their deaths and reported the Metropolitan Police Department’s initial decision not to include them in the death total.

“It isn’t like we’re trying to avoid the names,” Lombardo said in a brief interview after the ceremony. He later added that, “At this point, I think I’m comfortable in acknowledging that the other two individuals lost their lives as a result of 1 October.”

There were fewer people at the ceremony this year, as the coronavirus pandemic forced officials to limit the number of people who could attend. Gov. Steve Sisolak, who also addressed the crowd, said that when he raised the limit on public gatherings this week, Thursday’s event was one of his “biggest priorities.”

Sisolak’s voice grew shaky as he recalled that night and offered his condolences to the family members of those who died.

Albert Rivera, the father of Jordyn Rivera, who was 21 when she was killed in the attack, said he was thankful to all the survivors who continue to come together on the anniversary and support each other.

“We are all a statistic — we are all part of this unwanted fraternity we didn’t chose to be a part of,” he said.

Rivera also acknowledged Greg Zanis, an Illinois carpenter who built 58 crosses honoring those who died in the immediate aftermath of the shooting. Zanis died in May of terminal bladder cancer, and Rivera said he will “be forever changed” by Zanis’ kindness.

He ended his remarks by calling for unity during what he said has been a time of divisiveness in the U.S. He urged people to remember how they came together on Oct. 2, 2017.

“It’s said that it takes more effort to hate than to love. Let’s remember that,” he said. “Until we meet again — here, there or in the air — may we all smile like Jordyn.”